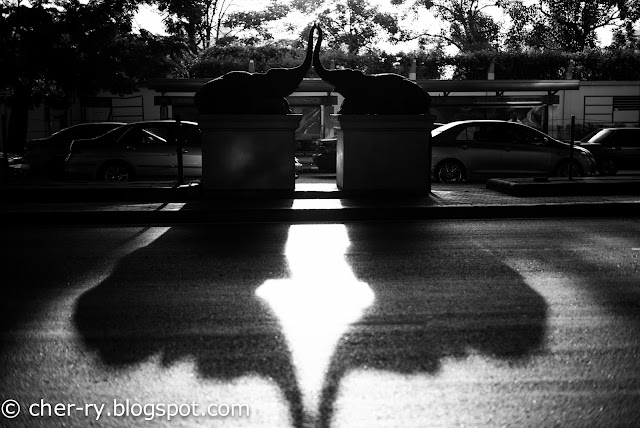 After reading about the works of Henri Cartier Bresson and nearer to this era, the websites of Steve Huff and Thorsten Overgaard, i was inspired to go out to the streets and the right opportunity presented itself in Bangkok or Krungtep Mahanakorn as it is affectionally known to the Thais.

A lot have been said about the Erawan shrine and Wikipedia too has an article on it and I shall not attempt to reinvent the wheel but give my own views instead.

Basically I had to pull myself out of bed on 3 consecutive mornings to be present at the shrine before it became too crowded, soaking up the incense laden air and capturing some of these pictures with my Leica M and no regrets at all. 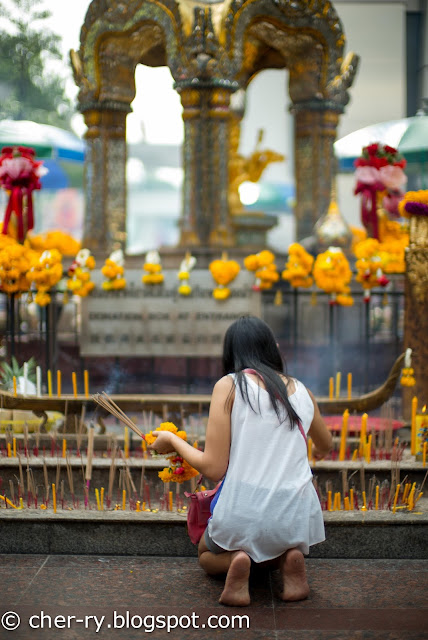 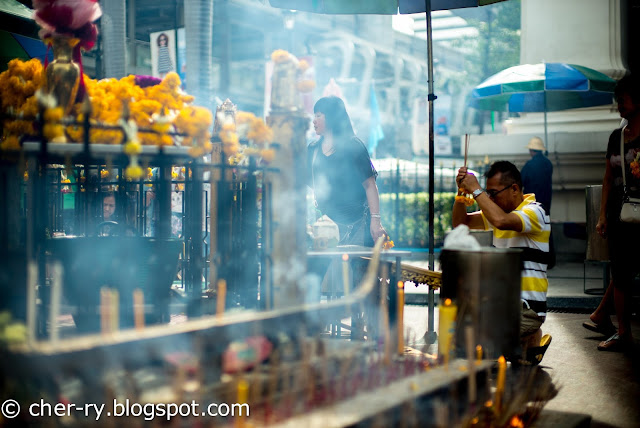 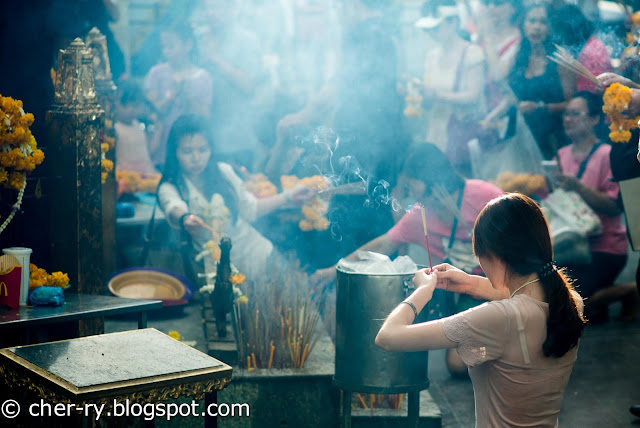 The Erawan shrine or  San Phra Phrom as it is known to Thais is smacked right in the middle of Bangkok at the junction of Ratchaprasong road and Ratchadamri road.

Basically it is only a shrine and not a temple but attract more visitors and pilgrims than most temples in Thailand. The origin of this shrine dated back to mid 50s and was part of the Erawan hotel project to rid the place of bad and evil karma.

Today the Grand Hyatt Erawan hotel sits on this piece of property in place of the old Erawan hotel which was demolished in the 80s and the San Phra Phrom takes her place next to this grand hotel.

Actually the Erawan Shrine is a Hindu shrine and not Buddhist. It depicts the Hindu god of creation Lord Brahma. The four faces of the Brahma god signifies Kindness, mercy, sympathy and justness. In the olden Thai language, Erawan stands for Elephant.

In Malaysia this deity is known as the four face Buddha. Errrr….sorry to disappoint you my ignorant fellow Malaysian…..he is Lord Brahma. 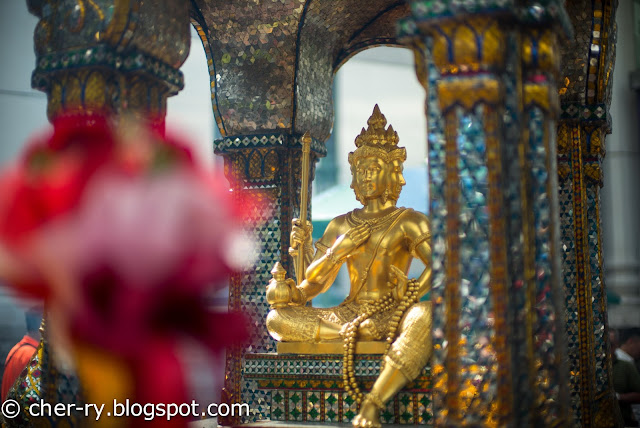 The daily non ending stream of tourist is testimony of the God’s popularity. The visitors usually come to pay their respect and make wishes by making ceremonial offerings ranging from floral garlands, fruits and wooden elephants of which some are as tall as 3 ft, in hope that their wishes will be granted and indeed for many their wishes were granted.

There are many stories (even in Malaysia) of the magical powers of the Shrine. Personally I know a person who was down and out in his younger days but hard working as a greaser boy in a car servicing industry. He came to the Erawan Shrine and asked for a blessings for a better life…..and made a covenant that he will return every year to make offerings to Phra Phrom…..and today he is the proprietor of the biggest chain of independent tyre service centre in Malaysia….believe it or not!!??

Moral of the story is that whilst you have the blessings from the gods, you still need to WORK HARD and handwork doesn't kill!!

In Chinese belief there are always two blessings. One is “teen choi” which is blessings from above or the heavens. The other is “yan choi” and that’s blessings from earth which is translated to “your talent”. The two “chois” have to coexist together for your success……get it??

For one to experience the reverence of this shrine, you can also hire Thai traditional dance troupe and music to accompany your prayers… value added! 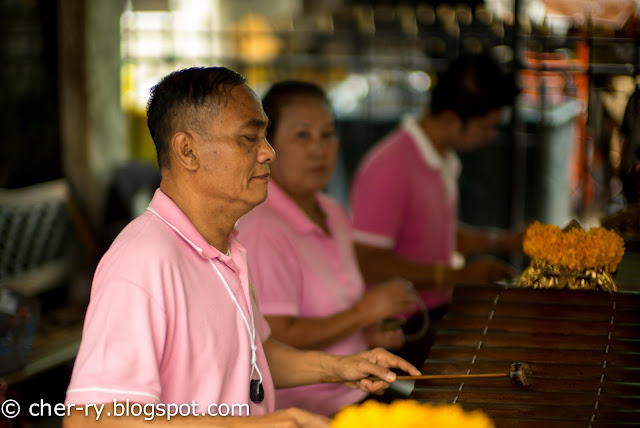 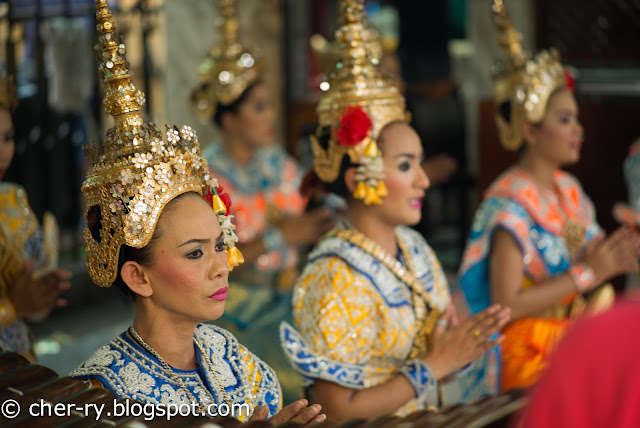 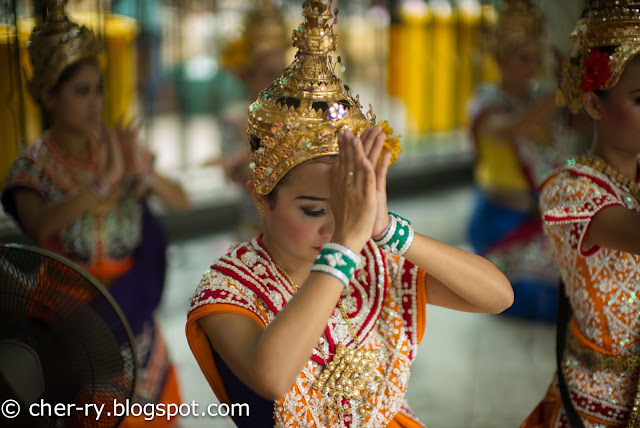 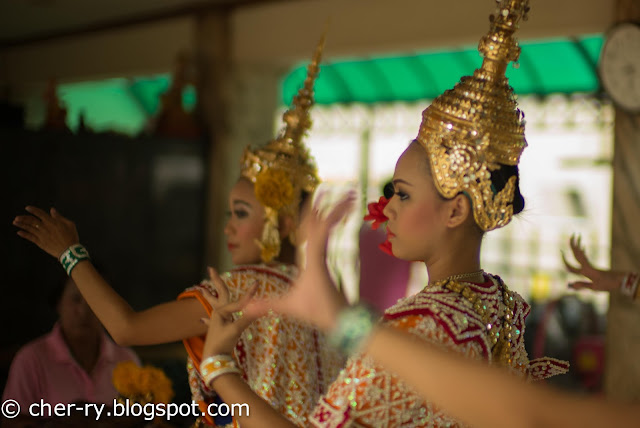 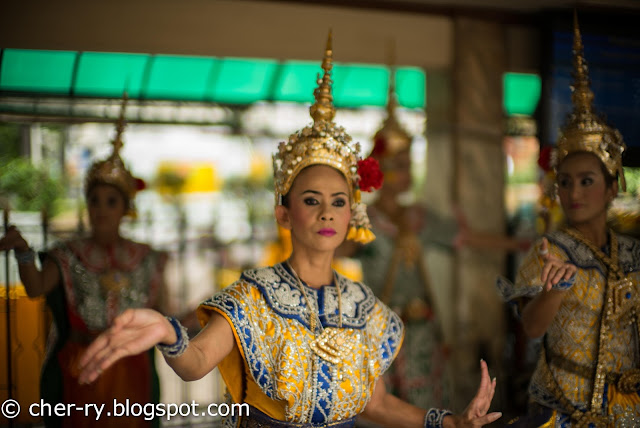 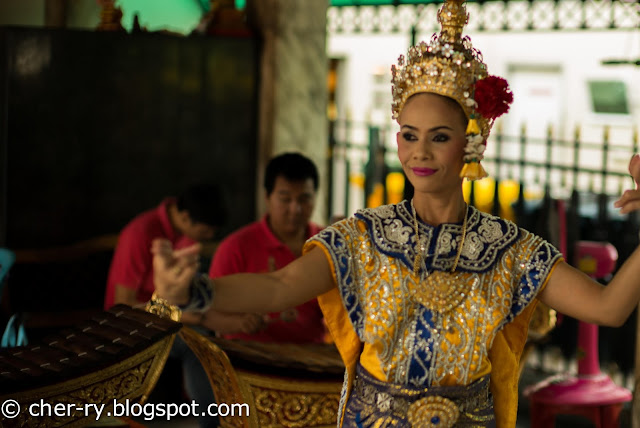 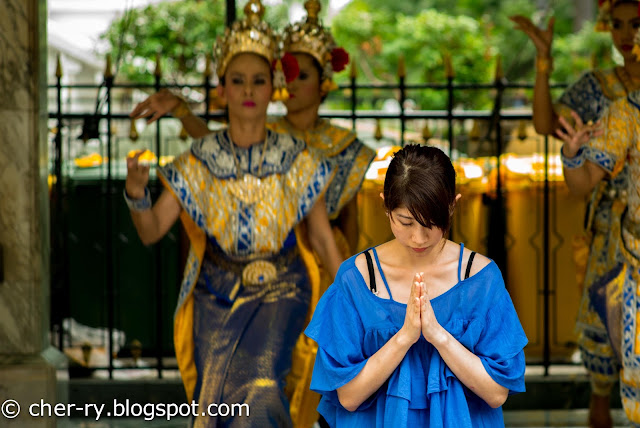 I always wonder what do people wish for when they come to pray here. Young gals probably pray that they will find a good husband and young man vice versa.

The poors pray for a better and more comfortable life. The weak and sick pray for better health. What about the rich?? What about the healthy?? Guess it’s never enough of what we have and no matter how rich or healthy we are, they are always more material things to ask for. That’s human nature I guess......never enuf! 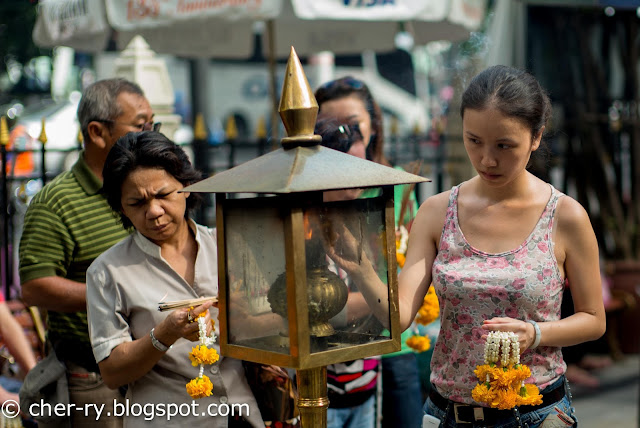 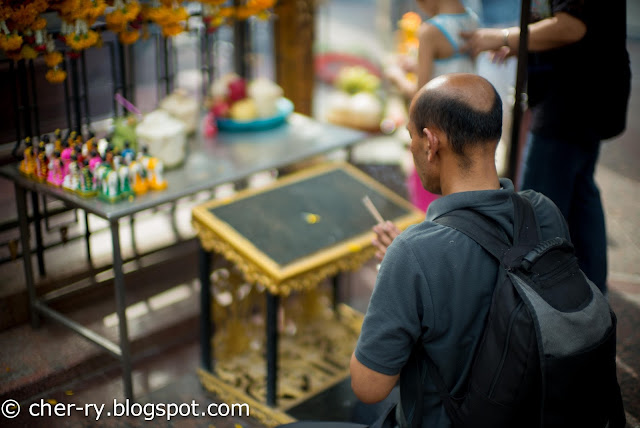 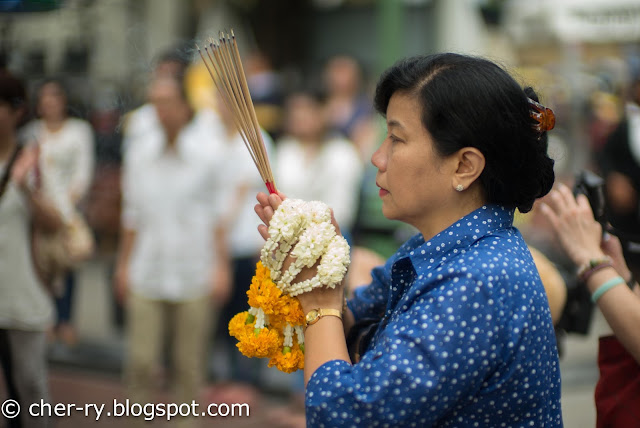 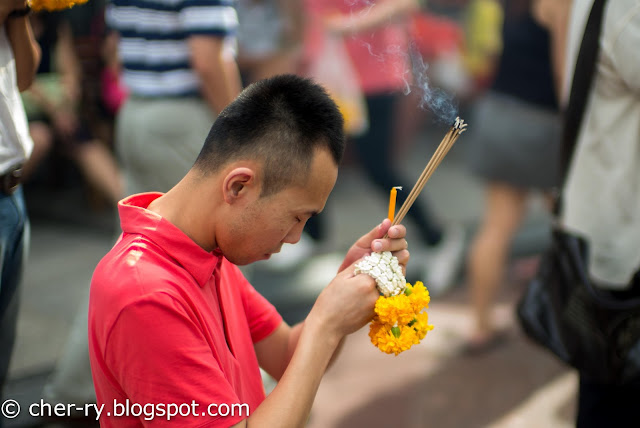 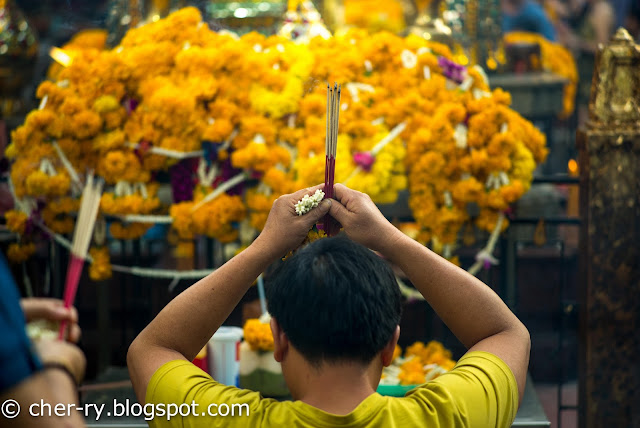 It is not uncommon to see a person walk by the shrine with hands clasp together and head lowered as a symbol of respect to Phra Phrom.
Even passengers on a motorbike do so!! 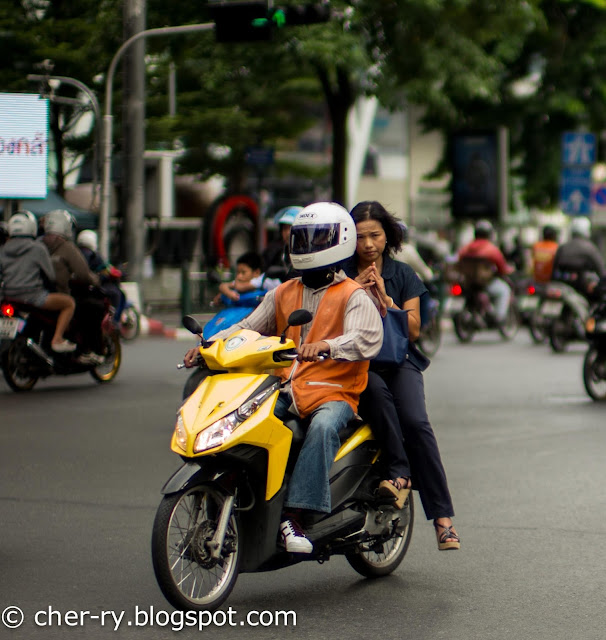 Since this shrine’s popularity has soared ever since it was enshrined (for the second time after it was vandalised in 2006), secondary industries have also mushroomed around it.

Nowadays vendors selling items ranging from drinks to flower garlands and street food litter the pavement around the shrine. 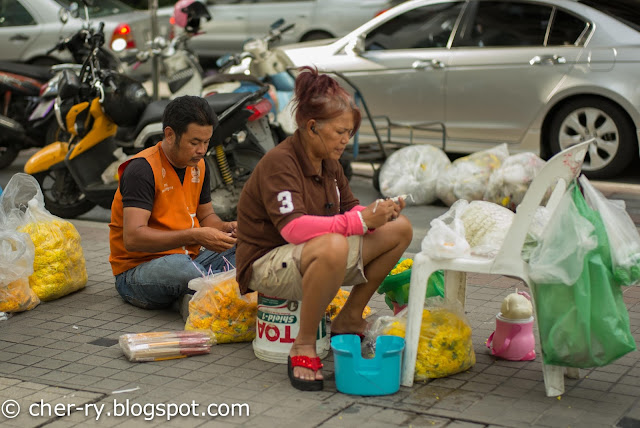 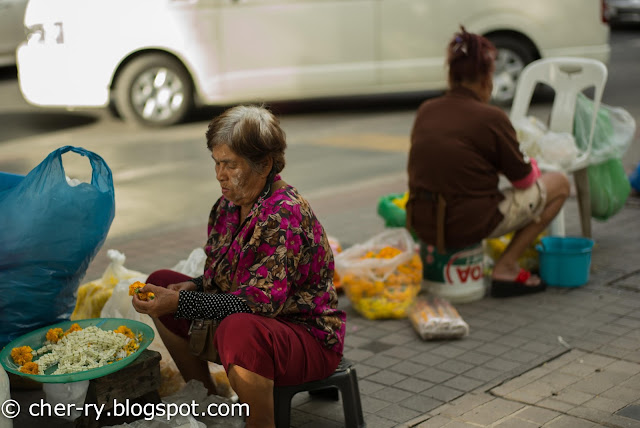 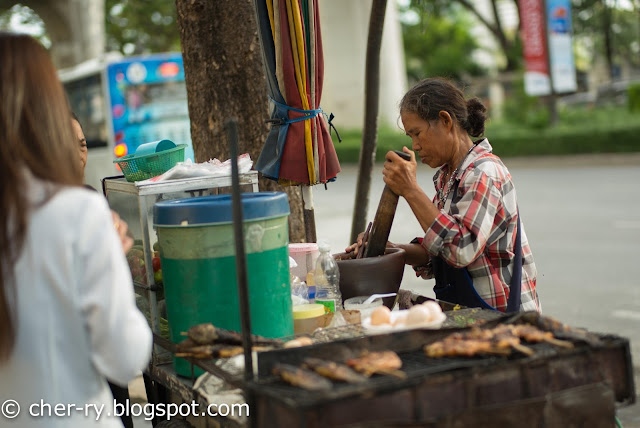 The motorbike taxis and the Tuks Tuks sure know where to hang around. 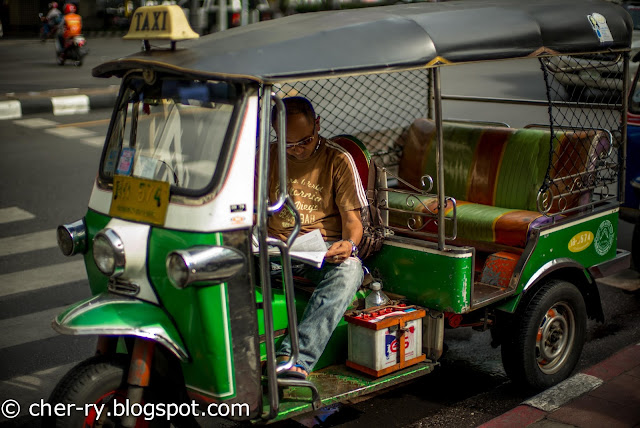 There was even a lady selling live birds for worshippers to buy and set free and in  accordance to Buddhist beliefs, it’s good for your karma cos you are doing good.

I guess all religion preaches about goodness and doing good……it’s the  misinterpretation and some government that used it to their political advantage that cloud our judgement about religion!! 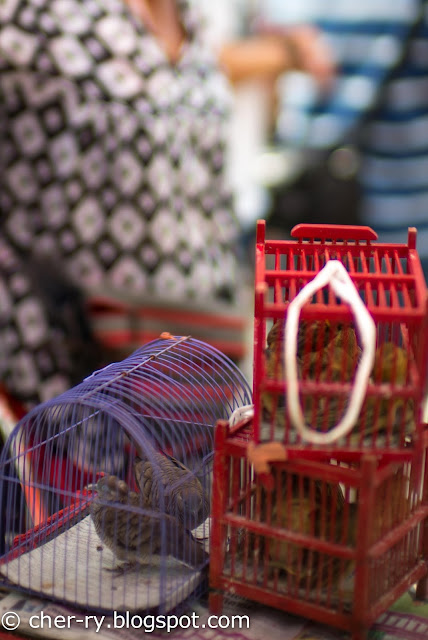 Last but not least, there is this guy who has literally become a permanent feature around the shrine. He is a lottery seller and because of the good karma and aura that engulf the shrine, well wishers and worshippers have been known to strike lottery (after buying from him) after paying their respect at the shrine! 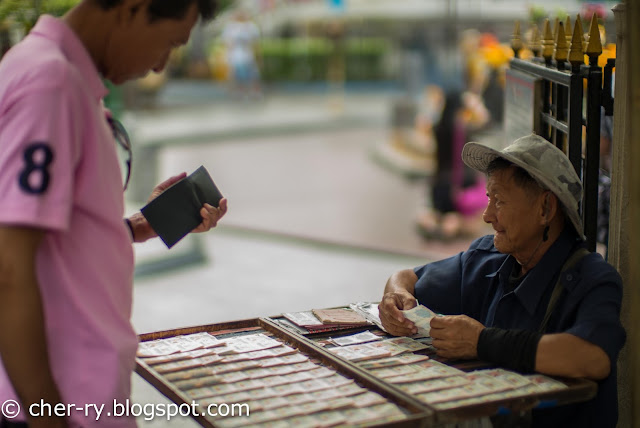 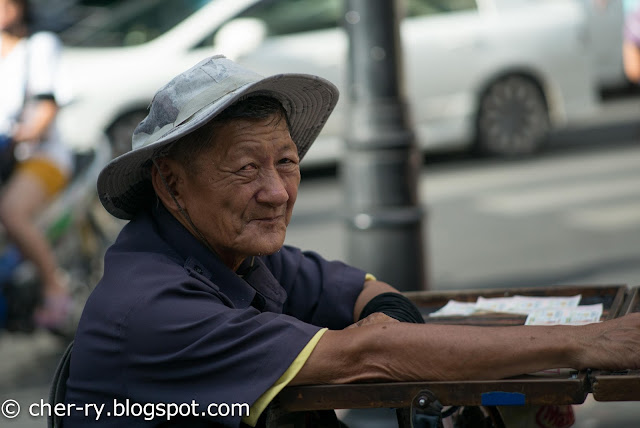 A weathered beaten face probably resulting from a hard life......and that distant look in his eyes......may I know what's on your mind sir?? :)

PS: all the above pictures were taken with a LEICA 50mm Noctilux f0.95 and 50mm Summilux f1.4. I tried to keep the aperture at the widest possible at all times.

so it's not a Buddha??? aiks..all these years I thought it was 4 faced Buddha...*smacks forehead*

I have so many favourite pics in this posting. Great Job JS!!!!

Well said, and great pics!!! I can see the interpretation of your photos of different aspect of social layers, its connotation of religious role in shaping the devotees and well wisher, and the community tat play a part.

Thank you anonymous for dropping by. So Glad you like the
Pics. Kind Rgds.