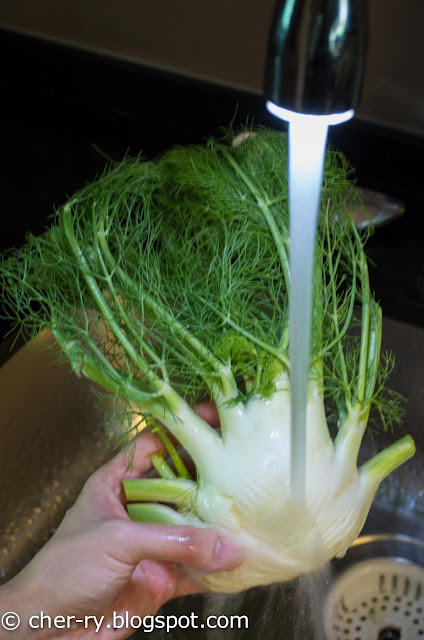 Beautiful Glorious Bulb of Fennel
I really do lurve fennel for its fresh anise aroma but a certain Si Fu hated it. He even banned Monkey fr ordering it at a restaurant. -_-" Speaking of men being drama.

Having just declared my love for fennel, I actually hated Absinthe. Originated from Neuchatel, Switzerland it's like their staple alcohol. The main ingredient in Absinthe is actually our dearest friend Fennel...hahahaha...I recalled downing shots and shots of absinthe in madness. Blame it on school....stress....school stress...... for Monkey was back to watchmaking school then.
*read about it here*

Jamie O's style of cooking was just simplicity, fresh ingredients, fuss-free, wham-baam, healthy and most important of all....it's IDIOT PROOF!!! I really needed that!!!! which also confirmed that it's failed proof. So armed with only memories of the short programme I've watched, Monkey was so inspired to cook Sunday Brunch for Mr. JS and he was.....very and extremely skeptical.

Monkey: "Ok no worries....don't fret urself. If it's inedible, I'll promise to bring you out for a mean brunch of your choice."
and the poor man sighed a heavy relief and soon colors returned back to his face.
yes Men are really DRAMA. 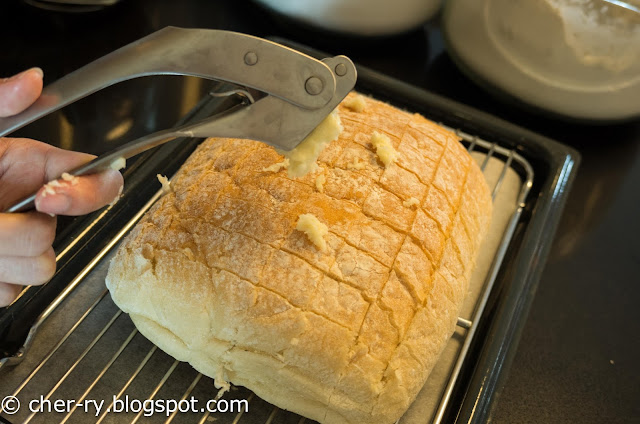 The recipe starts off with cutting your ciabatta criss cross like this. Quickly wham one or 2 cloves of garlic with the greatest invention ever - the garlic smasher!!!!

*Punch Punch* just like punching holes on your A4 papers...my specialty hohohohohoho.
depends on your tolerance of garlic....if u lurve it put more...otherwise use sparingly. 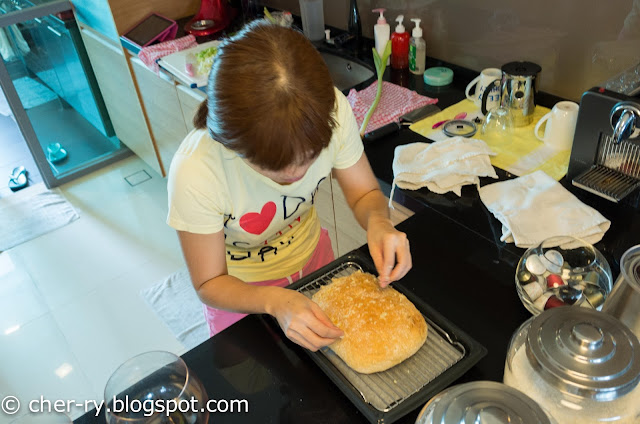 and JS who just woke up.....ok ok it was ME whom just woke up.
JS woke up 3 hours before me and he's been fiddling with his new Leica camera the entire morning until he was so hungry and came to bedside...."when is Brunch gonna be served? I am hungry....." 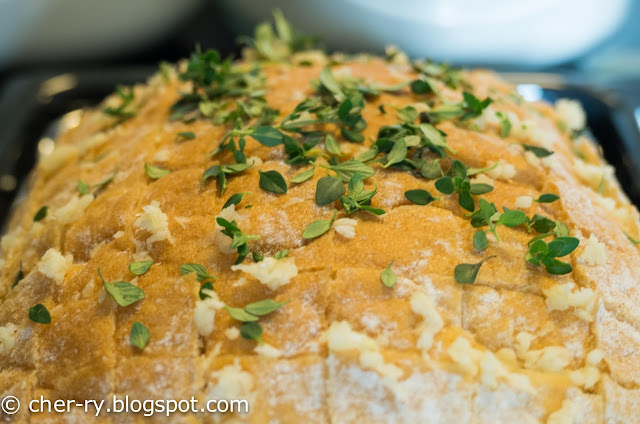 Then as alwiz, Monkey forgot....to add lemon thyme!!!
and off it went on top.....so easy to use. Just press the end and pull ur fingers through its tiny stem and all its beautiful leaves will fall into place....

At that moment, I felt that I'm doin a pretty decent job as JS was maneuvering around me looking pretty skeptic.
Monkey: "I know wat I'm doin...CHILL!!!!" and continued to la-la-la-la-la-la

spread the garlic and lemon thyme evenly....drizzle some olive oil and wham it into the oven at 150*C. You just need to crisp and brown up the ciabatta so if u are worried, u can set the oven temperature lower. 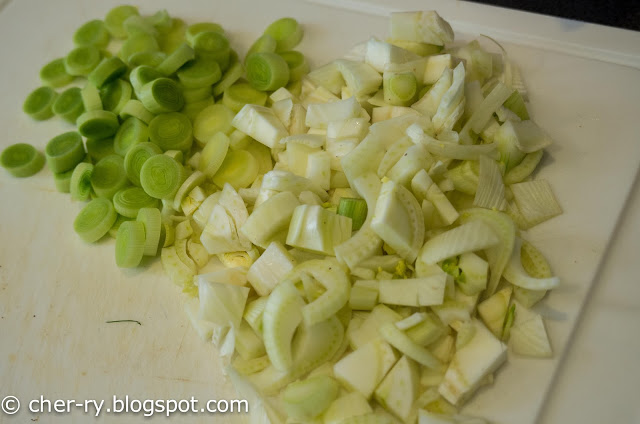 Then the chopping frantic began!!!
chop-chop-chop-a-chop

Chop any way u want but the above size is good. I don't recall the recipe used any leeks but we lurve leeks so I've chopped one and cut the fennel about the same size as the leeks. So they'll cook in uniformity...oh just about right... 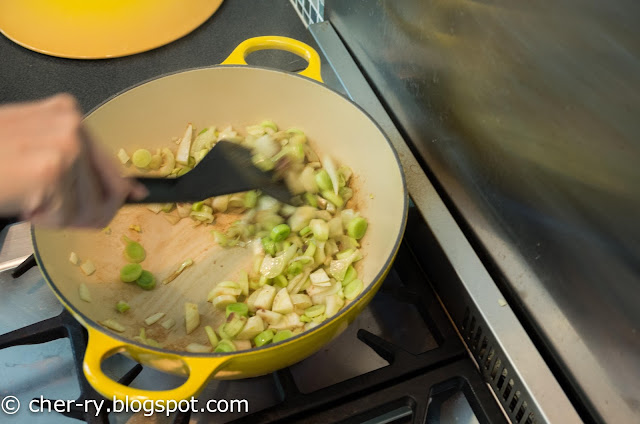 Heat some olive oil on the pan, Monkey used a Le Creuset cast iron Braiser in mustard color.
sorry I'm such a bimbo, even cookware must be pretty. But seriously Le Creuset is a very good investment and so easy to clean :))

after it's heated, throw in some anchovies. I've used about 3-5 pieces, can't remember coz I was in a rush....just throw everything in with feel. While JS was busy kacau-kacau moving around Monkey snapping pics. He was so excited that I AM COOKING!!!!!

stir fried them for a bit then throw in a good splash of white wine. About a glass.
Monkey opened the fridge and saw a bottle of french white wine...
"Can I use this?"
JS was.."errrr..errrr...."
"Ok I'm using it....if it's half opened and u are not serving it to me, it's gonna go into the pot."
JS >.< hu hu hu hu hu hu

Cook the above for a bit until the liquid has reduced for a bit...... 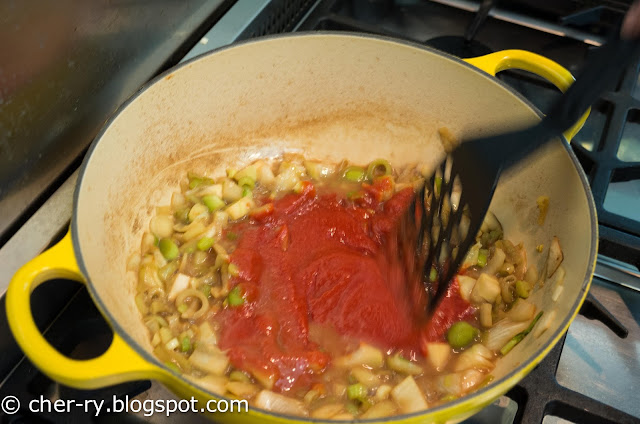 Open a can of good quality tomato puree. Pour everything in...and using the same can, pour some hot water innit and add it into your stew. 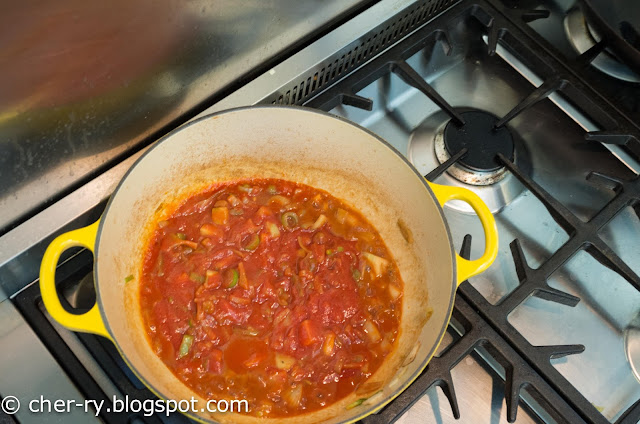 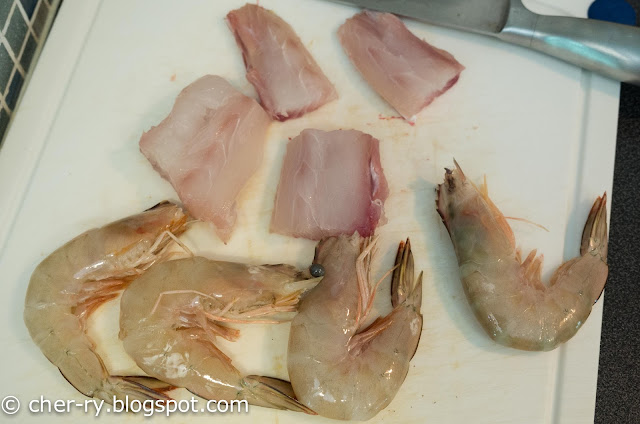 Cut your fish. Clean your prawns... 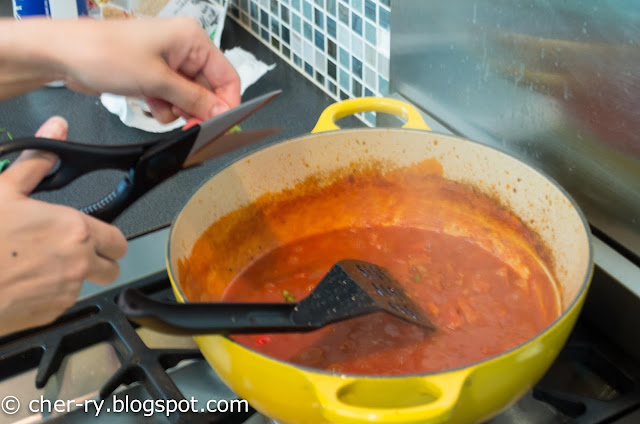 we lurve HEAT
so snip snip snip some bird eye chilli into your stew. I seldom cut my chili with knives..it's usually the ever reliable scissors. 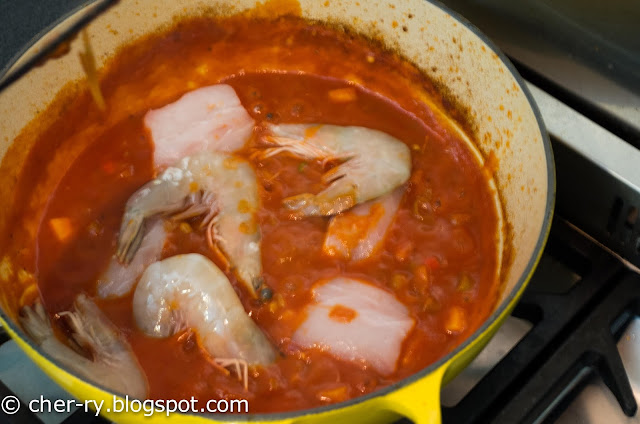 arrange your prawns and pieces of fish into your stew 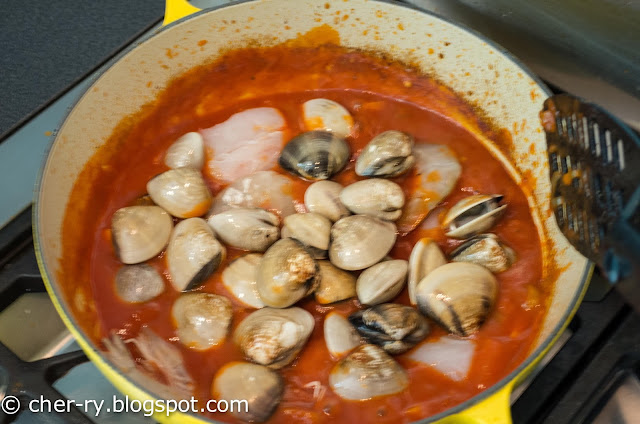 to clean clams....put them in a nice bath of cold water + salt.
This is to give the fresh and ALIVE clams the illusion that they are still in the SEA. So then leave them in their lala-land of salt water and soon u will see them spitting out sand and water at ur face!!!! hahahahaha.

Cover the stew and turn the fire to medium or low. Since Le Creuset cast iron retains a lot of heat, I've left it at low fire. 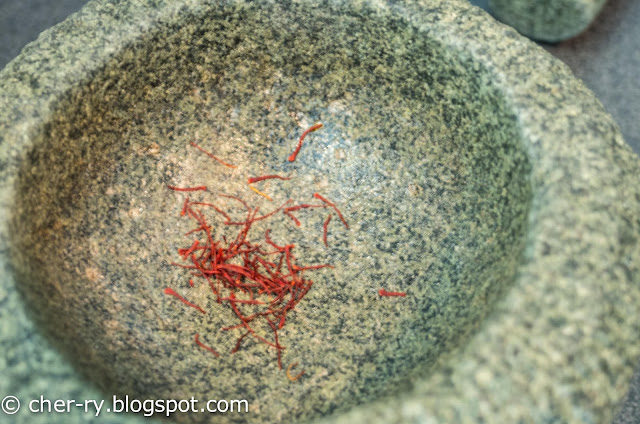 While waiting...in fact there's no waiting in Jamie O's 15 minute meals recipe....u gotta go boom-boom-boom wham wham wham the moment u start any of his recipes.

Get a good pinch of saffron onto the mortar. JS got this in Seville, Spain. Or was it Granada?? I can't remember....it's really high quality ones. 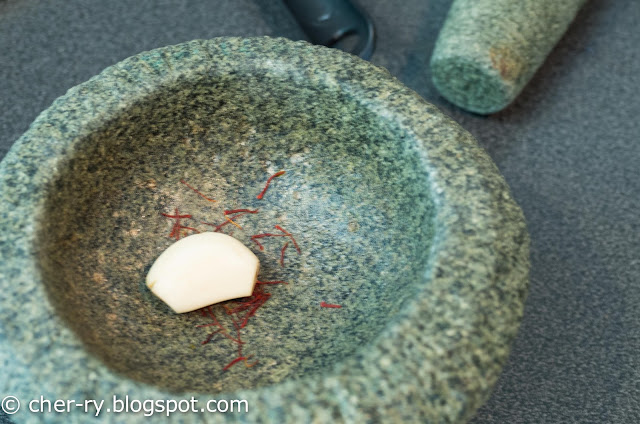 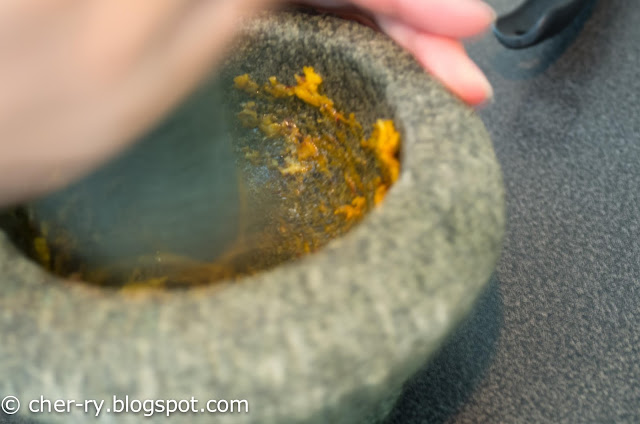 Ka-baam-ka-baam ka-baam
oh the smell of saffron was so so so good!!!! 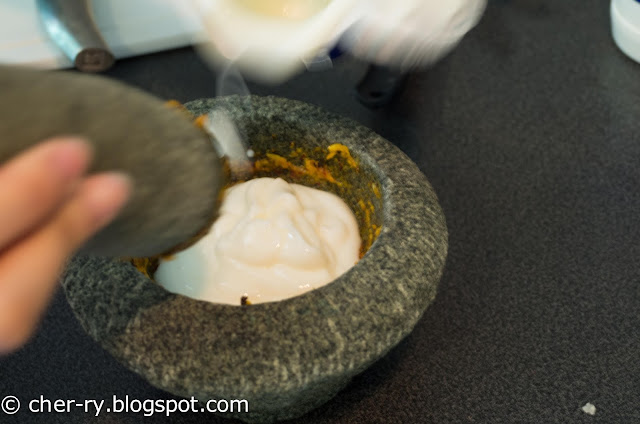 Pour in the low fat light yogurt in 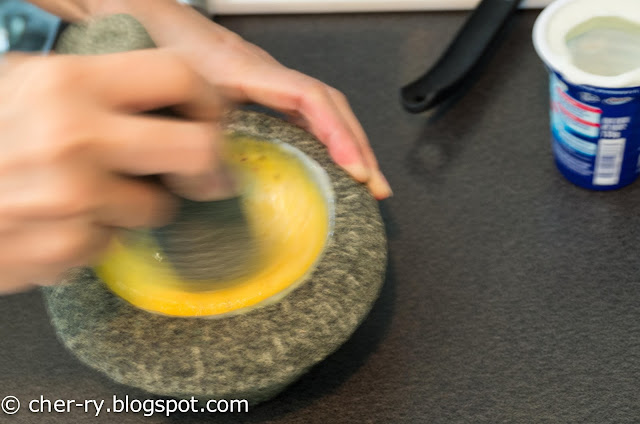 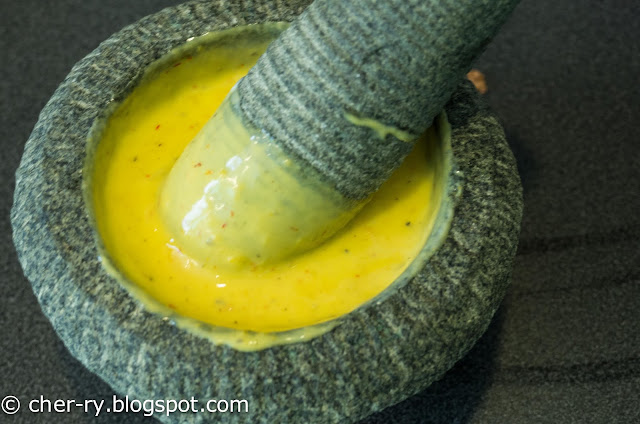 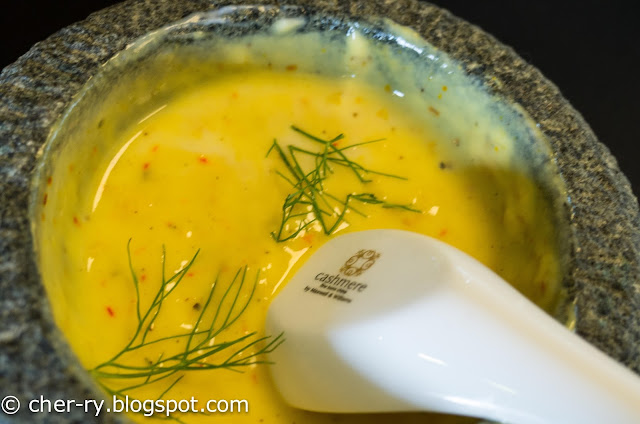 remember the fennel bulb earlier? it has got the beautiful feathery leaves...
throw them in :))))))))))
and a beautiful aioli is done!!!! 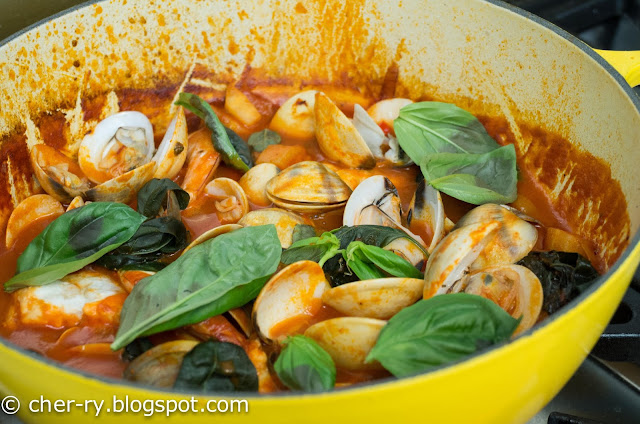 By this time, your stew is so so so ready
pluck some basil leaves and throw in!!!
if u really love basil, u can even put them during the cooking stage. 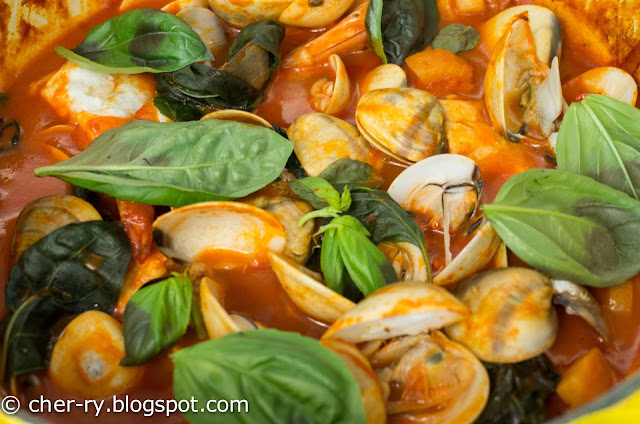 The clams have opened, the fish and prawns are cooked
the smell was enuff to murder all my neighbours for I am sure they are hungry like JS too!!!!
hahahahahaha 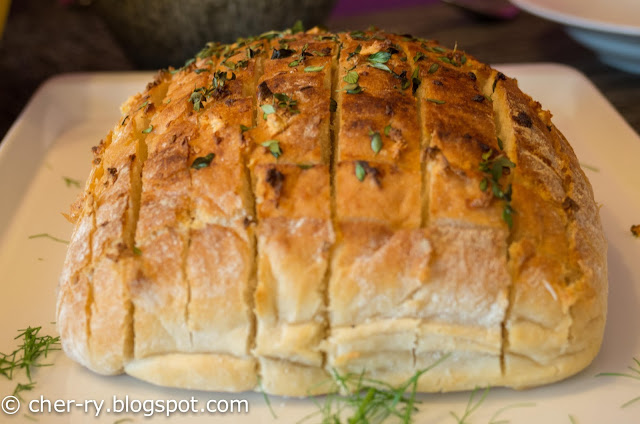 Get the bread outta the oven 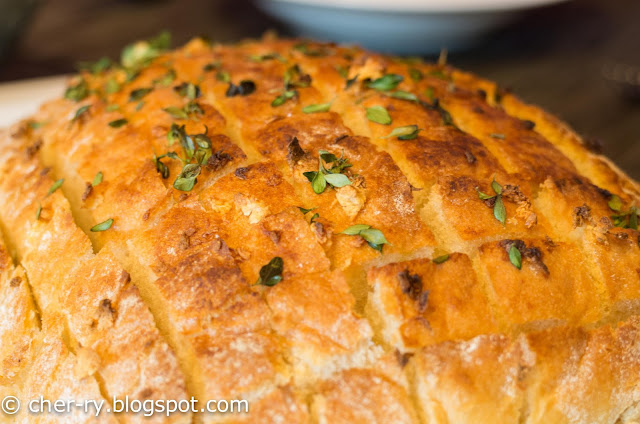 hot fluff and crispy on top
it looked like a hedgehog to me!!! 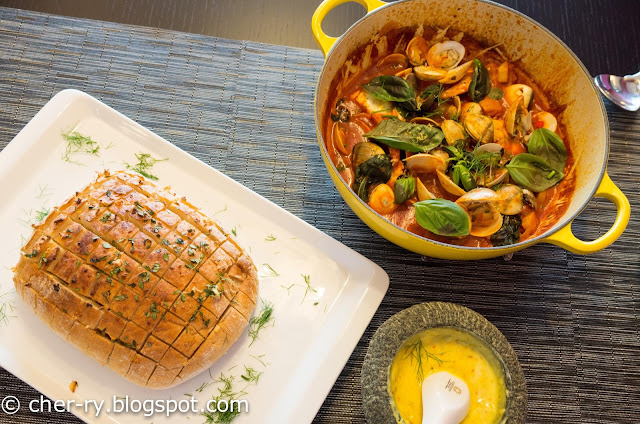 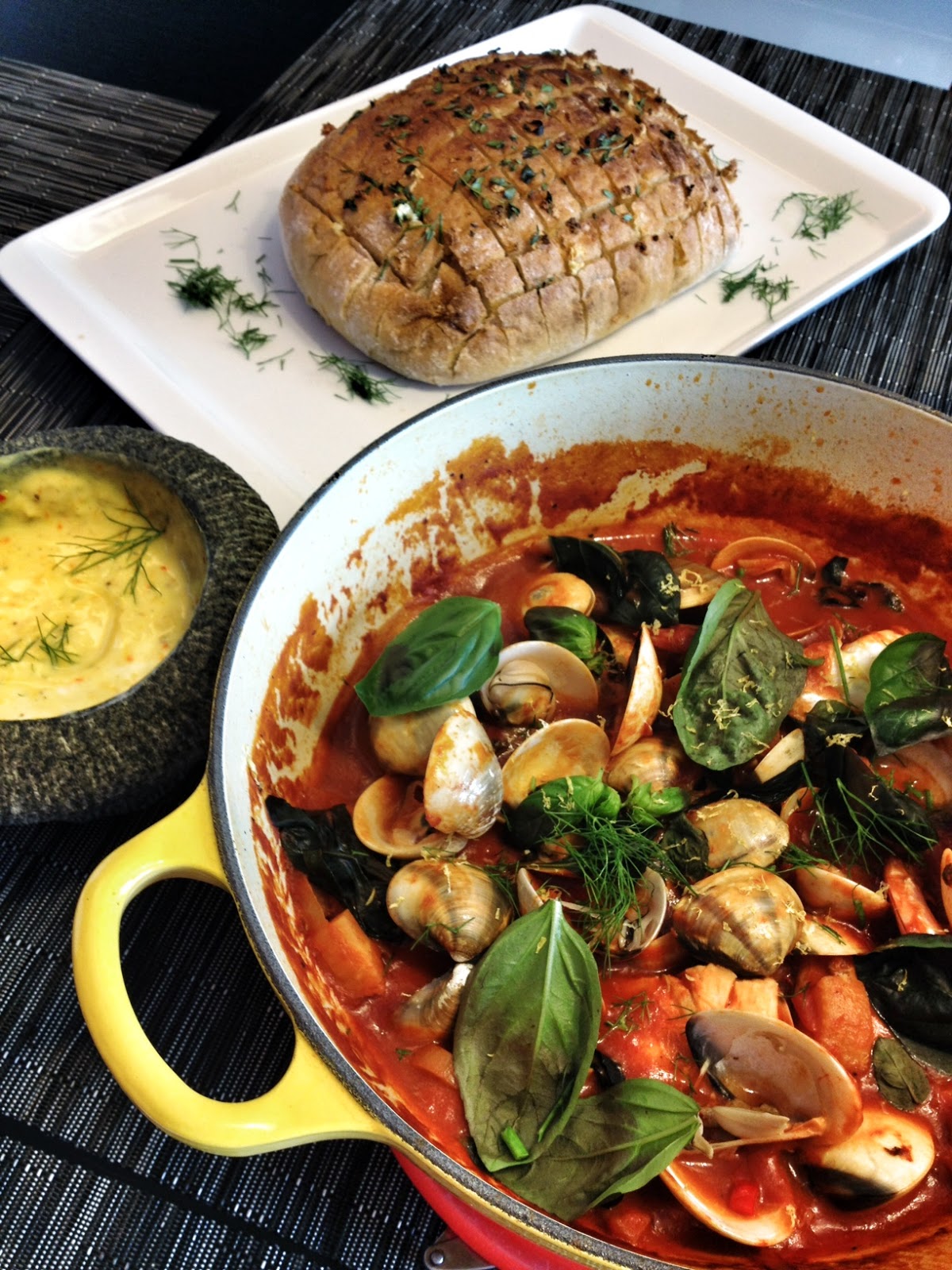 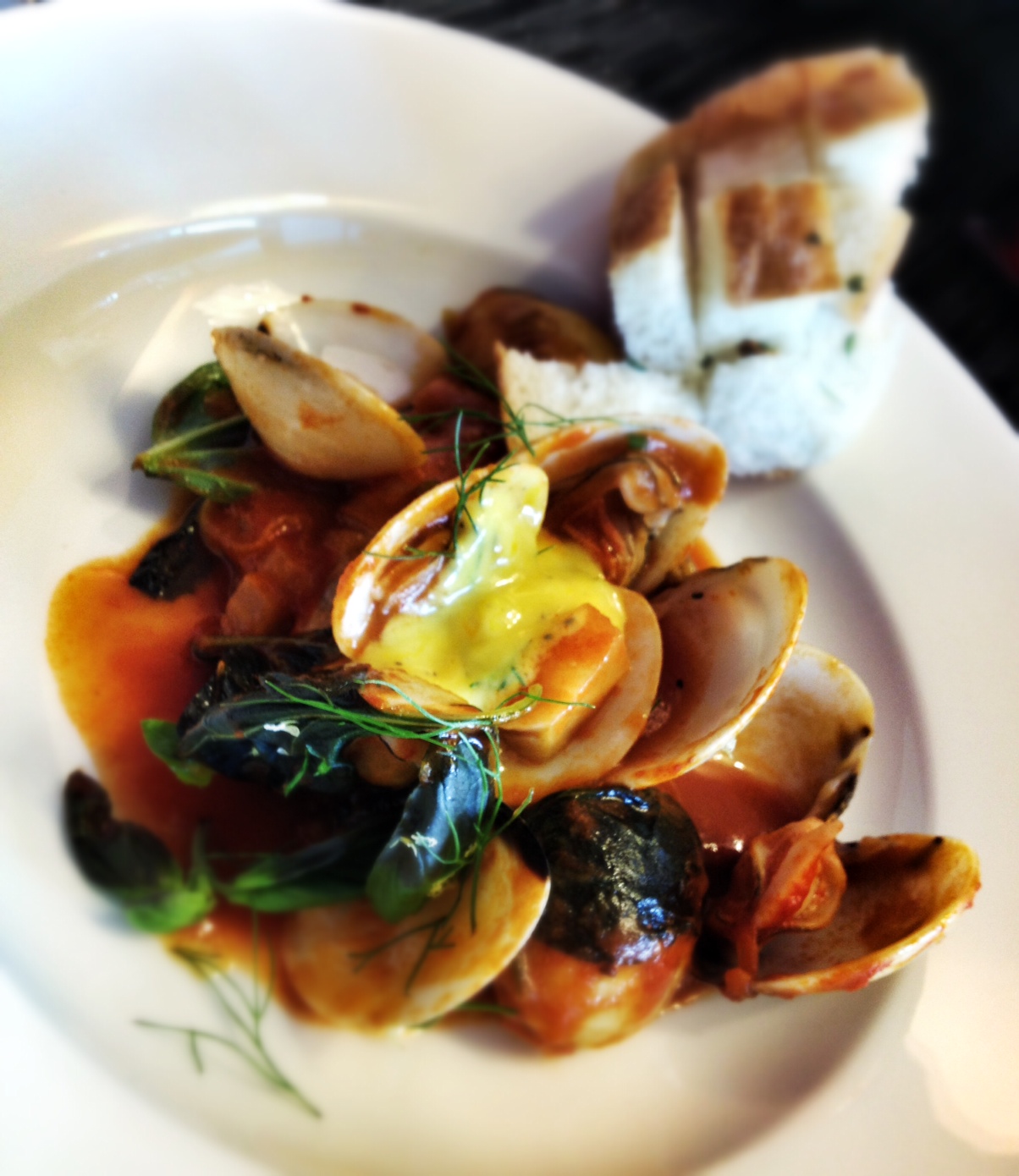 scoop some fish, prawns and loads of clams...a dollop of aioli
and open ur mouth!!! hahahahaha

this is really good. Do give it a try.
For the recipe, go *here*
but I reckon u just watch the video *here* coz I didn't refer the recipe and just cooked fr wat I saw in his video. Maybe that's why I missed so many things and steps....hahahahaha.

simply fabulous! even the bread looked sooooo good... you make me want to cook this now too... waiting for your next Asian Beef Salad :)

omg! that pot of stew really irresistible lor. *thumbs up*