of Great Terroir by Ulysse Collin 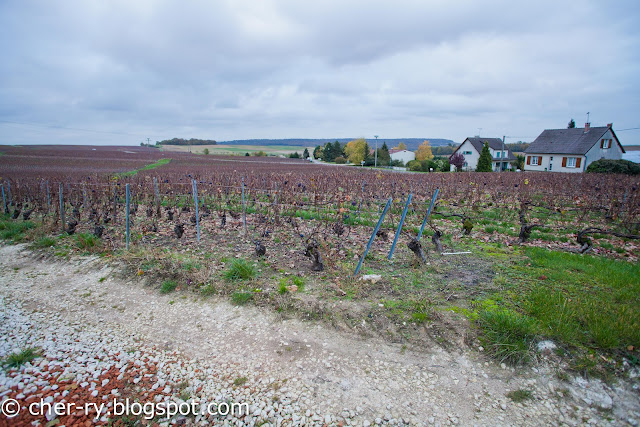 It was another cold windy late autumn day and we were rushing from one champagne appointment to the other. Glancing through my appointment list the name Ulysse Collin appeared and memories of his champagne brought great memories. I don't know if it's the bottles and bottles of champagnes consumed since 9.30am playing up in my mind and body, or I was just feeling emotional.

The drive was pretty long from Reims to this unknown village down south by the name of Congy. With a population of 350, u have no idea how small this village is.

We drove and drove and thought we were almost lost. Trusting the GPS to go straight ahead for kilometres we drove with high anticipation. The fields were of vineyards with nothing else as far as the eyes could see on the horizon. What a beautiful sight~~~~ I think I can live here.....definitely. 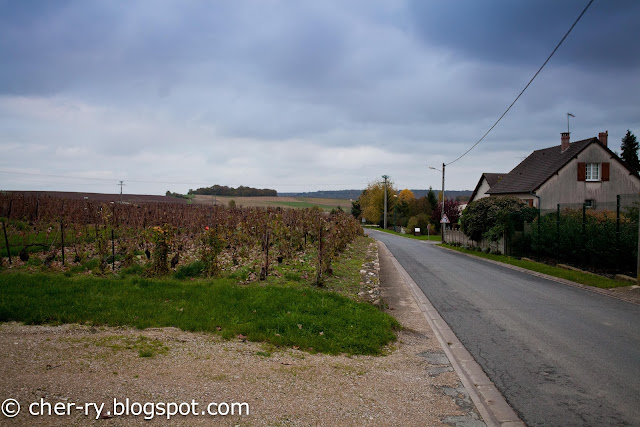 Finally we reached the village of Congy...drove one round and still couldn't find our destination bcoz mind you. Mr. Collin's home sits on this street that wasn't even on google earth. We just entered Congy as our destination and this is as far as Miss GPS could guide us.

There weren't any cars nor souls nor dogs that we could ask for direction. Finally we saw a couple of winegrowers were chitchatting by the vineyards and our hearts brighten up.
*I thought I almost had to start knocking door to door*

so in my super broken slurry *coz I was tipsy* french, we asked for directions. Instead of replying, these really sweet and helpful locals actually got us to follow his truck and he will bring us there. The men whistled to their dog, that on cue it jumped to the back of the truck obediently and the diesel engine started roaring.

in 30 seconds *seriously 30 seconds or less* we were stationery in front of Mr. Collin's home.
with no signage to shout about his champagne business, don't think anyone can find him.
I didn't even get a chance to say thank you to those locals!!!! 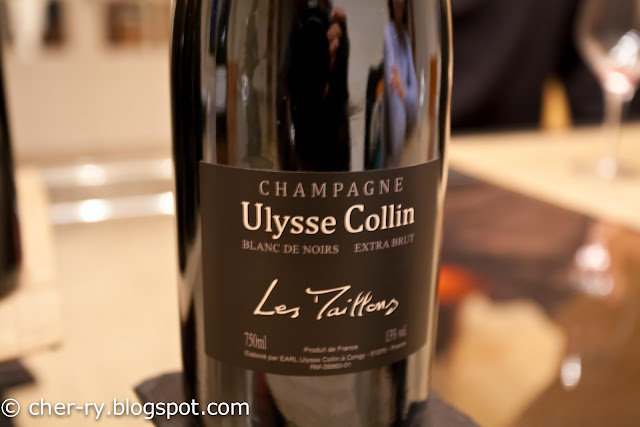 We arrived and we were 15 minutes late. I tell u French are really punctual OK!!!

again I apologised and my french must be so slurry and horrible Mr. Collin asked me in his good english: "Do you speak English?"
Monkey: "Voila, nous parlons anglais!!!!"
Olivier Collin is the current generation who took over the artisanl wine making from his father, his grandfather. Frankly they've been making wines and champagnes since 1812
woooooooaaaahhhhhh 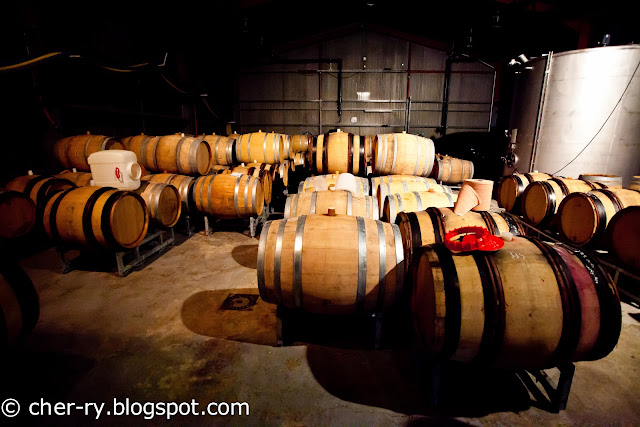 We were standing in the cold and Olivier quickly invited us into his little factory
looking at all the barrels with wines innit made us warm again....hahahaha

seeing the small numbers of oak barrels, unlike those commercial "publicitaire" brands and production houses, u know his champagnes are really really limited 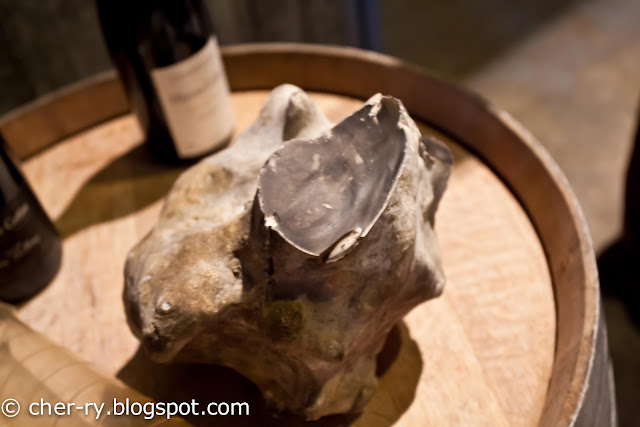 Olivier Collin the owner, the winemaker, the trader, the merchant began his story
a wonderful and beautiful story that moved us so much, we stayed there for 3 hours!!!!!

above was a type of mineral - Flint
when he took over the business, the first work that he done was to re-plow his land *but before this part began, there was another more difficult process which I'll describe in my next paragraph*. When he re-plow, he re-discovered the essence and characteristic of his soil. Thus finding it rich in minerals such as onyx that give his grapes a character.

so Olivier did not start his career by immediately taking over the business. u know in Europe it's not that easy where family business can be easily spoon-fed and handed down to you like here in Asia? There's a lot of challenges whether from authorities or not.

Olivier studied Law with a single mindset, to reclaim the lands his ancestors own, which were leased out to big houses --> Pommery champagne 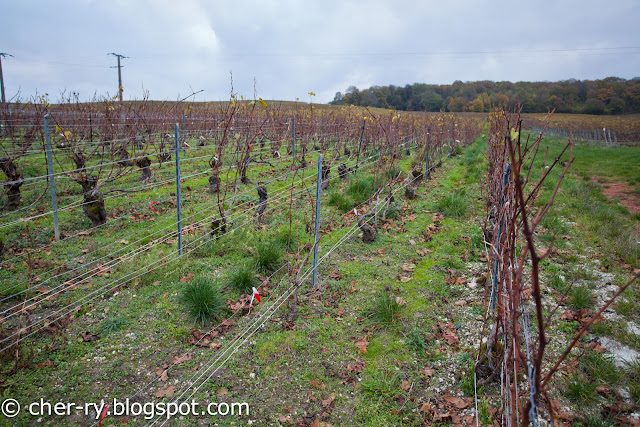 The Collin estate :))))
it ain't a walk in the park to legally re-obtained back these lands
we totally can see those challenges in his eyes 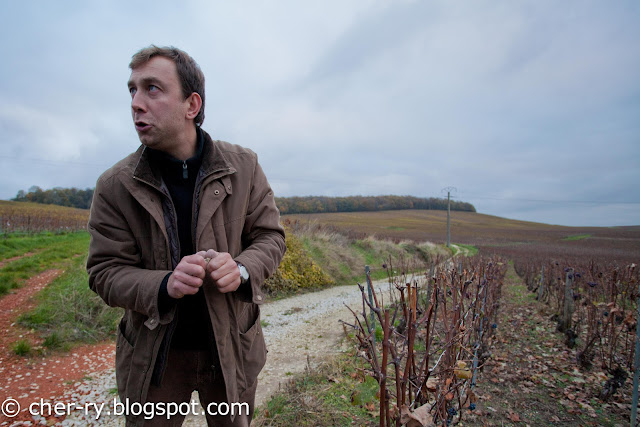 we were led out to his vineyard to study the soil
yes class, geology lesson now in the cold
he began picking up pieces to show us the difference of soil and chalk 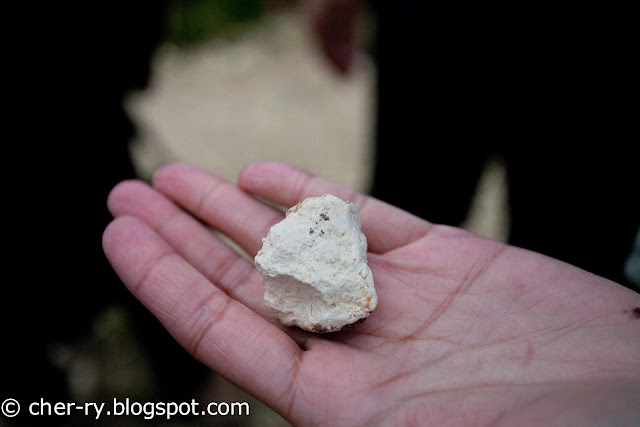 he went on to describe the different layers of chalk on his land, how deep they go, how thick they are bcoz then he can work his vine better with such information.
so u see, u really need to understand your land aka your soil.....and work with Nature 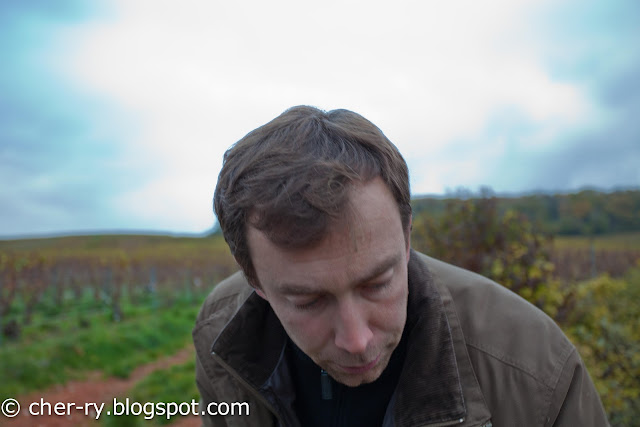 example, during a new moon and a full moon, the gravity pull is greater that draws the water up on higher ground. There's an almanac on which day to plant, which day to plow, to fertilize, to harvest, to vinify your wines yada yada yada.

I did some research on bio-dynamique which some of u may find ridiculous esp on the part where u get cow manure = dung, buried them into the cow horns in soil during the winter months, which u'll dug up later, mix with water and fertilize your soil.

I believe if it works, it means something. Probably it's the property of the horns that kept or stabilize the cow dung *which is a form of fertilizer* in the ground. After stabilizing them prollie it makes a really really good fertilizer for your plants 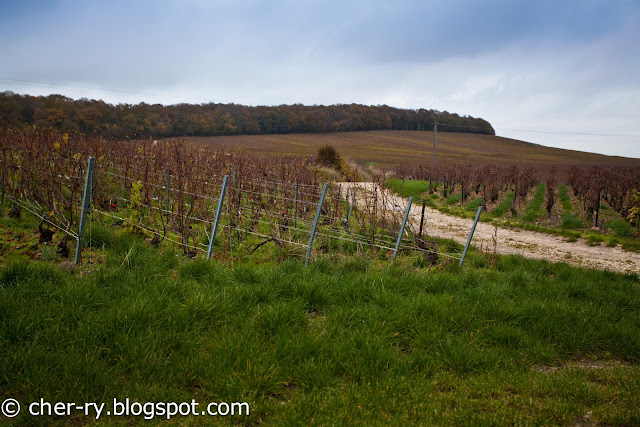 Biodynamic or bio-dynamique wines...champagnes are always proven more superior because of its terroir. However if that year is a horrible year in terms of weather....it also shows badly when this method is practiced.

Hence most biodynamic growers usually sell their grapes off in bad years, afterall big champagne houses buy grapes from everywhere and mix, blend, vinified them according to the market's palate. 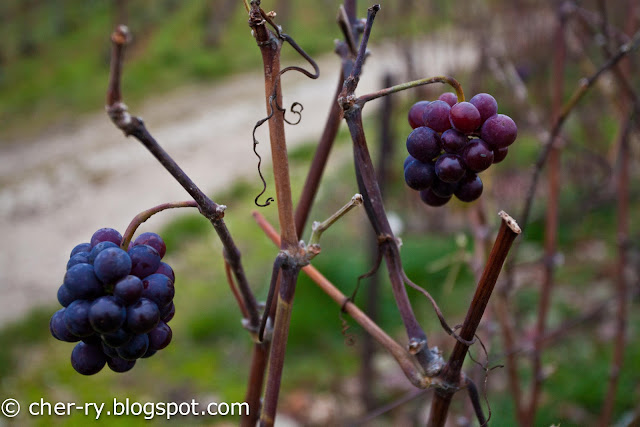 There were some bunches of grapes left on the vine, I reckon they were not good enough for winemaking. 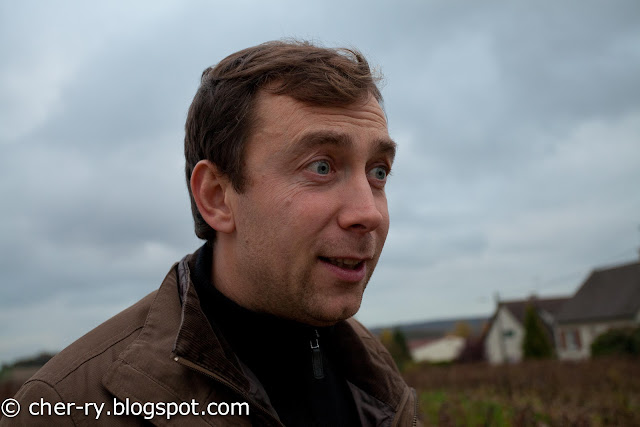 Olivier Collin is so passionate about this business
he doesn't see it as a means of living but a way of live. 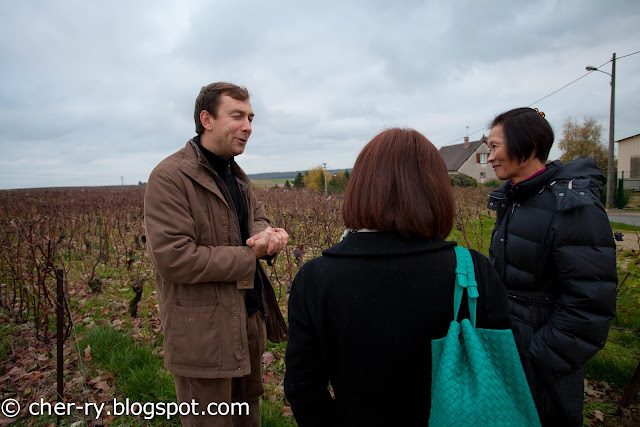 I guess we've been drinking in a really wide spectrum to discover all these alternative winemakers. When you have reached this stage, I guess no brands could impress u further. Hence it forces u to seek even more special, meaningful and limited wines. 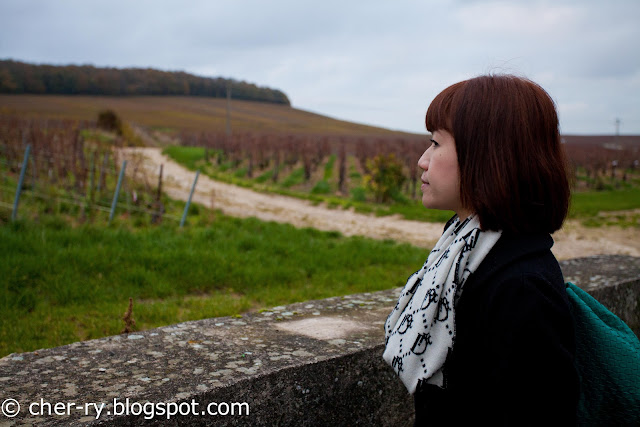 before we left back to the comfort and warmth of Collin's home, Monkey paused for a quick reflection as the rest hurried away fr the autumn chill.

There are 2 school of taught in champagne making.
Terroir and blending. Both have got their strength and characters. It's a matter of preference but the hardwork of studying about what you have - the soil, the type of plants, the celestial influence, ways to improve grapes that in return gives you the desired character made me appreciate every drop of champagne that I owned now. 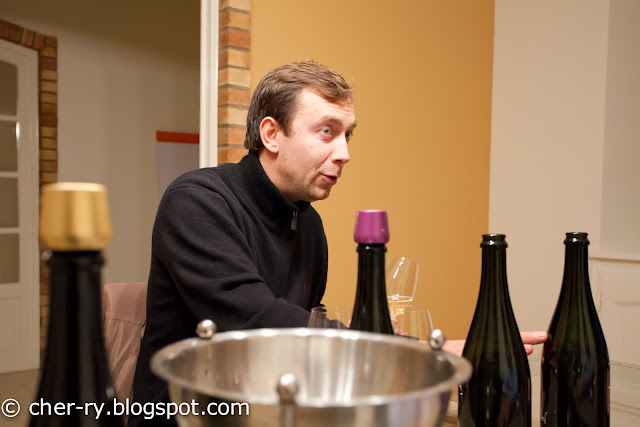 Soon we were back to his comfortable home to do some tasting
I knew that I fell in love with his champagnes the 1st time we tried it in Singapore. Made us coming back for more but production is so limited, quantities are allocated....and our dearie Henry H only has got so much to sell to us.

Collin's champagne is so beautiful, u cannot not like it
his tasting notes....oh my u got to taste it because I can't even describe it. Beautiful bouquet on the nose and rich aromas that coats your palate

He worked so hard to reveal the true personalities and characters of each parcel
with his deep respect and affection for the nature, he said he made Wines of Terroir

This is what we have been looking for.
Wines of Terroir 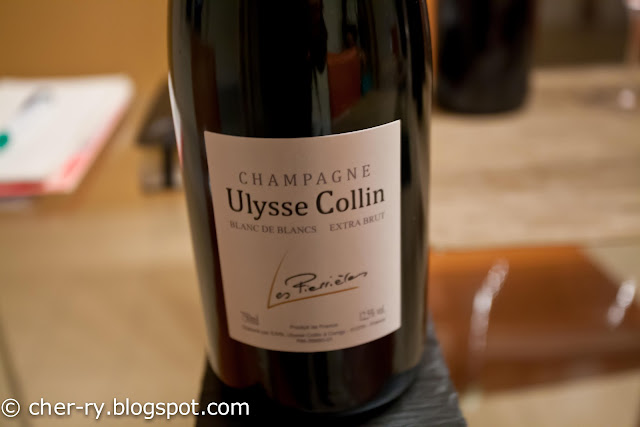 I am sorry, his quantity is so limited, everything has been pre-sold
Now we just need to go down on our knees and beg from our dearie Henry H to buy a few bottles.
>.<

Ulysse Collin has been highly sought after
and the more ppl know about him, the higher the demand
Guess I better just shut up and not even post about this huh?
NO, I can't be so selfih....good things must be shared.
:)))))))))) 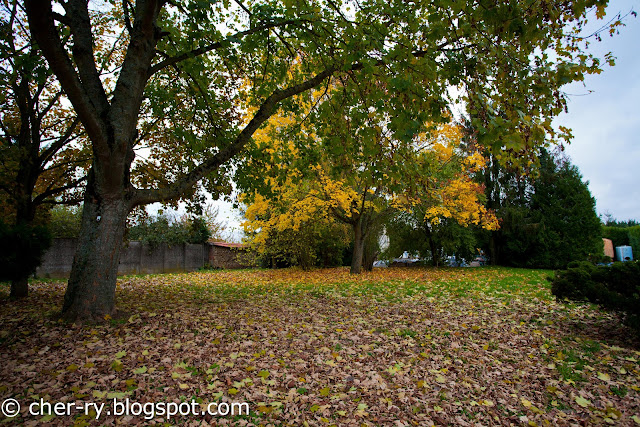 Olivier has got a huge garden for his kids and dogs to roam
I felt like a lil gal here running around, ruffing up the autumn leaves. :P chasing his dogs :P
*hehehehe that's me*

My great respect for this amazing vigneron for his deep passion and quality that are indisputable. You cannot never go wrong with Ulysse Collin
Thank you to Henry H for arranging this wonderful appointment with Olivier Collin. Now once u are back from France, I'll be begging at your doorstep. :))))

Passion shows...in whatever one do with passion!

Gorgeous.. and those grapes are just so round and juicy fat...