My First attempt at Rock Climbing 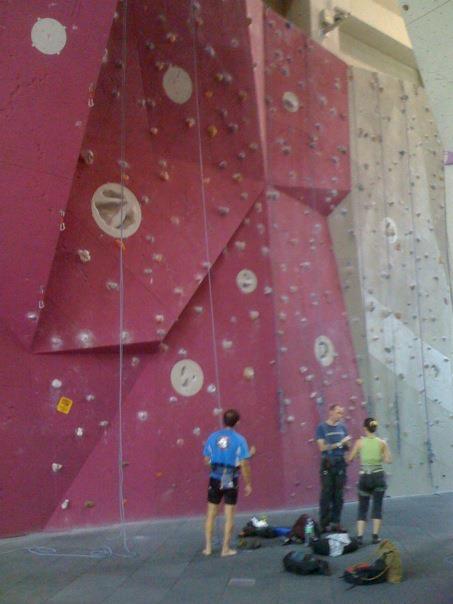 Acrophobia
that's wat I am since I was a lil gal
I can't lean on the balcony even though it's only a floor's height
can never climb up a ladder till the top
will never ever look down fr a high building
almost fainted when we took the express lifts up to Eiffel Tower Level 2
had a difficult time working when my table was next to the glass window in Petronas Twin Tower
nightmare while riding all the cable cars in Langkawi and Hong Kong
legs turned jelly while climbing Kelly Castle's roof top *I know it's not high at all*
wanted to die on all the roller coasters rides
and THIS
I still wanna do this!!!!!
why do I succumb to such pain and fear???
I guess I had so much confidence in my friends
that I left my life in their hands~~~~~ 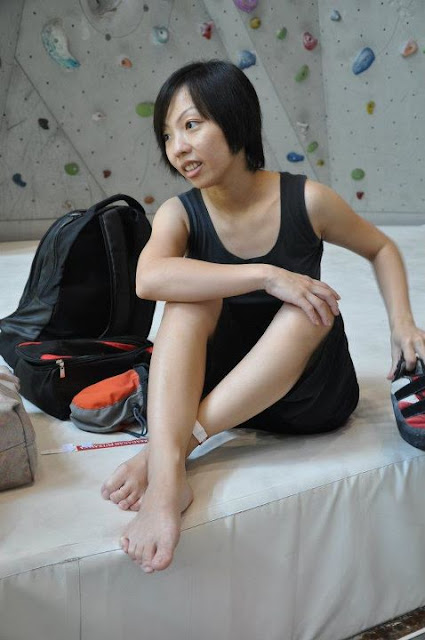 introducing a seasoned climber, Nee Lee
she still called herself an amateur *I don't believe u!!!*
if u climb 3x a week that's not a beginner OK
>.< 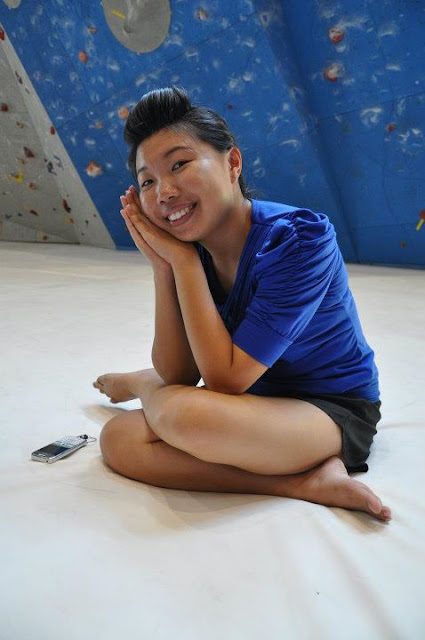 Next our loveliest photographer for the morning - Shell Shell
she did climbed once a few months ago and decided it was not her thing *she's scared of heights too*
so she rather had fun sitting down there.....giving moral supports which I needed badly.... 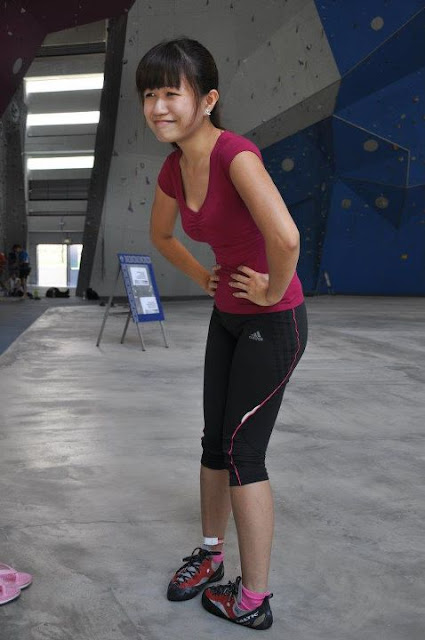 I was so in PAIN
not bcoz of the anxiety
nor that I forced meself to climb
but the damn climbing shoes!!!!!
GAWD is this how it feels like in "foot binding" during the Tang Kingdom in China?????
cringed in pain
can't even stand up
I couldn't walk
and I was told this is how it's supposed to be 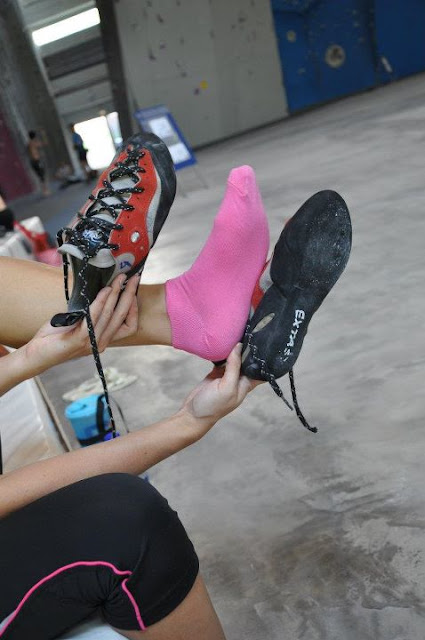 look!!! my feet is at least 1.5 inches longer than the climbing shoe ok!!!!
I thought how absurd....it wouldn't fit in
it took the longest time of my "shoe" life to cram meself into this pair
while seated the feeling wasn't so bad as compared to standing up
the moment I stood up
standing and weighing my own body weight ALL of it unto those delicate tiny toes
I think no cases of dancing whole nite in my 5.5 inches heels
or running events for 8 hours on those can be compared to this
this was Chamber of Torture!!!!!
GAH~~~~~ 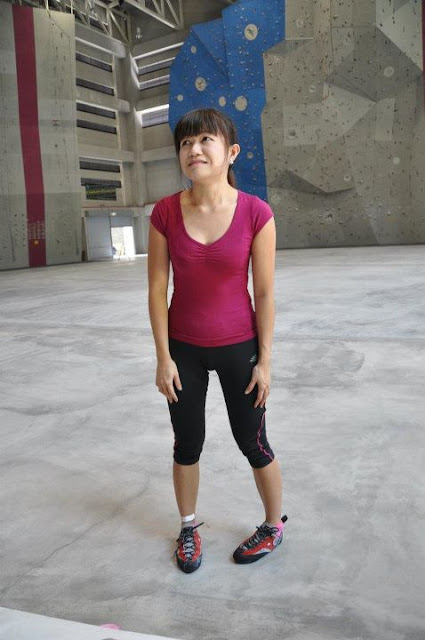 next, when face to faced with the intended wall I wanted to chicken out
I actually asked Shell Shell.....can I not do this? :P
what have I gotten myself into?
but JS alwiz told me to conquer my fears 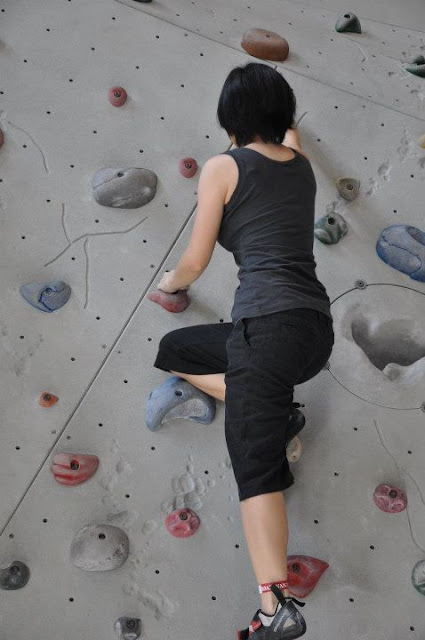 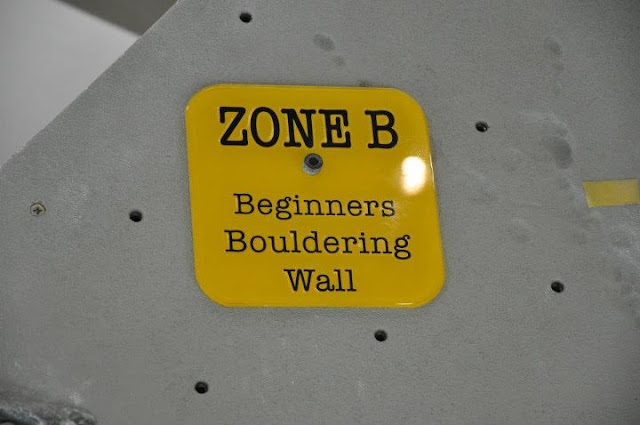 this was where we were....
the place won't allow unsupervised climb
it's a rather dangerous sports anyway 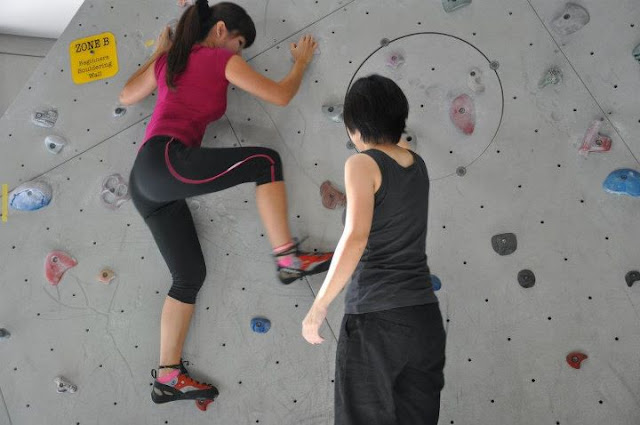 now.....get some basics right...
those pebbles/stones are rather small and it won't accommodate ur gigantic feet...
so the key is climb sideways with one side sticking to the wall
it looks easy but isn't at all!!!!
lots of strength is needed for this sport
if it can tone up my ass/butt I'll start to do this every weekend...
can it Nee Lee????? 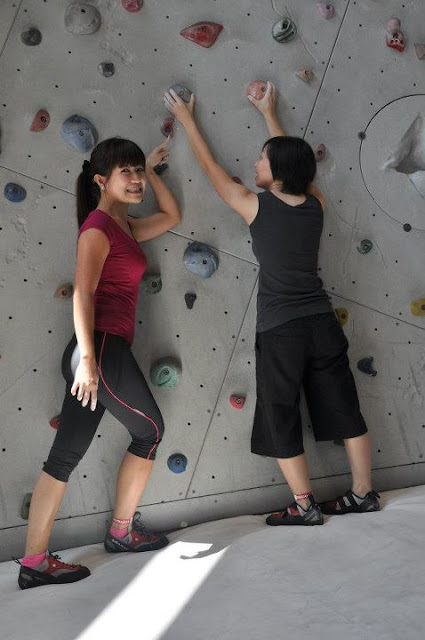 after some "safety" briefing and basics by my Si Fu....it's about time...
I was still monkey-ing around la la la la la~~~
but when the Real Thing hits my face...I really really wanna throw away the shoes, run back to my car and leave :P 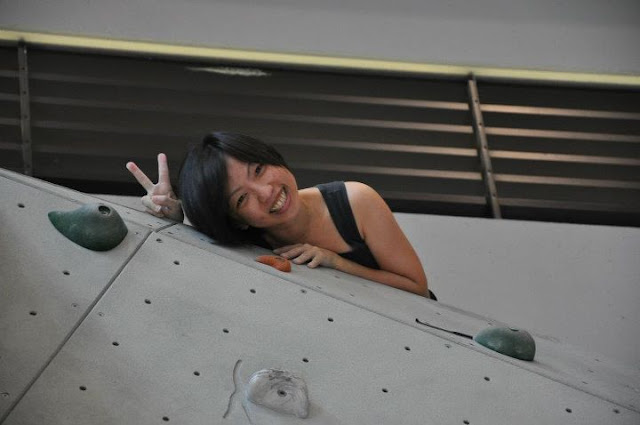 Si Fu Nee Lee got up first
in a few nano-seconds
so she can guide me up from above..... 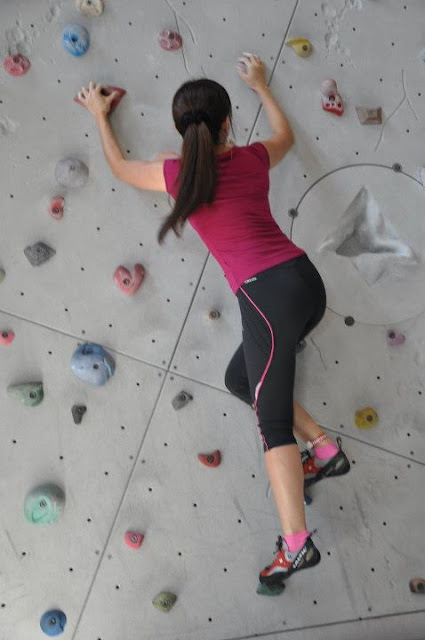 OK...hmph...I CAN DO THIS!!!!!
feet secured....grab the right pebbles/stones
lift urself up with ur calves and feet and not with ur arms
all the safety reminders kept playing in my head
strategize ur moves!!!!! and coordinate ur limbs!!!! 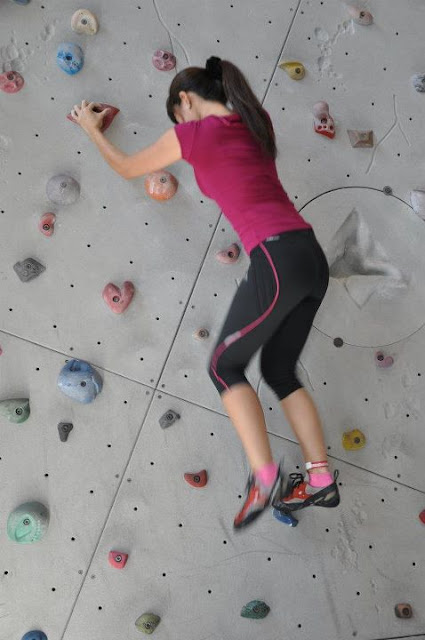 if u can't do it....just let go and fall backwards
there's a soft mattress at the bottom that catches u
I didn't wanna be tat......I'm a proud person and hard headed too...
this Monkey continued on....... 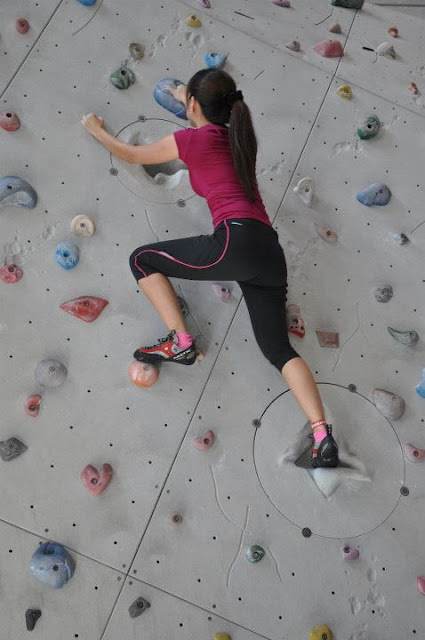 I was like Gah-Gah-ing my way up
like a Drama Queen
more like a Diva
to the contentment of other climbers around
wat a joy to watch right??? Shell Shell was giving me full blast moral support at the bottom
"Don't look down....don't look!!!!"
WTF!!!! this is the thing about human...the more u ask them not to...
like a forbidden garden...the more they wanted to...
and I did look down.....GAH!!!! GAWD!!!
let out such a diva-ish scream
WAT THE HELL AM I DOIN HERE????
it was already halfway...
too high for me to fall backwards
my muscles stiffened...
it was like the most important decision ever....
almost like do I get the Chanel or the YSL?
both is so tempting and dangerously expensive...
I can't have both...
well in this case, it's my LIFE 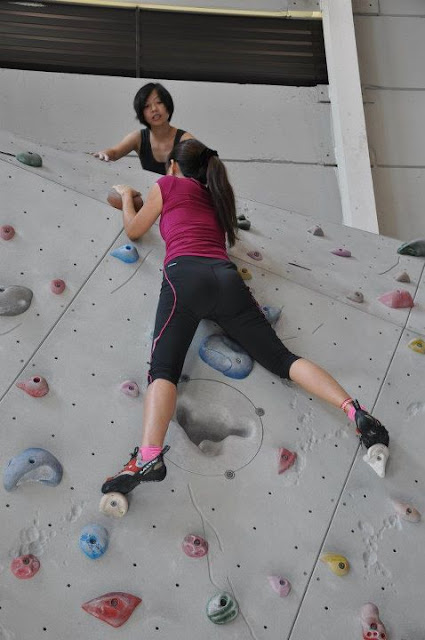 the worse came....*well at least not the worst yet*
I was stucked...with no more strategic pebbles/stones to hold on to...
i took the wrong route...
can't strategise....it's like a game of chess
and started to panic even more 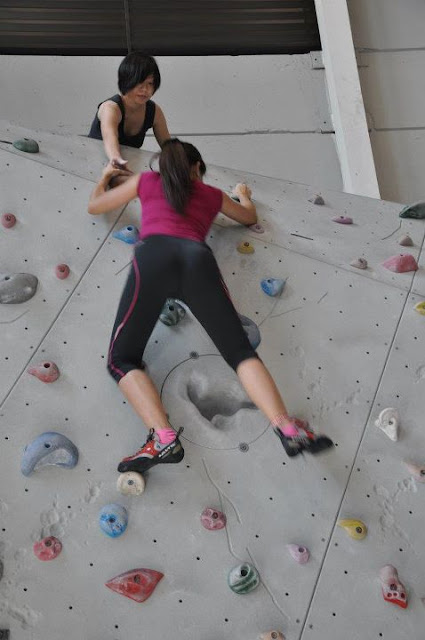 Nee Lee was guiding me step by step
"now hold onto the pockets and u step onto that bla bla bla yada yada"
all those climbing jargons...@.@
Monkey: "Fark!!! dun tell me pockets or watever shit was tat...tell me which color!!!!"
muffled under my heavy breathe...I was getting tired already
all the energy were spent panicking :P 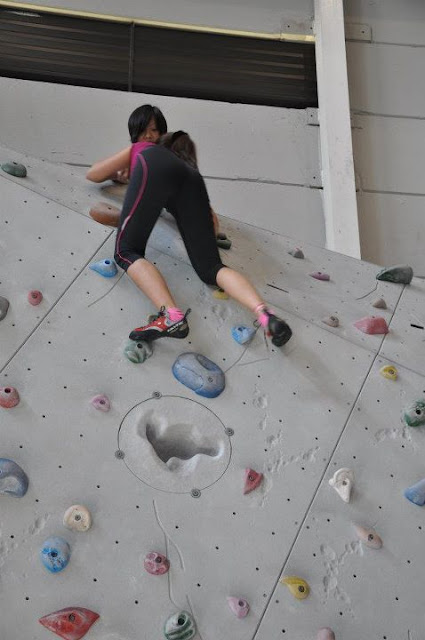 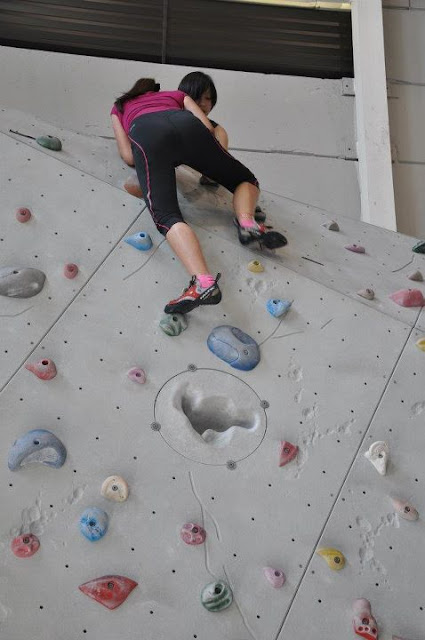 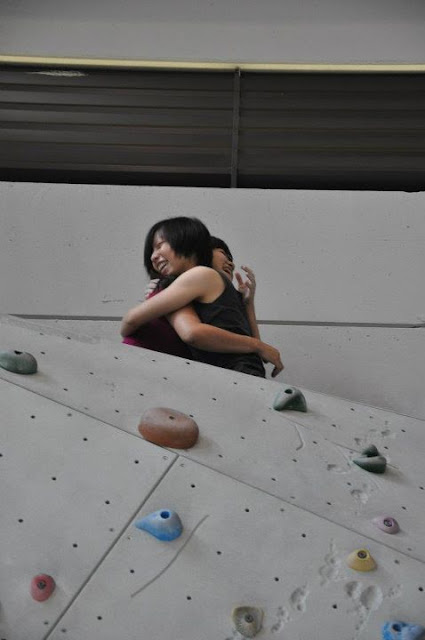 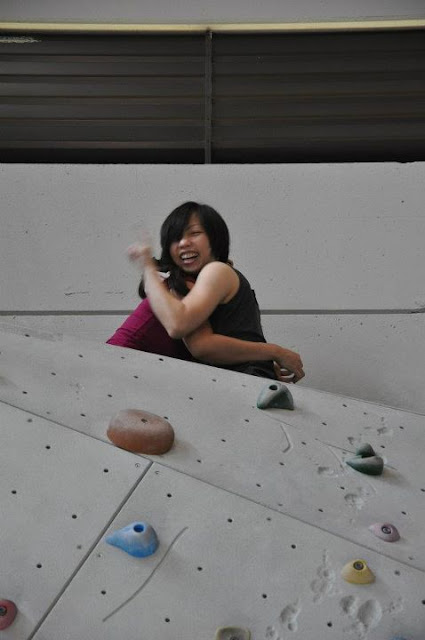 Nee Lee was luffing so hard
coz we were being drama
I wanted to cry coz it was so scary!!!!
I dun care wat other climbers say
I dun even care if they were luffing at me
or scowling at my language "fark here n there and the occasional bitch"
and all the noise pollution I've created for such a peaceful activity in this indoor climbing house of sports
then there were applause
I felt GREAT
:P
esp with Shell Shell and Nee Lee
I've needed every single ounce of support they've provided me 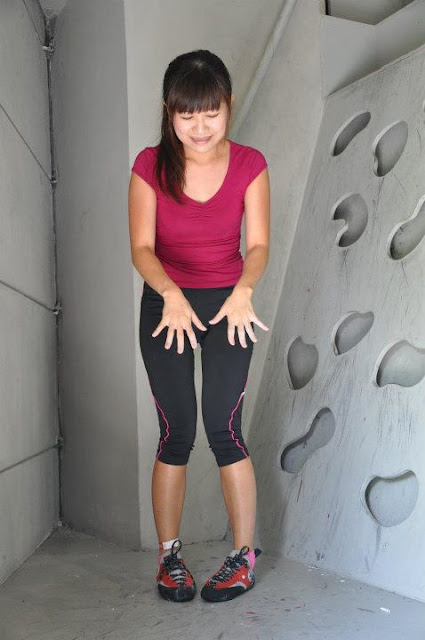 I was still shaking after I've got down.....
yes I was that scared
other thing that made me cursed like I was giving birth
was the goin down part...
totally unaware of this!!!!!
hmph!!! 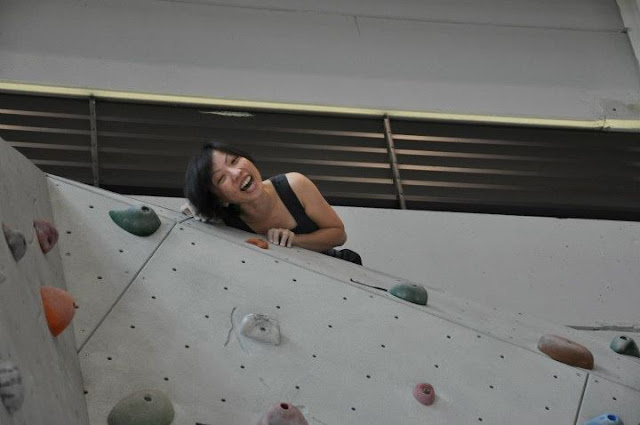 before I could compose myself
before I could rest my painful feet
Nee Lee was up there again....for the 2nd time
in such speed lightning moves
such agility and grace can only be attained with numerous hours of practice 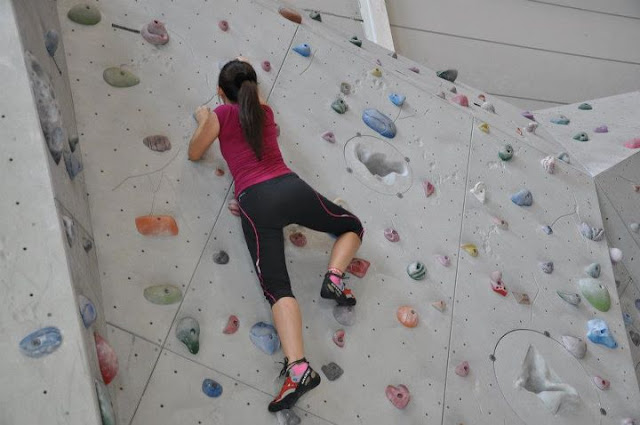 okie.....I'm coming up again said this proud Monkey
this round taking a different route


I thought the 2nd time would be easier
the fear would be lesser
hell no....it was the same


just like wat JS told me when he did Bungee Jump
and clever him went for the Buy 2 Free 1 Package
every jump was as scary as the first
so after the 2nd jump he decided he had enuff....so long for the buy 2 free 1 package
hellooooo nobody goes for this sort of thing u know??? it wasn't a good bargain afterall 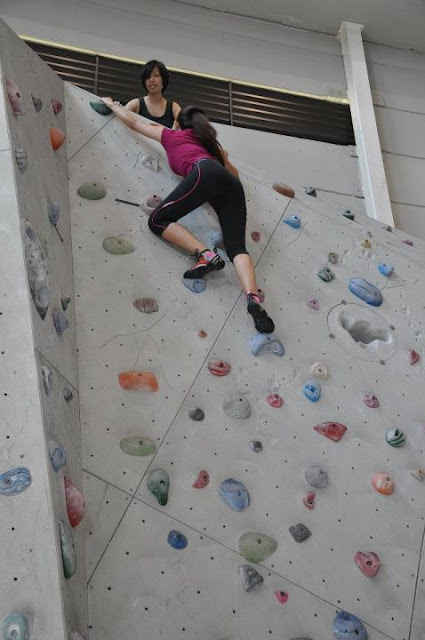 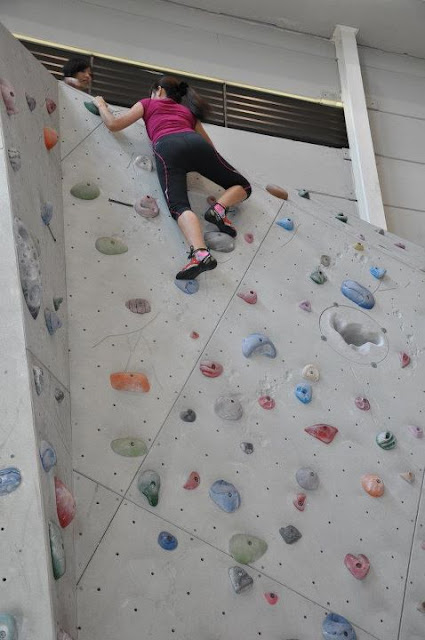 again I needed help at the end....
didn't know the last bit could be so difficult
like which leg to land up there first...
whichever it is...my legs aint' long enuff.... 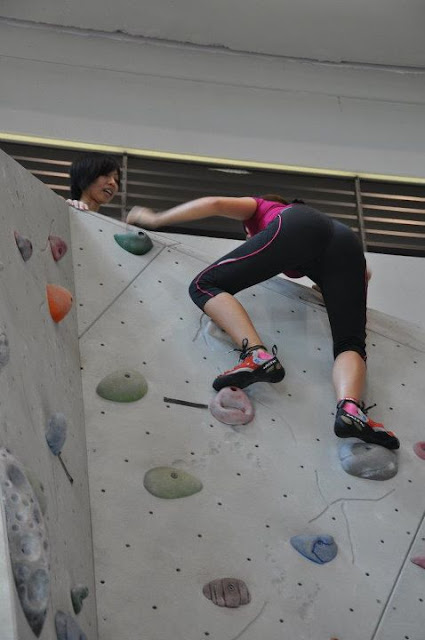 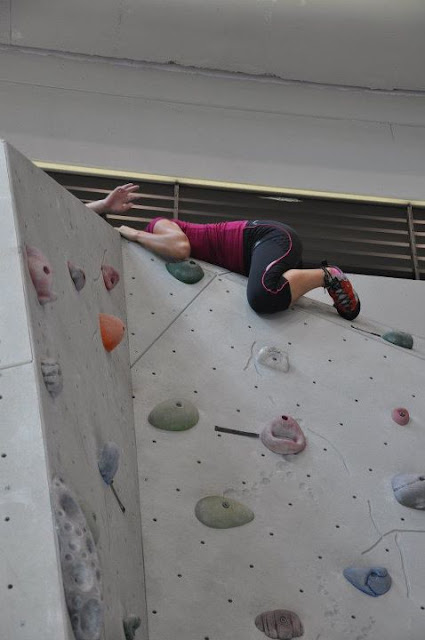 not a very proud moment
I was stucked there.....at the top
coz my feet can't touch the platform on the otherside
basically I'm not "landing" well
the only thing I could do was clutching to this artificial wall for life
it's either I fall to my right or left
if I do fall on the later....I might land on Shell Shell and injure everyone 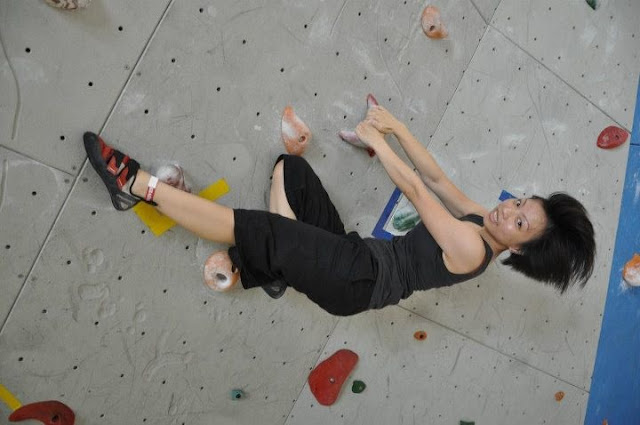 after that all I could do is watch Nee Lee scale the wall
gracefully
while me and Shell Shell were just clapping at every moves
:P
hehehehehehehehehe
I'm really glad that I did it
at least once in my life
as another friend told me, it's pretty addictive
I wanna do it again :))))))))
Roomies.....Thank You for taking me there!!!!
it was an awesome morning!!!!!
Muaakkksssss
Putrajaya Challenge Park,
Jalan P5, Precint 5,
Putrajaya.
Glossed by CHER-RY at 9:51 AM