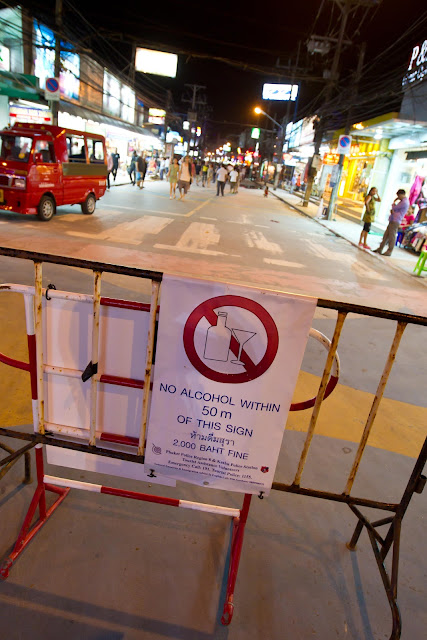 why no alcos???
when everywhere within arm's reach of this signage we can get alcos???
there's more street vendors/peddlers selling alcos than ice-creams or waffles or the farking tuk-tuks
it's like they were just selling fruit juice hahahahhahaha 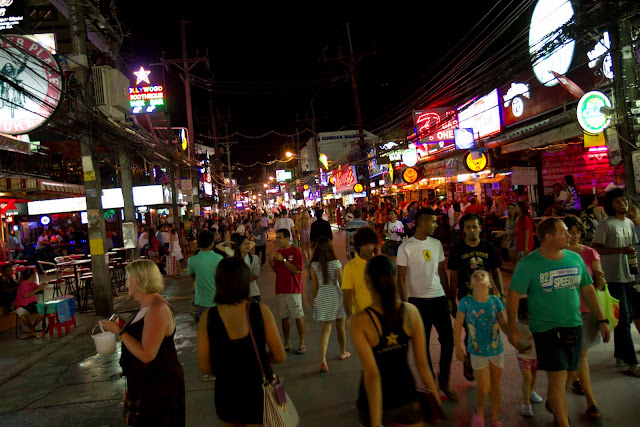 Welcome to Soi Bangla
the famous street in Phuket
this was where we hang out after our midnite snacks and massage :P
and about 500m fr our dearie hotel 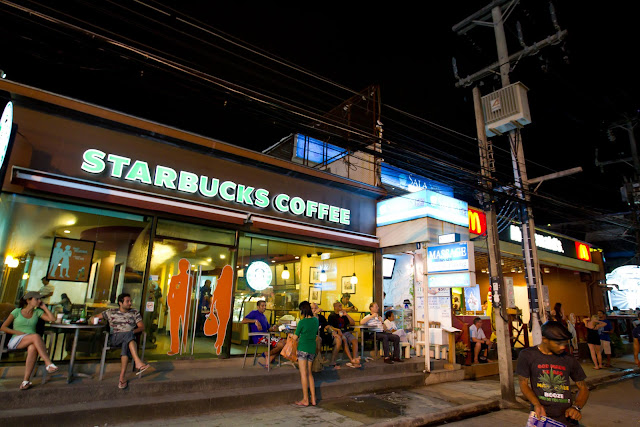 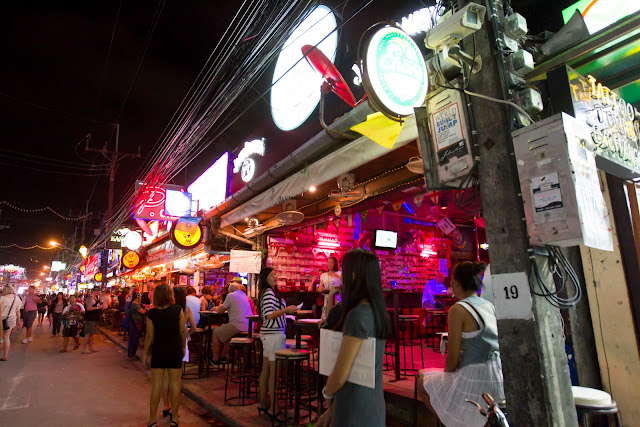 rows of BARS and pickup joints along this street
it's not a very long street....end to end without being interrupted by the patrons & peddlers here will be about 3 mins?
trust me they will sell all sorts of stuffs to u and the famous one is...Ping Pong show
y ping pong??
coz they can pop and shoot ping pong ball outta their-u-know-wat :P
and open bottle cap with it
and puff a ciggie with it
O_O
Monkey faints~~~~~
wat else u can't do it with it???
perhaps the saying goes...it can do everything cept makes coffee
I was kinda amazed and disgusted by this show but ppl alwiz wanna see wat u can do with ur Vagina 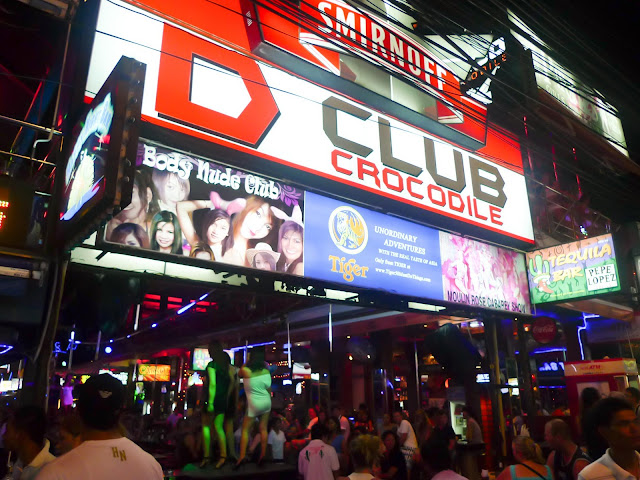 so many sub-streets to hang out
some were run by foreigners, white men....
so many clubs to go to...
so many bars to hop
patrons are just spoilt for choice 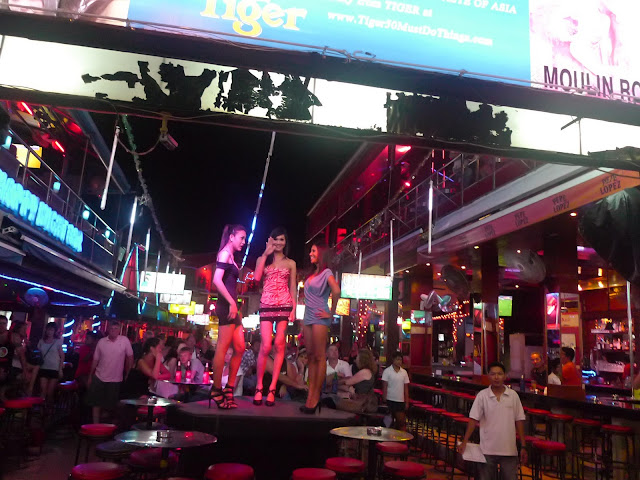 and the Ladyboys~~~~~ aka KaToehs in Thai
guess the white men can't really tell if they are men or women by birth
kekekkekekeke
tip: check out their shoe size 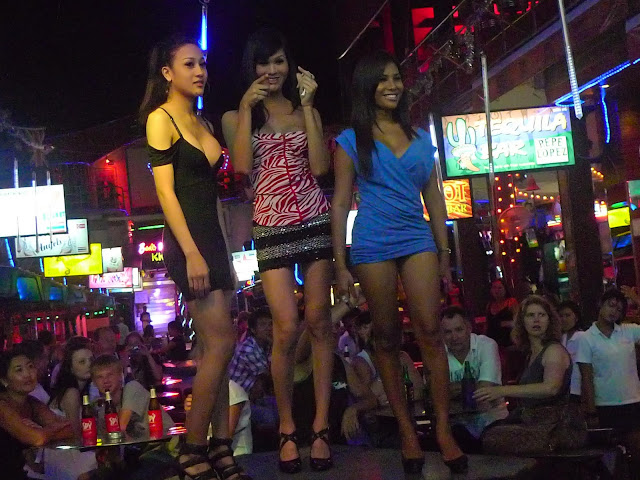 
my advise is to sit further to enjoy the show but now too near
I dun fancy seeing wat's underneath their skirts hahahahaha
well if u gonna sit on the table right underneath them...u'll get a wholesome view
will go more into that later. 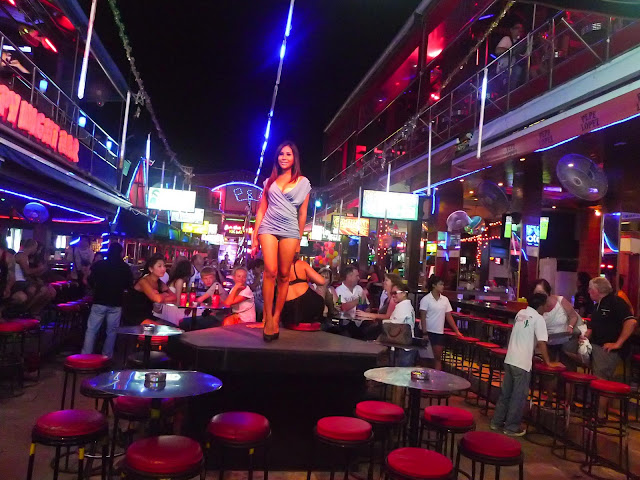 noticed those few tables were empty???
hahahah coz u won't wanna be drag up midway thru their shows to be one of their props...
I've got a pics which I'll show u later....
consequences of sitting on those tables
anyway this place was soon filled up with patrons 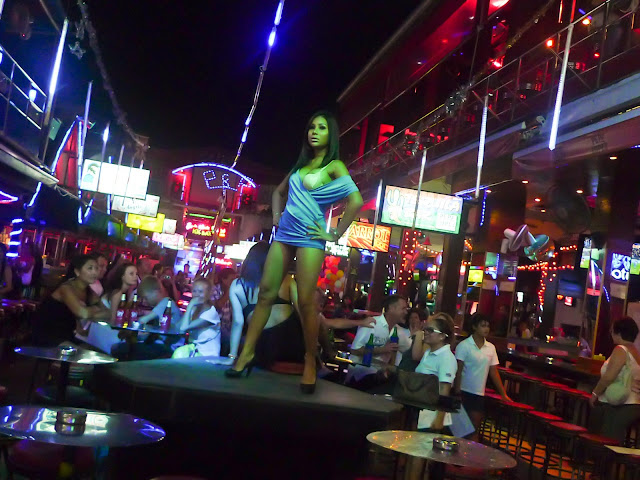 check me out!!!!
she errr I mean SHIM look typically Southern Thai


later she lifted her dress and spread her legs
I fainted again
euuuuwwwww
big package there :P 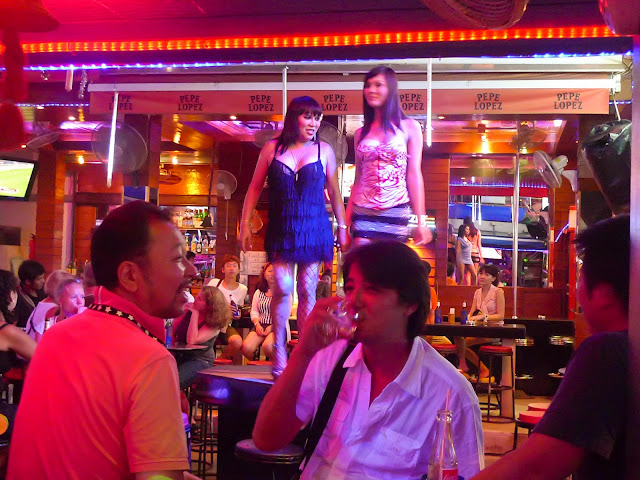 a group of Japanese men were having a jolly great time
bahahahaha
coz in the end all the gals sat with them :P
let's not dig into tat...hehehhehee 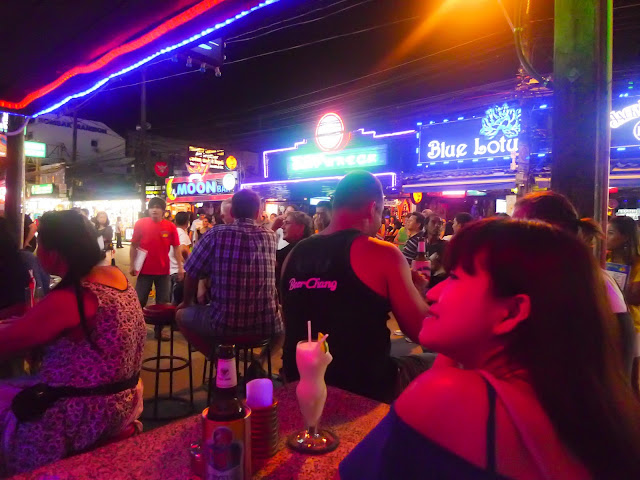 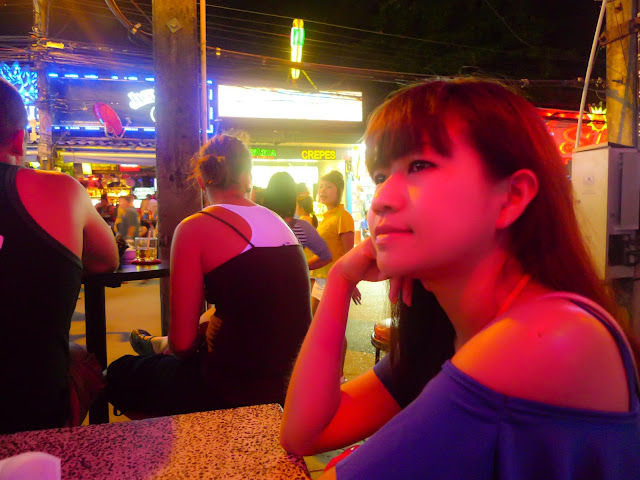 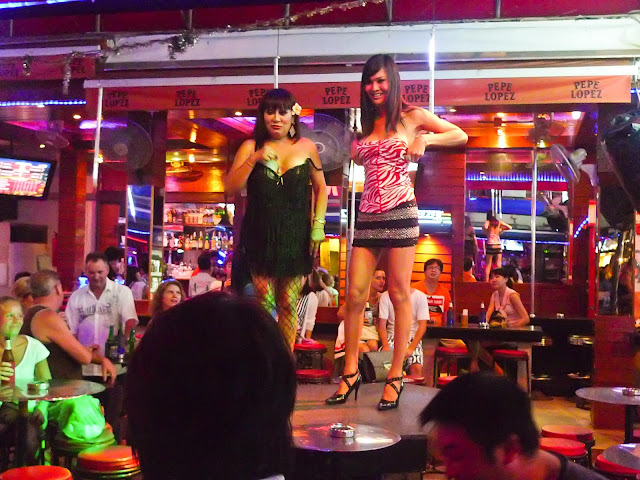 and it's SHOW TIME!!!!
again pls be reminded these are Ladyboys
if u wanna get hookers it's on the other side of the street
there's also plenty of streetwalkers...meaning hookers walking around lookin for clients with no attachment to any bars or owners 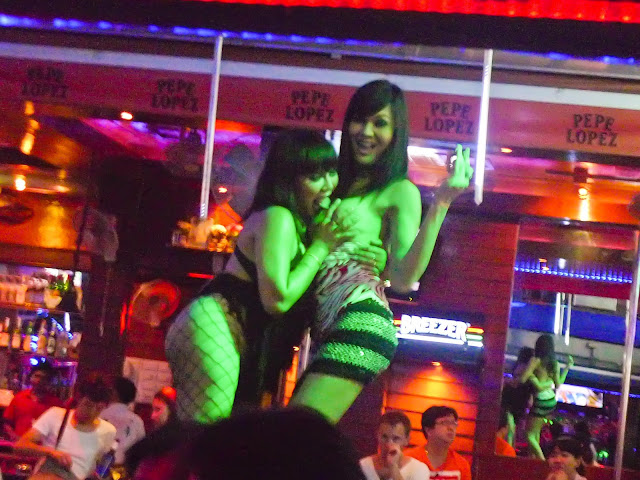 
bar fine is something u pay the mamasan or papasan
for taking their gals out...it's about RM 30 to RM 50 depending on bars 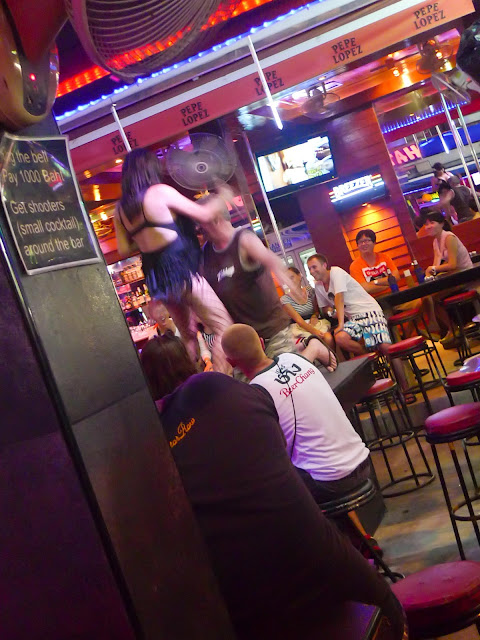 see told ya not to sit right under them
u think u wanna get some upskirt views huh?
till they drag u up for some tiger show
Aussie men never listen anyway 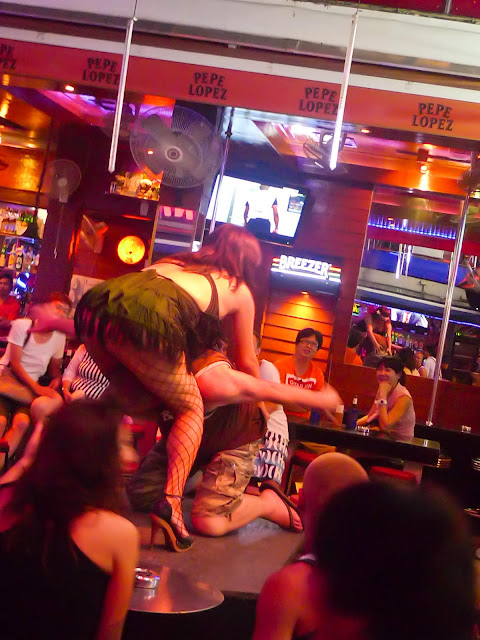 so wat fun is it to go underneath her?
esp when she's only half-baked with boobs and penis still attached to her body?


and all of us jolly had a view of her scrotum and the whole package
hmmm so do u call them him or her now?
thank gawd I dun buy lottery....else suay 4 years 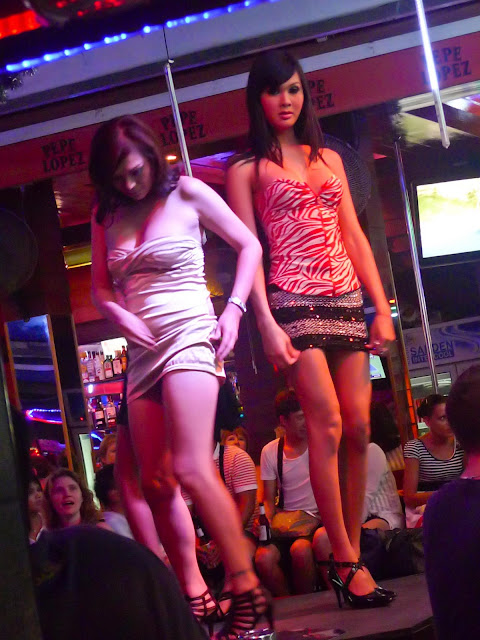 ok the rest of the show is too SX
kenot post on the blog :P


They are really performers and do know how to entertain!!!!
hahahahahah
they can even tell whether u r Korean, English, Japanese or OZ


ARIGATOOO!!!!!
then more papernote being slipped into her bra....
and the ARIGATOO grew louder!!
basically for $$$$$ u can get them to do watever u want
to them this is part of their JOB and LIFE
to be born a She-Man isn't a choice
afterall it is the 3rd gender in Thailand 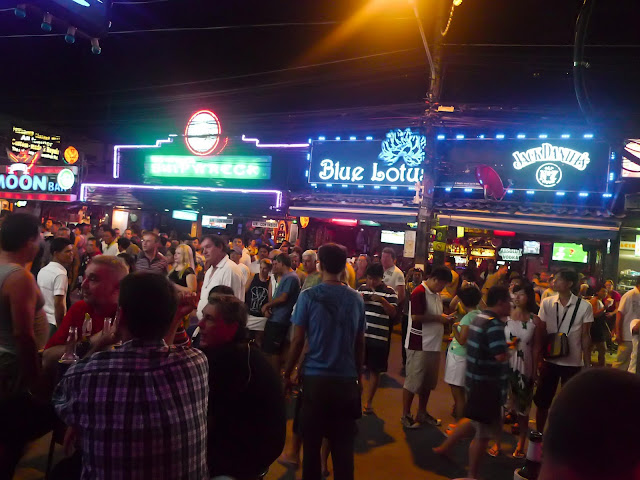 
peddlers offering u all sorts of service their gals do
Tiger Show, Cabaret Show, and some odd shows I dun even know how to describe
they even have catalogues wif pics.....wow such flexible body huh I said to them
"U want? I give u good price?"


this continues on and on everynite
for this is LIFE in Soi Bangla
Glossed by CHER-RY at 9:49 AM