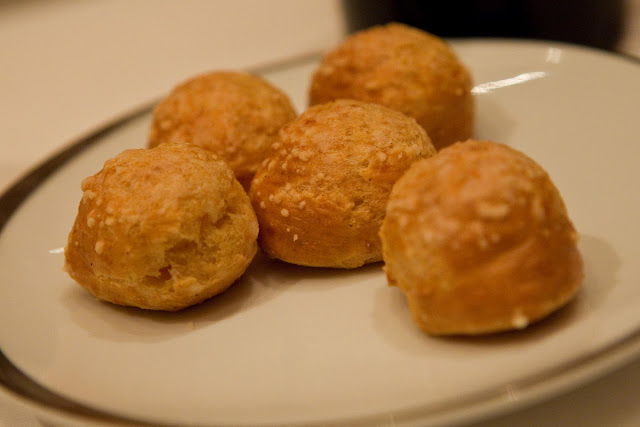 yummy cheese puffs!!!!
it's hollow and airy on the inside
krop krop crunchy bites and I finished everything they served on our table
:D

Taillevent is a very important establishment in Paris
founded in 1946 by Andre Vrinat
its name was inspired by a famous french cook in the 14th century - Guillaume Tirel
who was famous for writing the very FIRST cuisine book.

Taillevent held 3 Michelin stars for 34 years before losing one in 2007
so now they only have 2, but our dining experience speaks for itself
nothing short always more than expected
in terms of food, quality, creation and services. 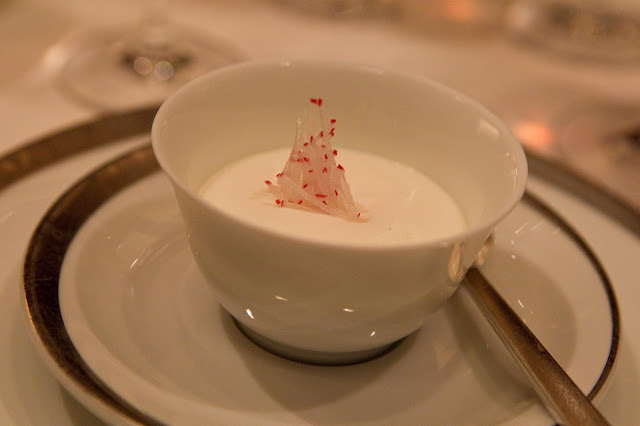 the amuse bouche of Salmon and Horseradish 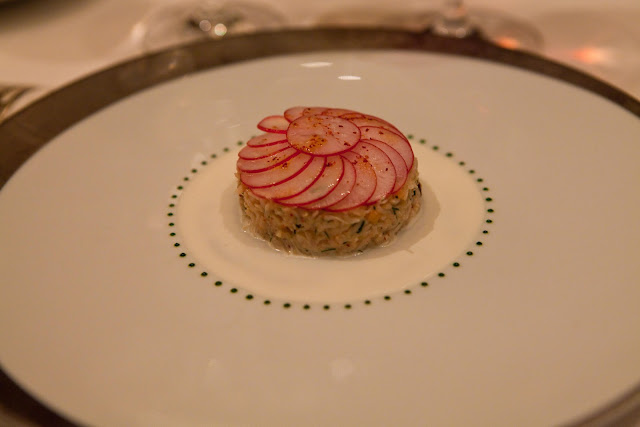 our first course of lobster meat with radish
so beautiful!!!!!
so meticulous
did they actually measure how far apart they need to position the thinly sliced radish? 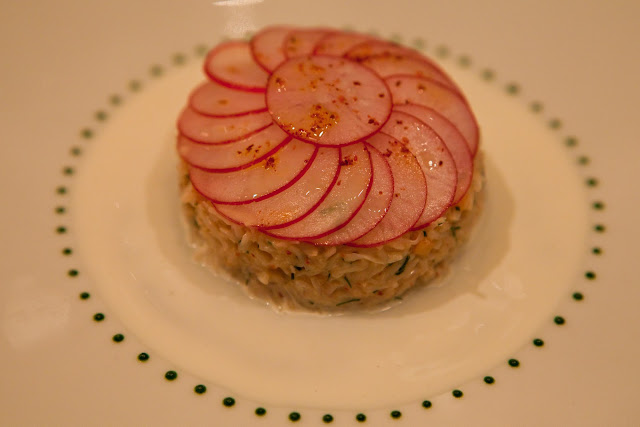 the green reduction fr vegetables were carefully dotted on its side
at 1st I thought it was some design/pattern on the plan...
soon we realised it's edible!!!!!

as radishes has got not much flavour on its own....Chef sprinkled some oil and spices on top to enhance its flavour and crunchiness 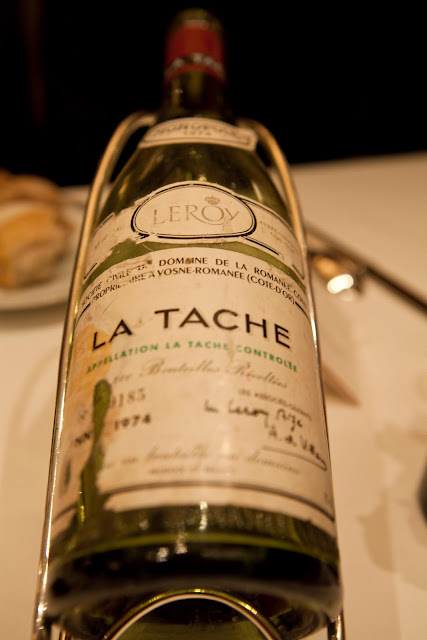 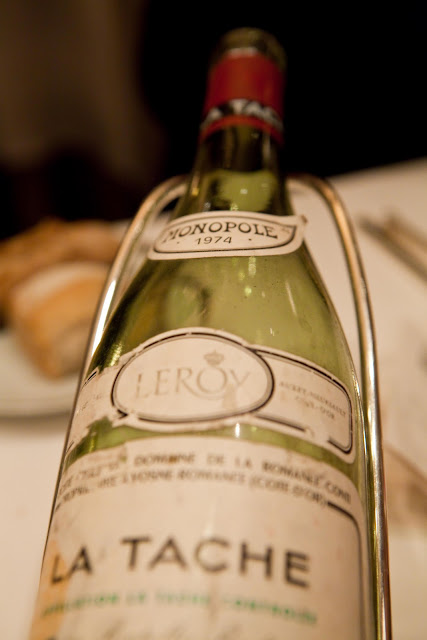 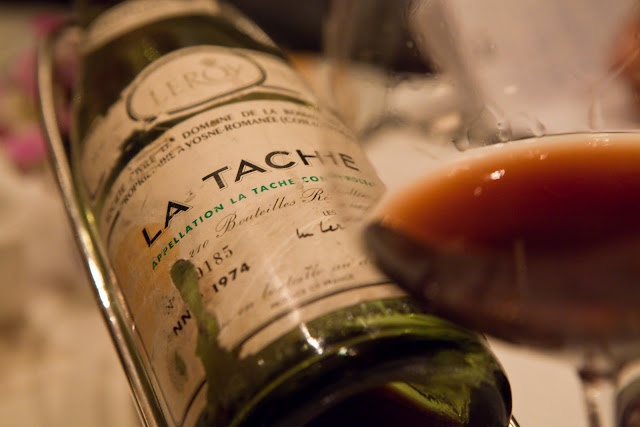 JS ordered a bottle of 1974 La Tache
bottle number 9185
none of us were born on this year...
anyone out there who's reading this????
hehehehehehe
despite being a 37 years old wine, it still shows some tannic innit with a long long long finish 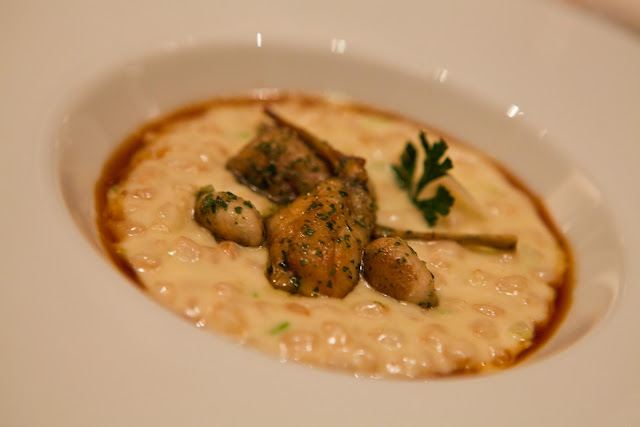 crispy frog legs with wheat risotto
so awesome!!!
both the frog legs and the grains!!!

ahhhh~~~~~ I can just come here for this!!!
look at dainty the frog legs were!!!
risotto was cooked to perfection, so so so creamie with good texture. 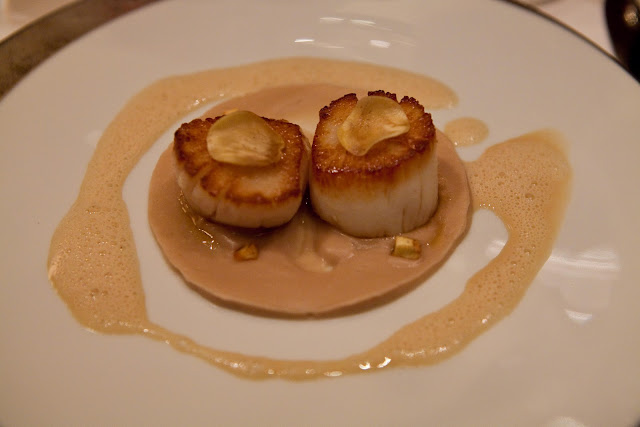 next came the sea scallop served on top of chestnut cream
with chestnut bits and chips!!!!
awesome~~~~~~

at this point, we think they deserved their 3rd Michelin star
really!!!! 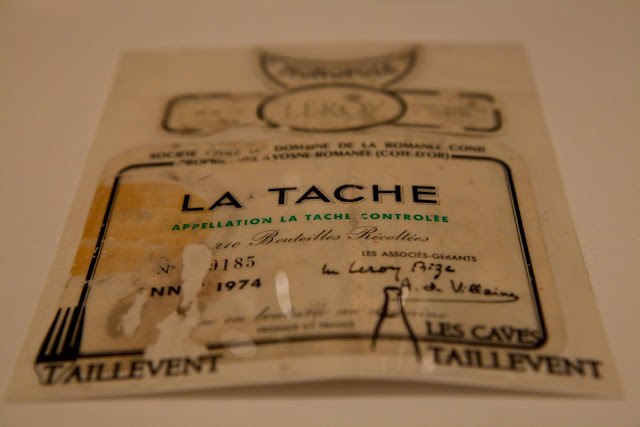 the bottle of wine was so precious we had it removed from the bottle
and laminated
this was one of the extra services offered by restaurants around Paris
now we gonna start our collection of laminated rare wines labels....
hmmm now where do I keep them....hmmmmm...... 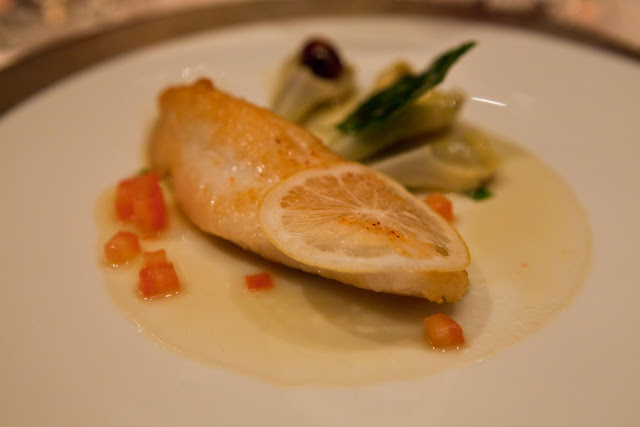 John Dory with artichoke
fish was cooked to medium rare
coz as it sits on the plate, it was still cooking
that's the tricky part about fish, not all chefs can do it well
but if they did, it's one helluva awesome melt in ur mouth fish 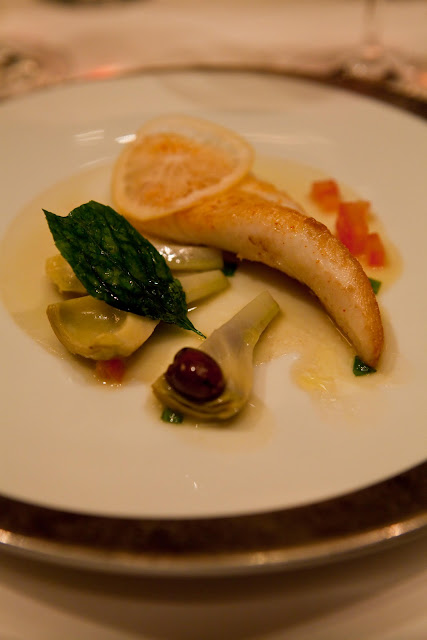 served with baby artichokes and olives
even the plating was so intricate
most of the dishes were too pretty to be consumed
but as for me, the power of my palate is stronger than my eyes
wuaaahahahahaha
afterall there's the camera to capture the beauty and freezes it in time :)))) 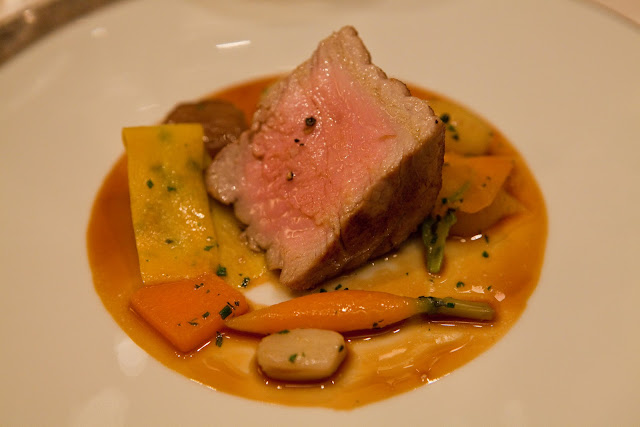 for the main we had Veal with garden vegetables
slight disappointment for me coz I ordered it pink
and it's a bit overcooked for me
nevertheless the taste was yummy with all its baby sweet vegetables on the side
*can u look at the carrots again? how do u even peel something thinner than your pinkie fingers???* 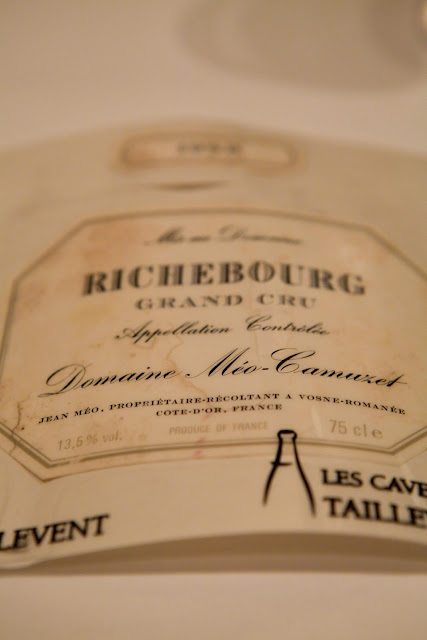 we opened another bottle of Richebourg Meo Camuzet 1989
anyone born on this year??? 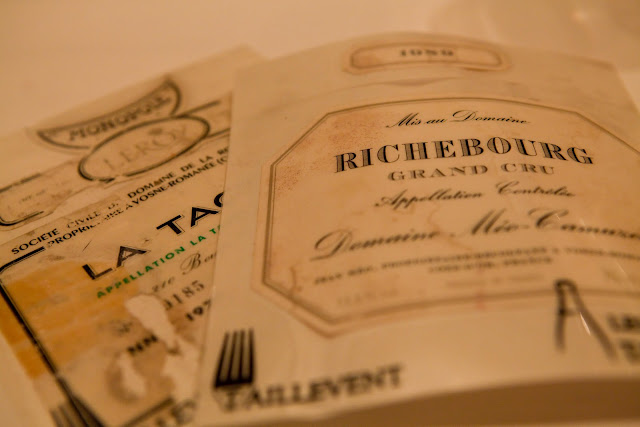 more to add to our collection!!!
I like it that they have the Taillevent branding on these lamination
coz there isn't any from the other restaurants we went to
at least we can remember we opened these babies at which restaurants :))) 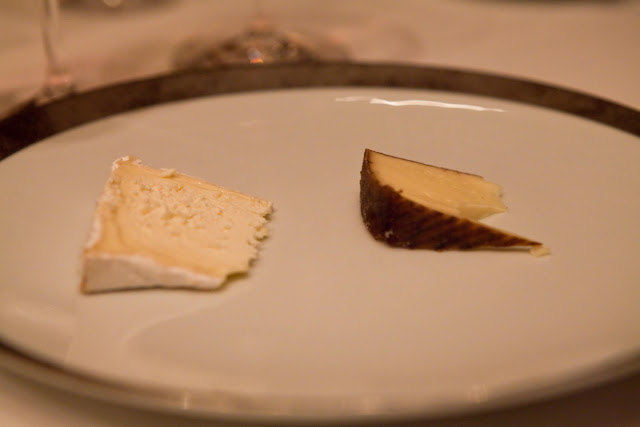 Cheese!!!!
I must must must learn to appreciate cheese more
this need to consult Dinos the Great the cheese master and expert
tee hee hee...... 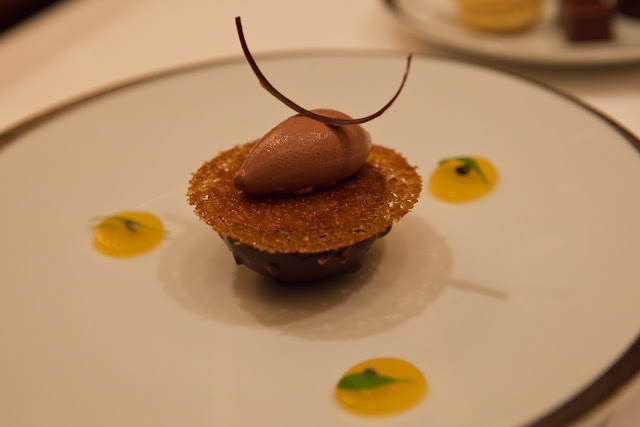 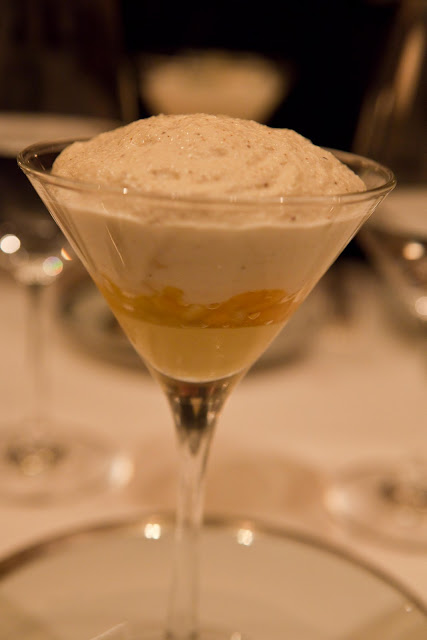 Mango fruits with spices
this was an eye opener but the combination of ingredients used was very very clever!!!! 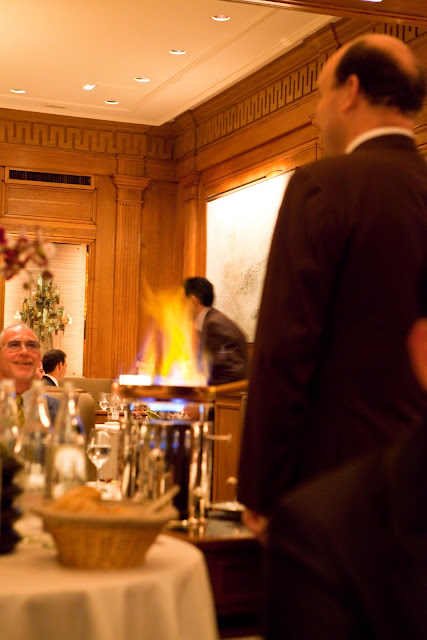 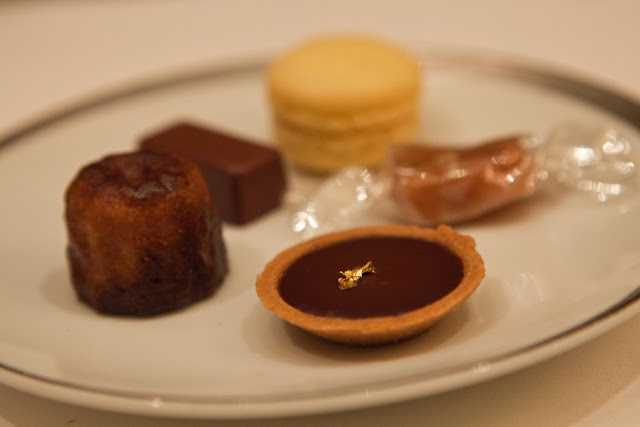 Petit Four
to be eaten together with ur desserts or coffee and tea
here we have macaroons, caramel with sea salt, chocolate tart with gold leaves, canele and chocolate pralines 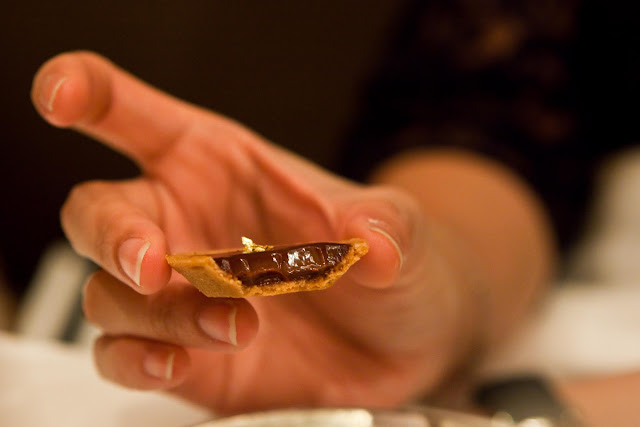 look at that!!!!
the pastry were evenly thin!!!!
how did they even do it?
its fillings was creamie and silky smooth but not too sweet
gold leaves just added some luxx to this baby
the only downside to this pic was my un-manicured nails!!!
kekekekekekeke 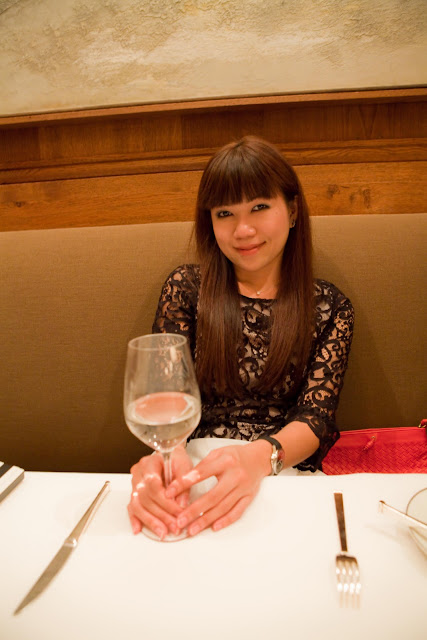 phewww...
after such a grand dinner...I just slumped to my comfy seats
the service here were astounding
you have the whole waiting staff to your disposal
which made u the King/Queen
despite the restaurant running full house that evening
I supposed they made all the necessary efforts to attend to each and every table

On another note, this is another lace dress that I have
been collecting a few now and I think I have more than enuff that it's time to stop
coz afterall, one can't tell if it's a different one from the other unless they are as fussy as me
kekekekekekekeke

with such find and exquisite dining establishment
u better come at your finest
as usual, I felt I'm under-dressed and acting unlady-liked
coz the place, the service and its cuisine outshone everything else
including the next table of Russians heavily adorned in blings that were so blinding

JS...wah... I guess they have to keep up with their 2 Michelin stars!!

Cherry, one looked at the first lobster dish and I was thinking that someone actually measured how far apart each dot has to be ...kekeke

What a brilliant idea to keep the wine labels.. I know ppl keep cork but this is a first I heard to keep labels... :0)

Removing labels is a very difficult task but I saw a "label removal kit" in a wine shop in burgundy :)

JS : DO tell how do you remove a label off a wine bottle! I am intrigued. You obviously bought the label removal kit from Burgundy, then?!

Hye TL. Actually I did not get that label removal kit cos usually back home I will keep the whole empty bottle :)