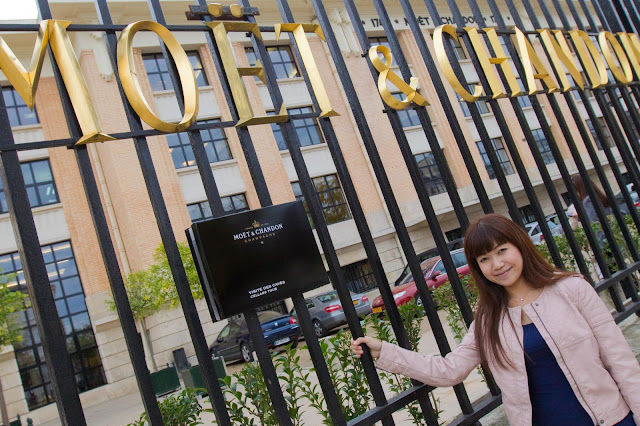 and...we were here
thought of playing touristy in the town of Epernayyes visiting Moet & Chandon is a must
afterall they are the largest Champagne House in the world
*having cannibalised everything else* 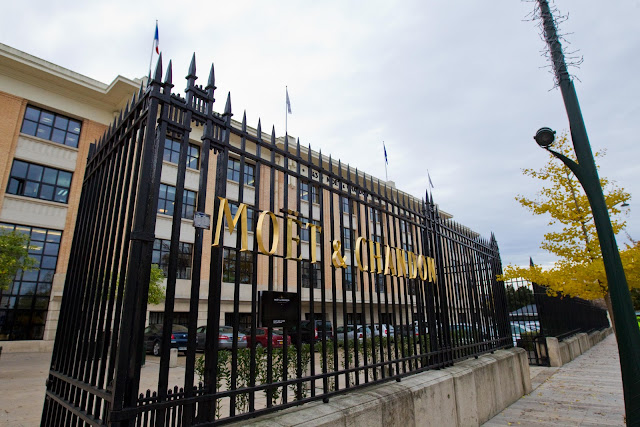 I supposed, everyone's first encounter with champagne has got to start with this brand Moet & Chandon

it's pronounced as Mo-wett & Shah-douh the way Dutch would say it
if u wanna do it the French way, then it's Mo-waay Ay Shah-Dauh
anyway the CORRECT one is the Dutch version
so if u wanna drink it, please say it properly. 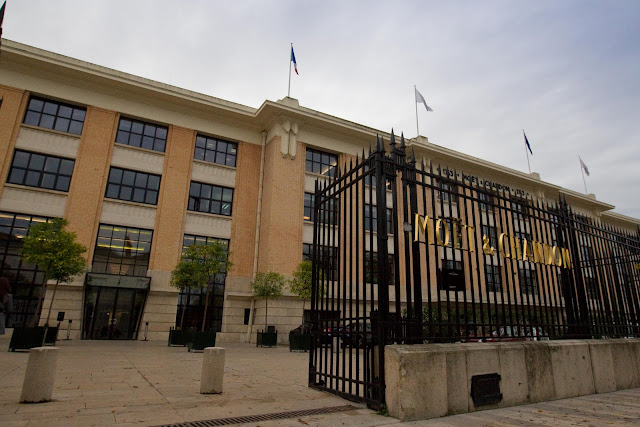 the brand became even more astoundingly huge success and big after it's association with Napoleon
see even those days, ambassadors were important
well having said that, I didn't precisely conclude that he was being used as an ambassador
but connections with certain important notable person is important to market your product/services
*marketing team, point taken* 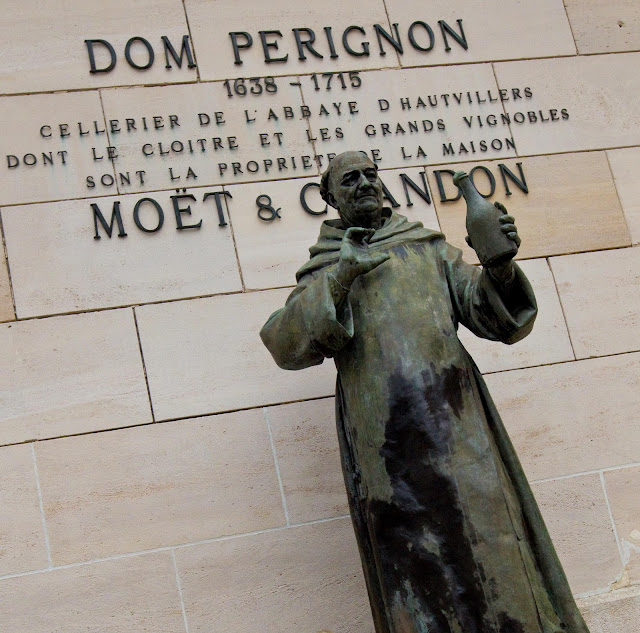 but our passion was not on Moet & Chandon
it's him!!!!!!
the Benedictine MONK!!!!
and certainly he was the reason we came to this headquarter :D:D:D

yeah what does a monk got to do with champagne making huh?
did he bless or bestow the champagne house?
anyhow there was a controversy that he's the Father of Champagne making
yes Monsieur Perignon discovered the art of champagne making by accident
of recent years, some documents found revealed that Perignon was not the first person who invented sparkling wines.... 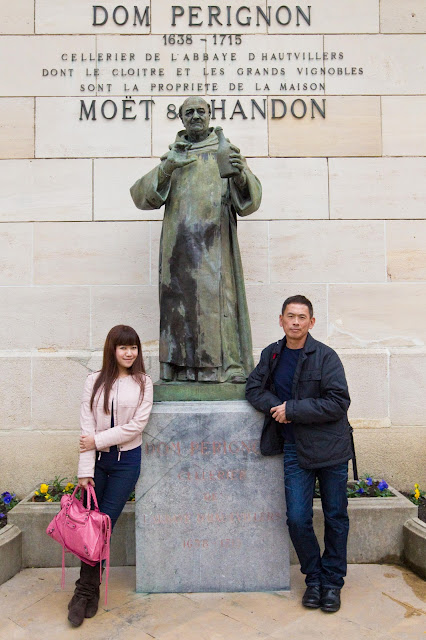 Monkey & JS
he looked rather wasted and bored
coz he's not a champagne man
but THANK YOU anyway for bringing me here
*Dear Readers, I didn't force him here ok...if u were wondering.....*
I would certainly never ever force him to do anything against his wishes...kekekekekeke

again u must be wondering...he passed away in 1715
and Moet & Chandon was only established in 1743
just to clear the air...Dom Perignon is a BRAND by M&C
a very important one and gives them a lot of $$$$$$ 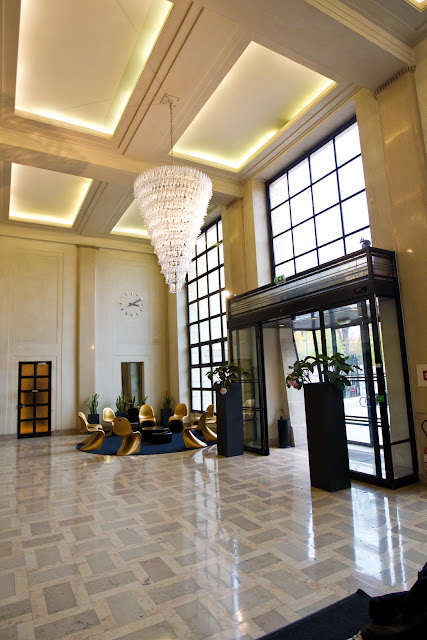 the lobby of the Champagne House
with a beautiful chandeliers made from hundreds of inverted champagne glasses
noticed the beautiful golden champagne chairs?
I wanna drag one home!!!! 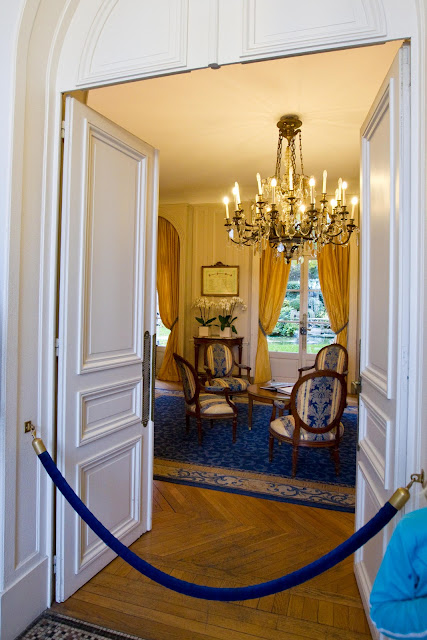 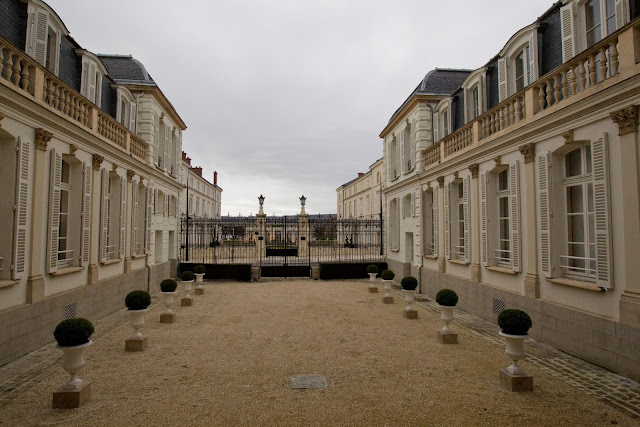 they hold special events at the other side of the road
with another beautiful building with gardens/fountains
just a perfect setup to showcase the brand's creations over the centuries
yes mind u, all these had been in existence since the 18th century 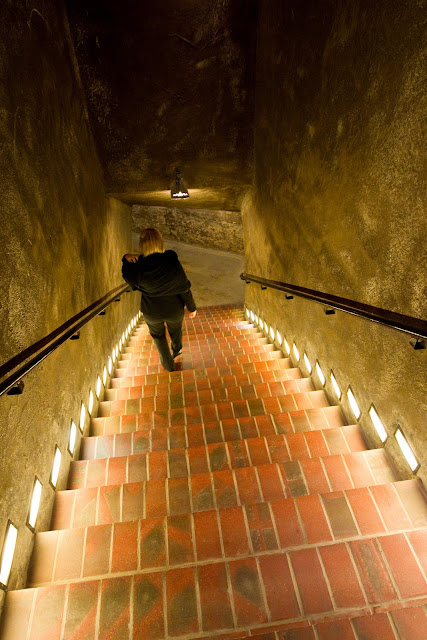 later we were lead down into the cellar
kilometres and kilometres of it
I asked the sweet French guide and she told me "it's 28 kee-loh meh-treh"
freaking 28km!!!!!! 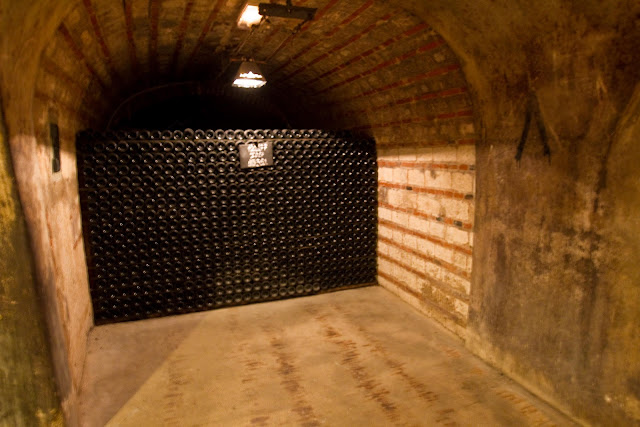 hmmmm this is the case where I dun see any lights at the end of the tunnel
coz there's no ending to this :P 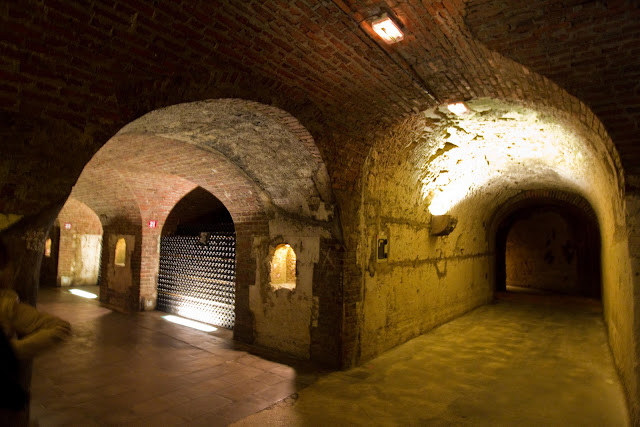 Moet & Chandon proclaimed that they only produced that much
only 35 million bottles
but if we really wanna do an actual stock counts from its cellar to its distribution worldwide
it's definitely more than that
well sometimes too big a number is not good thing for them
so we really truly believed that they have under-reported this
*another point to mkt team.....don't make ur product too MASS unless u r selling candies* 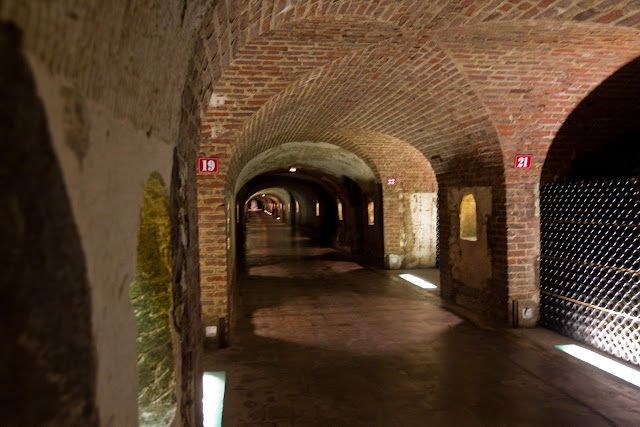 the famous long tunnel dedicated to Napoleon the King
this one I can see lights at the end........hahahahaha.......... 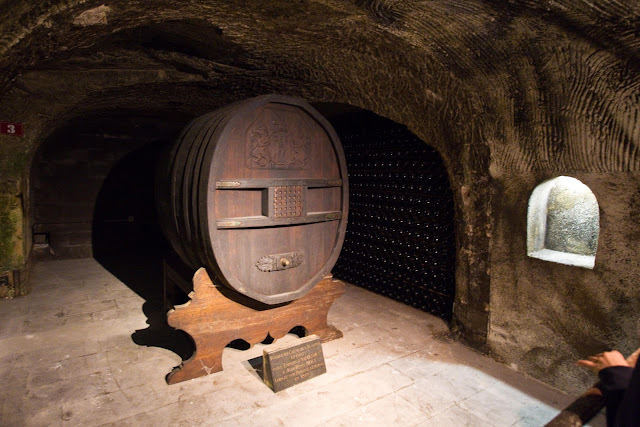 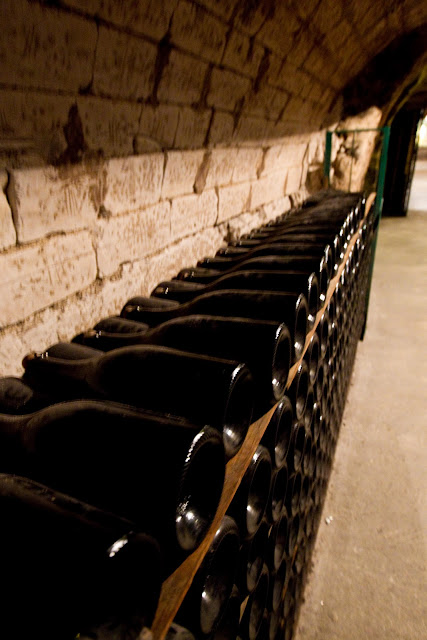 Dom Perignon is special coz it's only produced in vintages
meaning they are only made and produced in the best years
5 million bottles are produced on those special vintages
recommended to age them for 12 years to enjoy its silkiness
so folks it's just in time to pop the Vintange 2000 come December 31st for New Year!!! 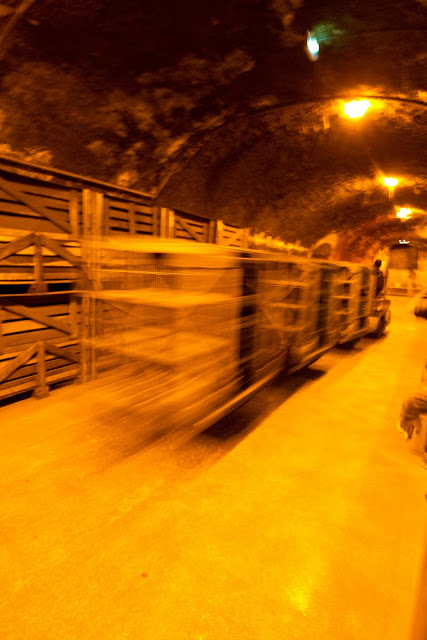 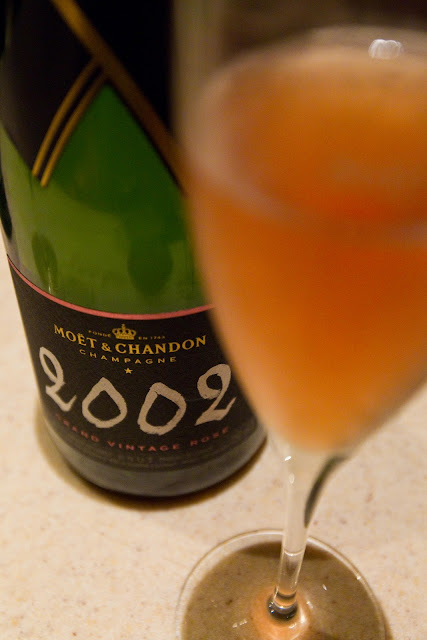 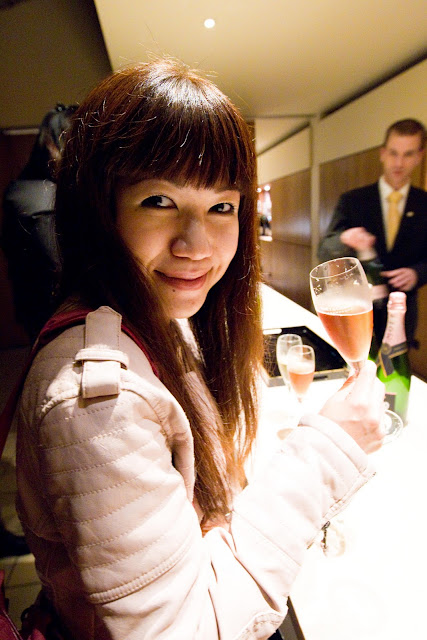 before visiting Moet & Chandon, we had another visit at another maker
so tasting M&C was a bit difficult
:P sorry!!!!

aiks...how come no options of tasting a bottle of Dom Perignon
surprisingly I found out that the current winemaker for Dom Perignon is Richard Geoffroy
hmmm anyway I will blog soon bout the other champagne maker we went to, also called Geoffroy
prollie this family name is as common as "Lim" in Malaysia :P 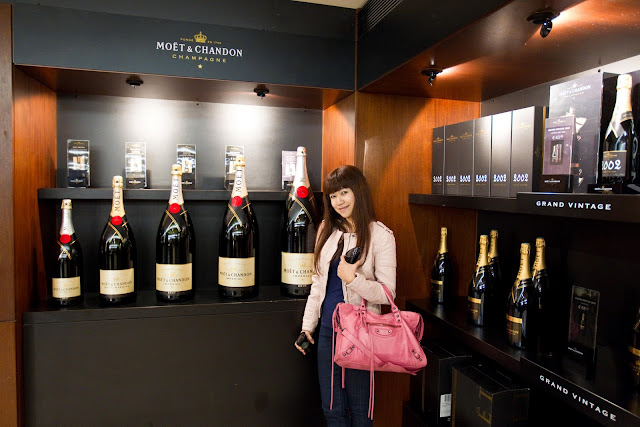 after the visit and tasting, we took some time to visit its boutique
of coz it's cheap coz u r at M&C headquarter
I was looking at all the special DP Enotheque collection....so cheap!!!!
I dunno why the prices in Singapore fetched so high....too high I must say

So I was standing with a few different format of bottles common in champagne
on my left are the usual 750ml bottles called "Standard"
those on the right are Magnum (1.5L), Jeroboam (3.0L), Methuselah (6.0L), Salmanazar (9.0L) and Nebuchadnezzar (12.0L)
of coz there are bigger format than these.....
largest being Melchizedek at 30.0L 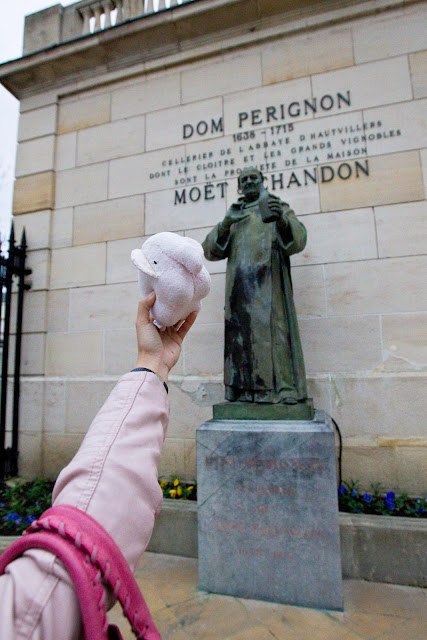 it was a very educational visit
and we went home appreciating bubblies more :))))))))))

Sweet! How come most of the wine cellars all looked so scary... hehehe

And check out those sizes.. never knew they come in all sorts of sizes... :0)

Hye food dreams.
Trust me....For the good champagne, you would want to order the biggest bottle available in the restaurant but for the mediocre ones, you wish they come in 1/2 glasses. Haha.
I personally don't really like these bubblys cos it's too yeasty and I tend to have a slight allergic reaction after consumption! :)