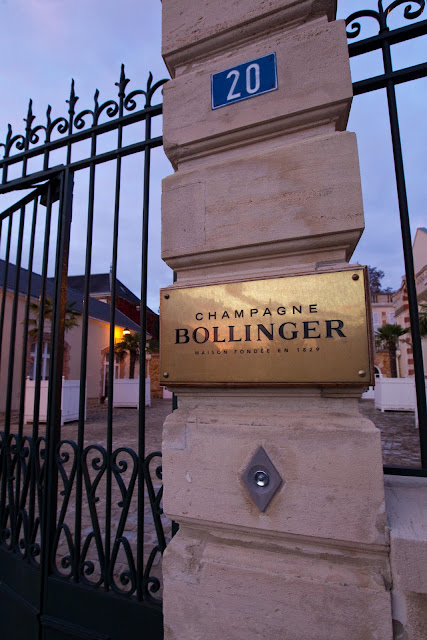 We had an appointment with Bollinger thanks to Alcoholic Anonymous ST who helped us to arrange this :))))))))))))
*no, he's definitely not an alcoholic :P*

we were rushing from the town of Epernay after another visit at another champagne house
and asked the taxi driver in super broken french whether he can drive like Michael Schumacher, to reach Maison Bollinger in time
we didn't wanna be rude and miss our appointment

"aiks....so near only?"
JS answered in amusement:"Now u know this place is really small....the town of Ay." 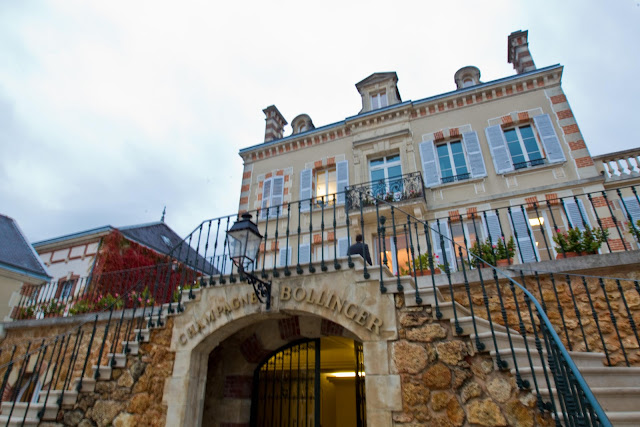 Maison Bollinger is so classically beautiful
u know wat I mean???

Founded in 1829, Bollinger is one of the last few remaining independent Champagne houses
well these days, everything has been being bought over by the Giant-Thirst-Hunger Corporations like LVMH
I dunno how many more independent brands will be left in 5 years time
*my company was almost...almost..... bought by LVMH a few years ago.......gawd....* 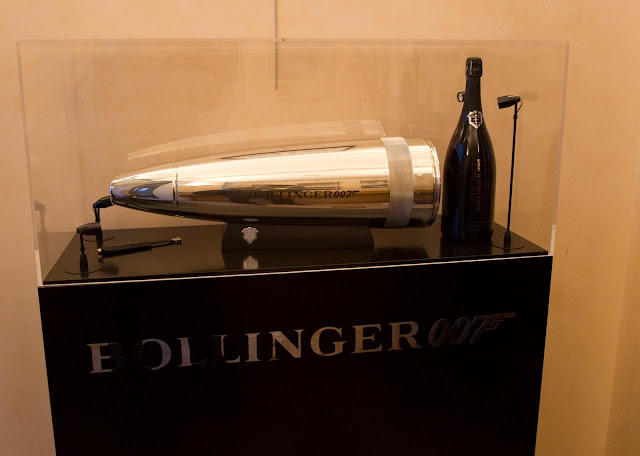 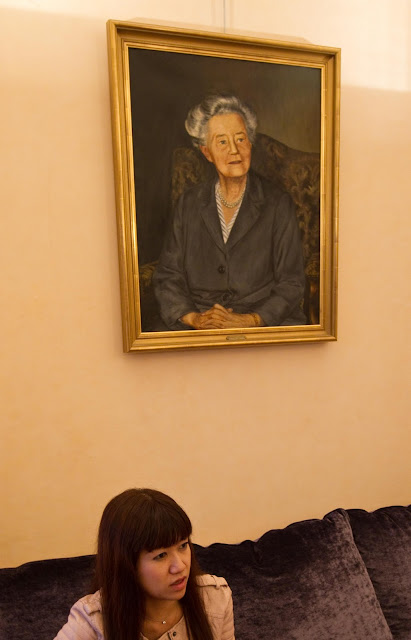 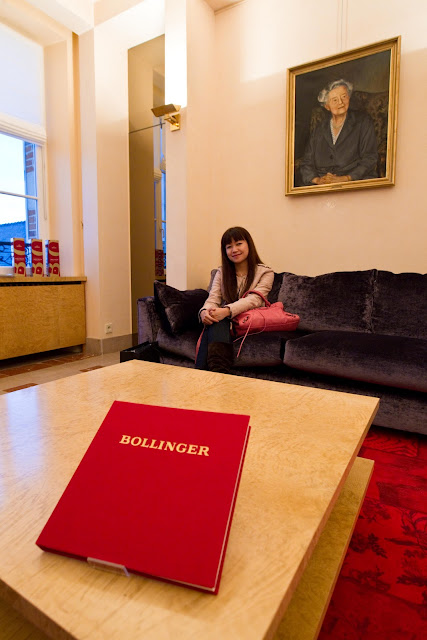 Monkey oso worked very hard.....drinking lotsa champagnes
and traveled around the world too
heeeeeeeeeeeeeeeeeee :D
I know...it's not the same 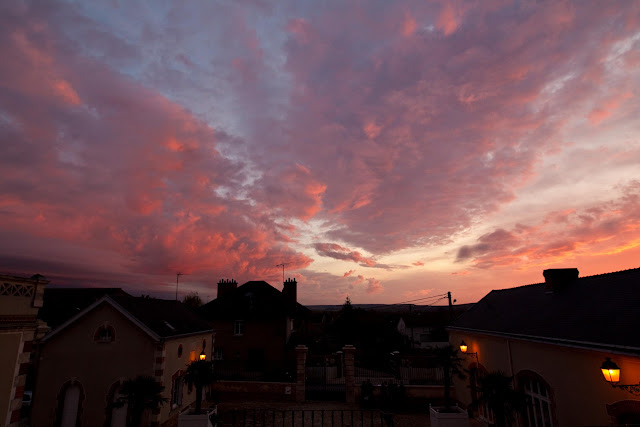 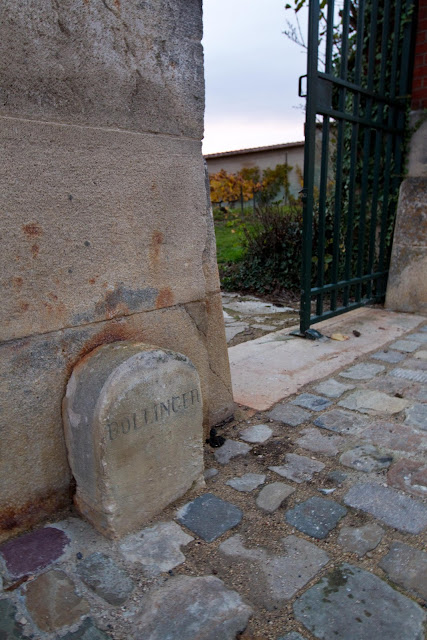 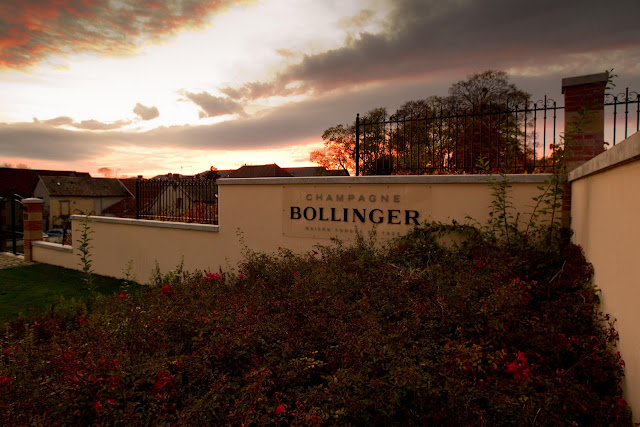 we had a good 30 mins outdoor discussing the plant
yes the the important plant that bear the beautiful pinot noir grapes to make this sparkling golden perfection
and all the challenges in maintaining a great vineyard
safe from diseases and predators *some forms of insects*
coz if it gets infected....everything has to be uprooted and GONE
GONE!!! all the hundreds years of hard work and cultivation 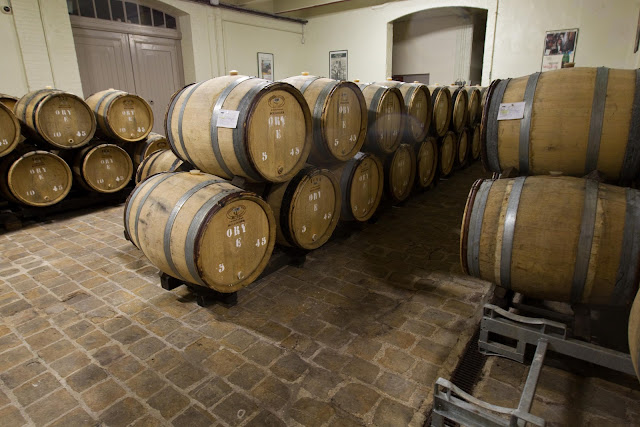 later we were ushered along its properties which stretches along this lil town of Ay
buildings and underground
we walked a bit more in the chill late autumn cool air
along the quiet streets of Ay
passed some houses, restaurants and was lead into another Bollinger Property

I whispered to JS: "Looks like the whole town of Ay belongs to them :P"
JS let out a small lil composed laugh 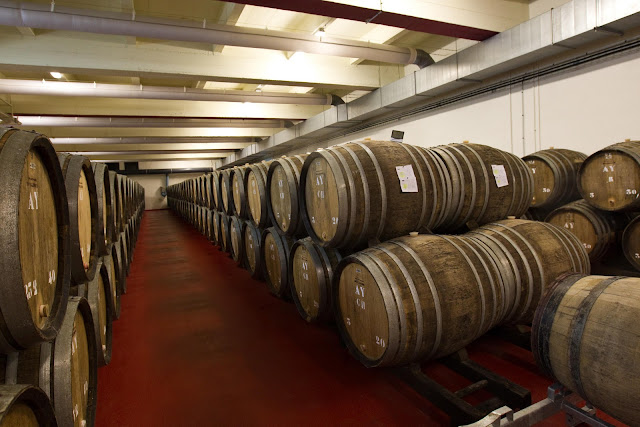 wow Bollinger still ferment their champagnes in barrels????
this practice is almost gone and disappear in Champagne region!!!!!!
these days, all Champagne Houses ferment their bubblies in stainless steel tanks 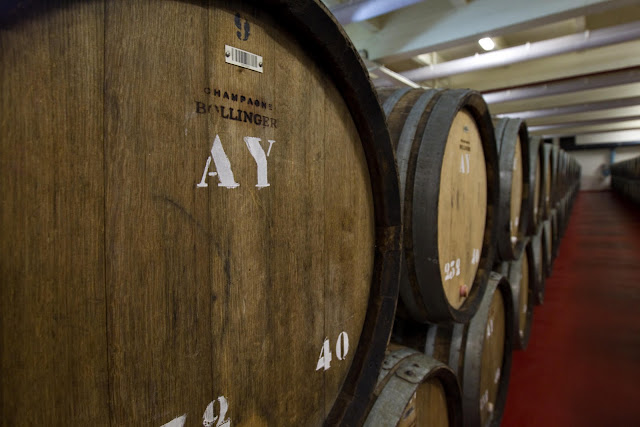 they really stick to their traditions huh?
according to Denis, Bollinger believes in malolactic fermentaion
which can only be achieved with oak barrels
thus creating a much more richer, buttery and rounder tasting champagnes 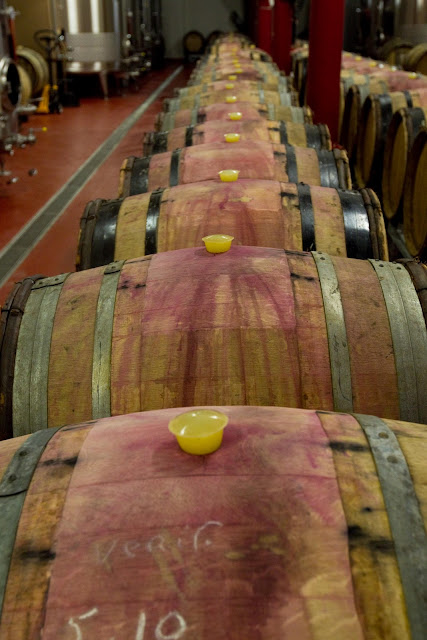 "Denis, where do u get ur oaks??? coz they certainly looked older than me."
Denis: "Hohohohohoho, we buy the oaks from Burgundy. Yes you are right, these are as old as me. They are half a century old!!!!"

that explains the streaks of red marks on the barrels
coz they were from Burgundy....hmmmmm
I wondered if that contributes to the characteristics of Bollinger Champagne 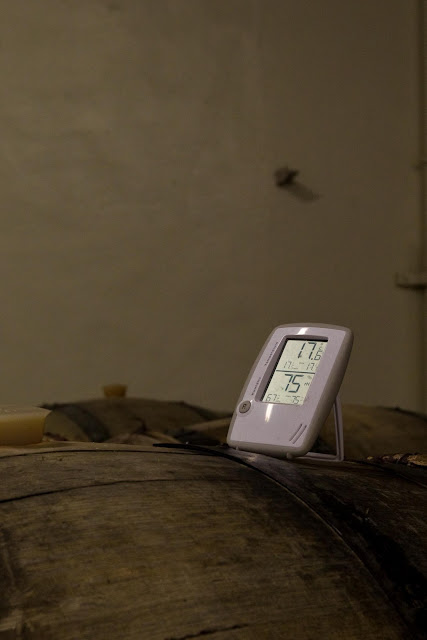 inside this preserved and controlled environment
the temperature was 17.6 degrees celcius with a humidity of 75%
that's optimum coz u dun want this place to be too dry 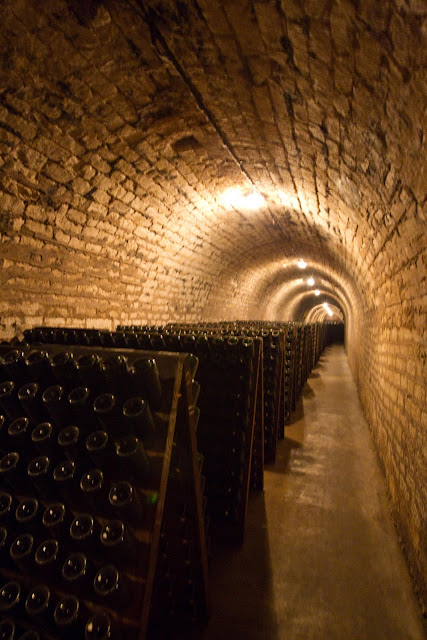 later, our private tour lead us to kilometres and kilometres of beautiful champanges aging inside their cellar which happened to be underground

Monkey to JS:
"psttttt....looks like they own the whole underground of Ay town too!!!" 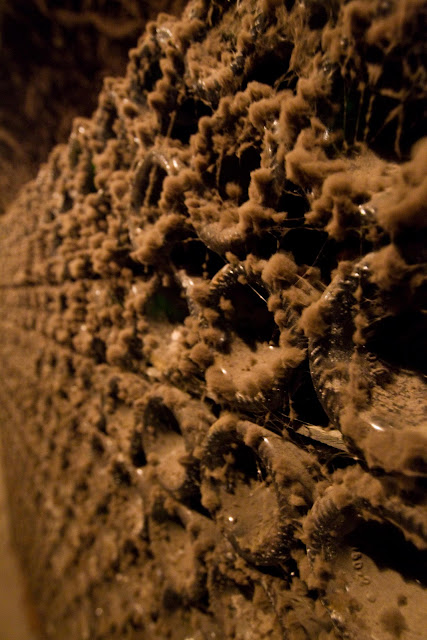 Monkey: "Euwwwwwwwwwwwwww!!!!"
Denis: "Don't worry....we needs this to help in the process."

Monkey: "Those dust are thicker than my attic!!!"
*like I have one??? -_-*
Denis: "It's very important that we have them, and keep them this way.....and we wash them 3 times with machines before labeling..." 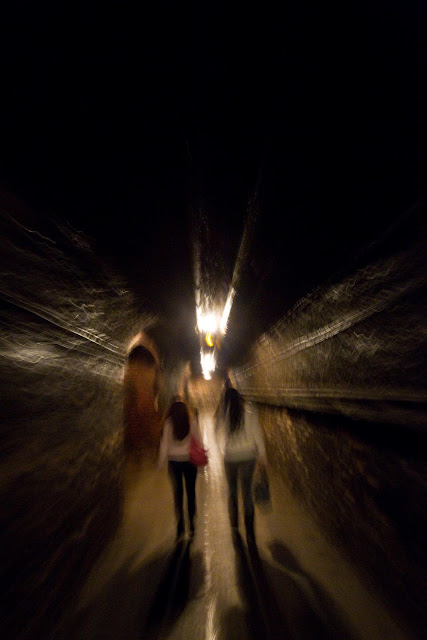 actually the cellar was quite creepy
in this pic...no it's not wat it seems....
it's the entrance to another cave...not some hooded ghostly image with a hood
kekekekekeke

Once out, and breathing into the chill air
trying to orientate meself...I was surprised to find us at the garden
"Wow....we are here already!!!"
Denis: "Oui Madame, now if you follow me, we'll do some tasting :))))" 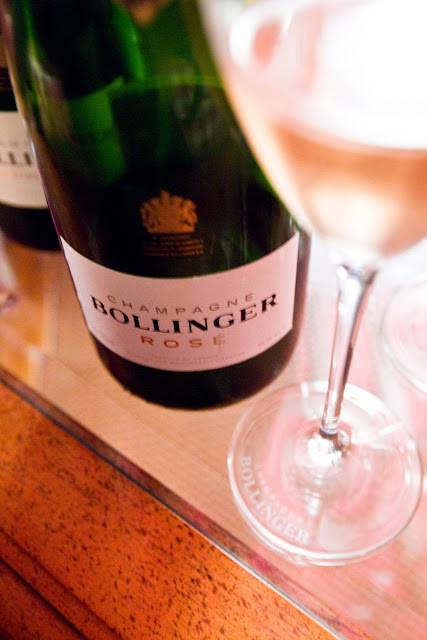 a bottle of Rose, which they added exceptional red wine from the Grand Crus plots
consist of:
62% pinot noir
24% chardonnay
14% Meunier

Bollinger tends to age their champagnes longer than the other houses
they have one of the most outstanding collection of 300,000 magnums bottles
of wines which they saved from every harvest *mainly grand and premier crus*
these they aged for 5 to 15 years 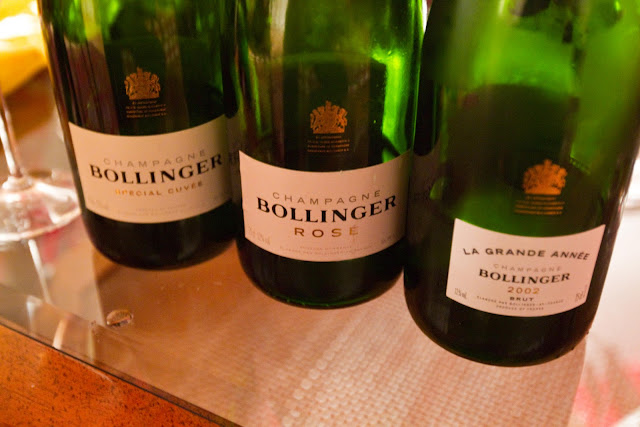 we had tasting of these....
my favourite was the La Grande Anne for its body and length
fermented entirely in barrels from only pinot noir and chardonnay grapes
all of its productsion are 100% grand and premier crus 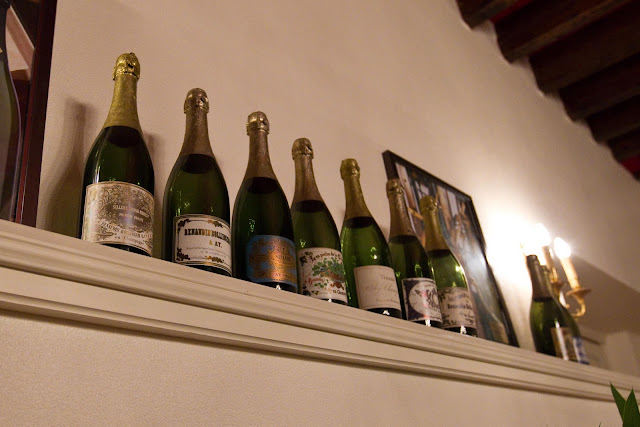 only 3,000 to 5,000 bottles varying depending on vintages
*just to give u an idea and comparison vs MASS production of Moet & Chandon of 35 Million bottles a year*

:))))))))))))))
it was such an educational private tour
and we learnt so much from Denis *Thank Gawd he speaks perfect UK English*

I guess every French said the same thing....
Parisiens and Frenchs are 2 different people huh
so just bcoz u've only been to Paris doesn't mean the French behave that way too
kekekekekekekeke

Big Hugs to Alcoholic Anonymous ST for this arrangement

For more reading on Bollinger:
www.Champagne-Bollinger.com

Oo.. so nice to be able to visit Bollinger and I never knew you have to aged champagne like this!

I have tried Bollinger Special Cuvee and it was quite fabulous!

You know.. JS's pictures of scenery are so out-of-this world... does he just stand there for a while waiting for that special moment or was he always this lucky to be at the right place & the right moment to capture gorgeous sceneries of the sky? ;0)

Thanks food dreams for dropping by and the compliment too :)
Actually I think I am quite lucky to always encounter nice landscape and spectacular lighting conditions......and I think the more patient one gets the more lucky one gets :)

JS is just too humble :P

I think with experience and "eye" for your surroundings, u'll be able to capture wonders effortless-ly
:))))))))
that's wat most renowned photog told me :)))))

Basically if you wanna compare the bubblys from the different champagne houses, go ahead and drink the "village" equivalent and for the case of Bollinger, it's the special cuvee which is a blend of many vintages and for me this one beat moet chandon's equivalent hands down!