I am finally home after all these~~~~ 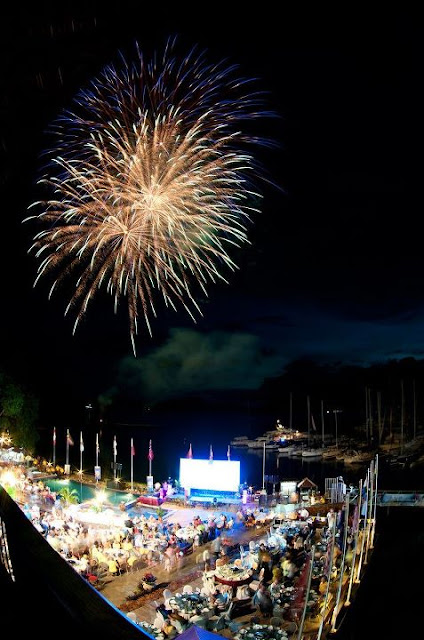 Fireworks at the closing dinner and awards presentation 2 nites ago
I would like to start this posting with a "booming" pic
which was also stolen elsewhere
coz I didn't bring my camera, and the only gadget I've got there was my phone and iPad

and last nite Monkey touched down safely in KLIA fr the Mystical island at freaking 8.45pm
looking red, fatique and hungry~~~~~
trust me, the food in Langkawi could be better but it just didn't..... 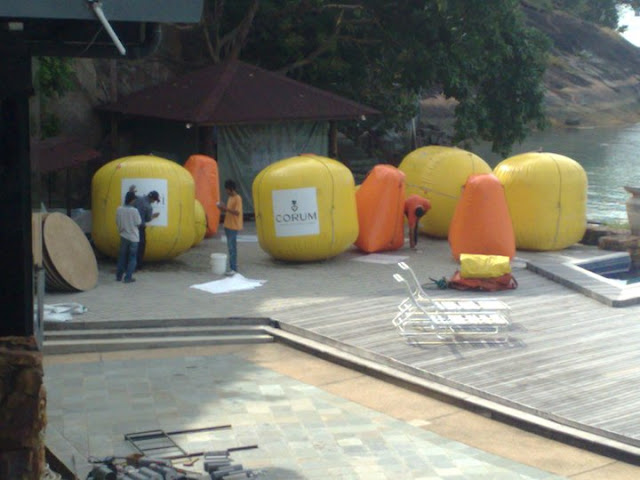 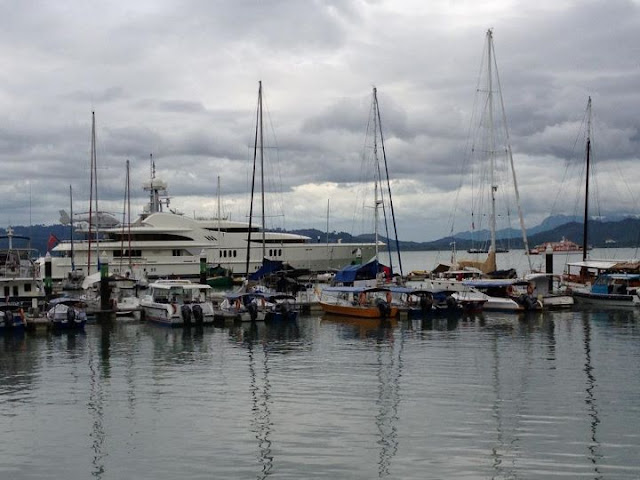 everyday the weather is looking like this....overcast early in the morning
followed by very very hot sun in the afternoon and ended up with RAIN
GAHHHHH
but this year the Regatta enjoyed very very very good wind
well in sailing u need wind dont' cha?

something I really need to post up about the hospitality on this island
everyone is so so so warm and welcoming
the Locals here are a true living example of 1Malaysia
there isn't segregation of colors, races, religion but everyone is a Malaysian here
Locals here worked as a team, together to achieve their goals
there isn't the lazy bums nor the calculative one
they worked overtime for the event with dedication
but most of all they worked so happily and joyfully with each other
Life isn't hectic
they can find time in between work and lunch hour to fetch their kids to fro school
home to work is 10 minutes away
everywhere is just so near away
and not to mention the island is also duty free 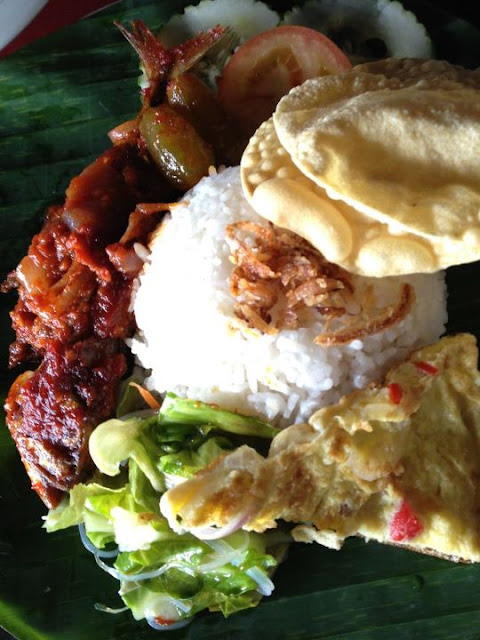 after 3 days suffering from the "customised event" menu....I think I had enuff
*u know the usual ang moh food like chicken chop, burgers, steaks, fries, sandwiches etc*
guess my face showed so much....they actually asked me if I dun mind eating their "staff food"
and I had to ask wat's the food like for "staff food"
*hey Monkey be thankful and just eat...dun b choosy*

"Staff food" are usually served on the catering stainless steel trays to be picked up buffet style
whenever the staffs have got time to eat
and not to mentioned, served inside their hot wet kitchen

the team was SO SO SO SO SO SO DARN NICE & SWEET
they actually served it like the above to me!!!!!!!!
on a nicely roundly cut banana leaf the size of a plate
with extras like cut tomato and cucumber, topped with fried shallots and 2 pieces of papadam
I mean it's not like something gourmet but their kind thought of serving it this way

oooOoooooo trust me the "staff food" was so much more delicious than the usual chunky burgers with thick fries!!!!!
plus they didn't charge me for it -_-" 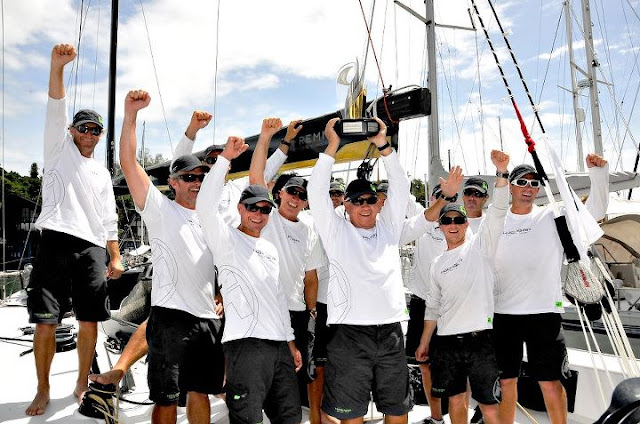 *pic stolen from the event organiser*

everyday all the international teams took onto the water with new determination
amid the ferocious winds, some team suffered broken sail, disappointments and lost hope
they had a great time
bcoz everyone is just so so friendly here
it's almost like there isn't a competition at all!!!!!

and finally newcomer Hooligan won the Regatta
leading the points everyday, they really deserved this 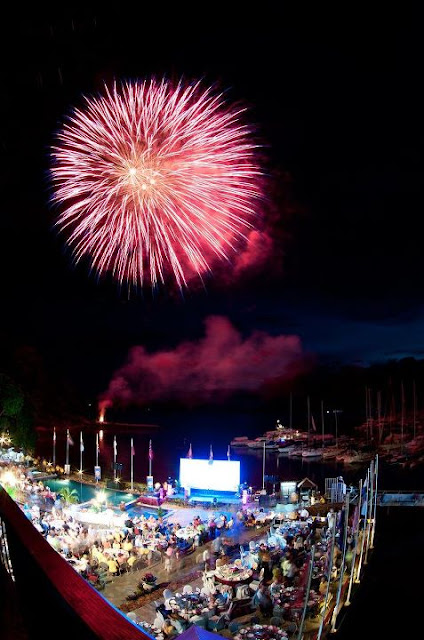 and on the Final Night, it was the prize presentation
with Guest of Honor - Tun Dr. Mahathir and his beloved wife Tun Dr. Siti Hasmah
among the Royalties, all the Panglima panglima and more Tuns and Tunkus, Tan Sri Datin Sri
the list was loooOOoooong

we had a good weather that evening, watched the sunset over the horizon together
with laughter heard over the deck
yep the dinner was held under the starry starry nite at the deck with a swimming pool by the harbour 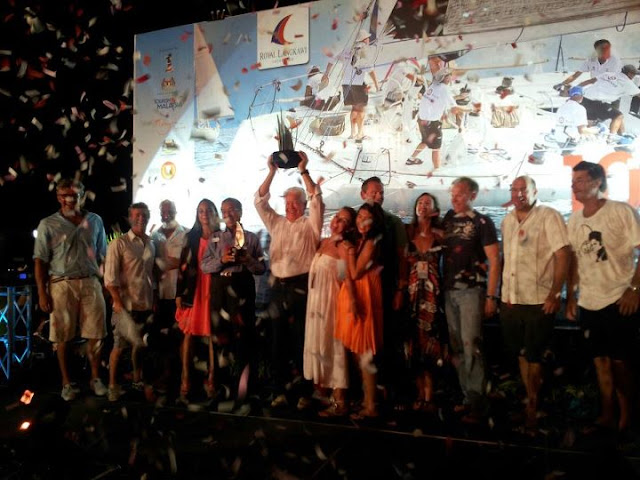 and the final prize presentation to Team Hooligan
can u spot Tun Dr Mahathir next to the owner of the boat Mr. Blackmore
Mr. Blackmore is also the skipper for his team 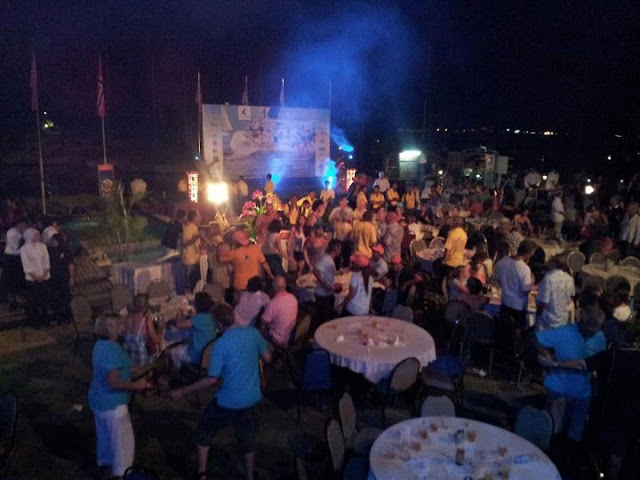 after all the formal speeches and prize presentation
it was time to let ur hair down and partay!!!!!!

well at this Duty Free island the alcos never run dry!!!!
the tap kept on flowing golden liquid be it champagne or beer
drink all u want till u can't drink no more 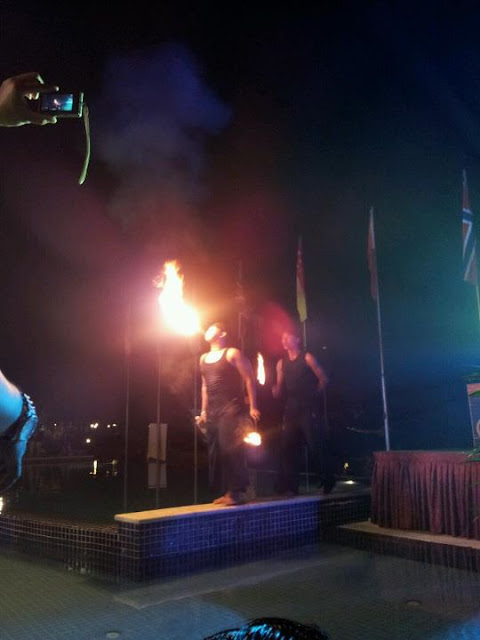 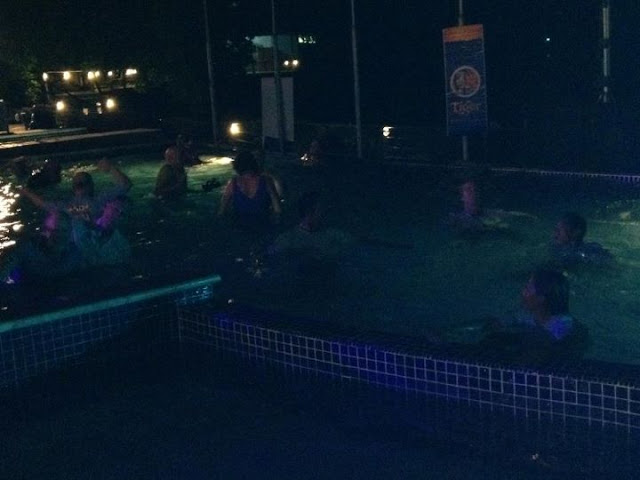 and before I know it, the pool was full
hahahaha they were actually dancing inside the pool
arms were waving, hands were splashing, heads were swinging
guess they had too much to drink
and if u r not too careful and stand too near...
u might as well got urself pushed/pulled down
the above pic was taken METRES away with zoom hahahahaha, hence the quality

didn't matter where u came from Australia, NZ, America, Europe, or Asia
everyone had a great time and made so many new friends 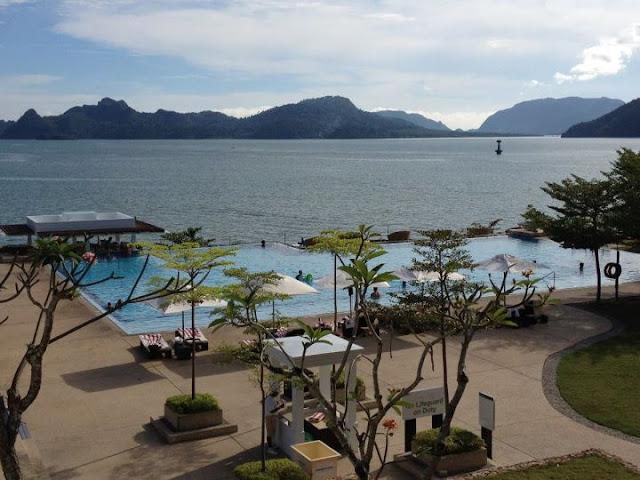 the next day......everyone was trying to be sober
the skippers and their team were busy washing and tying their boats
to prepare for its sail back to their home country/ next destination
Yacht Club staffs were busy unpacking and washing
and us....busy dismantling our showcases as well
ready to be shipped back to Switzerland

we managed to finish early and steal some time to chill out at Westin
of coz we didn't stay at Westin
hahahahhahahaha
at this peak period, it's just too expensive
prollie another time or at least for the final nite we'll stay here 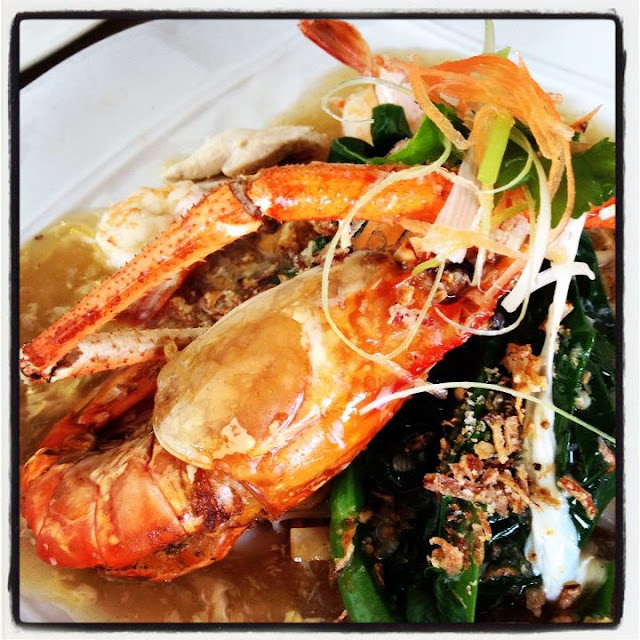 the hor fun was excellent with "breathe of fire"
but the huge ass prawn wasn't fresh and as usual a "heavy" complained was lodged
the waiting staff actually push the head chef out to explain to us
poor chef, he looks like he couldn't handle us so we weren't too hard on him

well another year another regatta
till we meet again folks!!!!

Excerpt from Event Organiser on a story with all the BOAT/Team name innit!!!
very creative!!!!

Once Upon a Time……

At long last all the racing in at the Royal Langkawi International Regatta had come to a close for 2012. The FREEWIND sent all the boats happily to shore where it was time to head to the CABARET in PHOENIX. The noise from the HI FI there could easily cause a TANTRUM for the whole ROYAL QUEENSLAND YACHT SQUADRON! SMYSTERY to me how NINA and EVELINE could happily dance the JING JING with a drink of BAIANA in each hand!

At the bar NIJINSKY was in BEAUX ESPRITS to be sitting next to MATA HARI and KAMALA. Then in walked that RASCAL SKANDIA, which we all suspected was only a NOM DE PLUME for WARISAN DUYONG. Nevertheless, he complained in FORTISSIMO voice how HAFFIMAN had gone out and lost MY TOY.

We knew that SMU didn't MIND THE GAP at SEA LEVEL so when he tucked the SKYBIRD into his KATSU it was inevitable that VIRGO and UTARID would come running out to meet him.

Meanwhile, that HOOLIGAN JELIK said goodbye to TEAM LANGKAWI and took a rocket out to URANUS to use the ATM for some money to get chicken at MYA/KFC at the megamall FANTASIA.

I can tell there were loads of fun & beer!! you wanna hire an assistance pls? :P

Hi Food Dreams!!! No I definitely can't afford u hahahahahaha
plus we worked too hard here :P