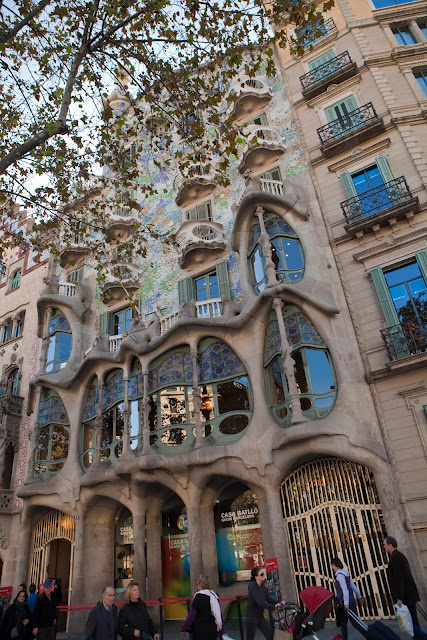 We arrived at 43 Passaig de Gracia and looked up at the weird looking building
yep we are at the right place
this is it!!! this is the building we wanna visit 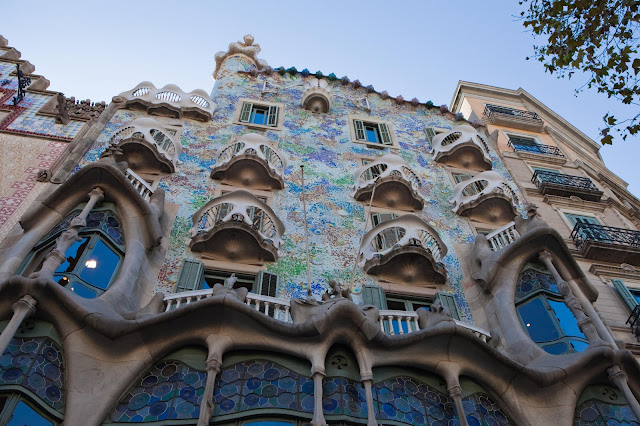 we looked up and saw how weird it was....
like a screaming circus among its boring peers


I wouldn't say it was built by Antoni Gaudi
*the one that was killed by a tram while crossing the road on his way for Sunday mass :"(((*
he merely renovated an old apartment into this!!!!
this magnificent beauty which is now the National Treasure


but back at his time, it was considered something too unorthodox and beyond their time
The public dun get it.......it was an eye-sore....and not a sight to behold...
they called this....the House of Bones
sigh...... 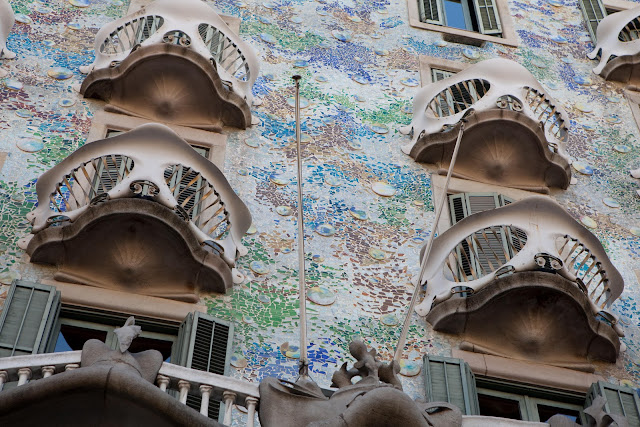 every part of this home has got a meaning
behind every curves, every tiles and every colour
be it for aesthetic or functionality Mr. Gaudi managed to integrate them all


Antoni Gaudi was commissioned to renovate and re-design an existing apartment
for a middle class family - Josep Batllo back in 1904
WOW I dun wanna imagine wat high class ppl stay in those days :P 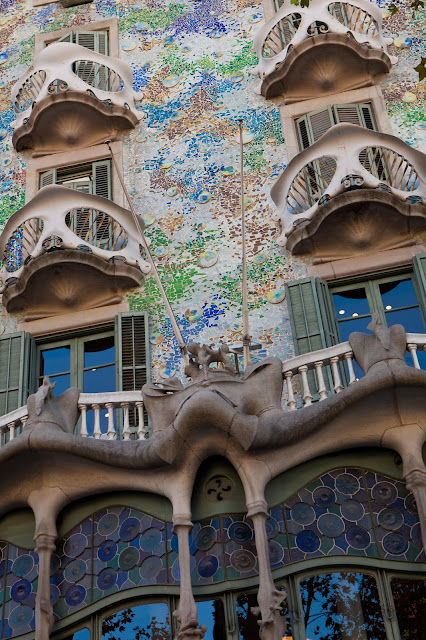 
Notice the broken tiles/mosaics piece in waves of different colors?
Gaudi designed it to depict the colors of the sea from a bird eye's view
*Barcelona is next to the sea*
it is the color of the sea during a sunny day, a cloudy day, a stormy day and during a calm day
look at the pic again.....it's like the reflection of the Sun on a waving undulating Mediterranean Sea 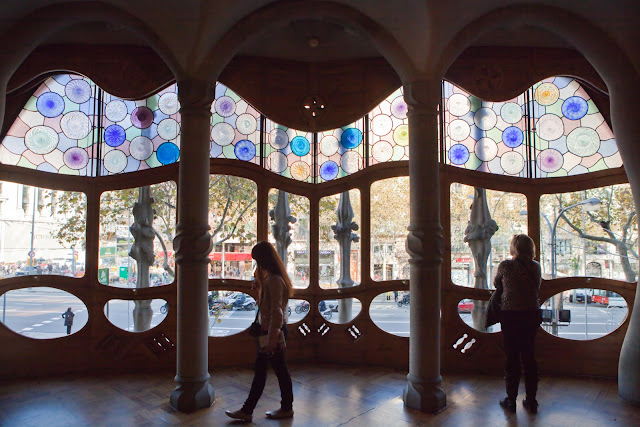 the Apartment/House is now a museum open to public *only since 2002*
having being maintained and owned privately, it's entrance fees was above the normal but trust me, it's worth every penny u have in ur pocket!!!


Seen here in the above pic, Monkey was inspecting every nooks and corners like a foreman
I was busy gasping and oohhh-ahhhh-ing and marveled at the refurbishment works of Gaudi
"Oh my GAWDDDD look at that!!!! this guy is a perfectionist!!! He's a crazy architect!!!!!"


The window that u see above faces the main high street of Barcelona
we were on the 1st floor
it was designed in a way with no obstructed view of the street plus...do u notice there's no LINES n its windows??? it's all CURVES
CURVES in all dimension 360 degrees
I pity the carpenter guy :P


the windows can be opened too
there's a mechanism innit, when lifted the whole panel with all the windows opened unisonly
T_T
how did he do that? and mind u, the windows are all curved!!!!


the story behind this main room was...he wanted to depict the undersea world
with beautiful corals, colors, shapes and textures 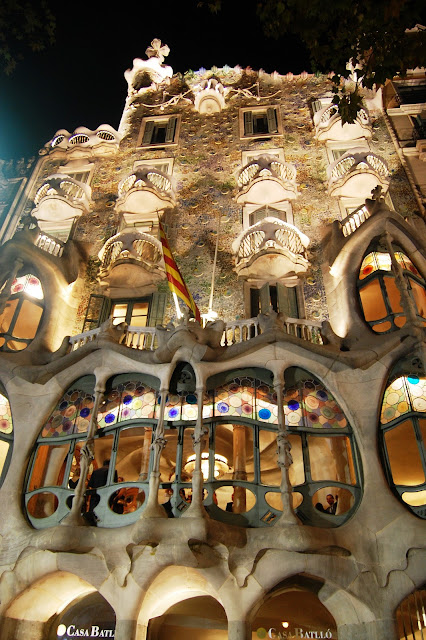 *pic stolen fr the web*
this is how it looked like at nite!!!
so magnificent!!! beyond words :))))))
the main hall was really designed "to see and to be seen" 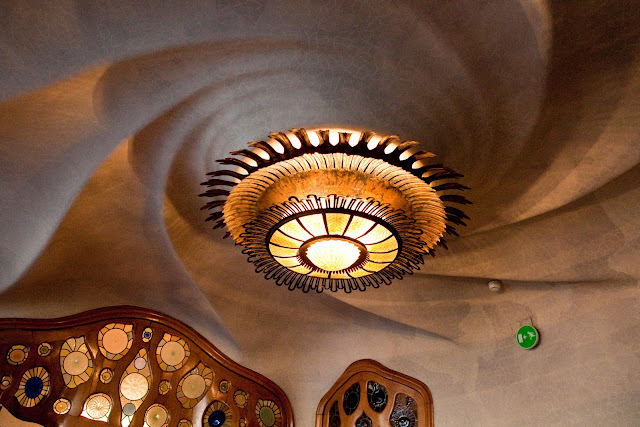 Gaudi thought of everything for the house including its ceiling
look!!! there's really no straight lines!!!! everything are curved!!!
it even has got a SeaShell ceiling light 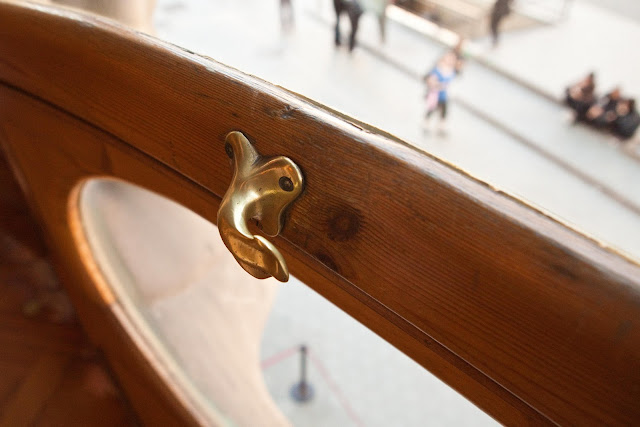 
later we found out that there's no mould that he could use to make the knob
he actually use the soft plaster material, put his hands innit as though he's opening something to create a mould for all the knobs in da house
hence all knobs fit perfectly into any hands, any palms
coz it's very very VERY ERGONOMICS


I put my Monkey palm on it
there's a place fitting my THUMB perfectly
my fingers rested peacefully on it
and my chubby palm feels good on it
:))))) didn't know opening a window could be an ART hahahahahaha


and bcoz of that, I had the tendency to touch everything in this house haahahhahahaha
"Hey look look look.....!!!!" and started touching everything including those with warnings signs
JS -_- pengsan....and vowed never to bring this Monkey out again......
"Orang Kampung" he said.... 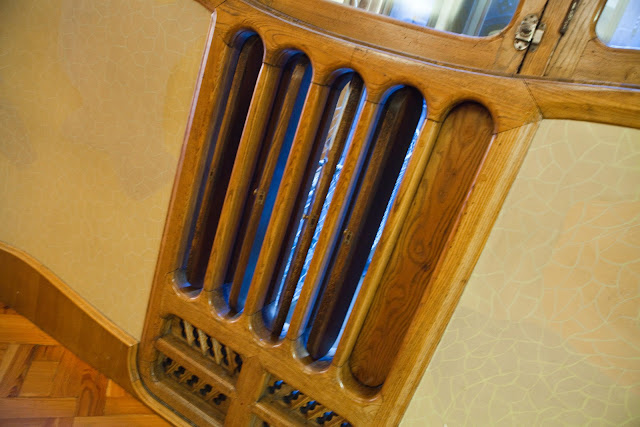 designed to looked like the Gills of Fish
it's actually to ventilate the house
when it's too cold, just shut them
else push its lid opened and u can feel the fresh air rushing in
oooooo how clever!!!! 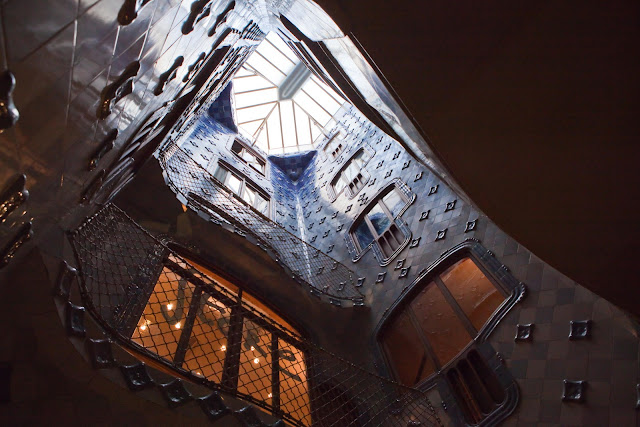 all the fresh air came fr this "Air/light Well"
not only did it provide air, it also provides the source of life - LIGHTS
balconies has got a "net" design, looks like fishing nets 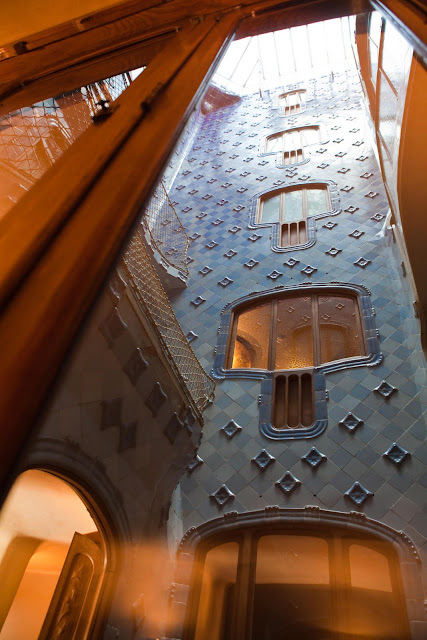 so at the end, u achieved this results....of an evenly colored "Air Well" with uneven colored tiles
hahahahhah u get my drift? :P
also noticed that the windows at the top are smaller
it gets bigger at the bottom bcoz u dun need so much of lights at the top
bigger windows allow more lights in
at the bottom of each windows, there's the "Fish Gills" air ventilator 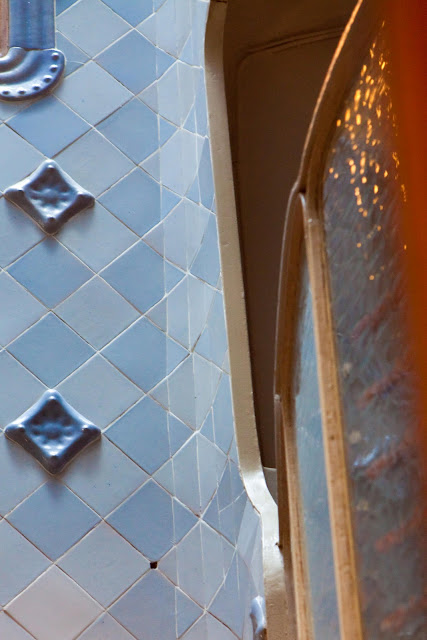 
can u imagine all the meticulous work
and the number of tiles broken to meet the perfect match to its curved walls?
I wanna faint thinking of it


and after assembling them, it has to look this good and symmetry!!!!!
at this point I can confirm that Antoni Gaudi is either a perfectionist or he is just a mad architect 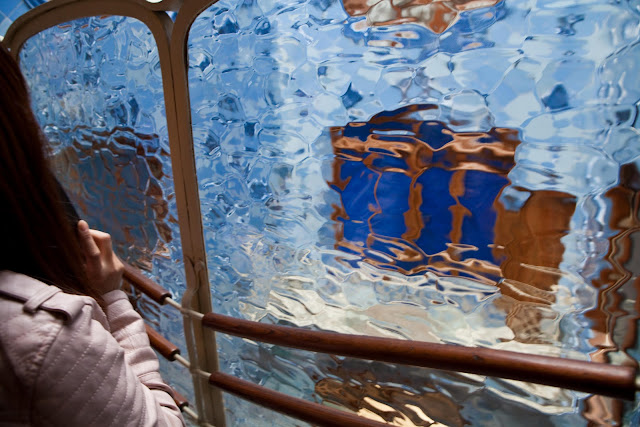 inside the same air well is the lift shaft and staircase
he built a mirror separator that looked like the above
so as u ascend and descend it feels like u are inside WATER!!!
he's really crazy to have thought of this.....for a middle class family....-_-" 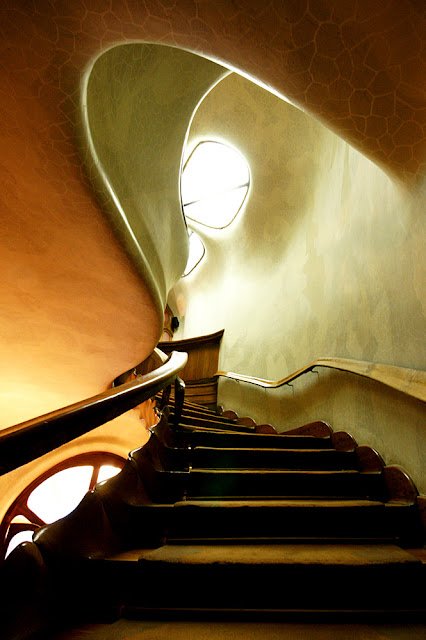 *pic stolen fr the Web*
at this juncture I wanna belt out "Under the Sea" by Sebastian from the cartoon Little Mermaid
and I can't help singing it in my lil heart
coz I felt like I'm in one
:)))))
everything about this home is so organic....and ergonomic....
and functionality with aesthetic beauty
the handle on every stairway was moulded accordingly to a human's hand
so as u ascend/descend holding on to it...u feel like one
with the stairs...
yeah sorry to repeat this but I need to stress it again....ONE with the Stairs
*makes me wonder how it feels like sitting on the toilet bowls of this home* 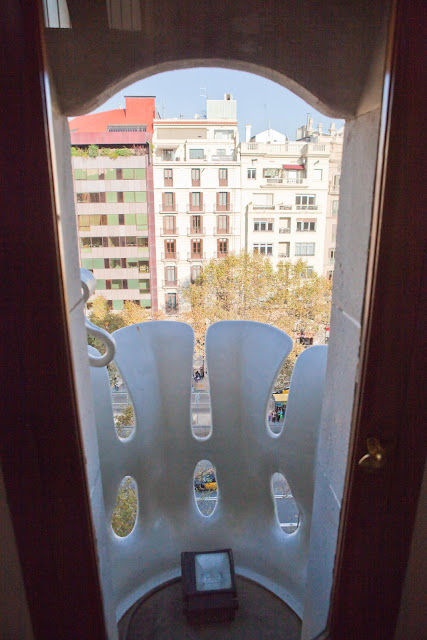 at the top of the floor we looked out at the opposite apartments and saw how it was like originally
the original apartment was actually built by Antoni Gaudi's teacher - Emilio Salas Cortes
I felt like a mermaid popping out fr a beautiful giant clam at the balcony
look at the tiny balcony with white shell!!!!
aaAAAAaaaaaa
*Under the Sea continued to play in my head*
hahahahahahhahahahaa 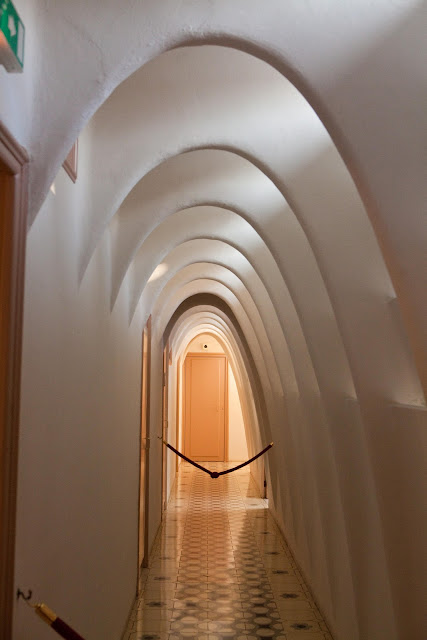 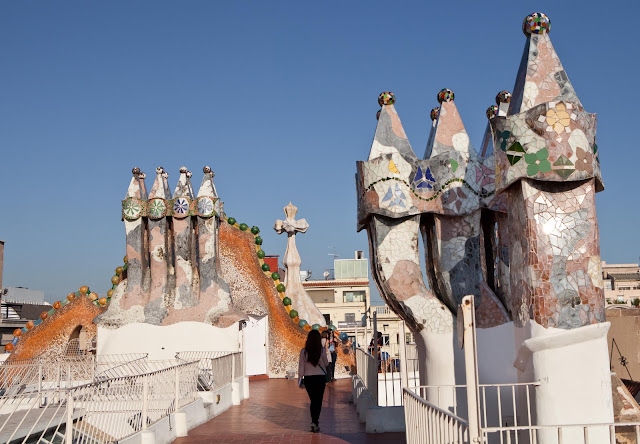 we climbed our way to the rooftop
OMG!!!!!
why would anyone wanna design such a beautiful rooftop????
look at the chimneys!!!! 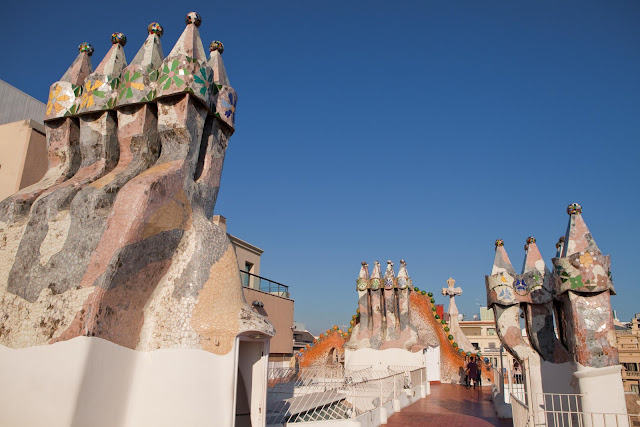 
Antoni Gaudi never fails to mesmerise and surprise ppl huh?
and because of that Casa Batllo is now a World UNESCO Heritage Building 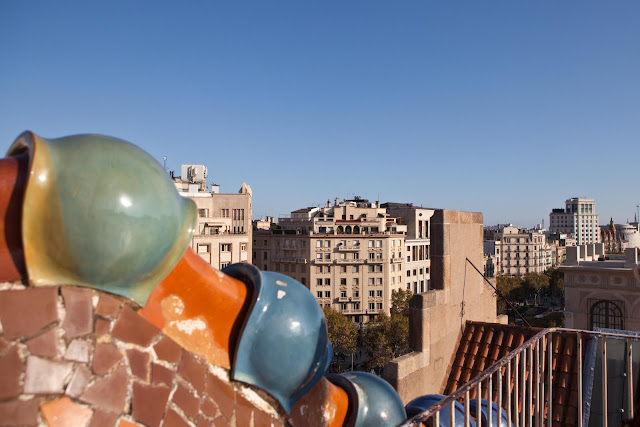 from the top we could see the whole street and its neighbourhood
hmmm now wat is this that's blocking my view in front of me???
I'm too short I need to hop a lil to see the street downstairs 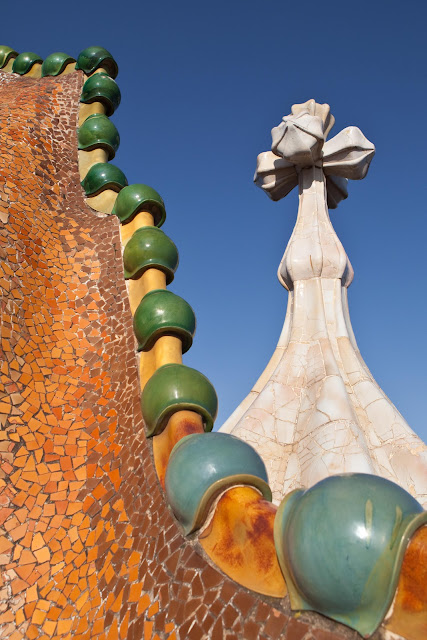 
just look at the detailing of the tiles
the colors.... to create the depth and dimension of the dragon 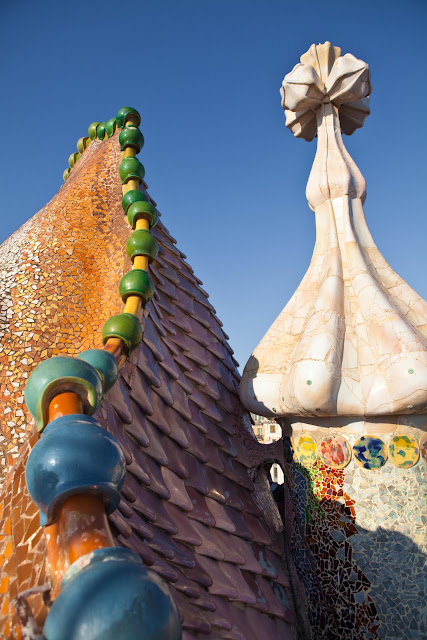 man......at the facade facing the main street....the scales were beautiful laid
those scales = roof tiles
-_-"
sweat man!!!!!
We risked our lives to snap this pic for we had to lean against a railing to capture this for u!!!!


Antoni Gaudi was the reason we went to Barcelona
*okie lar the food as well tee hee hee*
yes I have yet to blog bout his other works....u can just spend one week here visiting his works
it's everywhere in Barcelona
from the beautiful Sagrada Familia Cathedral to more private homes


he was a Man beyond his Time
hence no one could understand him
well I alwiz believe Extraordinary People are Eccentric
and u can't just be eccentric...it's almost u have to be born with it


I was so sad to read his story
dedicating his lives to all this beautiful arts and remained single
working non-stop
and got run down by a tramp >.<
since he's eccentric, he dressed really shabbily and no one could recognised him


thinking that he was a beggar, nobody....not any passer-by, took him to the hospital
in the end, a kind policeman sent him to the hospital with a taxi
with no documents on his body, he was not being treated
not until 2 days later, when finally...somebody recognised him and gave him proper facilities & treatment


I think Life is the most powerful and precious element u ever own
doesn't matter you are rich or not
so treasure it and make full use of your Life
:))))))

I have to credit you for providing all the information and details plus all the names... I would have pengsan...

the building is uniquely beautiful.. and I think the builders also must have all their hair pulled out building every curve... hehehe!

Gorgeous and I really dunno how you & JS always manage to find such gorgeous places to visit! Thks for sharing... :)

Such amazing work of art, but a sad ending to his life.

I have never seen anything like this, curved, colorful, intricate.. astonishingly beautiful!

Will definitely visit this place when I plan to go Barcelona :)

He was definitely an architectural genius who was way ahead of his times.........and definitely every contractors nightmare :))

Hello everyone, sorry for late reply.....

Yes when opportunity arise, all of u must go and visit Barcelona because there's loads of Gaudi's work to admire :))))... So there's more than iberico ham and tapas in Spain