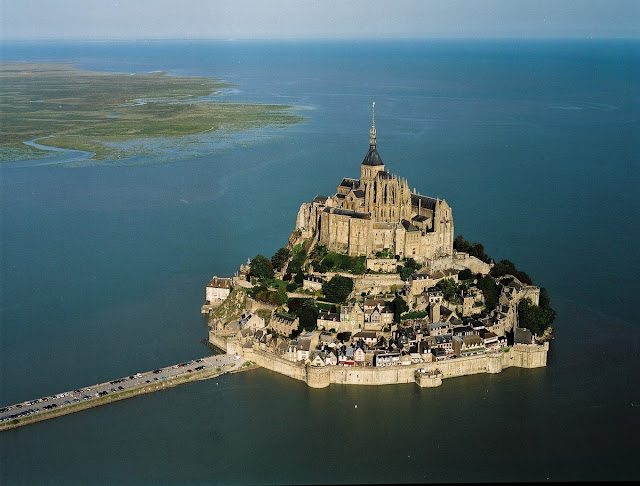 *pic stolen fr the web*
Remember this??? when I posted about it months ago *click here to read*
gosh how time flies and that was almost 2 months already
so today we will share with you on our journey to this wonderful mystical place
Mount St. Michel
It's alwiz wise to ask a local where to go and what to do
in fact this place was never in our itinerary until we asked Monsieur Denis of Bollinger Champagne
we wanted to venture somewhere new in France and of interested worthy sight seeings and FOOD!!!!
food alwiz have to be part of its package hahahahah
Monsieur Denis then recommended a few small town
especially Rennes a lil town in North West of France
it's a place where he'll go for relaxation
and so after that conversation, we hit the internet to find more information
JS was so eager n keen that he dragged Monkey straight to the kiosk to get First Class train tickets
it's alwiz good to plan early bcoz when u purchase early, ur First Class ticket is only half price
HUAHAHAHAHAHAHAHAHAHA
booked our hotel in Rennes and read more about interesting places there
soon pics of Mount St. Michel were plastered all over my iPad
"Hey look!!! I saw this on TV before!!!! we must go!!!!"
yeah I know we were so prompt rite?
it's alwiz our style to hit one city, find out more from locals and venture to a new place.
it happened in Barcelona and now in France. 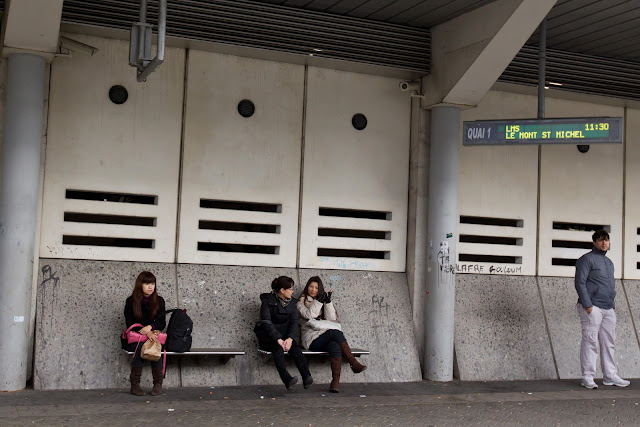 so 2 weeks after the above conversation....and also after venturing to other places in France, UK and Spain.....we were once again back in France and all prepared for Mount St. Michel!!!
the fast train takes about 2 hours to Rennes, one of the most connected city in Brittany
from there u can hop onto a bus to Mount St Michel
Bus station was just across the road fr the train station
here I was waiting at the bus with some tourists from Japan
Mount St Michel is very famous among the Japanese bcoz it is a sister city of Hatsukaichi in Hiroshima
the surrounding, topography and visuals were highly used in Japanese Games
some games also featured a replica innit
Remember the lyrics to Year of the Cat by Al Stewart?
"and the bus and the tourists are gone"
heheheheh if u dun plan ur trip well and check the schedule, this will happen
we were reading on some travel forums, some tourists were stranded coz they missed the last bus or train at certain smaller towns
JS & Monkey alwiz alwiz alwiz find the most efficient connections between trains to trains or to buses
well even flights so that we dun waste time 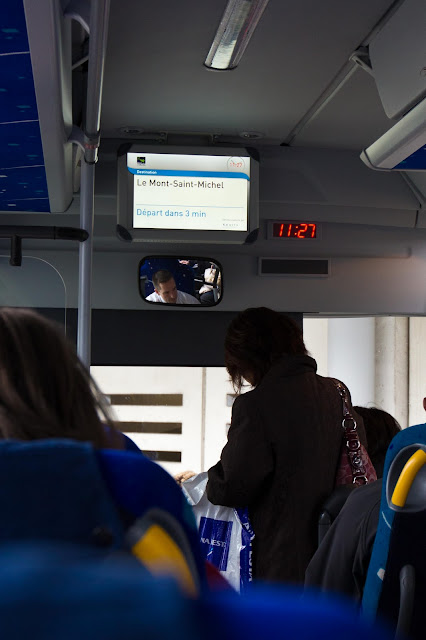 our 11.30 bus came early and left on the dot!!!!
very punctual :))))
u need to prepare exact change for the driver
they dun speak english but one can communicate in the international universal language - hand and sign language.....hahahahahahaahahaha


the bus was very clean and comfortable....
even the windows were spotless!!!!!
can't remember the last time I took public bus but this ride was a very comfortable one
they even make us wear seat belts.....no standing up while the bus is moving...
else the driver will stop the bus and come to ur seat until u r buckled up!!!!
Safety is no small matter here >.<

the journey was a pleasant one with beautiful sights along the countryside
weather in Brittany is alwiz like this
over cast sky, gloomy and wet
coz it's near to the sea, to be precise the English Channel 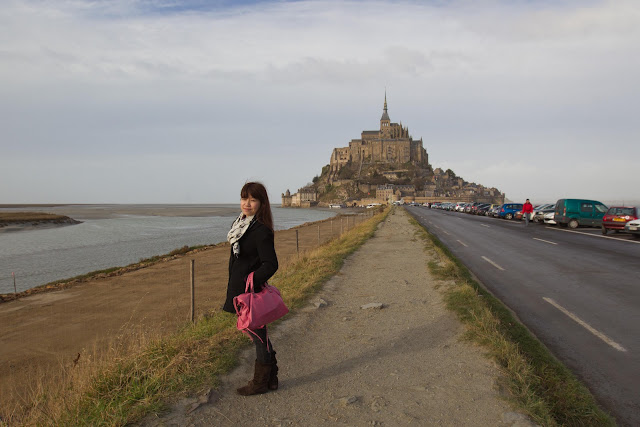 
what a beautiful sight!!!!!
beyond words....
in fact the bus went all the way and stopped us at the foot of this mount
but we walked back towards the mainland to snap more pics 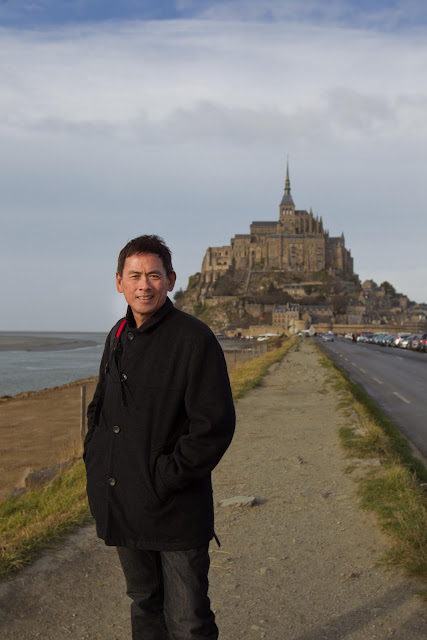 it was very windy, even JS's short hair were flying in flurry
hahahahhaahhahahahahhahahhaa
he couldn't open his eyes
it was indeed very very very windy~~~~~~~ 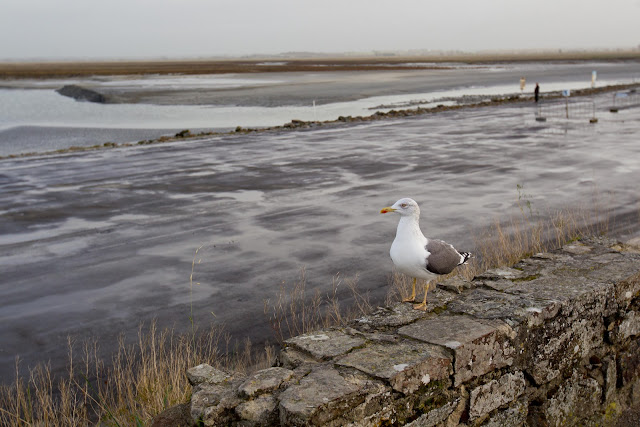 even the seagull can't open her eyes
kekekekekekkeke
and when they fly.....they just flapped their wings....and stay motionless on the air
they dun move.....coz the wind was so strong they had to flapped harder to move
else it's just a stationery flying bird on the air
it was a weird sight hahahahahahahaha 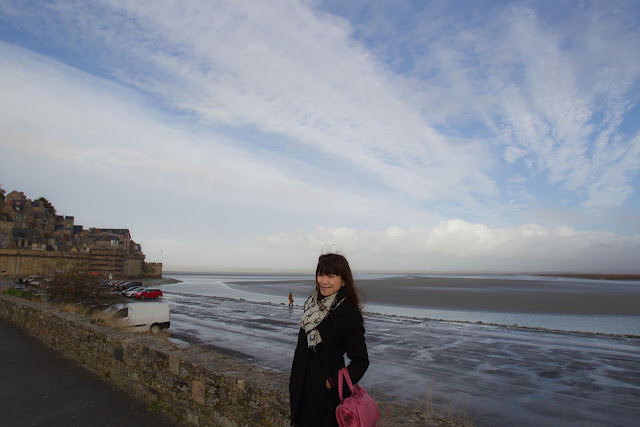 it almost noon and we were hungry
kluuuuu kluuuuuu kluuuuu~~~~~
with only 41 inhabitants on this island
meaning to say only 41 ppl live in this island u can't expect much right?
but wrong.......
there's hotels and restaurants and facilities 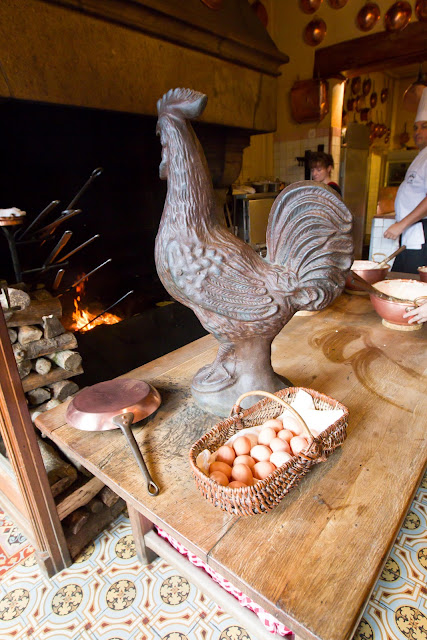 we went to the famous La Mere Poulard that specialised in omelette
u must be wondering....wat's so special about it
created by Annette Boutiaut in the late 19th century, this place is also a hotel
she invented this quick egg omelette to satisfy hungry visitors and it became a staple of the restaurant these days
we took some time to watch the process :))))) 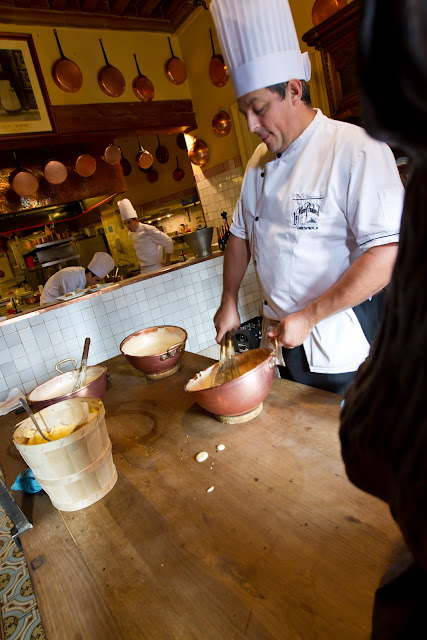 hmmm the Chef has got such good complexion
flawless almost like he's wearing makeup with a tint of rose blusher....
:P
see that huge tub over there?
it's a damn HUGE TUB of BUTTER!!!!
Brittany is also famous for butter
the best butter in the world comes fr here :)))) 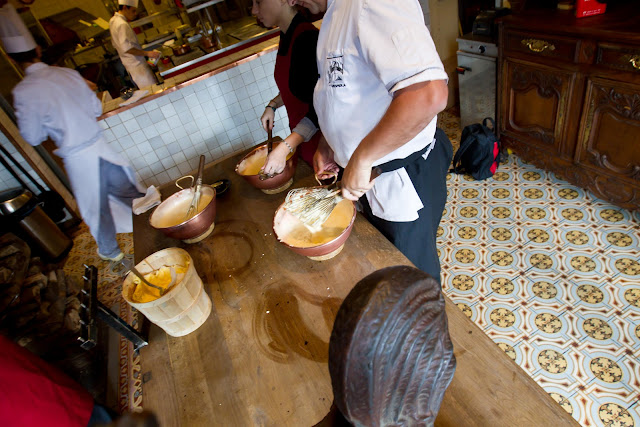 beautiful fresh eggs were cracked into the copper bowl to be whipped ferociously by the Chef
he used 2 whisks to add more power to his whisking efforts *macam double motor hahahaha*
and whipped in as much air as possible to make them fluffy
it's almost like making egg souffle :)))))) 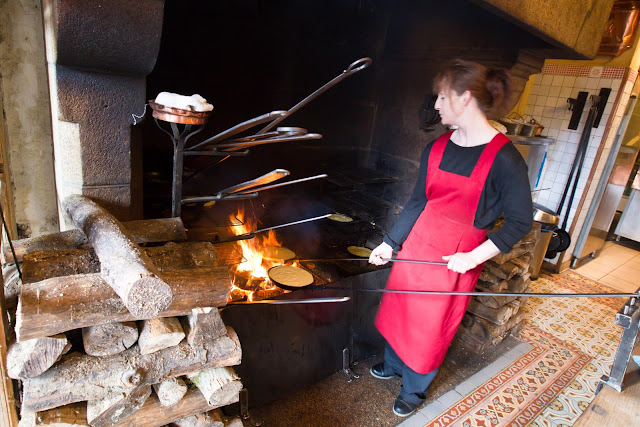 each cast iron pan were dunked with a generous spoonful of butter
then the whipped eggs were poured in...
and cooked in the open wood fire!!!!
wuahahahhaah my stomach(s) were crying in joy!!!!
can't wait to sink my teeth in them :)))) 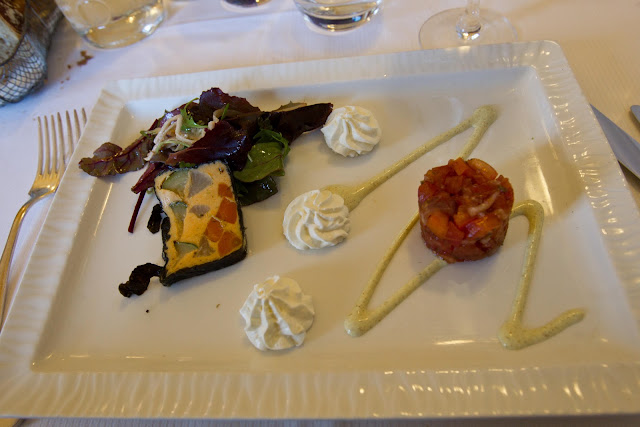 our appetizer of vegetables terrine and tartare
nothing to shout about coz our minds were so locked onto those EGGS!!!!!! 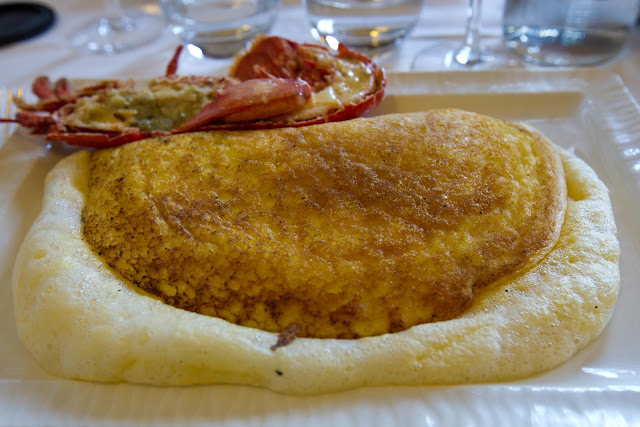 my LOBSTER OMELETTE!!!!!
ohhhhh look at that :)))))
it's fluffy and airy on the inside
while the outside was crusty with some burnt off the cast iron
while the lobster was so fresh and delicious 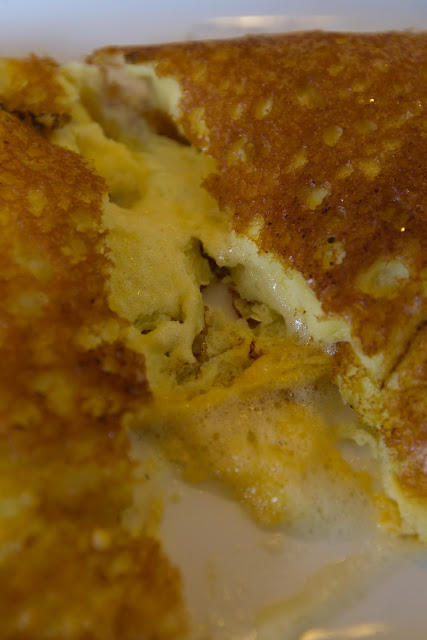 when u tear them apart....ohhhhh myyyyyy gaawwwddddd
while I was hearing "oooiissshsiiiii des ne" fr the next Japanese table...
u can only hear OMG on my table :P 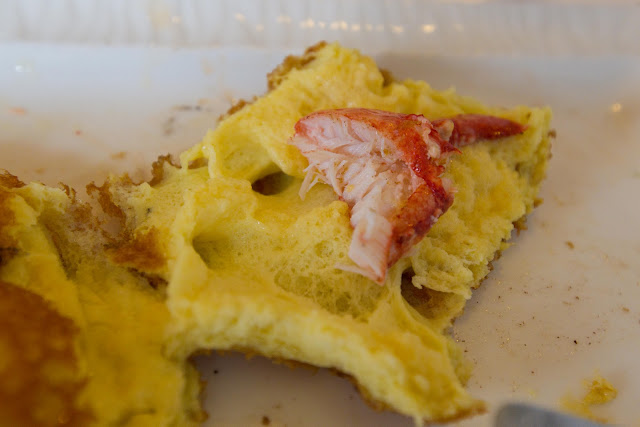 if I have this for breakfast every morning...
sigh....to die for....totally worth coming here for :P
the omelette has got sufficient seasoning and taste
u can actually smell the eggie goodness innit... 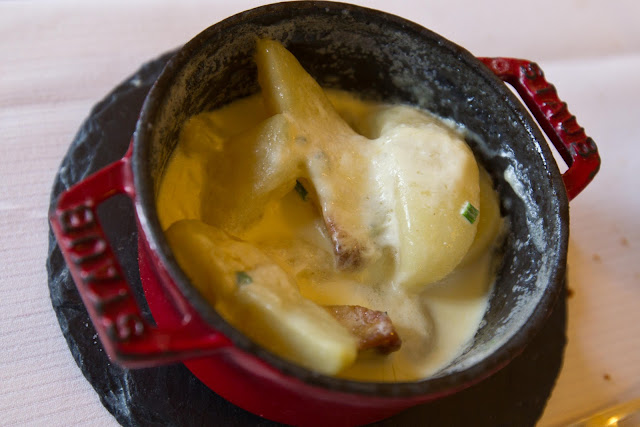 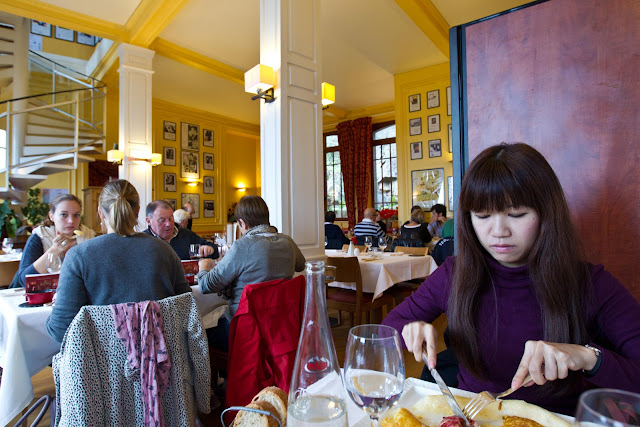 I'm a slow eater...coz I enjoy my food thoroughly
every morsel every bite
and I'm alwiz appreciative towards invention, creativity, taste and ingredients being put together for any dish


while JS is the total opposite, he eats everything in such lightning speed
so usually he'll spend the rest of his meal time, snapping ugly pics of me chomping food in such unsightly manner -_- 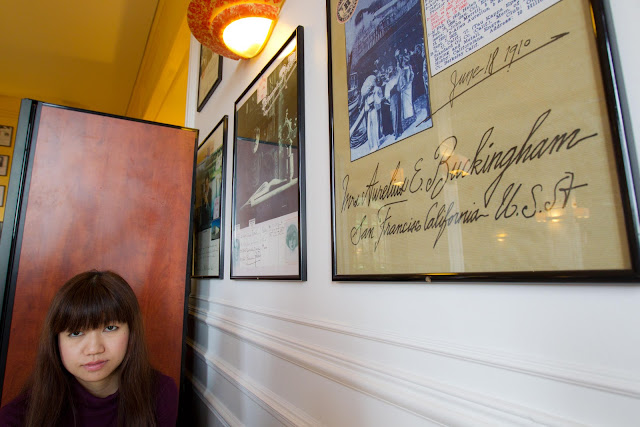 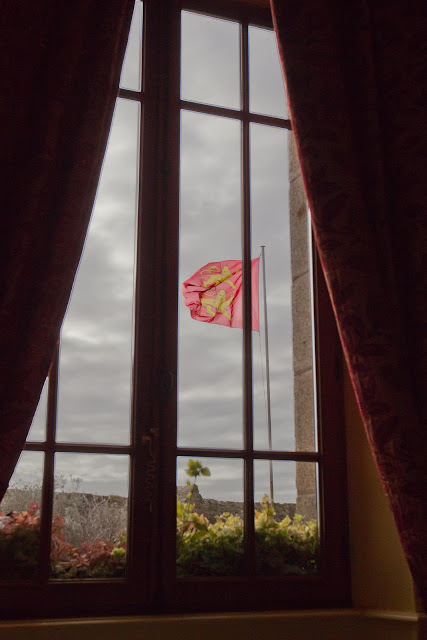 the wind was crazily strong outside
while we were in the comfort of a warm room with a nice fireplace
:))))) 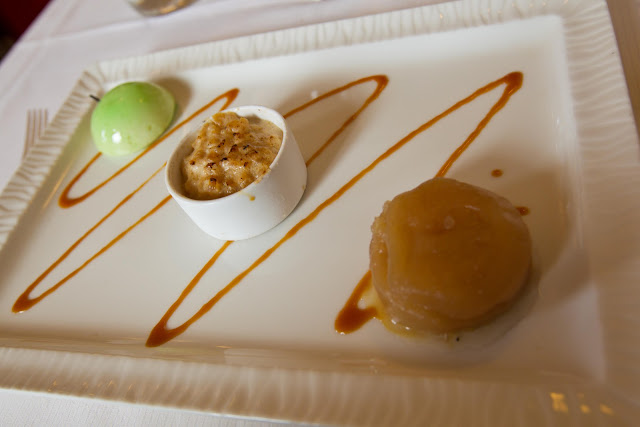 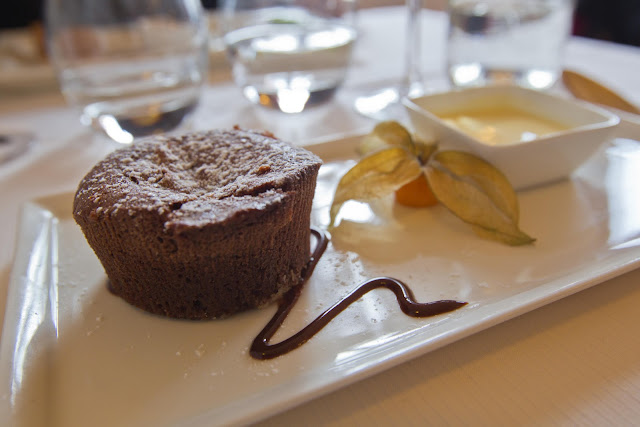 Oh my, those eggs!

Love the texture of the omelette!
The photo truly speaks for itself

I clearly need to make a trip there heheeh

luv the copper pots and pans in the kitchen :)

May: I would highly recommend a day trip to Mount St Michel. :))) so extraordinary and one of its kind

JS: u just have just robbed them off their pots and pans...

I saw the fire is quite strong.. not sure how they control it so well as your omelette looked -to-die-for!! and lobster... sigh... no need to say more...

Food Dreams: Good Question!!!! after cooking it over this strong hot fire....the lady then hung the cast iron pan to the side of the fire place.

so after obtaining the crust on the outside of the omelette, it was put on the side to be cooked further....so the inside would be well cooked too :)))