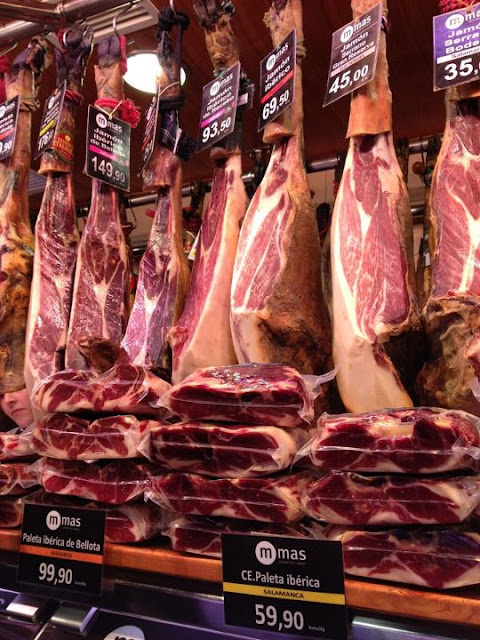 La Boqueria or known as Mercat de Sant Joseph de la Boqueria
phewww wat a long name :))))))
this is one of the top tourist spot in Barcelona along the famous La Rambla strip
built in 1853 and rebuilt over the years we have totally lost count 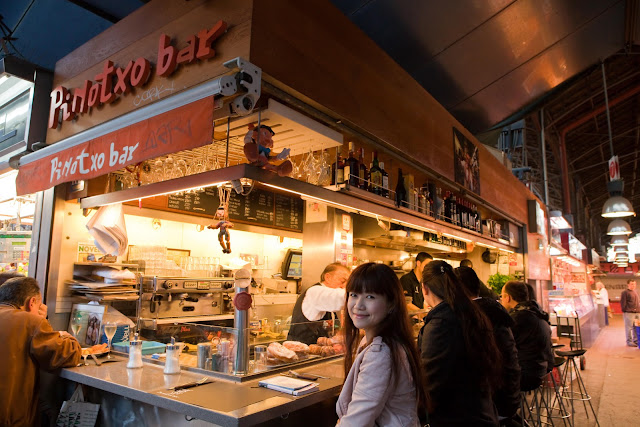 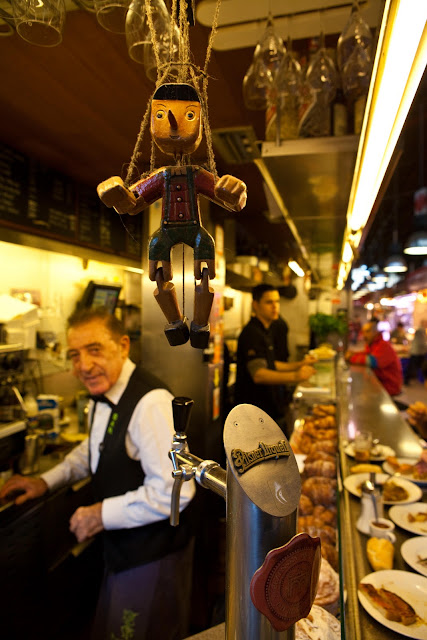 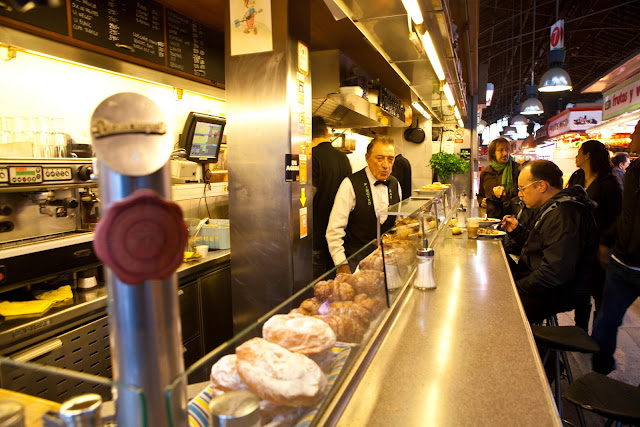 the Tapas bar is located near to the entrance and it's quite easy to locate
if all else fails, check out their layout on the official market's website
the bar looks long but it isn't so usually u'll need to wait for a seat 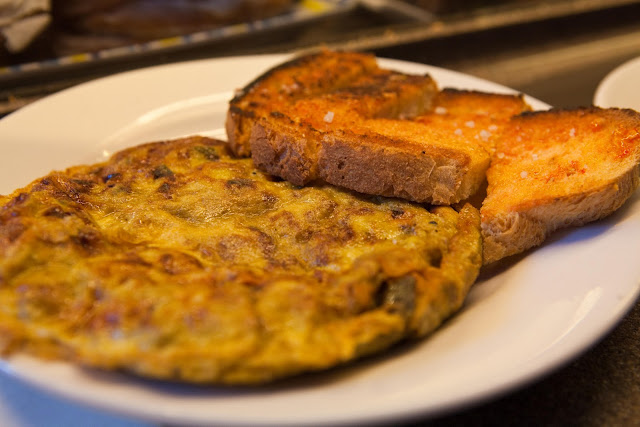 egg omelette and bread scrubbed with garlic and tomatoes with some sea salt on top
we were there for breakfast so bread is a must!!!!
at 9.30am it's a bit too early for tapas though 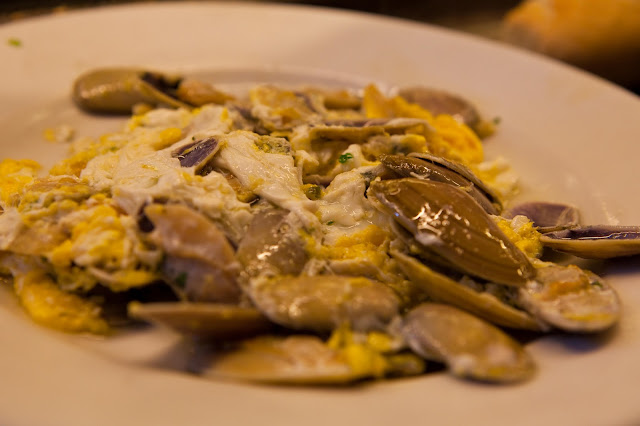 and our dearie friends had tapas anyhow
since they were already serving them, might as well

I find the tapas here a bit too oily though
but if u wanna try some tapas experience in the market, this is the famous bar 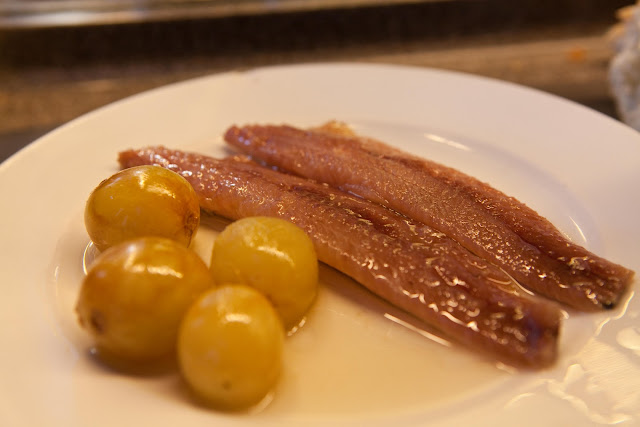 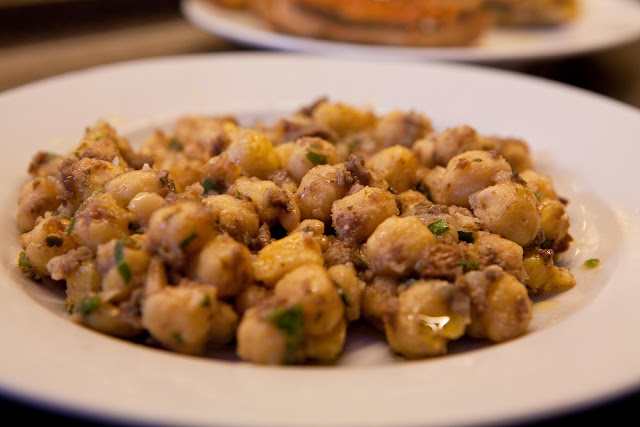 chickpeas!!! cooked with some innards 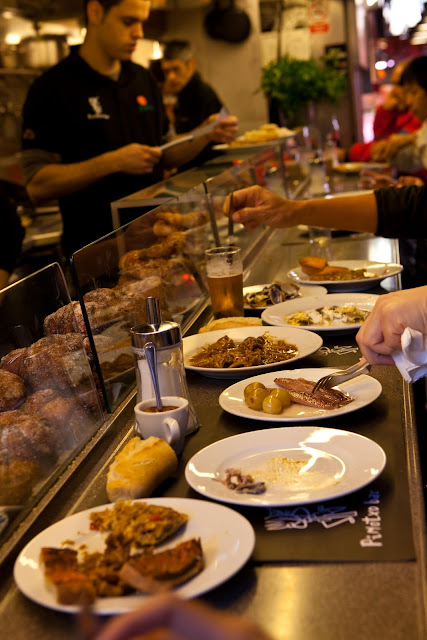 nom nom nom
the pastries here are not too bad either
no pics of it though....cameras loaded with too many pics, can't remember which camera store which pics :P 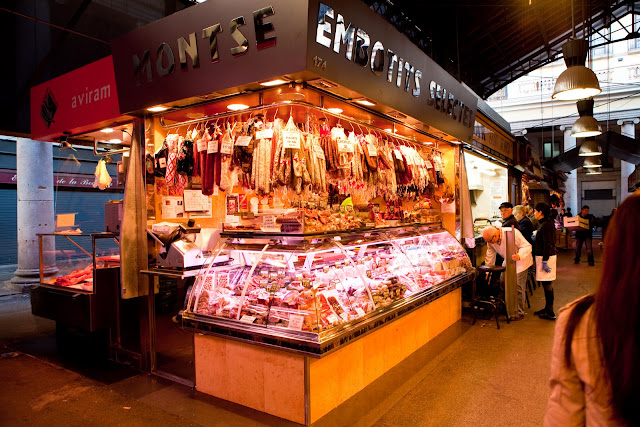 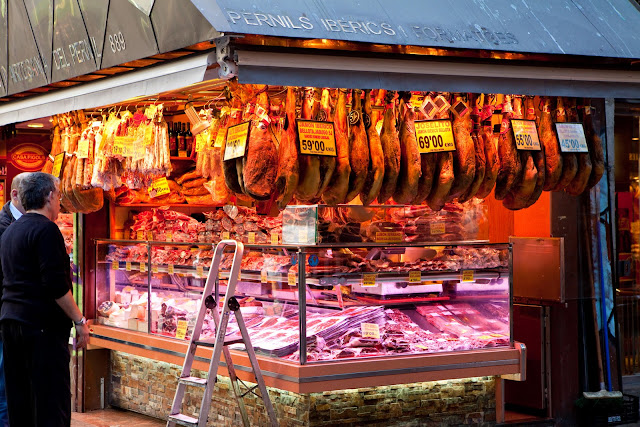 Iberico Ham is a must buy here and we didn't know which store to go to
finally we arrived at one that was very friendly
they even took the time to explain the different cut, from different region of Spain, etc

Basically ppl in Spain are friendlier than those in France :P
so us in our broken Spanish and them in their broken english
guess the universal language is still Numbers when we start punching onto the calculator
hua hua hua~~~~~ 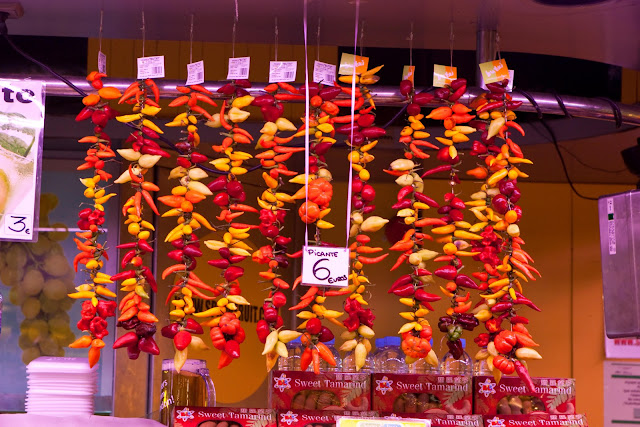 a medley of chillis!!!!
only 6 Euros for the whole string of it *about RM 25.20*
Chillis of all sorts, shapes, colors, spiciness level
we noticed the chillis here are very very very spicy.....than those in Malaysia
it hits u right into ur nose and all the way up into ur brain
just like Horseradish
and it lingers in ur mouth for quite a bit 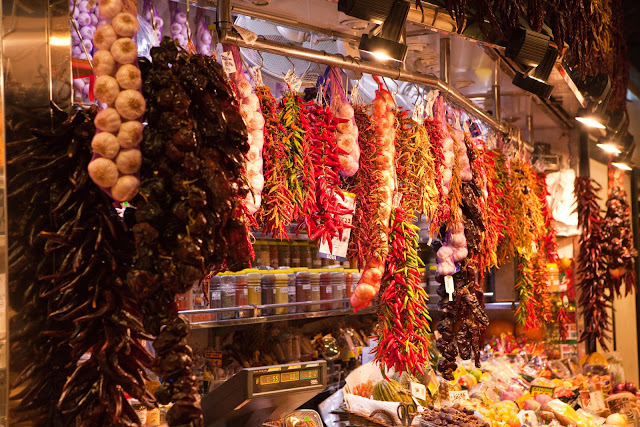 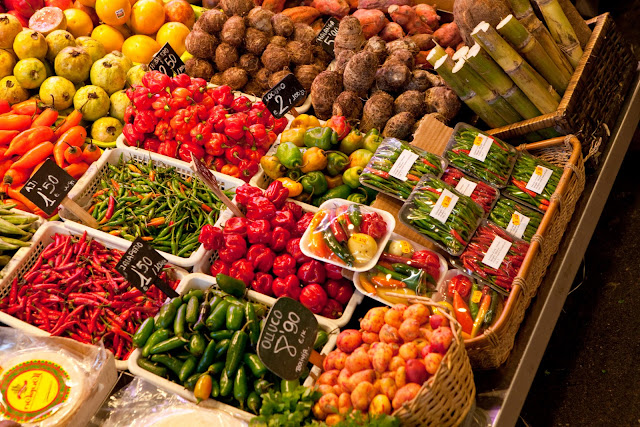 as the saying goes, do wat the Romans do when u are in Rome
so we were speaking with a lot of hand movements and intonations
ohhhh I love SPAIN!!!!!! 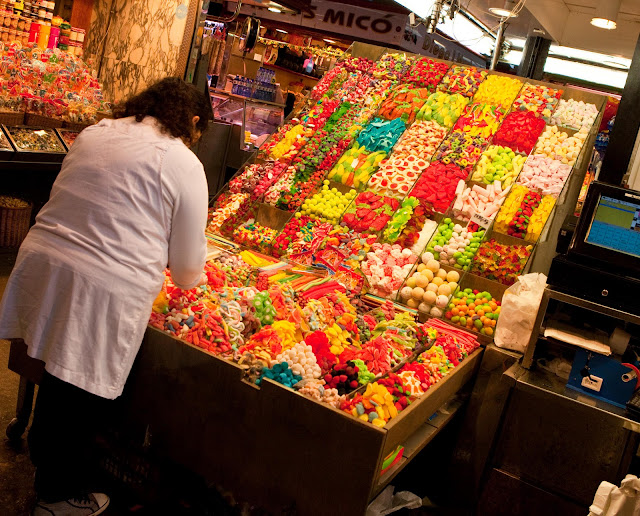 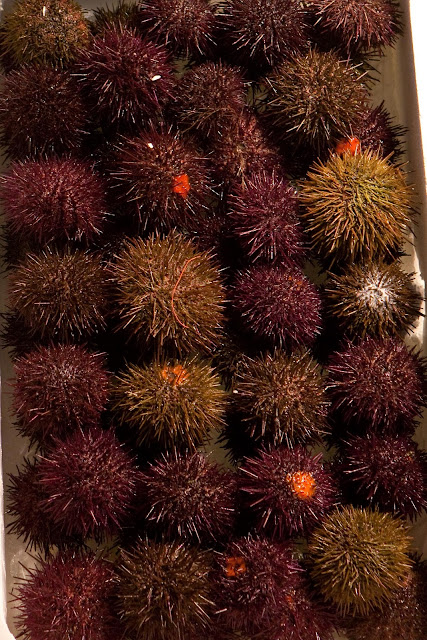 hehehehehehehehe my favourite!!!
look at the orangie goodness oozing outta its shell
wahhh so yummy!!!
and if u r still wondering...it's SEA URCHINS!!! 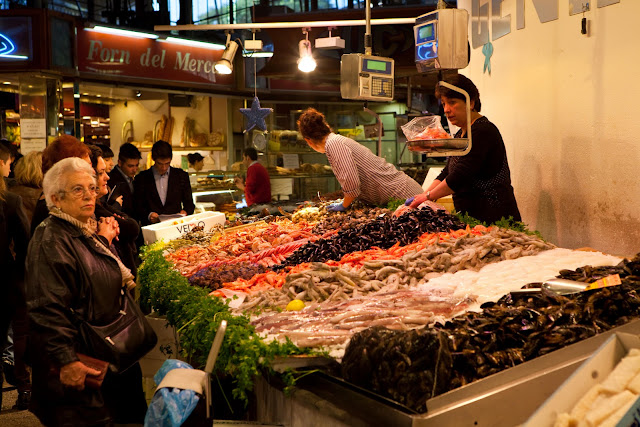 and we've walked over to the Fish Market side
everything is housed under the same roof with sections
from cooked food *tapas* to vegetables, fruits, Pork, Seafood, Meat and spices 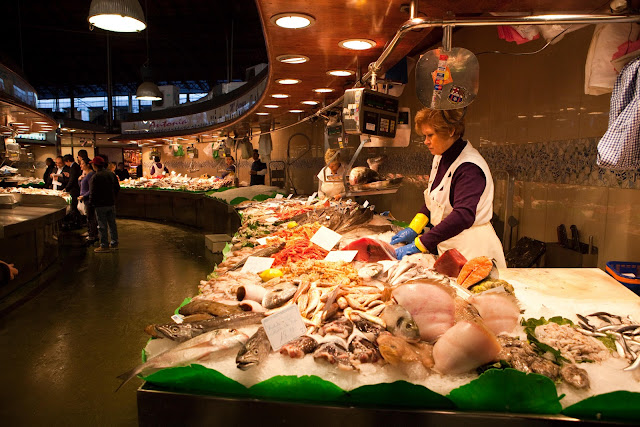 the fish section is so clean and there's no smell at all
we saw so many different types of fishes and sea produce
and probably only recognised 40% only
the rest looked so foreign!!! and yet we were so curious on its taste and texture 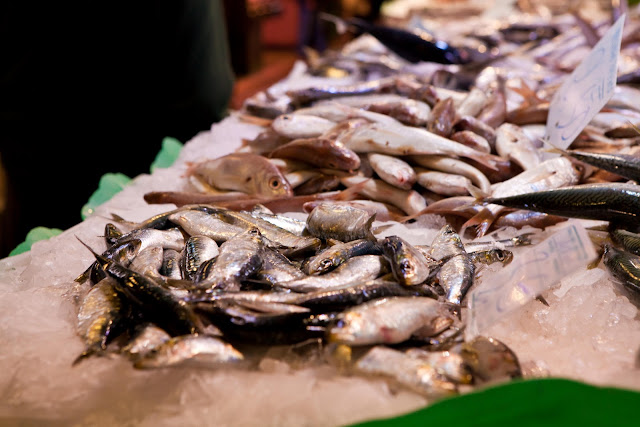 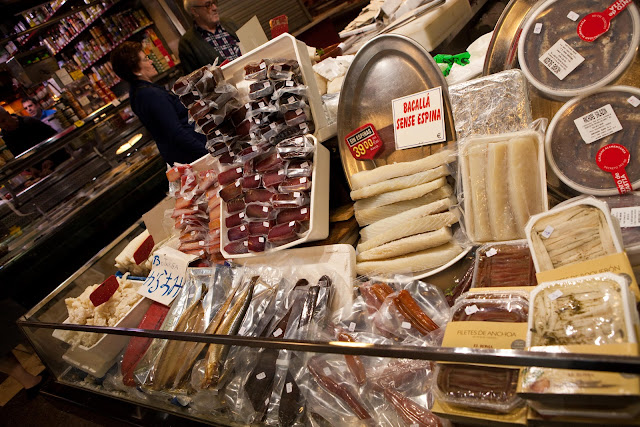 well the same applies here....I went crazy on bags and he went mad spending $$$ on Botargo
Botargo = cured fish roe
it's such a delicacy

also known as poor man's caviar
if it is a poor man's food how come it is still so expensive?????? 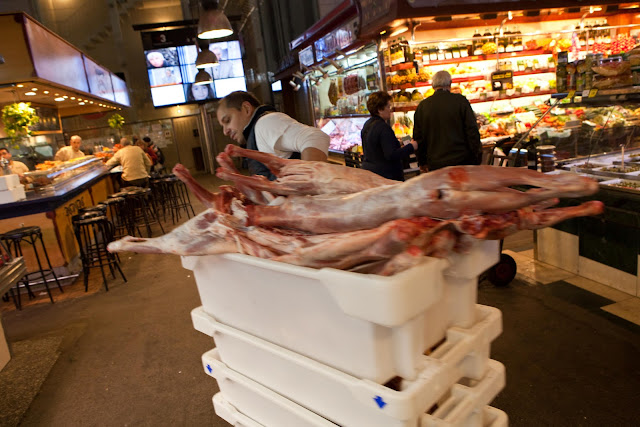 as we were immersed in all the craziness in the market
a man swing by with loads of errrr lamb!!!
and we followed him to the Meat section 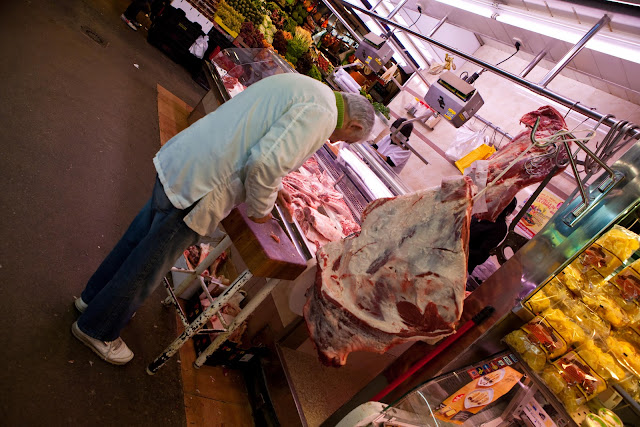 and u can get all PARTS of an animal
when I mentioned ALL PARTS...it's really from head to tail
from Brains to Testicles
-_-"
full specs!!! 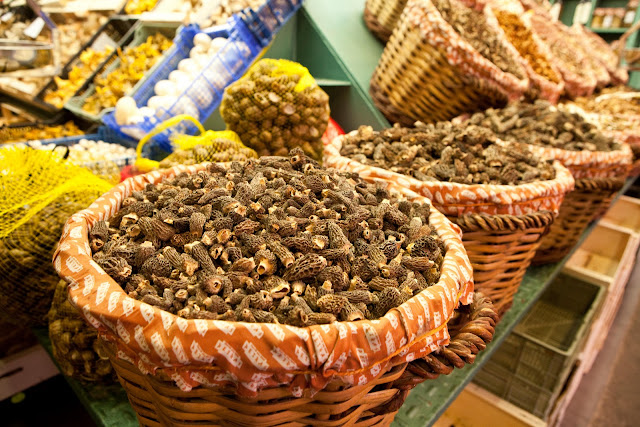 ooooOoooo smelled so good and I turned my Monkey head
MUSHROOMS!!!!
all sorts of it!!!!! 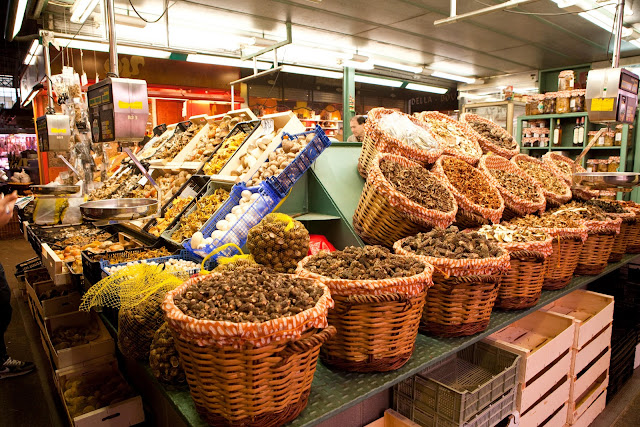 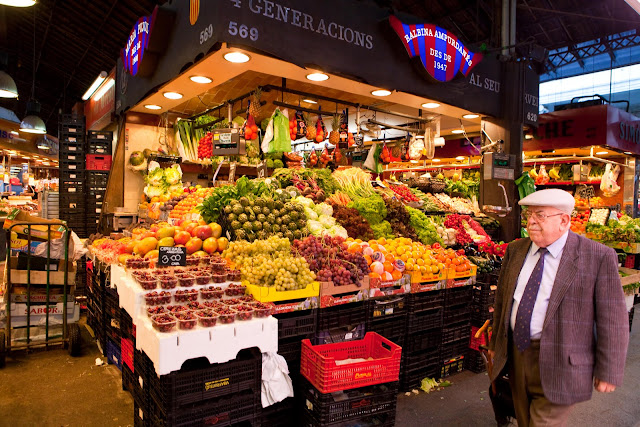 just like how French regards ppl fr Paris = Parisien
"they are not french but Parisien....and shrugged off his shoulder" said a frenchman
yep French are very particular if u compare them against Parisien coz the later is known to be living in a world of their own not to mention snobs :P 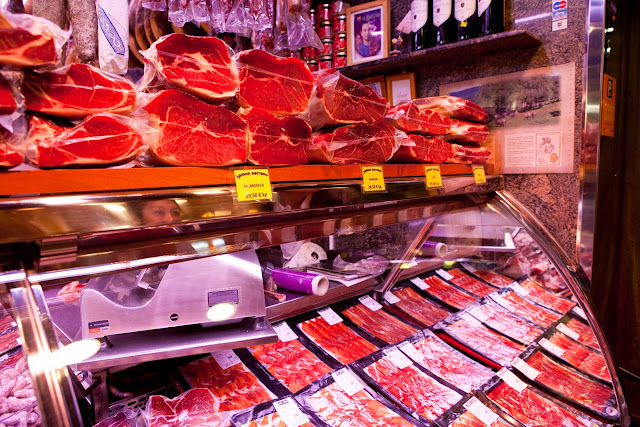 despite the vastness and size of the market, we alwiz stick back to Iberico stalls
huaaaaa hahahahahahaahahha

yep if u were wondering, we bought quite a few blocks home
and got our priorities right
all my beautiful handbags were stuffed and cramped into the luggage bags
while these Iberico Bellota were cuddled and hand carried all the way home
alongside the Macaroons
sigh...yes our tummy are more important

Welcome back ! Looking forward for your posts of your recent trips :))

Gosh... I am speechless at the magnificent boqueria!! Colors, images, food... I would certainly do the same by preciously carrying back all that goodies for my tummy too!! ;0)

lotsa pics to post....and I'm leaving again next week for work related travel...so much to post too lil time...