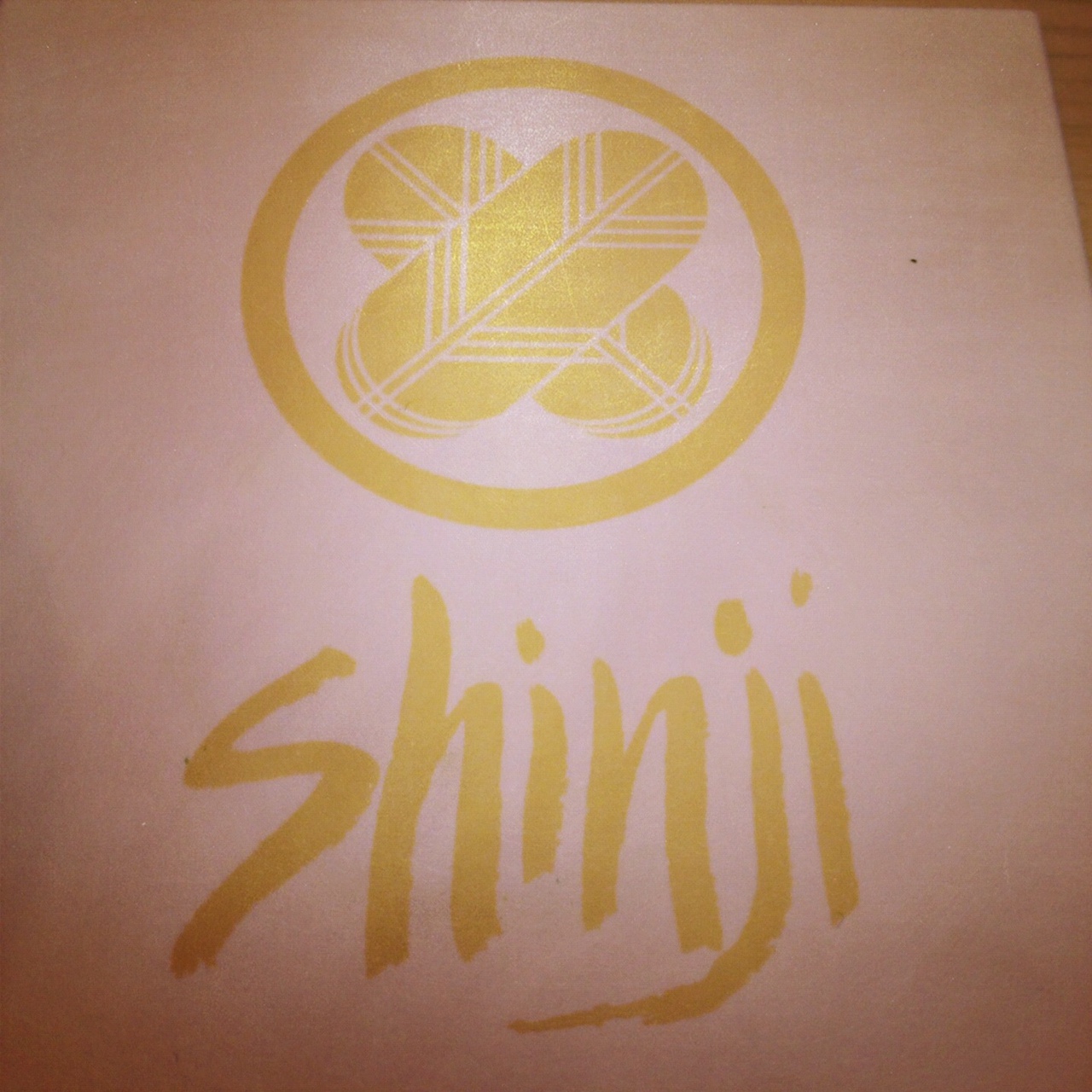 It's such a big treat to come here....I was almost kneeling on the floor when we arrived at its door..
Ohhhh Shinji....my favourite sushi place~~~~~~
Monkey bowed low upon entering the lil haven :)) 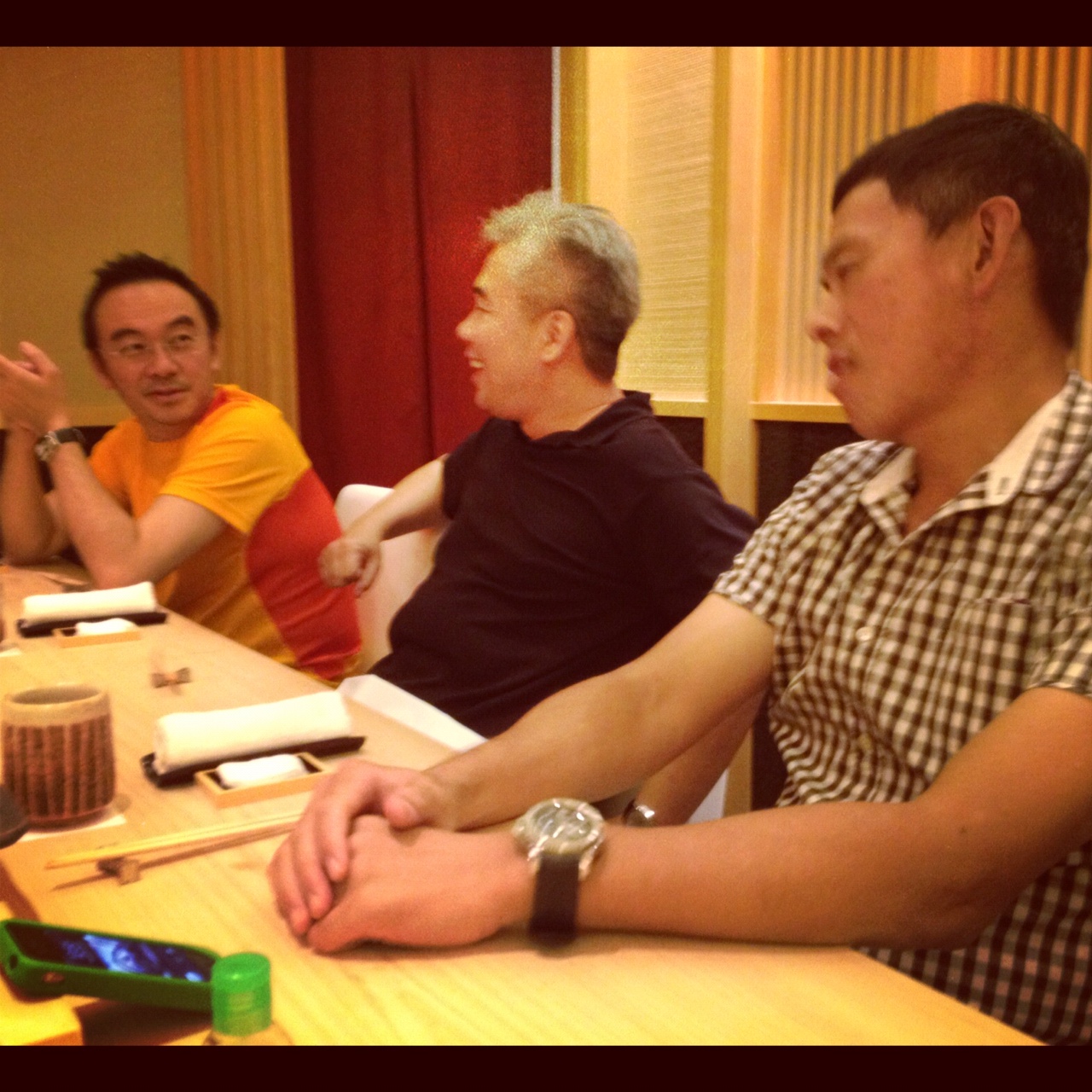 When they realised I'm snapping their pic.....all stopped and pretended to be serious again
dead serious. 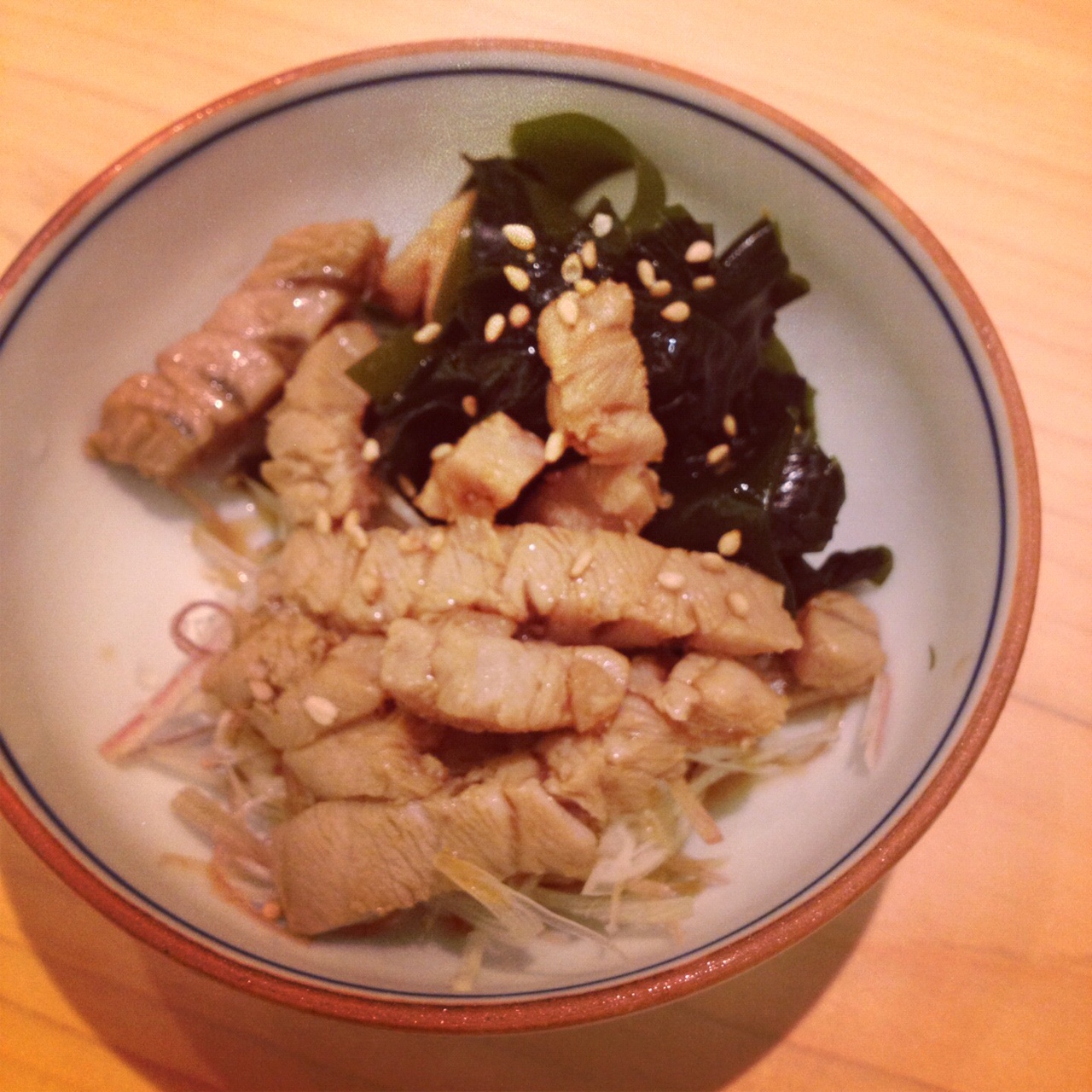 Since I got a death threat look I better concentrate on my food and ate with my head bowed even lower...hahahahahha.
appetizer of Tuna and thinly sliced japanese ginger flower
u thought that's pork huh? nope, it's a fish..so fat that it almost resembled pork 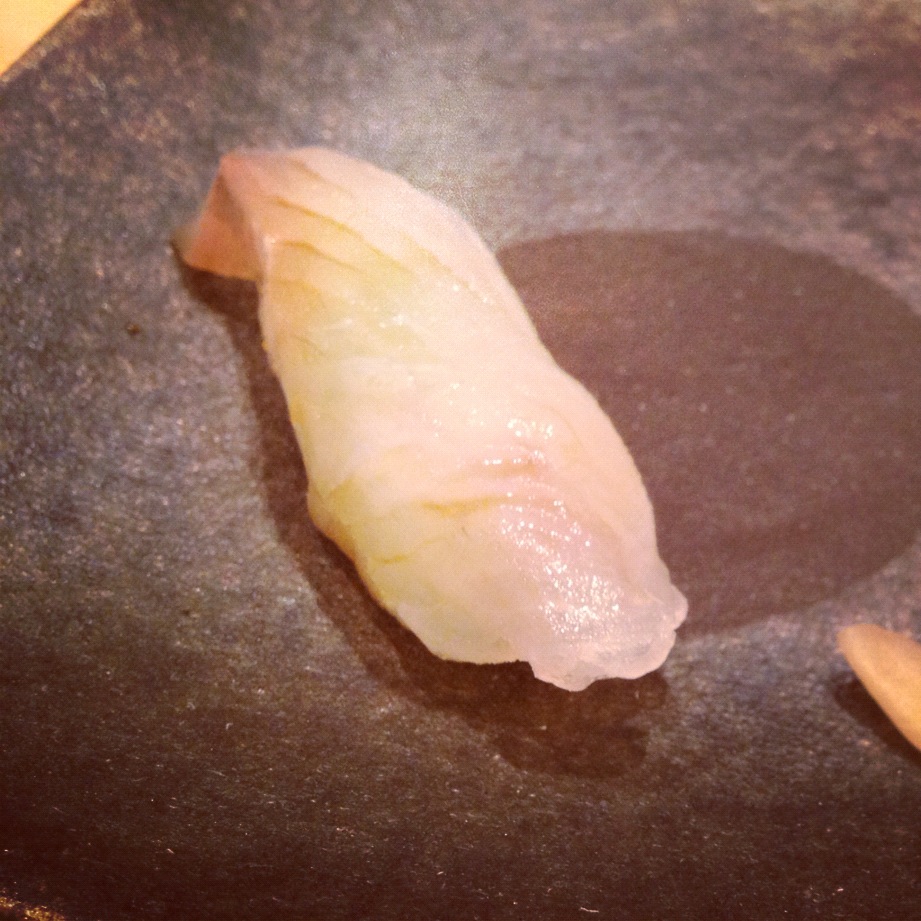 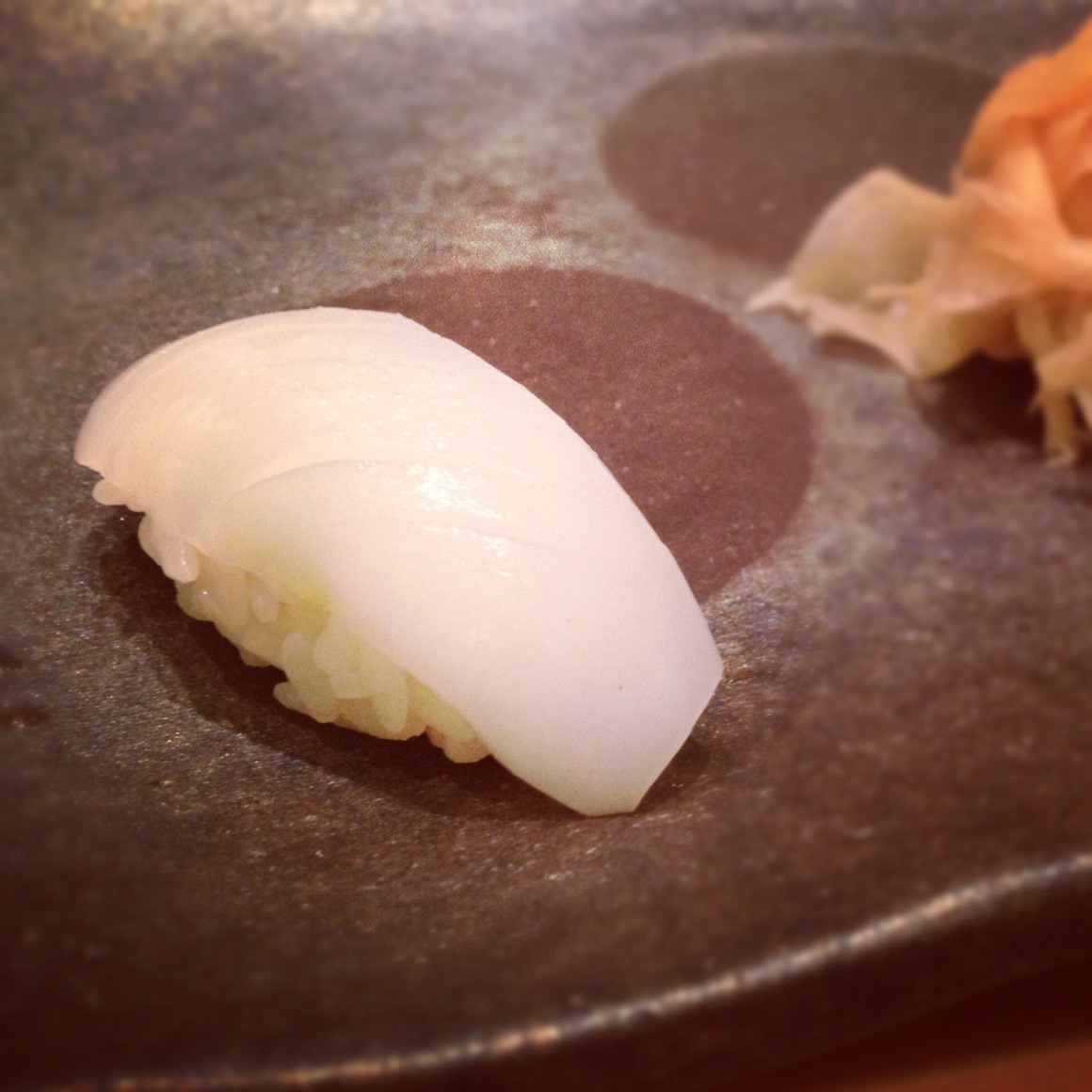 a neat piece of squid with sea salt and japanese lime
very good texture and fat...it must be a deep sea squid 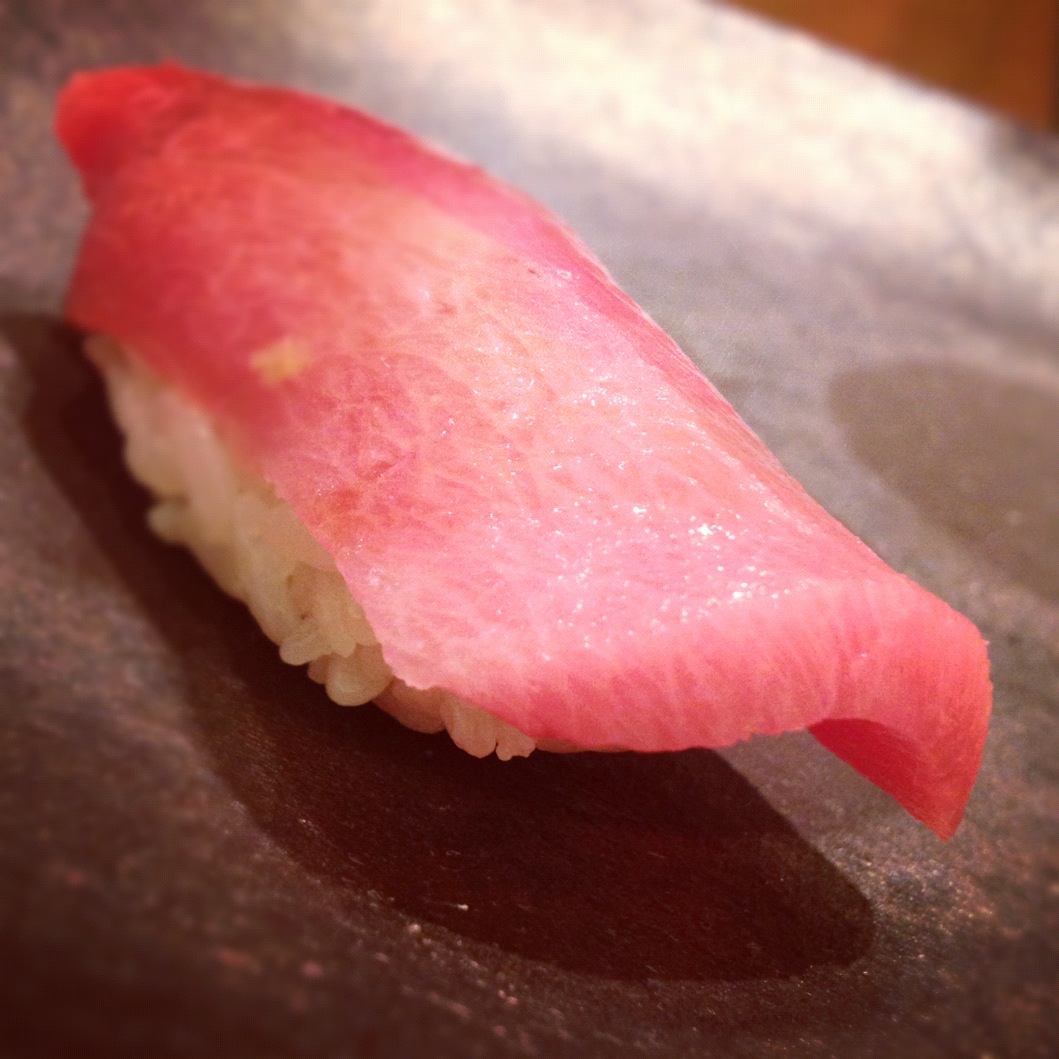 Chi toro....
the marbling of fats just melts in ur mouth effortlessly 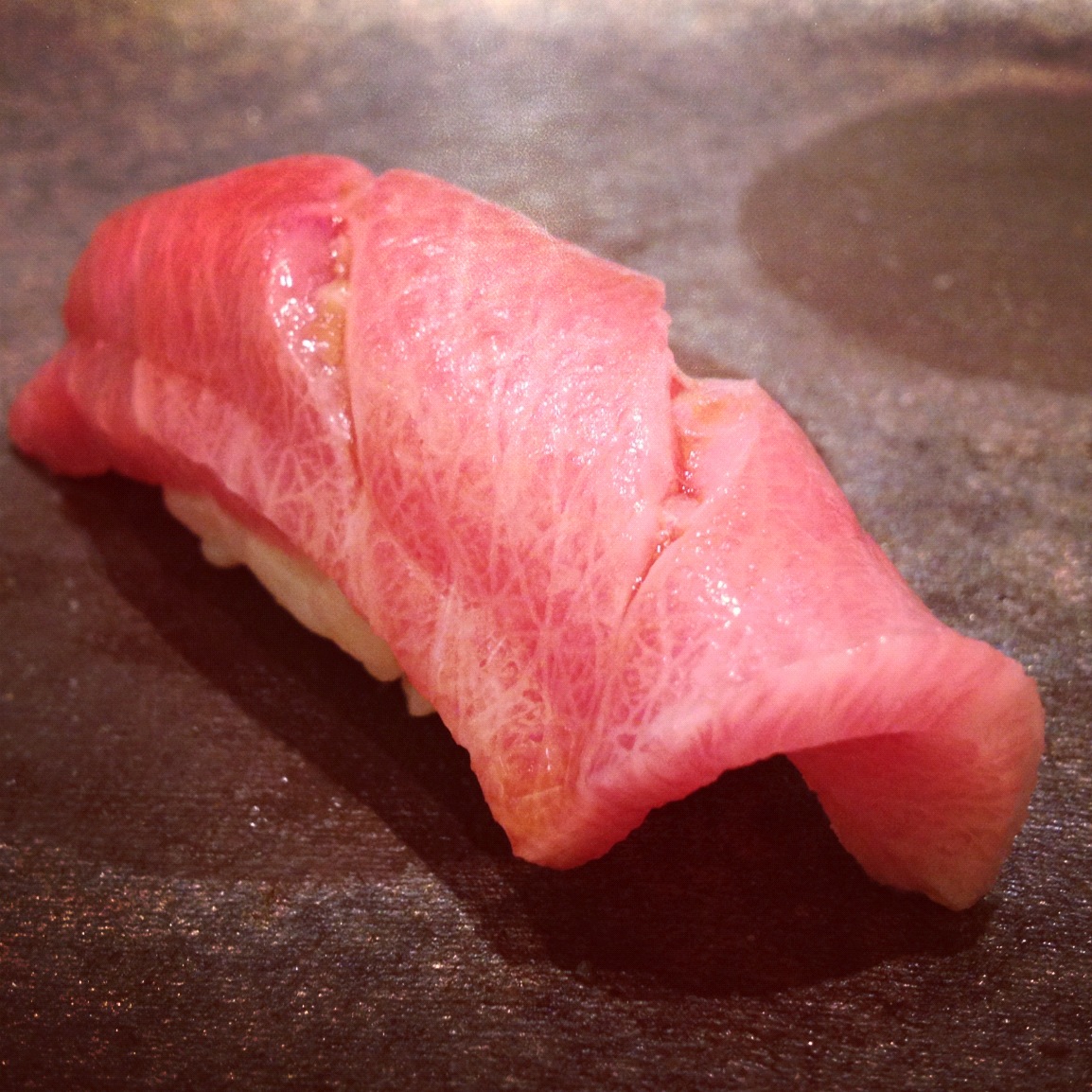 here at Shinji u eat sushi the japanese way, with your hands and no sauce
it's almost a sin if u dip your prized highly crafted piece of fish and rice into the sauce.
hahahahaha 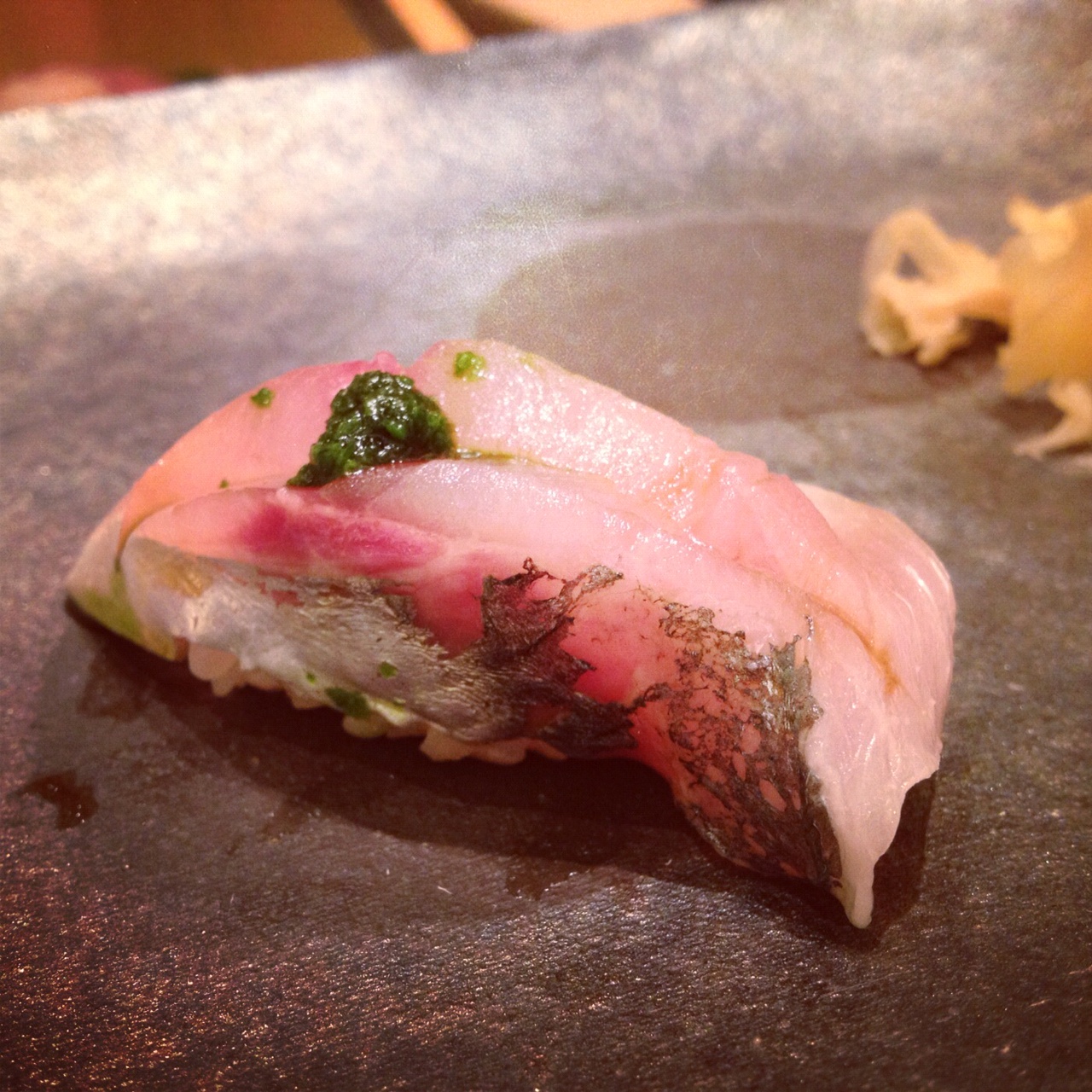 Then we have the Achi
aaaAAaaaaa see I told ya, Shinji is such a treat
and we were served by Master Chef Oshino 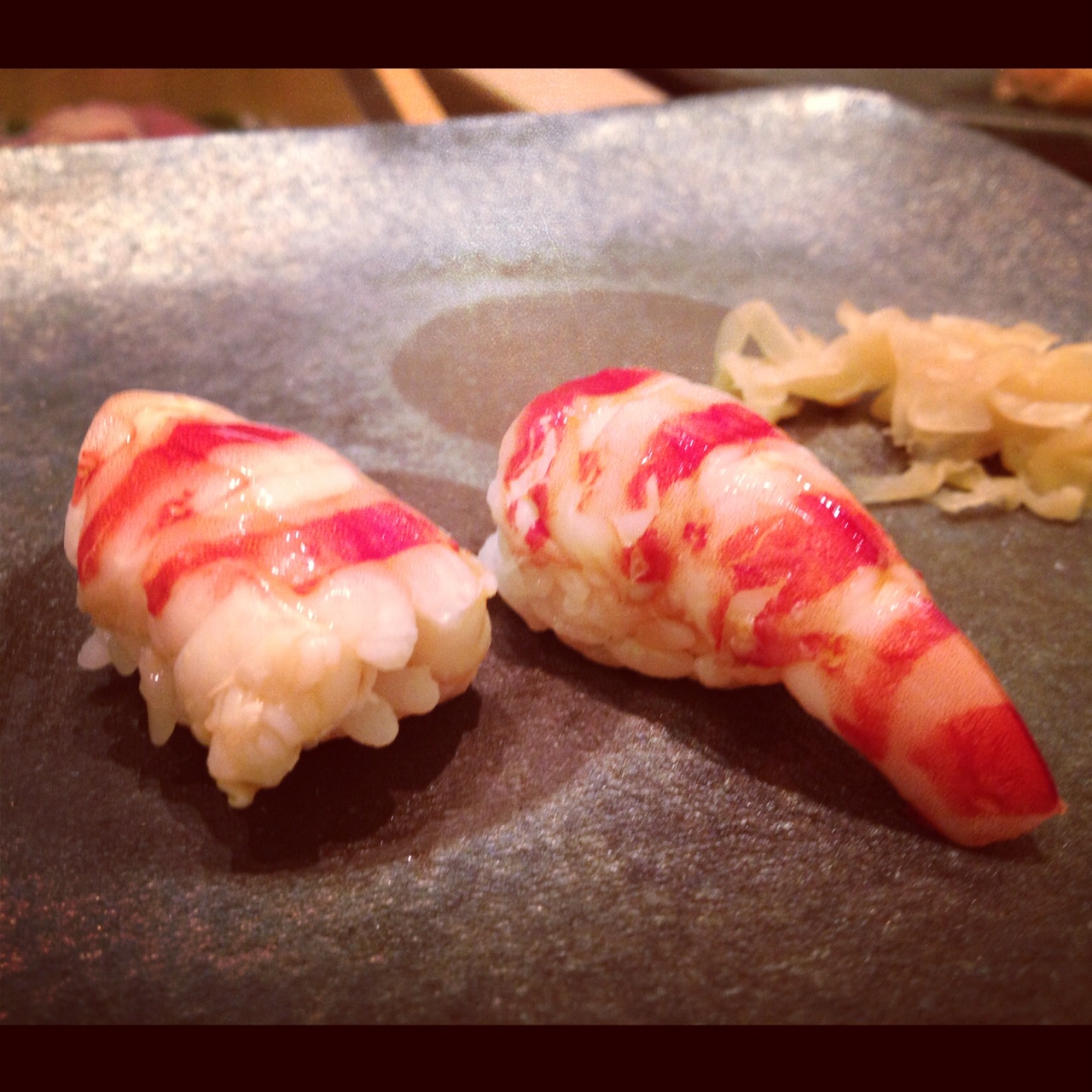 A special prawns only available during the winter months
it looked so so red!!!
extremely fat as well!!! 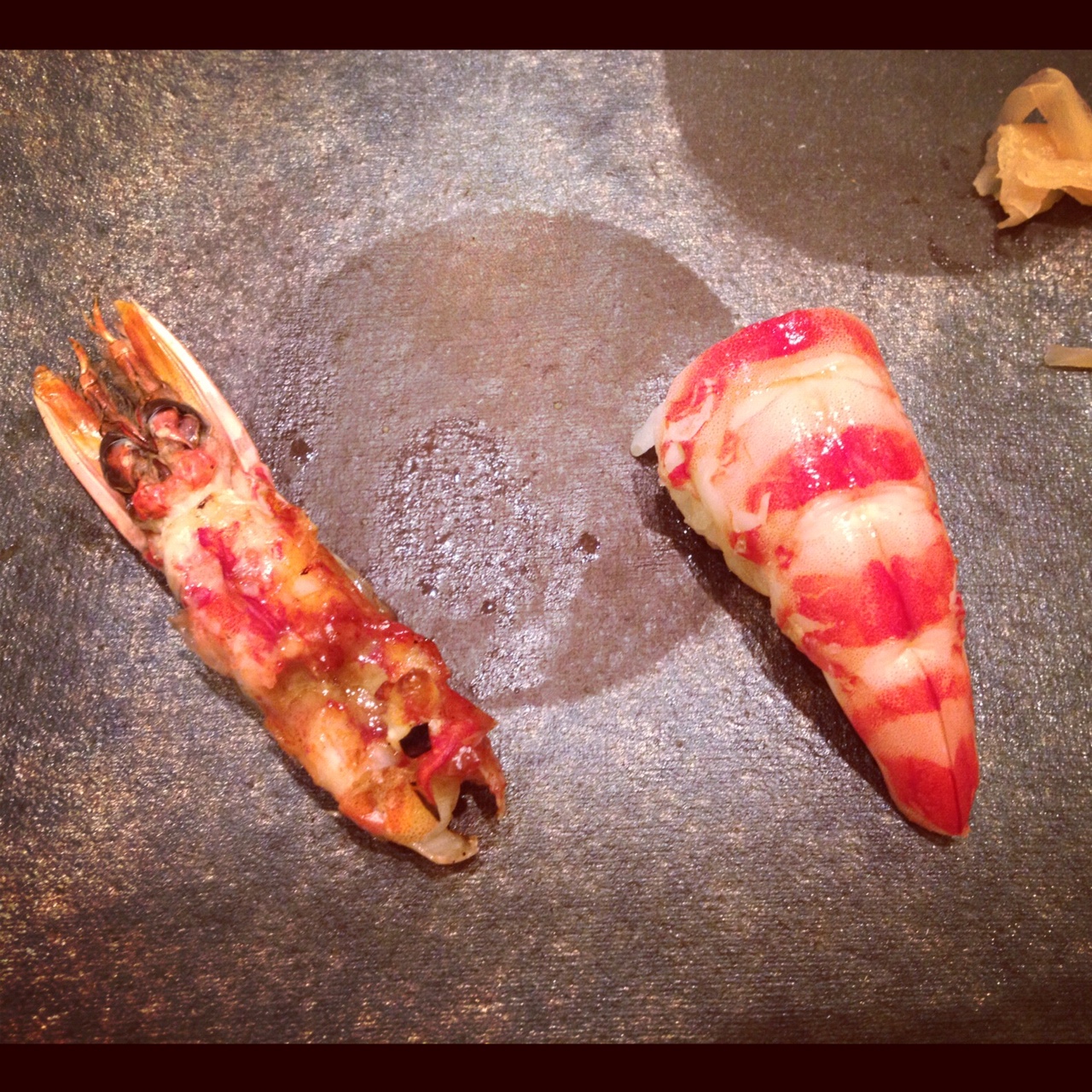 As I was bz chomping my prawns, Chef dropped a piece of crispy deep fried prawn head on my plate.
I was like yippppeee!!!!! 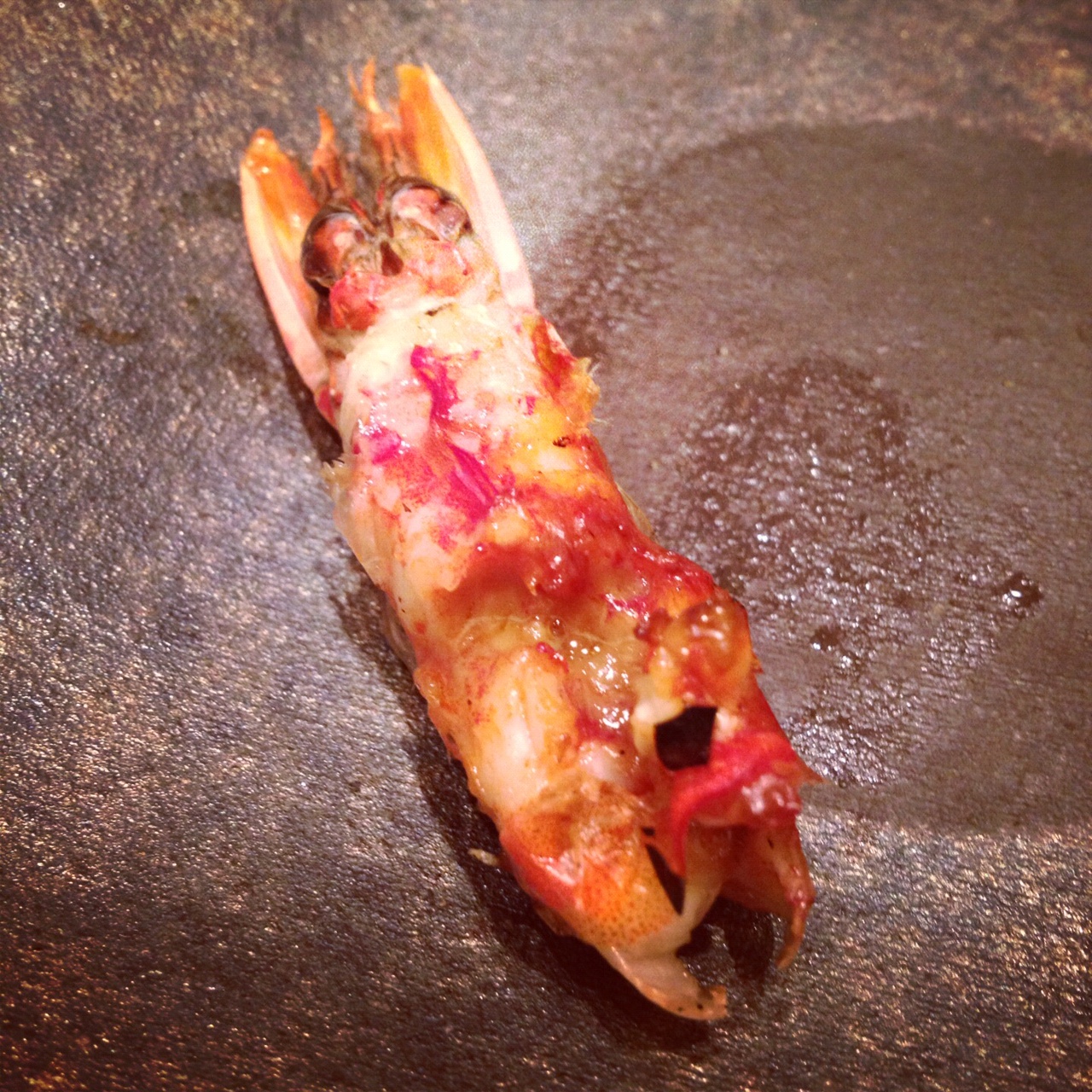 Look at the roe!!! I dunno how chef fried it to such crispiness but maintain the moist creamie roe on its head...

Monkey: "Anyone wanna donate their prawn head to me?"
All the men pretended not to hear Monkey
Monkey: "hey hey hey high cholesterol....all of u better take care and donate your crispy yummy prawn heads to me."
The Men proceeded to quickly pop their prawn heads into their mouth in lightning speed
-_-" 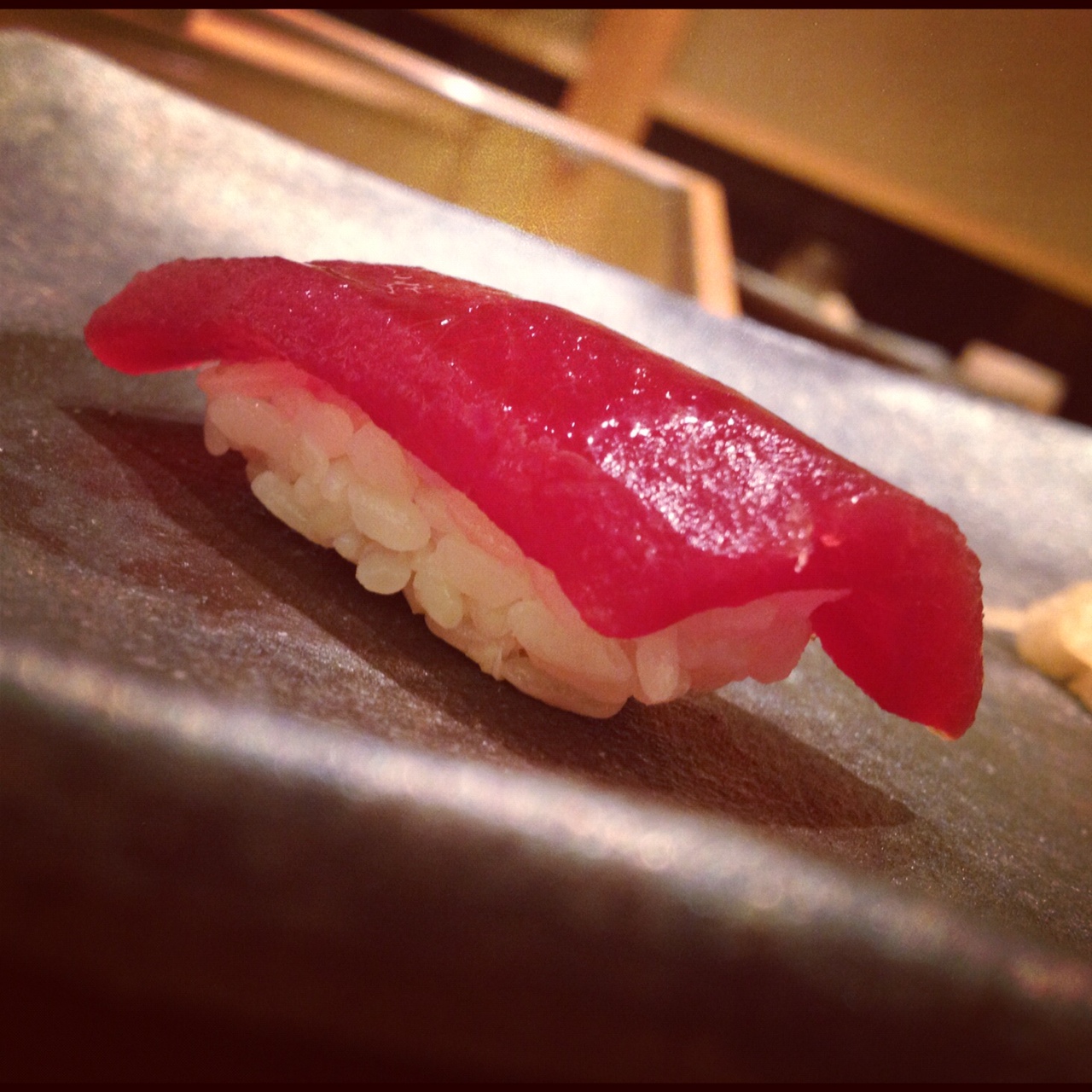 Maguro
such deep ruby red
but do pay attention to its grain :)))
the beauty of Shinji are its high quality produce from Tsukiji market flown in daily,
its beautiful fat grains which u can feel individually the moment it lands on ur tongue
and the skillful japanese native master chefs executing all these 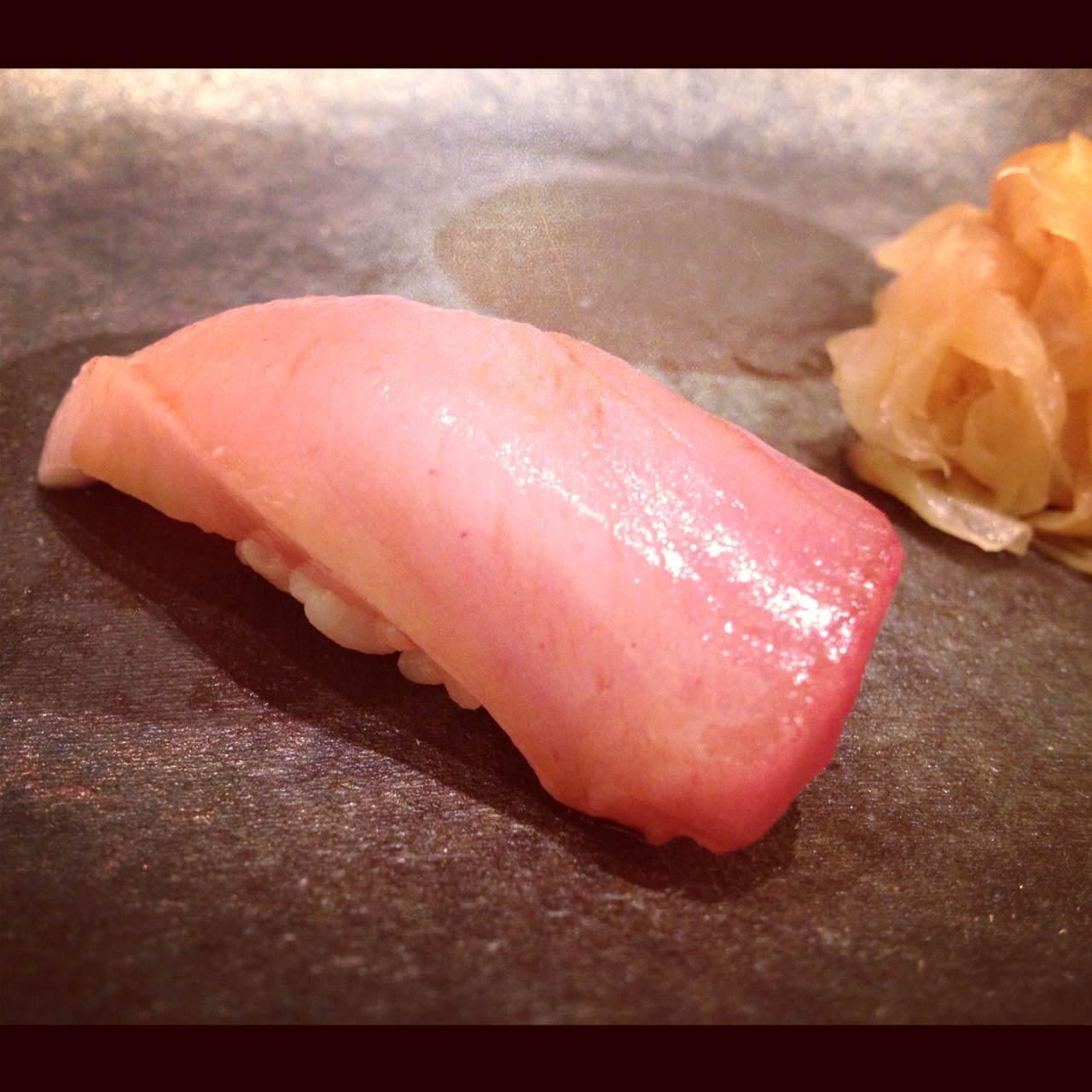 Baby Tuna
the meat was so so so delicate and sweet 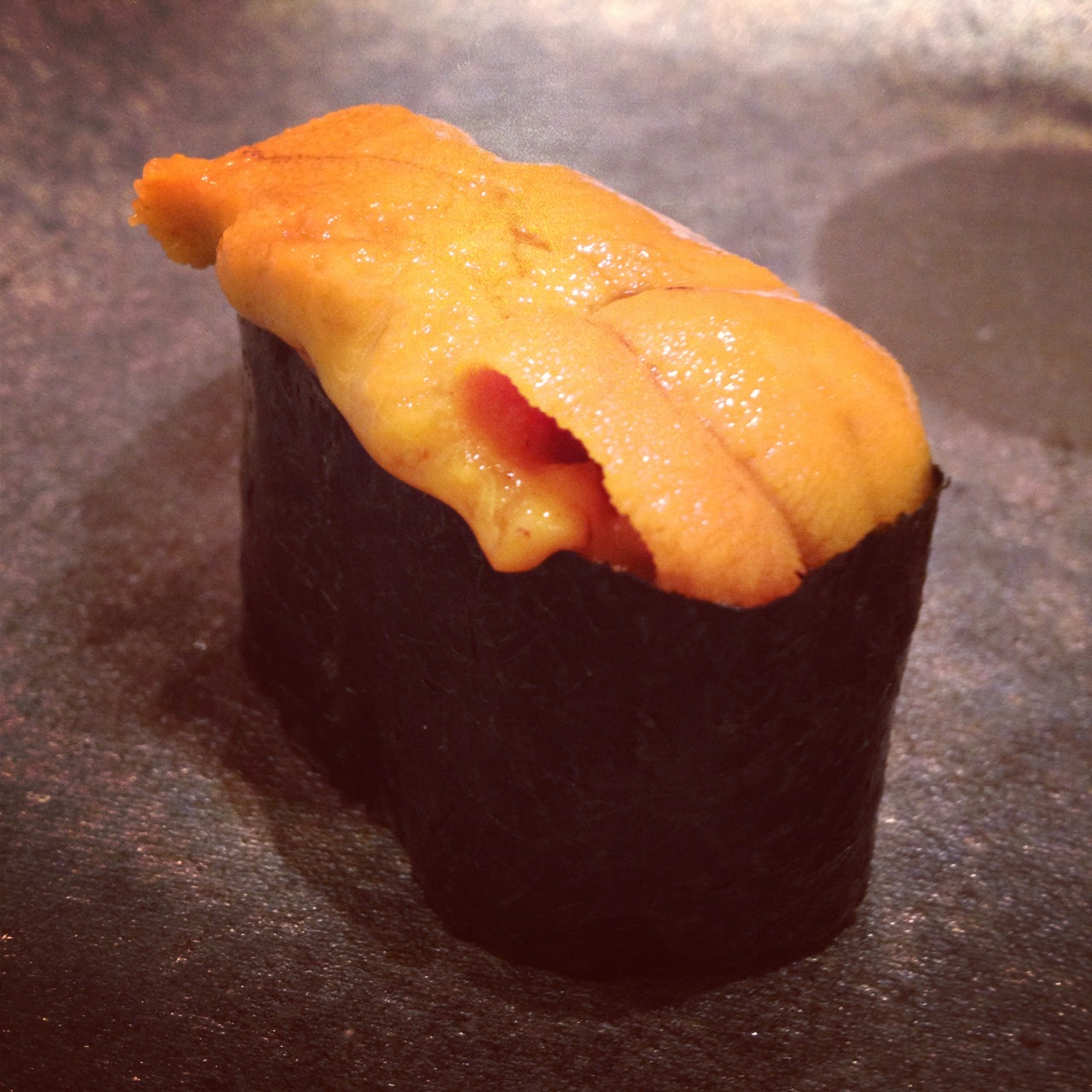 My all time favourite Ooni - sea urchin
there's a hell lot of it, as we were seated by its counter...I saw Chef dipped into his tub of high quality ooni with his spatula, lifted it up the tub, before gently settling it down on the rice.
Such skillful display of sushi making
U know it's of high quality bcoz of its firmness and sweetness
aaaaahhhhh heaven 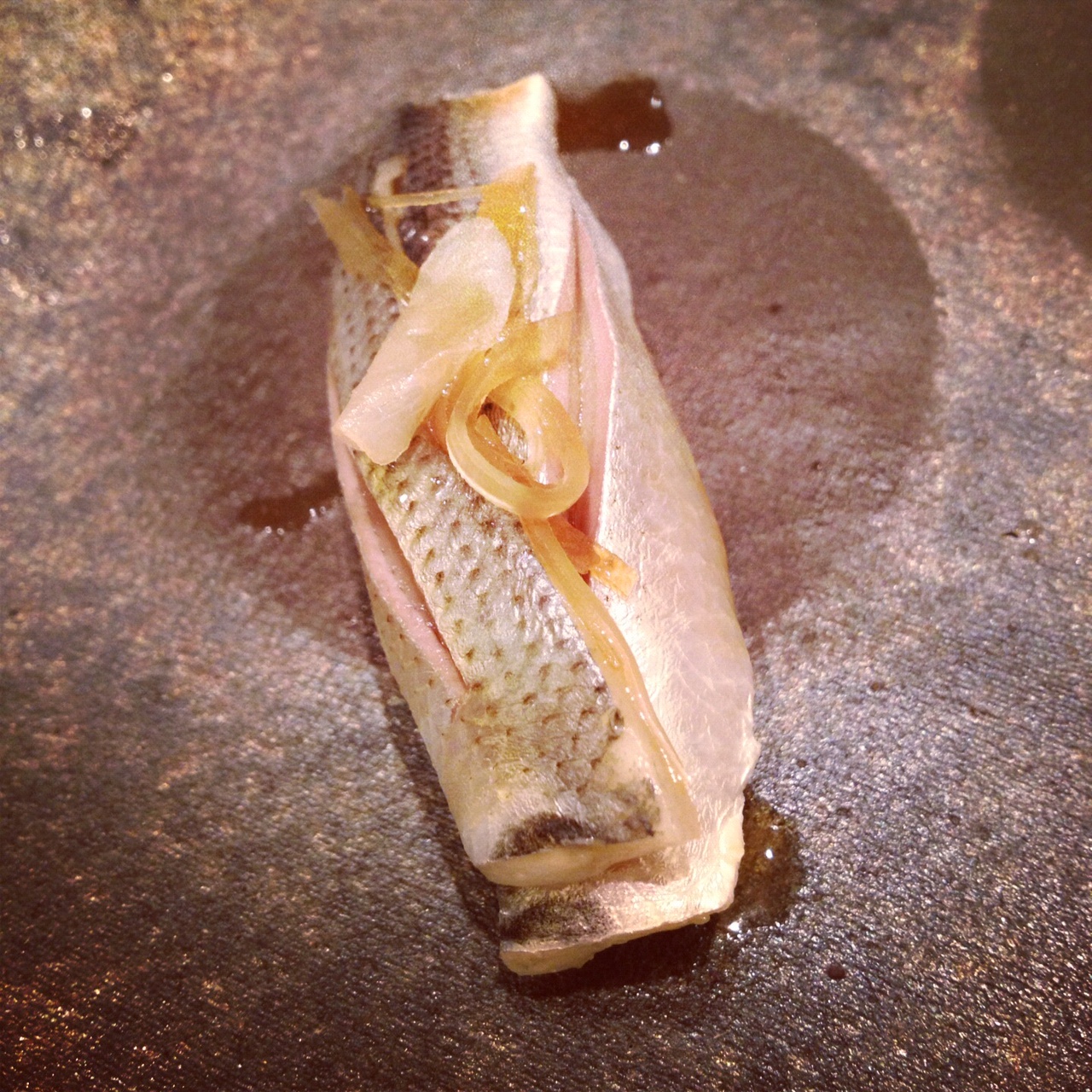 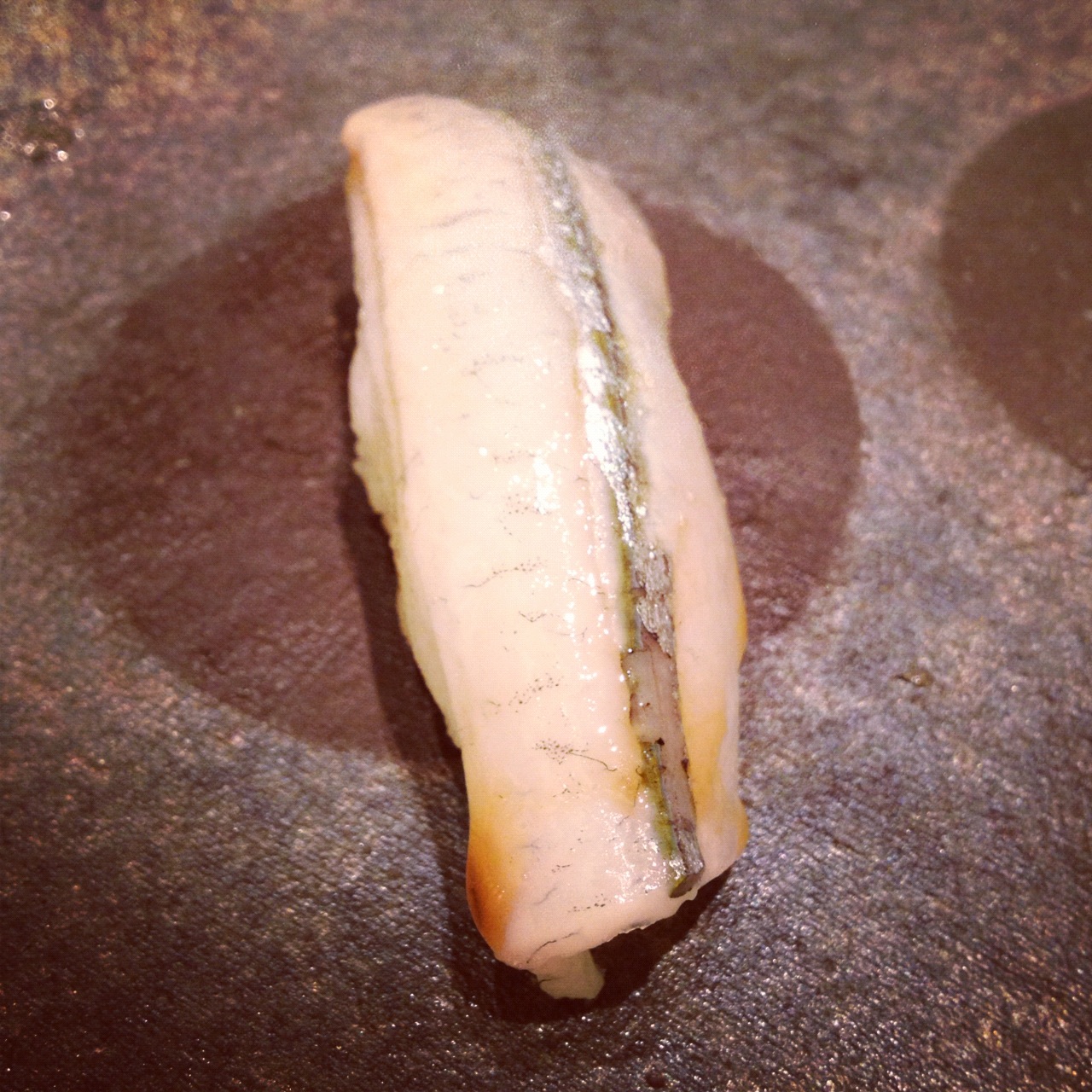 Sayuri garfish
nope it's not garfield, I've seen live ones while snorkeling in Sabah. It's a very thin and long fish. 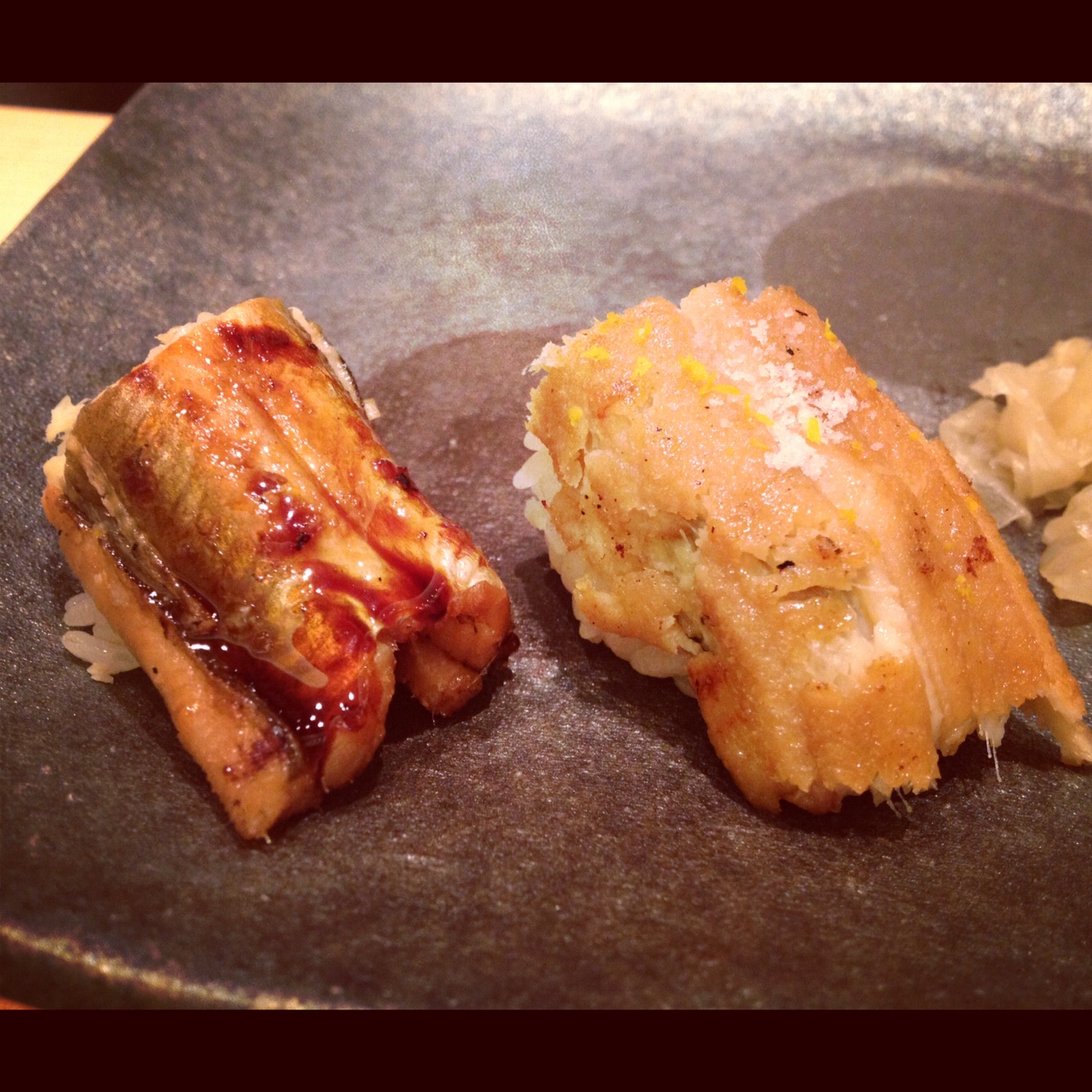 Sea eel prepared 2 ways, grilled with sauce and the other with sea salt and zest of yuzu lime
Sea eel is much sweeter minus that "smell" and its meat are lighter in color as compared to farmed eels. 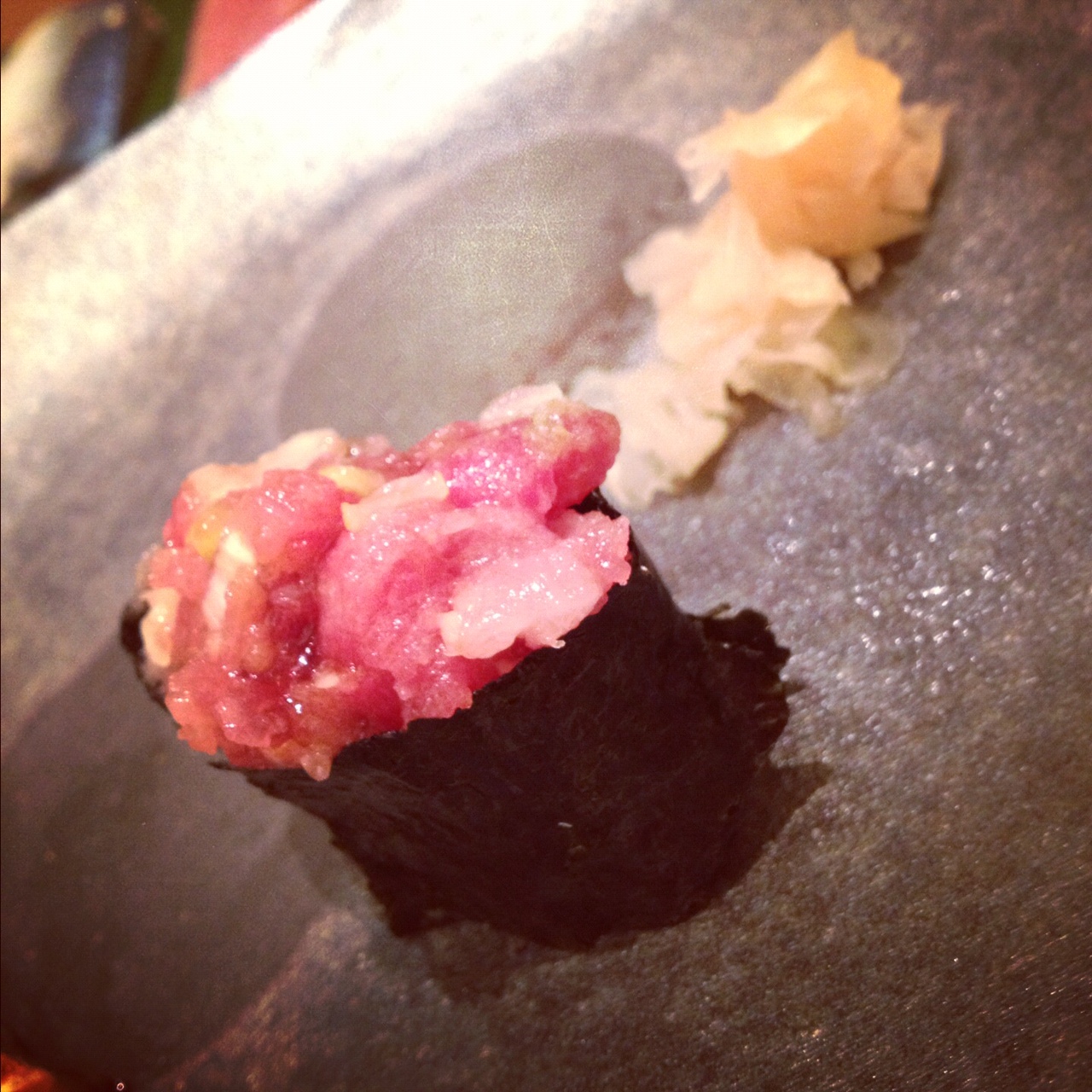 Chopped toro sushi with negi - leeks
my favourite at any sushi establishment
if u were wondering, Shinji is a master of sushi hence they serve nothing but sushi.
Really a sushi heaven 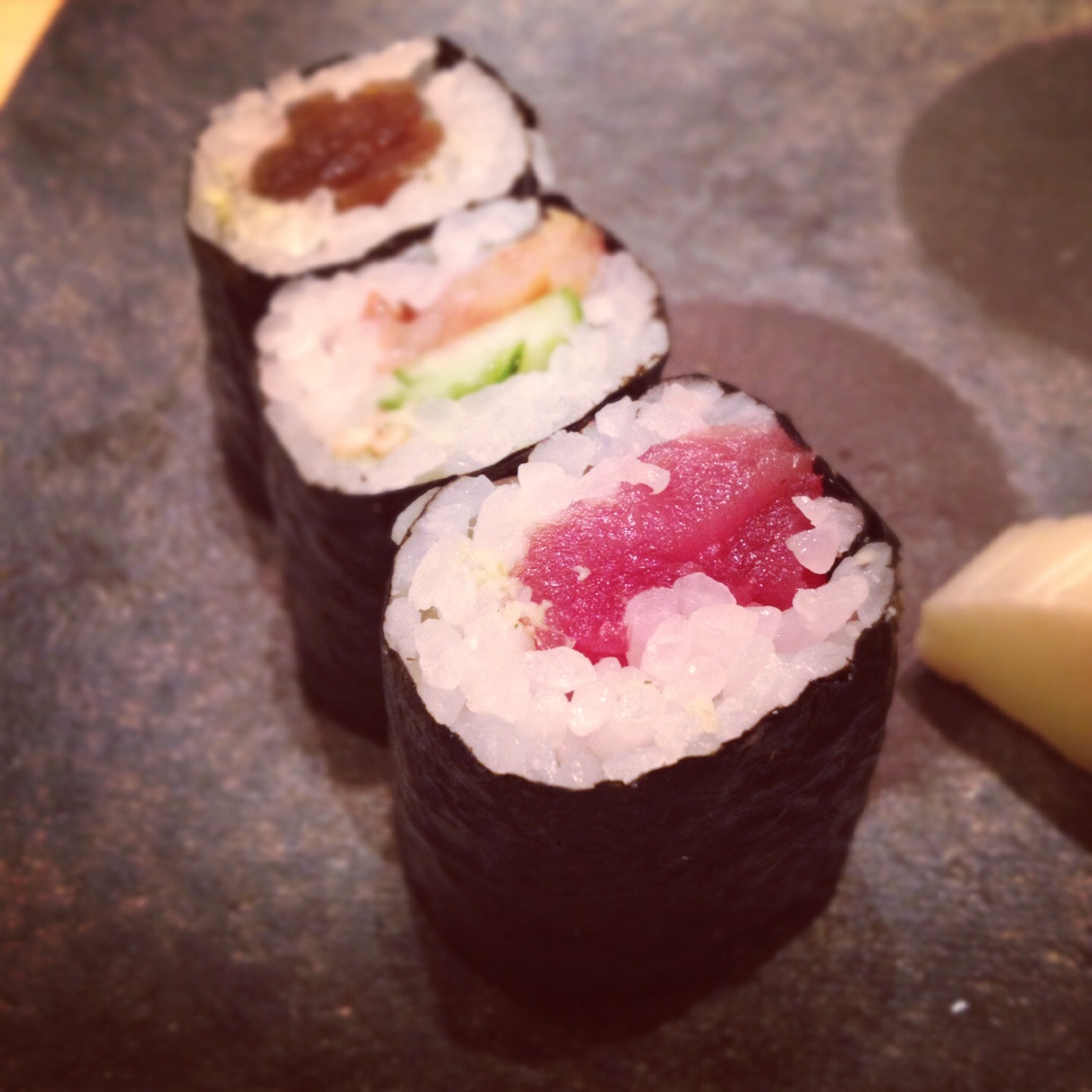 more tiny bites of sushi - squash, akargai and tuna
akargai is a japanese clam, almost similar to our "see ham" but it's huge and less bloody!!! 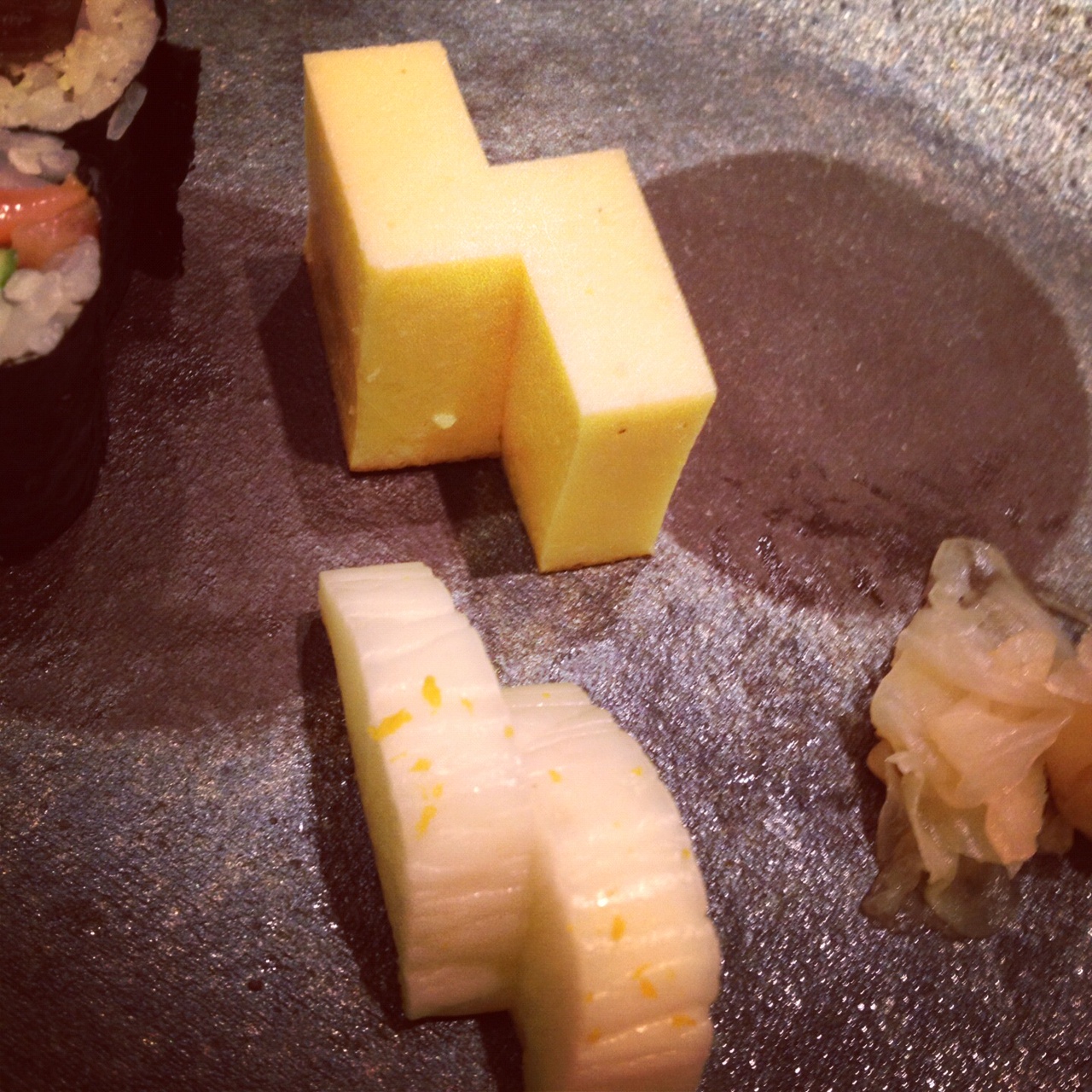 superb Egg Tamago
it's different from the usual ones, coz it's soft and silky smooth 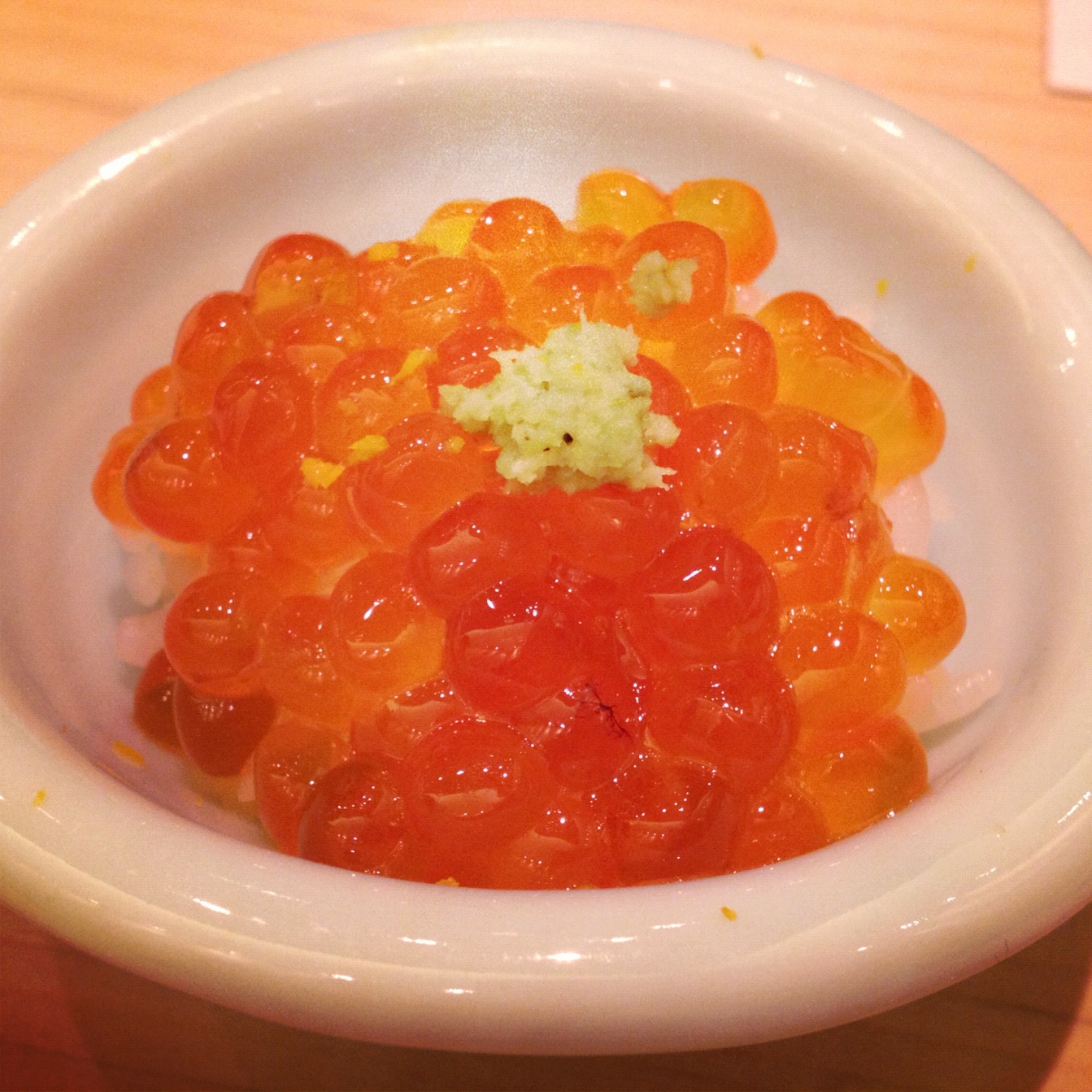 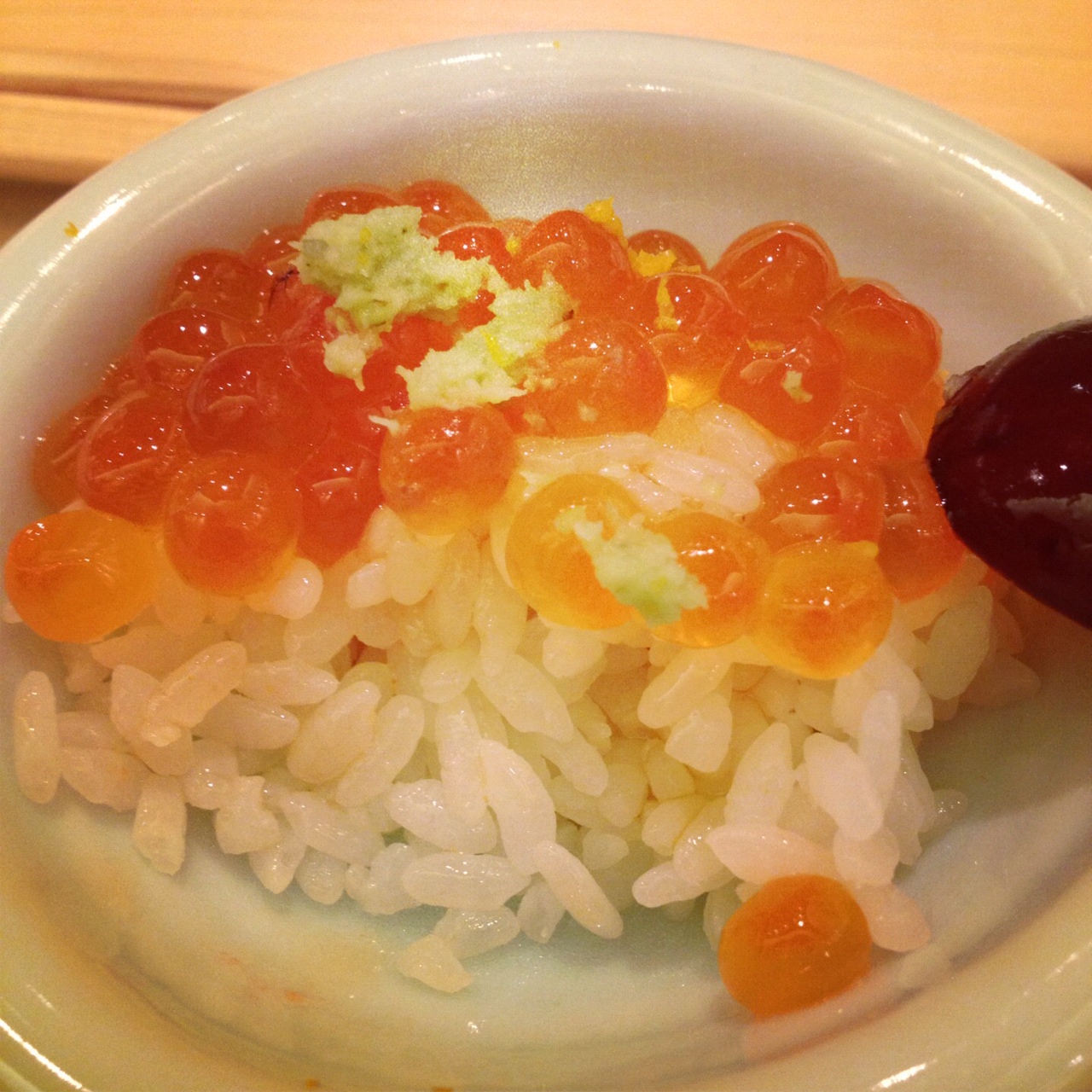 ohhhh the rice is to die for
so fat!!!!! and cute too hahahaha 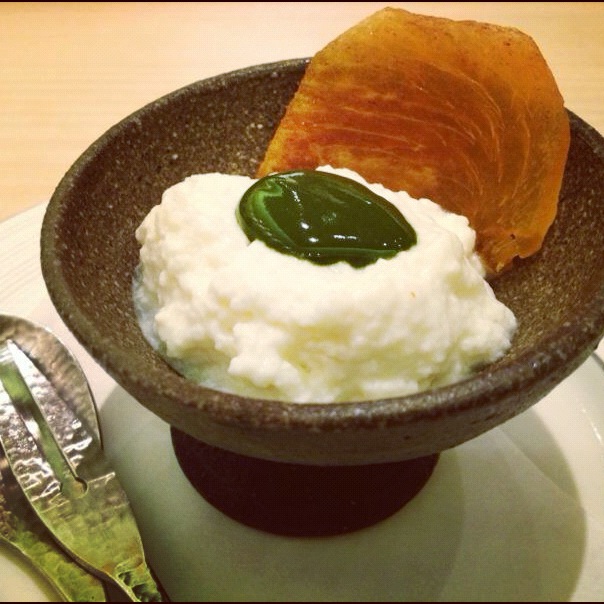 Finally with that little space left in our tummy, we had a green tea toufu mousse with a sliced of dried persimmon....really yummy :)))))

alwiz look forward to my next visit but it's so expensive to dine here...so lunch will do. I can't afford to fork out SGD 450++ for dinner per person. >.< The men said it's money well spent. That I have to agree :))))

what a lunch!! I have never heard of some fishes before too.... but anyhow, I just WANT the Otoro & Chutoro please..... :D