We walked slowly thru the main street of Barbaresco (only one street called Via Torino!) and admiring the amazing view of the vineyards wih the Tanaro river snaking lazily below and Swiss Alps in the distant and the Matterhorn just barely visible. 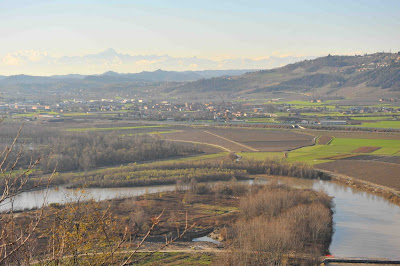 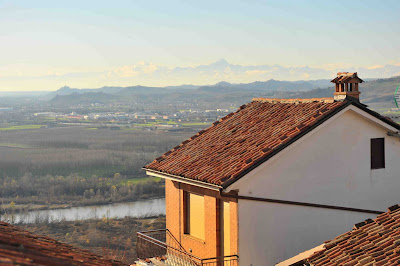 As we stood before the south facing slopes of St Lawrence(Sori San Lorenzo) which is one of the 3 single vineyards owned by Gaja in Barbaresco and world renowned(see earlier posting on Ristorante Cracco Peck and you will understand why!!)......one begins to appreciate the concept of "terroir" in winemakers vocab.
At a plot size of only 3.6 hectares, this southerly facing slopes amongst the abundantly east-west oriented slopes in this commune is the most priced as it gets the most sunlight which is much needed by the nebbiolo grapes for sugar to develop which is essential for fermentation.
On arriving at the main entrance of nos 36, Via Torino, Monkey went up to the intercom and request for permission to enter. 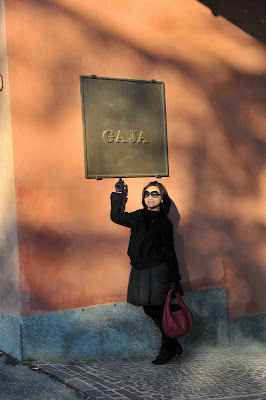 ......the big doors slide open with a loud rumbling noise and the place suddenly transformed into a big courtyard....we walked into the office and was greeted with the familiar "buonjorno" and asked to wait for our tour of the winery. This are gems man!! 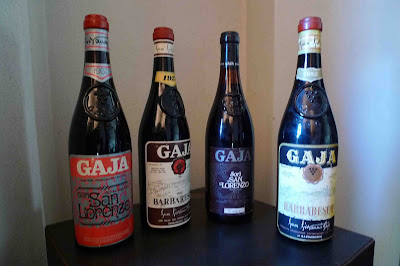 If the bottles were empty....it will still be collector's item!
Our guide was the charming and knowledgeable Allesandra(Alex) and definitely qualify as an ambassadress of Gaja. After the formalities, we started the tour.....first stop was the press where the nebbiolo grapes start their journey to becoming what is to be the queen of wines in Italy....yes, the grapes harvested are brought to this very place to be gently pressed and vinified into great wines of DOCG Barbaresco. We were offcourse not allow to watch the vinification process.......trade secret lar!!
We then went thru a series of stairs and narrow corridors and soon caught a whiff of the familiar oaky nose and we knew we have reach the very heart of Gaja's winery.....The cellar! There were loads of new french oak barrels containing this precious liquid stacked up neatly and systematically.
Barbaresco wines are aged in these barriques, anytime from 1 to 2 years.
A bit more about Gaja....The winery produces about 30,000 cases of wine in total every year from their 100 hectares of 32 plots of vineyards in Piedmonte (basically Barbaresco and Barolo).....that's rare stuff hence the exclusivity and price. note....some of this vintages are older than us man!!
By now we have actually crossed under Via Torino(tunnel) and continued our journey up to the castle thru Gaja's private art gallery and eventually to what we have been waiting for.......the wine tasting session.
The tasting room in the castle was done up with style and taste for savoring these fine wines....ambient tempreture was right......perfect lighting....nebbiolo Riedel glasses were used..... that's just perfect. In front of us were 4 glasses. We were served 4 different Gaja wines from 4 different parts of Piedmonte including the infamous Darmagi (in Italian it means "what a shame"!) which is a cabernet and merlot blend and definitely not traditional as no other grapes(except nebbiolo) are "allow" to be planted in Barbaresco but Angelo Gaja defied that.....he is the man!!
My pick was the Barbaresco 2004 and Sperss 99(barolo) with the familiar leathery and tar nose. Barbaresco gets more maritime influence compare to Barolo hence the nebbiolo grapes ripens faster than their counterparts in Barolo. Coupled with different soil type, geology, topography, weather, etc(ie, Terroir), you get a different tasting wine although its made from the same grapes.
Gaja's style of wine making has changed considerably compared to the older days. Their wines are now more approachable and drinkable at a young age yet traditional but with a nod towards modern.
After the wine tasting, sadly we knew it was time to end our tour of Gaja. Alex presented us with a book "The vines of San Lorenzo" by Edward Steinberg and how appropraite it was. The perfect reading material.....and the perfect winery tour.....and together that set the context for all the amazing bottles of Gaja that we were to open for the rest of our holiday in Italy. 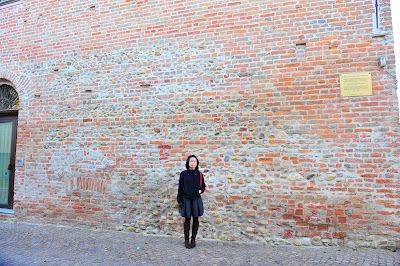 Monkey outside Gaja's castle.
As we weaved down the hilly road away from Barbaresco in the fading light, JS held monkey's hand and both took a last glance at the slowly disappearing tower's silhouette in the distant.....then we turned and smilingly acknowledged each other and without saying a word we knew exactly what each other was thinking.....yes, we will be back soon! 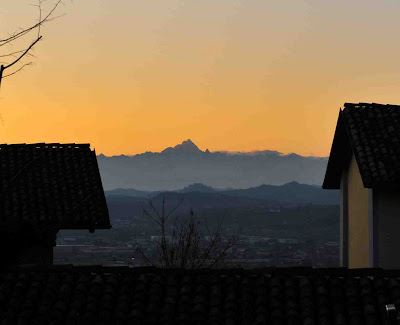 This post is dedicated to all the wine kakis out there and especially chef Lino Sauro who made this tour of Gaja possible.
Glossed by JS at 6:00 AM

always looking fwd to read about your trips. amazing photos as always.

guess blogging will take a break for a while as you head to HK to shop till you drop and eat till you can't? heheh..

have a happy new year!

licheng...i will schedule some interim reading materials whilst we are away :)

Hi Cherry
Finally got the chanche to see all the pics of your Faboulous Italian Trip!!!
I must Say the Pics are Superbs and they Really describe what everybody say when visit italy ....WOW hehehehe
I m very very Happy u guys had such as great Experience
ciaoo
lino

Chef Lino: Thank u again for this appointment. It's a priceless experience for us....see u next weekend in Spore ya!!!

Another great read! You can really picture the experience and also taste/smell the wine itself as you go through the article!