Château Haut Brion.... from the inside by *JS* 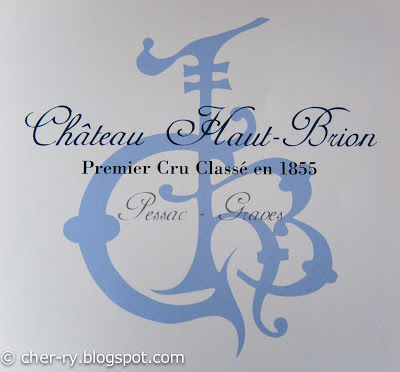 I like the logo of Chateau Haut Brion. Kind of symbolizes the grapevines 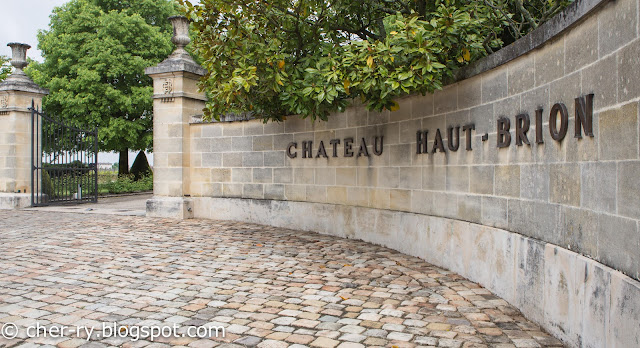 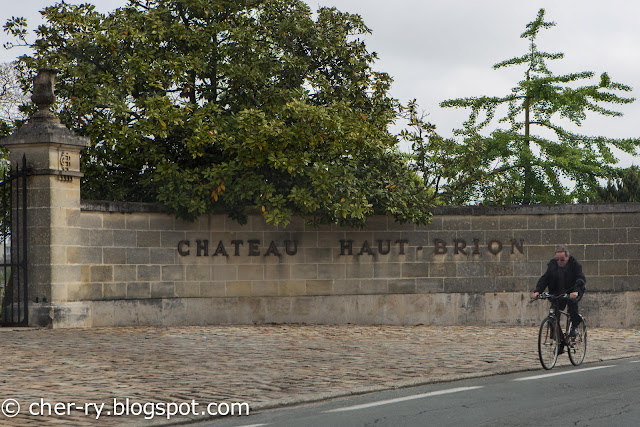 A very modest entrance to the domaine

When one thinks of Bordeaux wines, Chateau Lafite always appear first and it’s not definitely not in alphabetical order! This is not surprising as of the 4 first growth chateaus named during the inception of  the 1855 Medoc classification, 3 of them are located in Medoc and 2 of these are situated in the AOC of Paulliac and 1 in AOC of Margaux. So what happened to the 4th chateau?? Well the 4th one is Chateau Haut Brion and its not in Medoc but in Graves in the AOC of Pessac Leognan just south west of Bordeaux city.
Some facts about this chateau and her wines. Medoc was once a vast marshland and it was not until the mid 17th century that the Dutch came to Medoc and drained the marshes. Record shows that in the 15th and 16th century, when the people of Bordeaux think of wines they will head south west of the city where the gravelly sandy soil terroir produce great wines and this was way before Paulliac even existed as a vine growing commune. However of all the chateaus in Grave then, one chateau stood out for its quality........that’s Le Chateau Haut Brion. 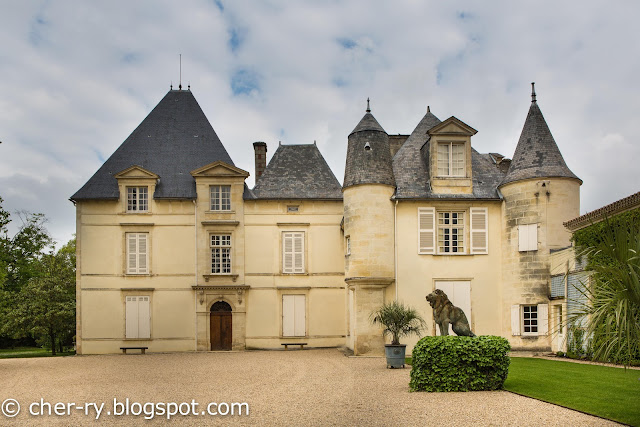 Apart from being blessed with the great terroir of Pessac Leognan, there are many other good reasons as to why chateau Haut Brion rose to prominence so much earlier on. One of the main attributes is the way the chateau owner was committed to good wine making and always striving and innovating to be the best. The two names worth a mention as part of the history of this chateau are Arnaud 2 de Pontac and Arnaud 3 de Pontac. So it is not surprising that when Napolean 3 commissioned the 1855 Medos classification system for the great Bordeaux wines, they really cannot ignore Chateau Haut Brion and hence it was named as a 1st growth Chateau. Infact in 1855 there was only 4 first growth chateau named....chateau Mouton Rothschild was named only later (hence today there are 5 first growth chateaus) for whatever good or no good reasons! 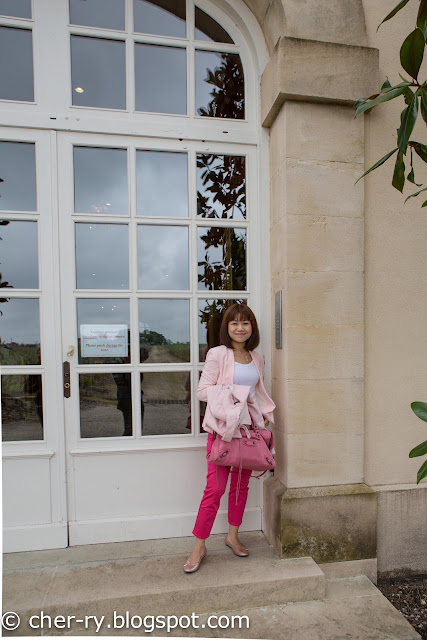 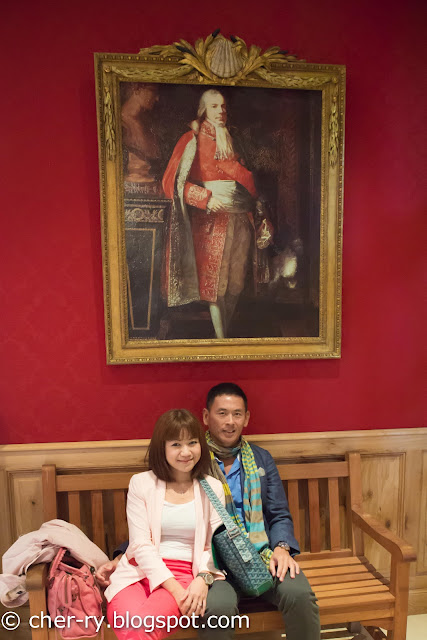 Thats Arnaud 2 de pontac's picture on top of us 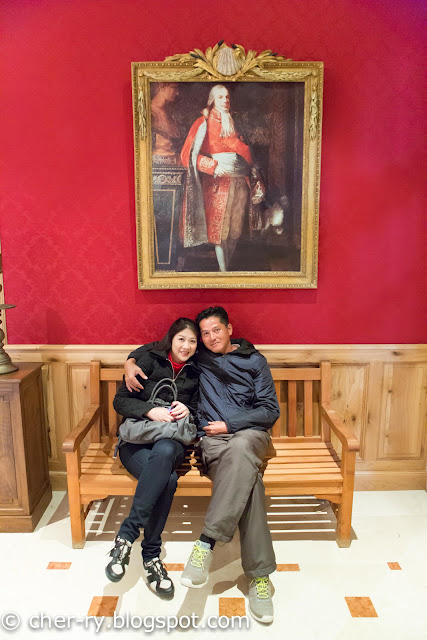 Everybody wants a picture with Arnaud 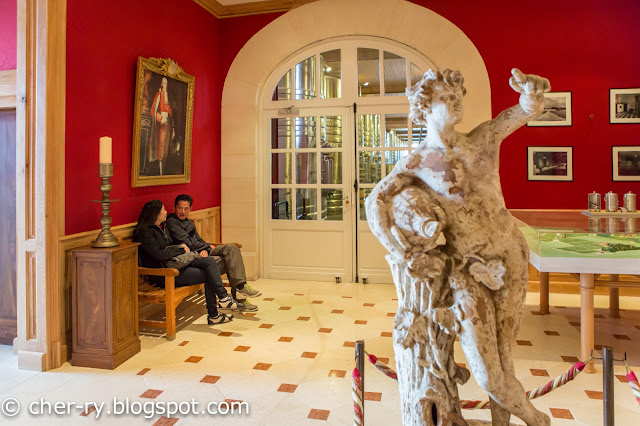 Reception area of the chateau

Production of a great grand cru wine is the convergence of what nature have to offer and human factors(ie, viticulture and viniculture). Nature provides the soil and the climate and micro climat which is the Terroir. At Haut Brion the soil and sub soil consist of large and small quartz gravel, hills, deep alluvial silt and a sub soil that is well drained. The quartz pebbles are of Pyrenean origins and washed and carried down by the rivers and glaciers during then last ice age from the Pyrenes mountain, south of Aquitaine some 1.8 to 3 million years ago at the end of the geological Tertiary era. The pebbles play a very important role in speeding up the ripening of the thick skin cabernet sauvignon grapes by absorbing heat in the day and radiating out heat during the night time which acts as a ripening catalyst. 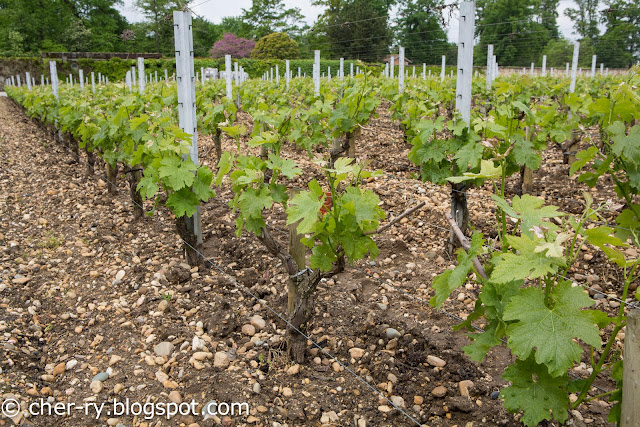 The white quartz pebbles and gravelly silty soil of the domaine 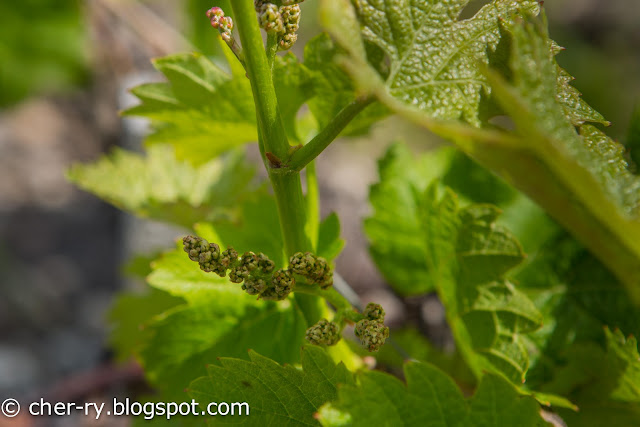 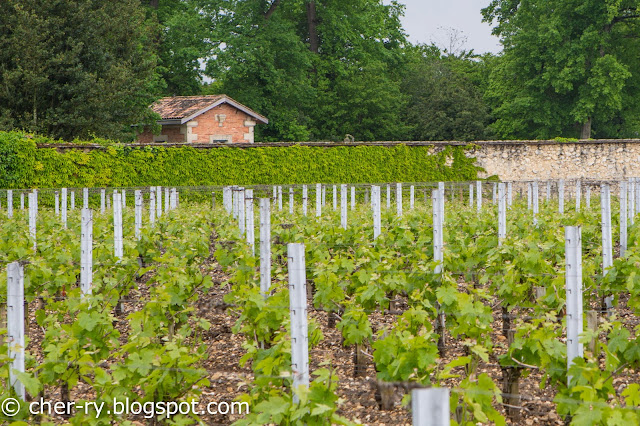 The grapevines have been pruned using the "Guyot double" method

The southerly facing slopes also ensure that the grapevines received the most sunlight throughout the year especially when the fruits developed and need sunlight to photosynthesize and produce sugar(and reduce acids) which is an important ingredient in the fermentation process.

Chateau Haut Brion is the proud owner of 51Ha of precious vineyard in Pessac Leognan. It is the smallest of the 5 first growth vineyard in Bordeaux. Slightly over 48 Ha are planted with Cabernet Sauvignon(45%), Merlot(40%) and Cabernet Franc(15%). Cabernet sauvignon gives wine structure  whilst Merlot gives it roundness and body and cabernet franc enhances the nose. One point to note here is that despite the high ratio of cabernet sauvignon grape varietal planted, the finished blend of grand cru reds from this chateau contain 55% of merlot varietal……very similar to the reds of Pomerol.

The remaining 3 Ha of vineyard are planted with sauvignon blanc and Semillon grape varietal for making the stunning and exiting and rare Haut Brion blanc.

This equates to roughly 700-800 cases per year! Believe you me…..this is very special.

The higher proportion of Merlot used at Haut Brion means that the red wine will not be as big and powerful as her counterpart chateaus in Medoc where cabernet sauvignon dominates. Infact the high proportion of merlot is similar to the great Pomerol reds except the gravelly sandy soil in Pessac produces a different wine compare with Pomerol’s clayey soil.
The first stainless steel Vats for primary fermentation in wine making was first used in Bordeaux in 1961 and Chateau Haut Brion was the pioneer with the rest following suit later on. At Chateau Haut Brion, all the parcel of grapes harvested are fermented in separate vats (one parcel one vat). 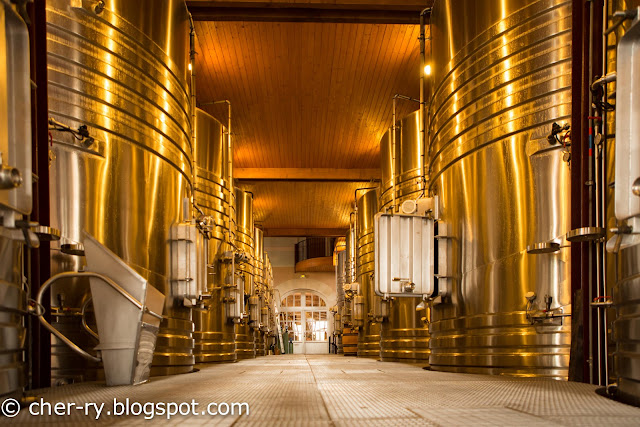 The temperature of the Vats are controlled by the cooling system using water running thru the ribs situated outside the tank. Fermentation is an exothermic reaction where heat is release. The heat also acts as a catalyst for the fermentation to speed up hence it is crucial that the temperature does not rise too high and fermentation get out of hand hence the need for a cooling system.

On completion of the fermentation and the “running off” completed, the wines are “blended”  at this stage where lesser parcels and grape varietal juices are mixed with great parcel juices and or grape varietal. I believe not many chateaus practice this as most wines are blended after the aging process in the cask or oak barrels.  Blending the wines at this stage requires vast knowledge in viniculture and also the local knowledge of the vineyards especially how it is affected by the current year's weather, micro climat, local soil variation, etc.

After blending, the wines goes thru the secondary fermentation where the malic acids are converted to lactic acids. This process is also call Malo-lactic fermentation where bacteria is added in a control environment to convert and reduce the harsher and tart acids to a softer acids. Very technical indeed.
It is after this that the wines are now put into new oak barrels. The oak releases its tannin into the wine contributing to the aromas. The oak also soak up some of the wines hence creating a small vacuum in the cask. The pressure differential then allow air(especially oxygen) to be slowly sucked into the cask through the pores in the oak. This process is the basis of aging the wine where the slow and slight oxidation contributes to the quality and complexity of the wine. 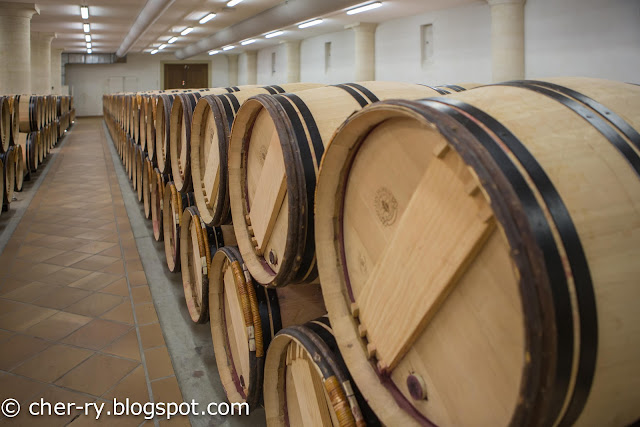 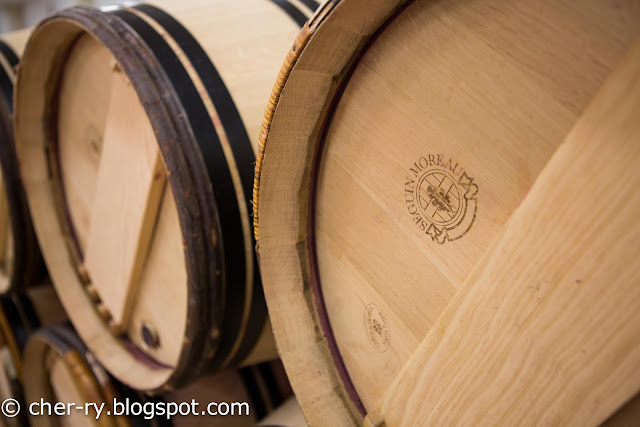 The cask are manufactured by Sequin Moreau, one of the oldest makers in Bordeaux

That was one hell of a shitload of educational stuff and information on the chateau that we picked up. Monkey made the notes whilst I snap away :)
Now it is time for us to roam the Chateau’s ground and monkey around a bit :) 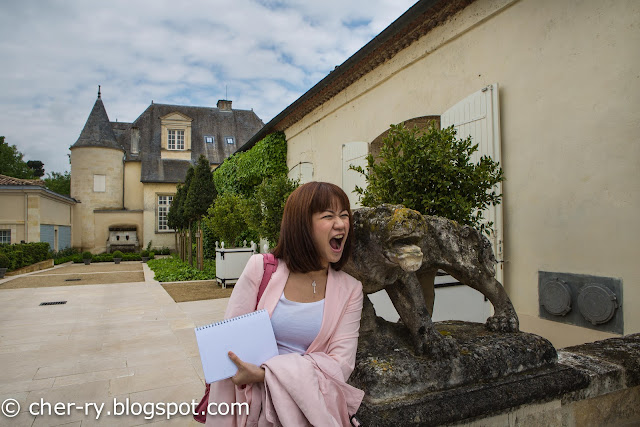 stop monkeying around with the beast :) 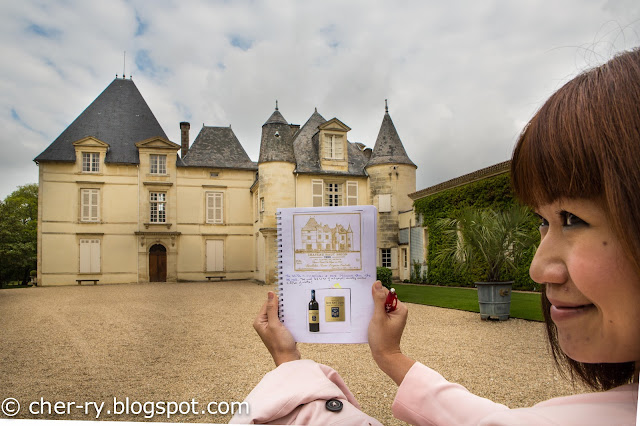 Yes Monkey. Thats the same chateaux on the label of every bottle of Haut Brion wine 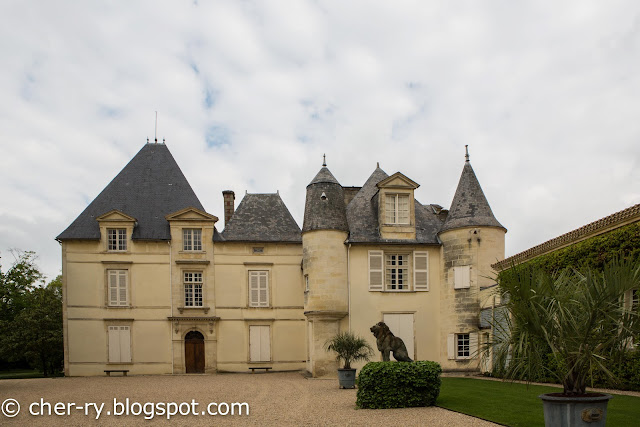 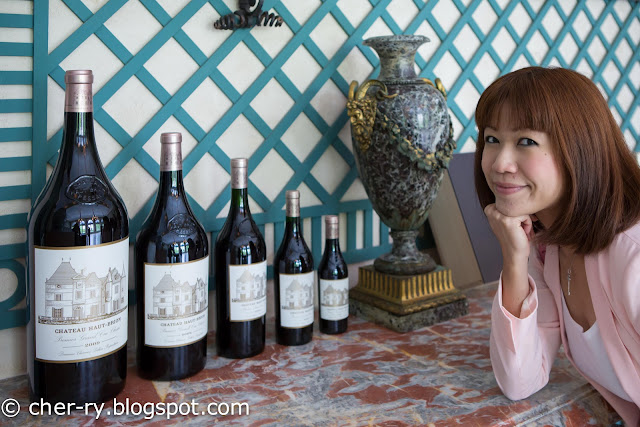 The bottles have a name given to it for its size. here goes.....from left to right.....Balthazar(named after one of the 3 wise men from the bible), imperial, double magnum, magnum and full(0,75lits standard wine bottle) and each size up means doubling the volume. Yes, Monkey we are going to taste these babies later :) 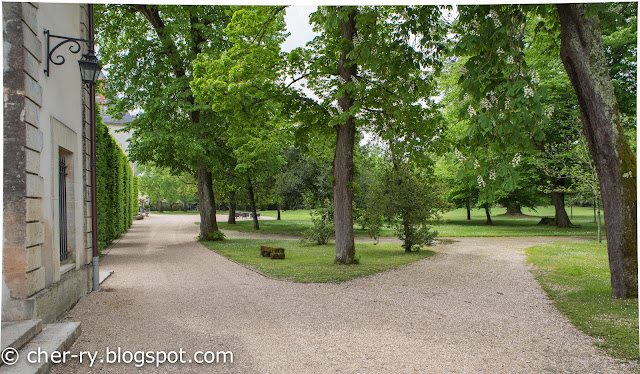 The chateau comes with a nice garden. The frenchies aristocrats really know how to live in style.....hence the french revolution i guess :)

And finally it was time for tasting.
The tasting room at Chateau Haut Brion is spacious and reminisce of pre French revolution aristocrat’s type of accommodation. Two reds were tasted. 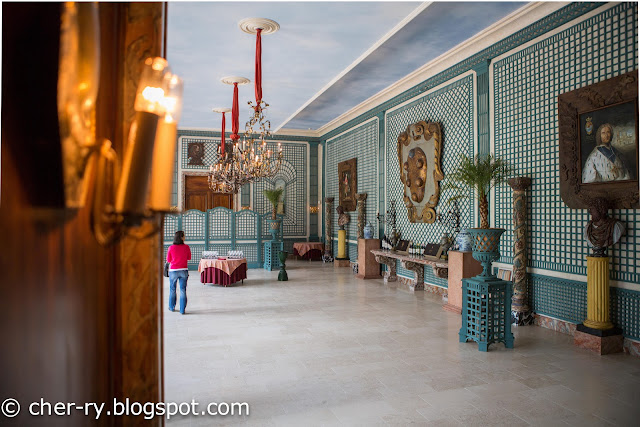 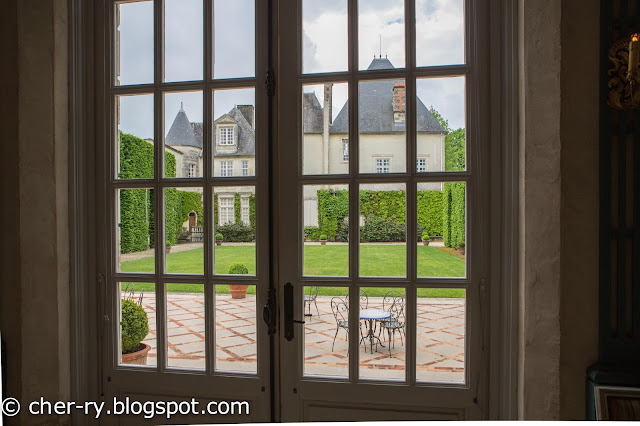 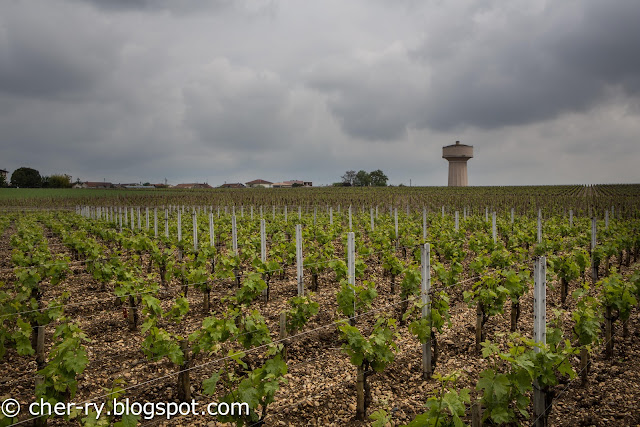 That's the water tank in the distance. The dilemma faced by growers are either too much water or not enuf water.....hence the standby water supply

The Chateau Haut Brion and another wine from her sister chateau across the road that’s Chateau le Mission Haut Brion. Both are 2007 vintage. Both the wines are made in the same way. The difference is the Terroir. Generally both wines are beautifully dense and deep red. Nose of black fruits such as black currents and blackberries dominates. There is good grip on the palate but seems a bit tight probably bcos of the youth. Tannins have begun to soften. As expected, the Haut Brion was more intense compare with the Le Mission or was it the mind playing tricks since the wines are not blinded J Both the finish was long and aromatic. It will be a beautiful wine a few more years down the road. 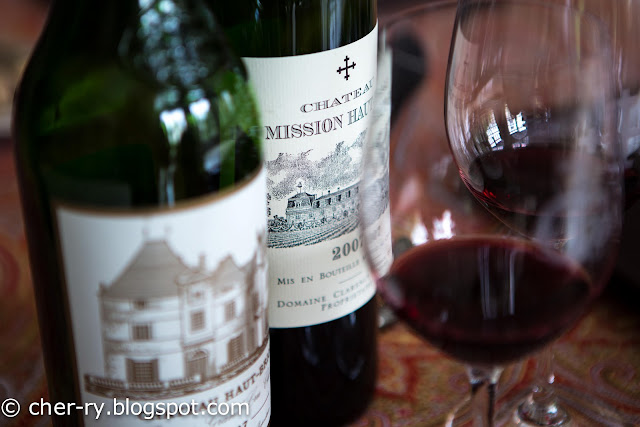 Monkey:-  where is the Haut Brion Blanc??
JS:- Errrrr…….dream on notti monkey :)

Well….it’s been a good, informative and enlightening visit albeit a short one,  to this prestigious chateau and we definitely took away with us a lot of new knowledge and experience. I believe our mind set(poor impression of Bordeaux wines) after this visit must have took a turn for the better in terms of how we see Bordeaux wines in a different light. This was really the first of our chateau hopping in Bordeaux and we have seen the best of the best……. Crème de la crème.

Thank you ST for the arrangement and the experience. The only disappointment that I would like to register was the fact that they did not open a Haut Brion Blanc for us in the tasting room :)
A few more pictures and some tourist stuff and we will be on our way…… 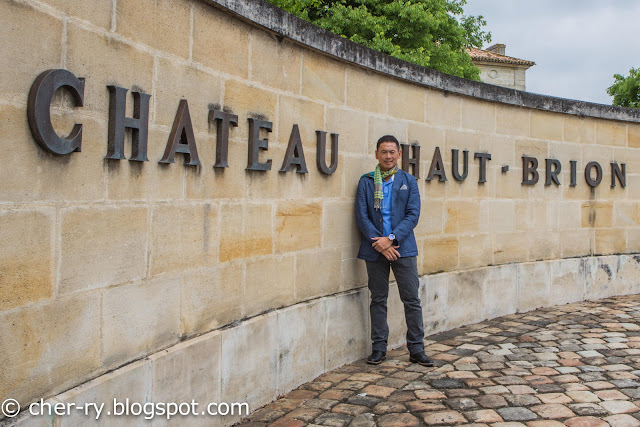 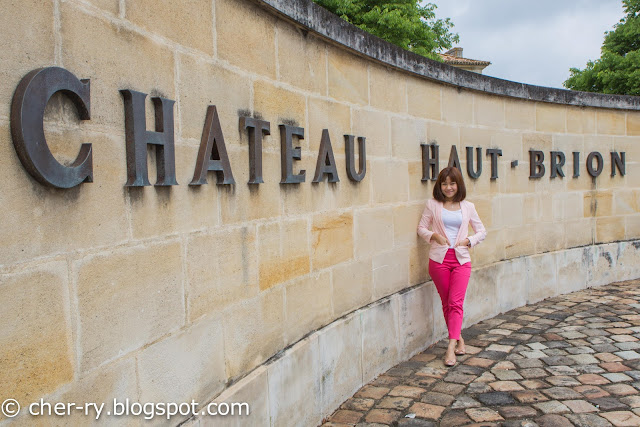 One for the album and record to show that we had a good time. I'd
drink to Chateau Haut Brion.....anytime!
yammmmmmmmmmm seeeeennnnnnnnnnnnnggggggggggggg!!

Dearie JS, thank you for the experience. I've learned so much from it :)))) Muakssss!!!!