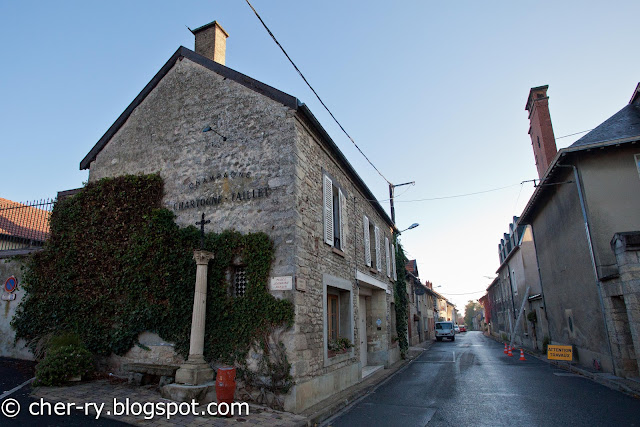 It was a cold morning sometime in November
we had an appointment with the champagne winemaker himself at 9.30am
so driving around and getting lost in these small french villages is not an option. We must arrive at the destination on time!!!! GAH!!!!! 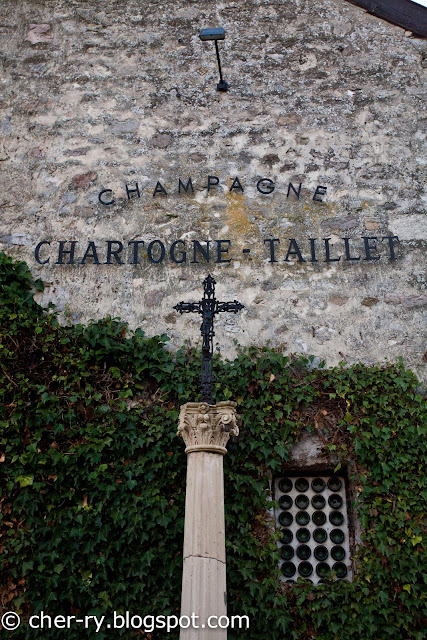 What a relief when we saw this huge signage
not every winemaker is bothered with installing branding like this.

Chartogne Taillet is situated in a village called Merfy with a population of not more than 650 people. So u don't want to get lost here, coz there's no one we can ask for directions....except the horses and the cows and dogs. 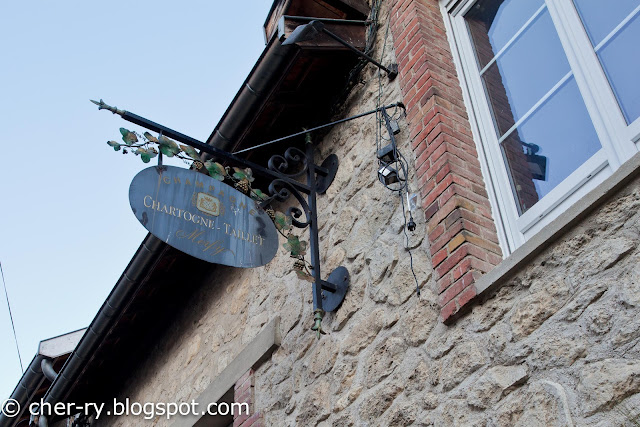 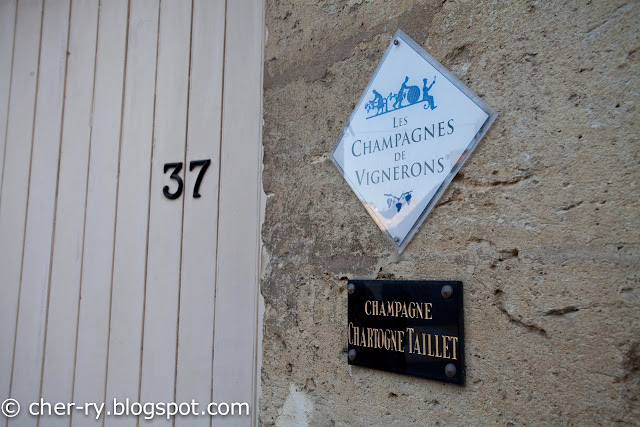 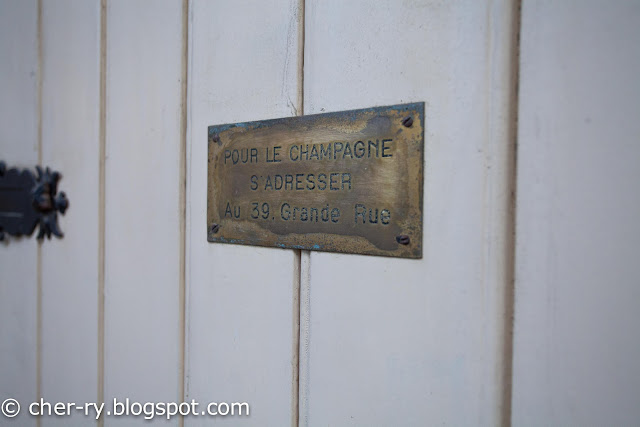 It's a huge word emphasizing the winegrowers, who also cultivate his/her vineyard to a specific terroir, they are also deeply involved in viticulture of the wines...thus making the wines which further enhance/show their terroir. In huge wine/champagne companies, vigneron are employed and highly sought-after for their knowledge and skills. However most of them are on their own working in their vineyard, experimenting in their labs, studying the soil, the weather,.....well the list goes on. 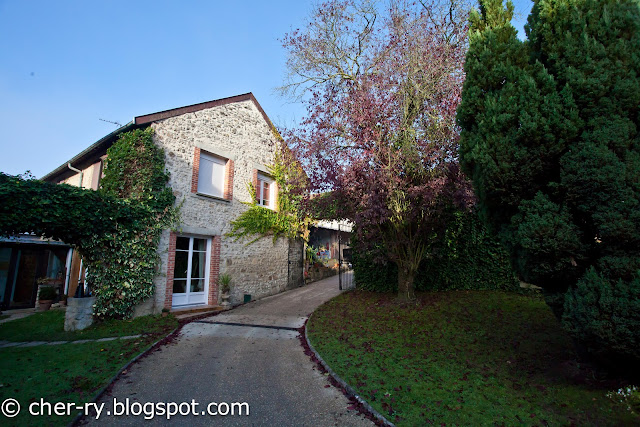 We were the lucky few to be invited to ChartogneTaillet's home and the place where he creates all his beautiful champagnes. Big thanks to Henry H for the big arrangement :)))))))) 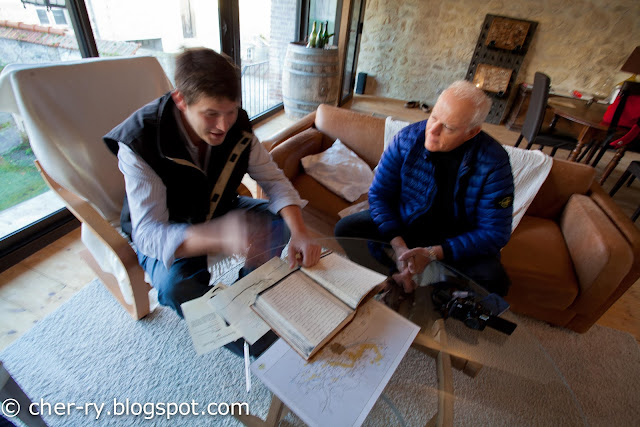 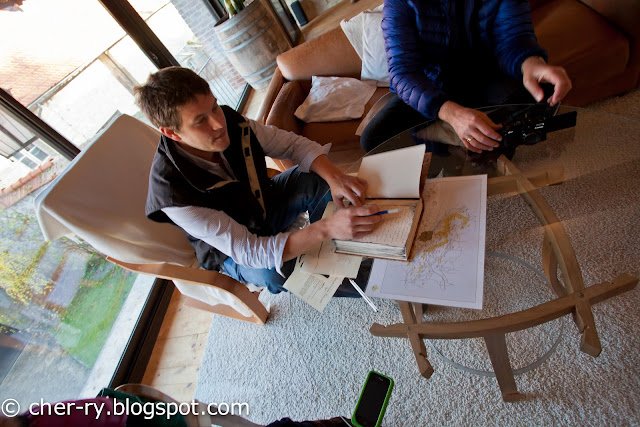 We were soon ushered into the warmth of his lounge which was built on the top floor. Beautifully designed to assimilate the tradition of french home and the modern use of glass and steel.

And in less than 5 minutes, our Geography lesson started.....
No I'm not kidding you. The 3rd generation of Chartogne Taillet, Alexandre is now the owner and vigneron of this fantastic champagne. When he took over from his father, the first thing he did was to study and examine the soil of all his vineyards.

Each parcel was dug to examine the type of soil and also the roots of his vines. Alexandre then proceeded with mapping all his parcel of vines. It's a painstaking classification but according to him, if you want to start something....u have to go down to its root and in this case this was precisely what he did :))) 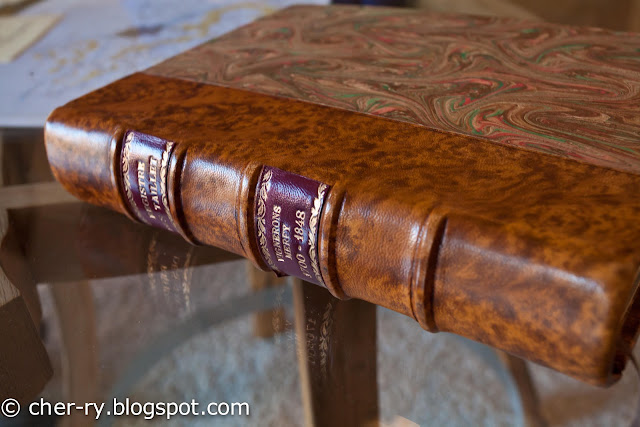 After our geography lesson was done....it's History lesson
I'm not kidding u again!!!
>.< 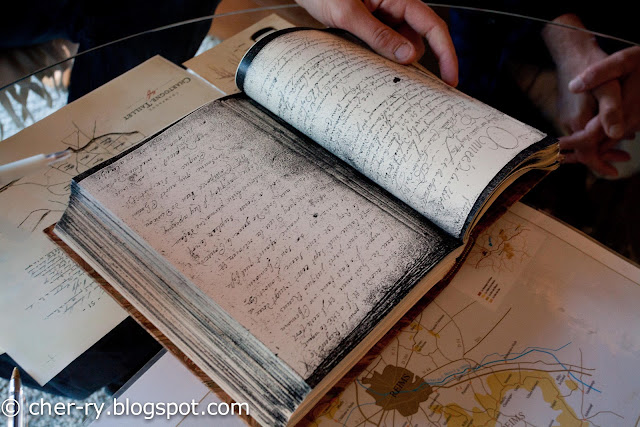 in heavily binded leather copies were notes from his ancestors on the winemaking techniques and "recipes" :))))

Alexandre added that he's really lucky because there were notes left from the 19th century by his ancestors. Together with his studies on soil, roots and plants - Alexandre managed to produce champagnes by maximising what he has, at his property. 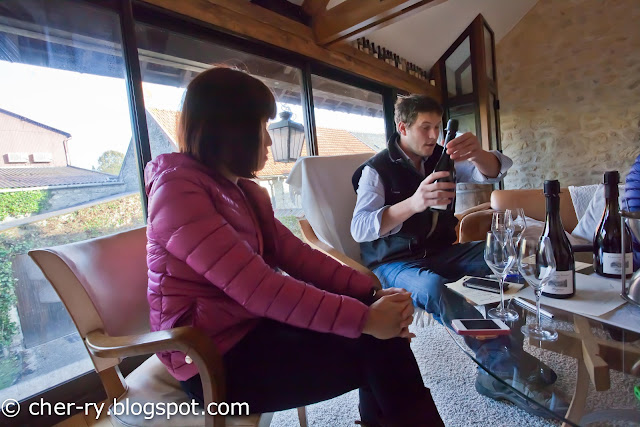 Next we begin with tasting....
yeah I know it was 10am in the morning but again...it's never too early for champagnes
:))))))))) heeeeeeeeeeeeeee 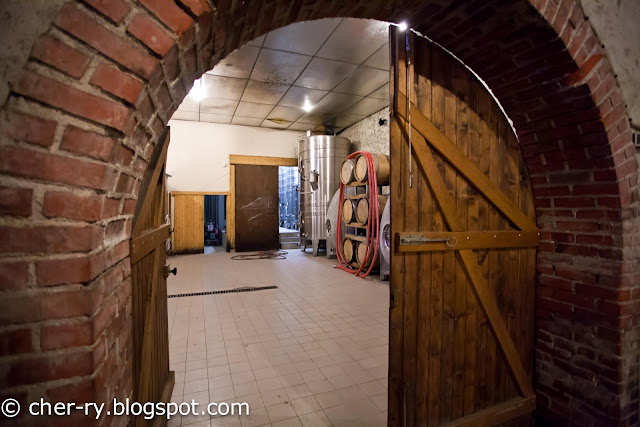 Alexandre then brought us to his playground :)))))
the cellar 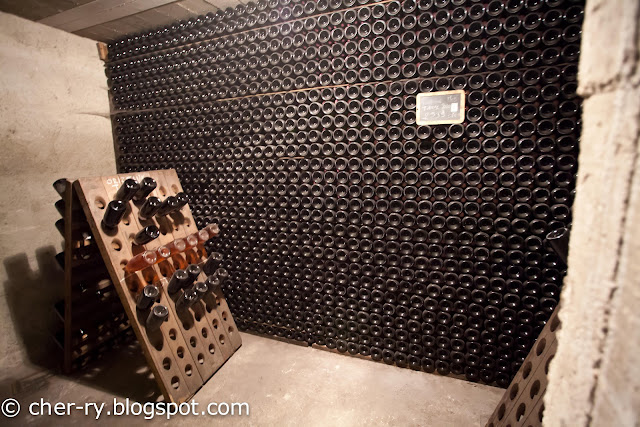 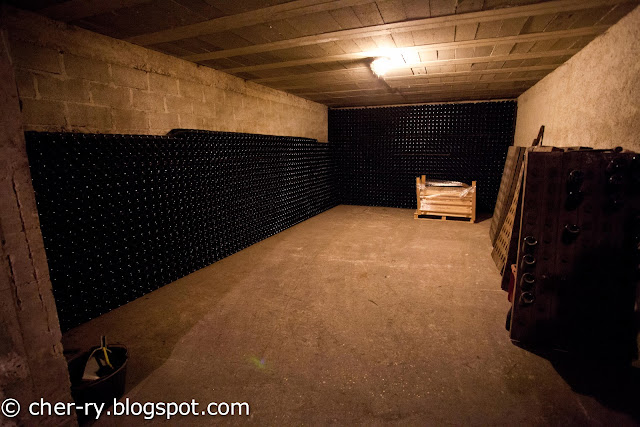 I don't know how do u arrange that neatly by hands
I can't even have proper arrangement inside my shoes rack!!!!!! 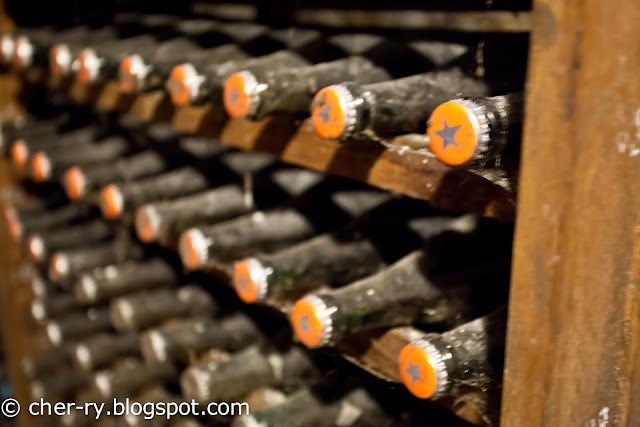 When the winemaker decides it's time to disgorge, all these caps will be popped out to "flush" the sediments. This method had been done many hundreds of years ago but in today's environment it is practiced much more safely. Many a times people lost their thumb disgorging champagnes. The pressure popping outta the bottle is just too much. 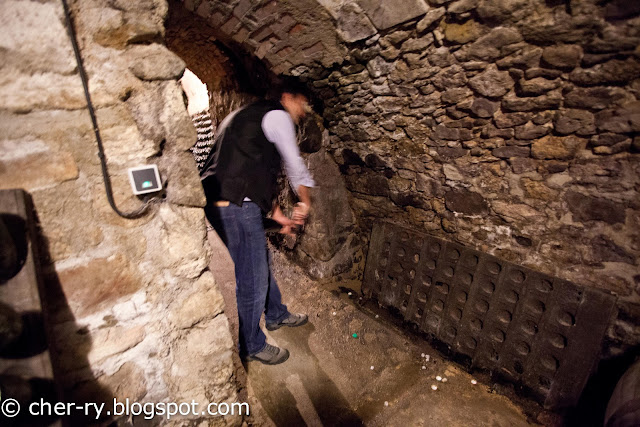 Seen here, Alexandre popped another bottle for us to drink inside the cool chill cellar
underground cellar usually maintains its temperature all year round. Doesn't matter if it's winter or summer....that's the beauty of it and makes good storage for wines. 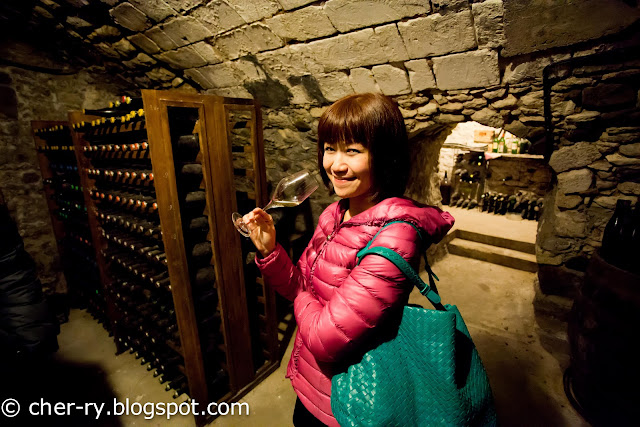 Yes...it's quite chilling in here....you will def need a jacket and a glass of wines/champagnes to warm your body up...hehehehehehe 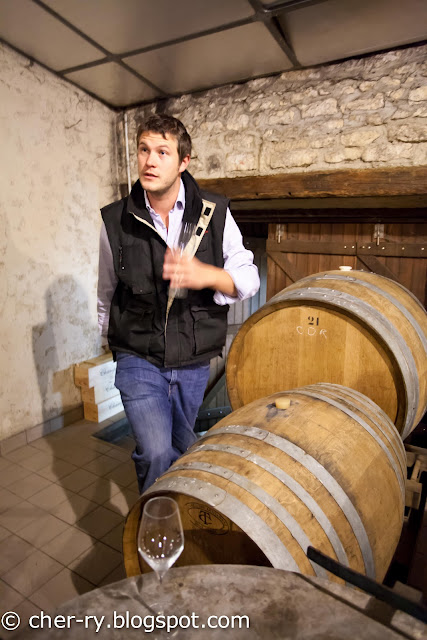 Alexandre is really passionate about winemaking. He's really young but full of philosophies and principles when it comes to his champagnes. Again his love for terroir fuel his passion in winemaking. He only plowed his land with animals and not with machines. If you've been following this blog, u'll understand why :))))) 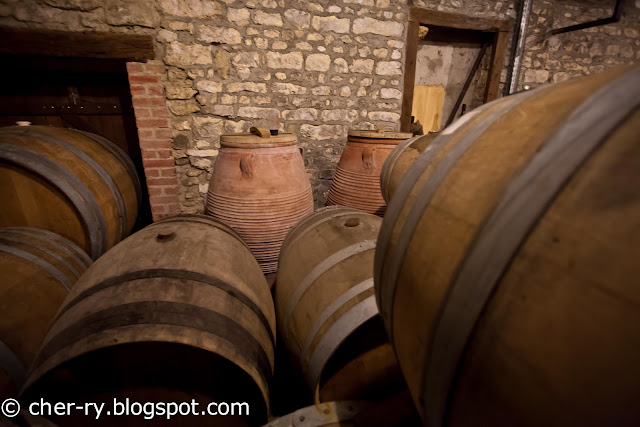 There were a few clay barrel inside his cellar. Not many winemakers used clay to age their wines. This was such a delight for me to see.

Because there are sand and clay over chalk - the character of his soil, the roots of the vines needed to go down deep to extract the minerals. According to Alex, it can go down as deep as 20 metres. And of coz he vinified each parcel separately. There's a hell lot of work!!!! 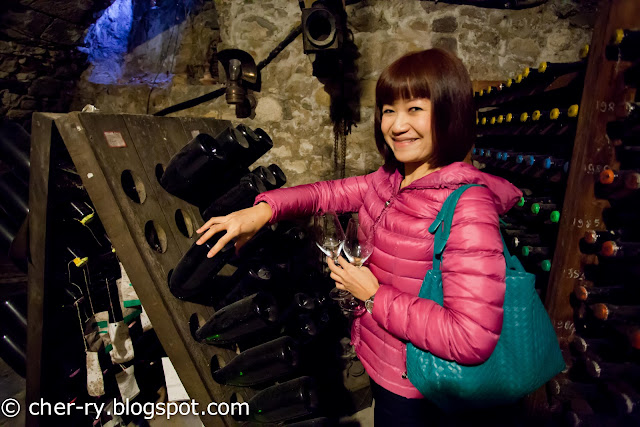 Hence I don't mind offering myself to work here for errrrr free champagnes???
Yes he prollie needs help to turn the bottles each day. A certain degree a day to slowly move the sediments down to the bottle neck. I really don't mind, especially how often do u get a good looking boss? tee hee hee :))))))))))) 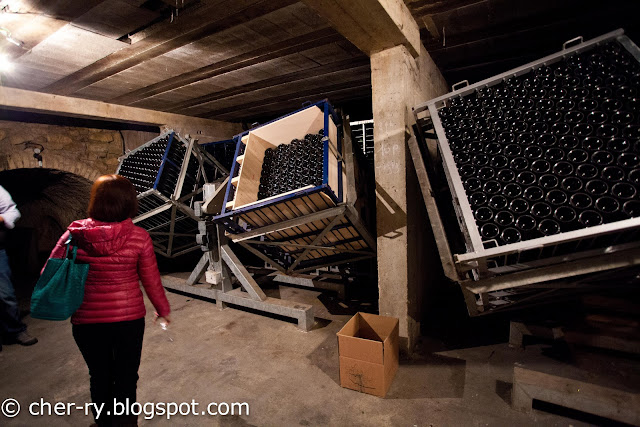 Then JS showed me this area....

JS: "Hey look!!! there's machines used to turn hundreds and thousands of champagnes each day in a precise degree calculated by the computer. Definitely faster and more precise than your hands."
he beamed his cheeky smiles 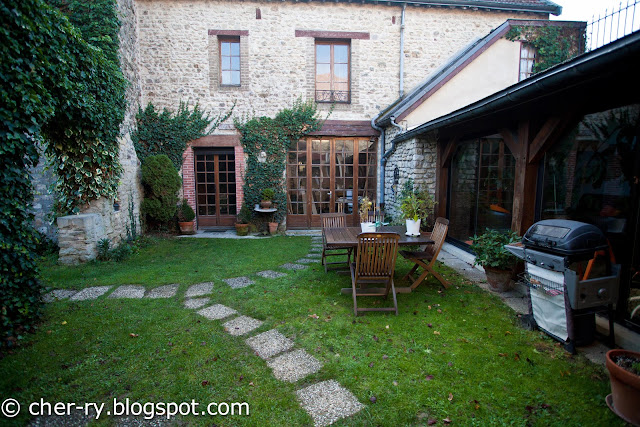 As we emerged out from the cellar at another exit, we have a glimpse of Alexandre's beautiful garden where he enjoys a nice sunny day BBQ-ing with his family and children...well only during non-winter months hahahahha. 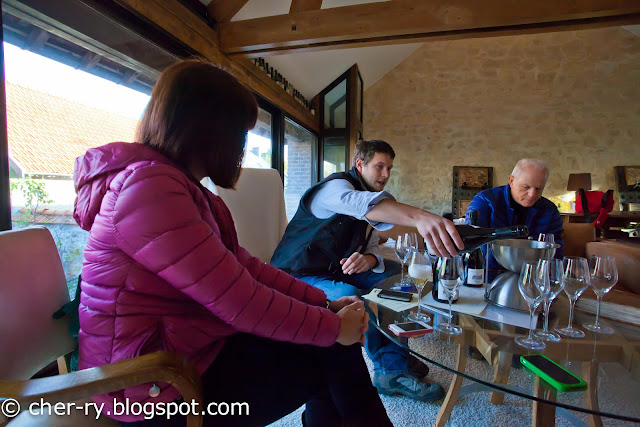 We then proceeded back to the lounge for more tasting and discussions.
Alexandre also used very low dosage of sugar in his champagnes. All makers need to add some sugar into each bottle because all the natural sugar in the champagnes would be aged and fermented into alcohols. The less sugar it has, the drier the champagnes. 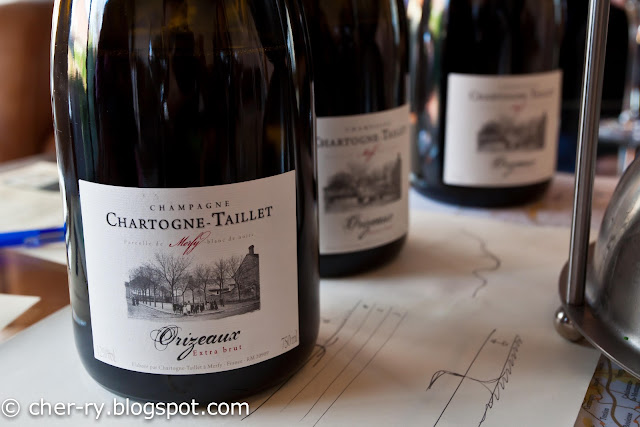 It was such an educational meeting with Alexandre
the more we learnt the more we realised we didn't know :P
now we popped every bottle open with more appreciation. :)))) 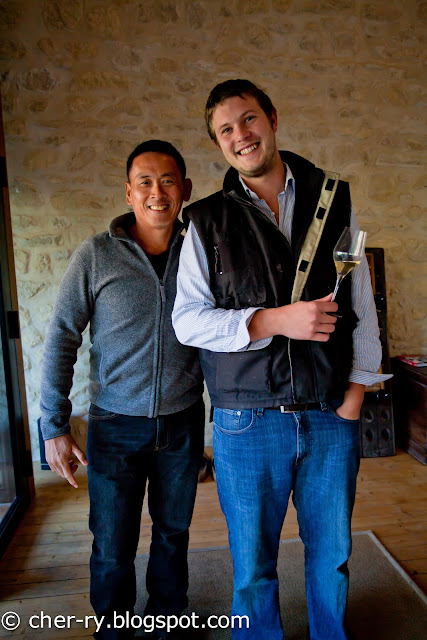 Before we take our leave and bid farewell.....a pic with the Vigneron himself :)))
JS looked so tiny next to him hehehehehehehe

Big thank you to Henry H our ever reliable wine merchant for this visit
and most of all thank you to Alexandre for this hospitality and imparting knowledge and skills to us. I can see now our cellar is piling high with more champagnes but I'm not complaining :))))

love the pic of the gorgeous blue sky,lavender tree and house scene!

to show such passion for something never fails to amaze me! I like the design of the champagne label!