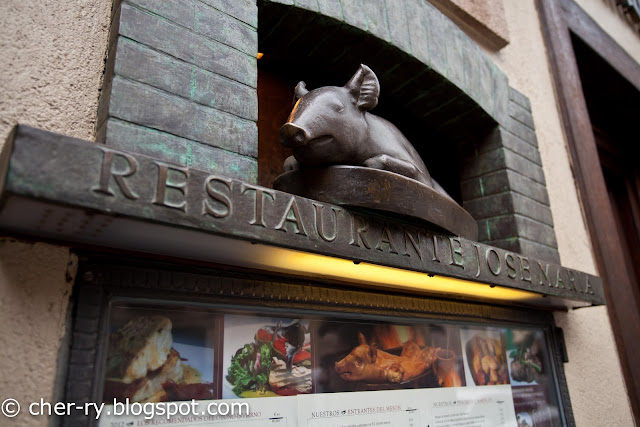 When u see a piglet like this outside a restaurant....it has got to be good hahahaahah.

Dinos the Great was hungry and started hunting for lunch around 11-ish in the morning...He asked a local and we were directed to this restaurant....the most famous restaurant in the entire city of Segovia..well not like it's a huge city anyway.

Situated right smack at the Plaza Mayor, the largest plaza at the city, it wasn't difficult to locate. Started in 1982 by Jose Maria Ruiz himself, it is a must visit whenever you are in Segovia. 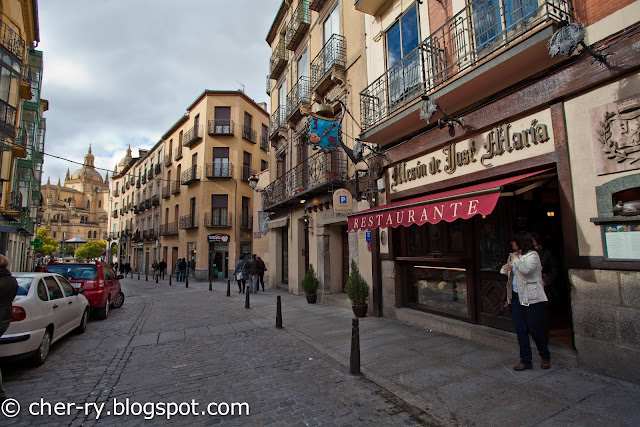 the front facade of the restaurant....u cannot miss it..
however it looked small...but don't be fooled bcoz this restaurant can seat about 300 diners. 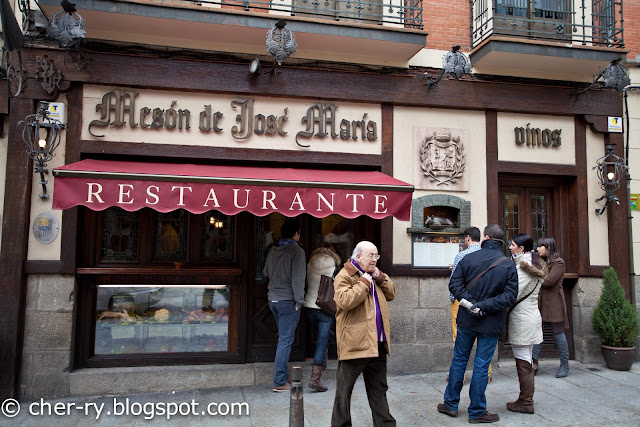 You will need to come here early....bcoz though it can seat 300 pax...the entire Segovia comes here. And all the tourists are here as well :P
Thinking it may be a tourist trap, we just walked in coz the smell of roast suckling piglet was too difficult to resist... 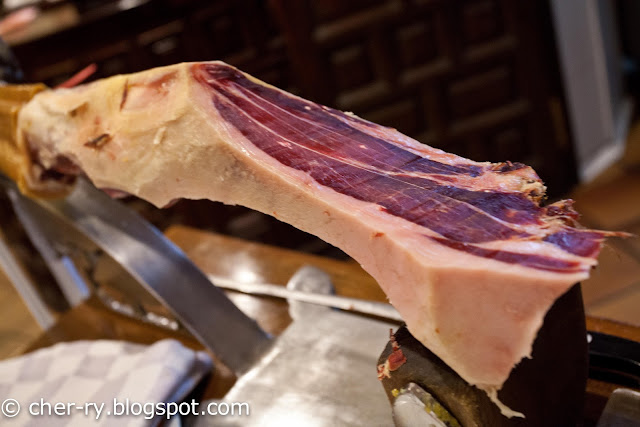 We were then ushered into a large comfortable dining hall...and past by a leg of ham...hehehehe
look at the marbling of fats...so so so yummy 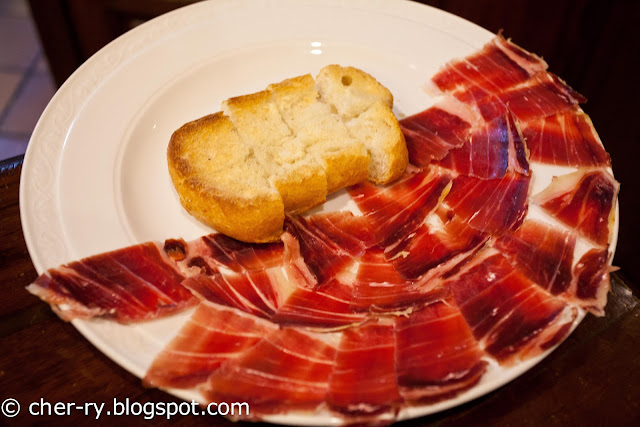 using a special knife, it was then carefully cut as thin as paper for full enjoyment
aaaAAaaaaaa.....our favourite in Spain..can't live without it each day, even early in the morning we have that for breakfast :P 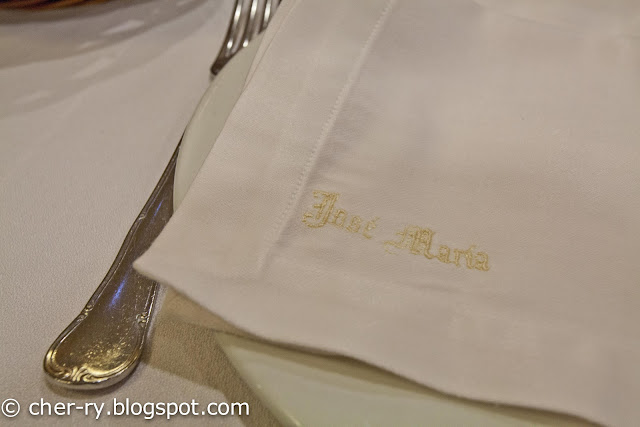 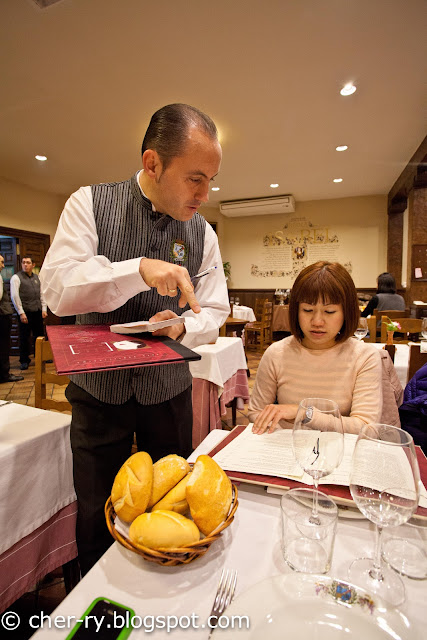 ordering *or trying to* some food off its menu....in my super broken can die dot com Spanish

Thank goodness there's english in the menu but then the description does not reflect the actual thing so u just need to ask what was it and let them describe to you in perfect spanish while u scratching your head trying to figure out was that leeks or shallots he was saying.... 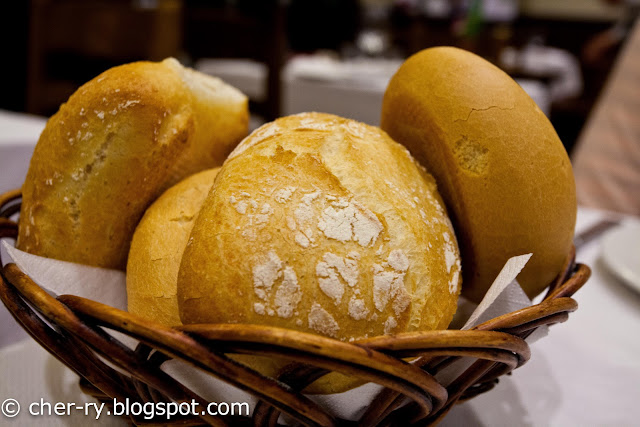 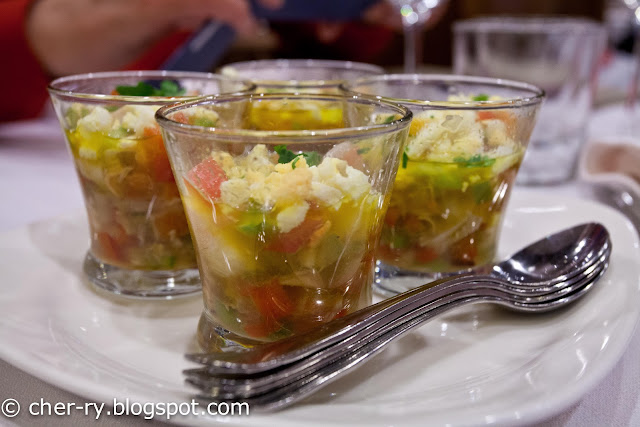 Amuse bouche was then immediately served.
Prollie the looks on our face - We.Are.Hungry. 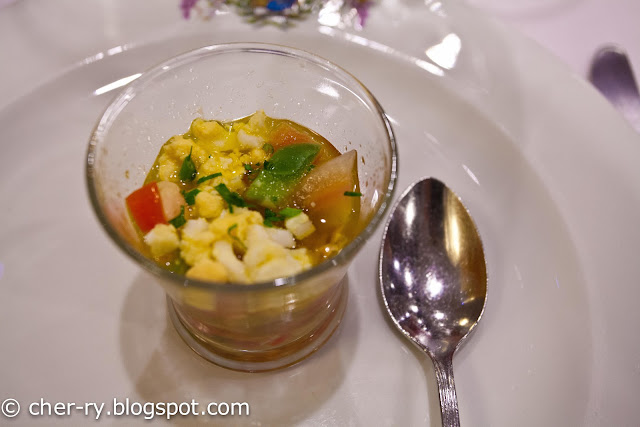 it looked so normal but actually very very appetizing!!!
the sweetness from local tomatoes, green peppers, onions and then topped with eggs.

It's sweet and sour from the acid of vinegar used.
Hidden in between those greens were pieces of squid and prawns. 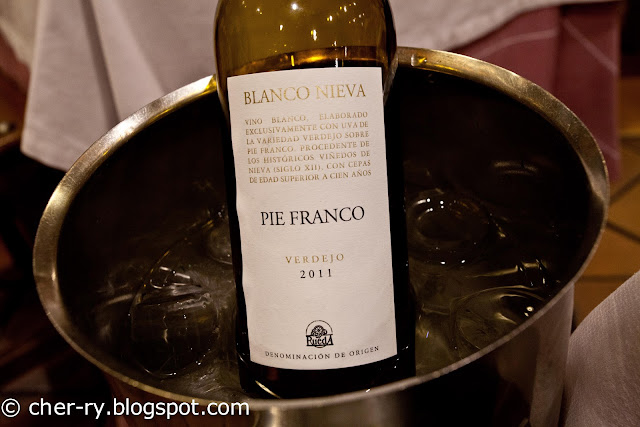 No meal is complete without Vino :))))
heeeeeeee yes we are alcoholics :P At such restaurant u don't expect to find our kind of drinks but any good local produce is good enough. Never under estimate spanish wines and alwiz be open mind to try everything :)))) 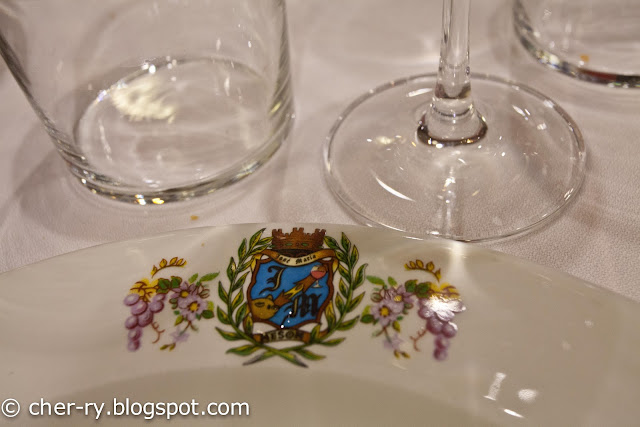 There's even emblem to all of its plates.....beautiful!!!
Apparently this restaurant received a bad from the Minister of Tourism of Spain...
wow!!! 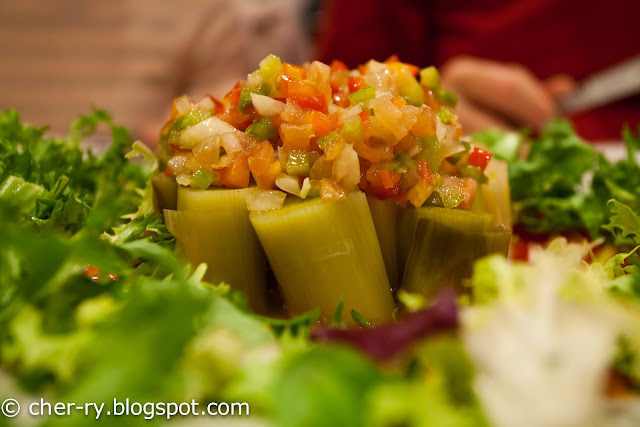 We ordered a local starter of HUGE SWEET yummy Leeks grown locally, drizzled with vinaigrette made by the monks in the Monastery of Segovia...
wow how special was that :)))) 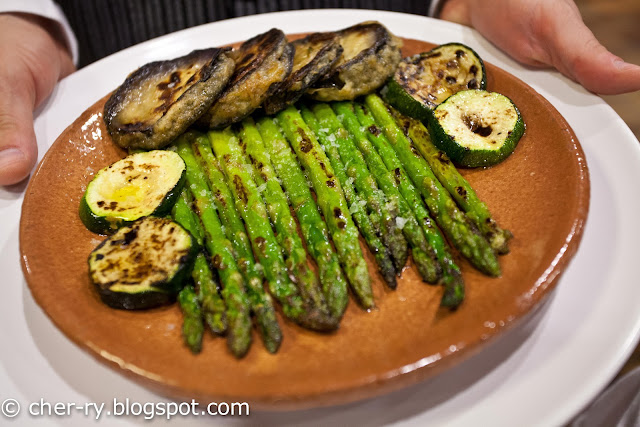 local greens of zucchinis, asparagus and brinjals.....grilled and then served with local olive oil and sea salt...so simple and yet very very very yummy 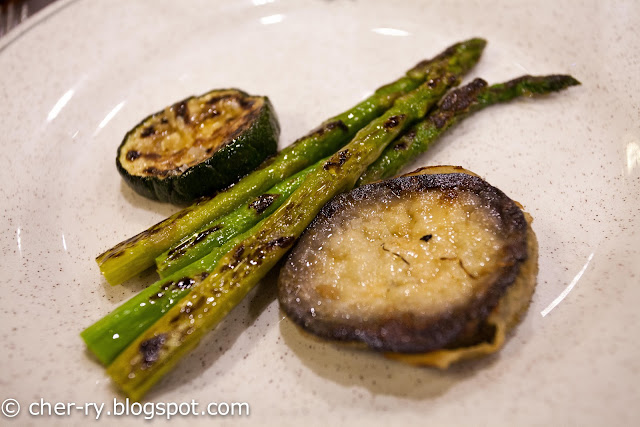 This was a very good dish...highly recommended 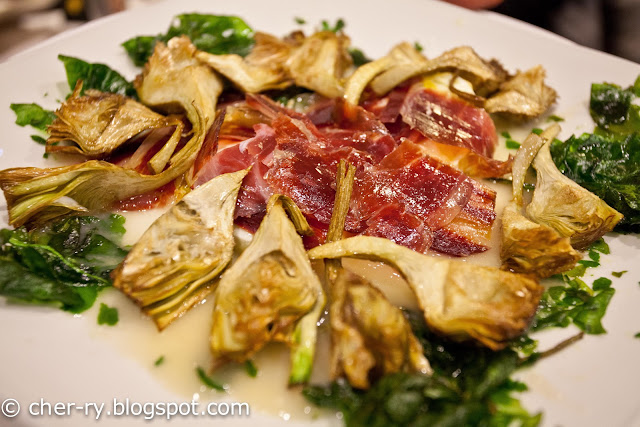 I do not know what dish this was called but the description alone is gonna make u salivate...hehehe
thinly sliced "best ham in the world" which was the Iberico Bellota served on top of soft boiled eggs...oh my...eggs and ham is alwiz a good marriage..so as u dig in, just break the yolk and mop the plate up with your slices of hams.

then there's pieces of tender artichokes which was fried on the sides with crispy fried flat-leaf parsley. Really really good combo of earthiness and savourines. 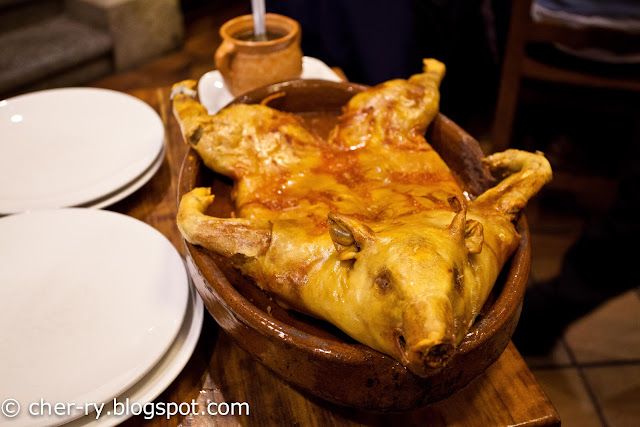 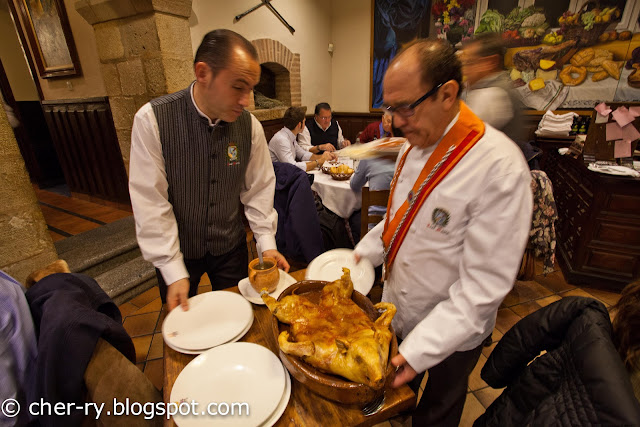 Then the bigger "bomb" came.....Mr. Jose Maria Ruiz himself!!!!!
WAHHH we are sooooo lucky!!! He's gonna serve the piglet!!!
Decked in clean white chef shirt, he was wearing a few medals which I supposed must be some kind of honors/awards he has obtained from some really really important institution 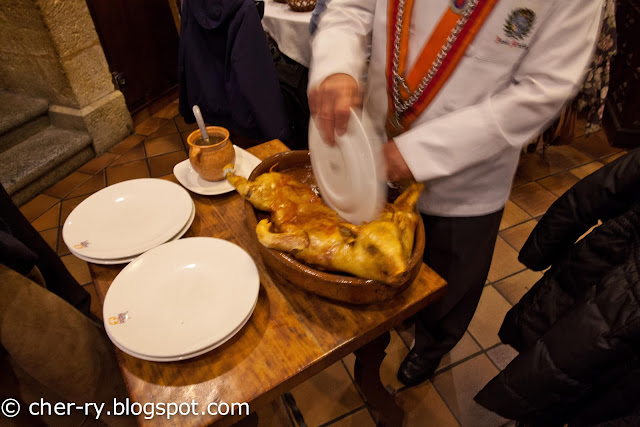 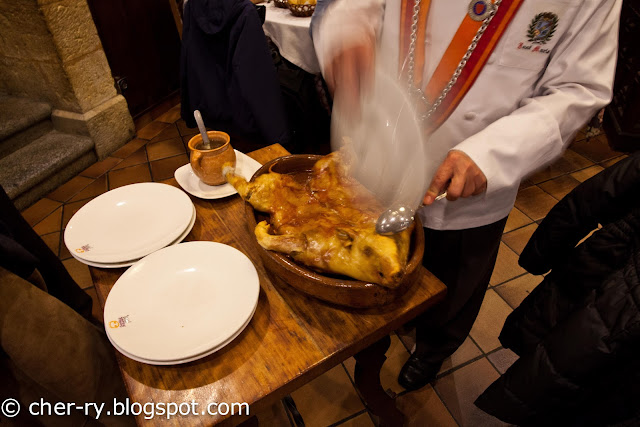 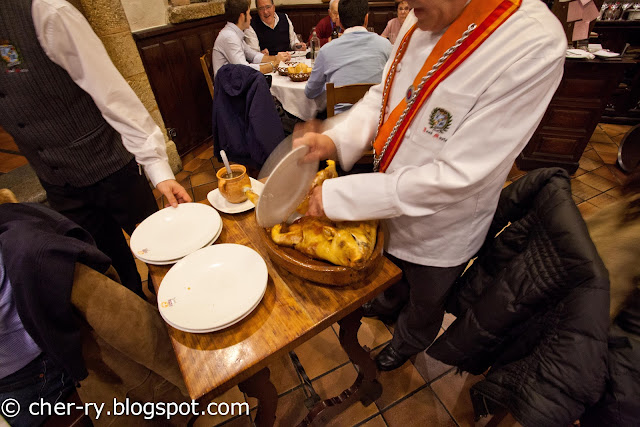 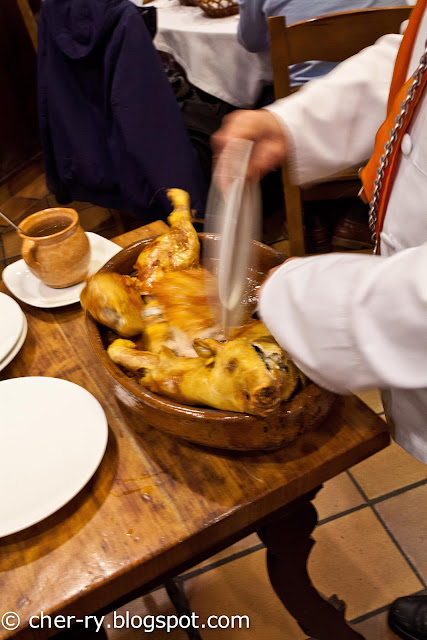 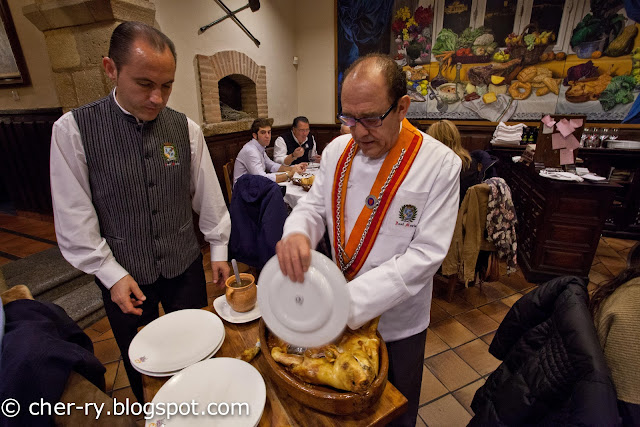 In case if u are wondering, nope he did not break the plate
he cut it with such precision that each blow breaks the crispy skin, the soft juicy meat and all the way to its bones. 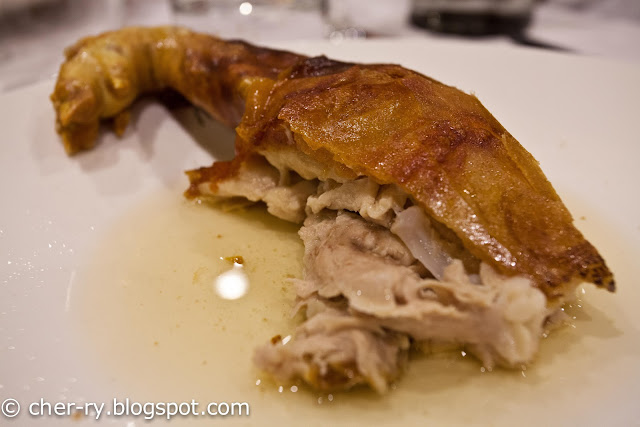 If you would like to compare these to our dearie El Cerdo in KL, Malaysia...
Please. Don't.
It's so different and so suckling yummy good
out of this world~~~

the skin is very very thin and cripsy, while the meat was so soft
I noticed there's no fat at all...so it's not something yucky as compared to-you-know-who
served with a clear juice from the pig itself...
no other sauce needed...can u believe it?

I have never enjoyed suckling pig this way - without the sauce..
It was really so so so damn good, u just need to eat it on its own. 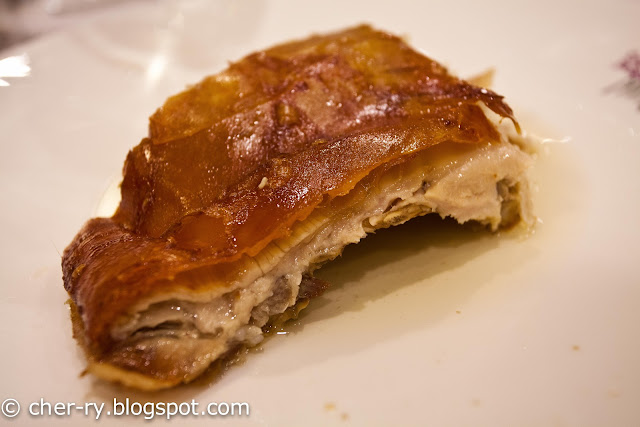 See what I mean when I said there's no thick layer of fats???
everything was finger licking good right up to the bones.

Later we found out that Mr. Jose Maria Ruiz has his own farm rearing pigs to his high standards. His pigs eat barley, corn, rye and wheat to give it this delicate texture of meat and skin with good flavour. 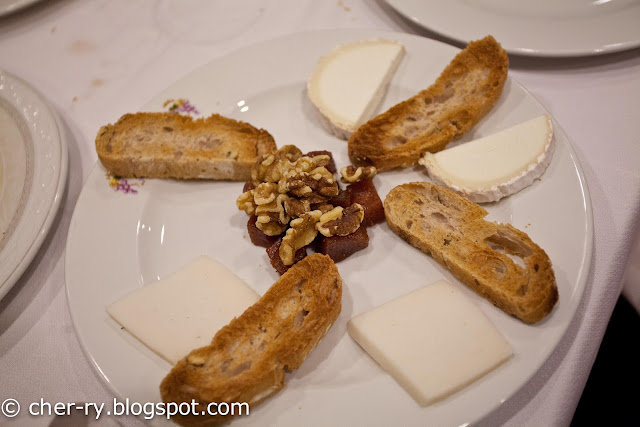 Since we were so stuffed with all the yummy good local food...everything locally grown or organically reared, we can't possibly put anymore food into our mouth. So Dinos the Great suggested we will have local cheese. 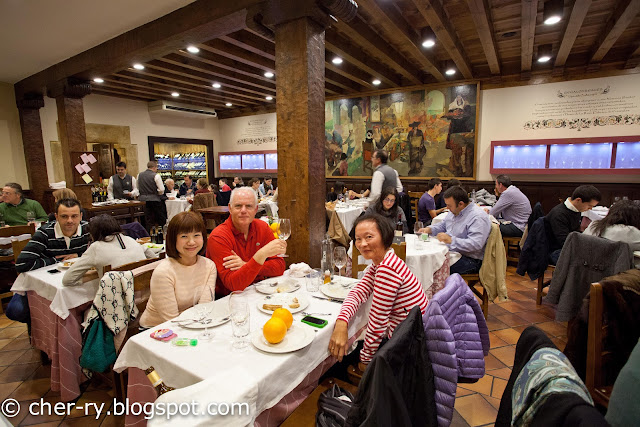 U must be wondering why do I refer them as my innocent lambs and sheeps coz they'll just tag along Monkey wherever she goes...just like Mary and her lambs :))))) With no questions asked...they'll just followed innocently...even if I am bringing them to the chop-chop-house...hahahaha. Thank you for accompanying me to all the ridiculous and not so ridiculous places that I wanted to go :))) 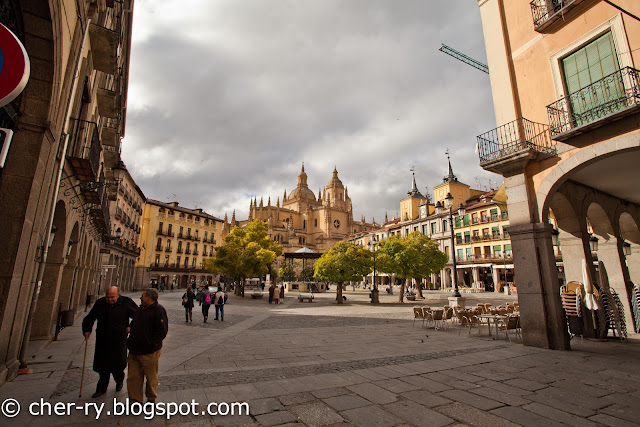 Plaza Mayor overlooking the Cathedral of Segovia...This was actually taken outside the restaurant 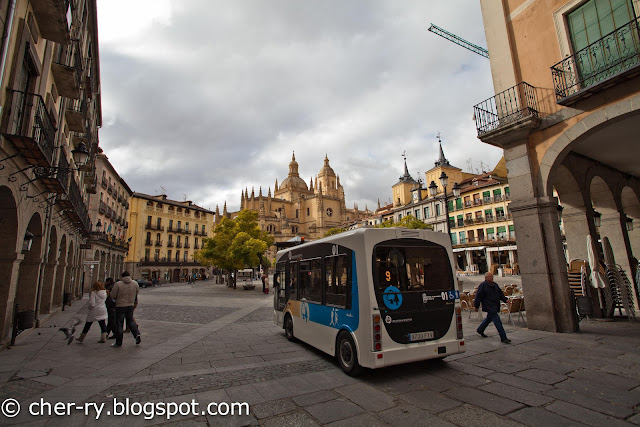 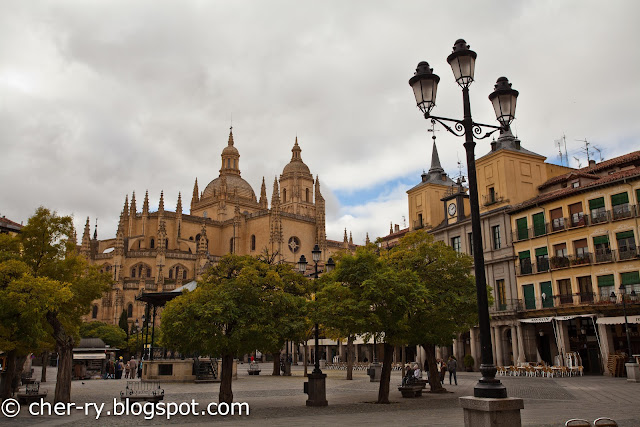 so folks..if you are traveling to Madrid..do make time to drop by at Segovia...
A day trip will do, afterall it's only 30 mins by the high speed train :))))

all the glorious hogs...if this is what you have for breakfast & lunch, I m wondering whats for dinner :P

Food Dreams: so I guess u are a piggy person eh? tee hee hee