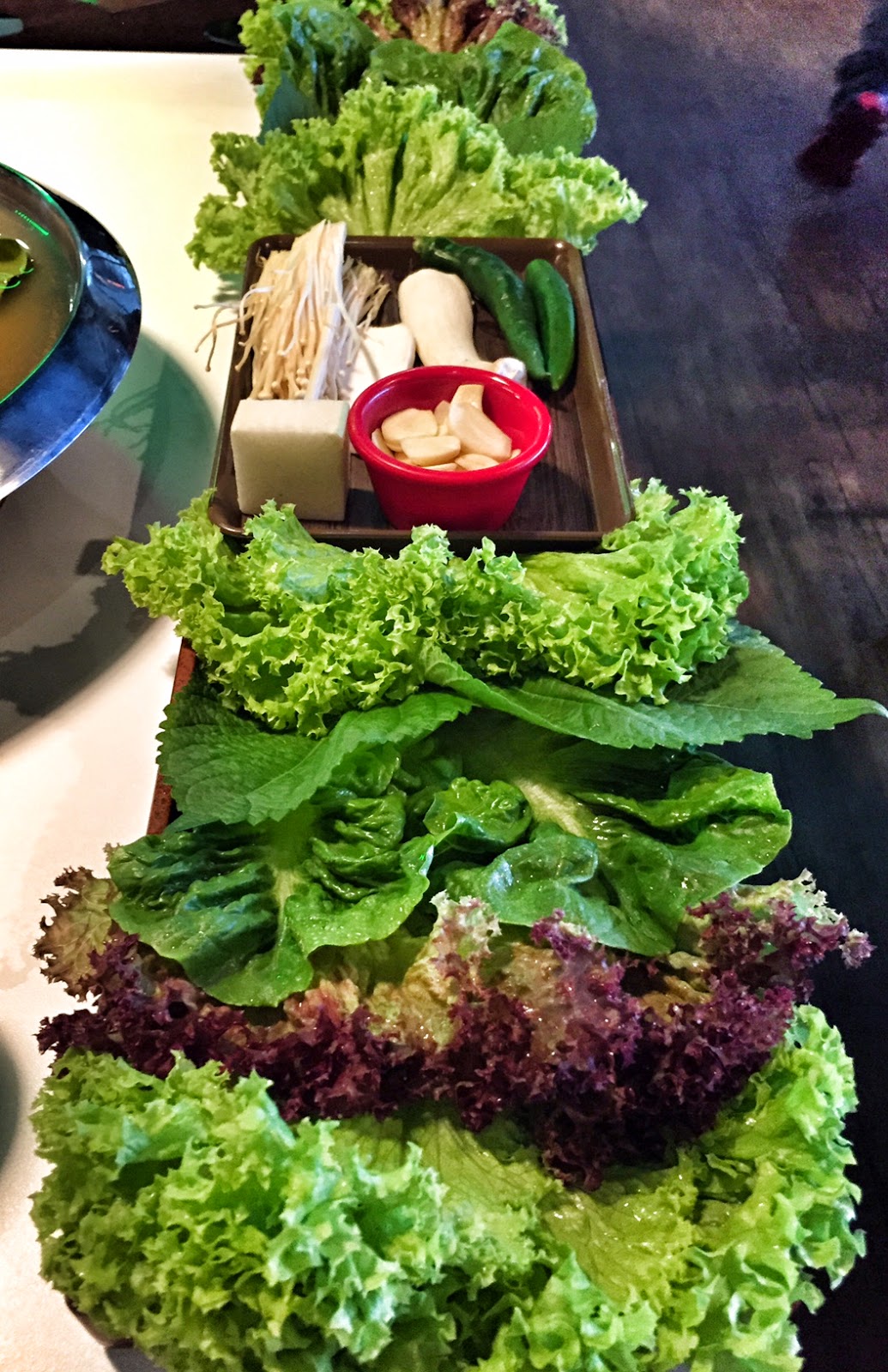 We have been planning for a get together for ages.
It's either one of us are travelling for work/leisure, hence making the trio never complete.

Monkey's schedule is usually booked 2 weeks in advance to the horror of certain friends.
Brandon C: "Wat??? the date u gave me is 3 weeks later, can't we do like this week?"

-_-" yeah he was complaining bcoz Fab and Monkey took turns to be away. Leaving Brandon C with no choice, he had to succumb to the majority votes, and the date did finally come and he was so excited and recommended a really nice korean BBQ for all of us to try.

Palsaik Korean BBQ in Scott Square is the 2nd branch with the main one located in Solaris Mont Kiara. This was the perfect location since all of us work at different parts of Klang Valley, so to be fair, we meet in between and had something in between Japanese and Chinese. Brandon C insisted that Fab is a chinese cuisine guy while Monkey is a devoted Japanese Doll. Oh well the mission here is to get together after a freaking 6 months trying to meet and food comes secondary. But if the food is great as well, that would be bonus. isn't it? 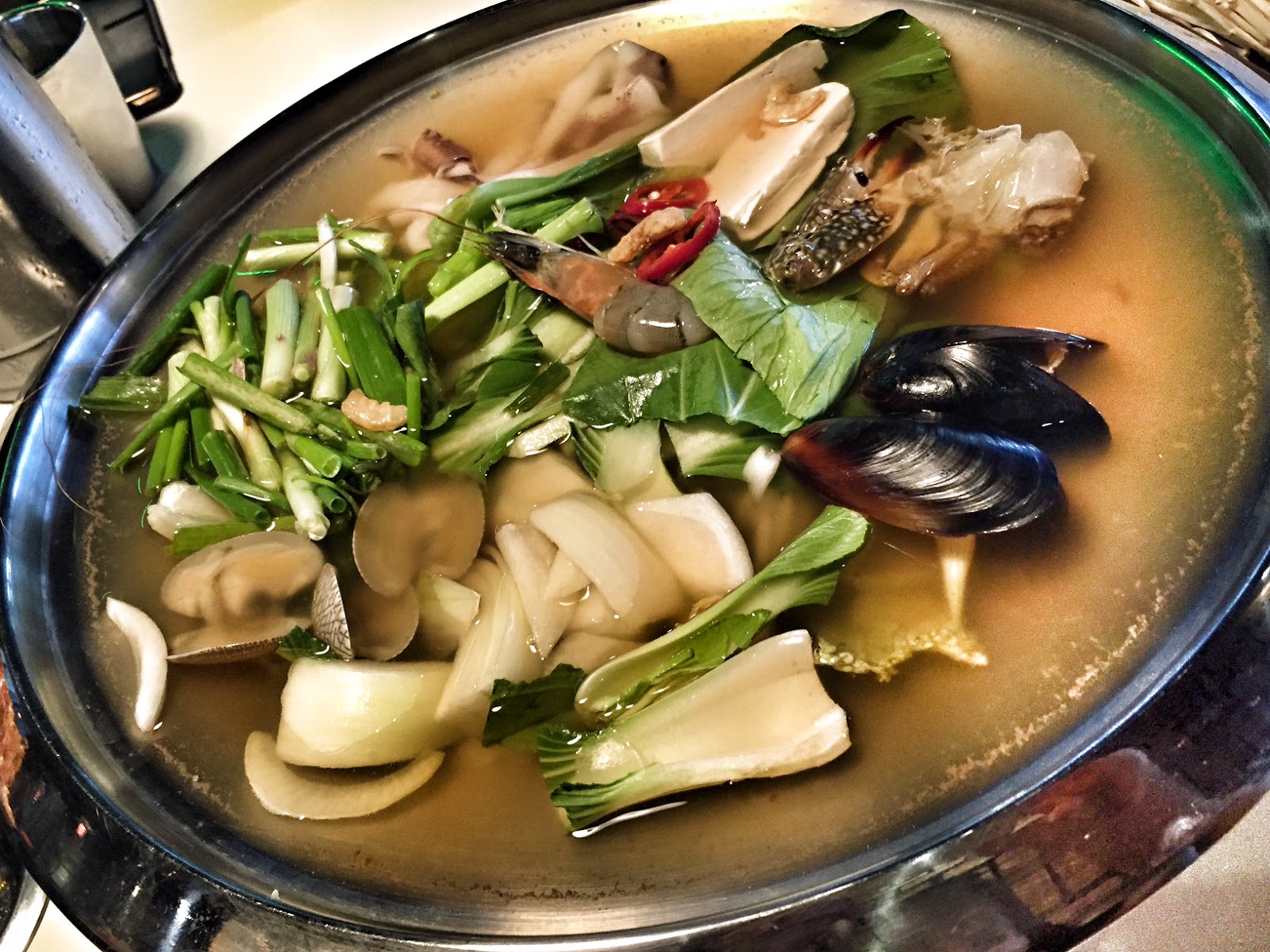 When the trio finally settled down, a long platter of fresh greens, garlics and enoki mushrooms laid upon us. Then a pot of broth with seafood - blue swimmer crab, mussels, clams, prawns, squids and loads of fresh greens were loaded in immediately.

Fab was also very curious on the dining format here, do we have the soup first? How? what now? Both of us stared at Brandon C for some answers before he declared that it's also his first time here.
-_-" 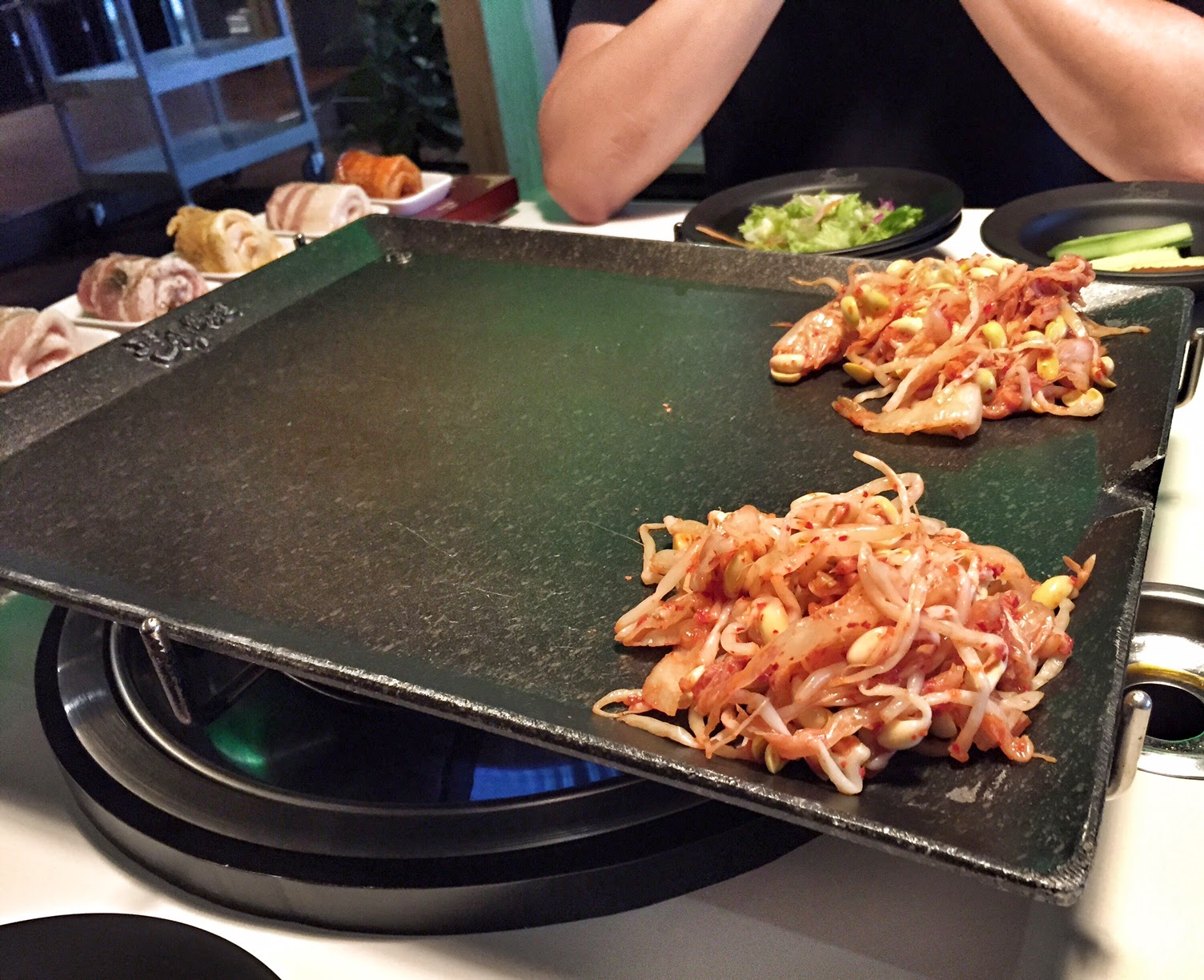 As we were deciphering what's in the pot of hot broth, out came the hot plate, and some kimchi flavoured beans sprouts were laid on. Wow the service was definitely chop-chop-fast!!! Might as well, since we were hungry and were so excited about this gathering, talking like a choo-choo-train so I guess the waiting staff here were serving according to our choo-choo-chop-chop speed. 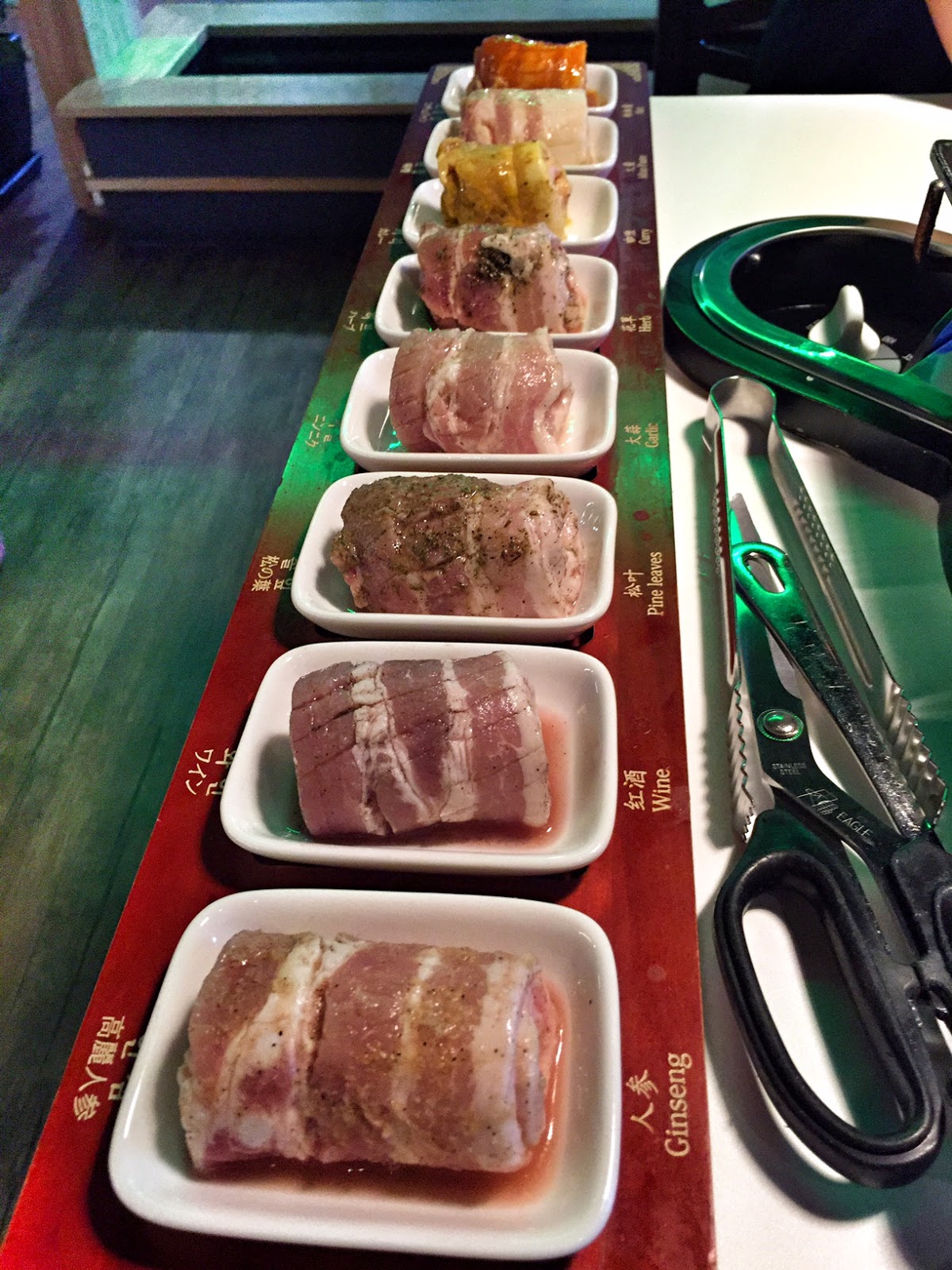 the Rainbow Pork Bellow Platter. Generous thick slices of pork belly marinated in different ingredients. So we have: 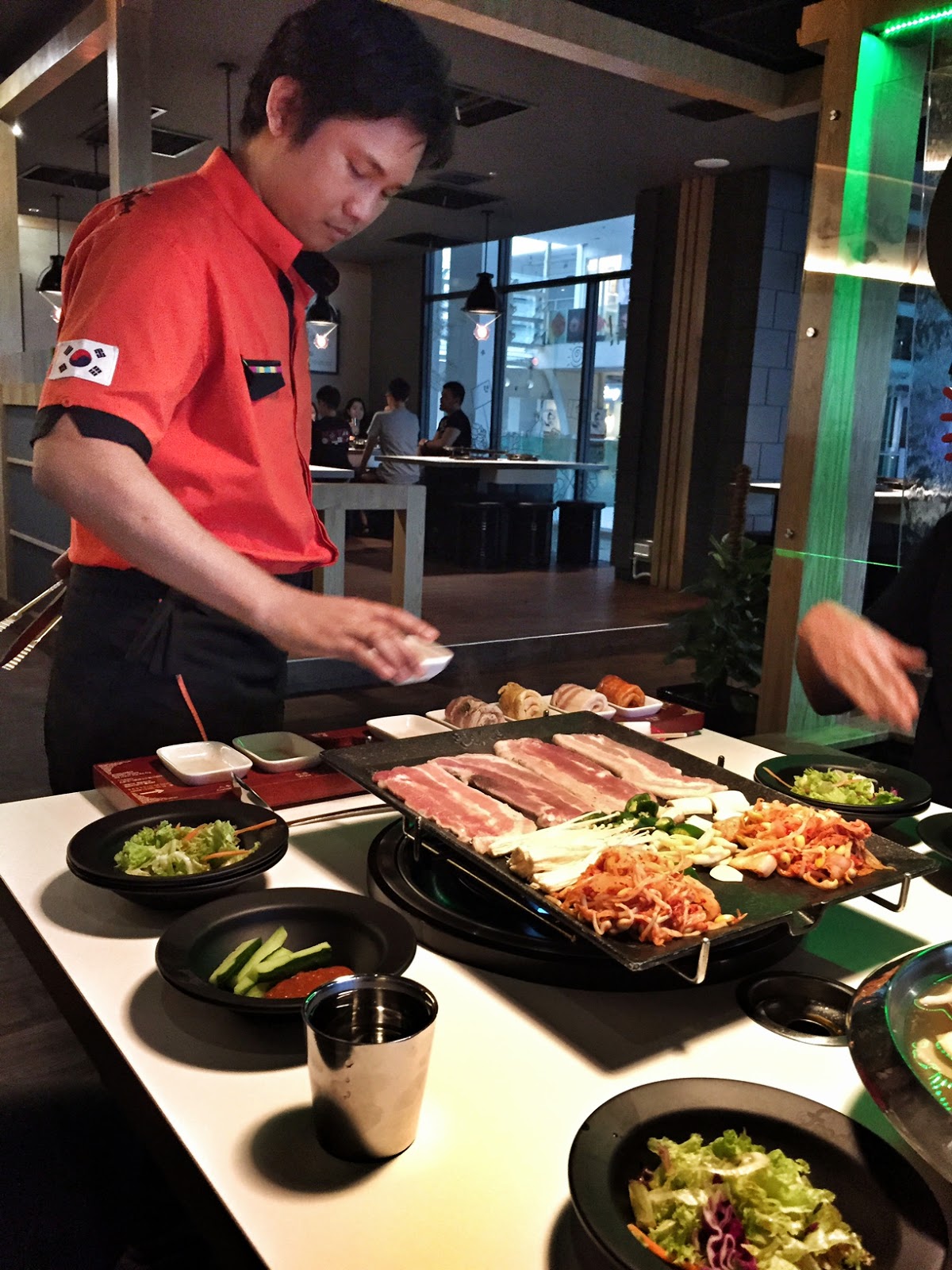 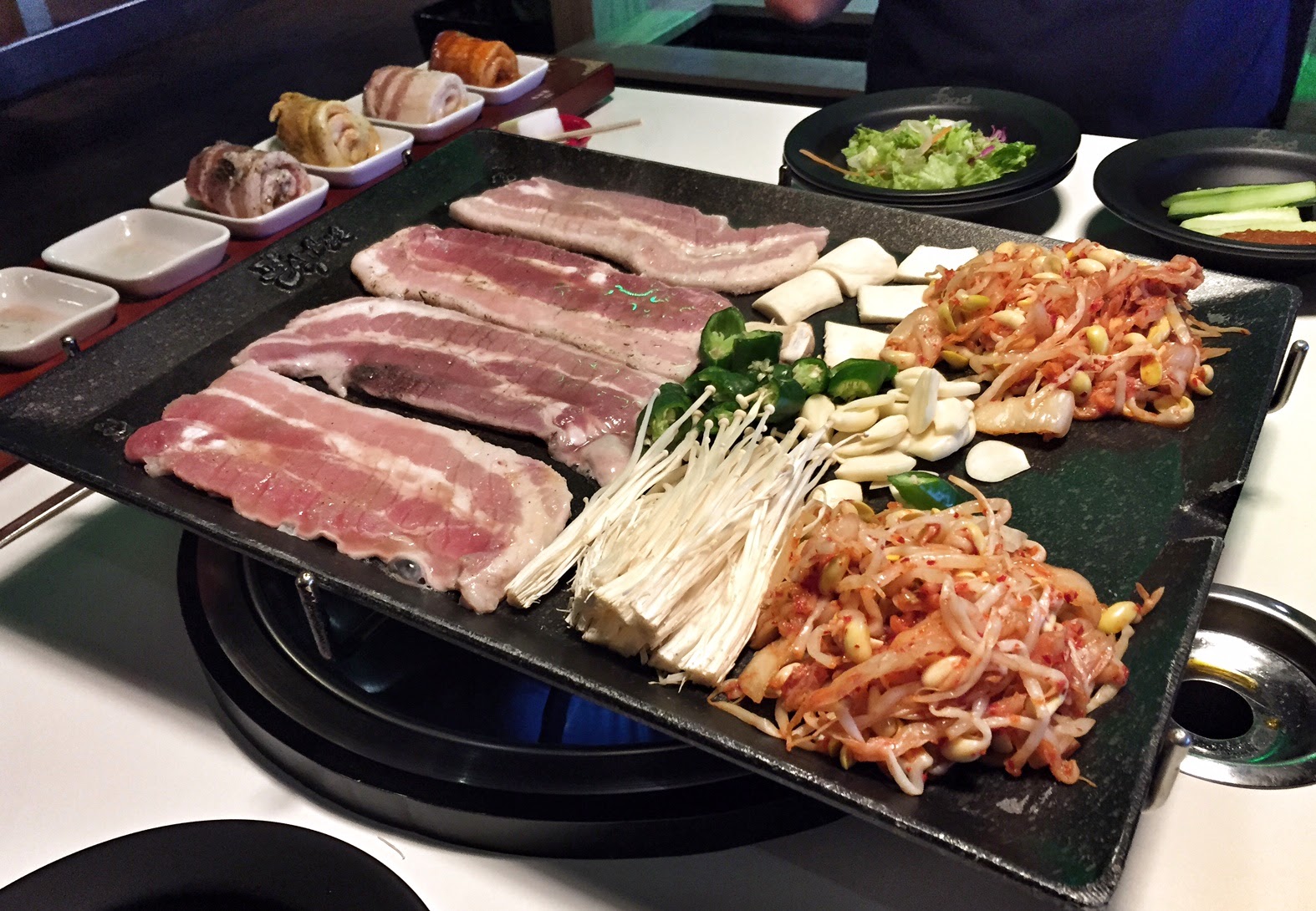 Absolutely a bliss to have someone cooking for us!!!! coz we won't know what to put in and where and how. Look at how he neatly merchandise all the ingredients. The fat fr the juicy pork belly will flow down the hot plate onto the garlic, mushrooms, chillis and finally the kimchi beans sprouts. The plate is designed for these, with a catchment area at the other end. Check out the hole on the right. All the fats/oils will dripped down after goin through the "filtering" process.....filtered by the vege. LOL 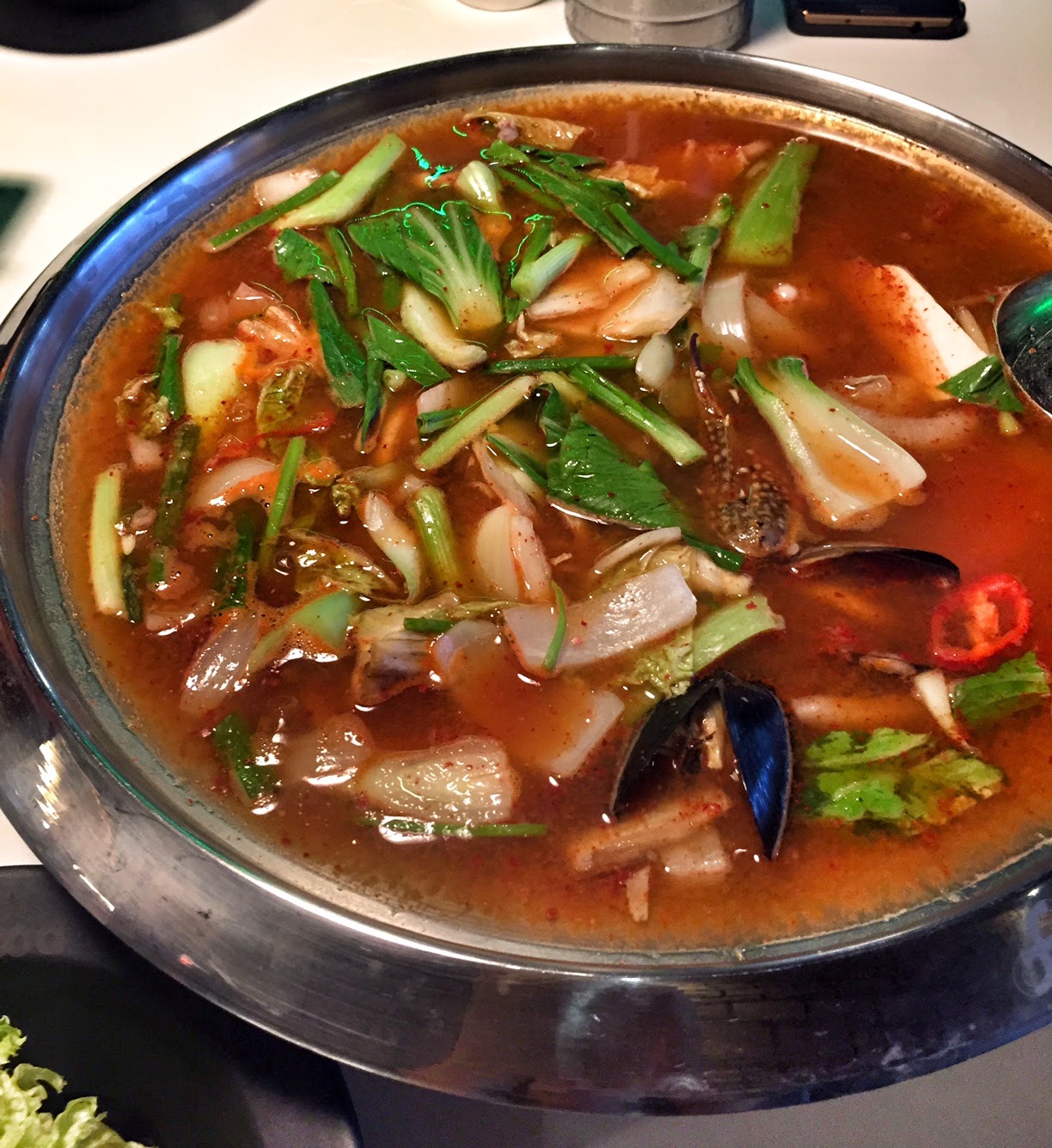 Then he added something to the hot broth and it looked so yummy already, I was impatient and tried to scoop some food out but he stopped me. Signalling that it's not ready yet!!! Like a small gal caught with ice creams when she's not allowed to have it....I smiled sheepishly and laid the laddle back down.

Brandon C: "Be patient, there have some cucumber first~~~" 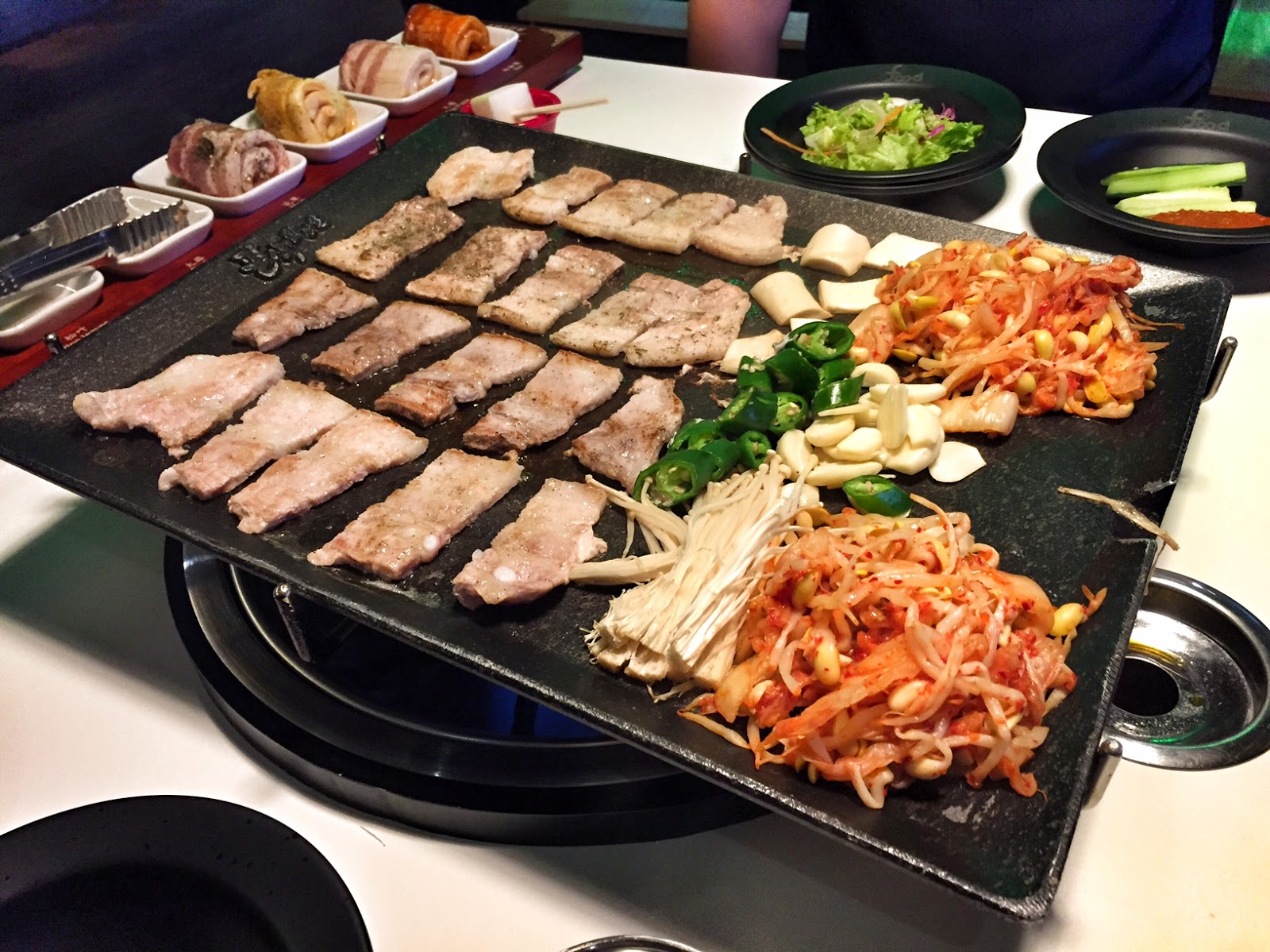 With a pair of sharp scissors, the staff sliced the pork belly into equal portion, inverted it to be cooked on the other side until it's caramelized~~~~

Isn't it torturing to watch this???? GAH!!! I guess like delayed gratification, when you finally have it, it would be sooooo good. 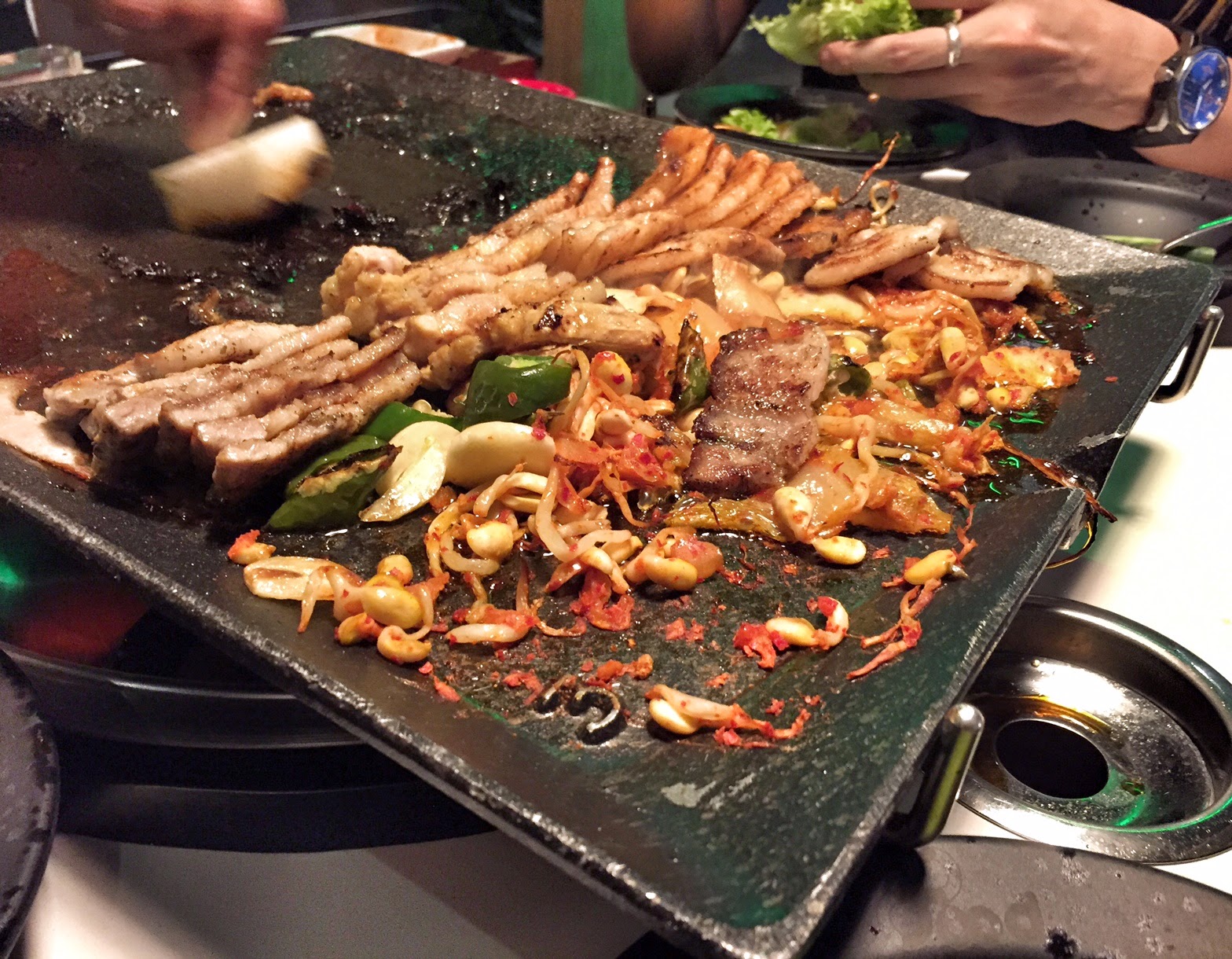 OMG look at that!!! then it's re-arranged this way to make space for the next batch to be bbq. The staff cleaned the hot plate with a piece of Jicama/sengkuang.

The pork belly was soooo yumzzzz. Looking at this pic again made me crave for korean BBQ....especially when you don't have to cook them urself makes it even better WUAHAHAHAHAHA. 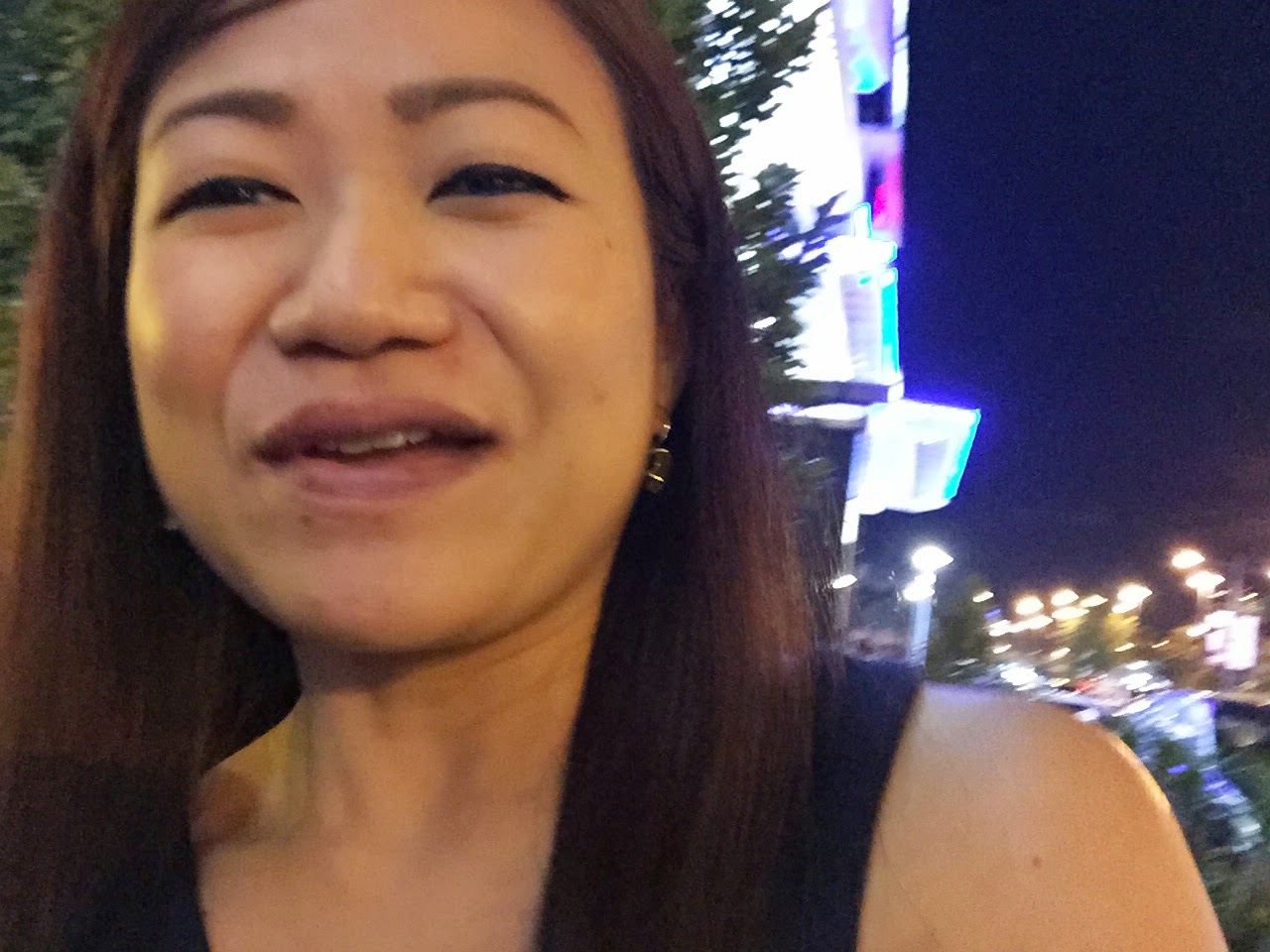 Why was Monkey so eppy about?
Apart from that the dinner was so yummy and we ate until we couldn't take any food no more, plus Brandon C was buying Fab and Monkey some nice beer at one of the bar in Scotts Square. 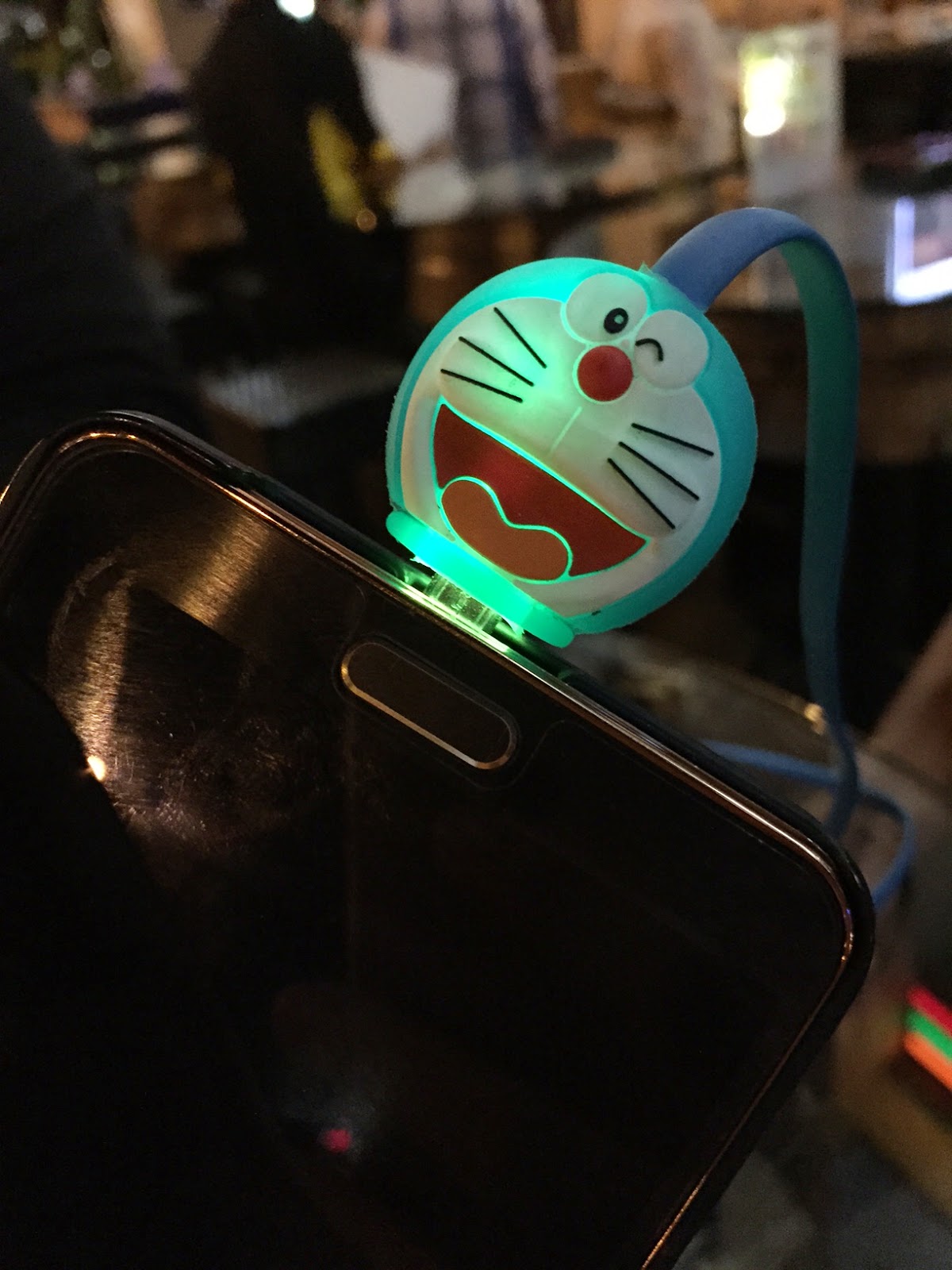 Monkey was so delighted with this!!!!! I want!!!! where to get????
Brandon C: "Pasar Malam la, I'll get for you."
speaking of pasar malam, I haven't been to one in ages. Any recommendation? 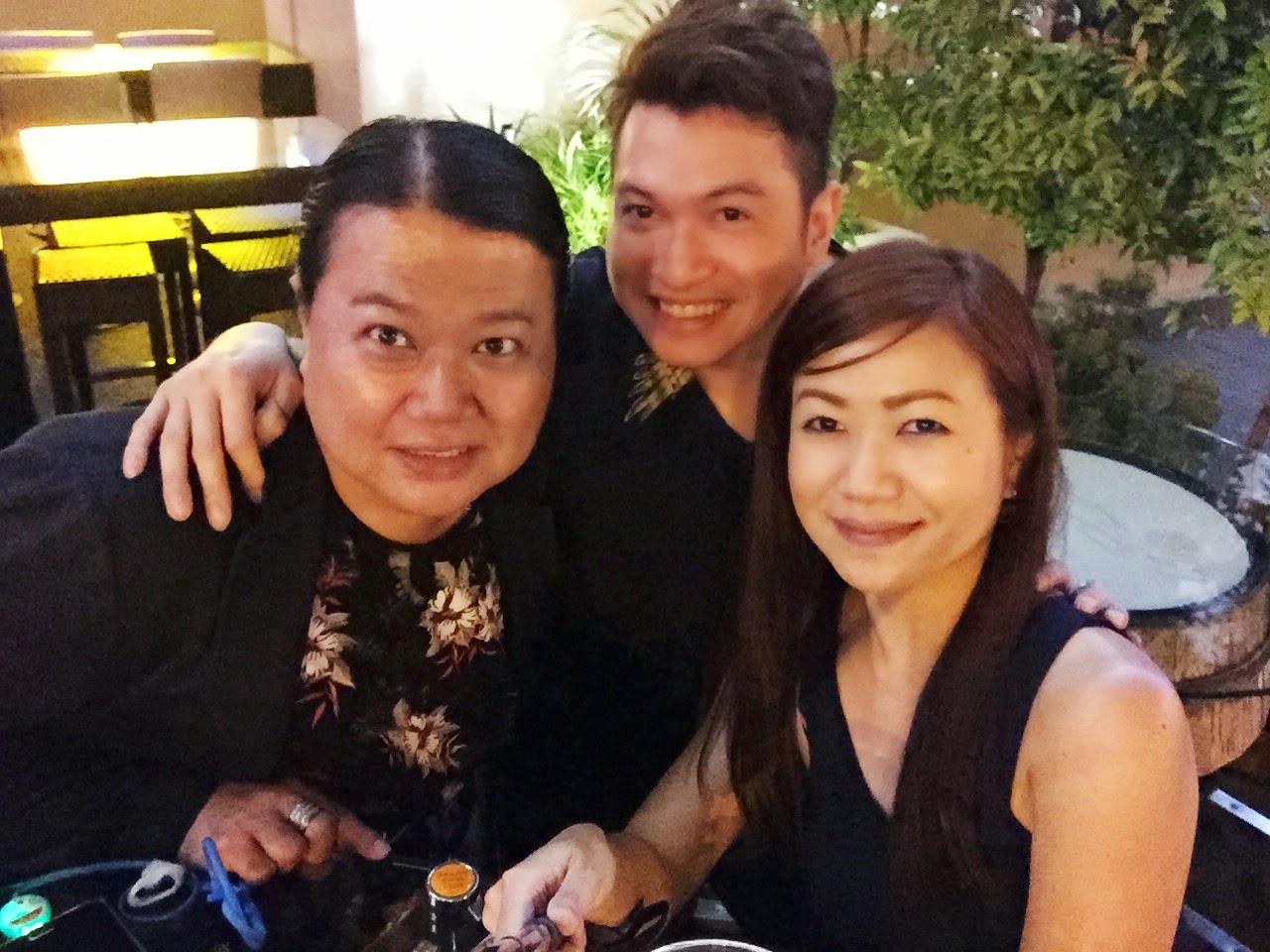 Wefie of Fab, Brandon C and Monkey
Tiga Sekawan alwiz :)))
Great catchup my dear friends, alwiz a delight to see both of you. Looking forward to the next and I hope it's not like 6 months later? hehehehehe