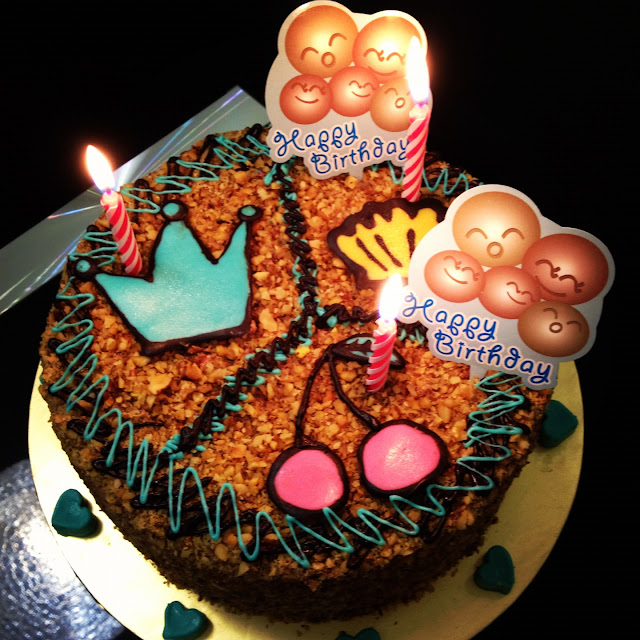 Notice that the cake was divided into 3?
the yellow top with the shape of Shell was meant for Shell Shell's Birthday
the turquoise crown was for the New Crown Prince Jae
and 2 cute pink cherries are for me 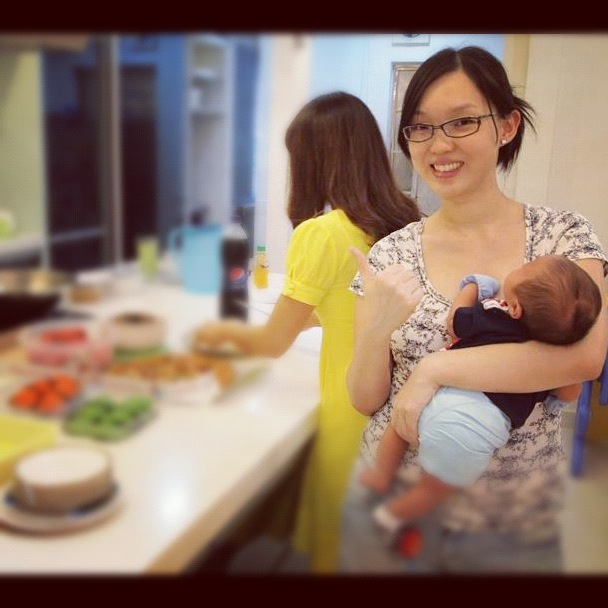 Mee Mee and her one month old Crown Prince Jae
it ain't easy for a mommy to take care of her 2 princes, household plus throwing a party for her roomies *plus she has got a great career*
minus the confinement lady...yeah she fired her confinement lady after 2 lousy weeks
>.<
I admired the way she handled everything so delicately
having babies are really stressful -_-" sigh.....

since Mee Mee is a successful lady, she empowered Monkey to merchandise her food
and prepare setup for dinner :P 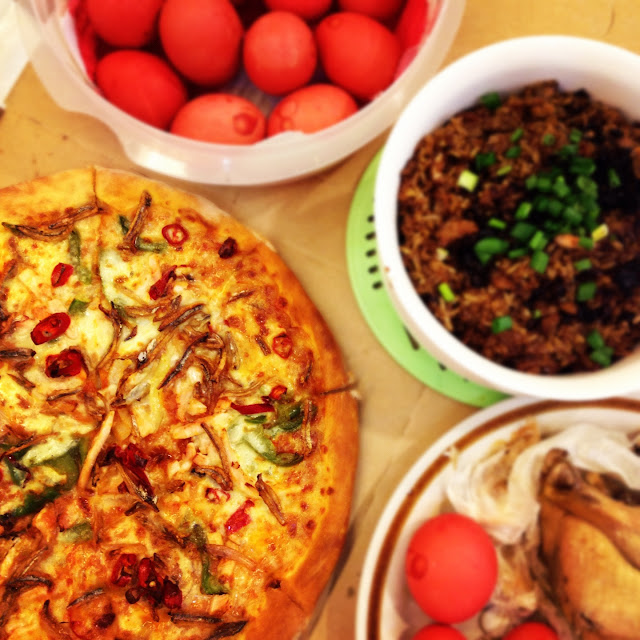 WOW wat a feast :))))))))
we were told not to bring anything
she made the red colored eggs *a must have for baby Full Moon*
sticky glutinous rice was made by MIL, got some really yummy salt baked chicken from Ipoh *yup she's from Ipoh*
ordered some pizzas *there's a new ikan bilis pizza on Domino's menu*
and the usual must have for full moon party aka "ang ku kueh" 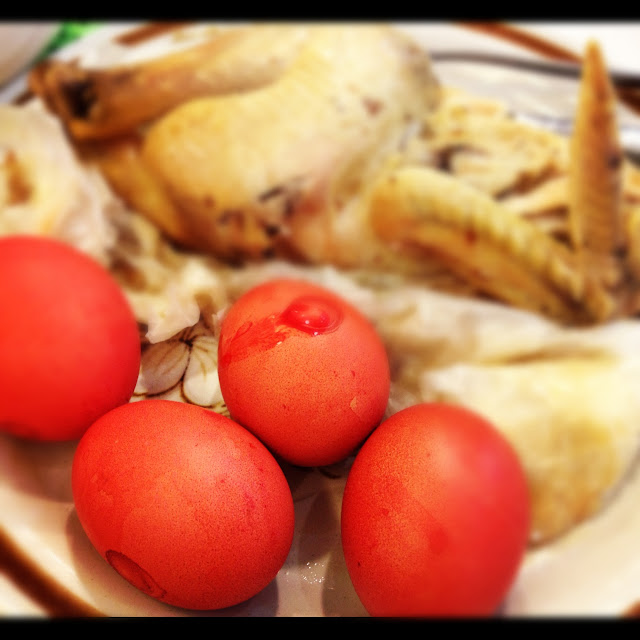 I didn't take the red eggs coz am not a fan of hard boiled eggs
but the salt baked chicken with herbs from Ipoh was so yummy I had so much
:D heeeeeeeeeeeeeee not shy :P 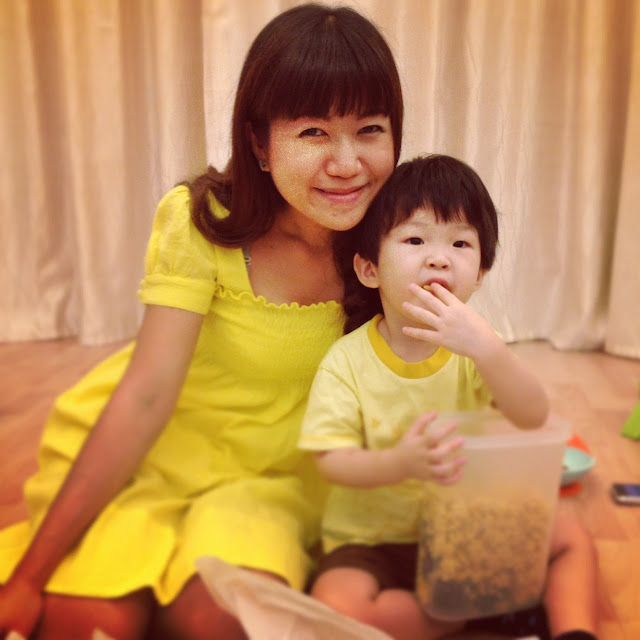 When Rae Rae woke up I got to cam-whored with him
plus he's wearing YELLOW too :))))))))))
he's looking so like daddy 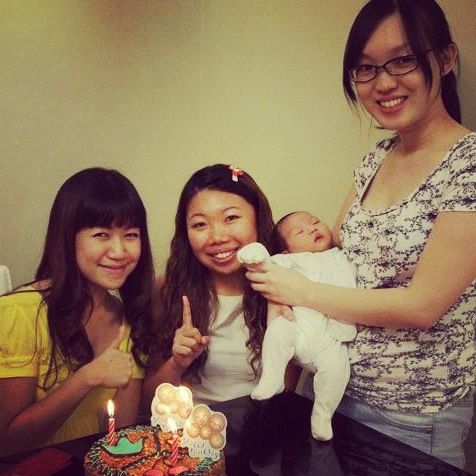 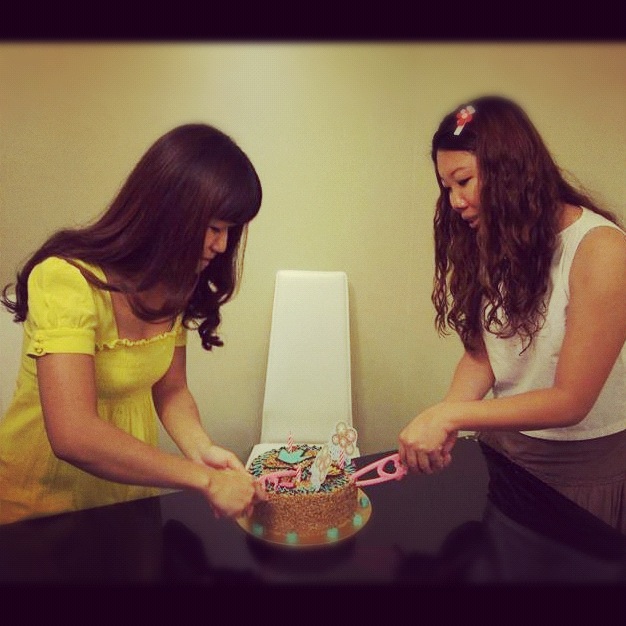 we were fighting who gets to cut which part since there's 3 different section of the cake
it's a Walnut Cappucino Torte
well every birthday cake needs to be destroyed after the song has been sung and the candles have been blown rite??
soooo HAAIII--YEAAAKKK!!!!
chop chop chop chop 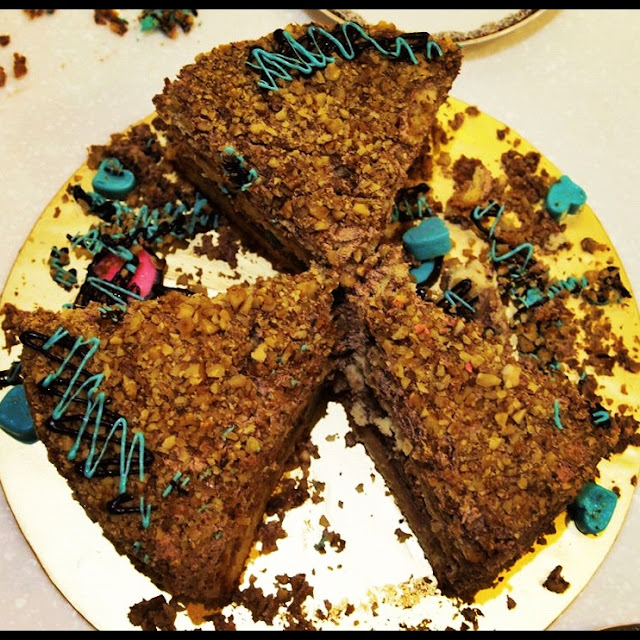 and finally it became a Radioactive Nuke Cake
:P
sorry it was my fault but my roomies were the one giving me aka the cutter directions

then I was asking them, how do u make a cake with different flavour in such way?
later we found out the entire cake was made up of 3 flavours in different layers
-_-
hence this cake is now officially called Nuke Cake :P

the greatest gift from God to us is that we can do anything we put our minds to!! and we can multitask too... kekeke :P

I don't think I ever had a much fun watching a cake being cut as I did that day! :D

the cake is so cute. So thoughtful! where to get that cake??

Wow, she is indeed a super mom!~

Hi Melissa: the cake was made by a "homemade-industry" hehehehe, if u are interested I will find out more info for u?