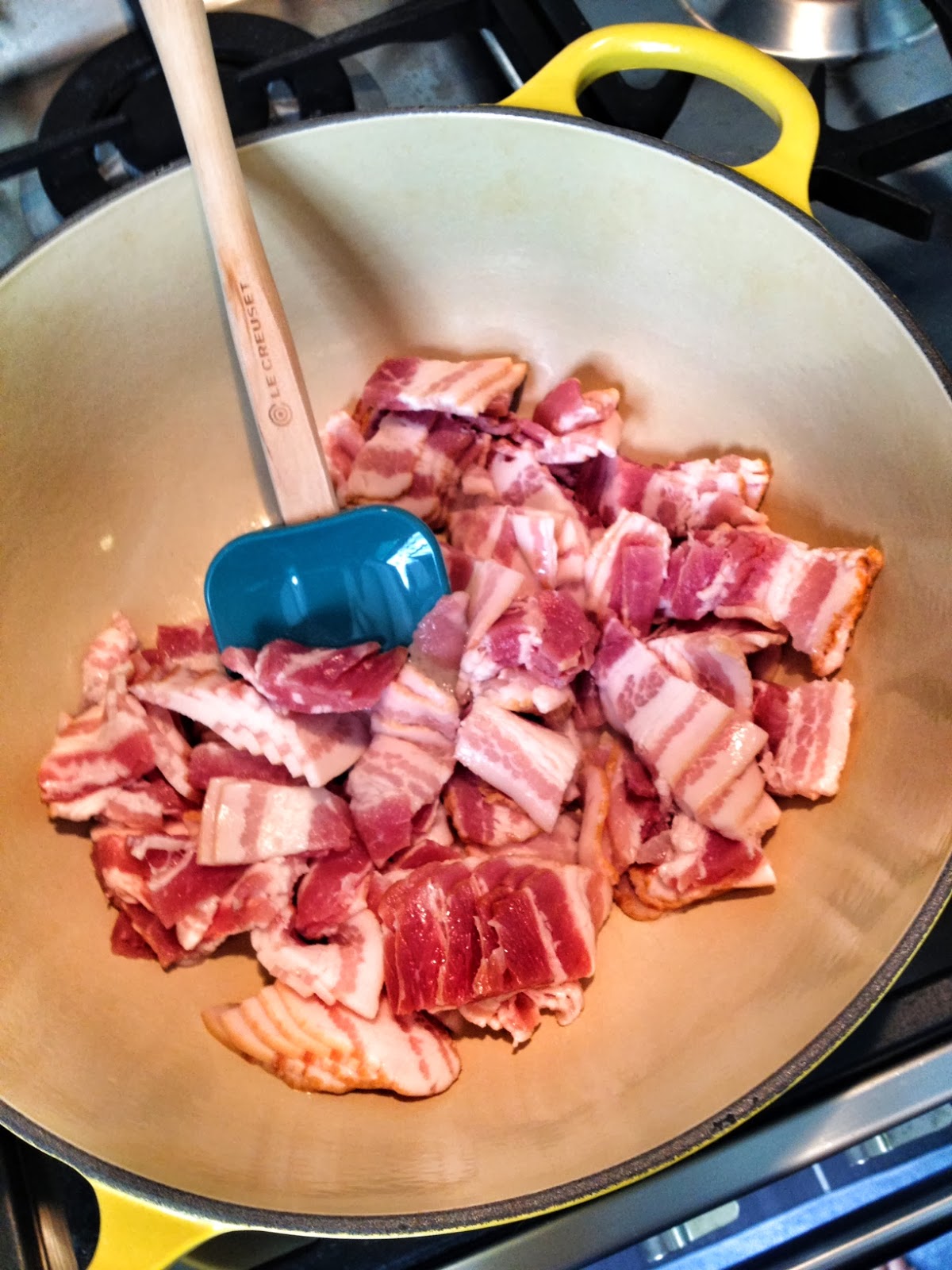 I don't know wat prompt me to attempt this dog treats....not just any dog treats but one from Thomas Keller's baking book - Bouchon Bakery. Having not much experience in baking, I proceeded with the ingredients, snapped a pic of the ingredients list and went out shopping.

First of all sautee about 453gm of bacon slices which have been cut into 1 inch wide pieces... U just need to do this at medium fire and have some patience. While it's cooking, go and cut some chicken livers. 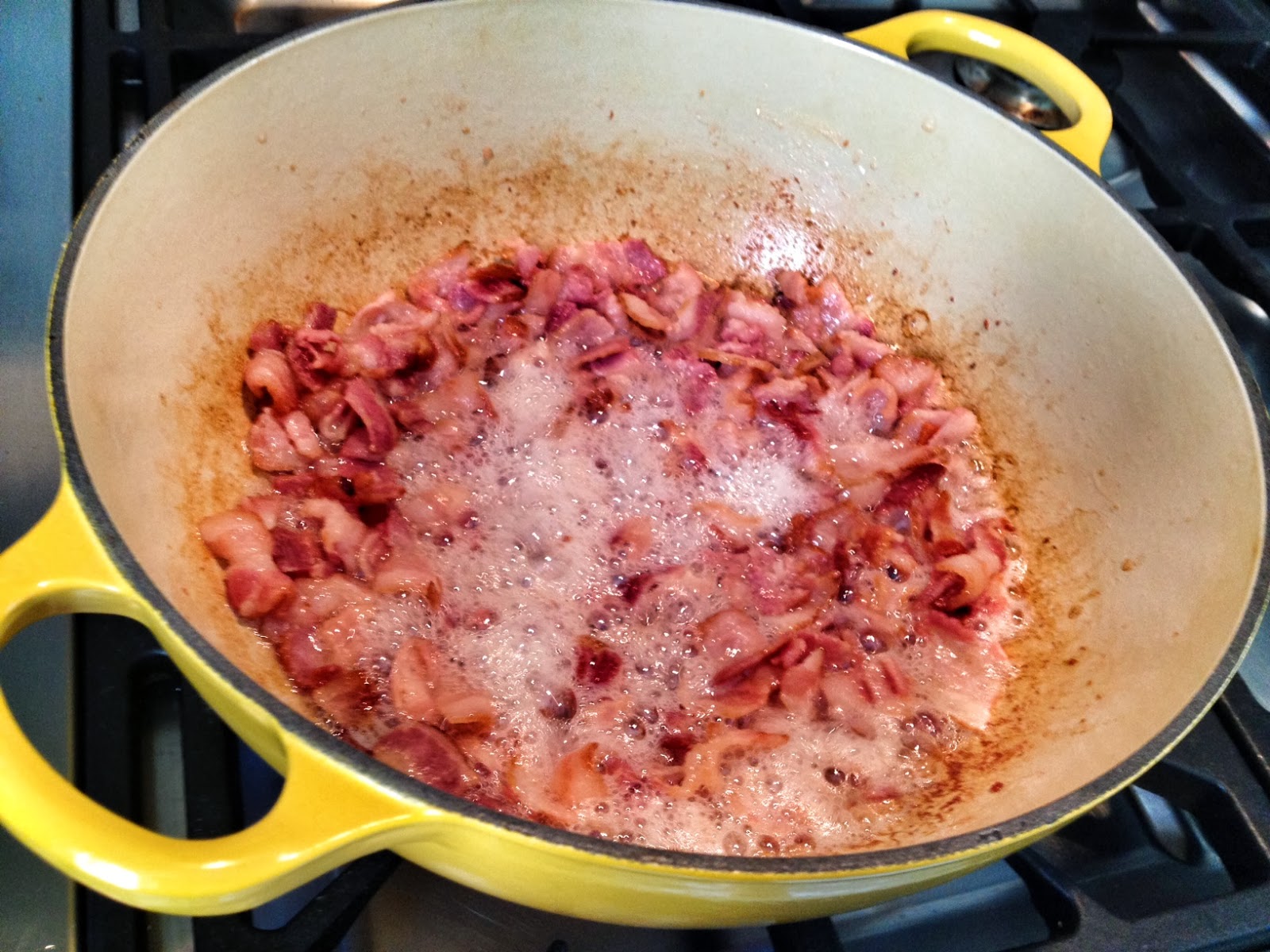 I see that those bacon slices are being nicely sautee there. So much of fats came outta it, and the smell was so yummy and good. Can't believe this gonna end up being parts of dog treats. 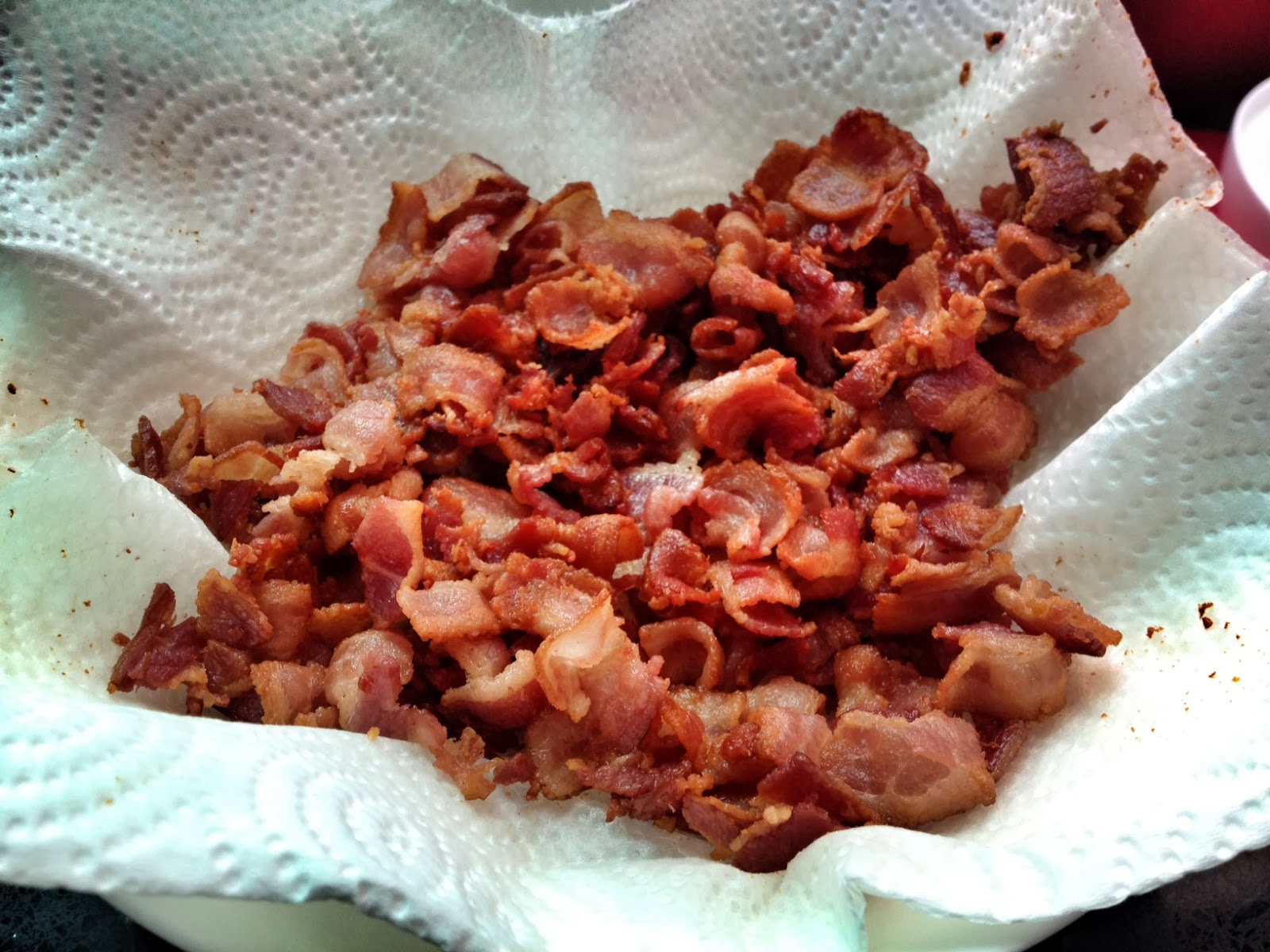 Wahhhhh I couldn't help but stole a few pieces...oh well when u are cooking u need to TEST TEST first right? And the taste test came out fine...crispy and crunchy and definitely not oily at all because all of the oil has been rendered out. 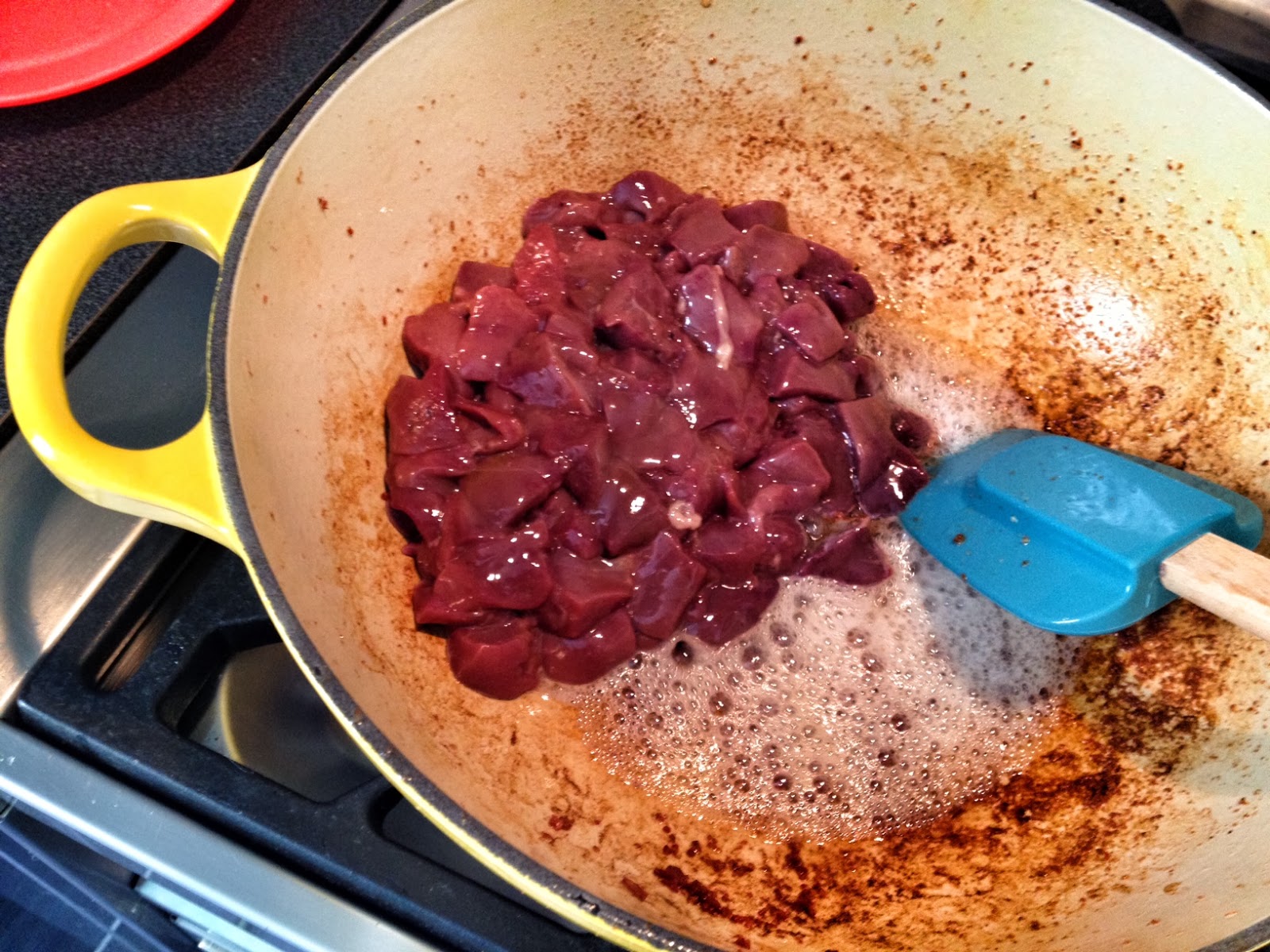 While sautee-ing the bacon slices, I had been busy cutting the chicken livers into half an inch pieces. I don't eat chicken livers, and preparing them was no fun either....the texture, the smell...oh yucks!!!!

So u'll need about 370gm of these....
throw away most of the oil rendered from the bacon and leave only a bit for the livers. 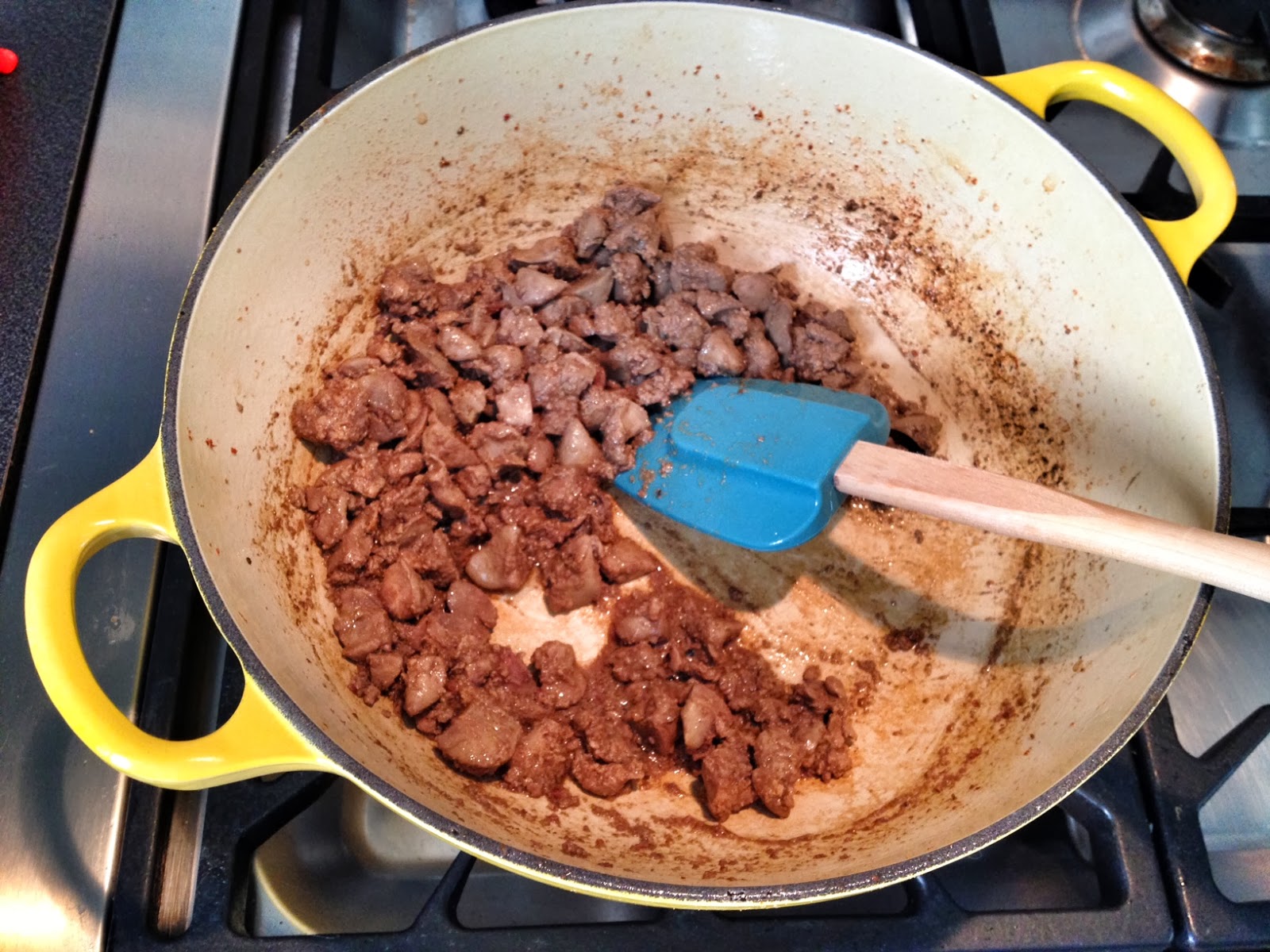 So u fry them for about 8 minutes, and continuously smashing the livers with your spatula. Now I understand why I don't eat livers...the smell is something that I don't like. ARGHHHH 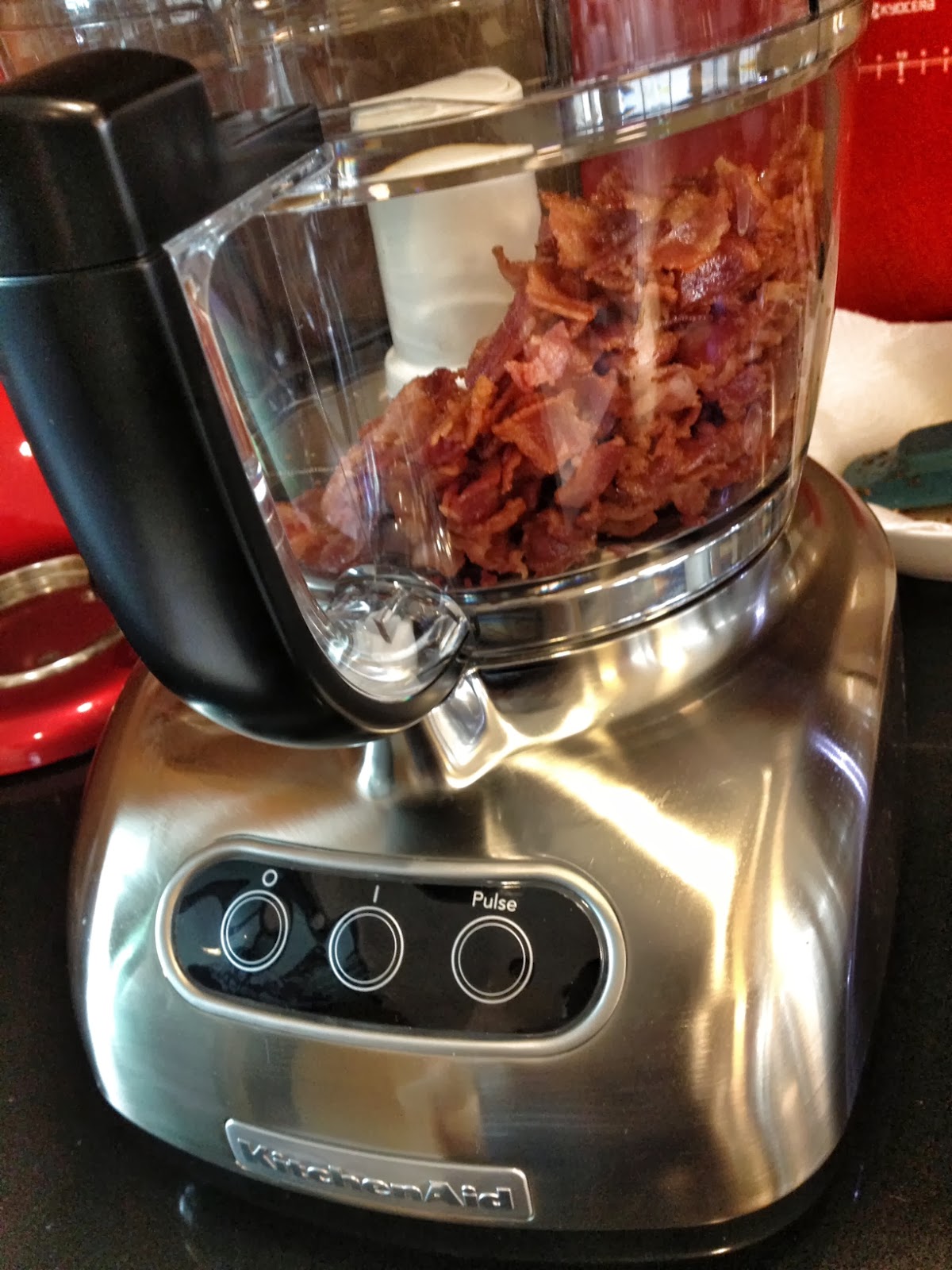 Next you'll need to blitz the fried bacon slices....
I was like O.O!!! another machine to clean...arghhhhhh....why oh why didn't I read the full instructions before attempting this...but there's no turning back. I had to go on with it.

so after pulsing the bacon pieces for a bit, add in the chicken livers and 130gm of fine cornmeal... 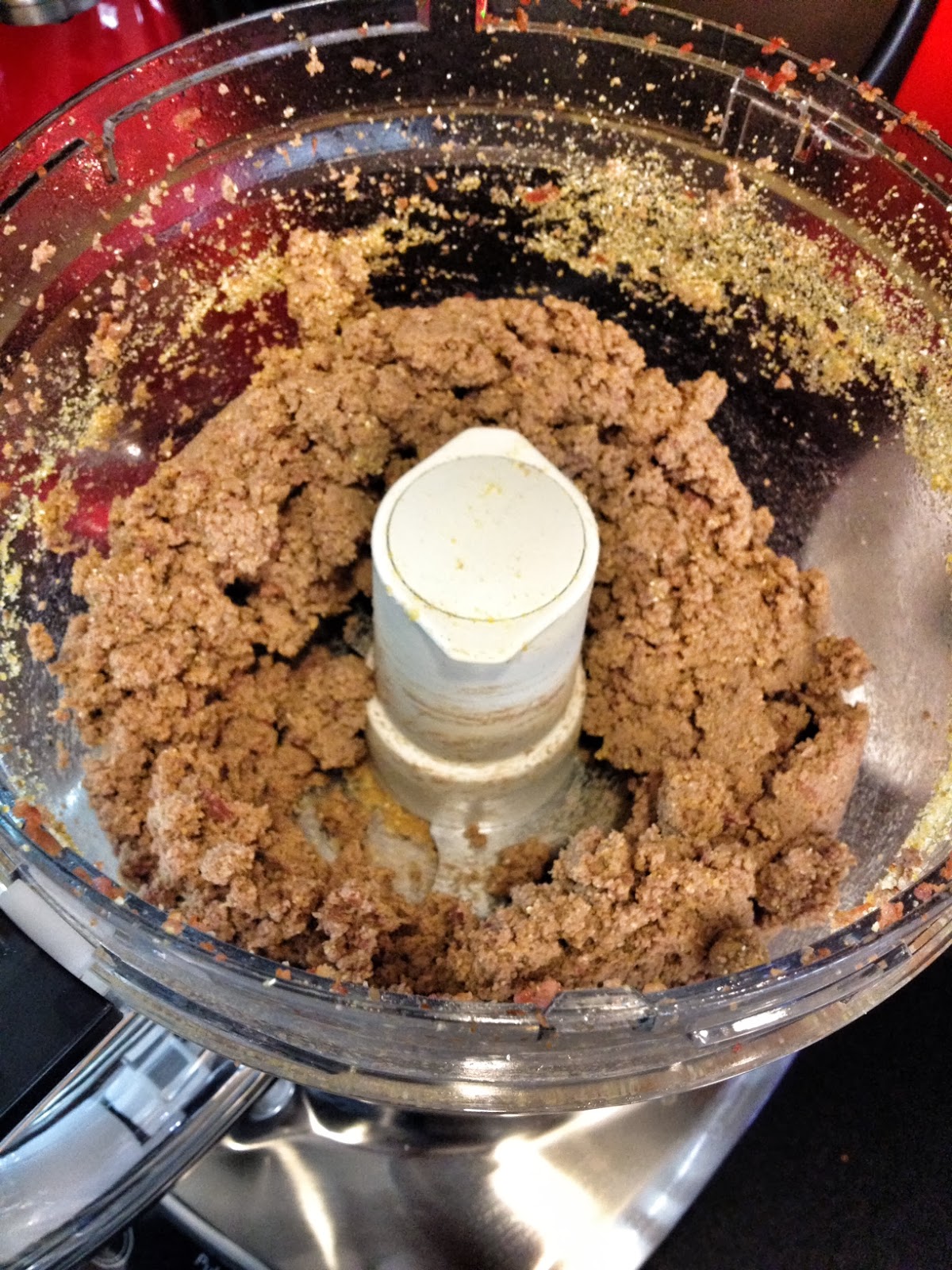 Ohhhhh it looked and smelled like DOG GOOD at this juncture.....
I was rather pleased bcoz it didn't turn out to look/smell like something else...bahahahaha 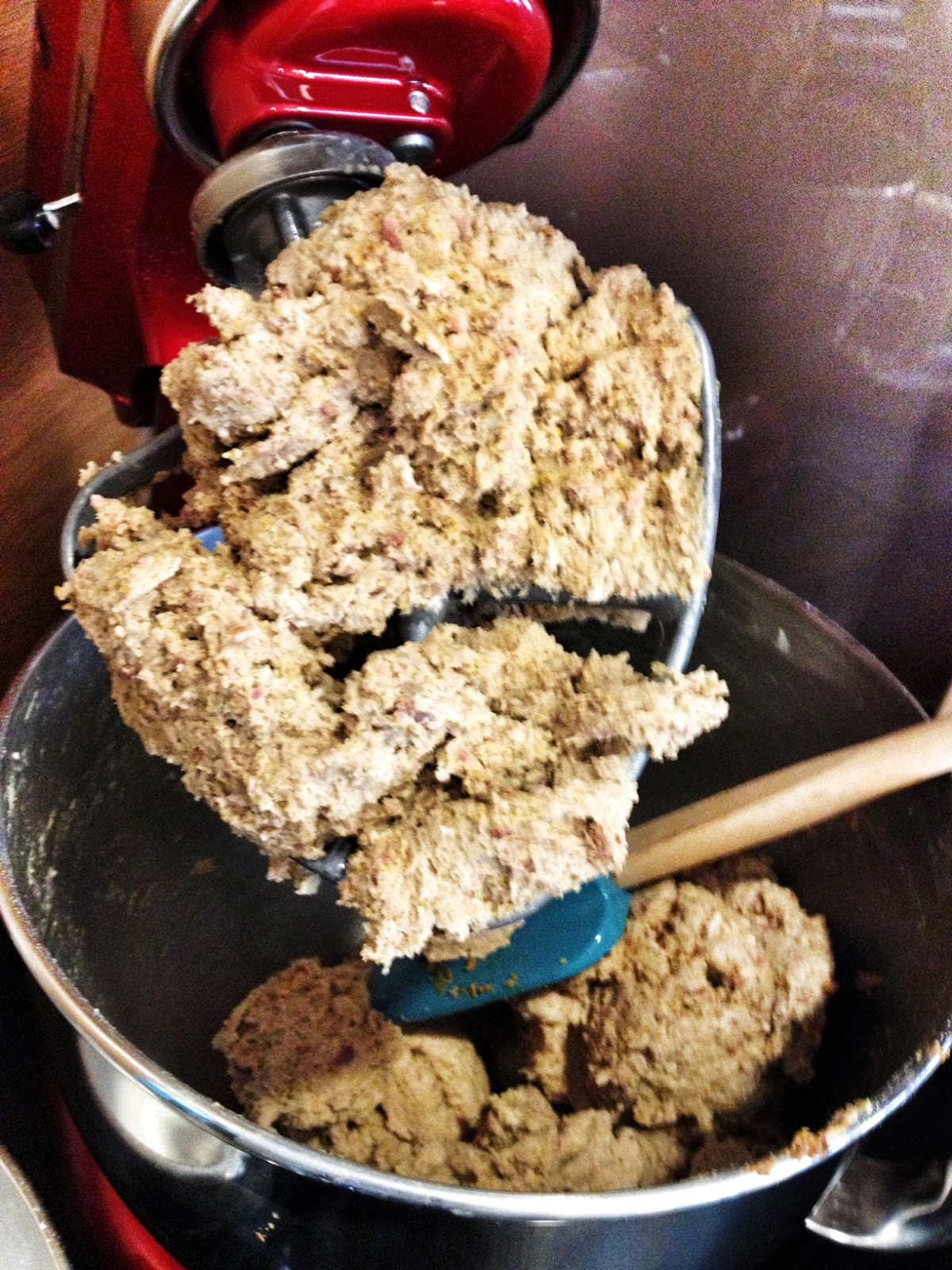 Next use your mixer with with a fitted paddle to mix the above with 450gm of all purpose flour in 3 batches with 235gm of chicken stocks. Just inter-add the flour and chicken stock 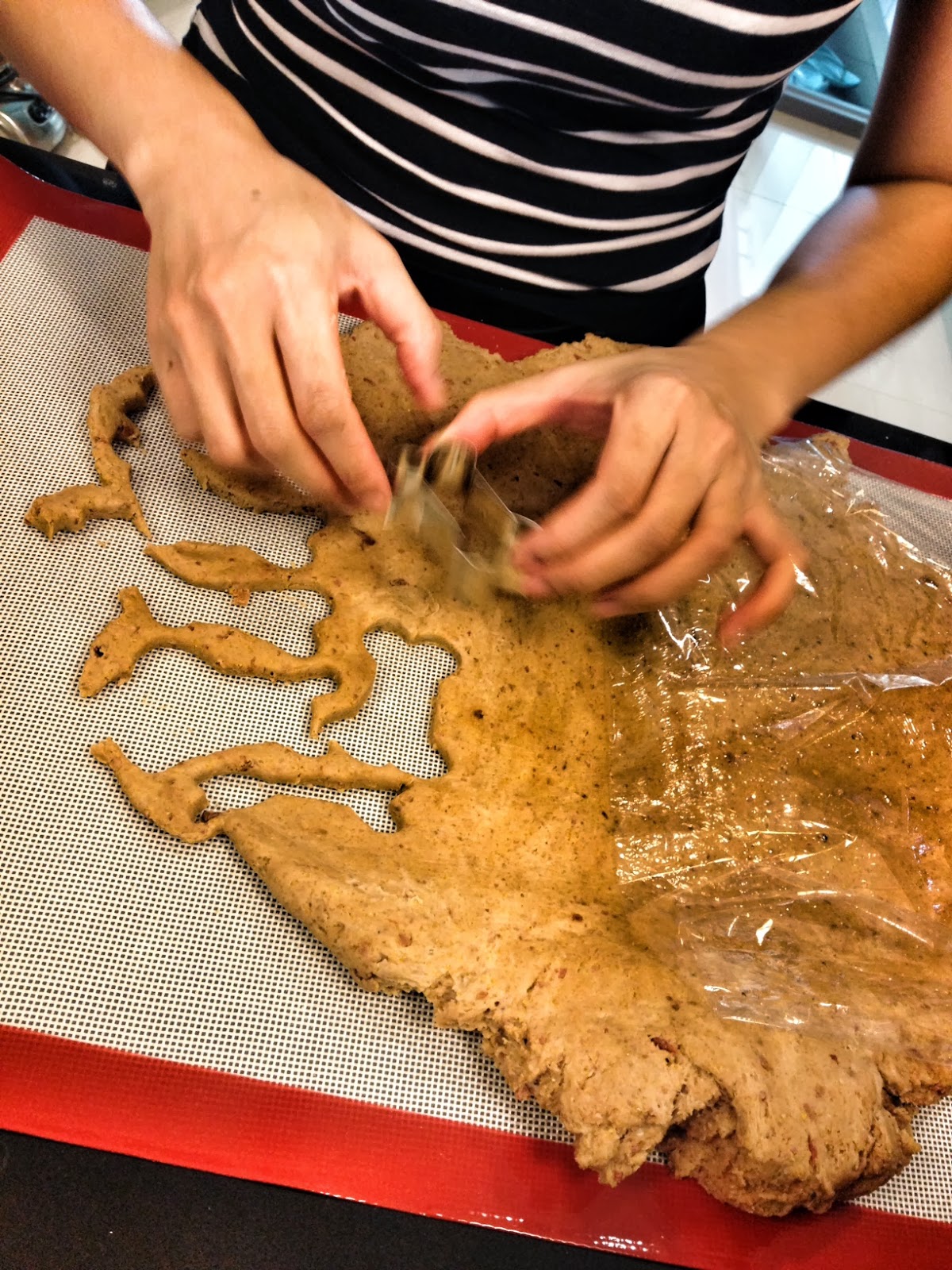 Next roll it up to your desired thickness. Because of the texture and stickiness, u'll need a silpat at the bottom and a cling wrap at the top.... 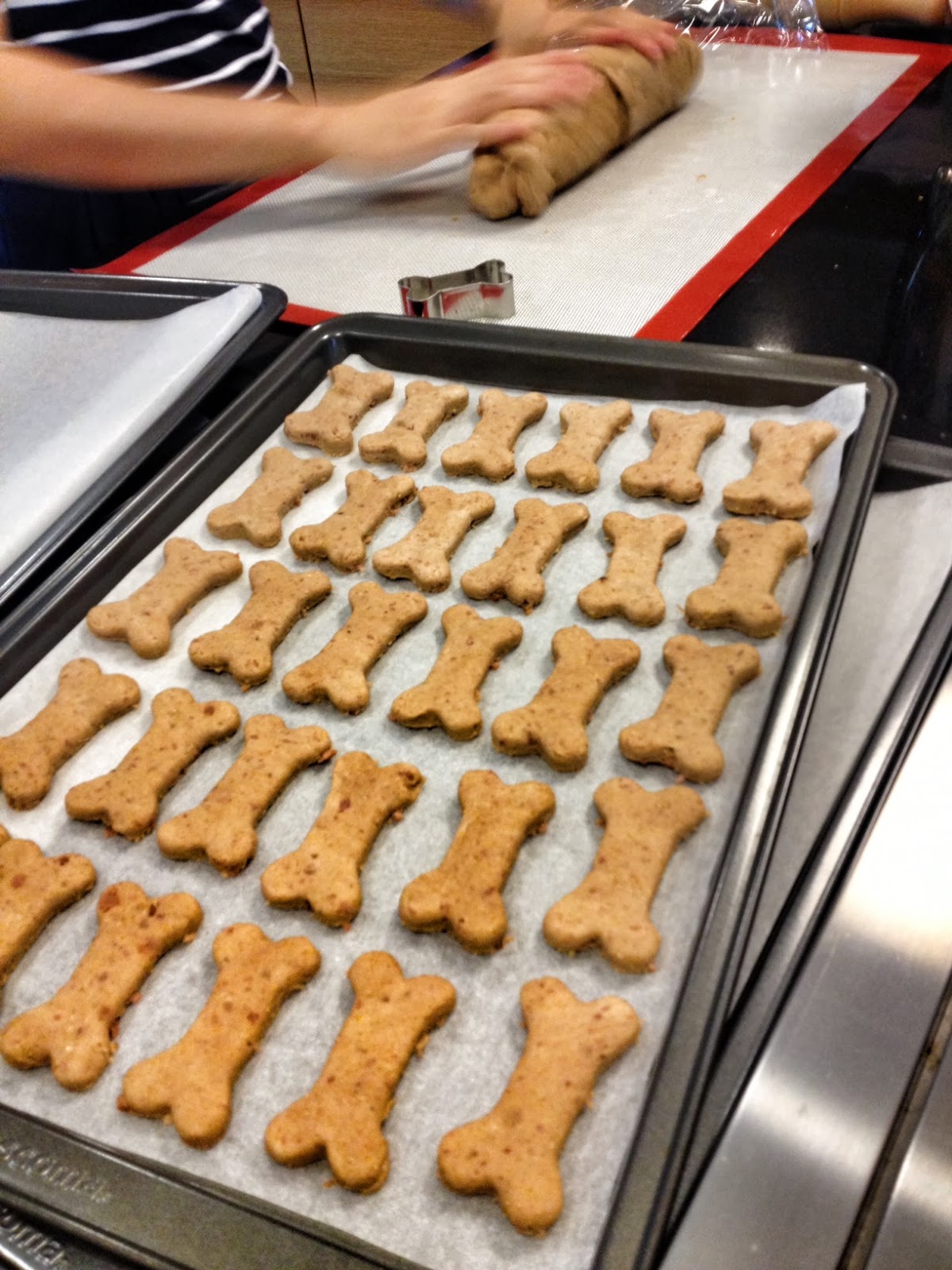 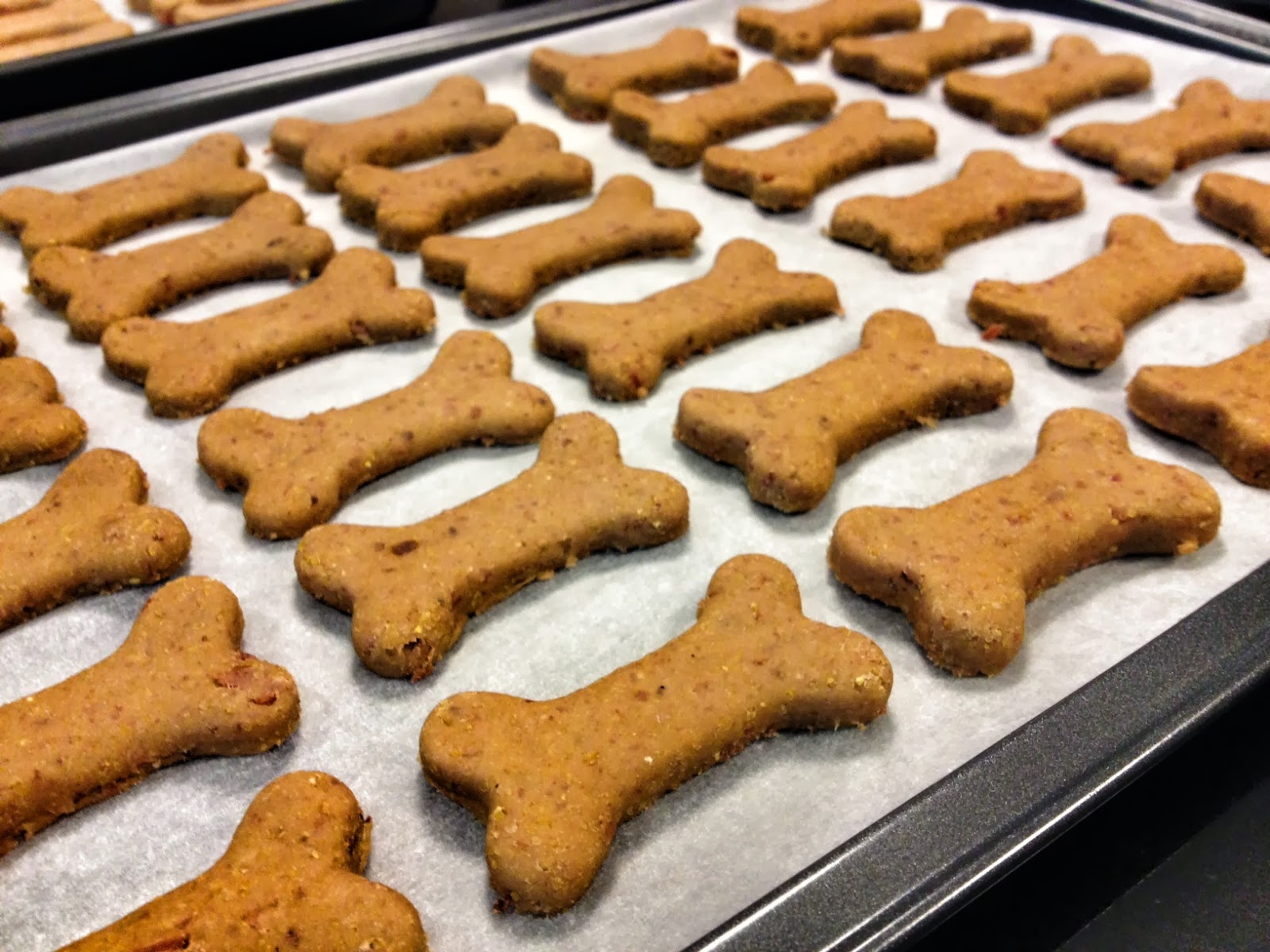 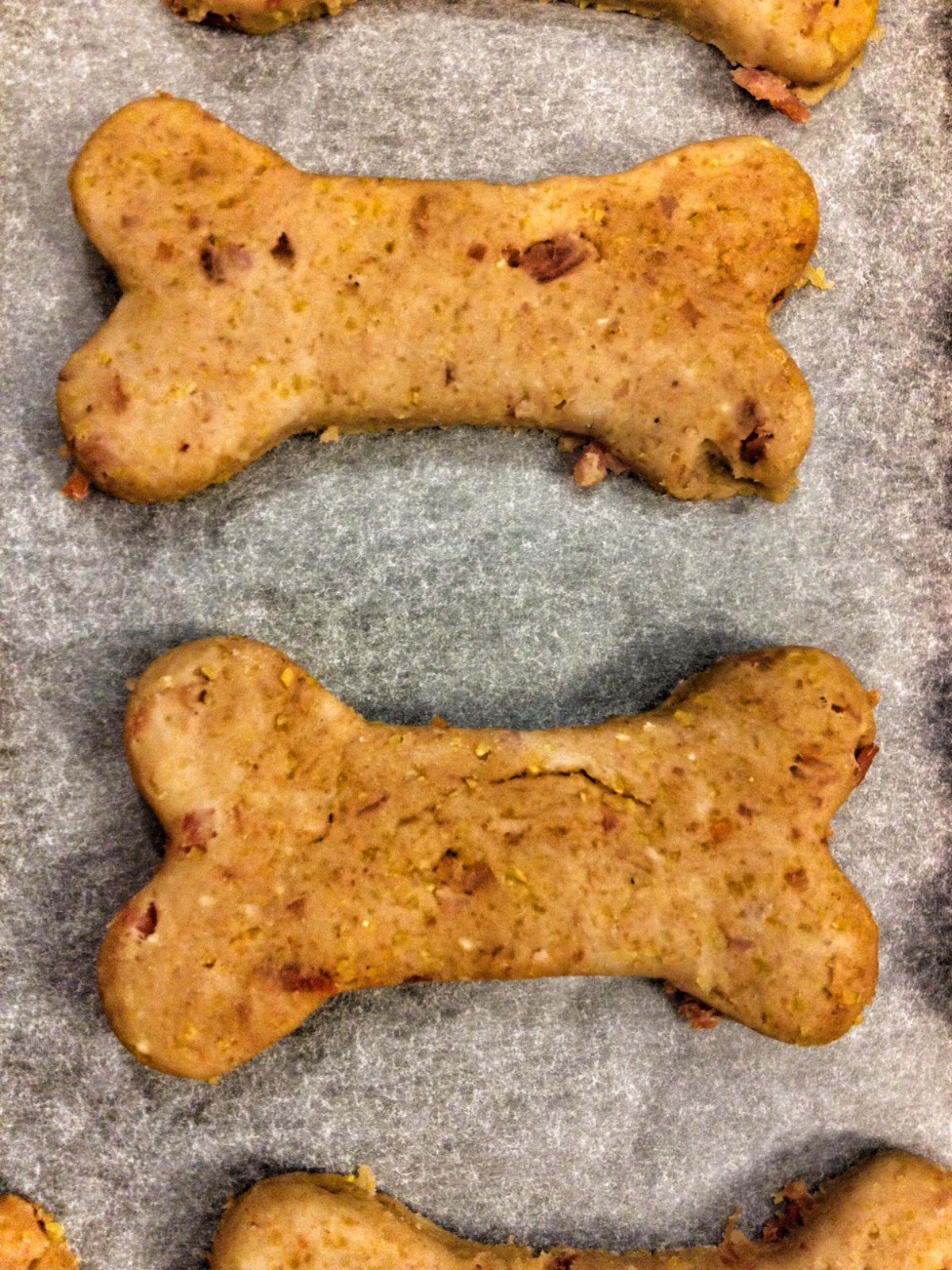 JS was busy sniffing around my stuffs and said...he could see the bacon pieces....he even complained the whole house smell of chicken liver 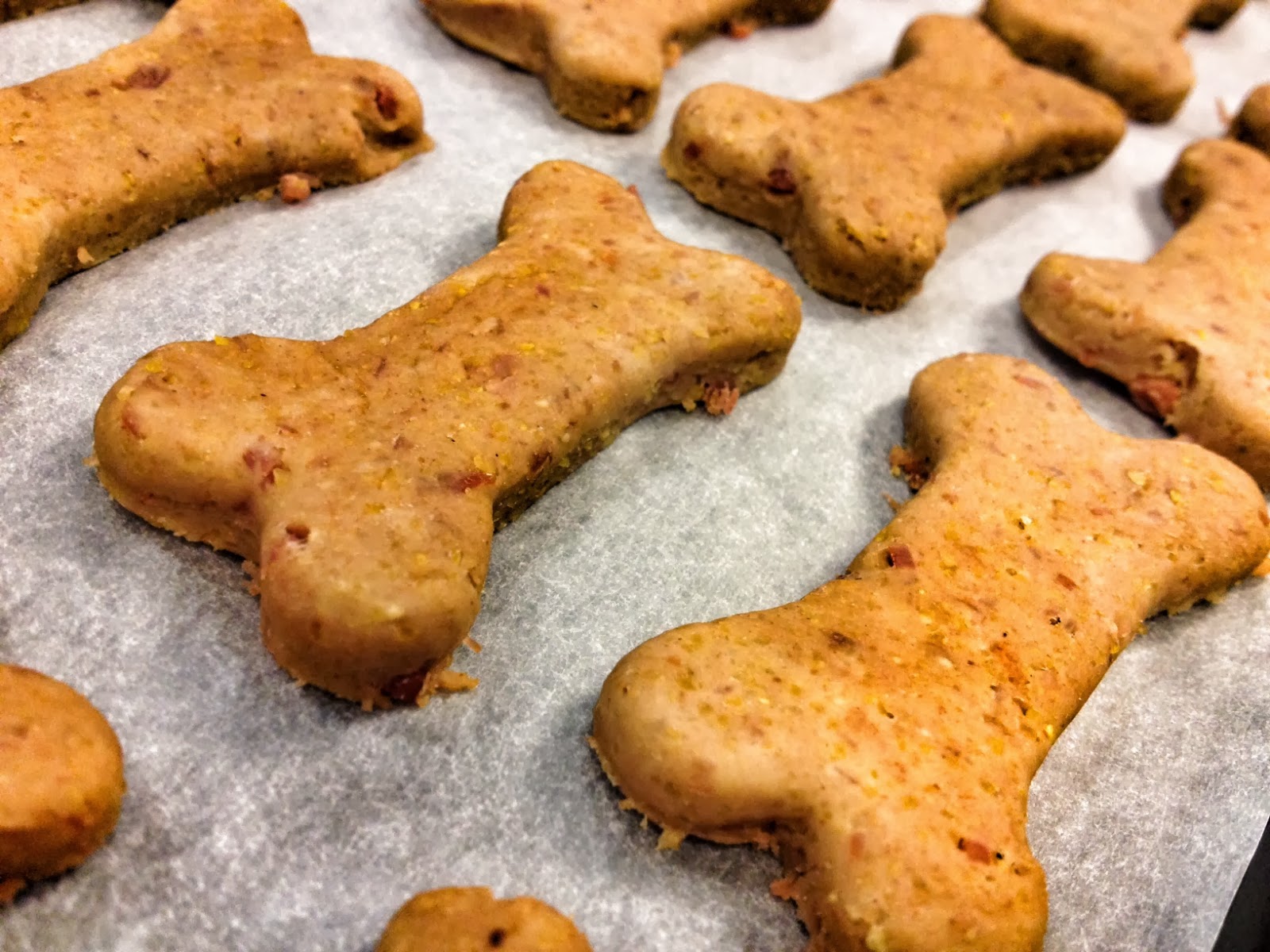 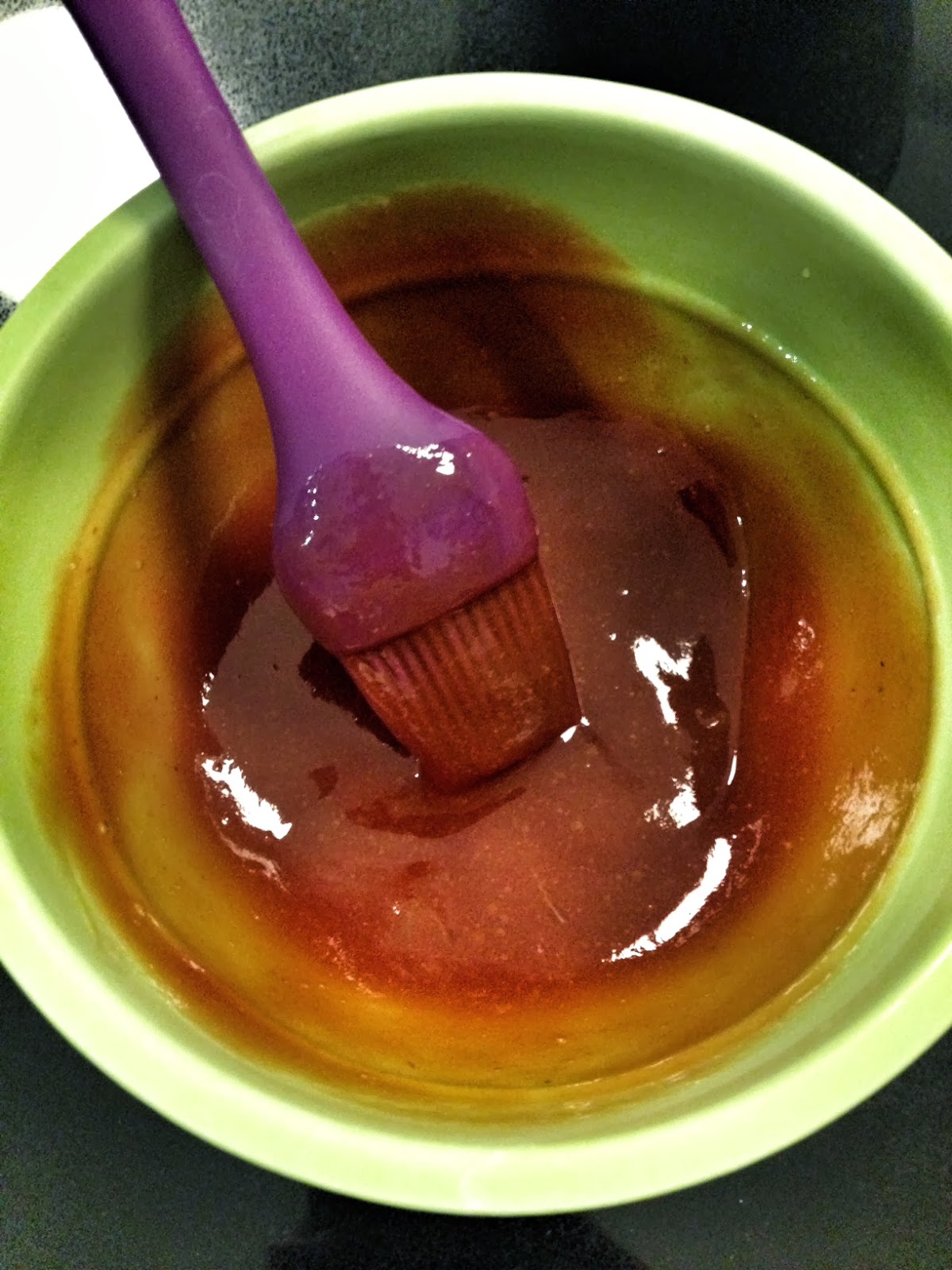 Prepare a ketchup glaze of 3 tbsp of ketchup *I used Heinz*, mix them with 1 tbsp of egg whites.

Soon once the treats are out....glaze each and every piece carefully...
lower the oven temperature to 95*C and bake for 15 minutes, or until the glaze has set 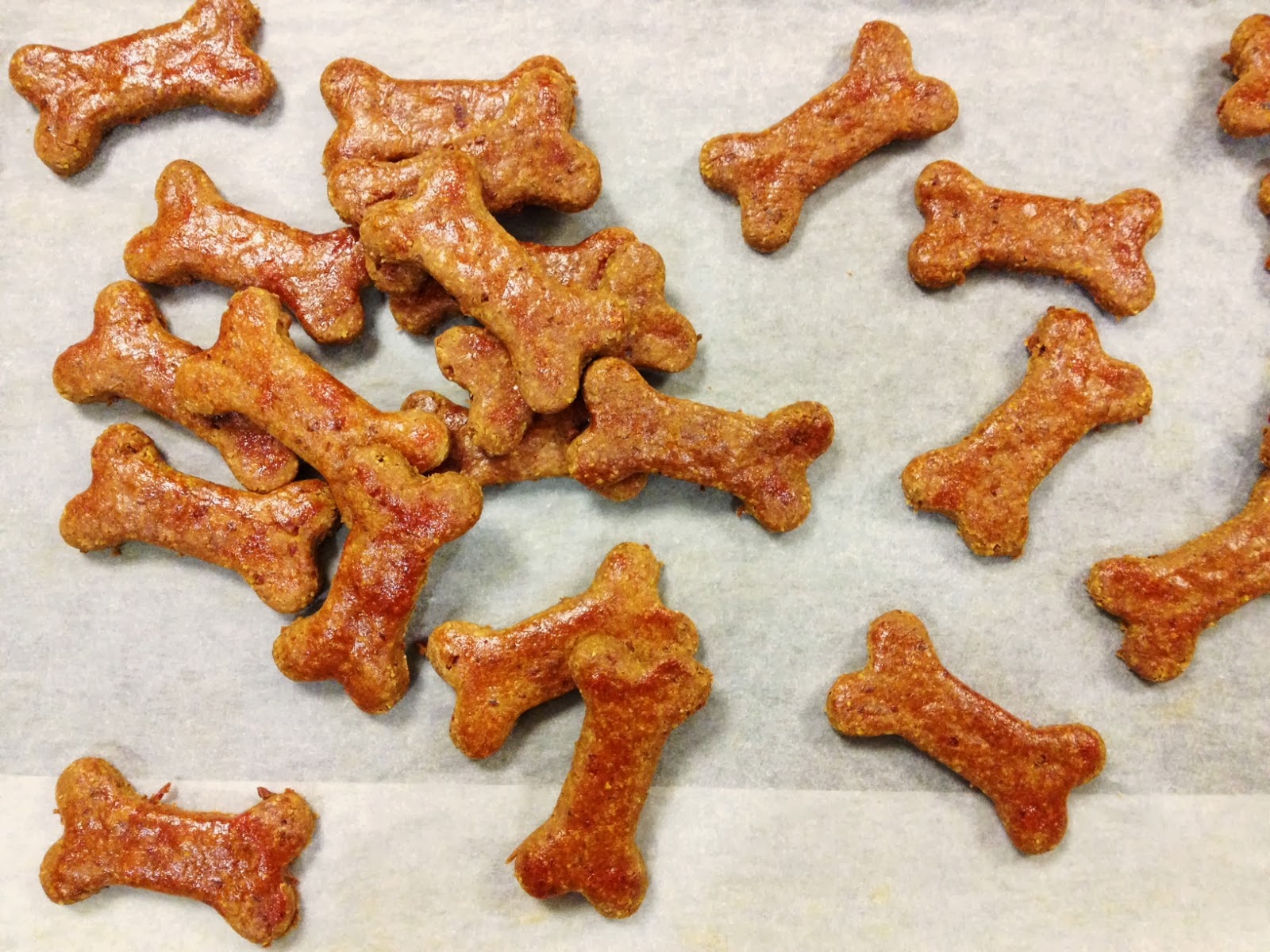 Ta-DA!!!!!
phewwwwwww
Wat kind of hardwork is this!!! baking macarons is so much easier!!!

Let them cool and transfer to air tight containers. These treats can be kept for one month long. Soon the treats were delivered to the LUCKY REALLY LUCKY SUPER LUCKY DOGS!!!! 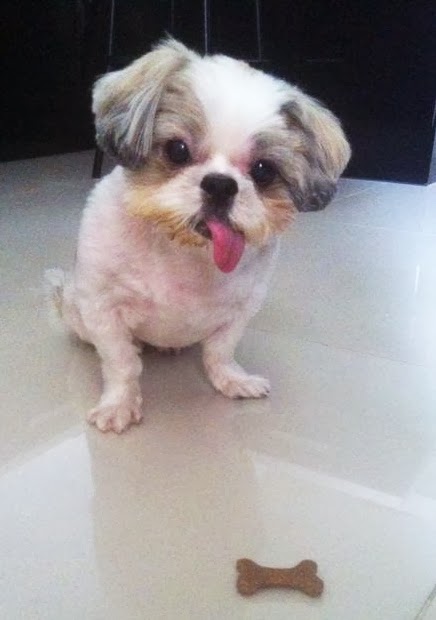 Taffy sticked out her tongue...I don't know if that's an approval or wat? 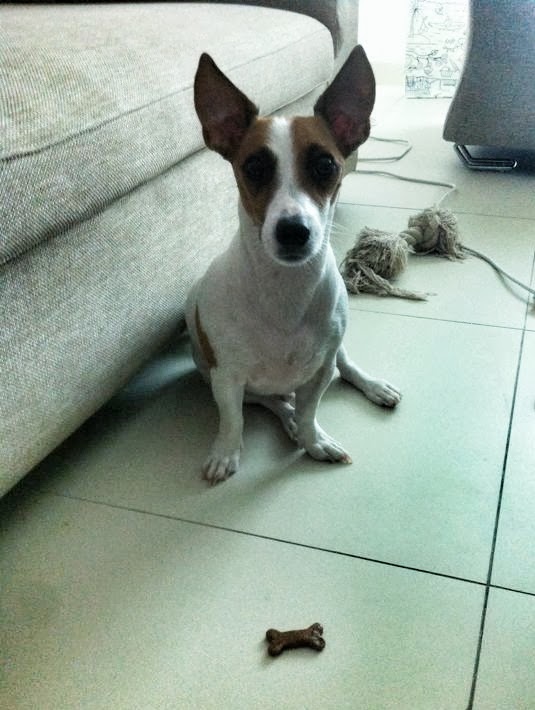 Hardee looked terrified of the dog treat. Don't worry doggie, I won't poison u despite wat u did to your momma last week...by running away and the entire squad had to be deployed in a search and rescue effort to retrieve you......all while u were busy sniffing at the bus stop waiting for a bus.
-_-" 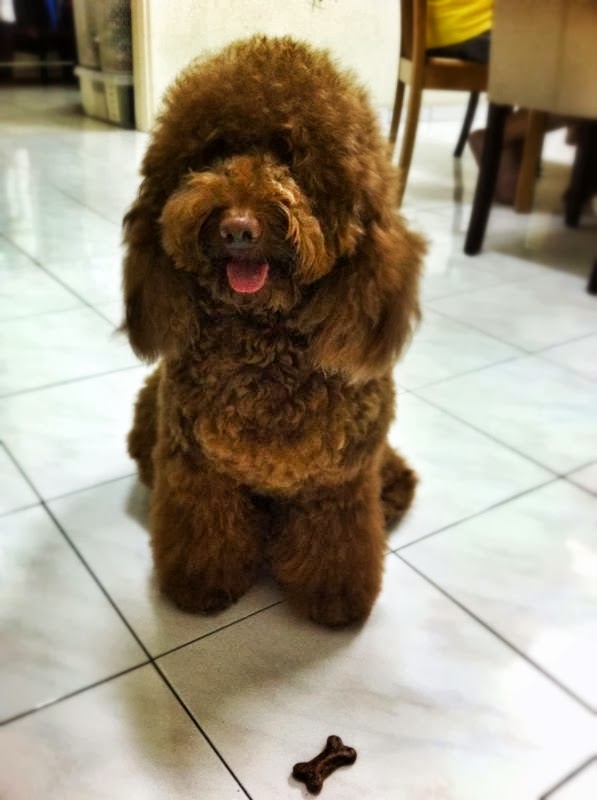 I don't know how these owners, made their dogs wait before they can chomp chomp nom nom on their treats. According to owners, the dog did not reject it but they say pleaseeeeee don't do this anymore!!! don't bake for their dogs anymore!!!!!

okie the list of ingredients are as below again:
453g of sliced bacon, cut into 1 inch wide pieces
370g of chicken livers, cut into 0.5 inch pieces
130g of fine cornmeal
450g of all purpose flour
235g chicken stock

the Glaze:
3 tbsp of ketchup
1 tbsp of egg whites