The route des grand cru simply translates to “road of the great wines” and is one of the highlights of the province of Burgundy. As an avid burgundy wine drinker(or simply alcoholic!!), to travel this route is achieving one of the objectives in our very long list of outstanding “must do”!
Do stay with me as this may drag cos I may have to define certain words unique to wine terminology. 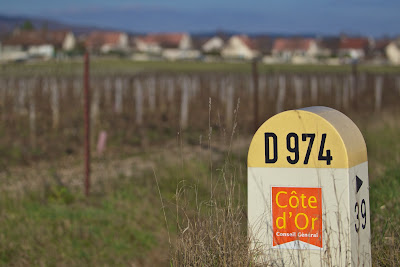 You will keep hearing this word in this post. In English it simply means "golden slopes or golden hillsides" 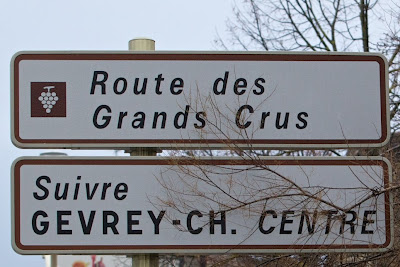 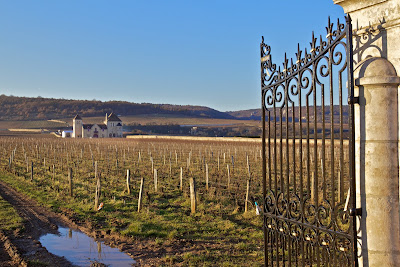 The vineyard of AOC Clos de Vougeot
A bit of geography and geology. The route des grands crus runs in a North South direction from Dijon to Beaune and ends in Santenay in the south. It basically runs across the Cote D’or which simply means golden slopes or golden hillsides in French. The Cote D’or is divided into two sections namely Cote de Nuit in the north and Cote de Beaune in the south and inarguably the Cote de Nuit produces the finest and most expensive Pinot Noir in the world!
So what makes this place so special?? The Cote de Nuit is actually a Jurassic age limestone outcrop and in general it consist of limestone and marl(mixture of limestone and clay). In area of high concentration of marl, Pinot Noir will be planted whilst Chardonnay will be planted in areas dominated by limestone. Yes, the grapevines need poor infertile soil to grow and to produce good grapes to make good wines……a bit illogical actually but that is the fundamentals of viticulture! The lack of nutrients “encourage” the roots of the grapevines to reach out deep into the underlying sub soil strata hence absorbing all the minerals which gives the grapes and ultimately the wines it’s unique character.

Apart from the geology, this place also has a unique a climate and microclimate system and hence arise the concept of “terroir” in winemakers terminology and it’s this terroir that’s makes this place so special.

So we found ourselves traveling along the A6 southbound from Paris to Dijon on this cold winters day with Dinos at the wheels and me navigating(repeating to Dinos what the GPS is saying!)and monkey and saint veeny sitting quietly in the back seat and most probably suffering in agony from Dinos great driving! The distance is approximately KUL to Penang so that’s pretty decent and easy drive.

Soon we exit the freeway and found ourselves in the lovely old town of Plombieres de Dijon which is a small satellite town outside the main town of Dijon.. The first thing that we saw was …………yes, you guess right. mustard factory!! Dijon mustard or moutarde de Dijon which the French call it, is world renowned and is great with gamy meat such as peasant or rabbit. Funny thing though we did not see any mustard plant field……….want to know where the factories get their mustard seed?? then go to wikipedia and you will probably be surprised :) 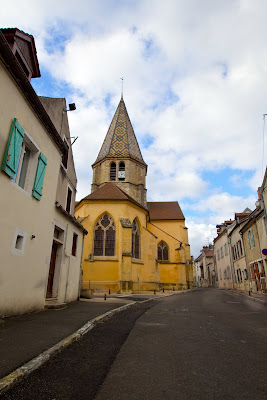 The church in Plombieres les Dijon. 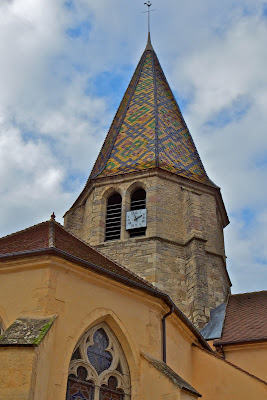 The magnificent color tiles of the church spire is typical of burgundian architect. 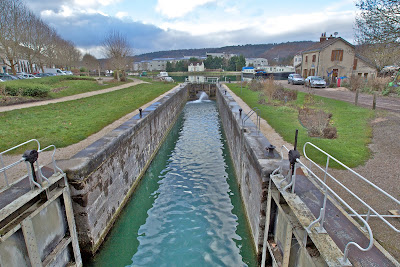 One of the many locks of the infamous Burgundy canal. Want to know more about this canal.....check it out on wikipedia. It is actually a very important linkage of the waterways in France and it actually connects the Atlantic coast to the Mediterranean coast of france and it was constructed pre industrial revolution!

As we continue our journey the first commune or village we come across in the Cote de Nuit is Marsannay-la-cote and followed by Fixin and Brochon. Next is the famous village of Gevrey Chambertin which we will be spending a night. 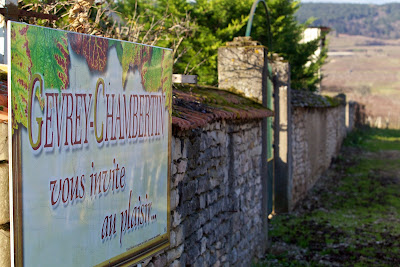 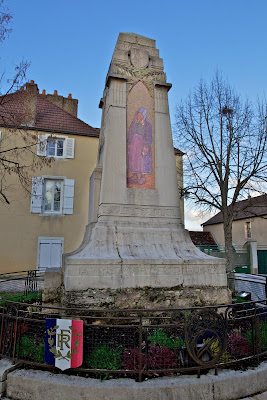 The memorial in the village of Gevrey Chambertin. 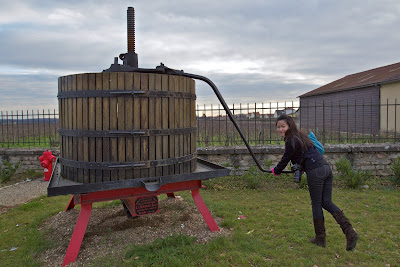 Cheeky monkey with a traditional press. Nowadays the process of pressing is carried out by machines. 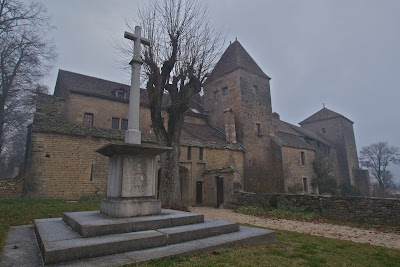 The chateau Gevrey Chambertin standing tall in it's former glory. 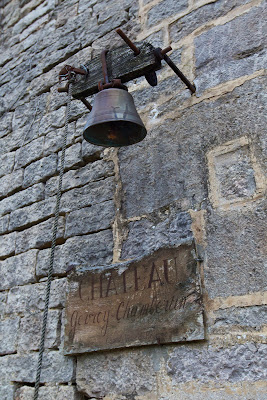 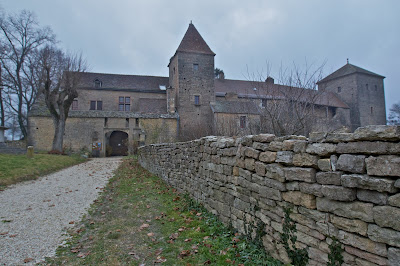 Near this chateau you will also find the premier cru AOC(appellation d’origine controlee) or simply “parcel” of Clos St Jacque and les cazatiers. For the benefit of the less informed readers, basically the boundaries of all the parcels in burgundy have been carefully delineated and determined as Burgundy is seen as the most terroir conscious region in France. This practice dates back to medieval times when monasteries play an important role in the development of the Burgundy wine industry. For my wine kakis, this all sounds too familiar right?? :)
Now a little about the commune of Gevrey Chambertin. The village of Gevrey Chambertin has 9 grand cru AOC and more than any other communes in the Cote D’or. Amongst the most famous are the parcels of Chambertin and it’s extension Chambertin Clos de Beze. The other grand cru parcels are chapelle chambertin, Ruchottes Chambertin, Charmes Chambertin(just drank a bottle of 2001 vintage on Christmas eve :) ), Mazis Chambertin, etc. These parcels are famous for the quality of their elegant red burgundy. The soil in Gevrey Chambertin or for that matter the whole of Burgundy being calcareous will give rise to black and red fruit notes in the early years of the wine. Later on these notes will developed to one of preserved fruits. Spicy nuances are also found on wines from this commune as the pinot noir grapes are harvested when its very ripe and the wines will develop pepper aromas which lends character and style. According to most Burgundy wine makers, the properties and character of the wines are more or less determined in the vineyards hence you will find the Vigneron spending most of their time in the vineyards clearing old canes, harrowing, replanting, pruning, earthing up, soil replacement, de-budding, etc and it’s hard work cos you have to bend low most of the time !! 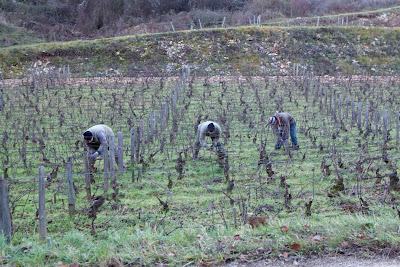 See what i meant about bending down low. Its actually back breaking work!

In Gevrey Chambertin you will also find the domaines of winemakers such as Fourier, Pansiot, Ponsot, Pierre Damoy, Rossignol Trapet, etc and off course the infamous Armand Rousseau. 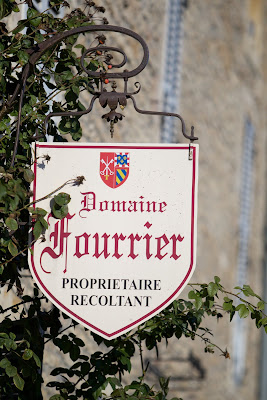 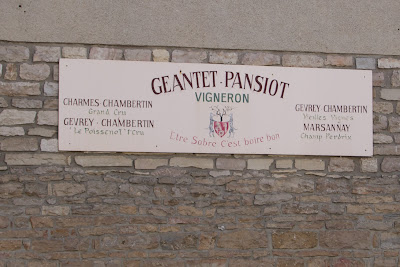 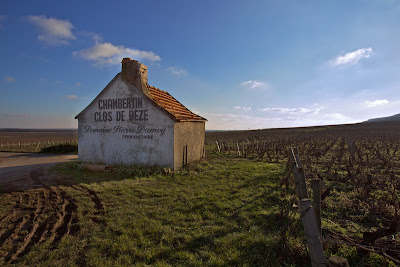 That's Chambertin Clos de Beze and this plot belongs to none other than Pierre Damoy(subject of another post). 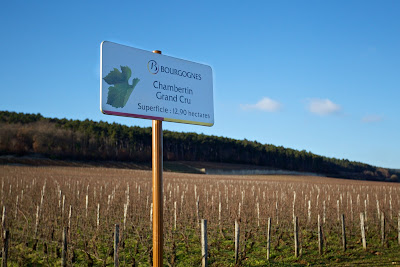 That's the designated parcel of Chambertin and as you can see the total acreage is only about 12 hectares. Regulation requires all grand cru AOC to produce a maximum base yield of 35 hectarelitres of wines and that converts to about 4700 bottles per hectares which is like 400 cases/hectare. That should give you a pretty good idea why good wines are soooooo rare!! 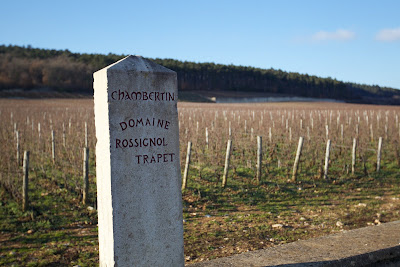 Domaine Rossignol Trapet owns part of the Chambertin parcel in addition to Domaines like Armand Rousseau and others. 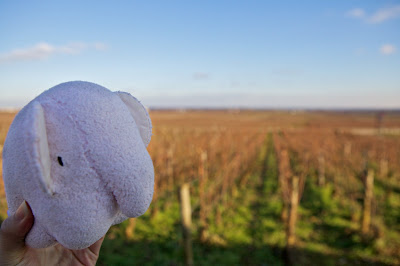 and yes, Berr was there too :)
As you drive drive along this route, next to the Chambertin parcel is the grand cru AOC of Latricieres Chambertin and before you can blink you will see this next signage. 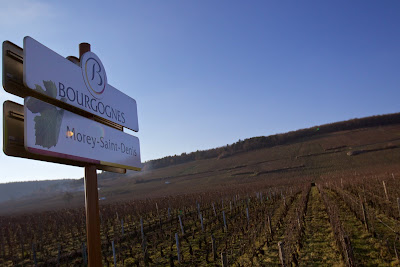 Yes, you have arrive in the next commune of Morey St Denis and the communes are basically separated by probably a road and yet the wines produced by the two neighboring parcels are so amazingly different in character.

Part 2 of my posting will be about our journey further south to the communes of Morey St Denis and so on.