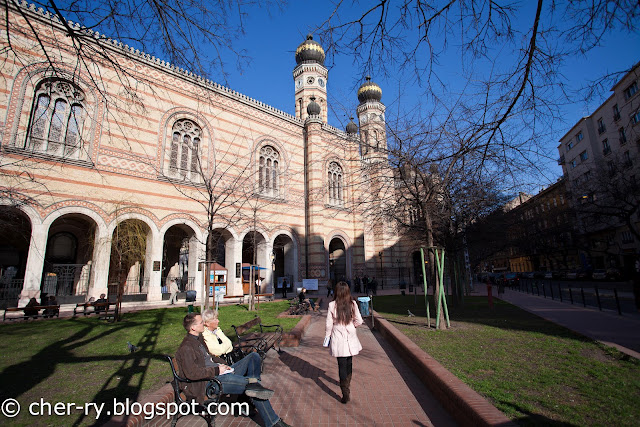 Monkey on her way to the Great Synagogue
the largest Synagogue in Europe, and the 5th largest in the World

Monkey has been working for a great Jewish boss for the past 6 years
I better understand his religion and beliefs in order to assimilate into the company
*hahahahaha*
though very sensitive to speak about esp in Malaysia, I have no qualms and I admire him greatly
:))))))))))))))))))
well if u noticed, our dearie Malaysian passport can go anywhere around the world from Timbaktu to North Pole except Israel >.<

I think it's still not too late to blog about this, though the visit was done back in April. The Great Synagogue was part of the itinerary, in fact it was so important I put a star next to it in our itinerary sheet. 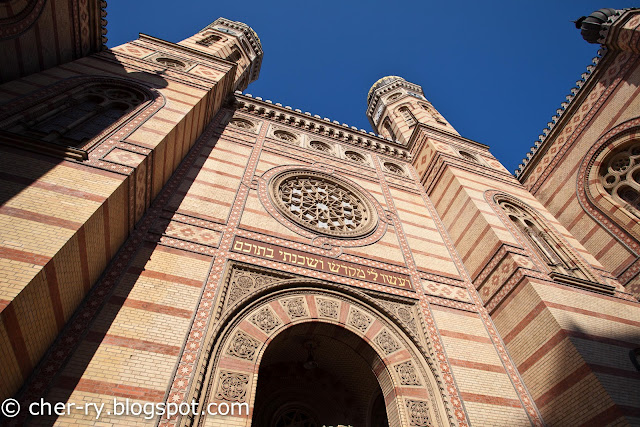 okie, if u really have time and wanna do some research over the weekend...go do some reading about Islam, Christianity and Judaism
coz it's gonna be lengthy and I don't think this posting can accommodate
:P:P:P
but I think all three are very very beautiful religions :)))))) 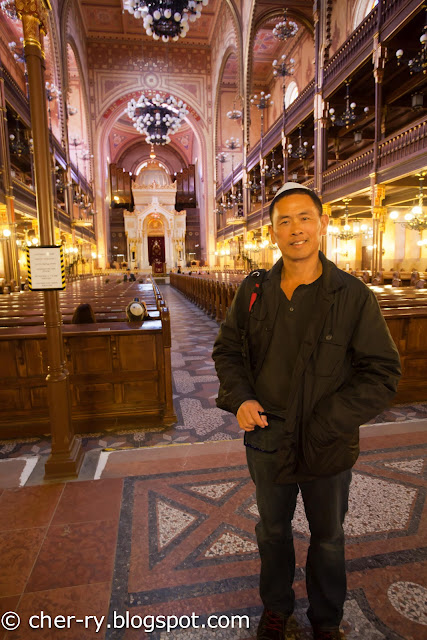 JS was wearing a white Kippah on top of his head
it was our first time stepping into a Synagogue and we didn't know what to expect
so we engaged in a private tour with a lady very well versed in English
plus she's a Jew :))))))))) and that made our tour very meaningful

when we stepped into the main prayers' building, an elderly man was trying to put the white Kippah on JS's head. JS in his usual protective/attack stance instinct immediately said no and shoved the old man aside....>.<

awww that poor elderly man was trying to explain that by Law all men entering the Synagogue must have their head covered...and he was explaining it in Hungarian >.<
we felt so uneducated and ignorant WAHAHAHAHAHHAHA
*and most of all Horkatis = orang Kampong!!!*

okie Mr. JS, next time we better do our homework before doing any historical visits, and that includes types of stones/soil esp when we need to do Indiana Jones kinda visits
*click here to read our extremely Archaeology adventure* 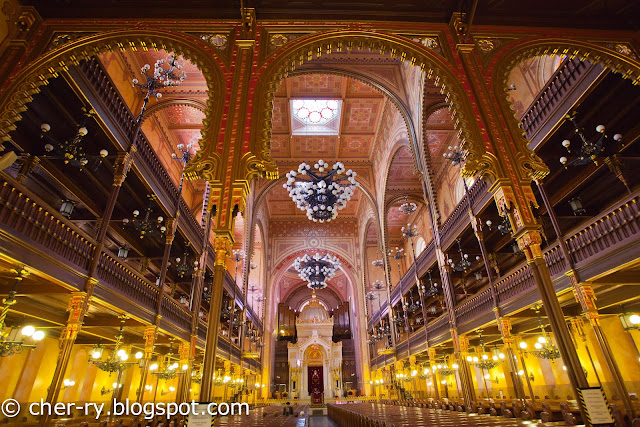 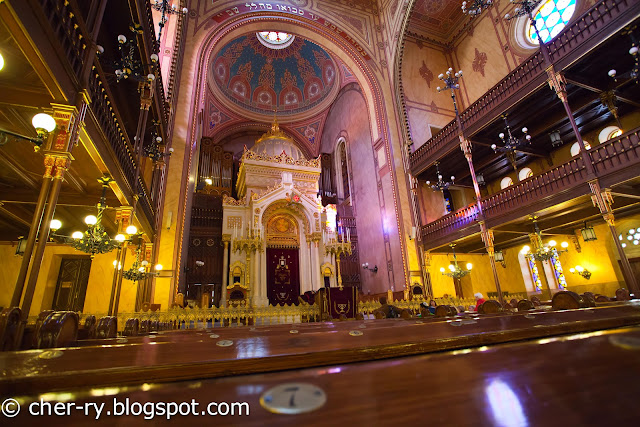 this Synagogue was built in 1854-1859 following the Byzantine-Moorish style by a Viennese architect - Ludwig Forster.
the lower level are meant for Men...while the upper 2 levels are for Women and Children
reason being is, the men needs focus and concentration during service so it is better to separate them
the entire hall can accommodate about 3,000 worshippers at once. 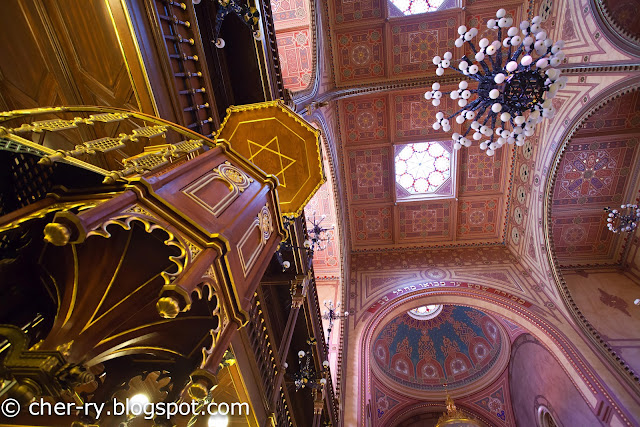 u see, in Judaism, they don't worship angels, animals etc
so there's no sculptures of heaven hell, angels, demons, animals of half man half horse....
there's only geometry shapes and flowers
:))))))))) 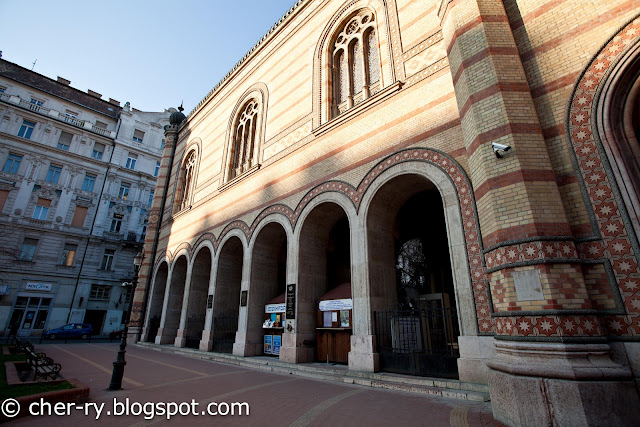 the exterior of the building
with facade of white and red brick
kinda reminded me of Venice with those moorish windows :)))))))
if u like architecture and design....u'll definitely gotta learn this 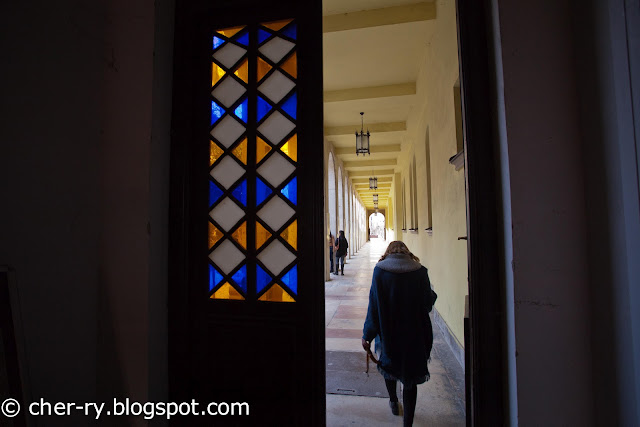 Later our guide took us around the Synagogue to the courtyard
love this multi colored glass/wooden door
when the Sun shines through it, multi colors were reflected
made me a happy girl - well for the time being...before I started to cry for what I saw after this door 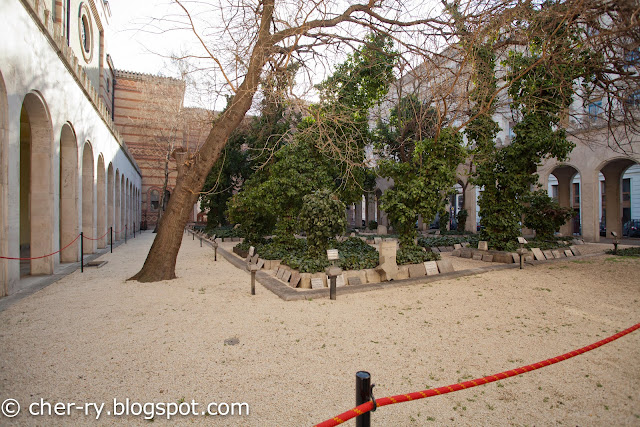 after that door, was this serene peaceful courtyard of trees which are definitely so much older than me
it's actually a MASS Grave
of Men, Women and Children 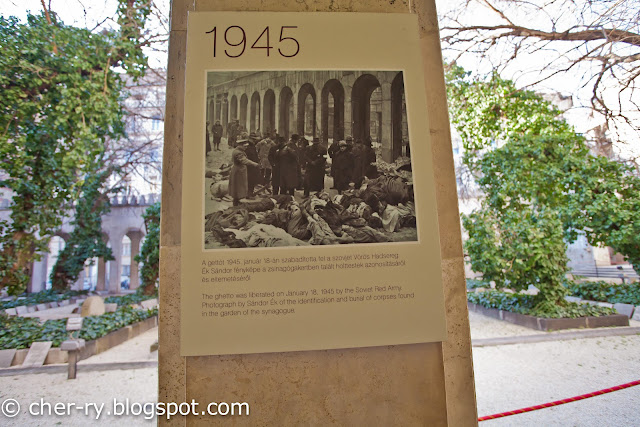 unforgiving pictures where piles and piles of human beings being stacked upon each other
u can't tell which body parts were they...but you could tell from the lifeless limbs entangled in that bundle 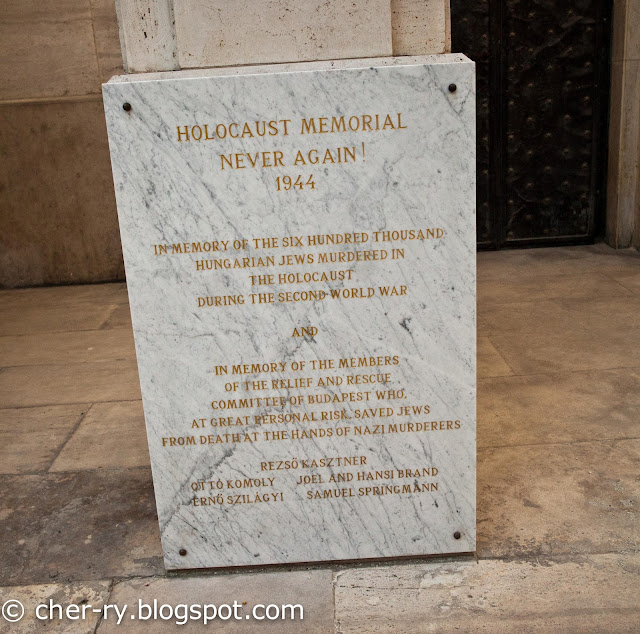 600,000 people were murdered then in Hungary
but this was only a small fraction during the systematic wipe-off by the Nazi Germans led by Mr. Hitler

in total....3 million of Men, 2 million of women and 1 million children were killed mercilessly during this holocaust in the entire of Europe
that makes a total of 6 million.....6,000,000
*that also reminded me of Japan and China* 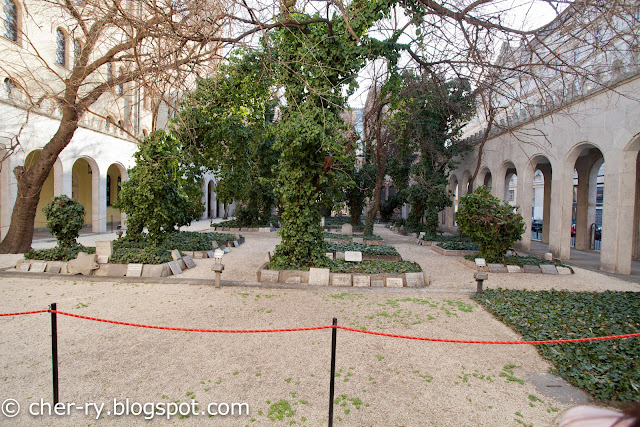 Today this mass grave is as serene as a beautiful park by the lake
with birds chirping not to happy tunes but to tunes that words can't describe but it just adds to the mood and ambience of this place
it's not exactly scary in a haunted way but a very sorrowful one. 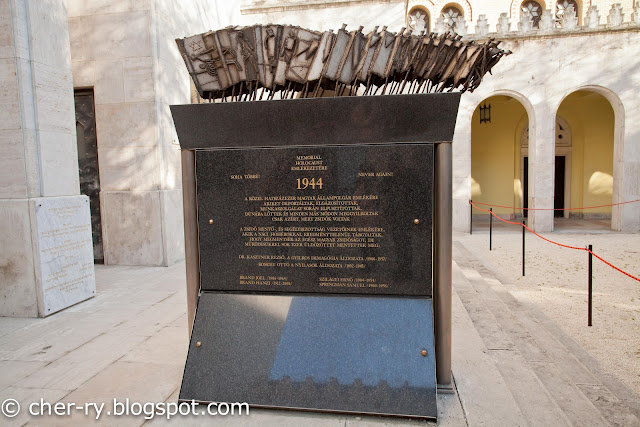 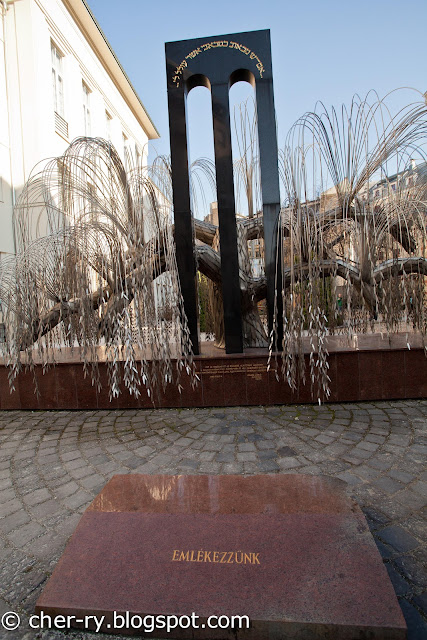 then the Guide brought us to the famous Holocaust Memorial - Weeping Willow
designed by Imre Varga in 1991and partly funded by the famous actor - late Tony Curtis
u know Jamie Lee Curtis??? *think Freaky Friday, Beverly Hills Chihuahua and You Again??*
well Jamie Lee Curtis is the daughter of Tony Curtis :))))) 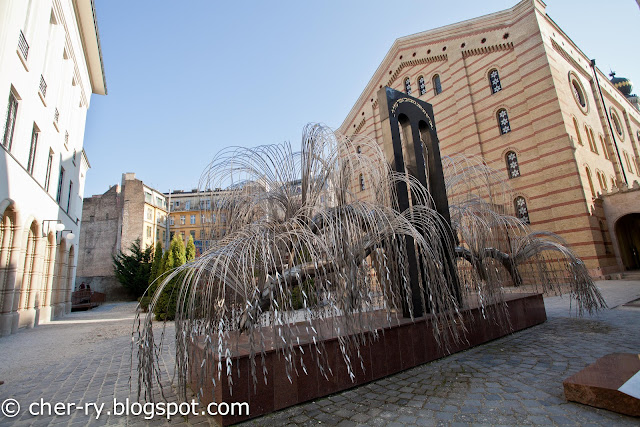 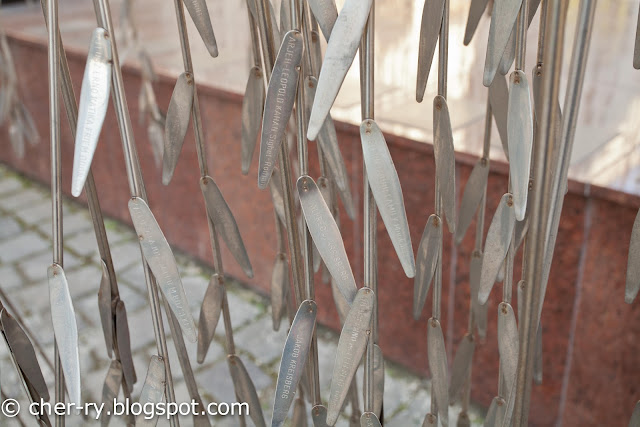 The weeping willow has got names in-scripted on each of its leaves
the 600,000 names
and it was then that I began to weep 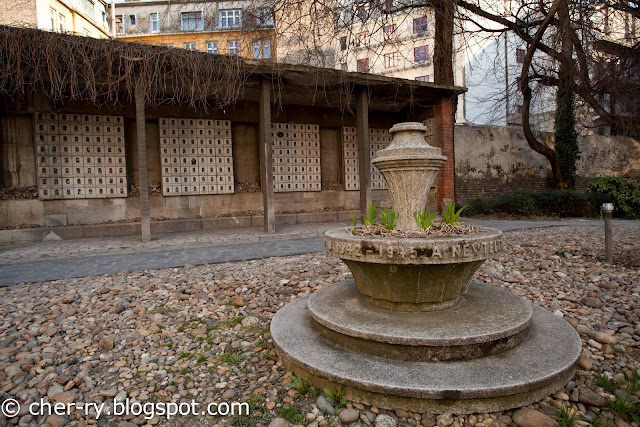 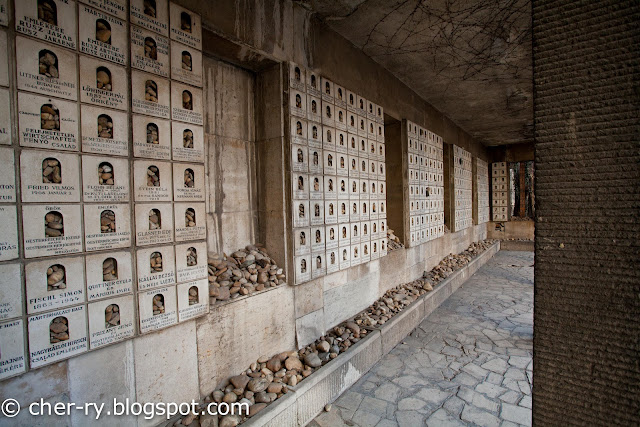 another abundant quarter of this area, we just walked around and explored
while our Guide Agnes was attending to some tourists asking questions 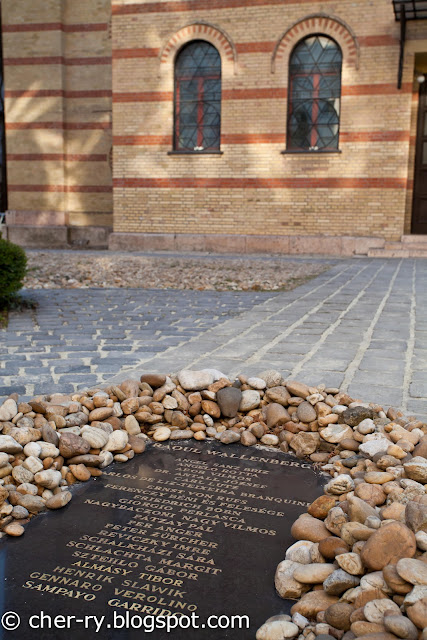 Names of Heroes and contributors were in-scripted here 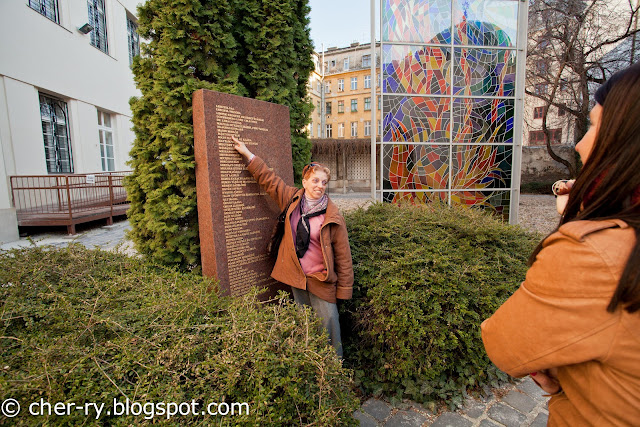 many other non-Jews and Jews took high risks to help Jews during this dark period. At that period, there is no religion nor lines to be drawn
it's about humanity and such killings and taking of lives is totally inhuman 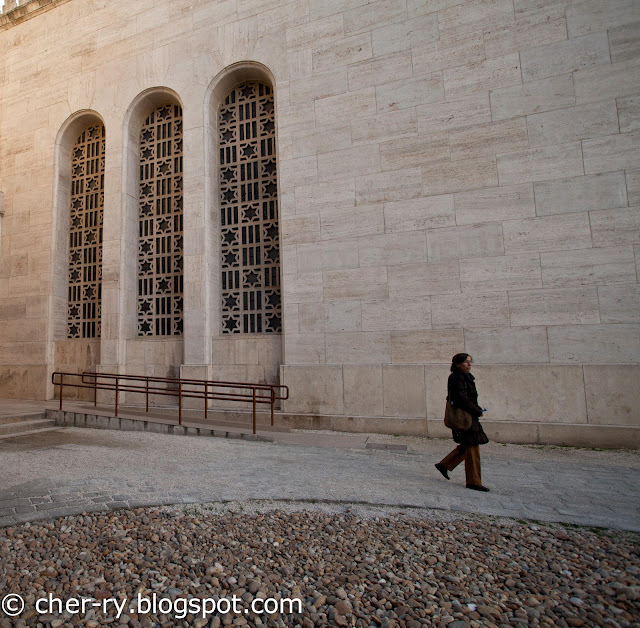 after about 1.5 hours of tour, discussion and questions we took some time to digest all the new information we have gathered. We were speechless but continued to walk around... 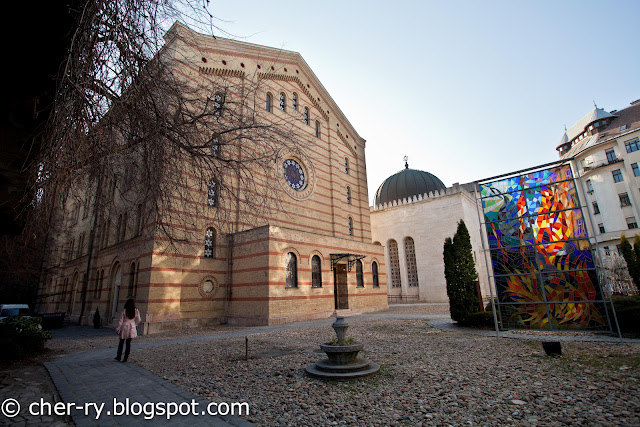 my heart was aching in pain, as I shoved my feet walking on the pebbles
it was definitely heavy but I'm glad we did this tour 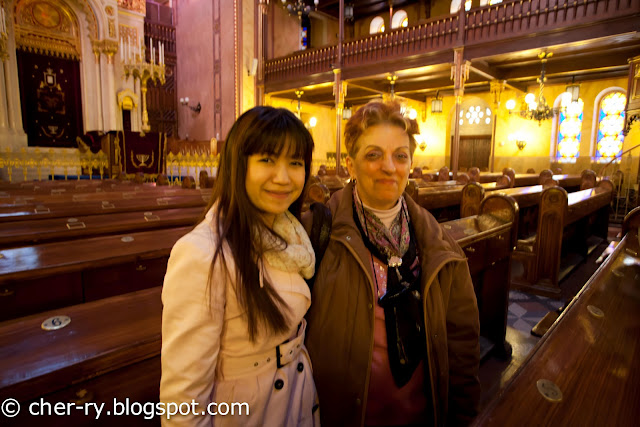 teary Monkey and our Guide Agnes, whom dedicated her life to the restoration works of the Jewish community in Budapest

Thank you for your passion, it's so deeply in-grained and I am surprised that though the pain was deep there wasn't hate in your eyes. It ain't easy to learn to be open and to let go. In order to achieve that, you have taught us that our thoughts our head is the vessel of our intellect and that's Wisdom of God. 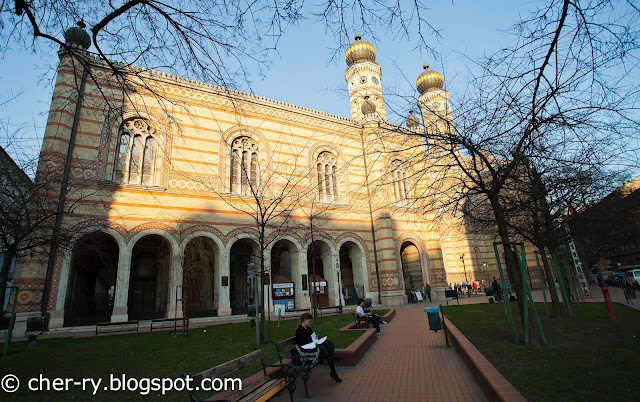 then we sat outside the park watching the sun sets together
before it fully sets.....we realised it's the end of another beautiful day and more to come tomorrow.
JS didn't wanna miss another beautiful sunset pulled Monkey back to the room
so we were dashing around on the busy streets of Budapest to our hotel like shooting another Mission Impossible hahahahaha
by the way Mission Impossible Ghost Protocol was partially shot in Budapest
:))))))) 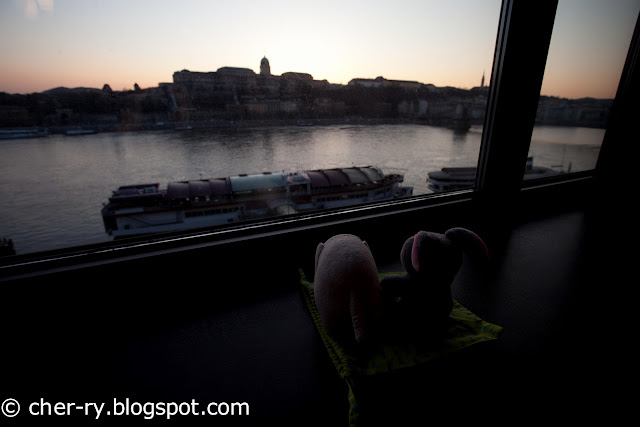 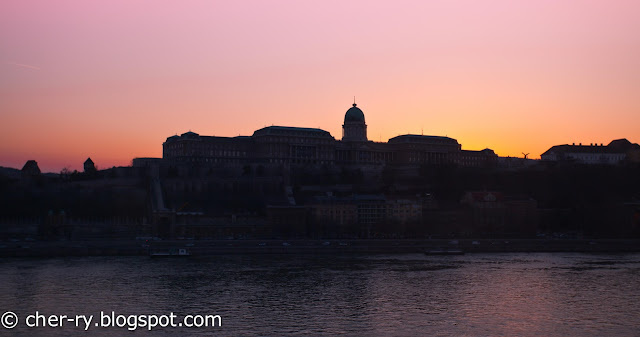 this was another milestone of our trip in April
now I am sourcing more interesting things to do in the next few months
and of coz interesting eats
:)))))))))))))))

If you look carefully at the plaque in front of the weeping willow, you will see six nail/pins on the plaque......it's meant to secure six candles to signify and remember the 6 million Jews that perished during second world war......all massacred by one mad man call mr hitler!!!
If he was still alive today and brought to justice, death sentence would be too mild to describe his punishment..........

Beautiful inside the synagogue!

The Holocaust is such a dark subject, but some survivors leave to tell the tale. I recently saw a documentary based on the story of Elie Wiesel, Nobel prize winner, a survivor of the Auschwitz concentration camp in Poland, also an author and political activist. It's just unimaginable that such act of cruelty towards human existed.

wow that must have been a very sad and disturbing documentary huh?