My most recent travel took me to this remote part of the world and it certainly was an eye opening experience and like the great Prophet Mohamad said “go in quest of knowledge even unto China” ……what he meant was “if you want to know more, go to China”…..so off I went to Xinjiang, China 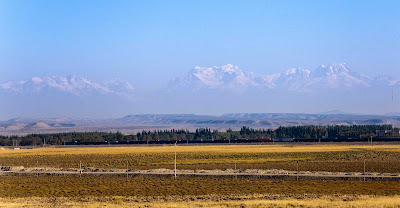 Xinjiang or “new frontier” as it’s name depicts, is the largest province in China and is 1.6 million sq kilometers in area and 1/6 the size of the entire China……..but yet it is the most remote and most forgotten and definitely most undeveloped part of China.

The first thing that comes to mind when one hears of Xinjiang is the infamous silk road probably popularized by tour agencies rather than historical knowledge of the region!!

Flanked by the Gobi desert in the north, Taklimakan desert in the south and the Tianshan mountain range in the west and the Himalayas in the south, this piece of dirt is really not as useless as it may seem……yes, there are lots of black gold underneath! In addition the valleys are quite fertile and economy flourishes from agricultural activities such as grape, fruits and tomato growing. 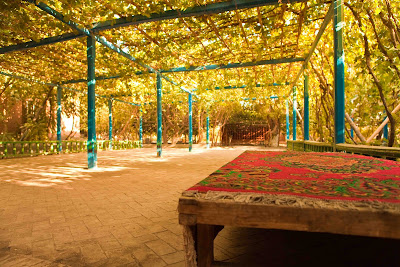 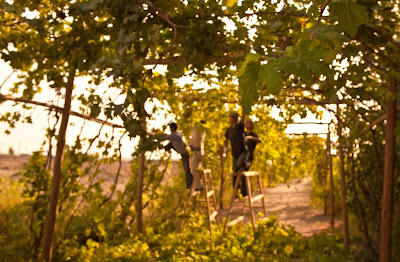 Workers pruning the grapevines in the late afternoon sunlight.

The neighboring countries are Mongolia, Russia, Kazakhstan, Kyrgyzstan, Uzbekistan, Afghanistan, Pakistan, Tibet, Nepal, India and Bhutan. Looking at the countries surrounding this autonomous region, one can expect the culture to be pretty diverse and it certainly is. As if this was not exiting enuf, the old silk road cuts through the city of Kashgar, Turpan and ends in Xian which was the capital of China then. One can stare out at the desert for hours at times and reminisce of how ancient travelers risk their lives with their precious caravans of silks and spices, travel through the harsh desert environment to reach their final destination……….and a journey may take years instead of hours :) The silk road itself is not only important for trade between east and west but also cultural, commercial, religious and technological exchanges and not forgetting the impact it has on the social aspect of the region. It is thus an important conduit linking the east and west and on a bigger picture, probably responsible for shaping global history to a very large extent.

As one can imagine being in such a remote part of the world, sceneries and landscape must be awesomely beautiful. 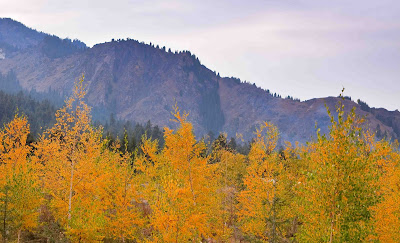 Maple trees with a back drop of Pine trees in Autumn. 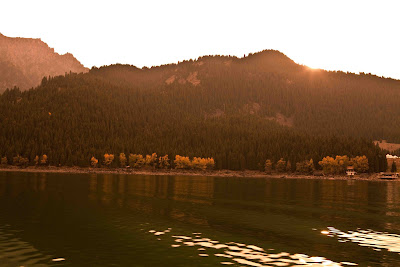 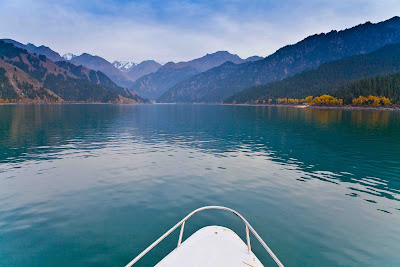 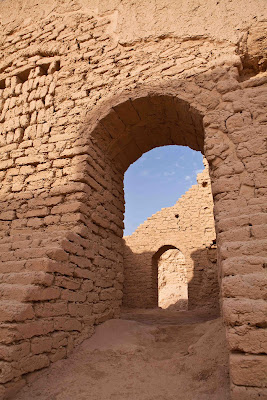 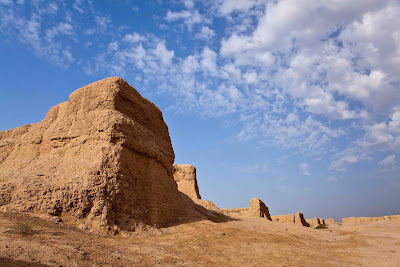 This place gets about 20cm of rainfall a year so most of the mud bricks have been weathered and disintegrated. You probably need 80% imagination and 20% visual creativity to make something out of these shapes! 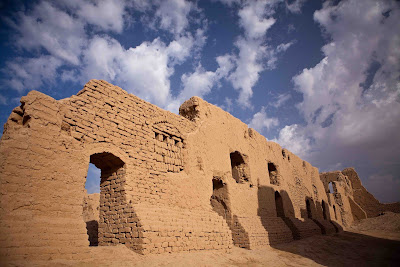 Part of the ruins at Gaochang that withstood the test of time. 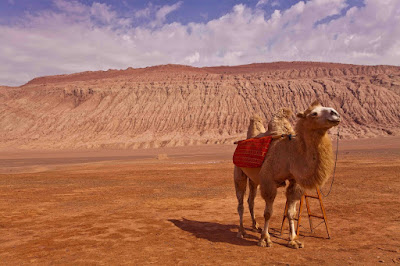 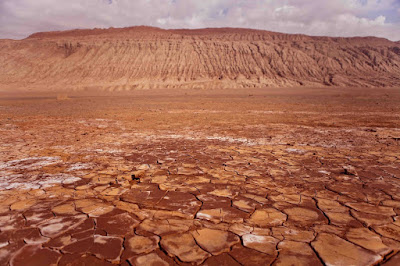 The Flaming mountain is actually part of the Gobi desert and extremely dry, arid and inhospitable!

Back in the mid 50s, the whole central Asia was part of a much disputed region between the USSR and China but as common sense prevail between the two great leaders (Stalin and Mao) they both sat down to negotiate instead of going to war and this gave birth to Xinjiang Uyghur Autonomous region of the People’s Republic of China. With a documented history of at least 2,500 years, and a succession of different personalities and empires vying for control over the territory, Xinjiang has been, and continues to be, a focal point of ethnic tensions. In reality there was some unrest as late as this year…….and one can almost sense the tension that exist between the Han Chinese and the local Uyghur as you walk down the streets of Urumqi which is the capital of the province.

In my opinion no one is to be blamed for this tension which has existed for hundreds of years. Lets go back to basics and have a look at the hard facts. Despite being the most under developed part of China, Xinjiang has progressed tremendously under Chinese administration. Look at the infrastructure. There is even a dual carriageway running across the Gobi desert! 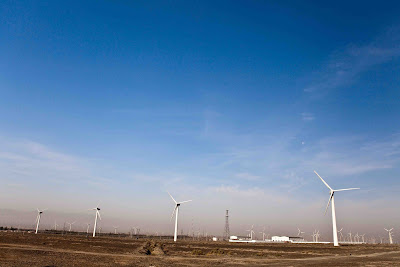 There are miles and miles of these wind generators. 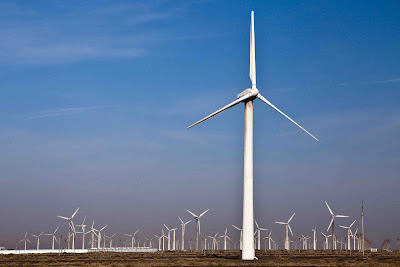 Mind you the rotor blades are like 10m radius!

On the other hand, the Uyghur people don’t like the idea of being rule by Chinese govermnent……..but then again it’s either being ruled by Chinese or Russian but since the break up of the USSR, I guess the Ughyur also want to be on their own like all the other ex Soviet states especially with all that black gold flowing.

So really the Ughyur people are caught in between and their destiny set and sealed when Stalin and Mao sat down around the table in the mid 50s to draw a couple of lines on the map to demarked the political boundaries :) 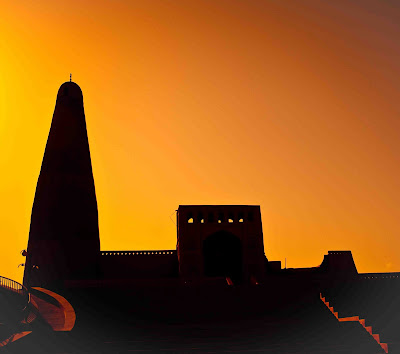 A 200 years old Mosque in Turpan

The Uyghur people is a turkic ethnic group and they live in central Asia and can be found in all the neighboring countries. In short they are not Han Chinese and they do look like Kazakhs or Uzbek or middle eastern so really Xinjiang does not have the feel of rest of China.

The Uyghur language sounds like a mix of middle eastern language Russian, etc…..and the religion here is predominantly Islam. The written Uyghur language is a simplified form of Urdu or Arabic. I find the people are friendly in general but then again like anywhere else in this world…….one can only expect friendliness if one is prepared to reciprocate J 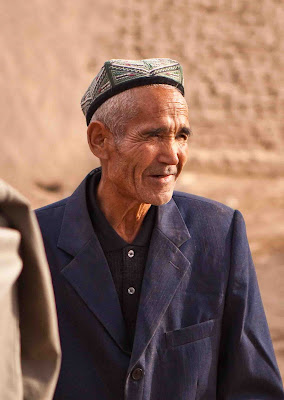 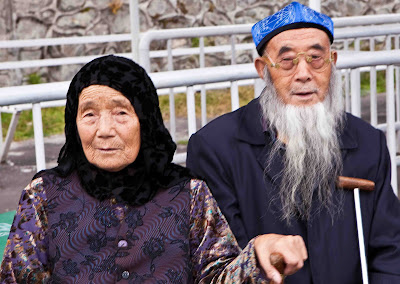 An elderly Uyghur couple and they didn't mind being photographed. 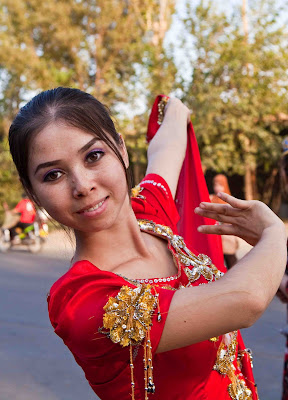 Music and dancing is in the blood of these people. 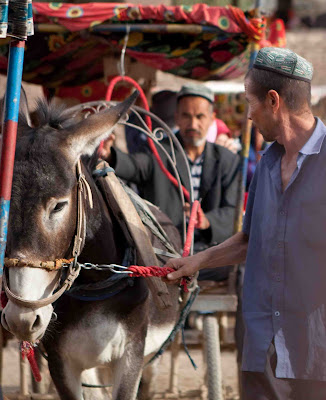 Uyghur man with their donkey and carts. 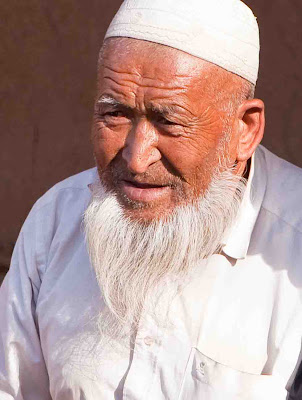 It was easy to capture shots of people :) 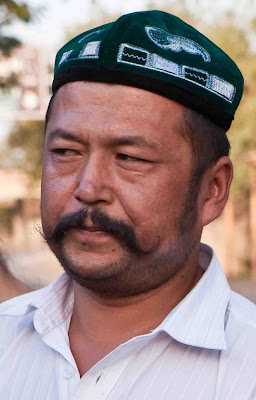 Where in the world will you get people posing for you like this?? 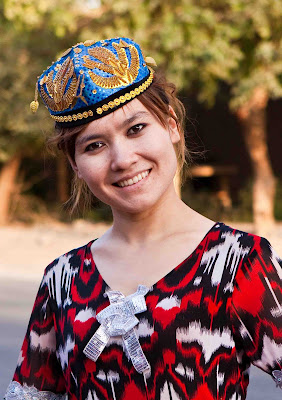 and like this?? I really enjoyed photographing all these people :)

The cuisine here is kind of mixed as one can imagine and is a melting pot of the various cuisines of the neighboring countries. You have the Lamb and chicken kebabs and naan/pita bread which is basically very Turkish or Greek and middle eastern and on the other end of the scale you have the rice, noodles, dumplings, mun tao and stir fried food which is definitely chinese.

Xinjiang also produces lots of raisins, sultanas and nuts. This is probably influenced by its proximity to central Asia. 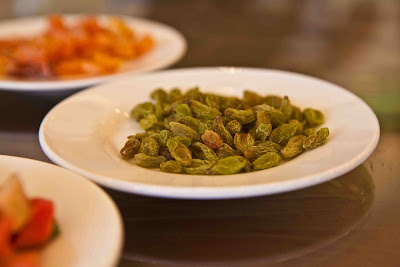 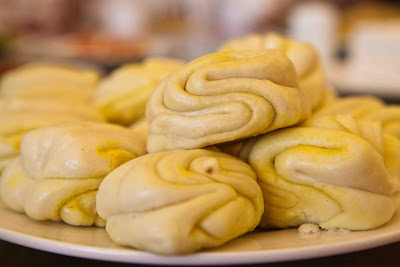 Man Tao which is very Chinese. 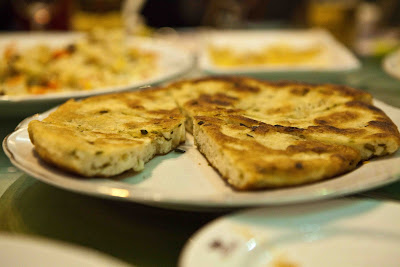 Naan like bread is a must at all meals. 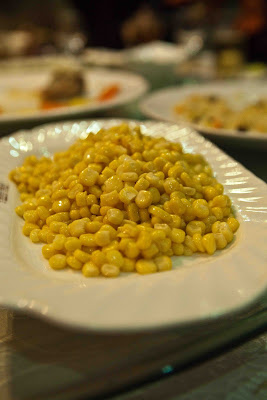 The other staple diet of Xinjiang is corns! 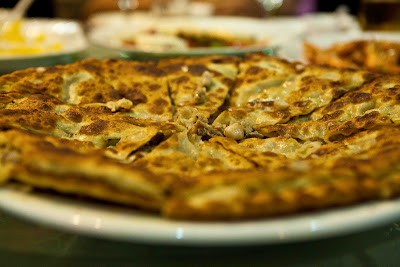 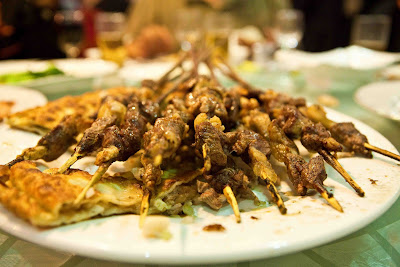 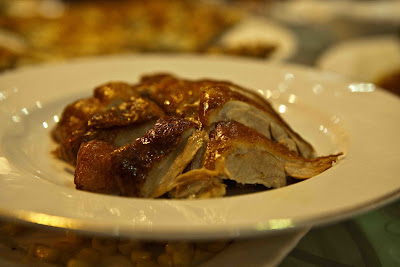 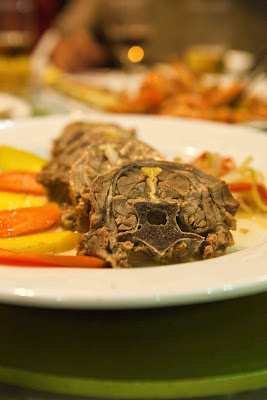 In the 4 short days, I have only managed to scratch the surface of this beautiful yet remote land. I have bookmarked this destination and will definitely return and this time it will be a full fledged photographic expedition with more photogs before all this natural beauty is lost or destroyed by the ever increasing thirst of global tourism.

p/s….my next posting is the local Food Bazaar in Urumqi :)

such diversity from sight-seeing to culture and food.

Hehe......yes, it's a travelogue(record) of my travel thru this new frontier :)) think I would have love to see more places if time permits......maybe go back another time just for photography :)))

could u just buy back some food for me the next round? am salivating looking at your lamb kebabs!!!!

Txs thevi. I was hoping to get some inspiration from the cuisine but food there ain't as interesting as one can imagine :)

the ruins amidst the lovely blue sky and the mosque at sunset is amazing. and capturing the locals going about their daily routine is great to see too. waiting to see more awesome shots!

Nice one js! U show us the other side of the world. Maybe you can start a travel blog, I'll be your no.1 fan! eemmm, maybe no.2, coz Monkey got my no.1! haha!

Kiddy chai, the sky always bluer in other parts of the world n it's a fact :))

Elly, how I wish I was working for a travel n leisure type of company so can travel n write for a living :))

JS: u wanna work for travel n leisure company and write? Go and be an editor for Vogue Travel. :)))

LOL! Now we know the true purpose of you still staying with the beloved company!

HaHa......yes TL, I still luv my job as much as the day I first joined BP albeit all the grumpling and grouses sometimes :) Besides the salary, I do get perks like free china trips, etc. I guess when u stay so long in a work place, you sort of hv an "equity" in the company........not equity as at shares but what you say an do carries a lot of weight n means a lot to the more junior staff.......you lose all this if you leave this company n hv to start all over again........me no time to go thru all that again leh :))