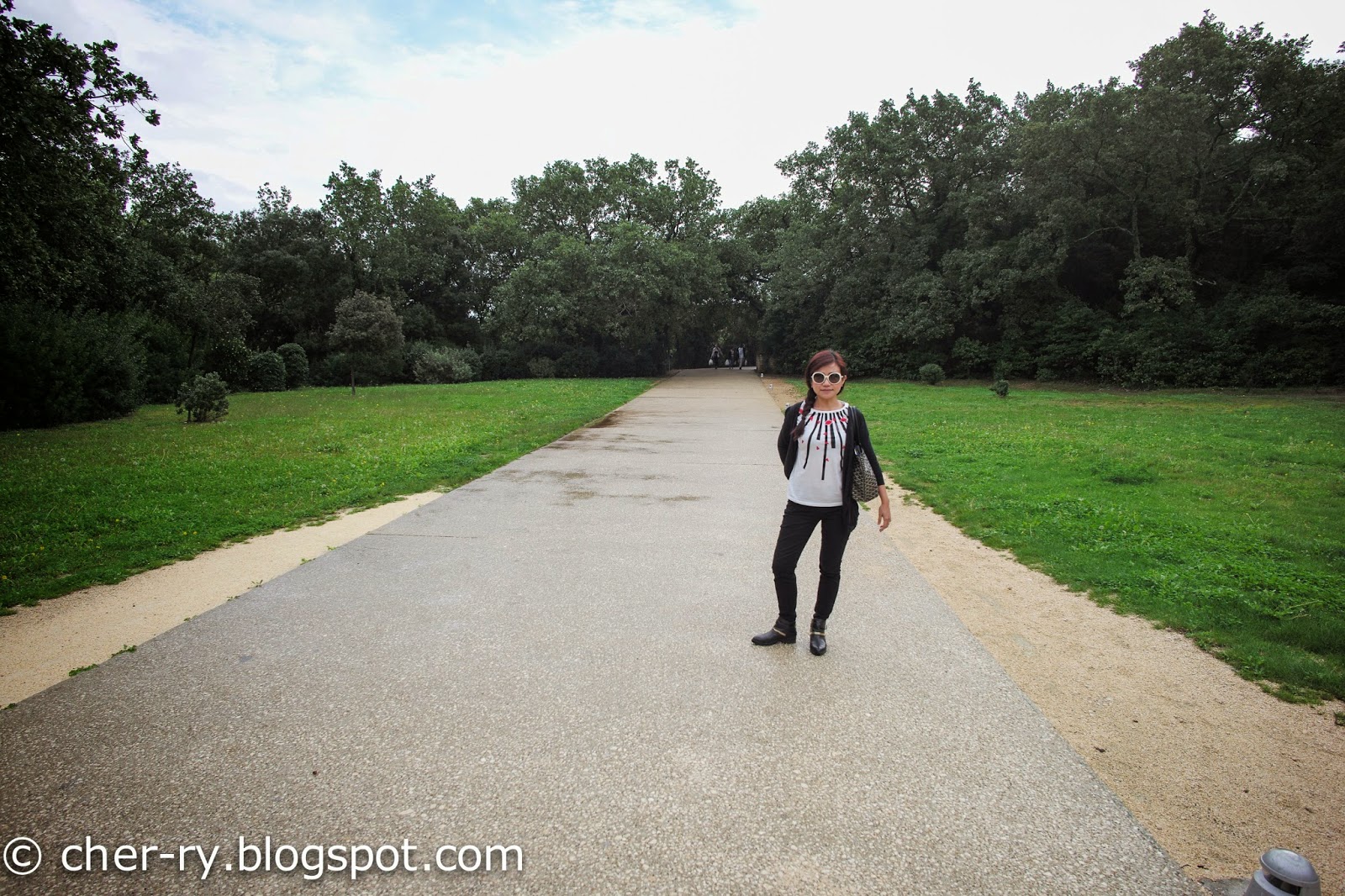 Monkey looked upset when hotel concierge at Avignon informed that due to heavy rain, Pont du Gard has been closed for safety reason.

ARGHHHHHHH~~~~ so off we went to visit Chateauneuf du Pape on that day. And because we have the sweetest chauffeur on Earth who treated me like his daughter, Monkey whined and whined and ranted until he called this UNESCO World Heritage site if there's a slim chance of it being re-opened after a day of closure. Awwwww he's the best-est chauffeur ever!!!! and he hurried us back into the mercedes after lunch and headed south to Nimes. 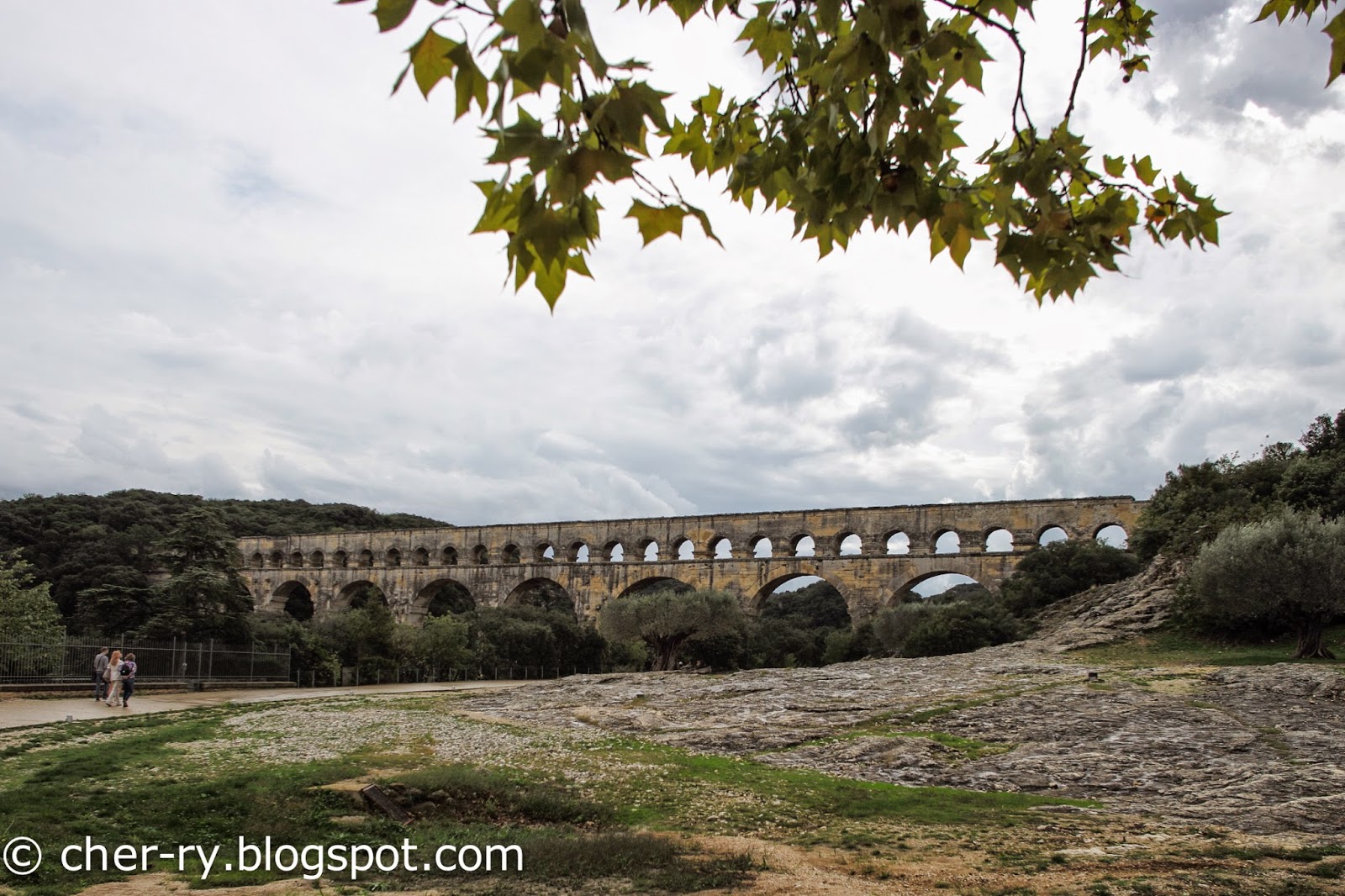 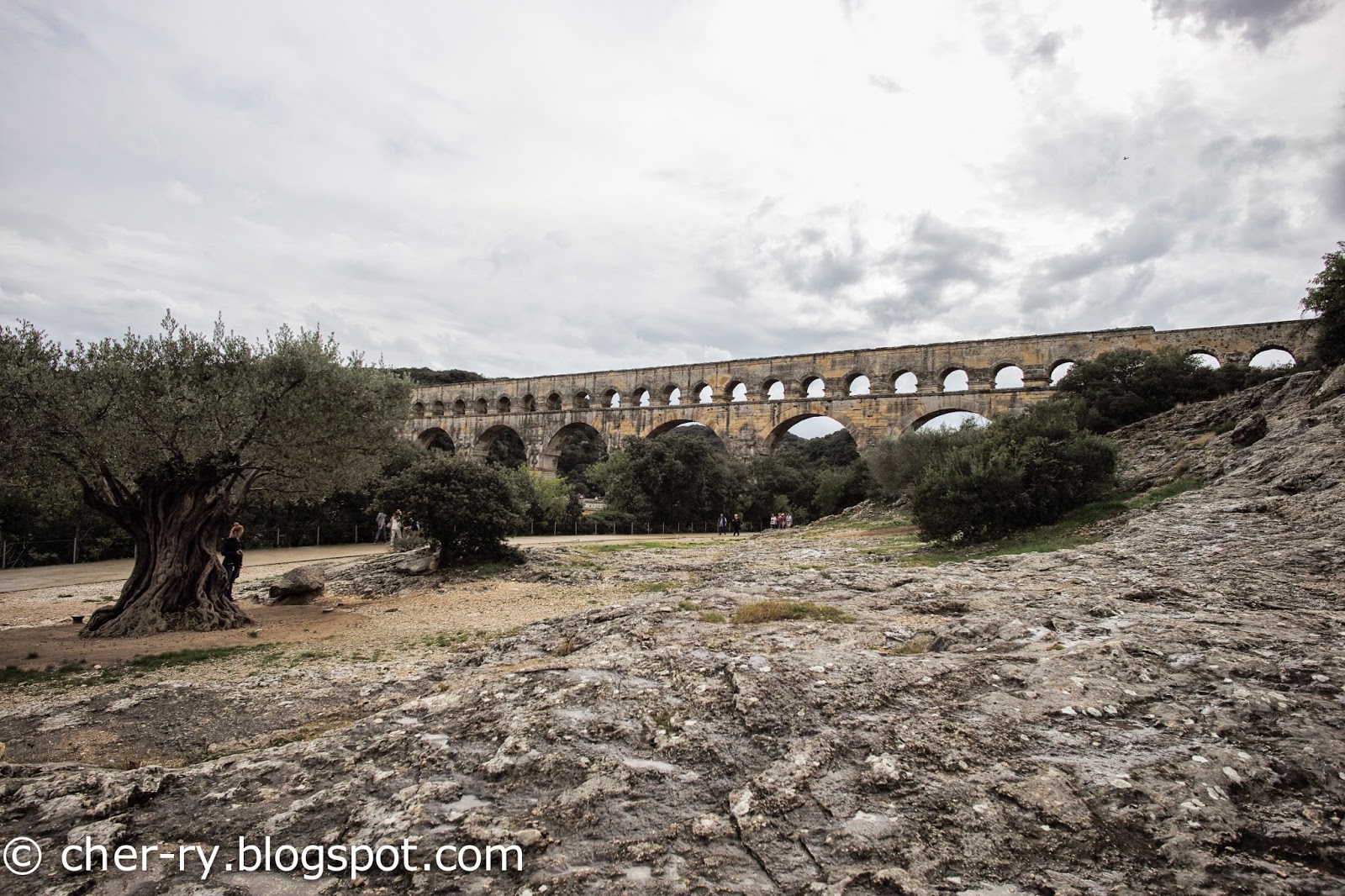 in less than an hour we were here.
WOoooooHOOOOOO
HOOOOO
WOOOHOOOOO

Monkey did star jumps and leaped up and down.
another of my to do list, not just for this trip but in my LIFE :))))))

Pont du Gard was constructed between 40 to 60 AD. That makes it more than 2,000 years old. Built by the Romans to carry water *wat else* from the beautiful natural spring water in Uzes to Nimes. Until today, it is still the greatest construction of the Romans. It gotta be, still standing tall and high after so many years!!! 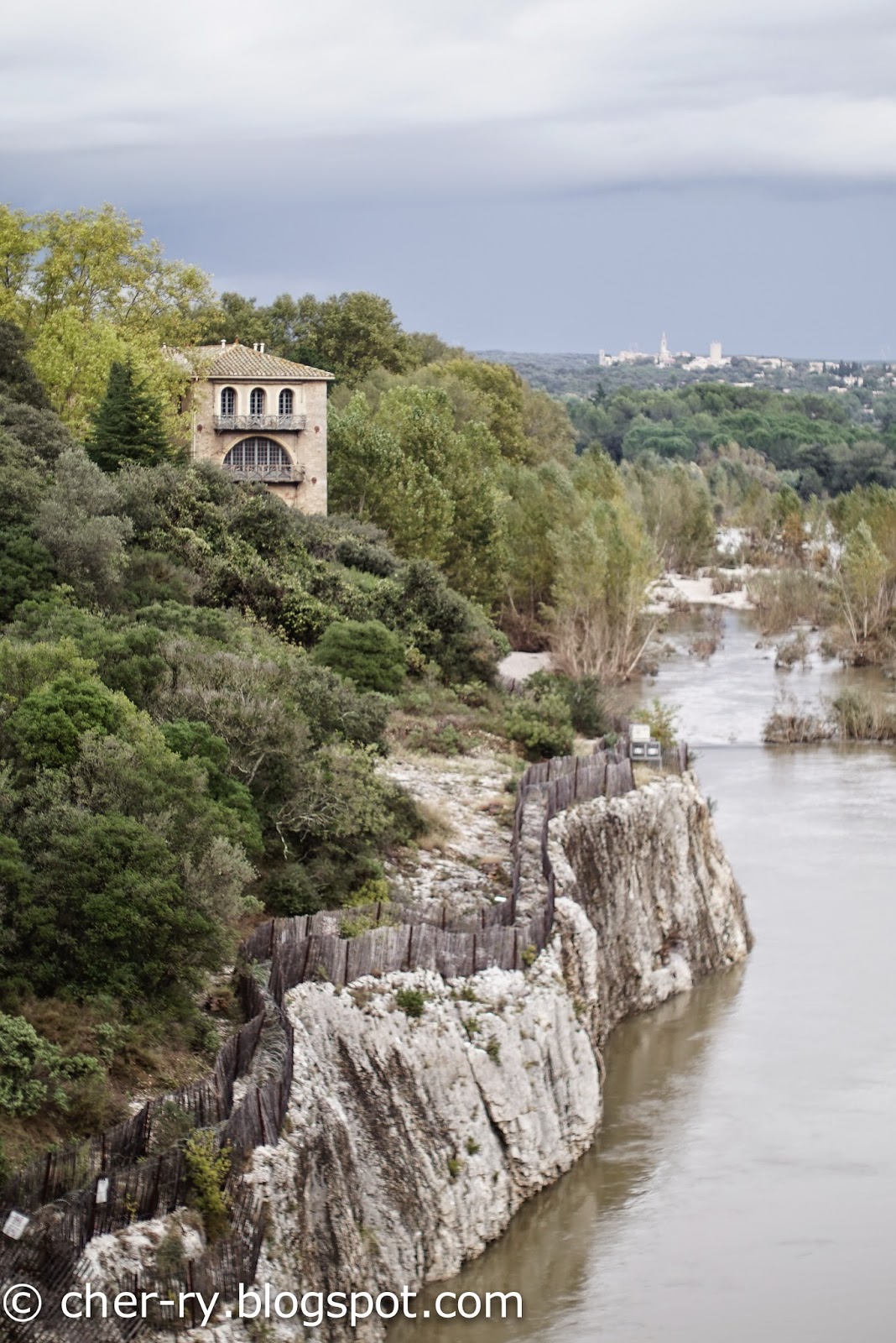 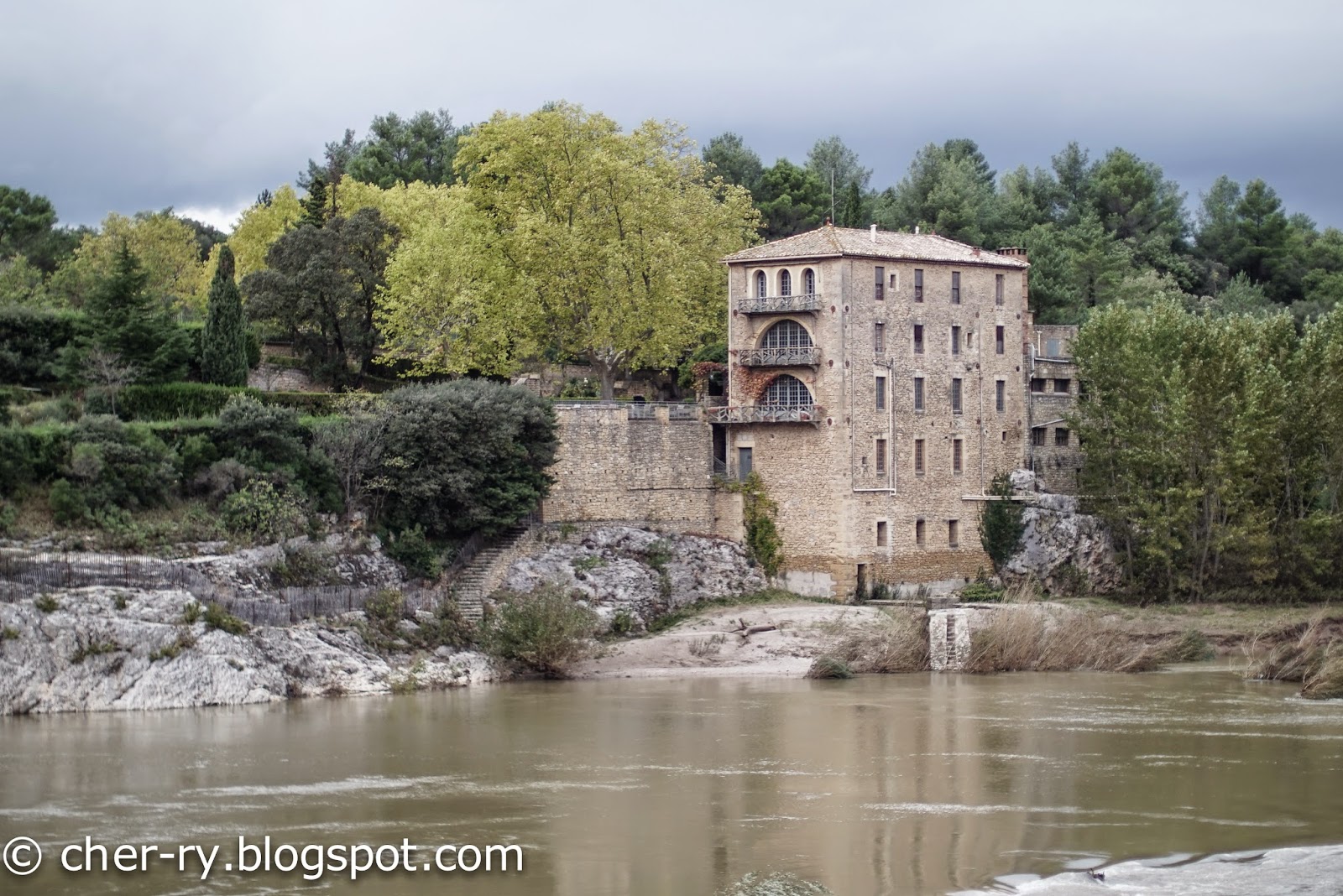 the Gardon River was murky after a heavy rain. U could see the water mark on this building. It was flooded much earlier due to a heavy rain fall in the middle of France. Large volume of water flowed down all the way south here hence this place was closed to visitors for a day. Gardon river flows into Rhone River, the largest river in France. 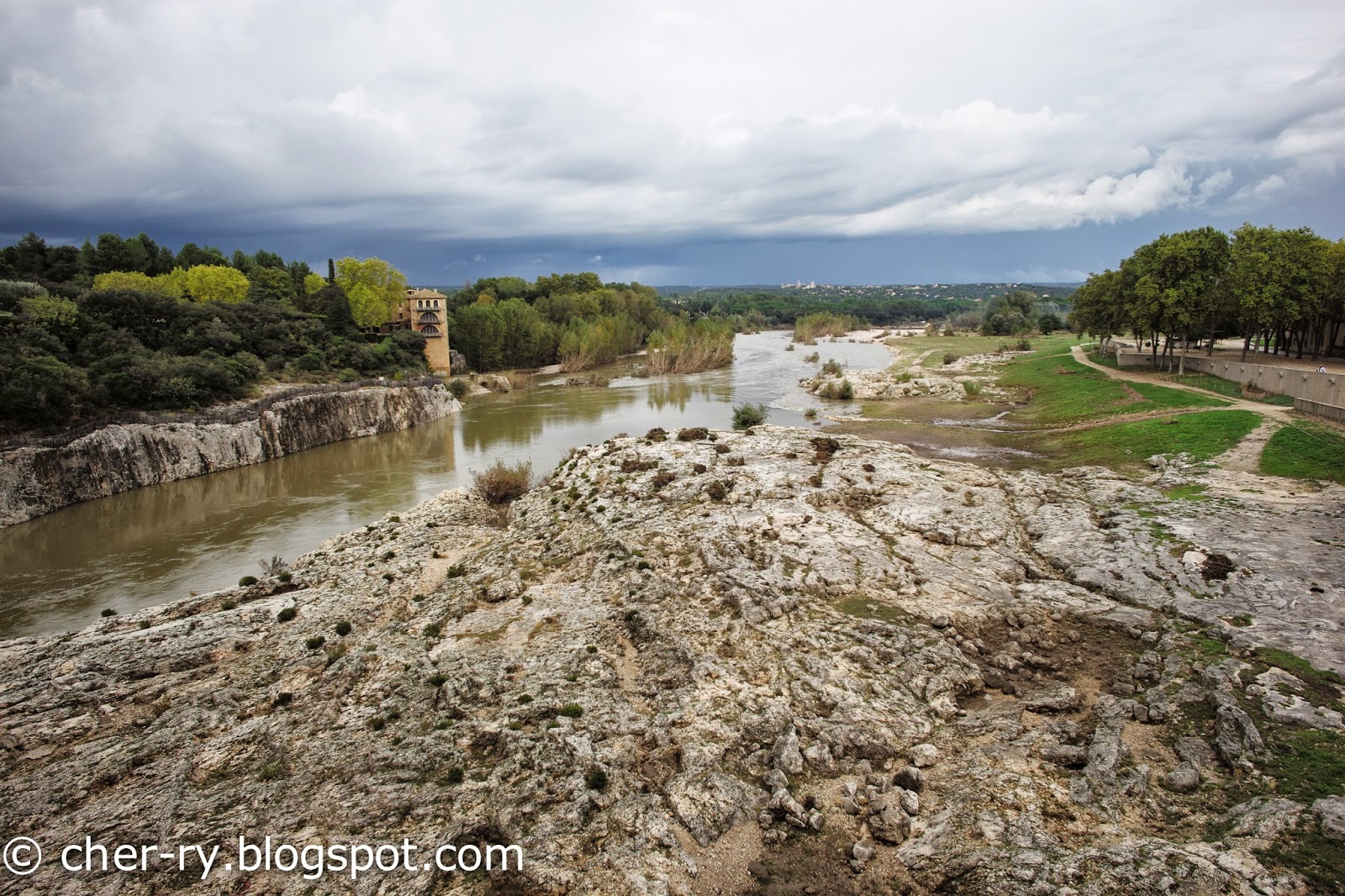 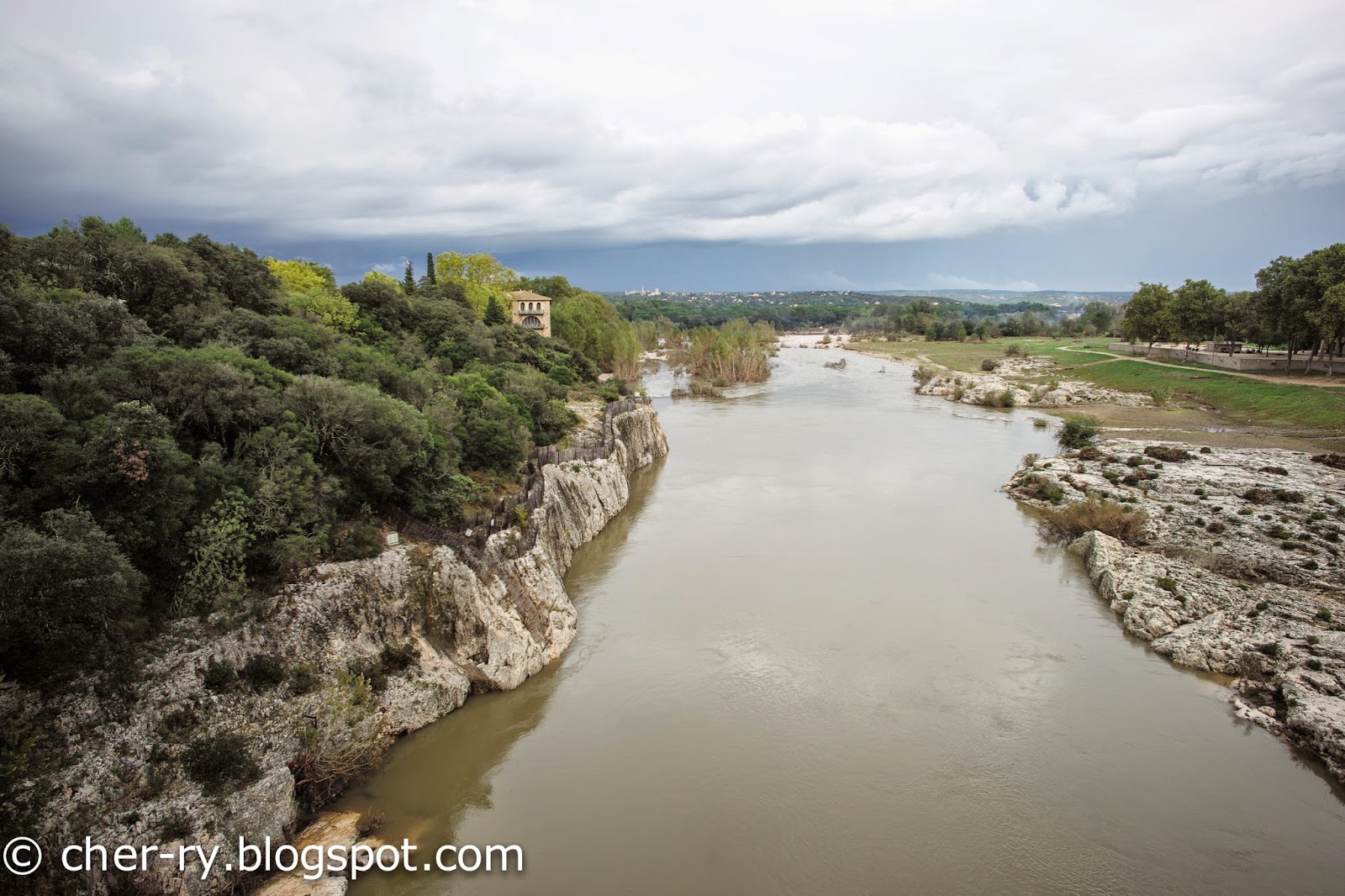 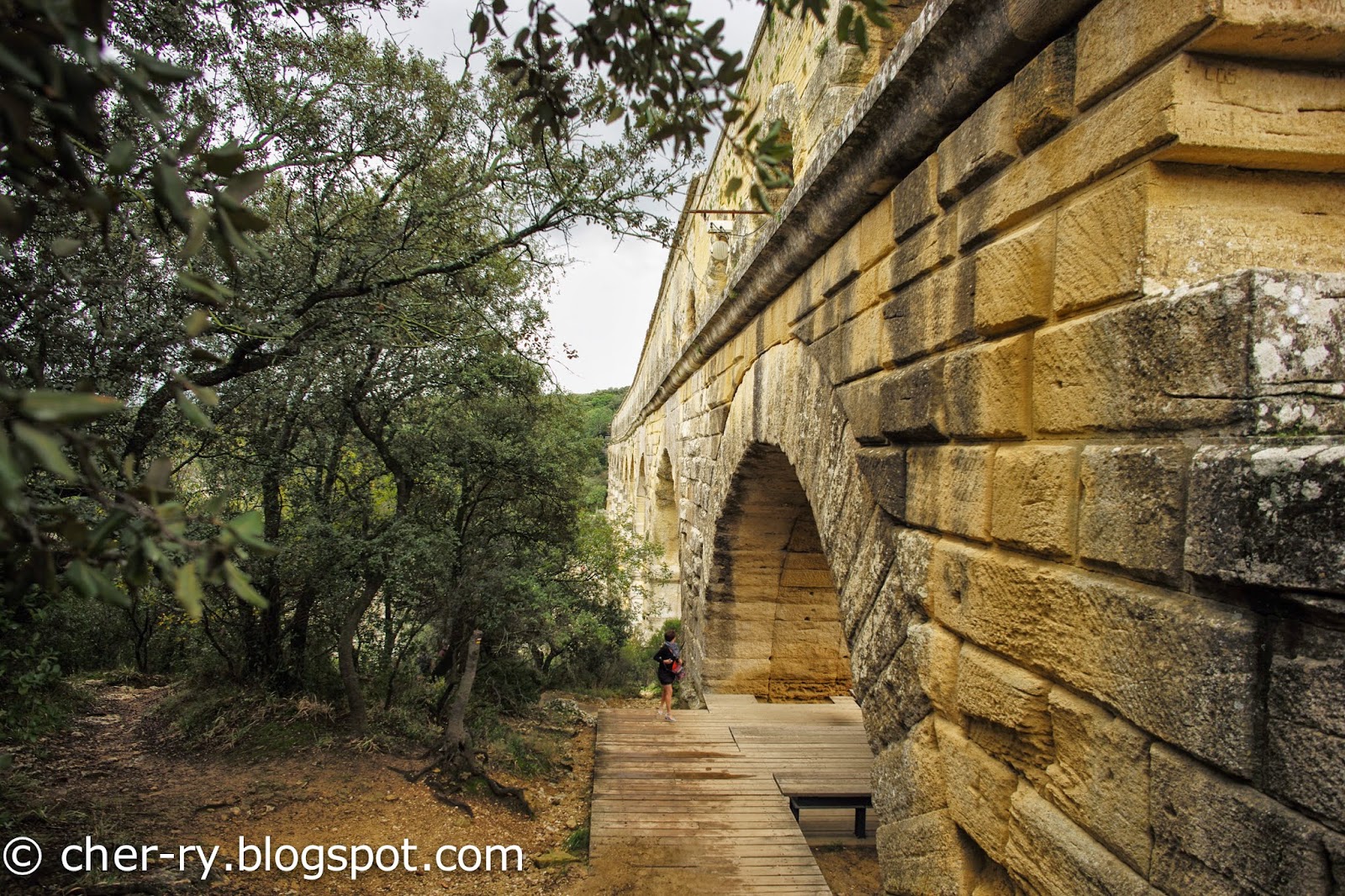 No matter how great engineers the Romans were, there was still imperfection. notice the deformation? oh well I guess after a few thousand years there would be changes. 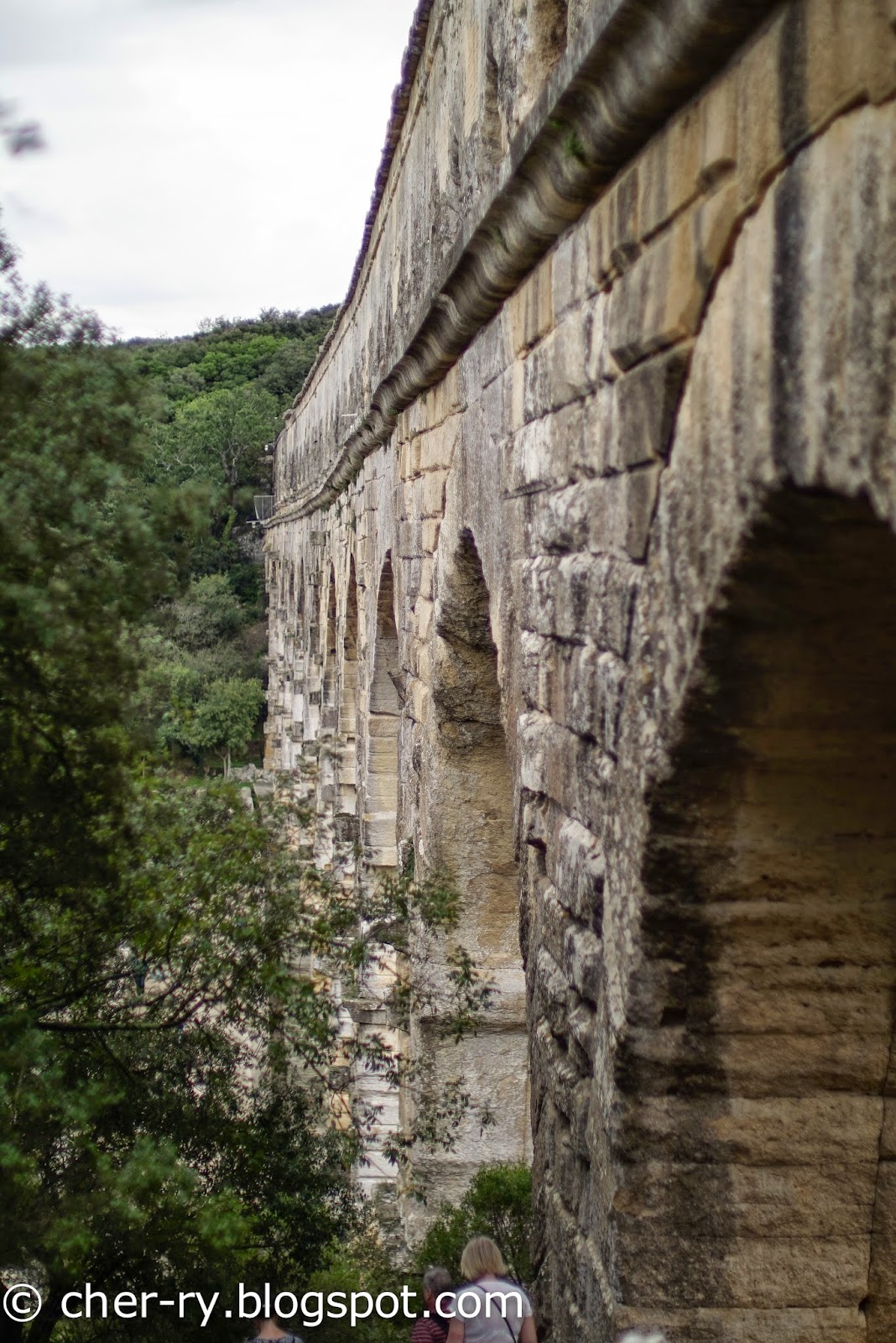 A closer look.....but don't forget this aqueduct was built between 40-60 AD and has survived numerous earthquakes and natural disaster. In addition it also has got two tier! 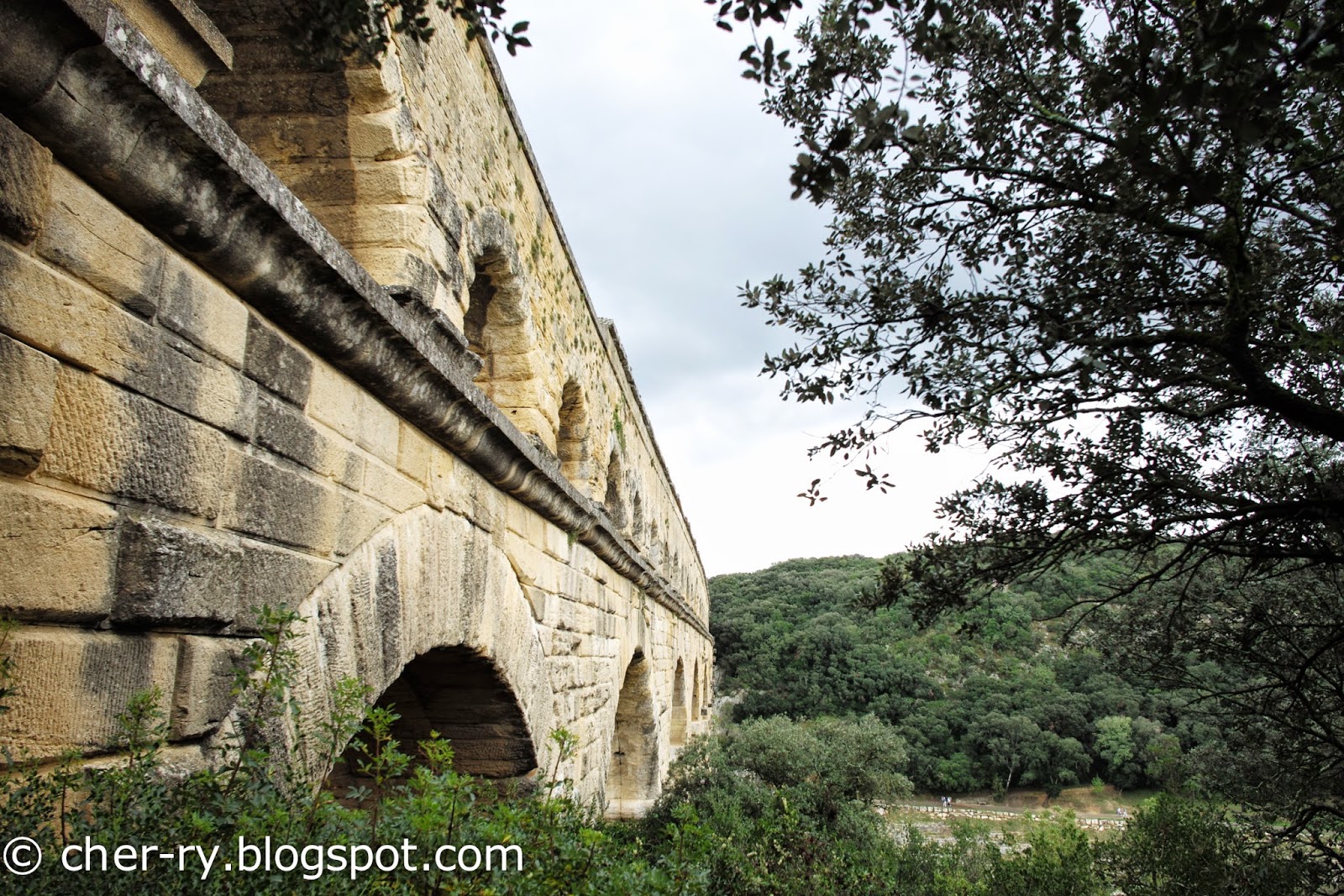 On Plan (viewed from the top), the aqueduct had a slight curvature probably to facilitate linking the two ends across the river. The construction must have been one of great complexity and is testimony of how great Engineers and problem solvers the Romans were. Looking at the scale of such a project and bearing in mind the safety consciousness during those times, my guess is a lot of workers died while building the structure. 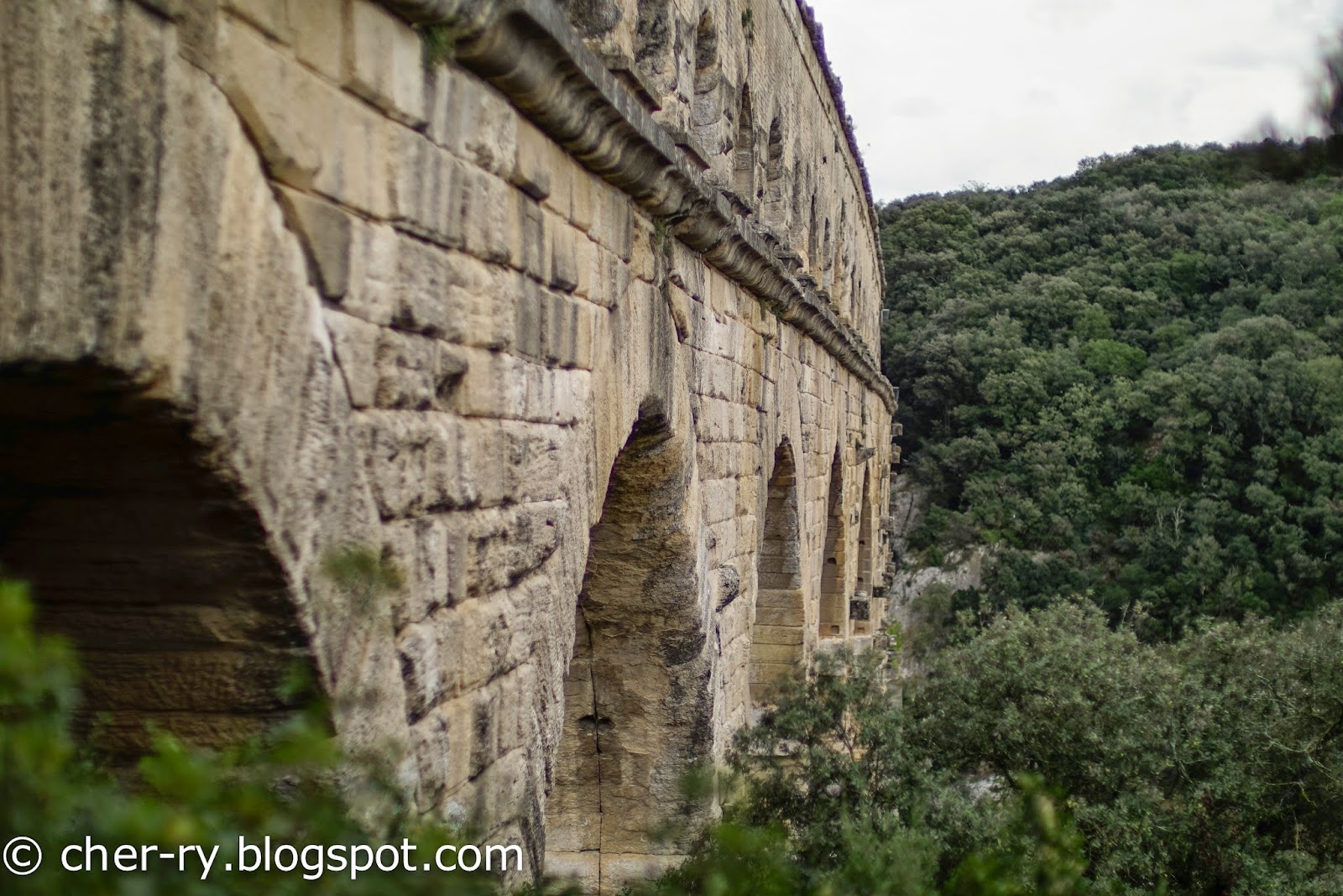 a lil closer look at the curvature. Do take note of the "key stone" too.

I was fascinated by this ancient engineering but nothing beats Mr. JS who's an engineer himself was even more fascinated. His expertise while in university was the construction and calculation of bridges and spans and oh well I forgot wat u call them. So both of us were standing there in awe, speechless as our sweetest driver was also in awe snapping pics with his phone. hahahahahaha. 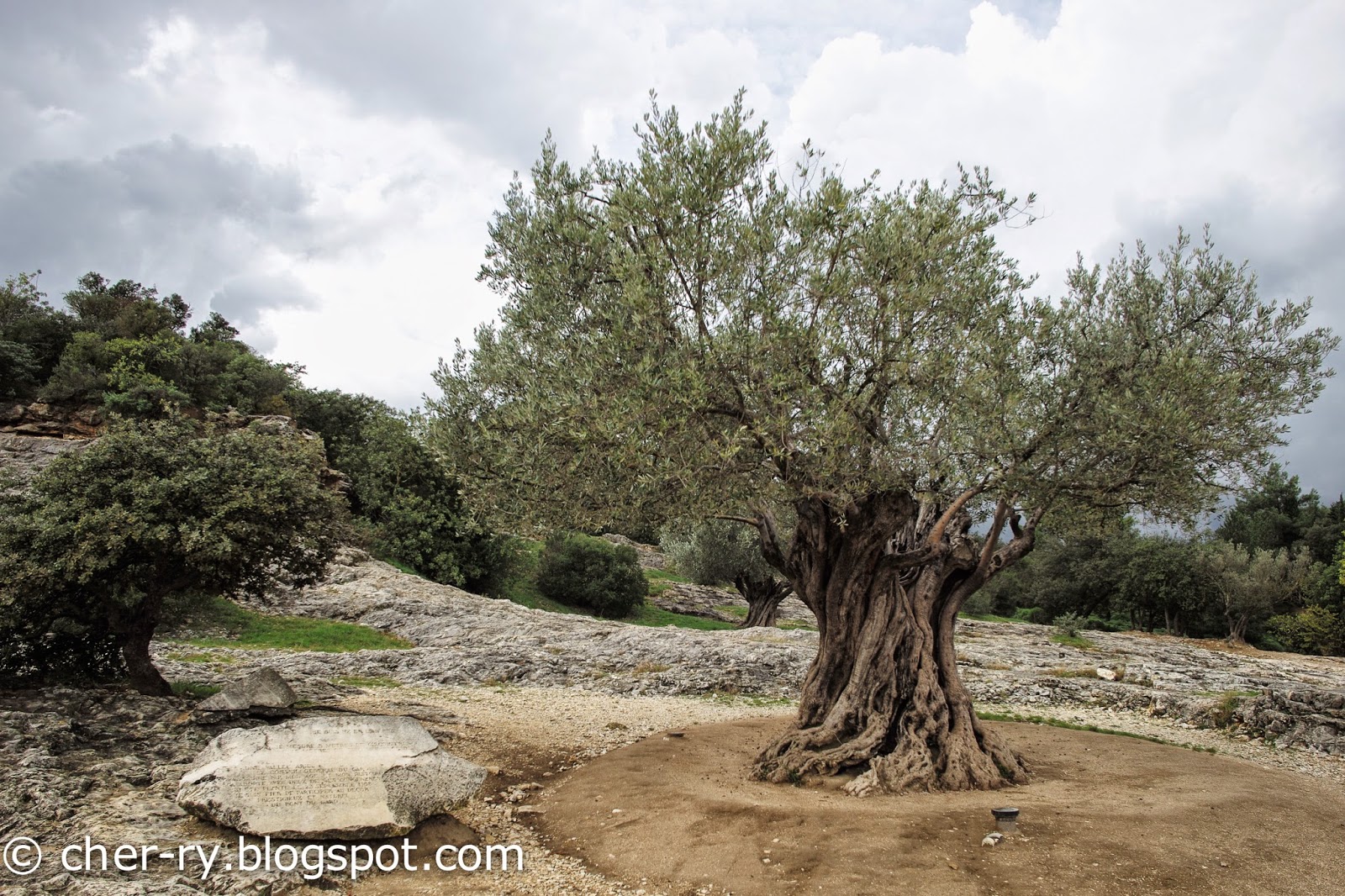 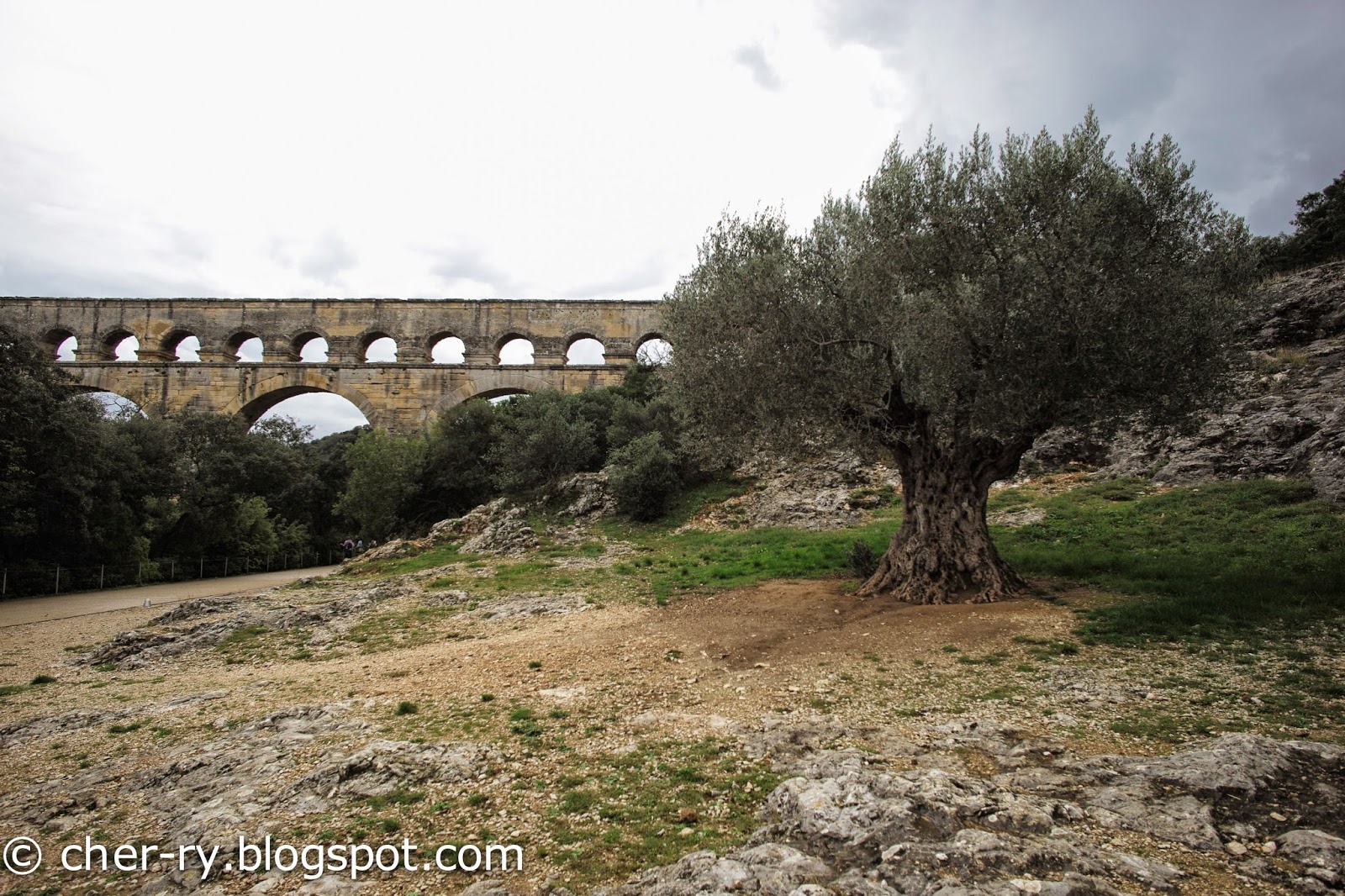 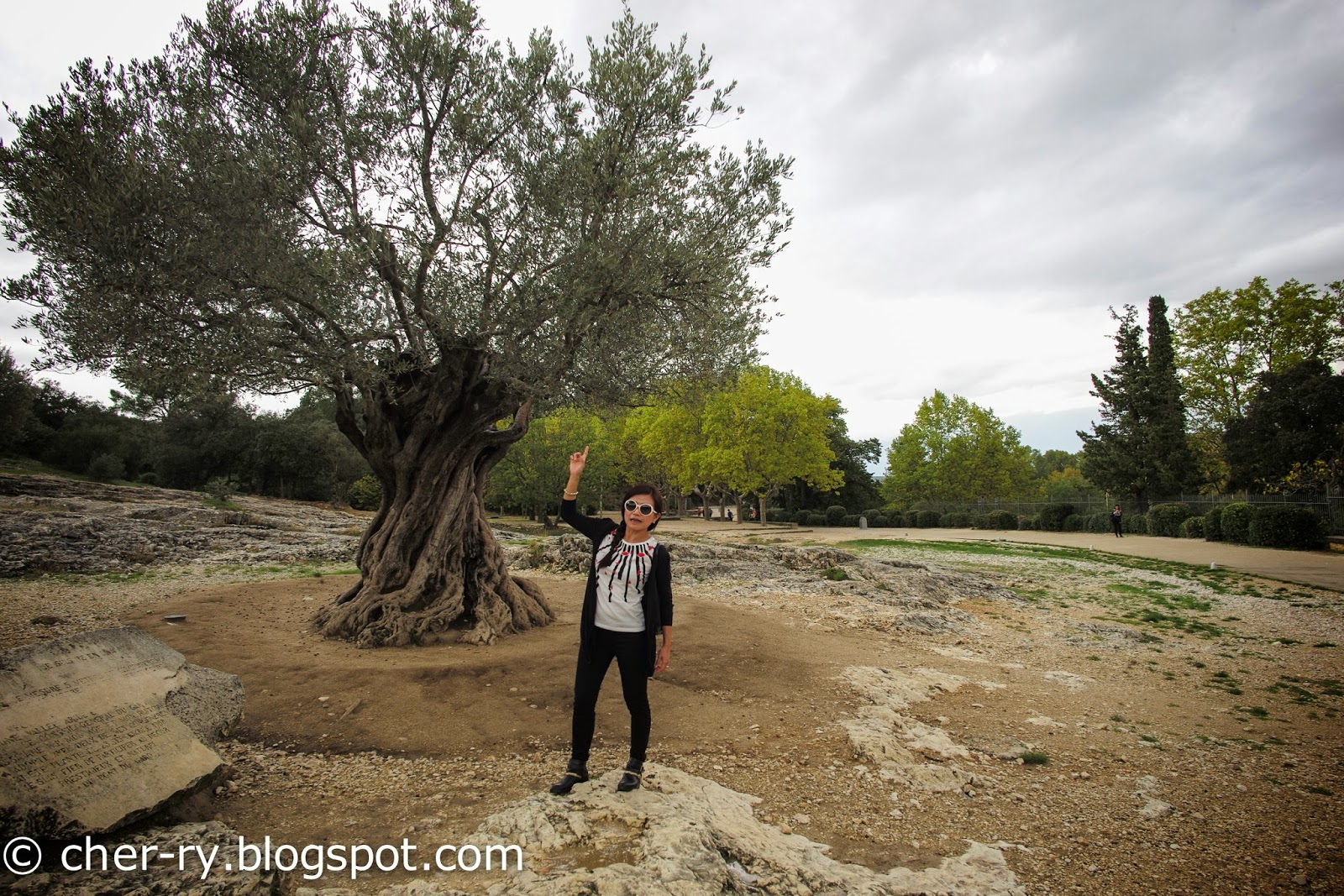 A lone olive tree that is probably as old as the Aqueduct!! Being so far south and having a warmer climate, the Romans also planted a lot of Olive trees to extract the oil within. By the way, this tree is still producing olives fruits today! 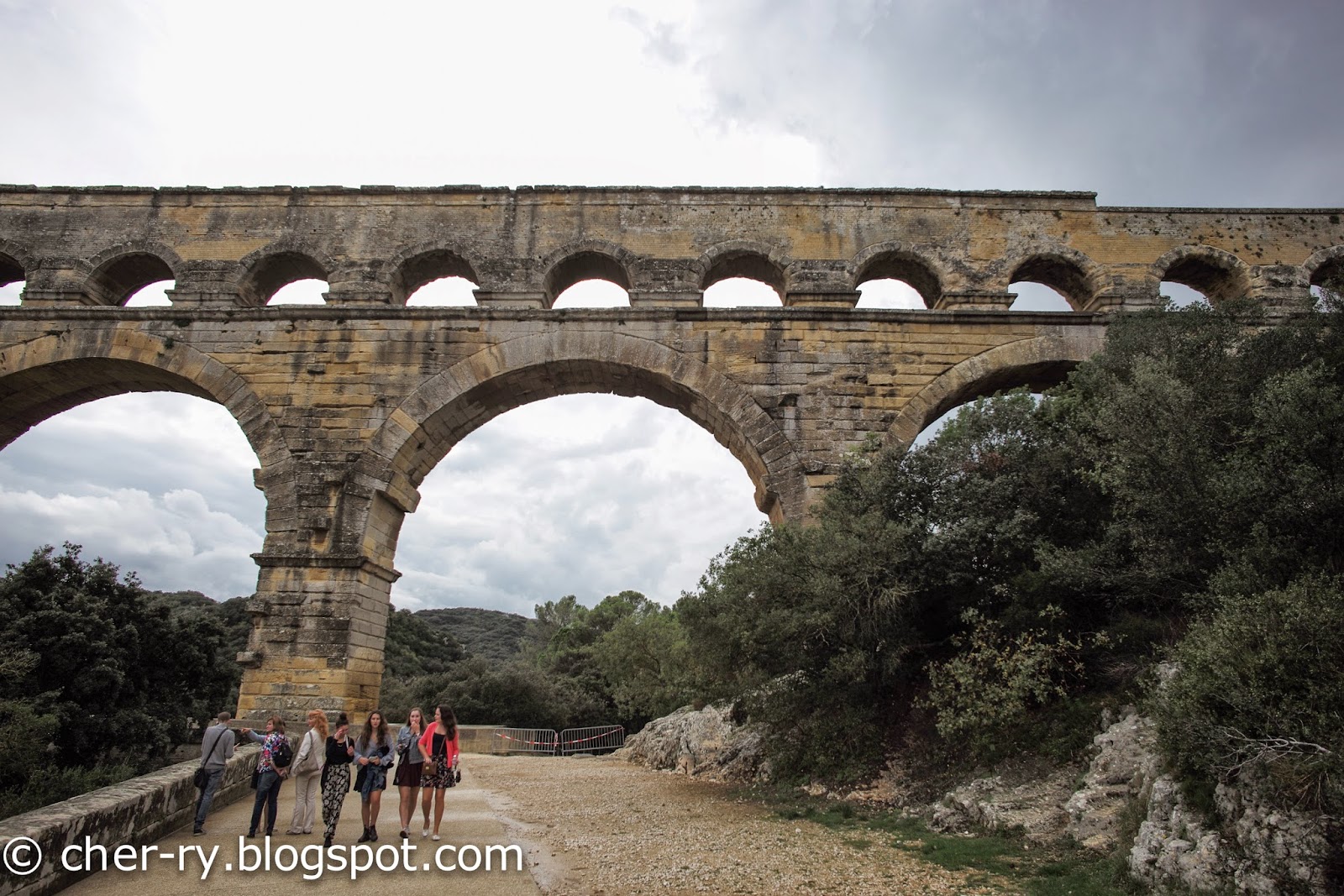 Arches were regarded as a "stable' shape. Its a common shape used throughout the ancient civilization in bridge construction. The principle of a continuous arch in this case made use of the neutralizing force create by the horizontal thrust exerted by the next set of arch which resulted in a very stable structure. If you look carefully at the top of each arch, you can see the "key stone". This is the last piece of stone put into place to hold up the structure. The lateral stability was provided by the thickness of the structure which employed the theory of "middle third law" and also the ability of the whole structure to behave monolithically as one. If any of you reading this post understand all this jargon, then you belong to the same faculty as JS.....Ingenieur!!  :)

the above paragraph was written by Mr. JS self proclaimed Genius Ingeniuer.
-_-" 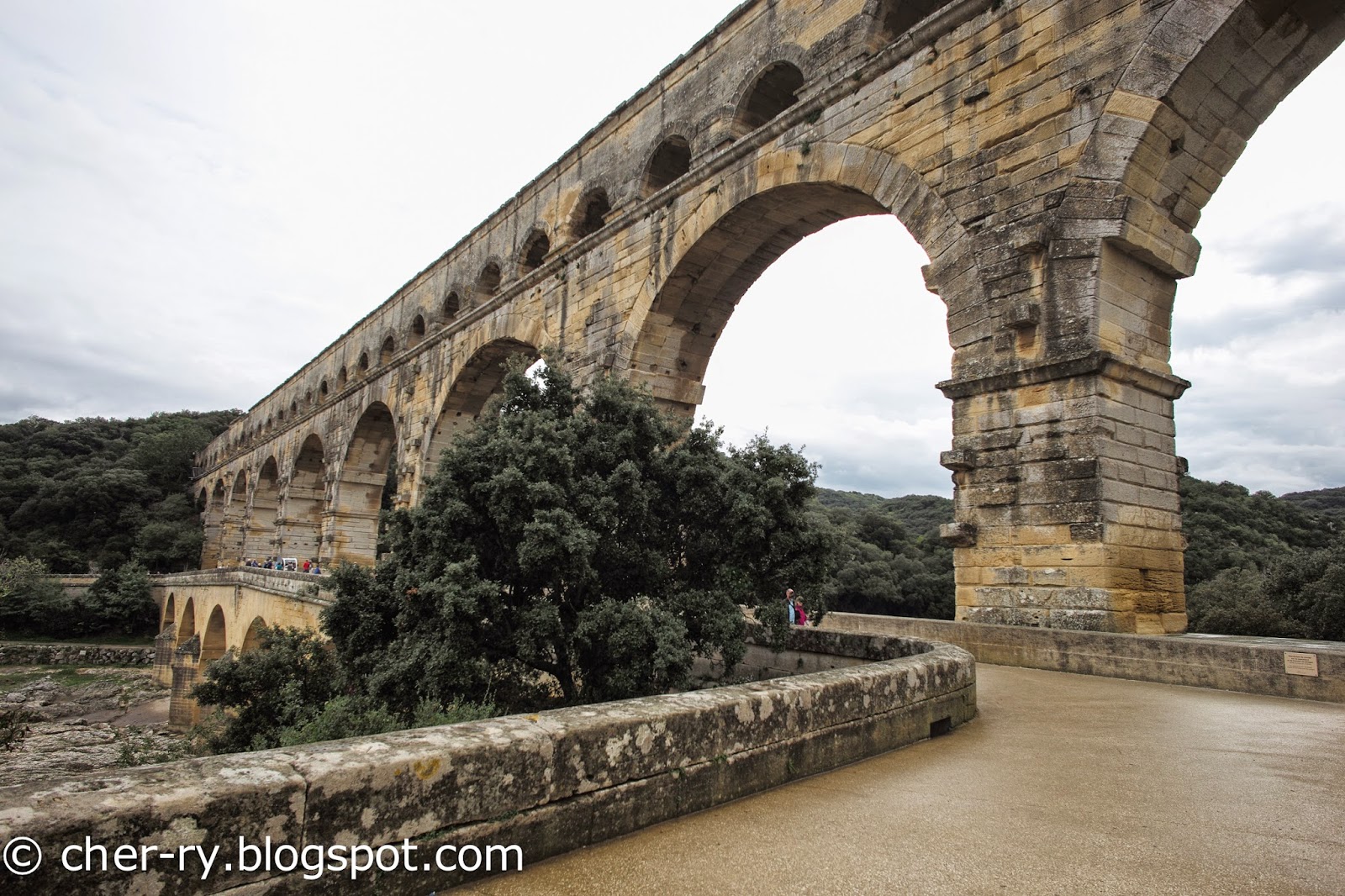 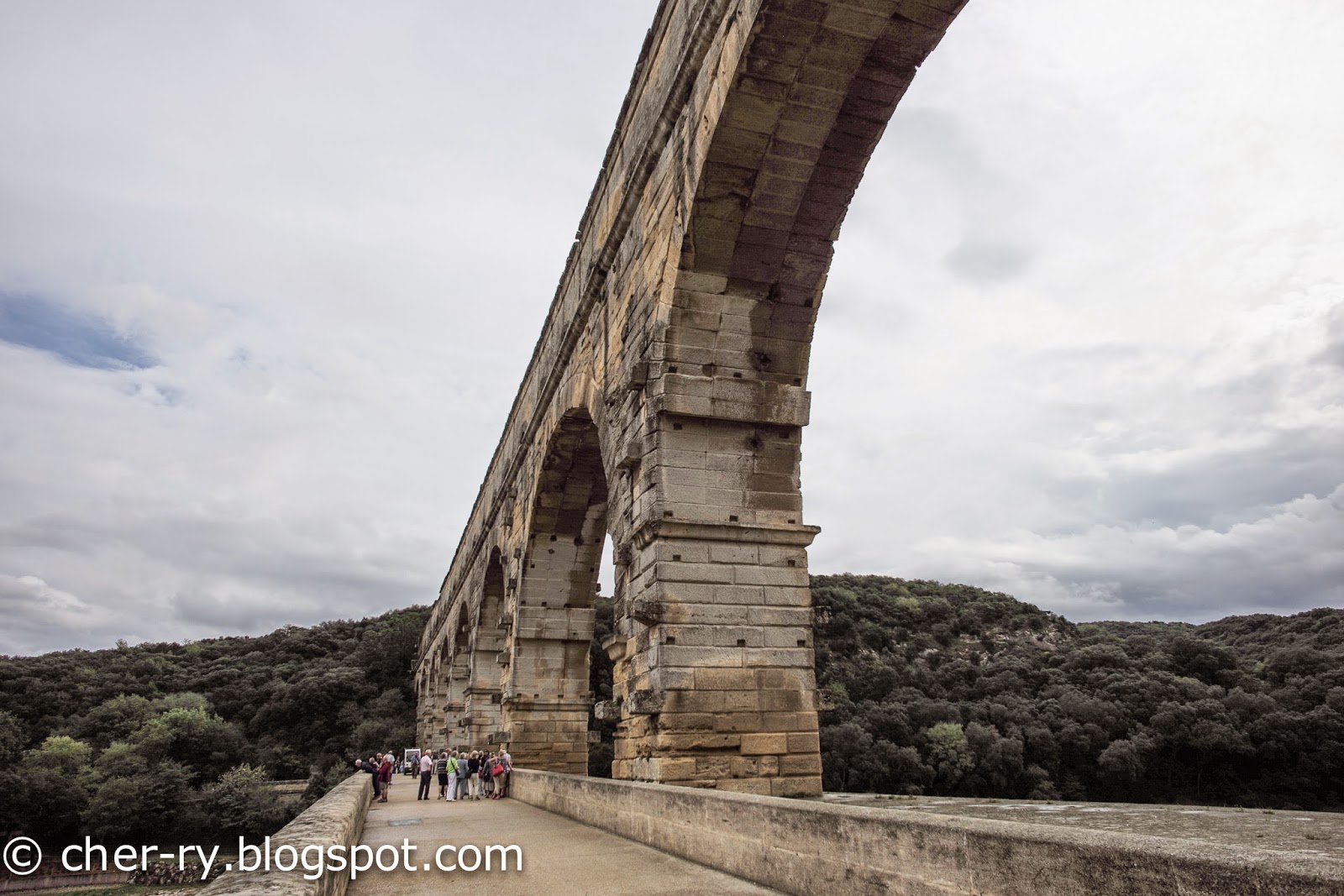 Look at how tiny those ppl were and u'll have a feel and magnitude of its size!!! we were only at the middle tier. Imagine if u are standing at the bottom near the river? 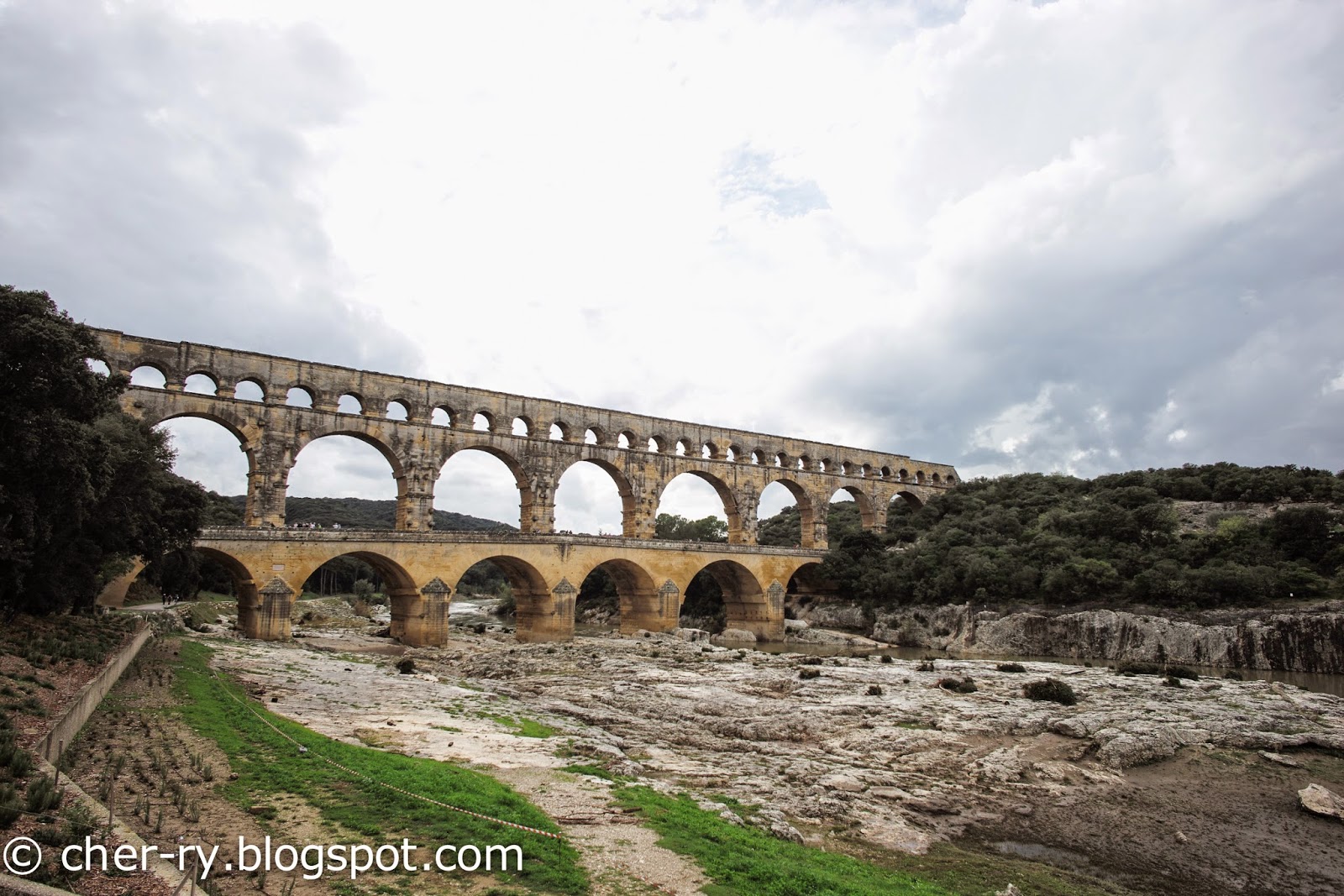 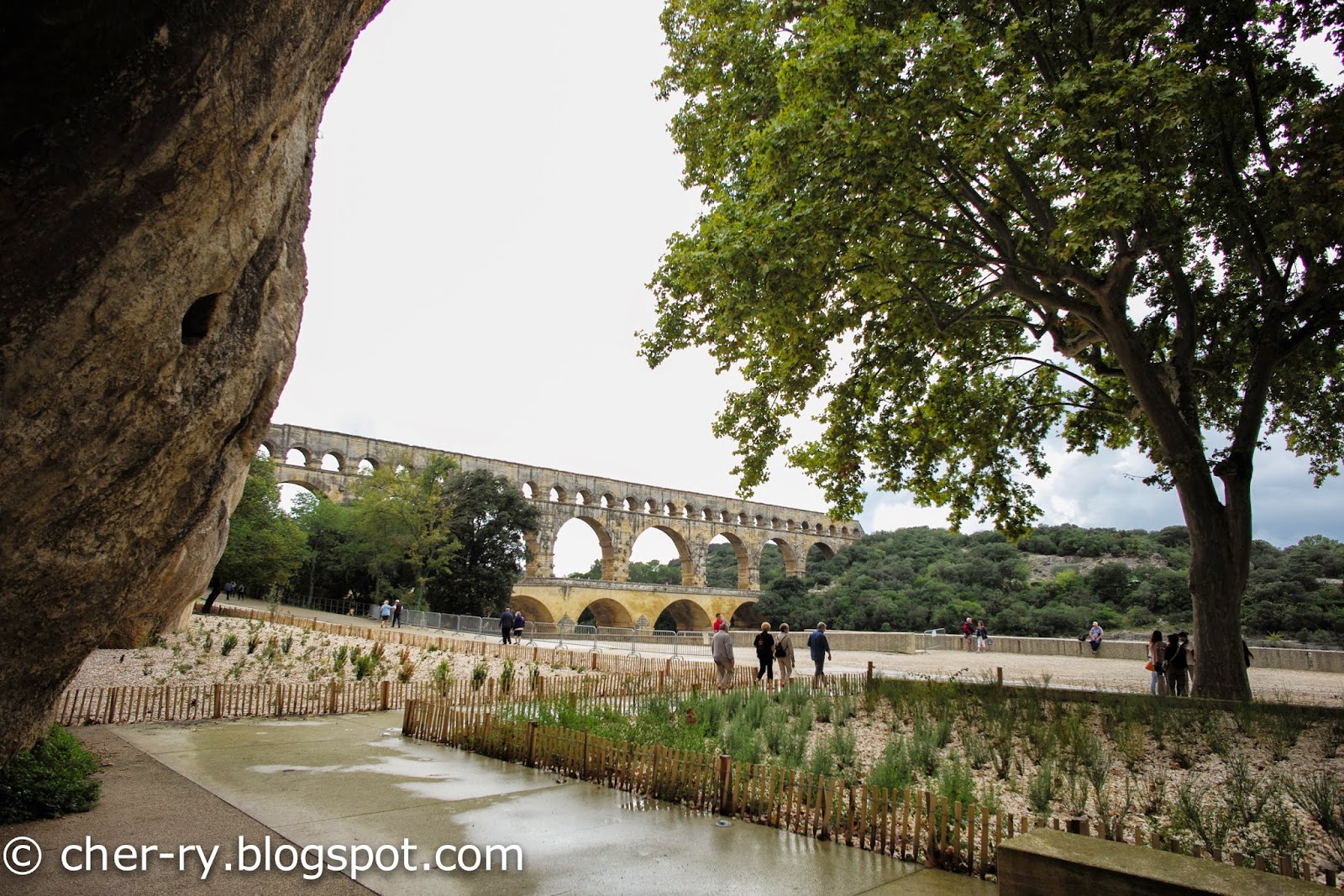 Pic taken fr an ancient cave over looking the aqueduct

We didn't snap pic of the inside of this cave but it's prehistoric dating back to 50,000 to 80,000 BC. Yes it's BC!!!! with paintings and fossils of animals, plants and Palaeolithic tools. 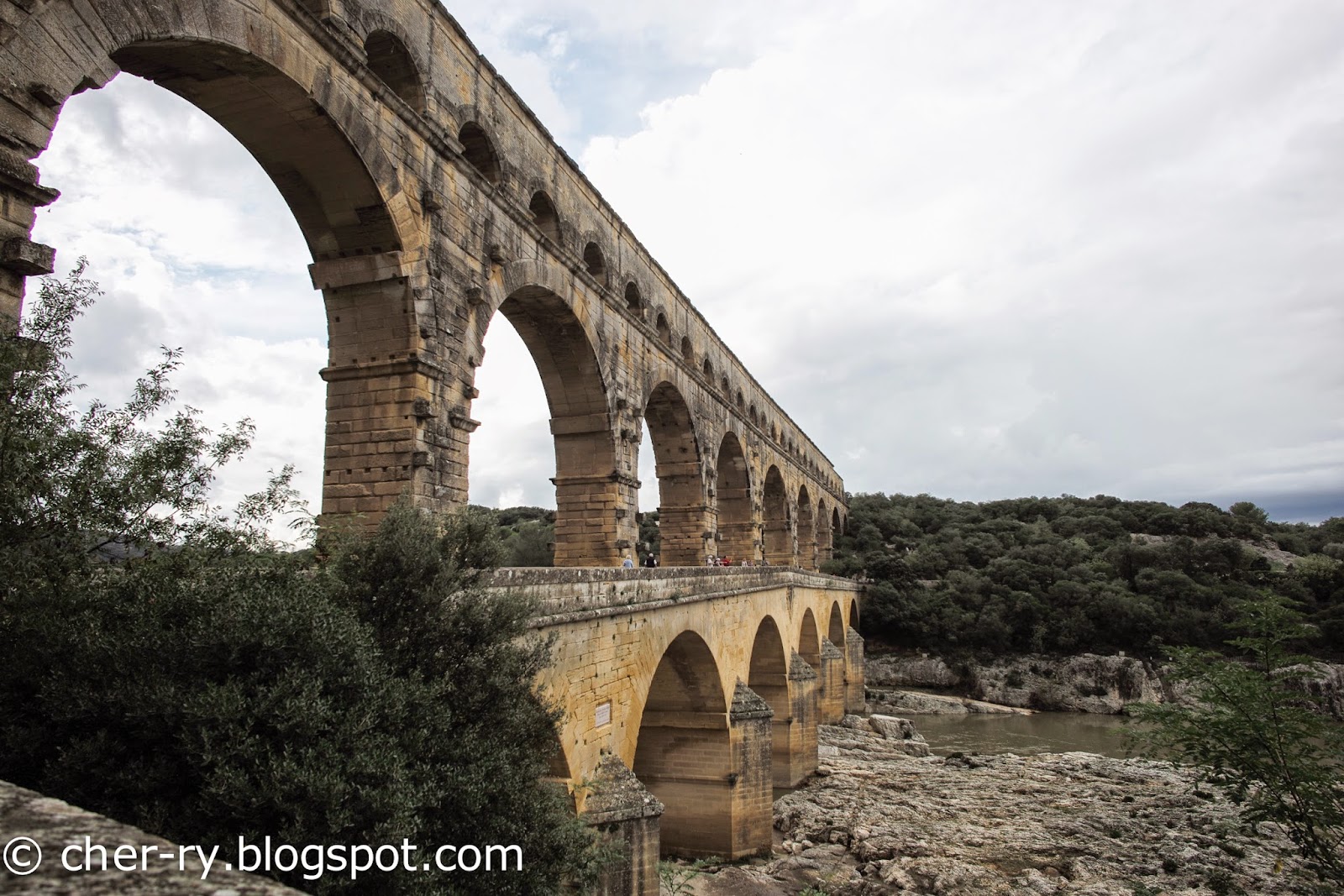 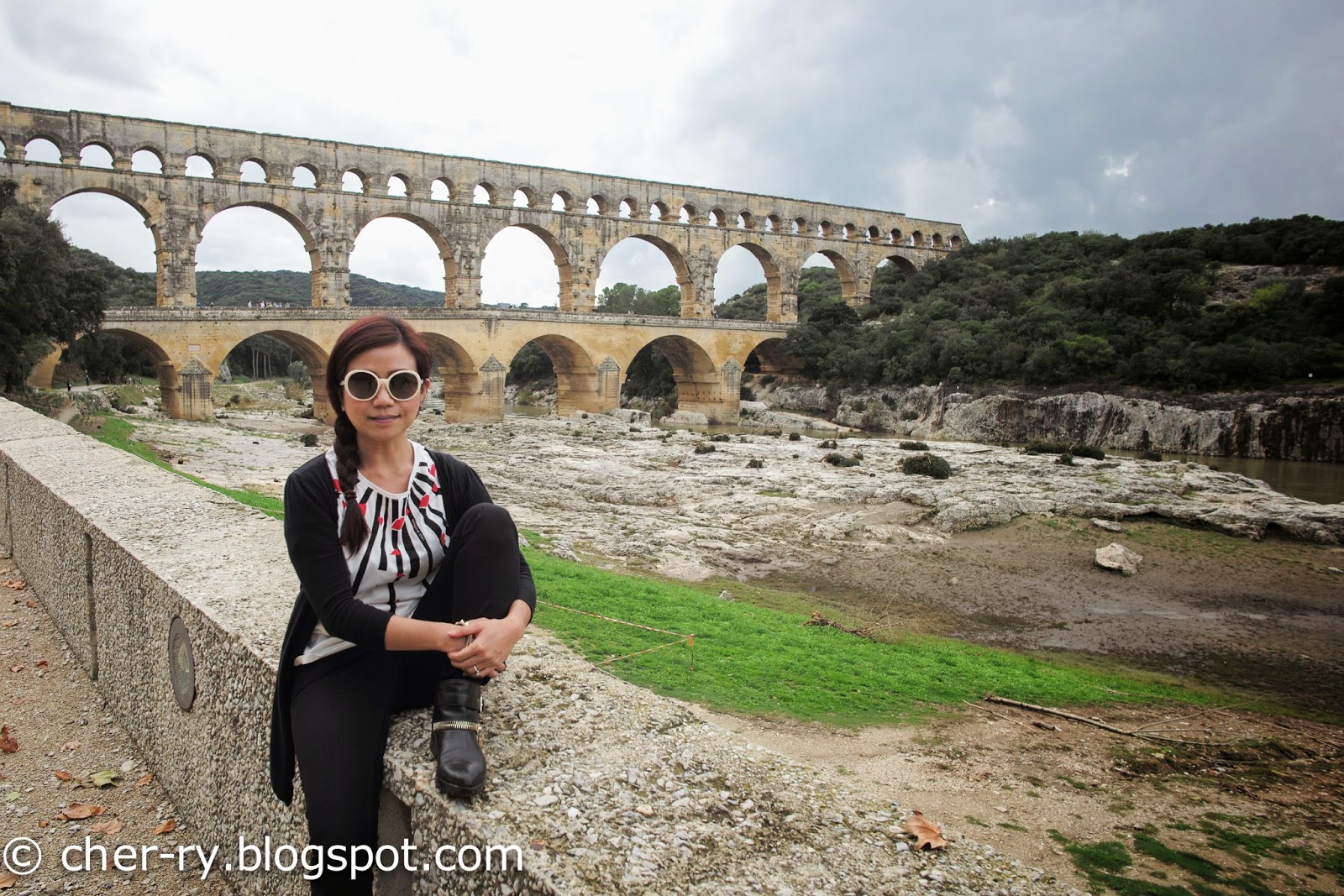 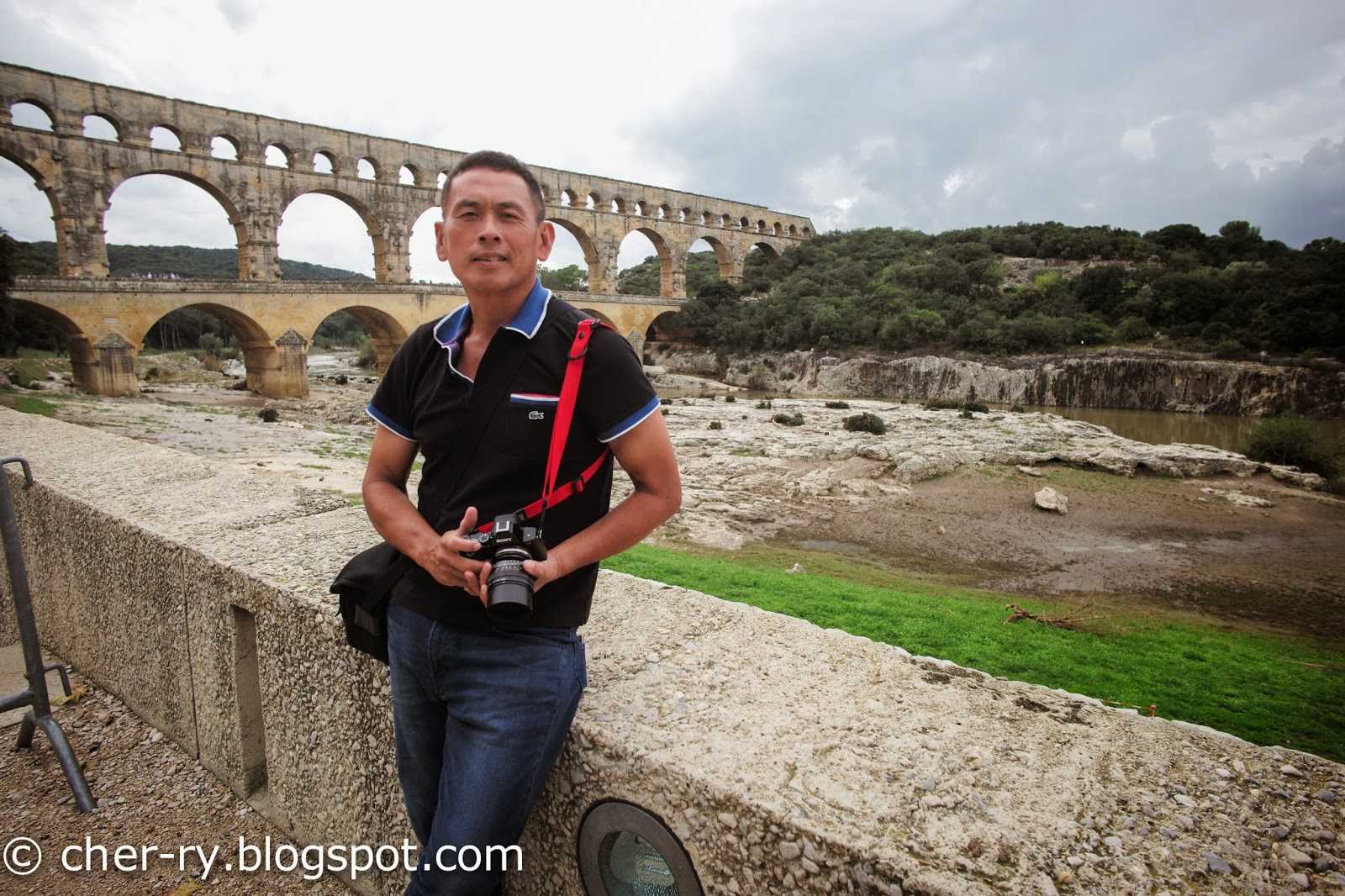 I'm so glad we managed to come here. That means, never ever give up in ur dreams. JS said more like never ever keep pestering. I know I can be very strong minded *more like stubborn*. If I wanna do something I will do it and have it :)))))

Read about the other great aqueduct built by the Romans. We visited it in Segovia in 2012
The Aqueduct in Segovia
our journey in Segovia
Glossed by JS at 9:14 AM