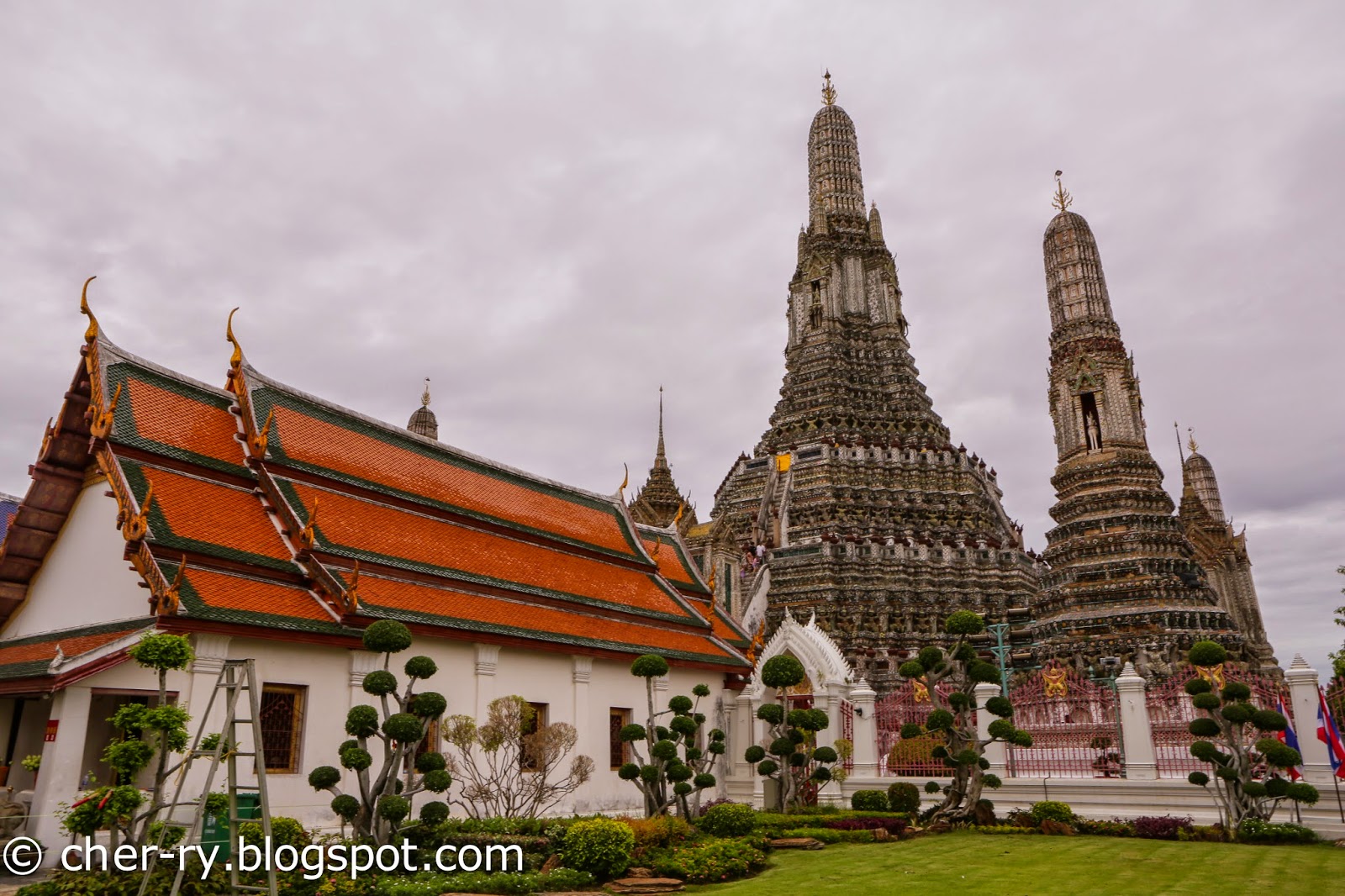 The majestic Wat Arun Ratchawararam Ratchawaramahawihan
I'm not kidding you, that's the actual name of this temple, so to kill less brain cells it's also known as Wat Arun in short.

Built in the 17th century, dedicated to the Hindu God of Aruna, it is the first monument/building that reflects the first light of the morning. Hence the name - Temple of Dawn. 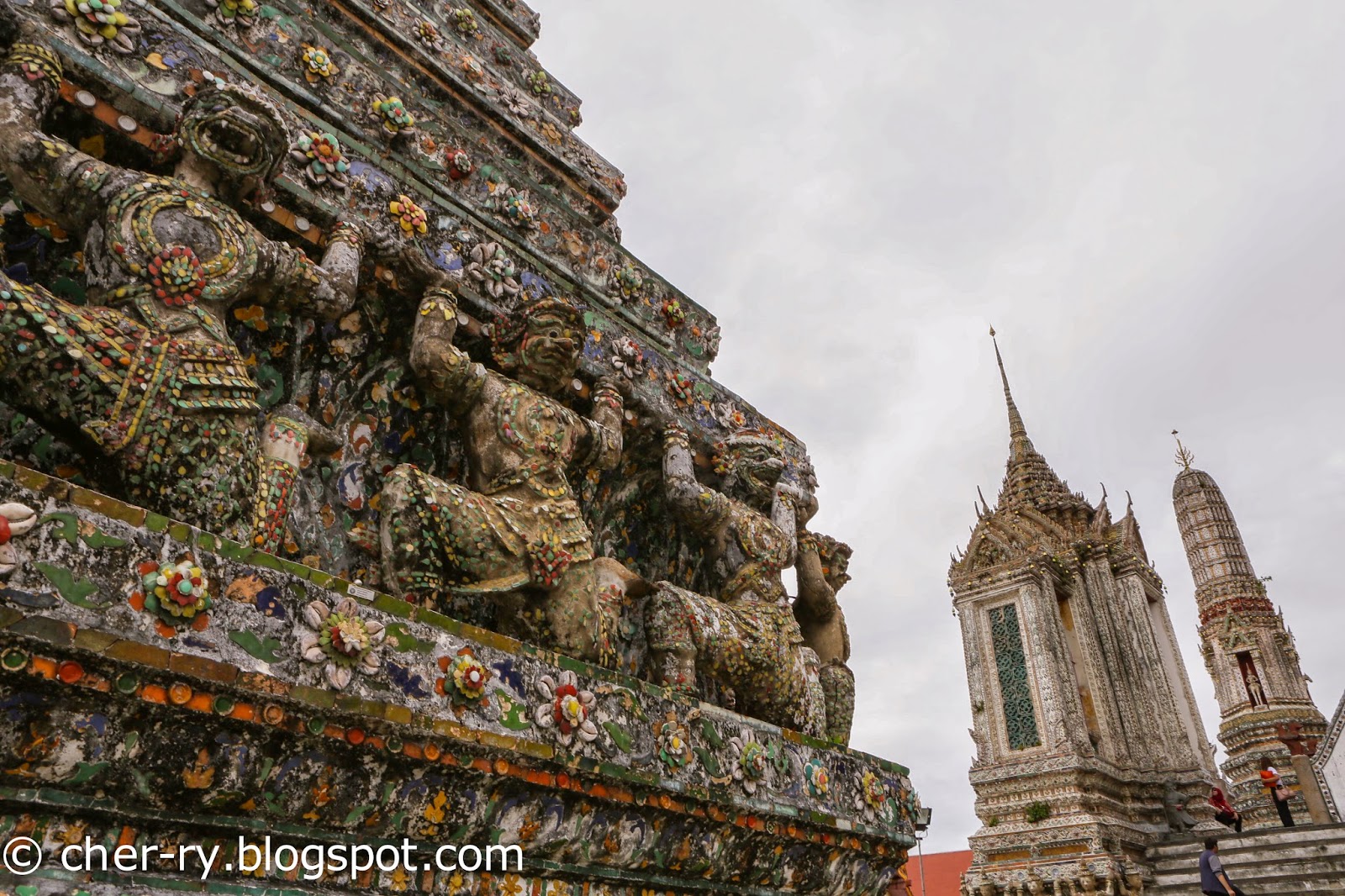 There are so many Yaksa guarding this temple, with them holding all the prangs. The Prangs here are built Khmer style with the main one measuring at the height of 86m / 282 feet. 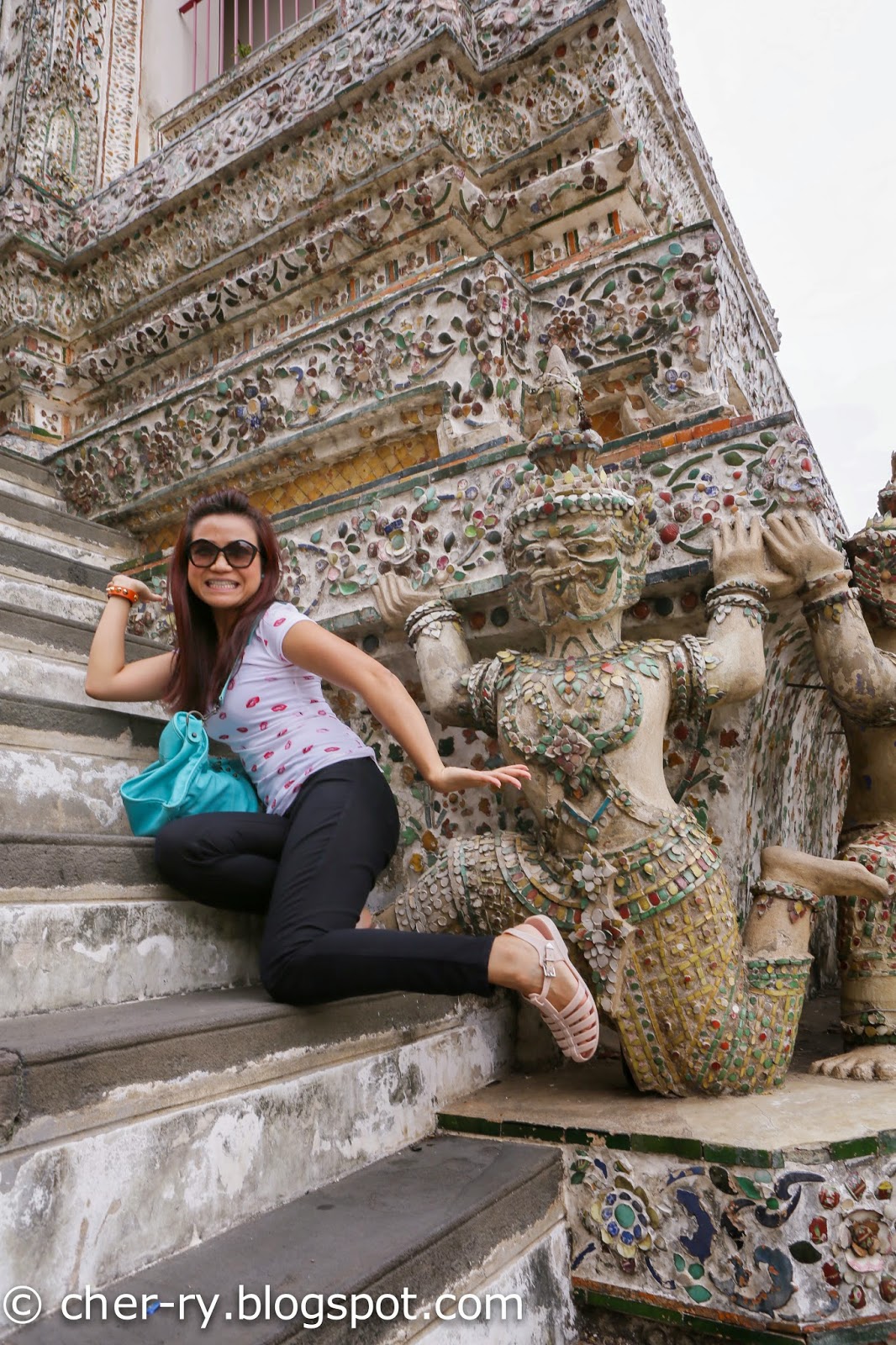 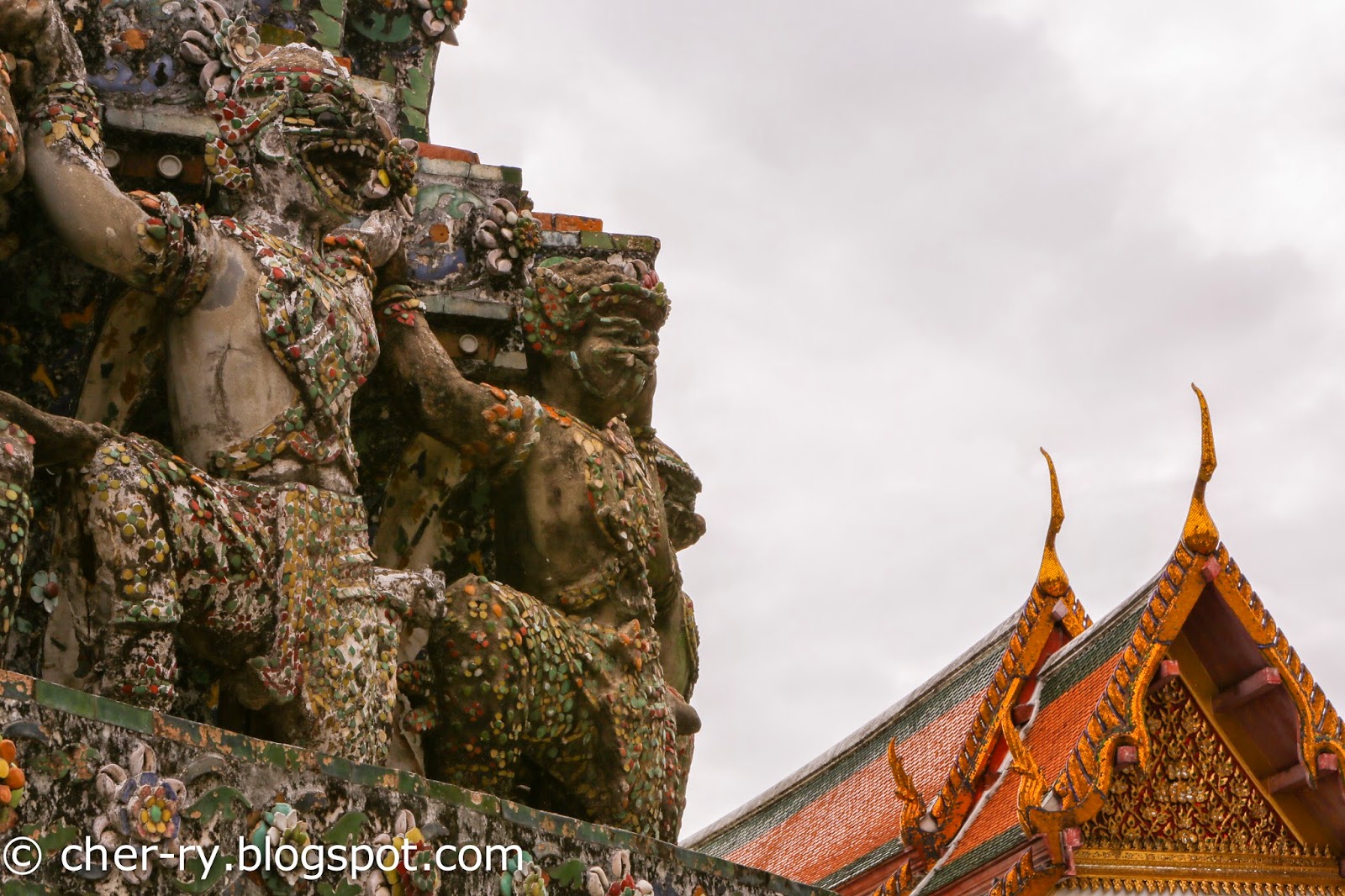 These precious Yaksas were adorned in beautiful porcelains and colored glass. Though their faces looked scary, they are actually caretakers, guarding whatever secret treasure that's hidden here. 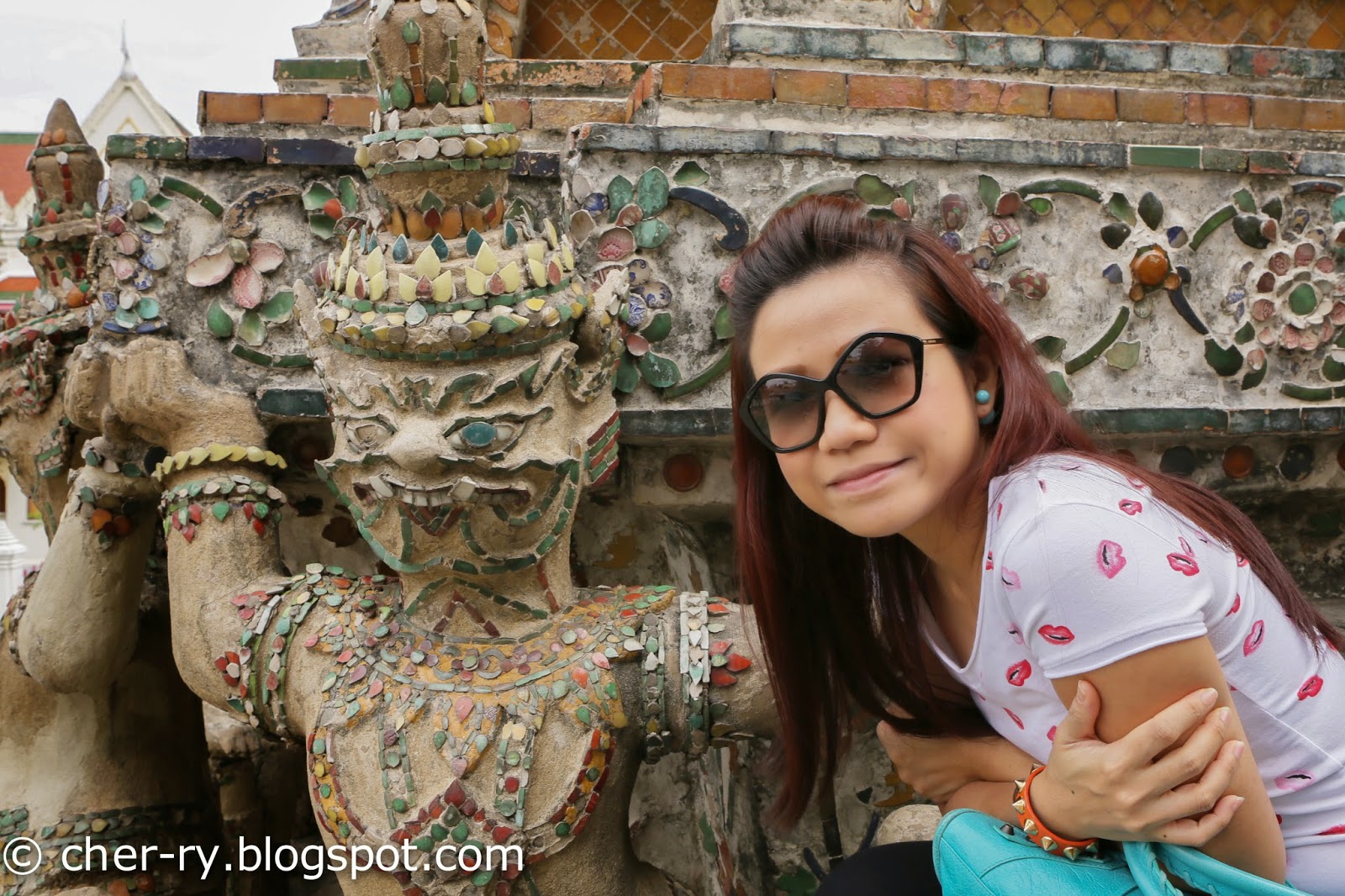 Hello Yaksa....or Raksasa...can u tell me wat u guys are guarding here? I promised I won't tell the rest. Tell me tell me tell mee??? 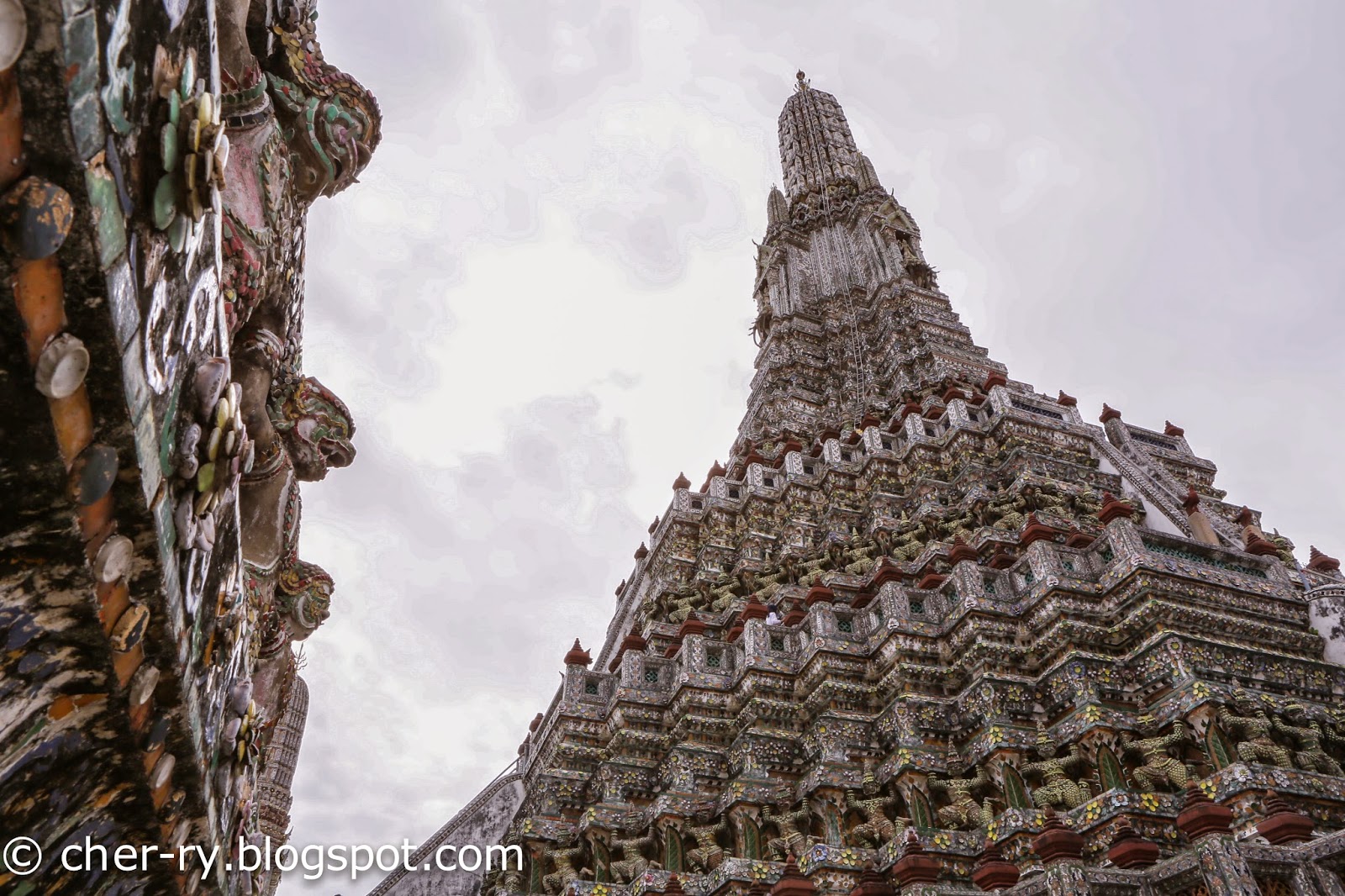 Whatever they are guarding has to be inside the main Prang, standing tall and we had to tilt our neck in pain to have a better look at it. Wow!!!! it's really huge!!! 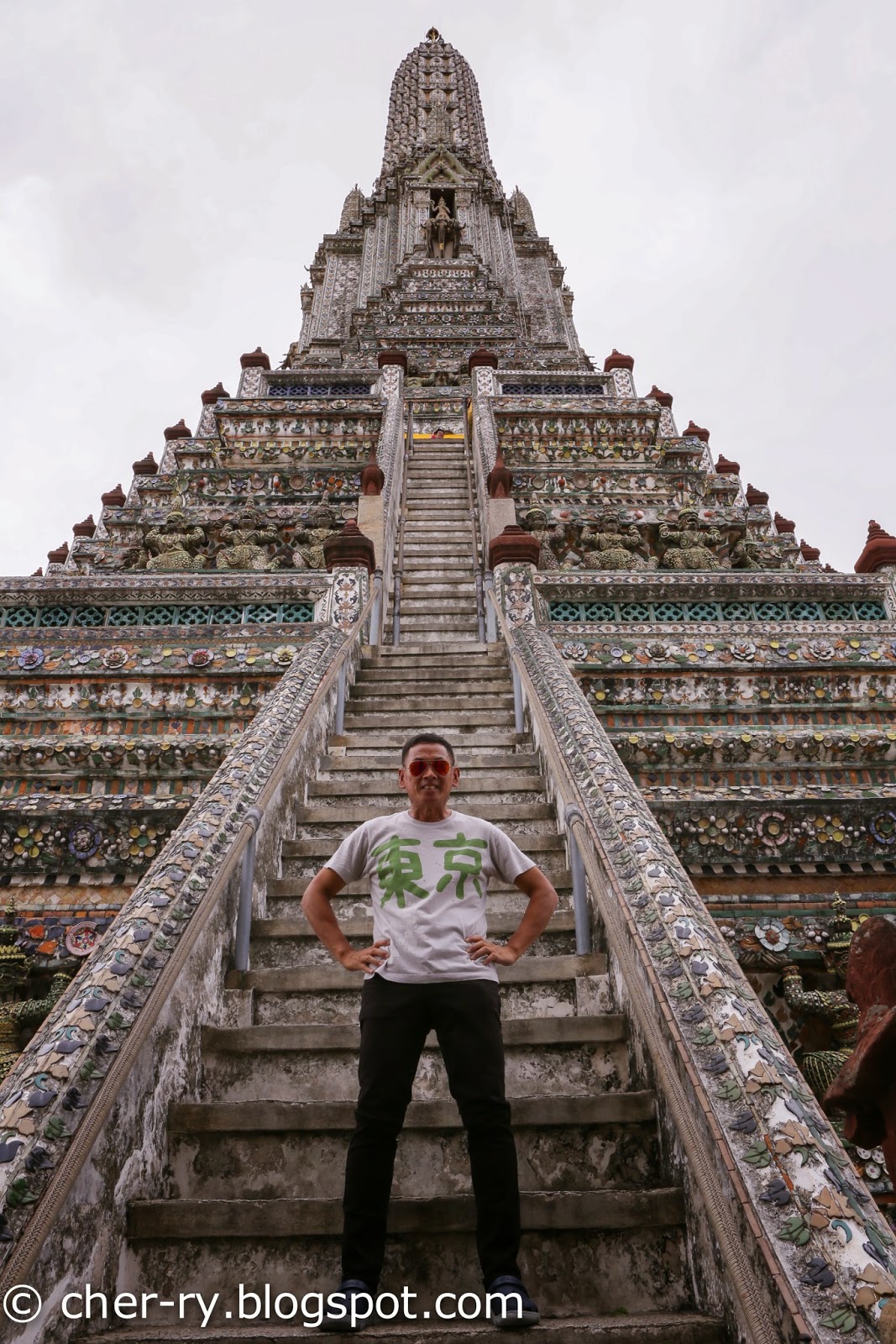 JS said it's time to climb this temple!!!!
I just noticed he's wearing a shirt that says Tokyo.....when he's in Bangkok...hahaha. 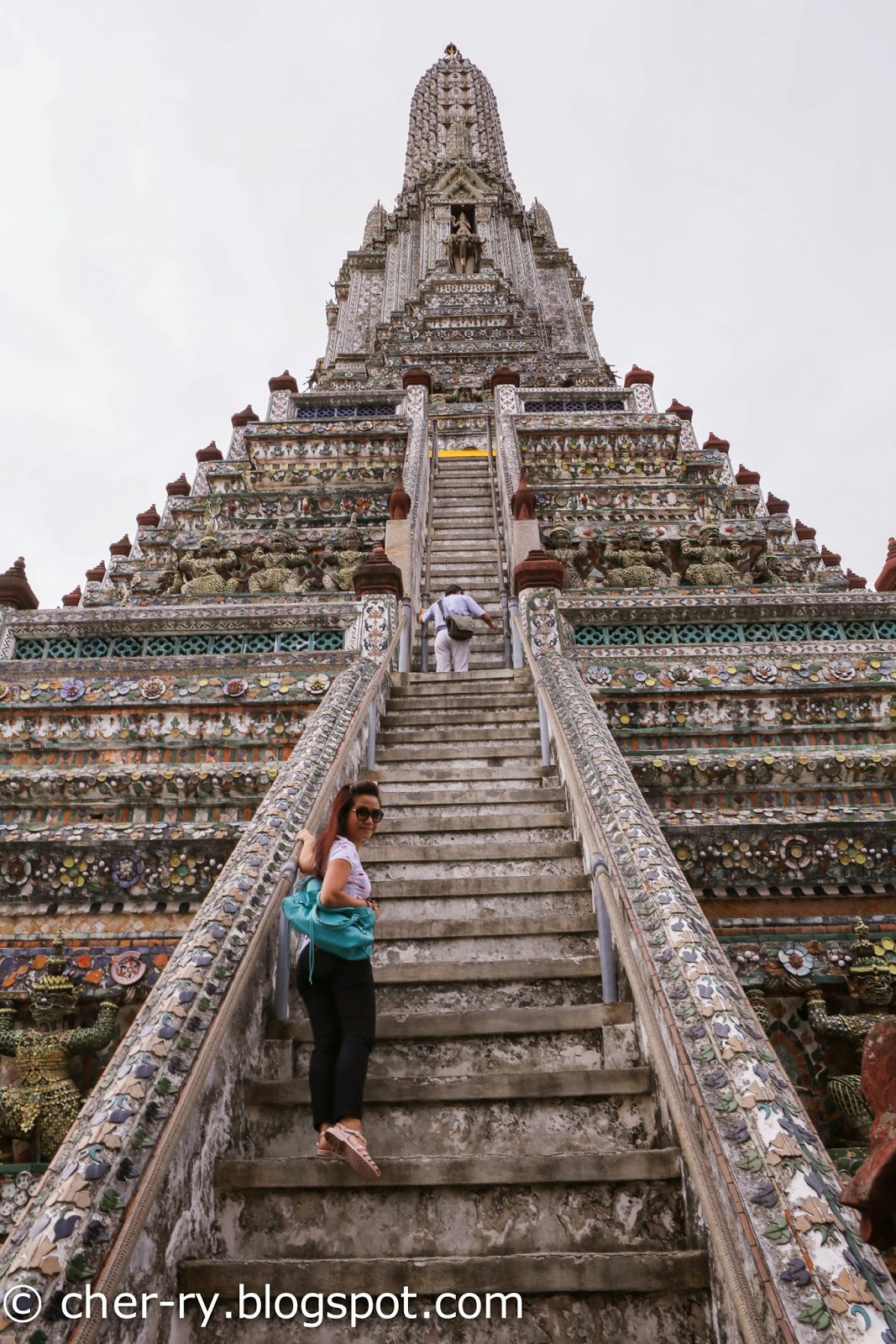 Okie I must say the first tier wasn't that bad, though it's steep it was still climb-able. Huu Haa Hee Haaa up and up and up. 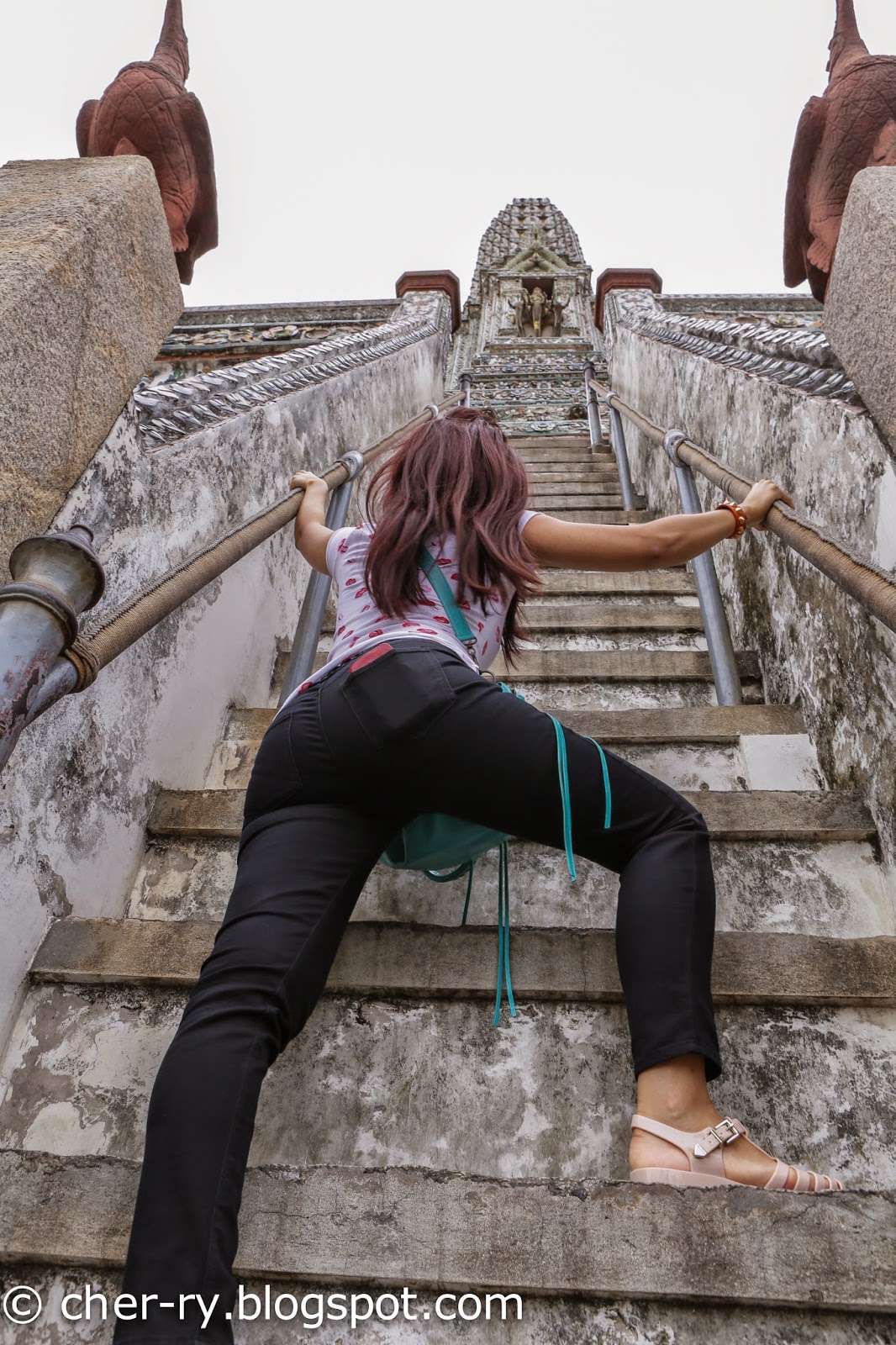 and then the second tier was a killer......
GAH!!!!!
it's like climbing a wall, Each step was high and narrow. I can't even position my one foot onto each step, it has to be put sideways. Seriously it's really like climbing a wall with some steps built onto it.

I couldn't do it, my legs turned jelly for my extreme fear of heights. And like a kid who just dropped his ice cream into the floor, I was so disappointed that I've failed meself.

Oh Lord Wat Arun!!!! what have you done to me??? my hands and legs were shaking, trembling like a cartoon. -_-" 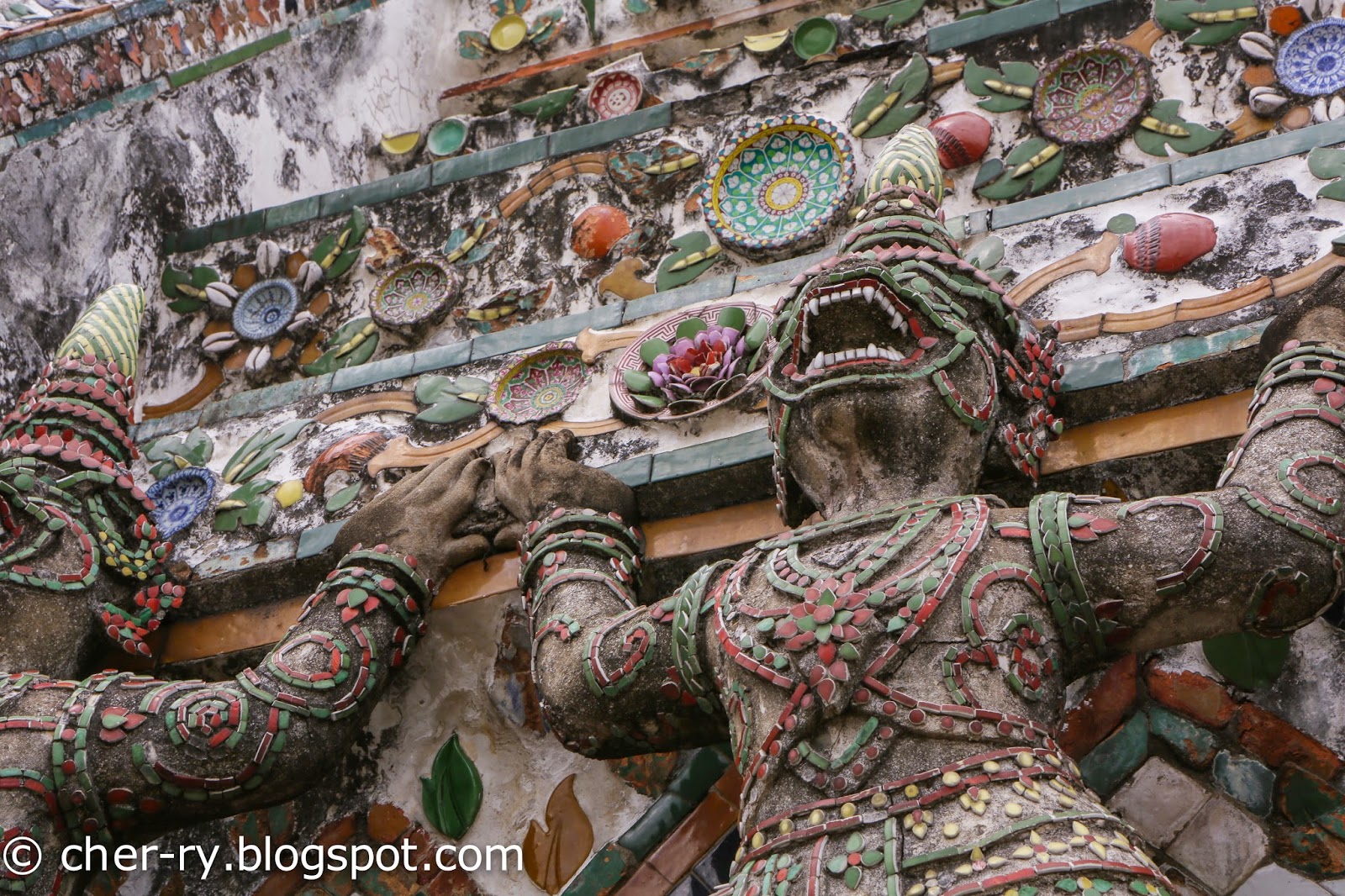 I like the intricate porcelain and mosaic works on the surface. There were some beautifully decorated plates out there. 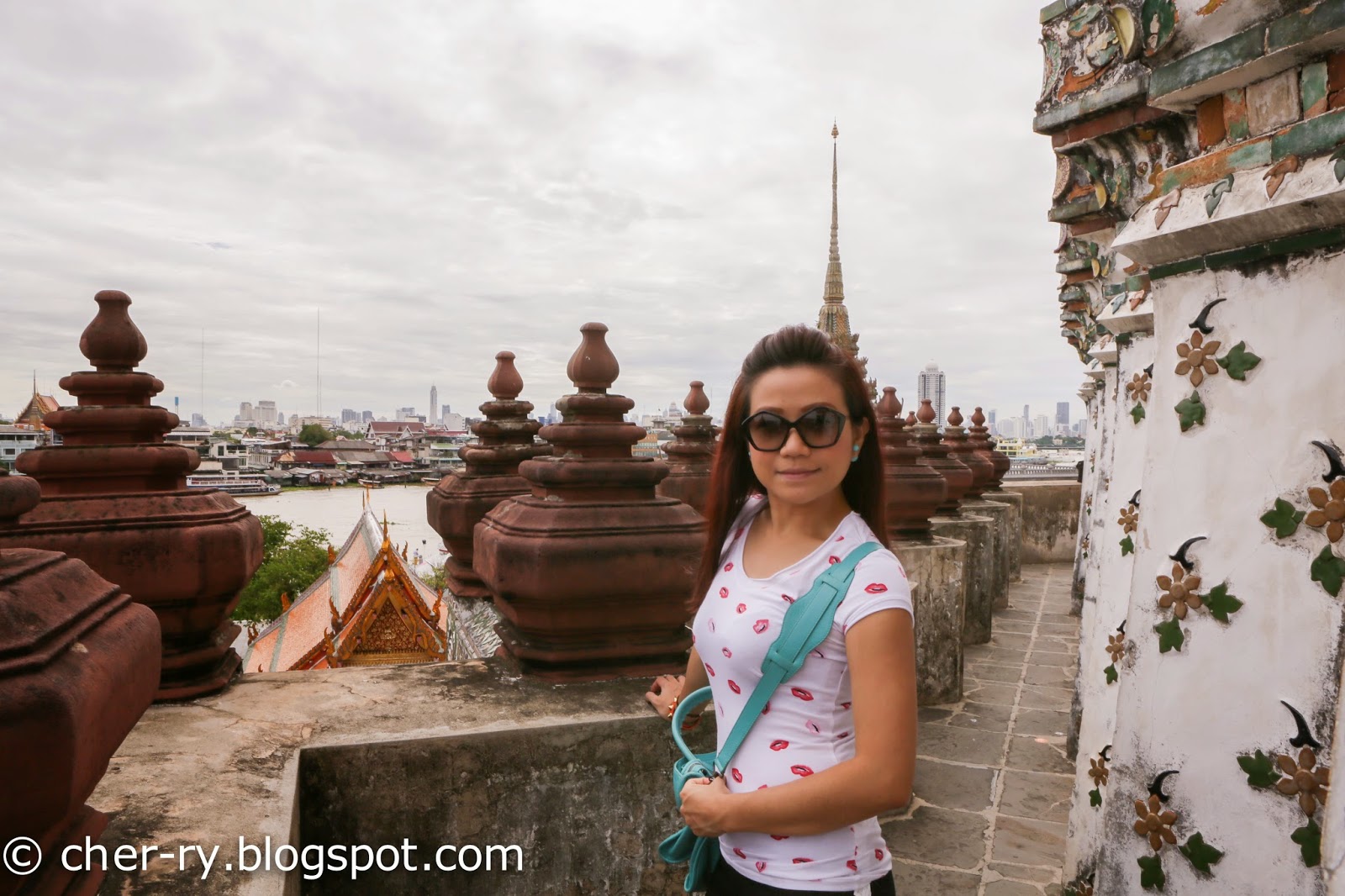 JS then calmed me down at level 1 for just a few nano seconds before he decided he's gonna be a hero and scaled up the steep steps without holding onto anything. 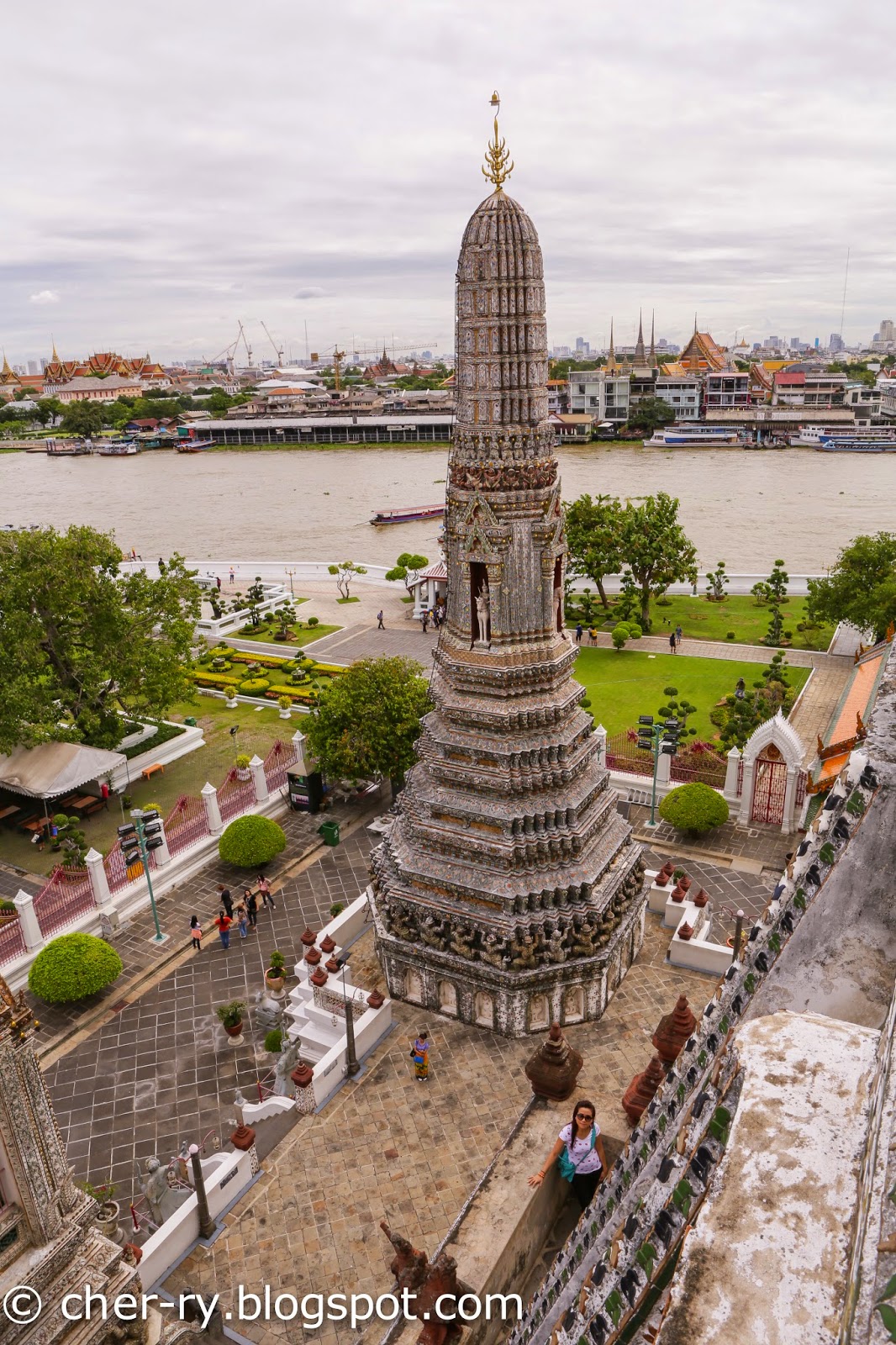 JS had to waved and looked at Monkey then said the top has got the best view in the entire of Old Bangkok. I'm sure it is!!!! 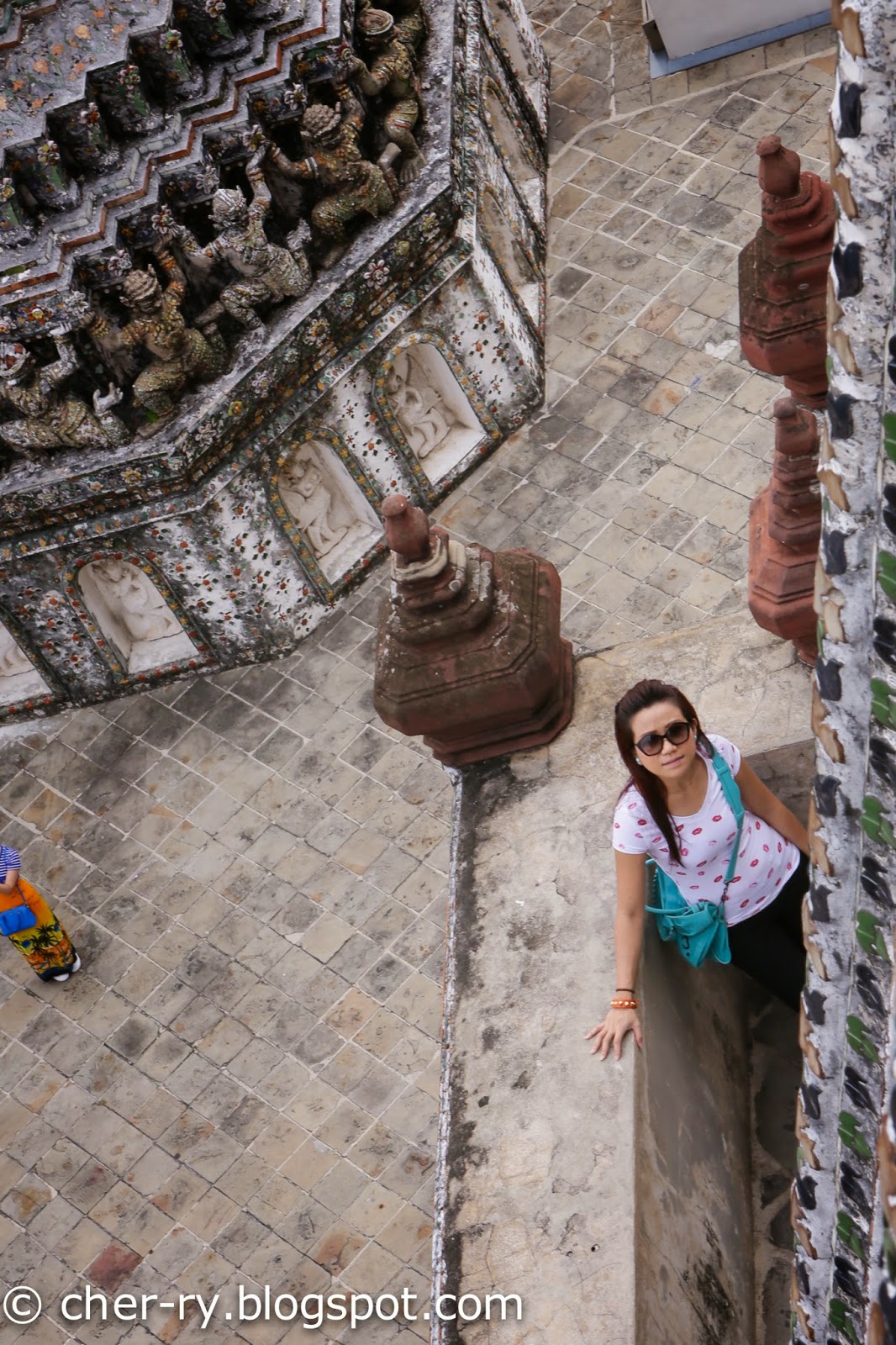 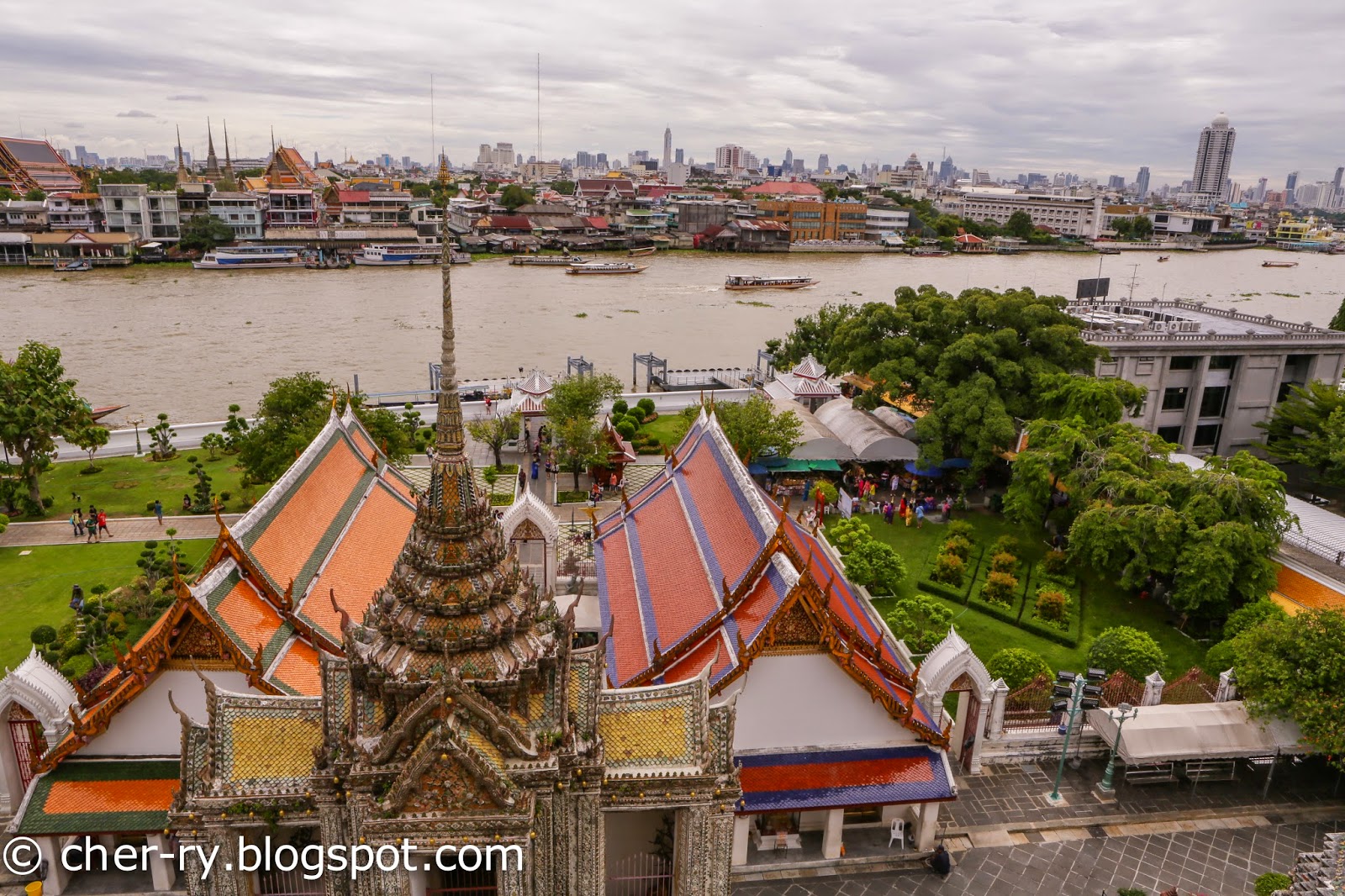 so our dear Hero Stupa climber was bz enjoying the view up there. From here you could see the beautiful Temple of Emerald Buddha and the Grand Palace. 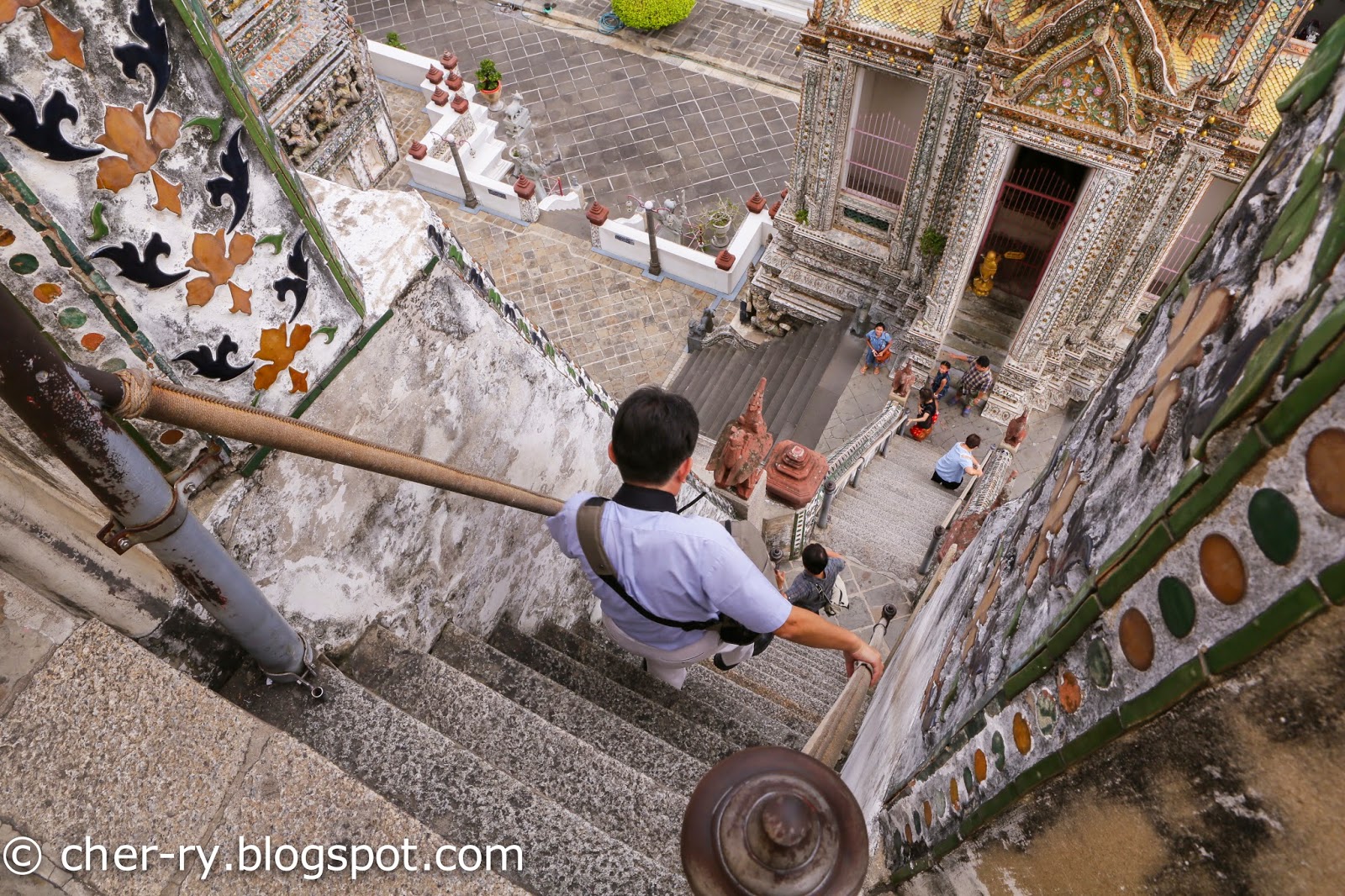 As both of us were enjoying the view separately, him at the top and me on the 1st tier, more tourists were pouring in from the ferry pier. 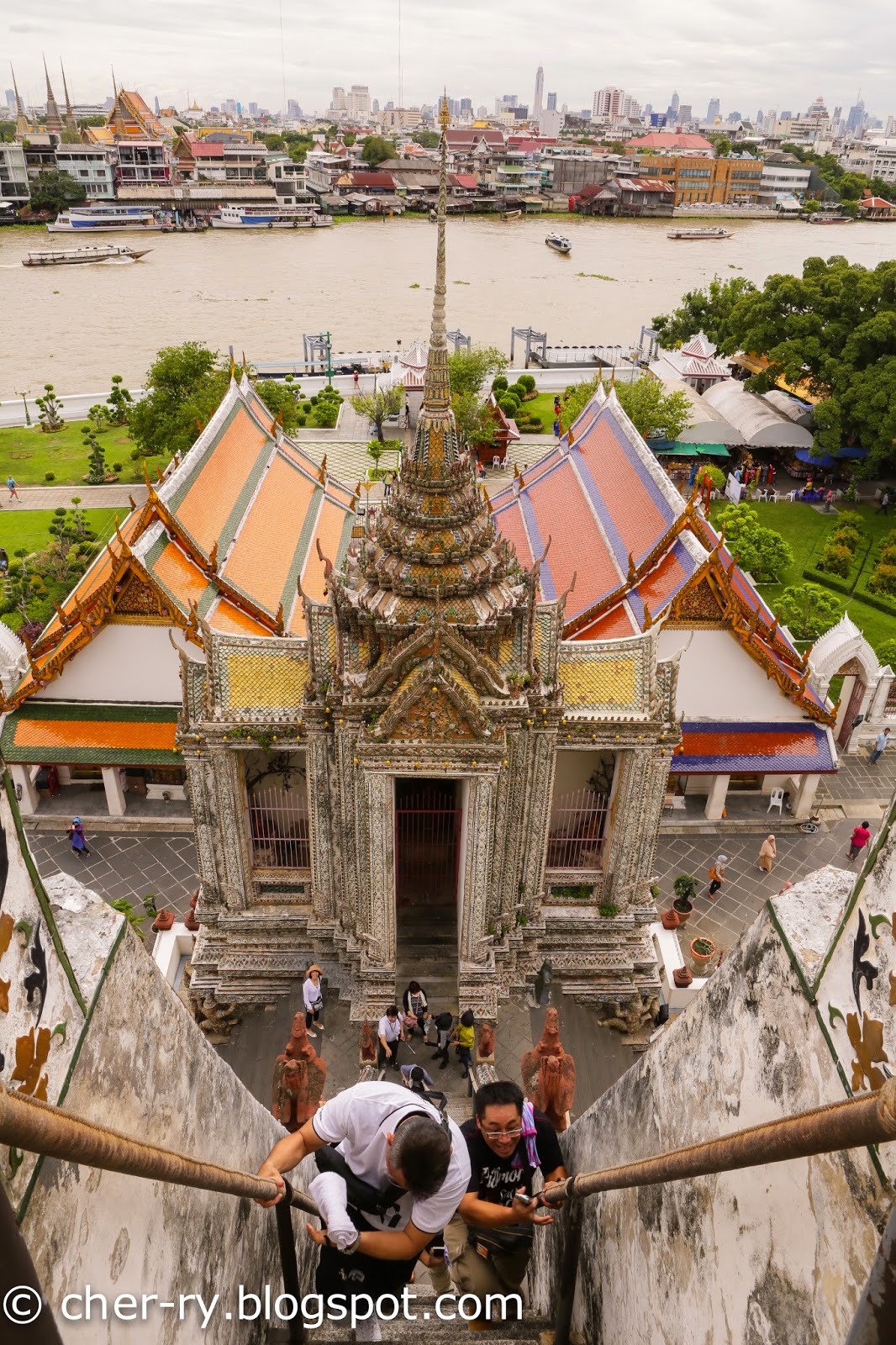 these 2 Japanese guys were huffing and puffing their way up...it was so steep it took them quite a while. Once almost at the top, the white shirt guy fell backwards to the horror of his friend *who's at the back of him*. JS's instant reaction was to pull his shirt, and pulled he did.

he sweated a few beads of cold sweat for almost hurting himself and causing a chain-reaction accident all the way down. This is just too farnie not to be shared with my dear readers. We were glad that everyone was OK at the end. 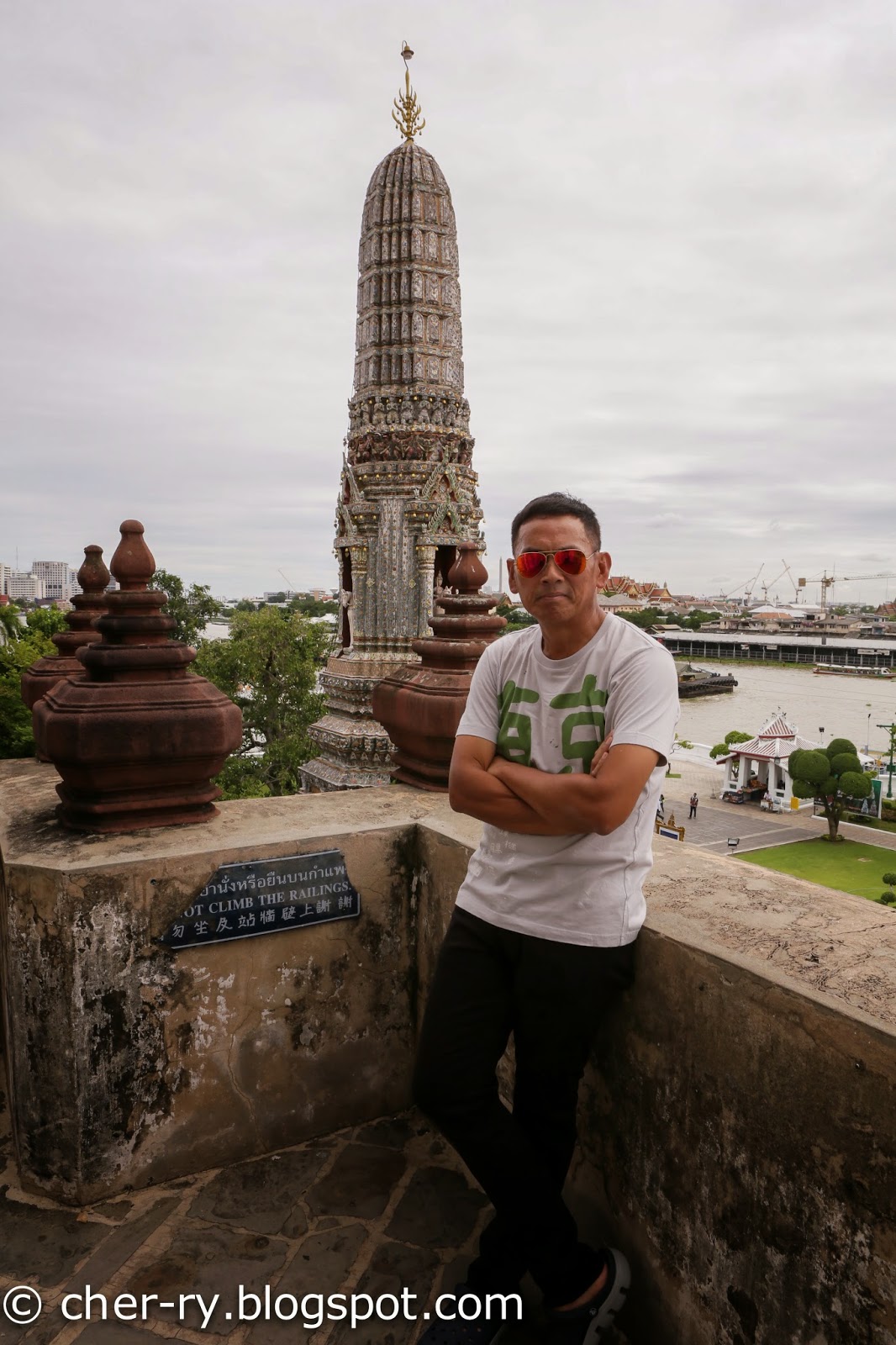 Wow u were a hero!!! u saved many many ppl today!!!
hahahahahaha 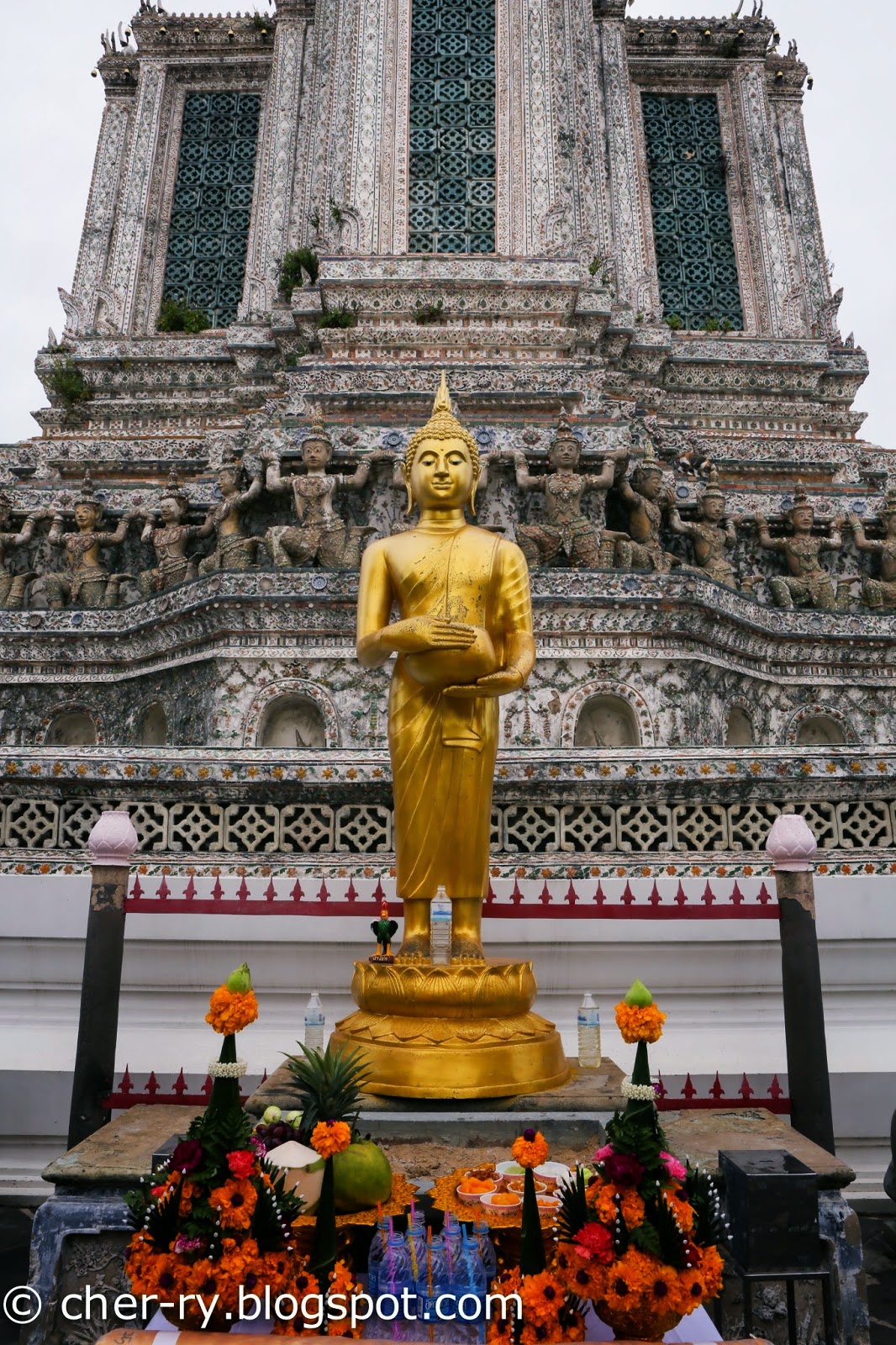 the main golden Buddha facing the Chao Praya River
You can try your luck by throwing a coin into the golden bowl held by the Buddha. 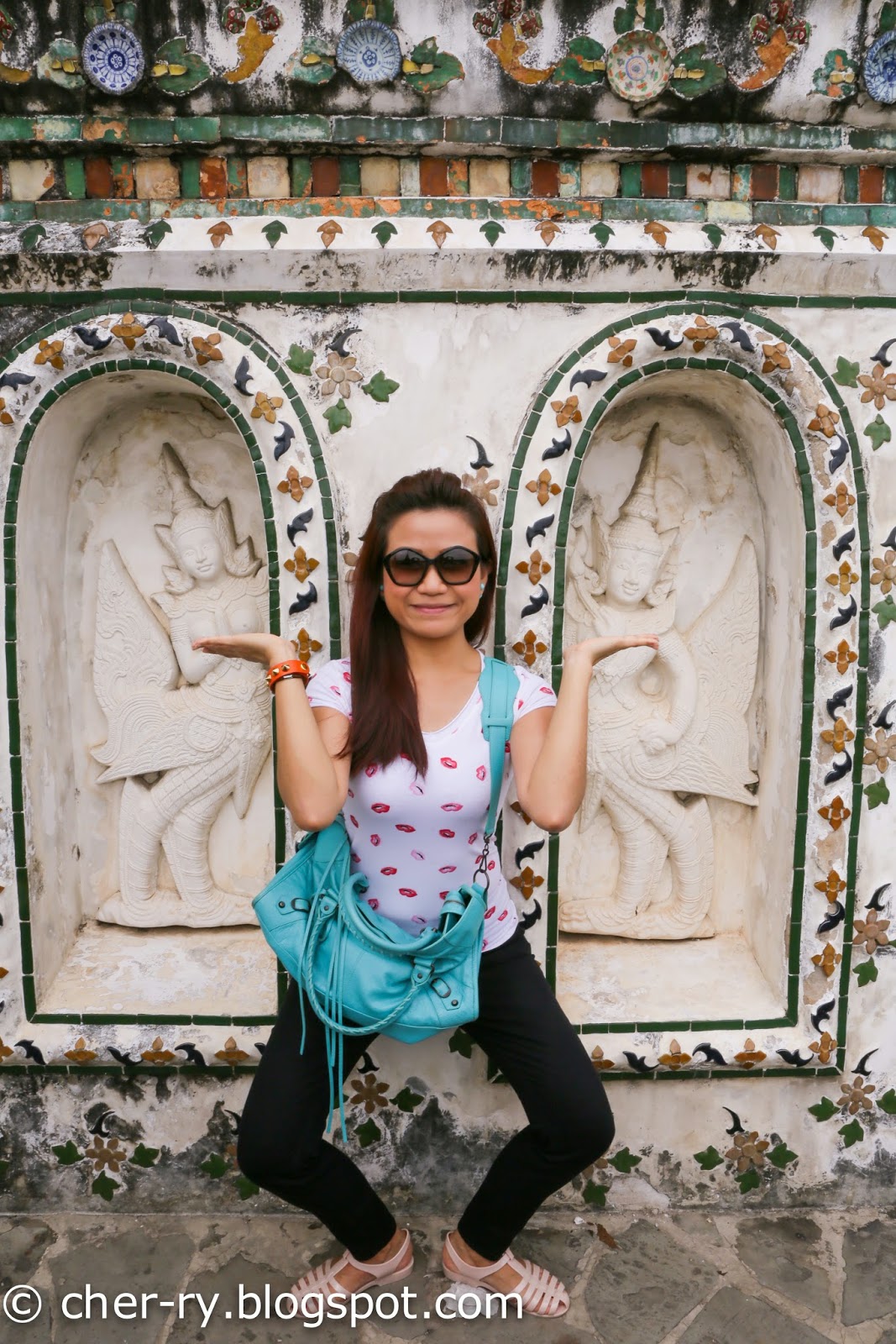 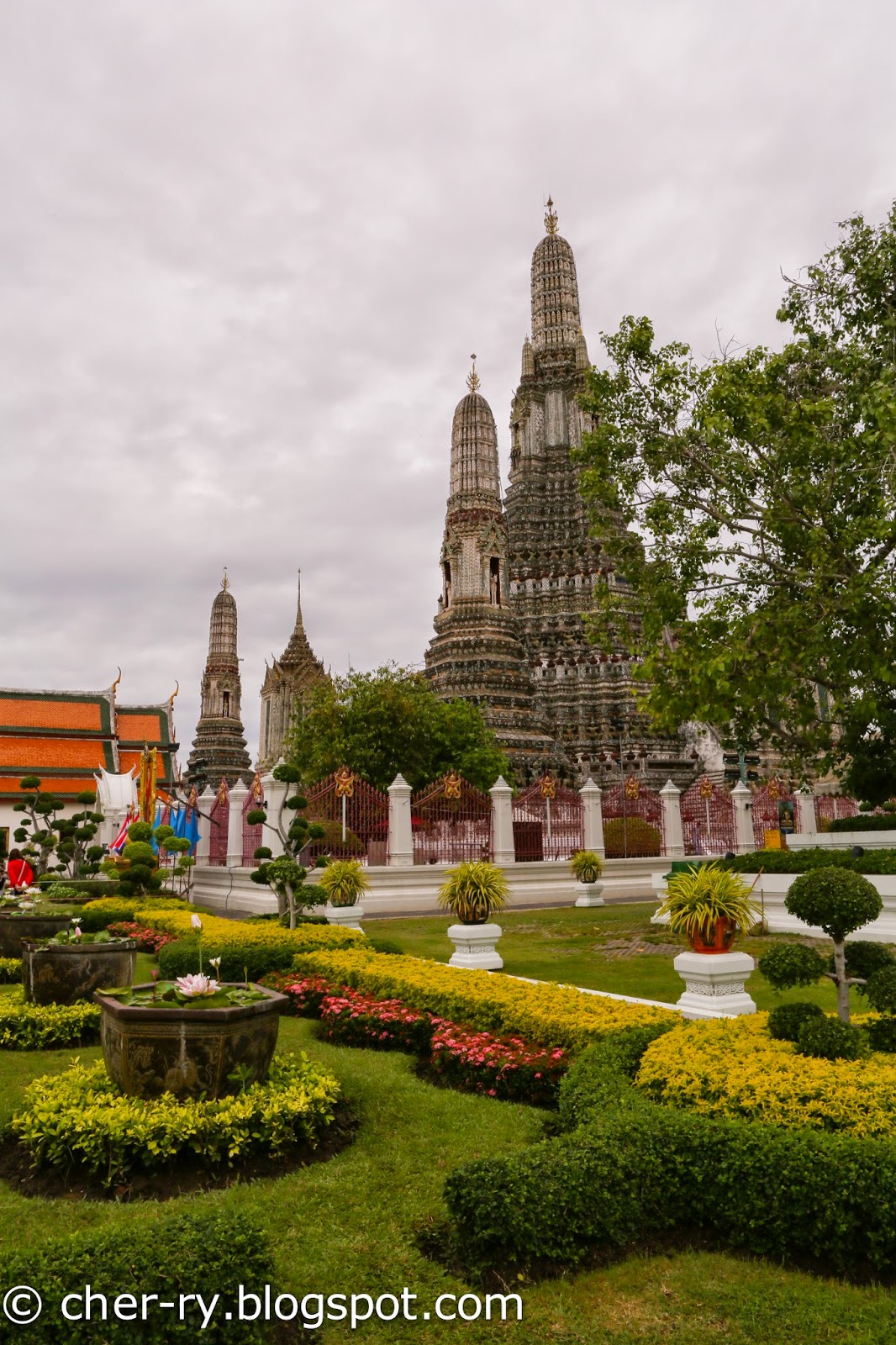 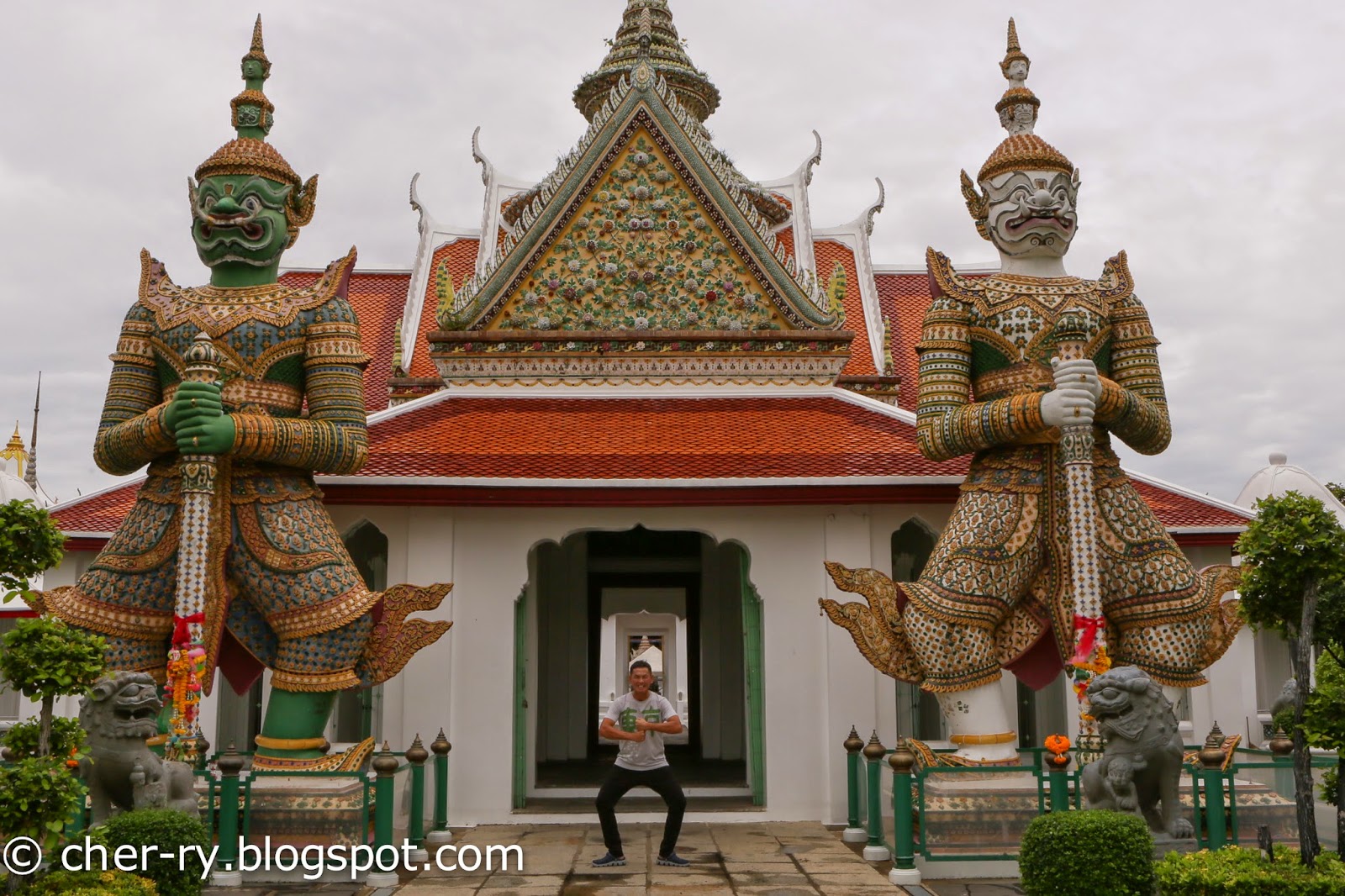 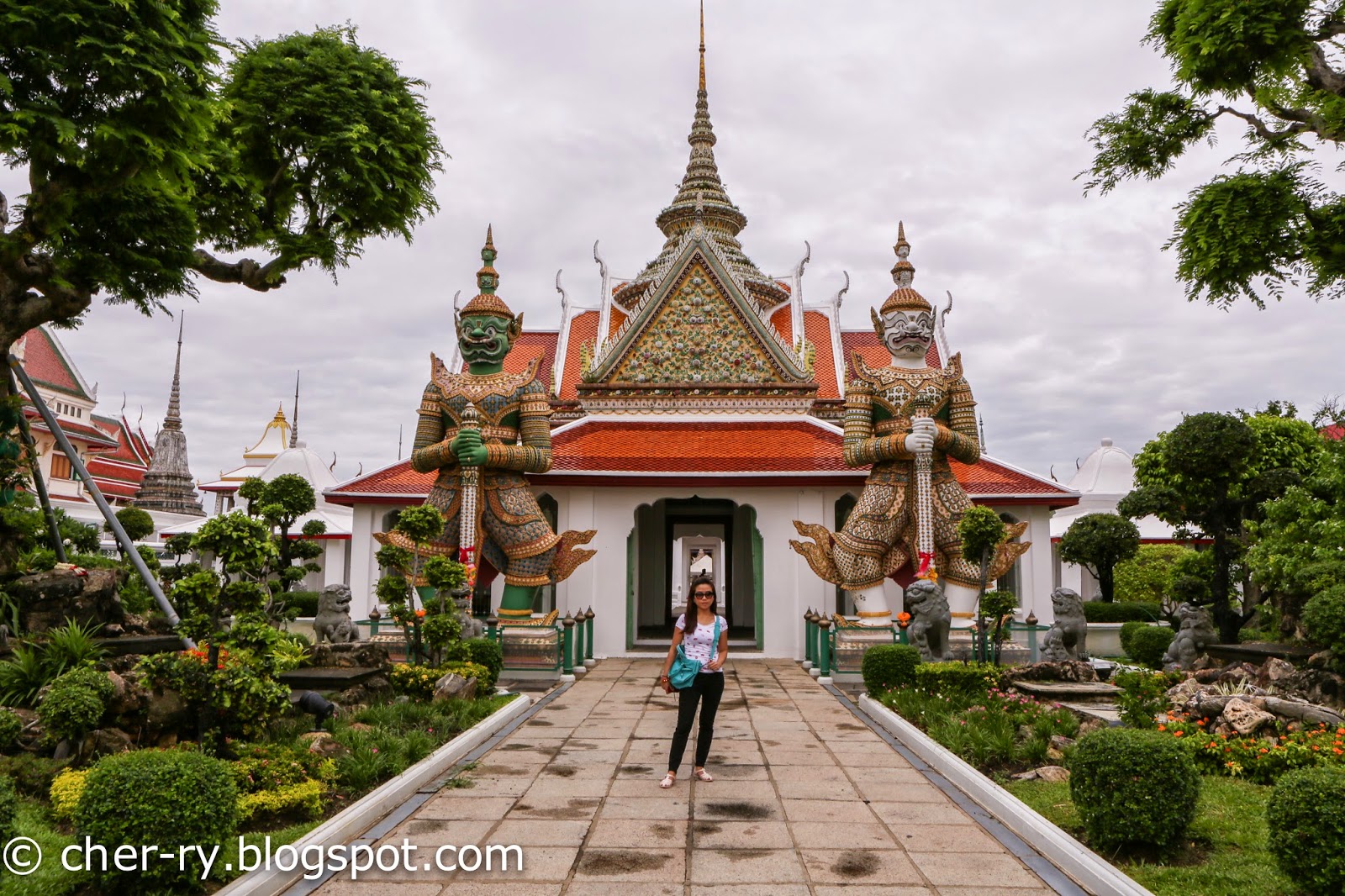 Then it's time to say goodbye
and this time we took the 30 cents boat ride back to the other side..
yes me no kidding you....30 cents. 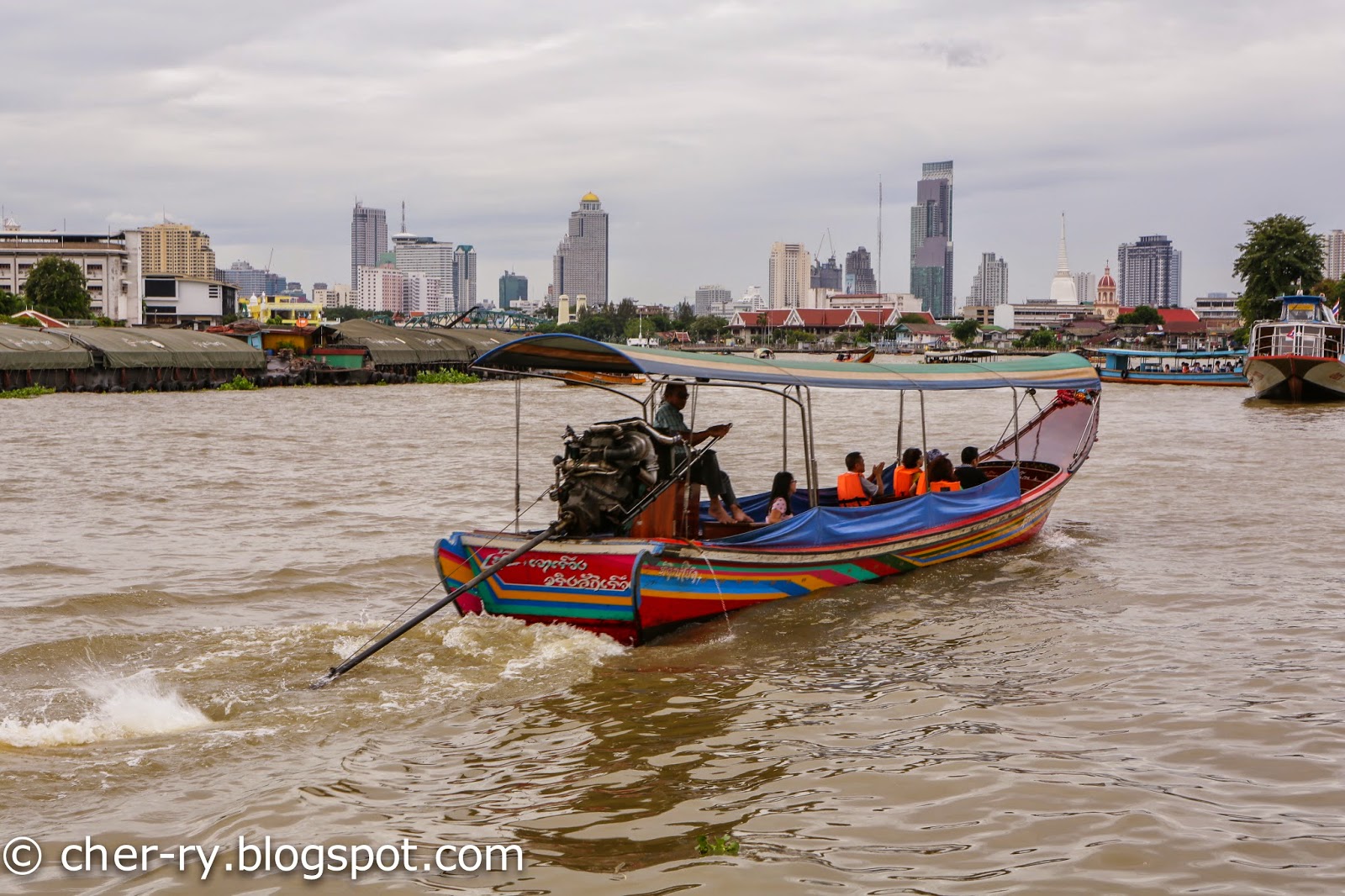 Nope, this wasn't the boat. These are long tail boat, u'll see these cruising around everywhere from the canals to the rivers, emitting such strong diesel smell. 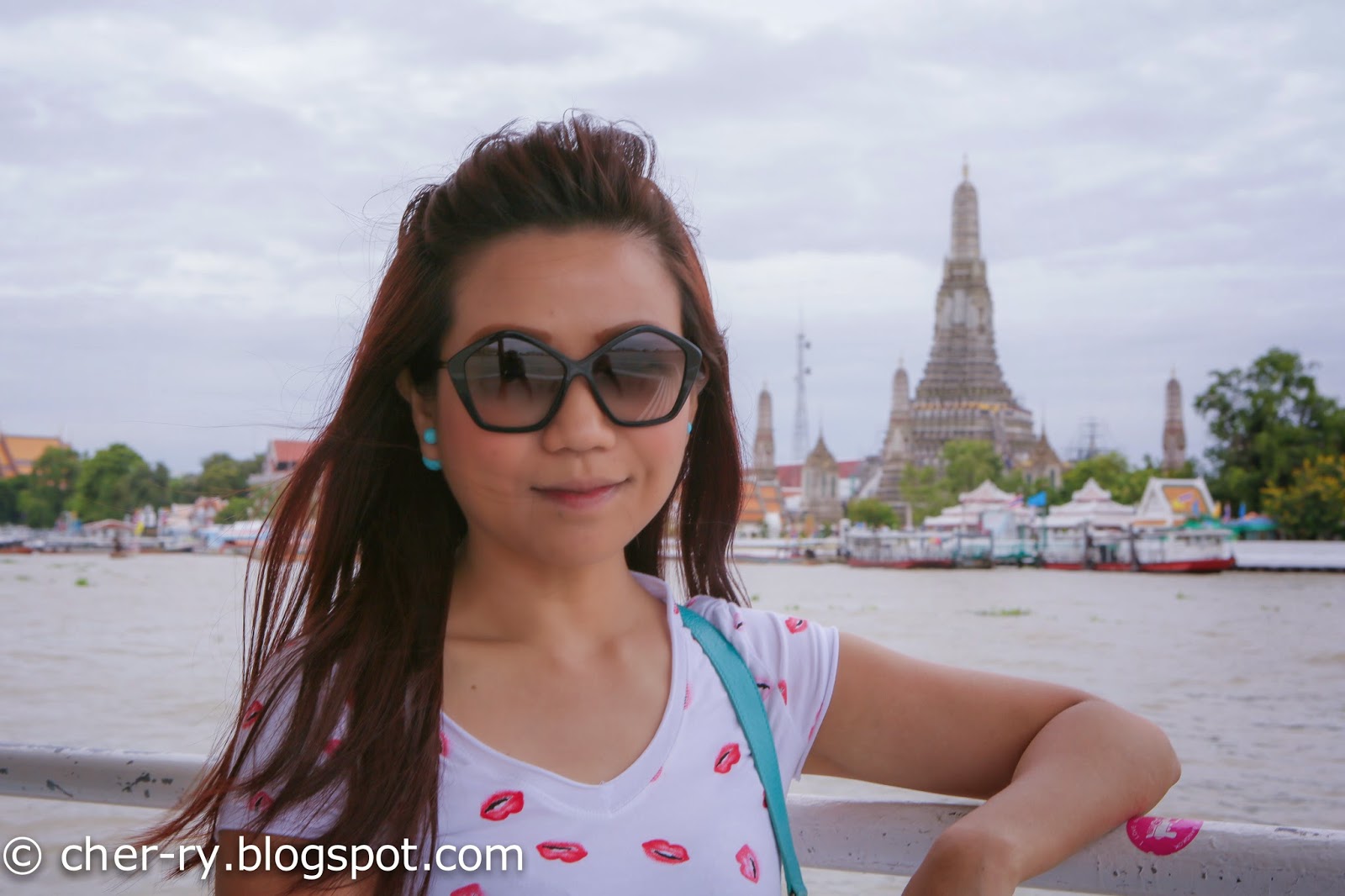 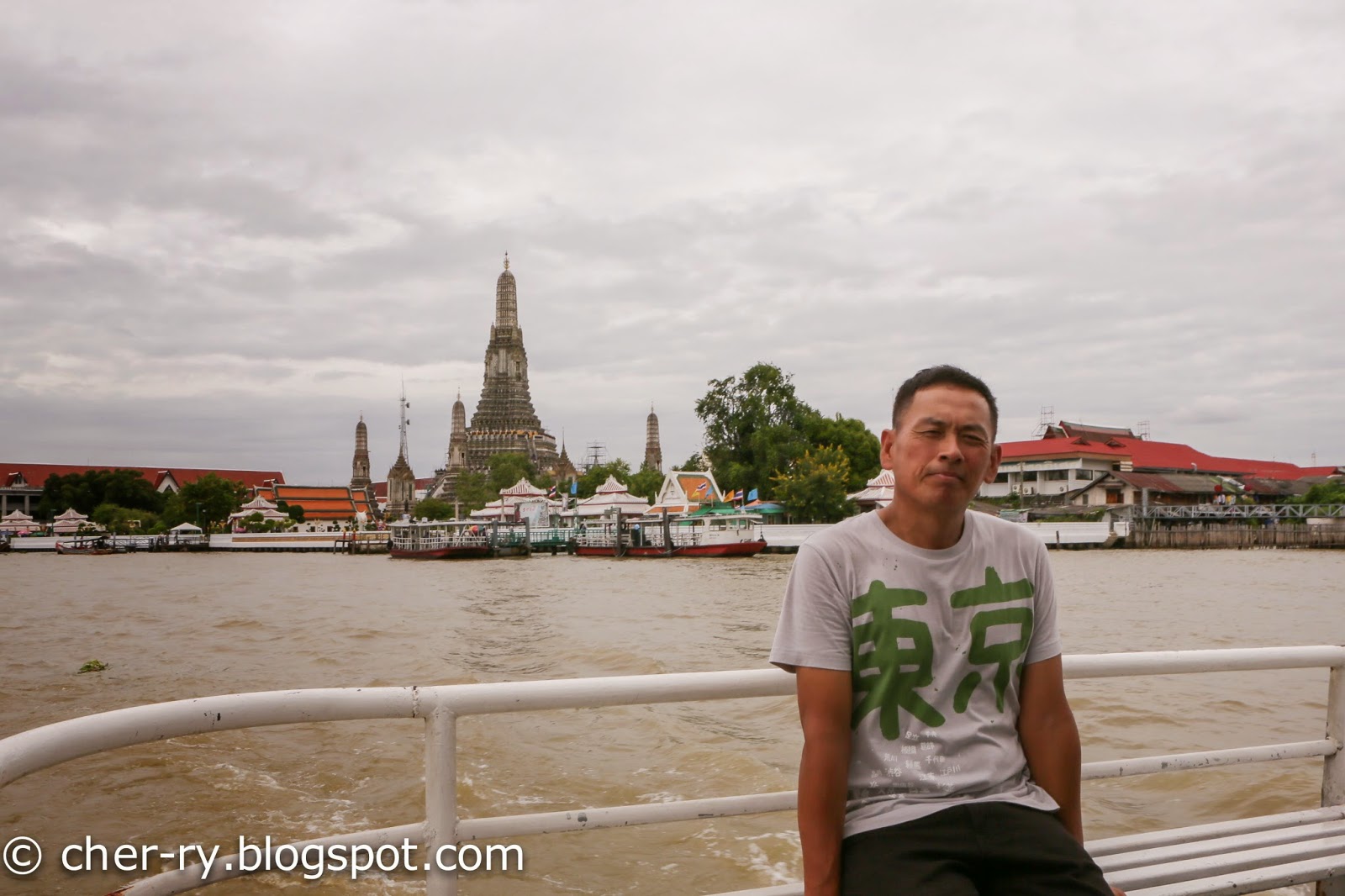 It was a much bigger boat and so goodbye for now Wat Arun. Finally I've climbed it......errr only the first tier...wahahahahaha. 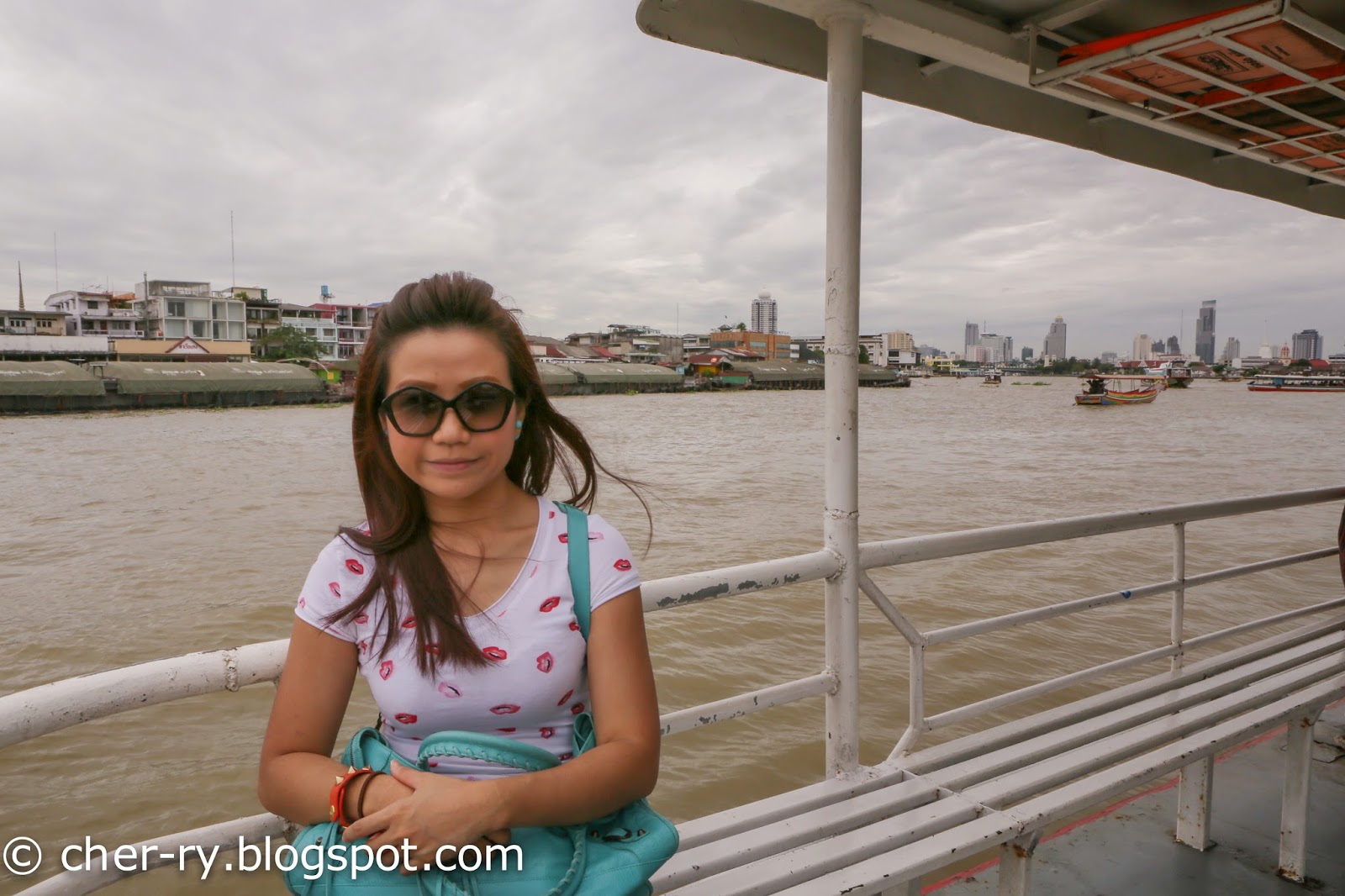 the boat ride was only 5 minutes...just to get across...and we briskly inched our way among the throngs of tourists to more temples around this area. 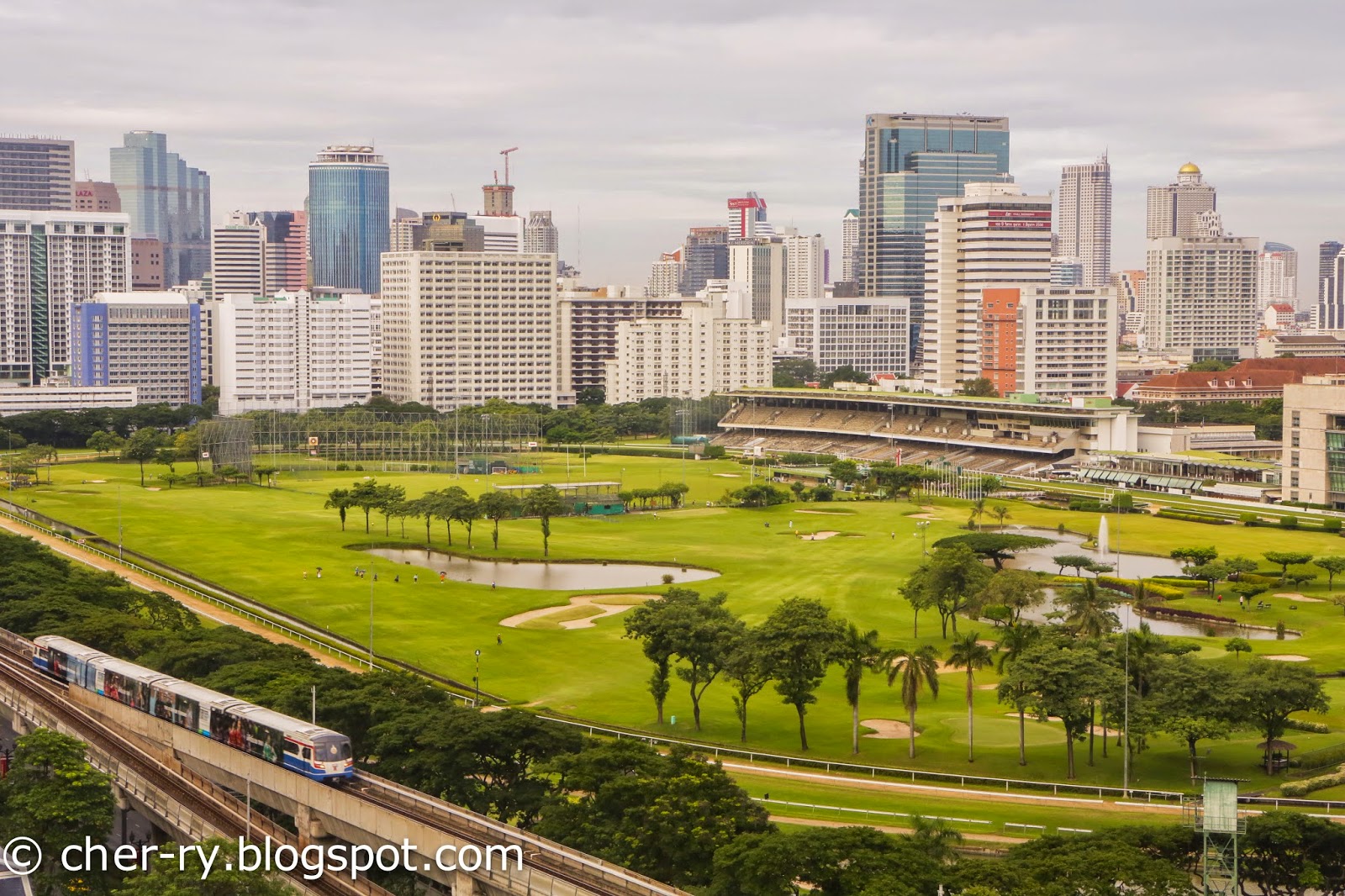 JS: "There's a golf course in the city centre right opposite our hotel!!!!!"
Monkey -_-" Ok bring ur golf bag next time then but this is like a mini 9 hole mickey mouse course.

I wanna faint by just looking at the almost 90 degree steep stairs! @_@

The picture of Wat Arun with the river embankment, you will see the full name of Bangkok written on the wall of the embankment.

JS: the name is just freaking long to remember.