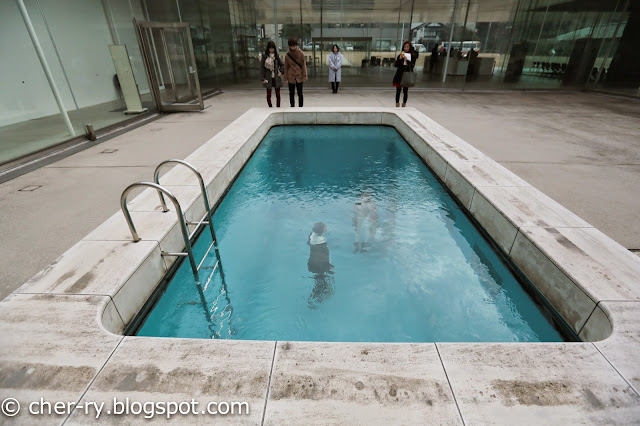 This has got to be the major attraction here in this art museum. Designed by conceptual artist Leandro Erlich, an argentinian who has made it big international.

21st Century Museum of Contemporary Art is located opposite the kenrokuen garden - which I have yet to blog, goodness!! GAH!!! Mr. JS we better move faster~~~~~~

The entire museum is of a circular shape and form...with multiple access....so one can approach it from any way they wanted. It's an art!! hahahaha I like the idea that there is no border, no boundary and no rules!!! That's how art should be isn't it? The two architects who gave a new breathe to the city of Kanazawa by designing this art museum were Kazuyo Sejima and Ryue Nishizawa. Both of them were recipients of Pritzker awards in 2010 for numerous designs and works created round the world. Now that I've found them, I'm gonna be chasing after their works round the world, from New York to France to Netherlands and around Japan :))) *new project for us JS!!!!* 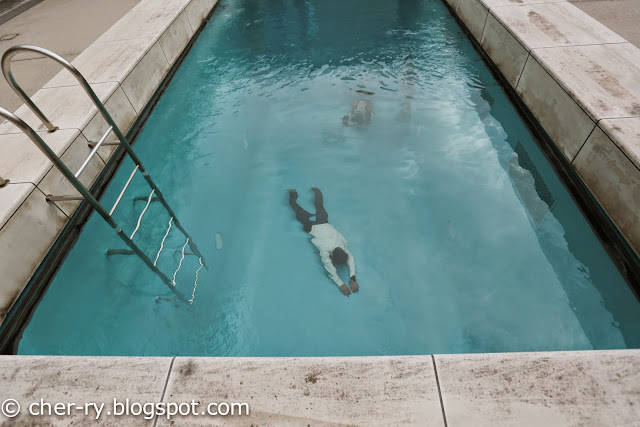 Nope, that's not us...hahahaha....this visitor were happily posing for us to snap pics. That would be nice coz if there's no one down there, then a pic of this swimming pool would be meaningless.

and nope, it's not that he went swimming in his sweaters or that he can dive deep, it's just that there is another compartment/room on the basement. 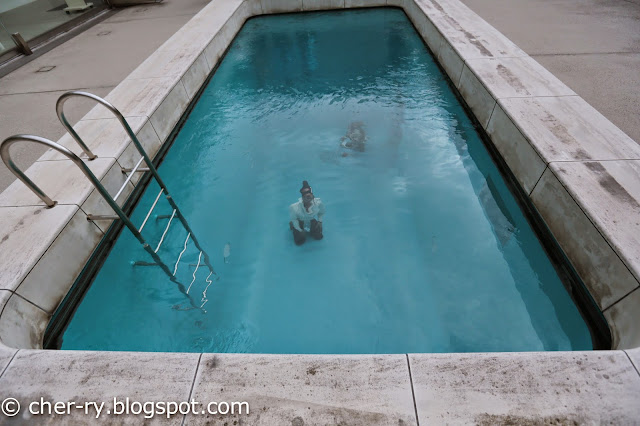 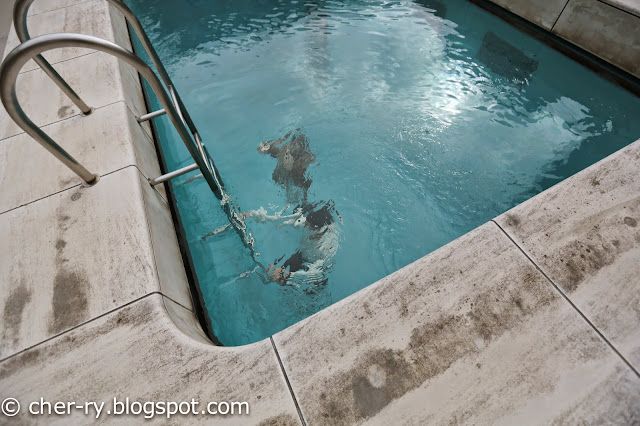 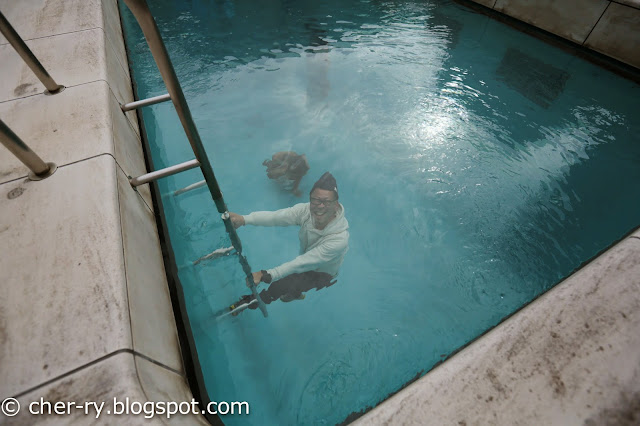 Hello there~~~ now I could see ur face...
Where do you come from???? anyway most of the tourists who visit Kanazawa are Japanese. We hardly find anyone who speaks english or has got natural blond hair. I'm saying that coz these days u can get any hair color that u want. 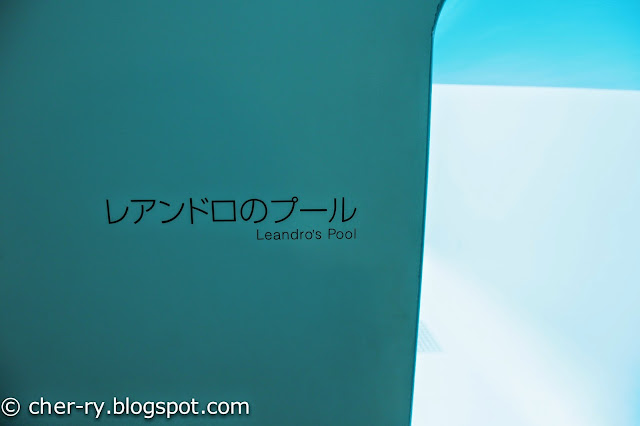 Then we got down to the basement to visit the pool.
Come on readers, let's take a dive, or a quick swim in the winter months!!! 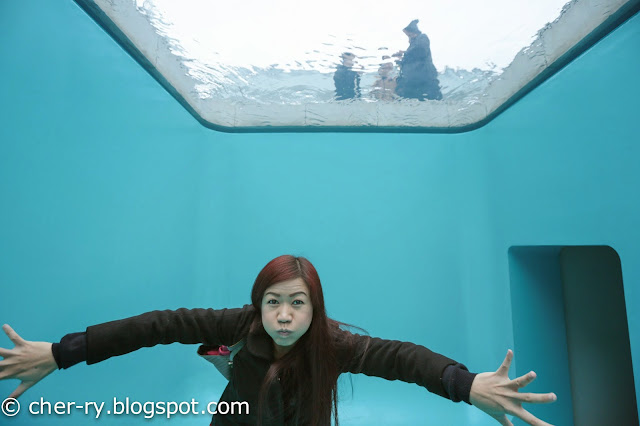 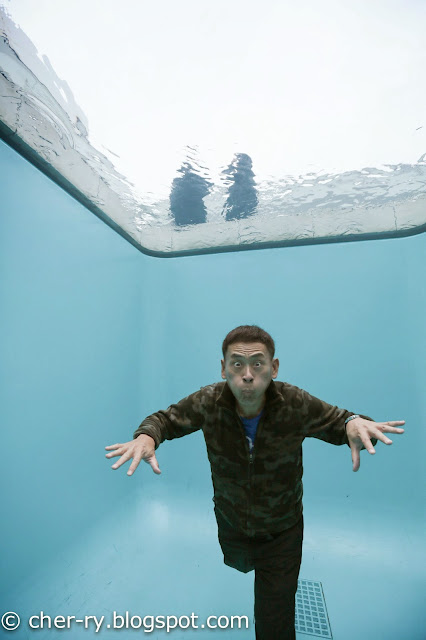 No one can do it better than Mr. JS!!!!
he's such a cartoon sometimes....but in reality he doesn't swim like this...kekekekeke 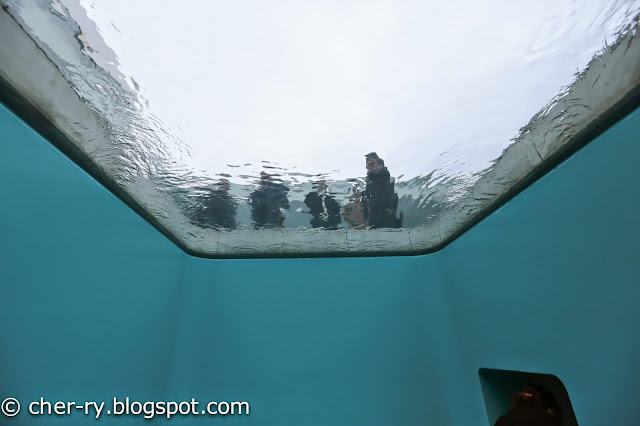 and we returned good deeds by doing all sorts of silly pose for visitors upstairs to have a kawaii pics...so I guessed we must have appeared on other ppl's Facebook or Instagram

>.<
hahahahahahahahaha
nope, I don't wanna see how I looked like and obviously I didn't not sprawl on the floor coz Monkey was wearing a dress :P 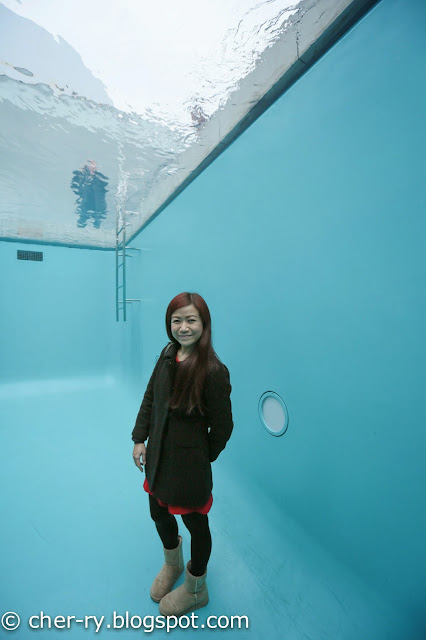 Nobody swims in their boots...oh well maybe except in emergency?? 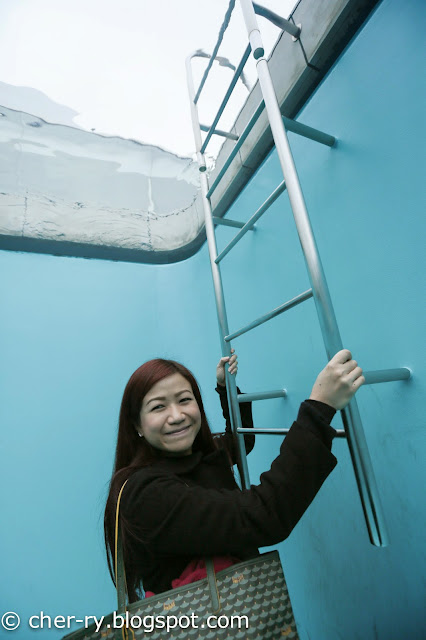 the sheet of water was only 10cm thick, suspended with glass. So in fact from the top, u could touch the water. I guessed the artist wanted to evoke the feeling of perception and cognition...but with humour. What u see may not be what you experience I guess? But it definitely did create a lot of interaction  among the viewers both above the pool, and those inside the pool. Now we gonna be chasing after his works next in New York :)))) 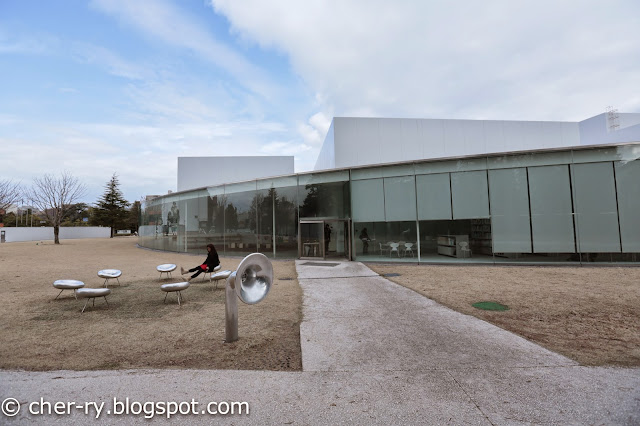 the exterior of the museum is quite minimalist, with more works from other artist....Monkey got tired from running around and laid her bums on the mercury stools...notice there's a mercury speaker too? Designed by Florian Claar. 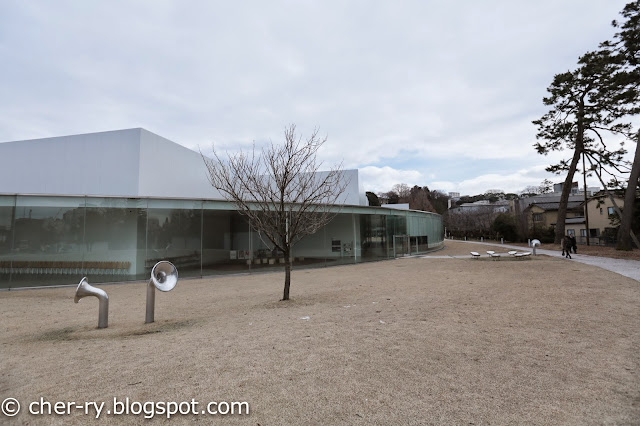 We then noticed there's many speakers being planted around the ground of the museum. U just gotta try and test which one is connected to which....and we did. 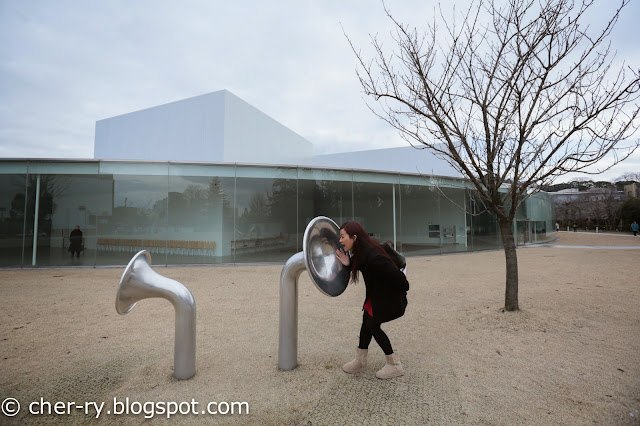 It works!!! this one was connected to another one 10 metres away...and u could really relay messages by talking to it...nope, u dun have to yell...it's just me being drama, as usual. 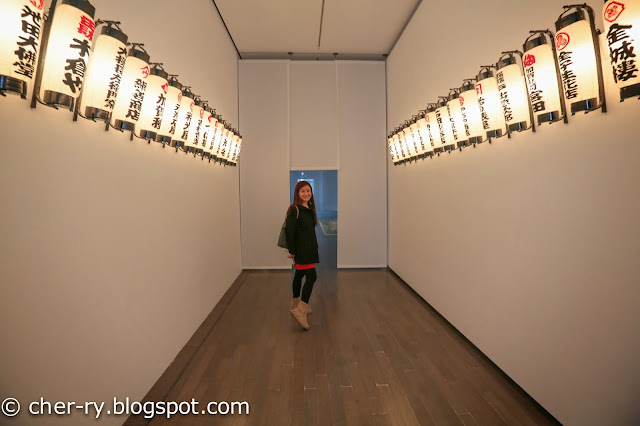 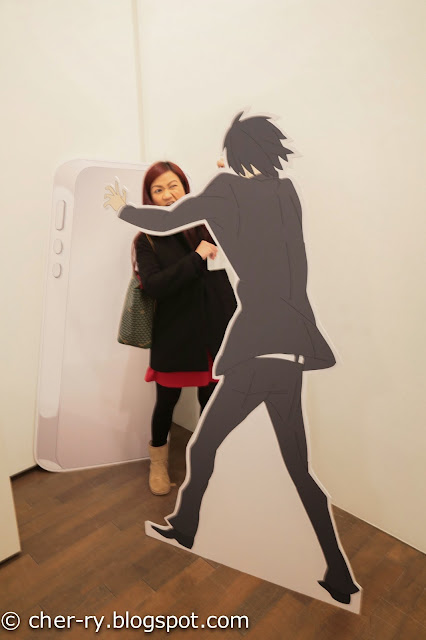 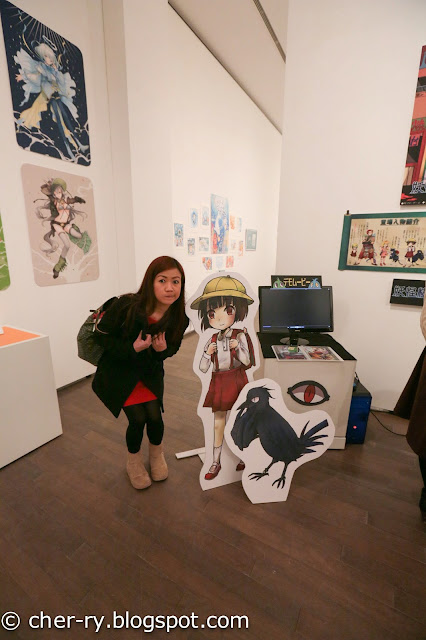 there were a few exhibition inside the museum, from architecture to anime :P

We really enjoyed the functional architecture especially to resolve problems caused by earthquakes. Temporary housing solutions for victims including a cathedral made from cardboard!!! So architect Shigeru Ban not only built housing solutions and hospitals for victims, he actually did build a cathedral made from cardboard in New Zealand and last week a few friends visited it in Christchurch.

There are a lot of works here in the museum but no photography allowed, including the Lights by James Turrell, which we visited in Naoshima last year. 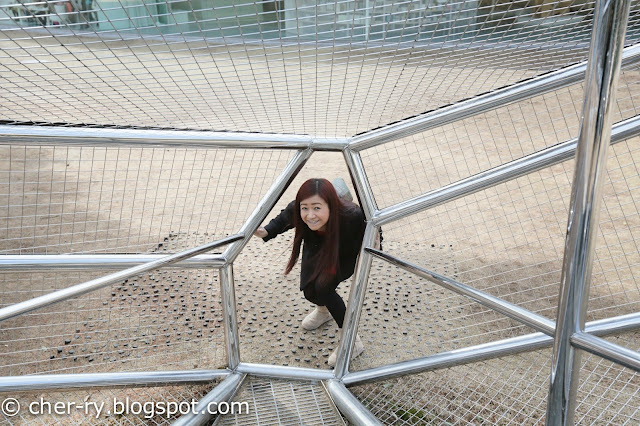 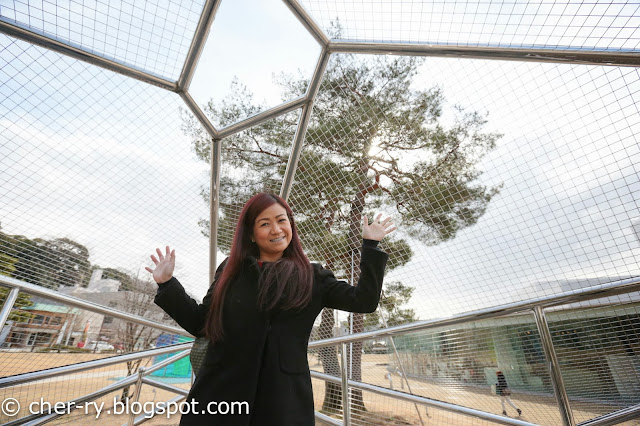 Monkey got caged!!!
It's called "Wrapping" by Fernando Romero 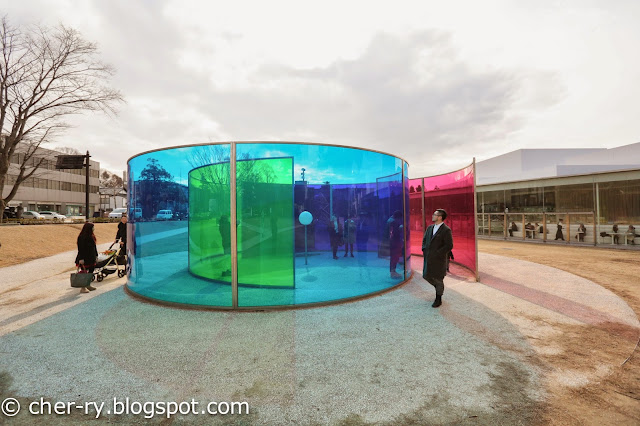 But I was more intrigued by this simple work....It's called the Colour Activity House by Danish designer Olafur Eliasson....

it only consisted of 3 colored panels....of the 3 primary base colors - yellow, cyan and magenta. It's meant to be in this curved panel for a CMYK experience :))) the only cyan magenta that I know are my printers cartridges!!! *Smacks forehead* 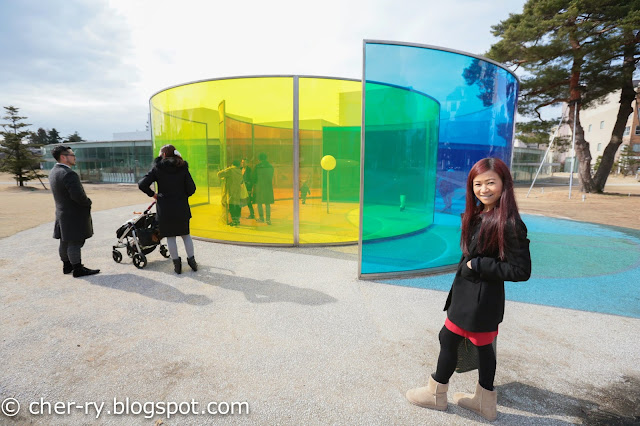 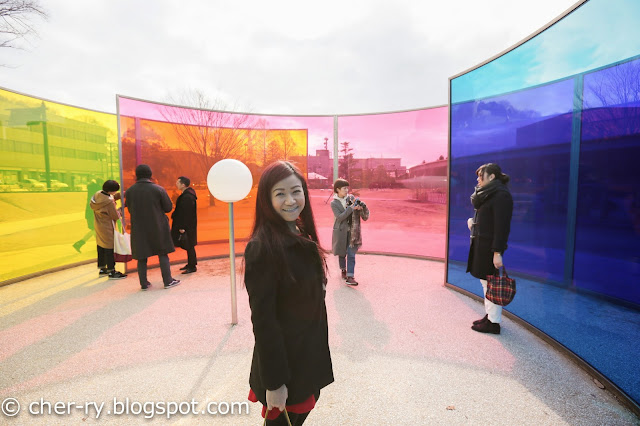 simple and yet clever. As we walked around, the colors change and made us glee in delights. This was what the artist wanted to produce --> Visual perceptions.
:)))))))))

this art museum is highly recommended and so near to all the nearby attractions. The other item that I like about this museum was its elevator!!!!

For more info on the museum:
https://www.kanazawa21.jp/en/