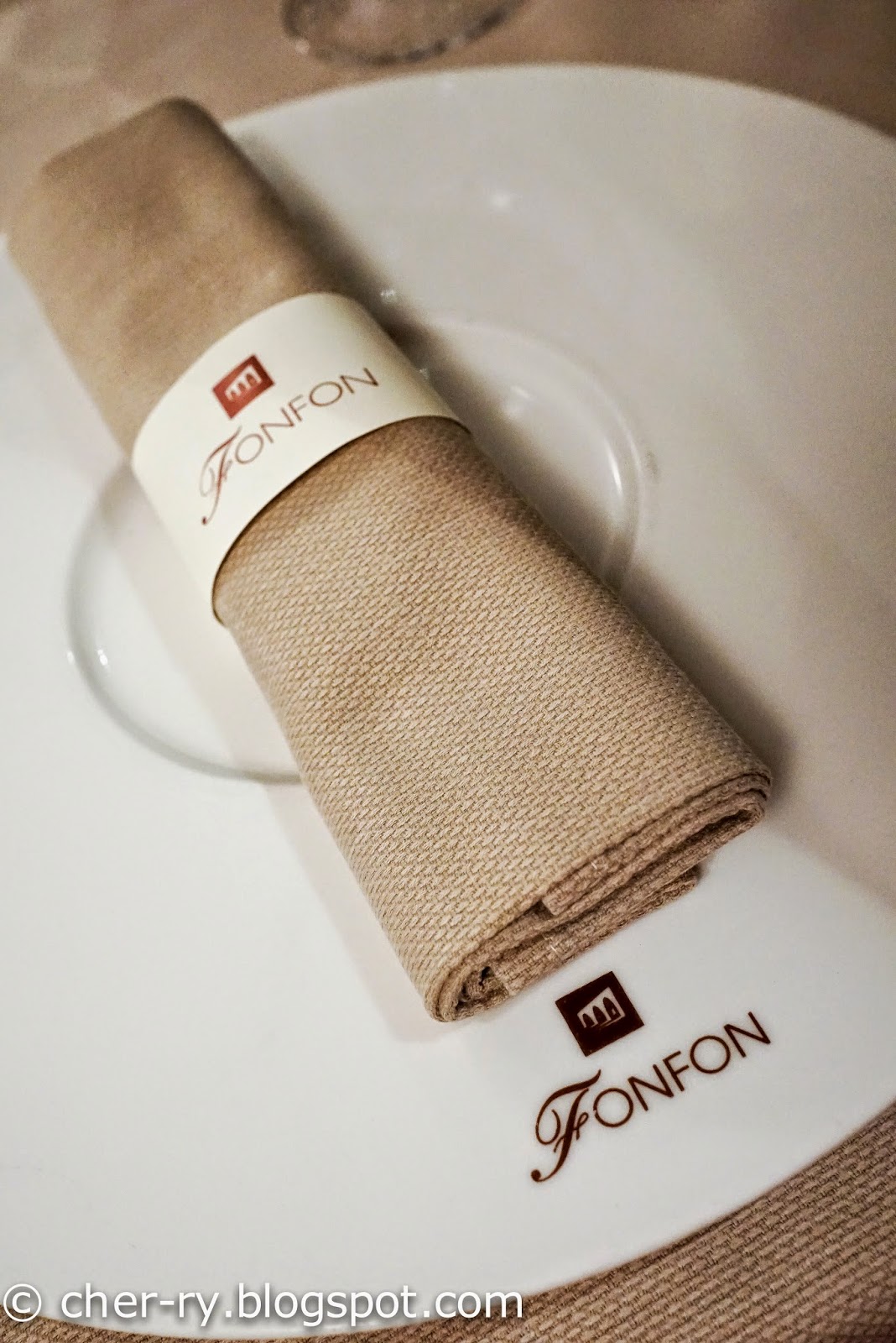 The one and only Fonfon by the valley of the sea. This was recommended by our lady-captain who took us out to the sea earlier. Monkey chartered a private boat for a day out with beautiful sights, important and historical sights which threw us both outta our socks. I mean, we did not expect nor planned it, like the EXACT diving spot of the famed Jacques Cousteau when he tested the SCUBA regulator. Or watch people scaling the vertical rocks by the sea. I wanna live in Southern France :)))) so many enthralling activities.

So back to Fonfon, not only lady-captain highly recommended it, the hotel concurred it's a lil place that locals love to go too. Since it was a few kilometres walk away from our villa....we decided to burn some calories and walk to the family run restaurant. 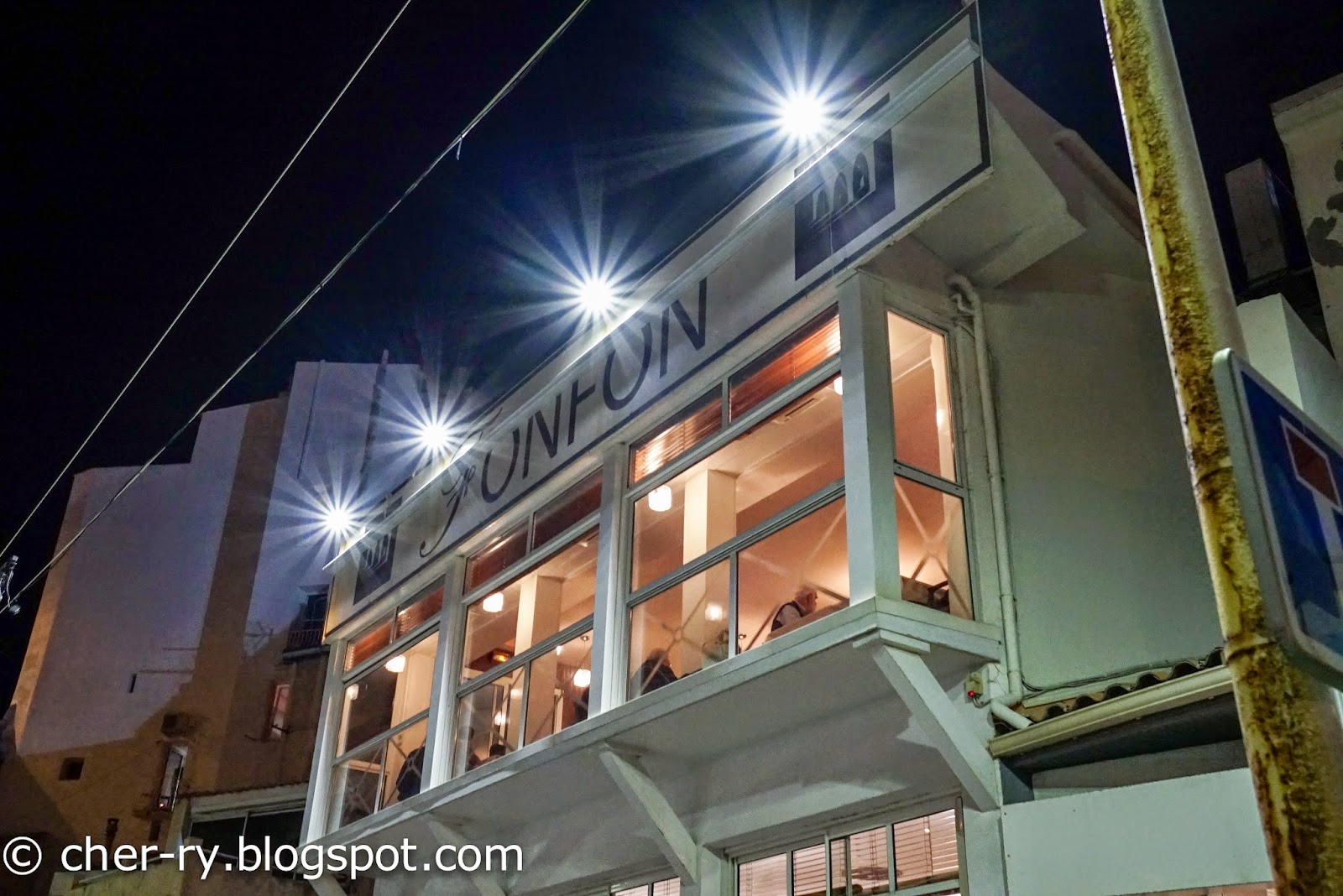 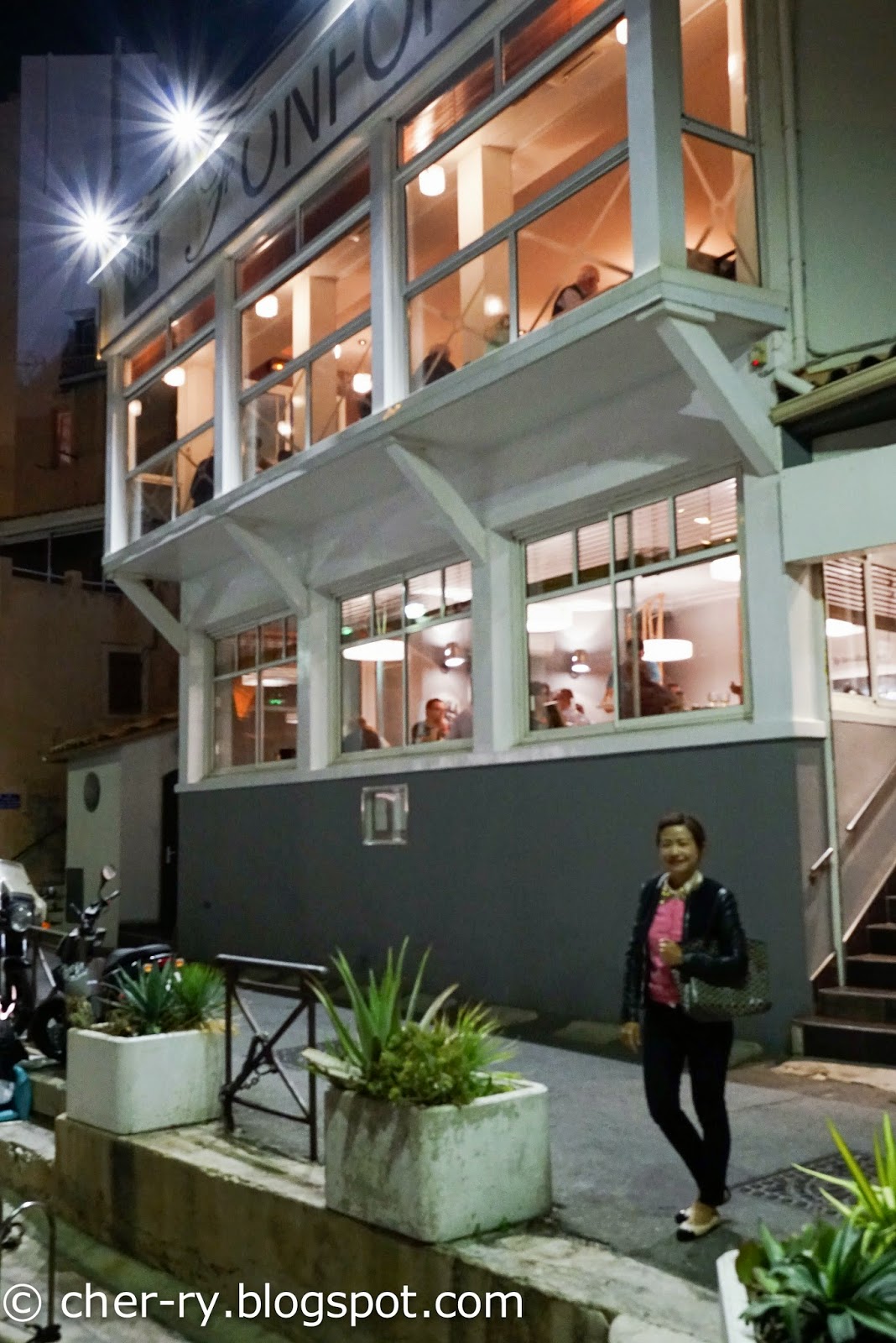 It was a beautiful walk as far as I could remember, with a staircase leading down to this valley and Chez Fonfon was brightly lit and modern :)))

Reservation in advance is a must at Chez Fonfon. There's not many tables, small and intimate setup plus tourists and locals alike are fighting for a table here. The one and only one dish that Chez Fonfon shined like a million dollar diamonds is Bouillabaisse. You cannot leave Marseille without having Bouillabaisse.

so many variations of stories on the origin of this dish. Some claimed it was dated by in 600 BC but one thing for sure, it was created by fishermen who cooked the not-so-desirable catch from their boat. Fishes that were ugly looking *esp those deep sea ones* and those were too many bones to be served on the table, were used to make this stew. Fennels, garlic, tomatoes and other spices were thrown in. Carbo such as potatoes and carrots were added in to give this dish some heartiness.

Today it's an up-market dish, requiring hours of preparation and it ain't cheap. It's about Euro 50-75 per person depending on your selection of fishes. 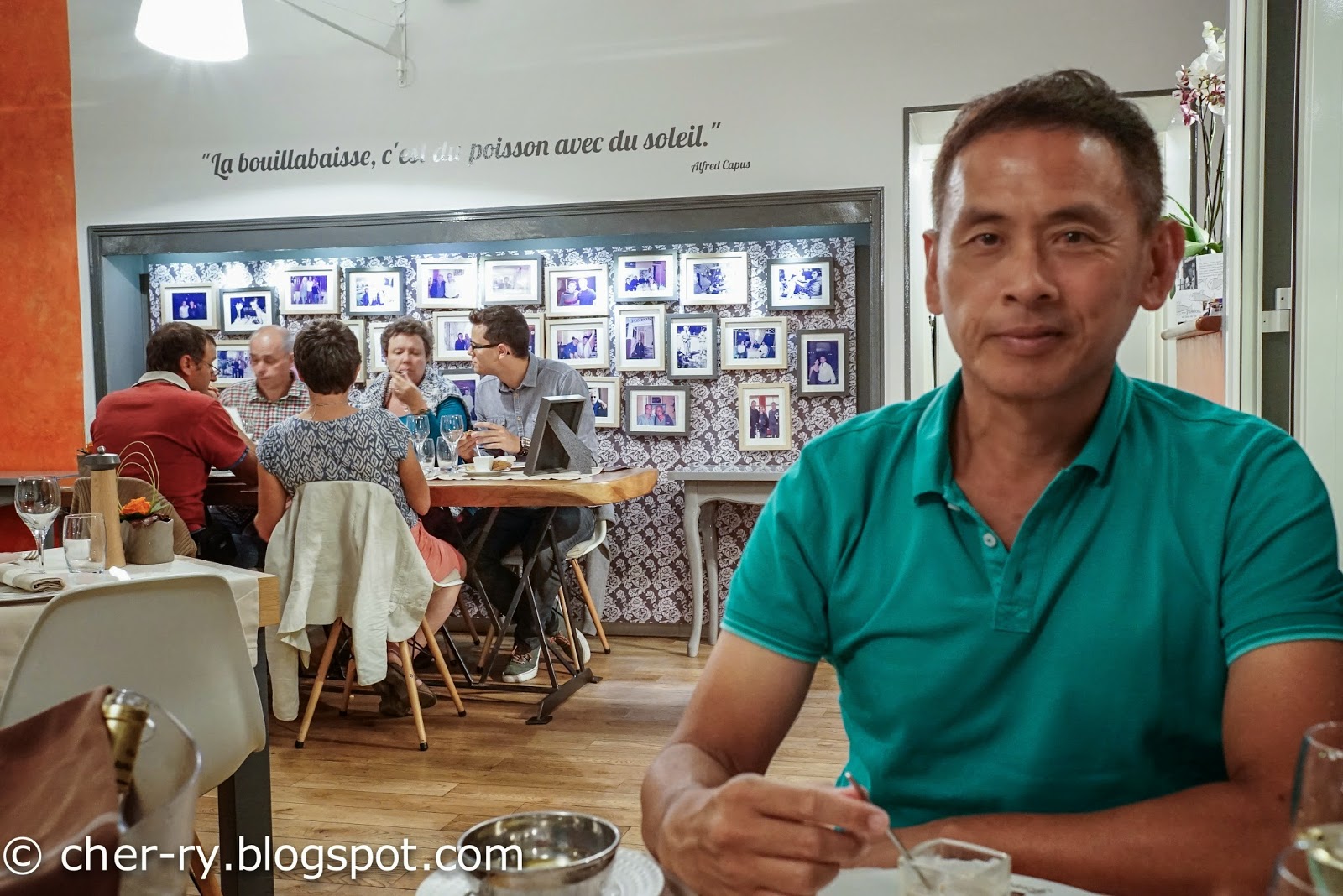 Green is good, according to Fengshui master, green promotes growth and health. The only thing I see him growing is sideways :P hehehehe that's not true. Mr. JS is one health freak and a walking calories counter. He knows precisely calories consumed, how many steps he took that day, and how much he has burnt. Despite the discipline, he'll never forgo his passion for food and wine....and golf too. So it all adds up, if u need to achieve something, u better find some activities that u enjoy doin. 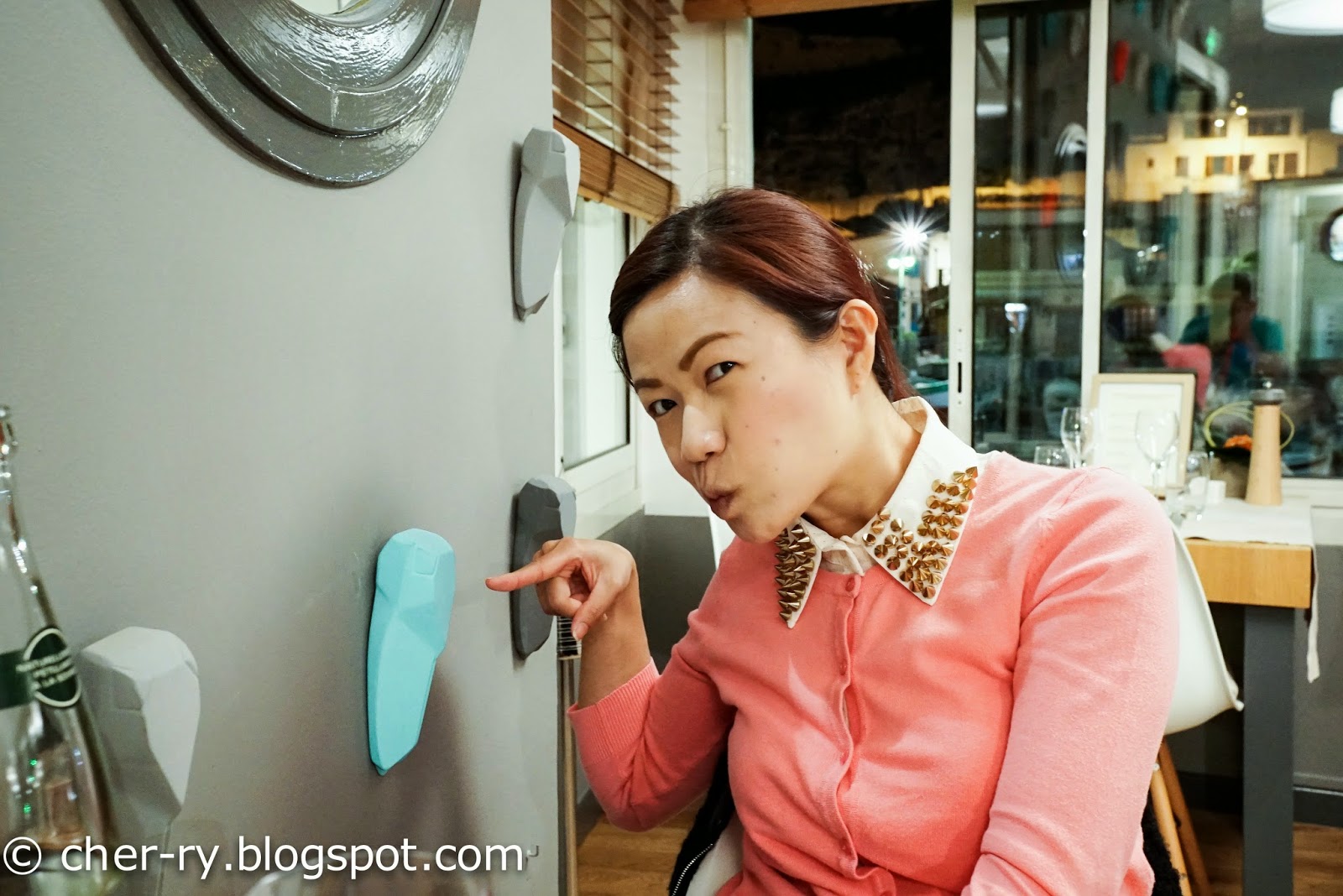 Monkey and her favourite color, pink *for now*

she jokingly said, JS is like the cicadas aka Cigale in french. It's a tiny lil insect but sings or should I say, makes hell lot of loud noises. There are many cicada in Provence. Though small in size like a bee, the sounds emitted from them are thunderous!!! in return he said I'm noisy like a cicadas. 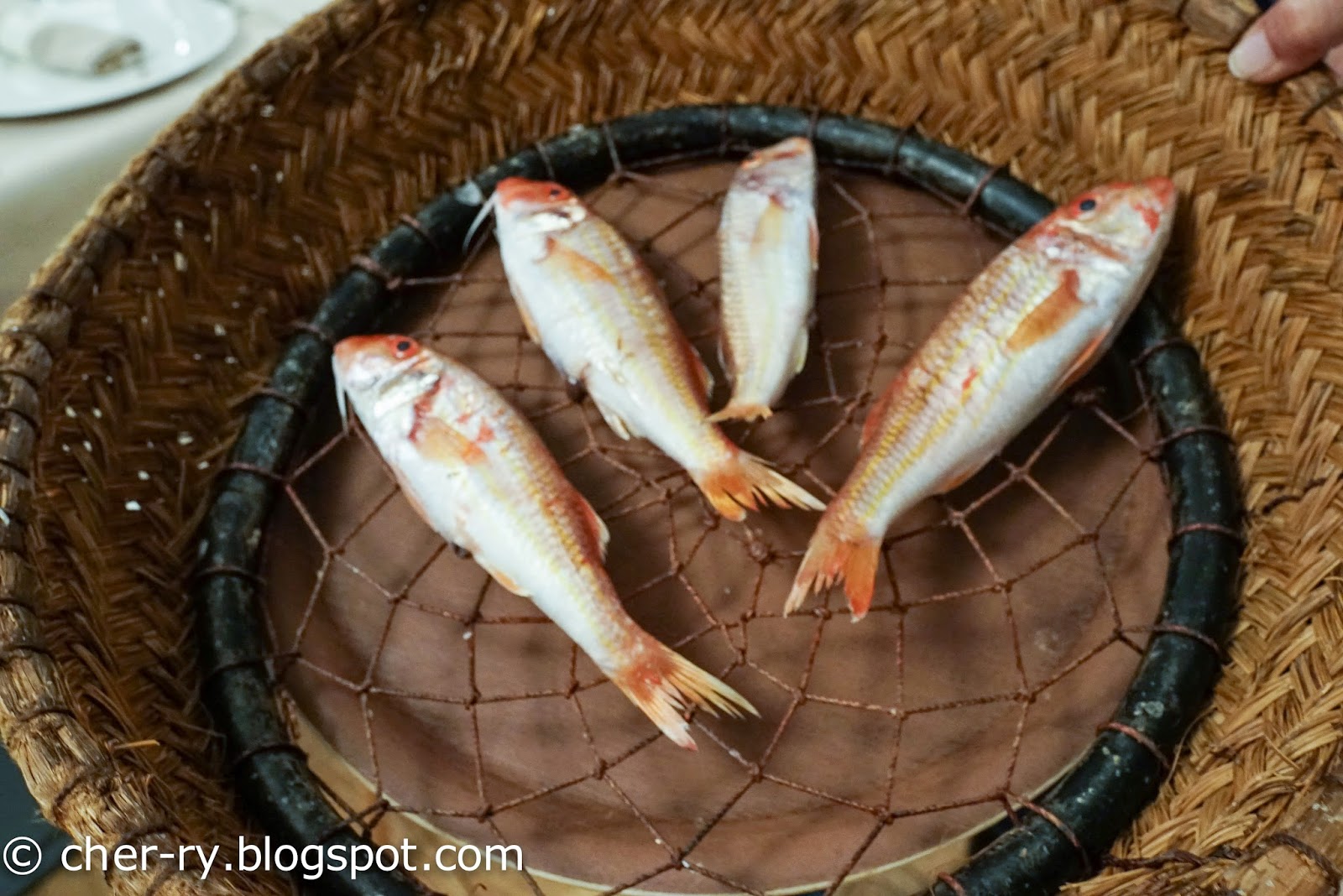 catch of the day - beautiful red mullets!!! We didn't want the huge ones and opted for small ones. The smaller the more power pack sweetness they have!!!

Lady boss was surprised why asians love tiny fishes....hahaha just like how Americans prefer chicken breast, while asians prefer wings and chinese would fight for the feet!!! hahaaha. They say eating chicken feet is gross but I lurve the texture :)) 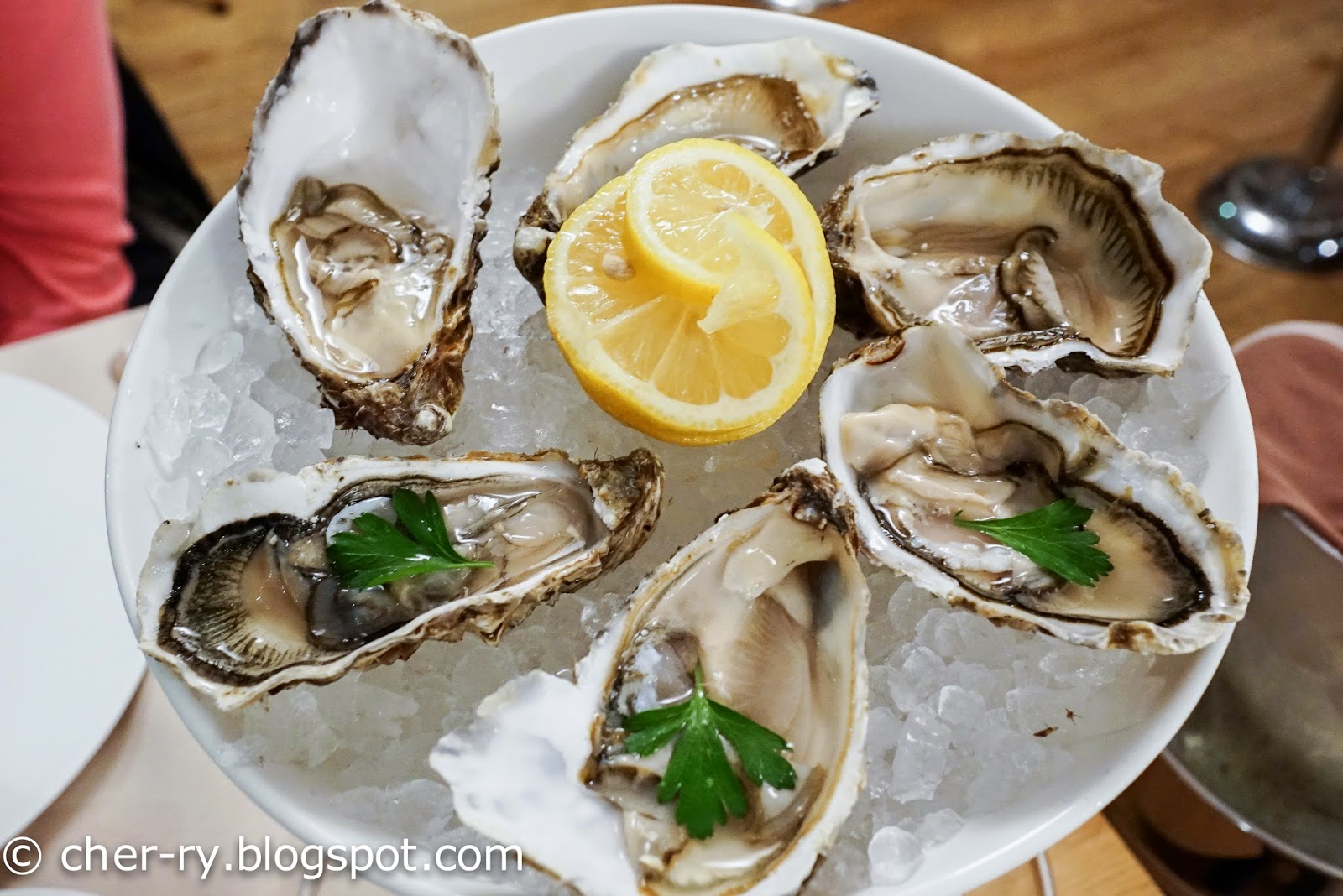 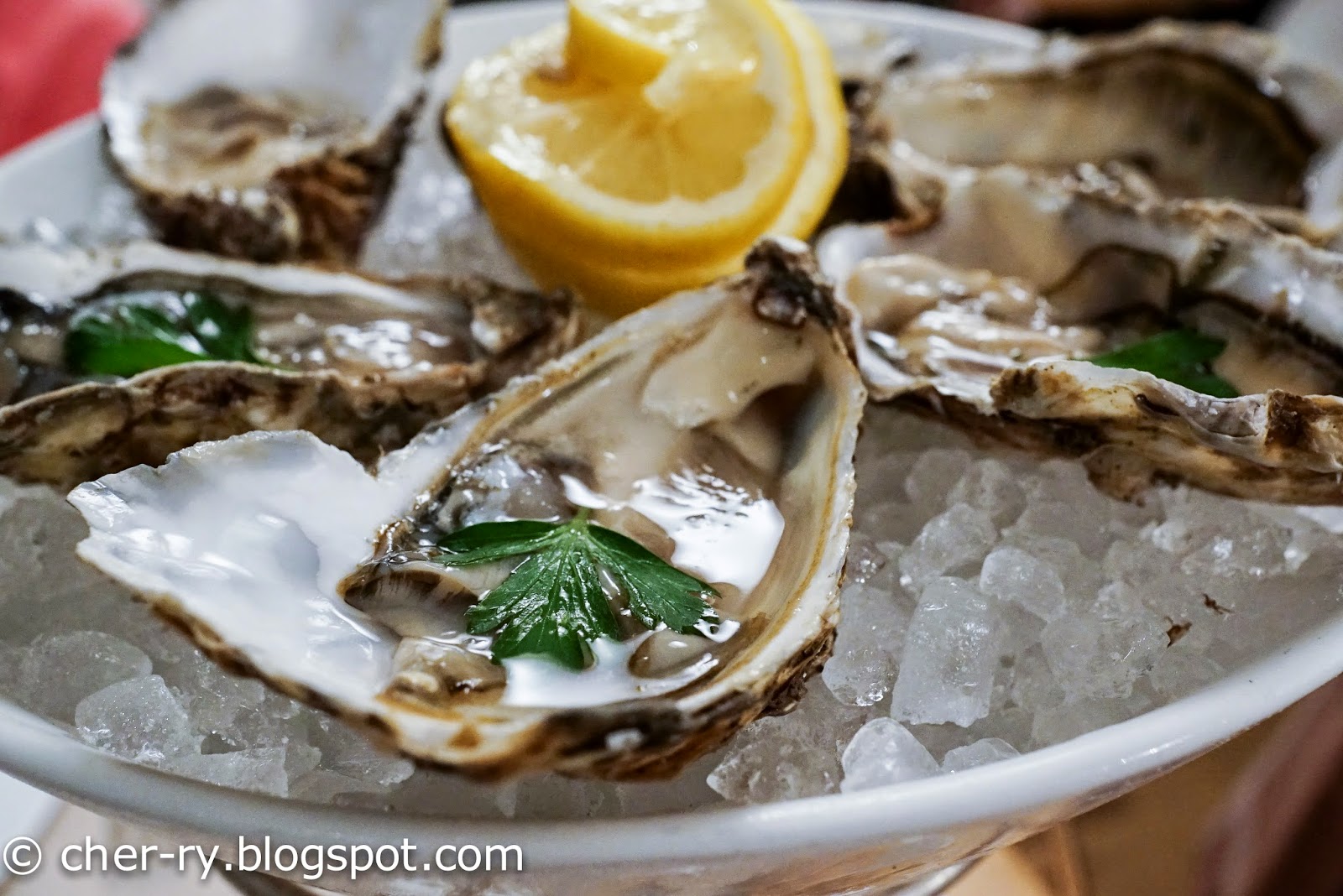 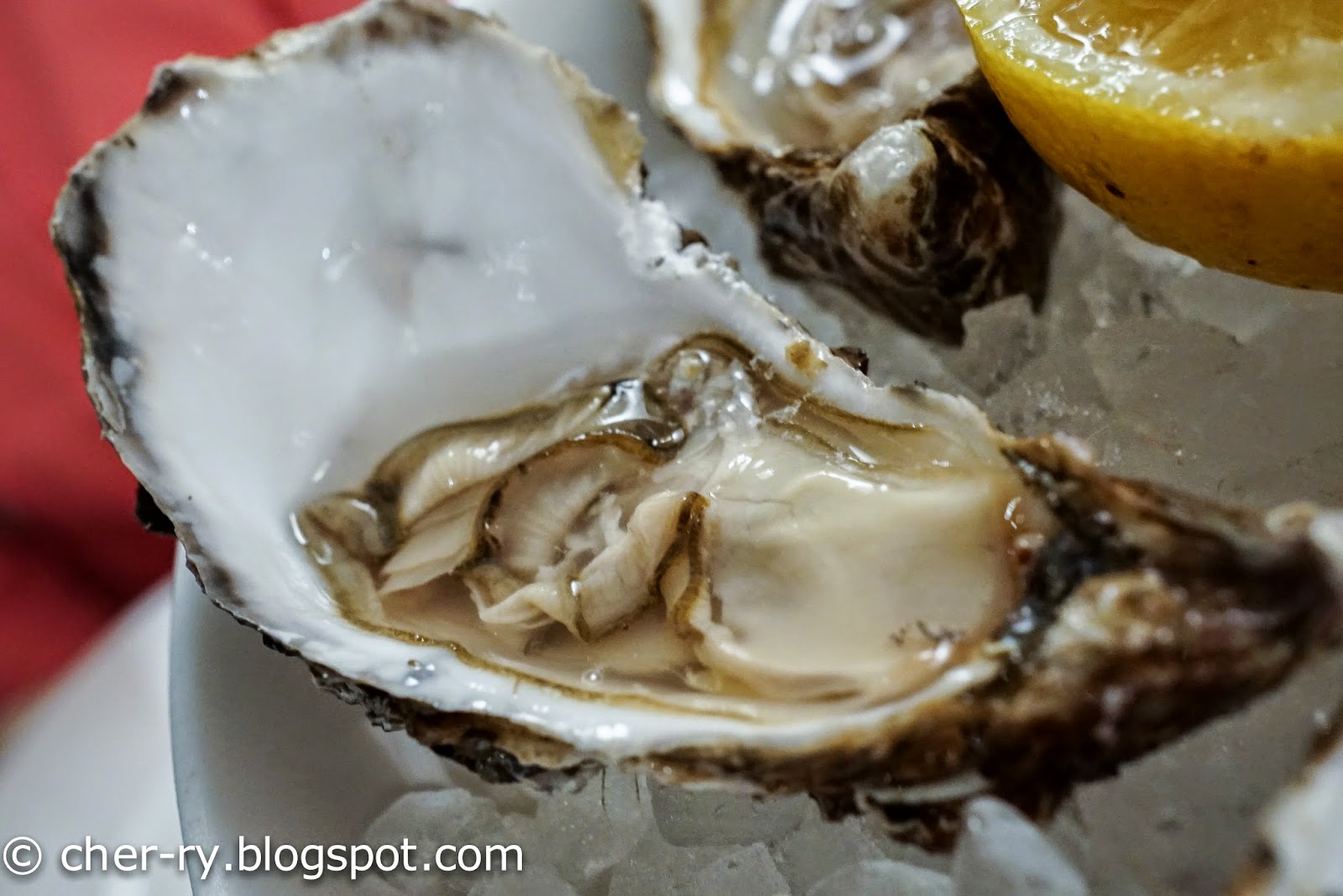 Beautifully freshly shucked oysters.....ma look!! No debris on its juicy plum flesh. Slurp and all gone. :))))) Oysters are like the best 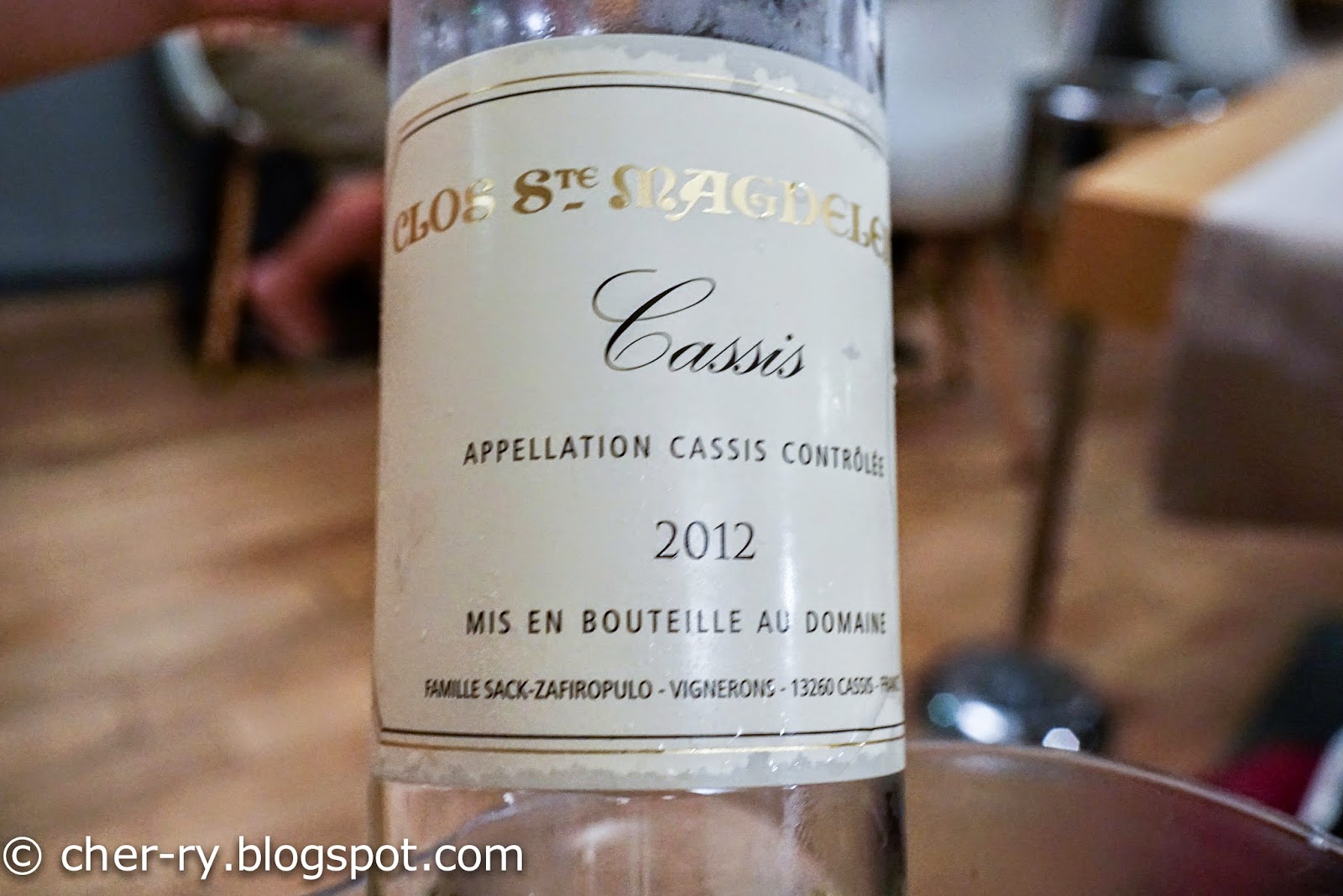 We were in Cassis earlier that day and decided we should have a bottle :)))) Provence wines are so drinkable and very easy on the palate. The high minerality of the soil gave the grapes such beautiful character and provence wines pair so well with seafood....all the time...never fail....:))) 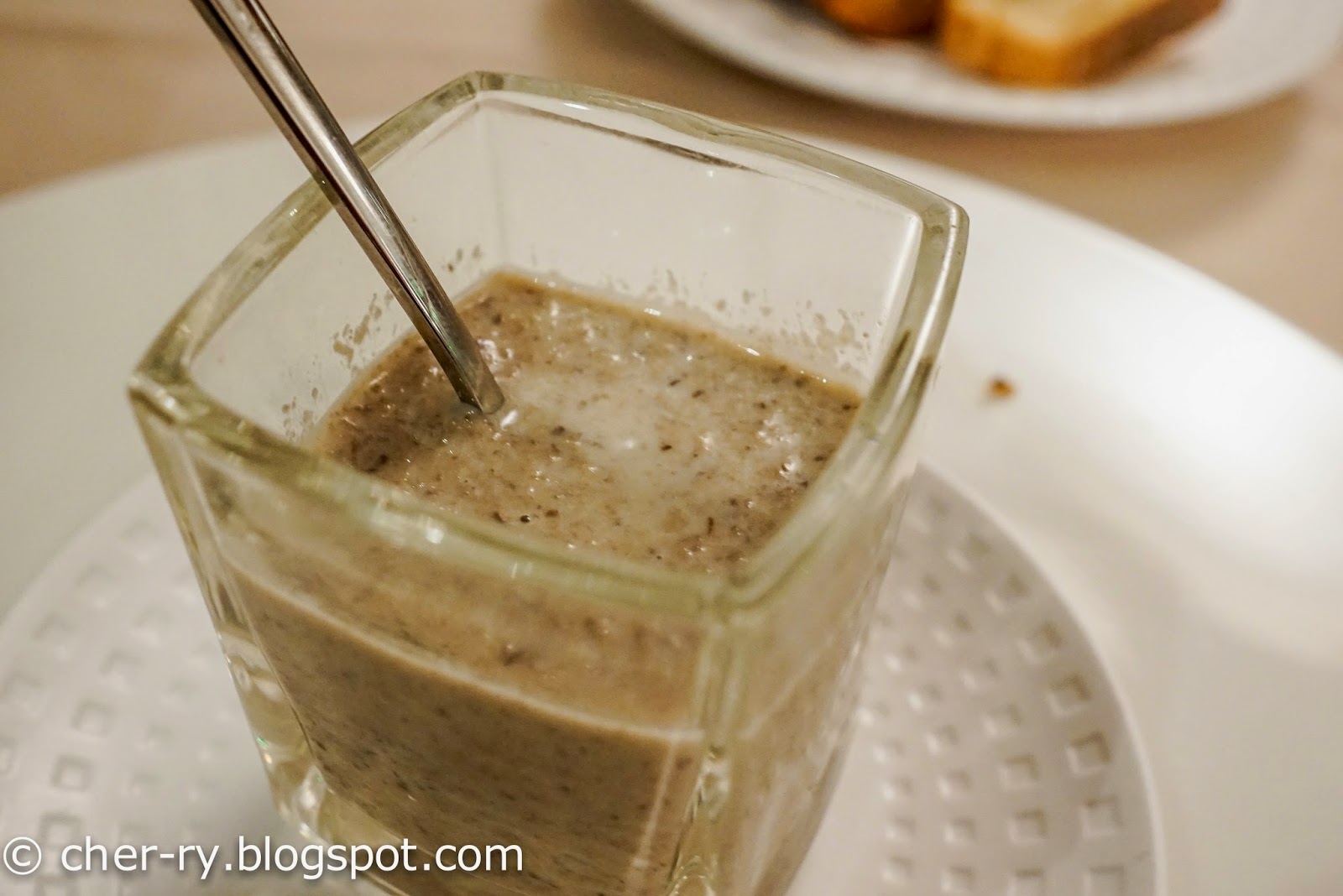 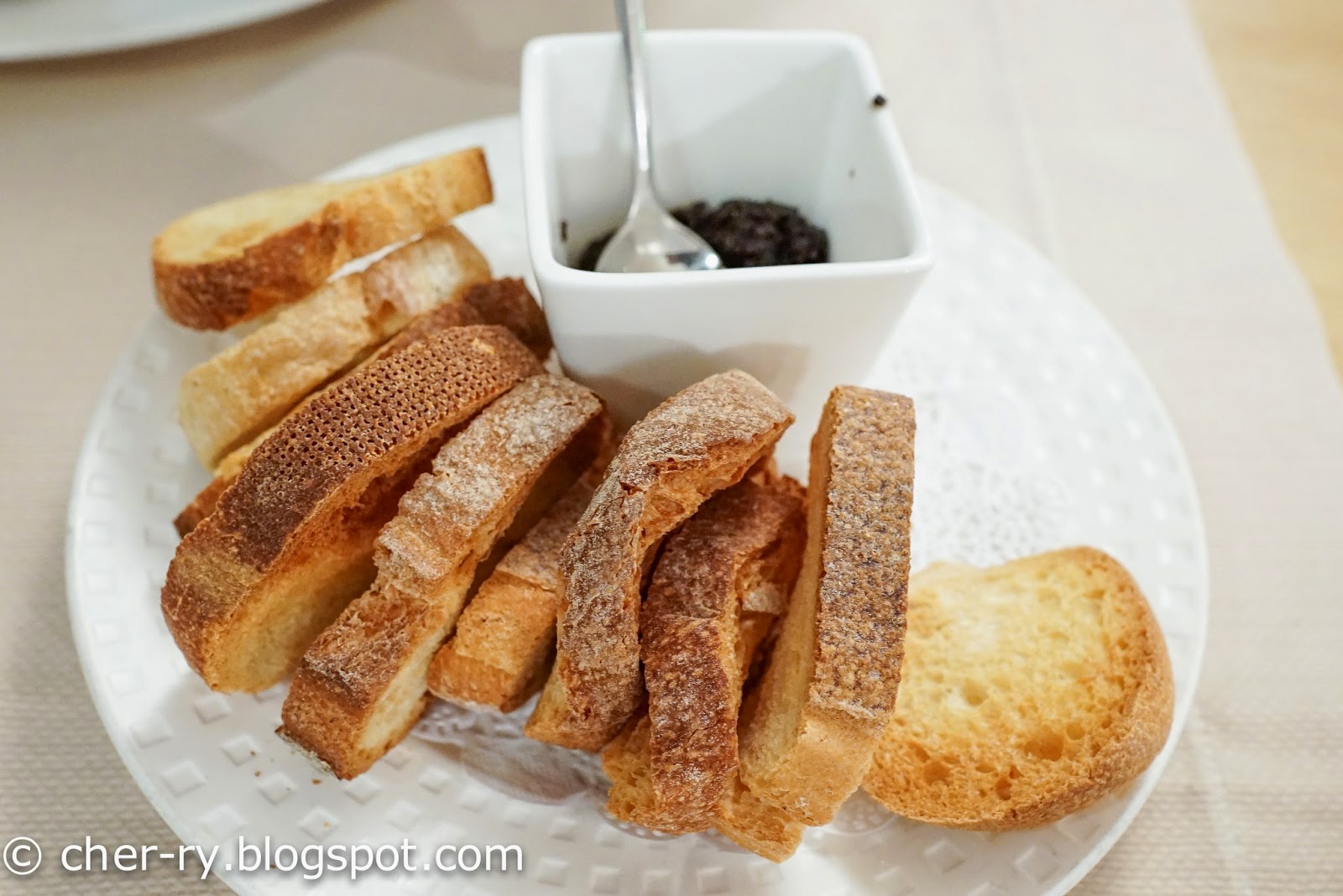 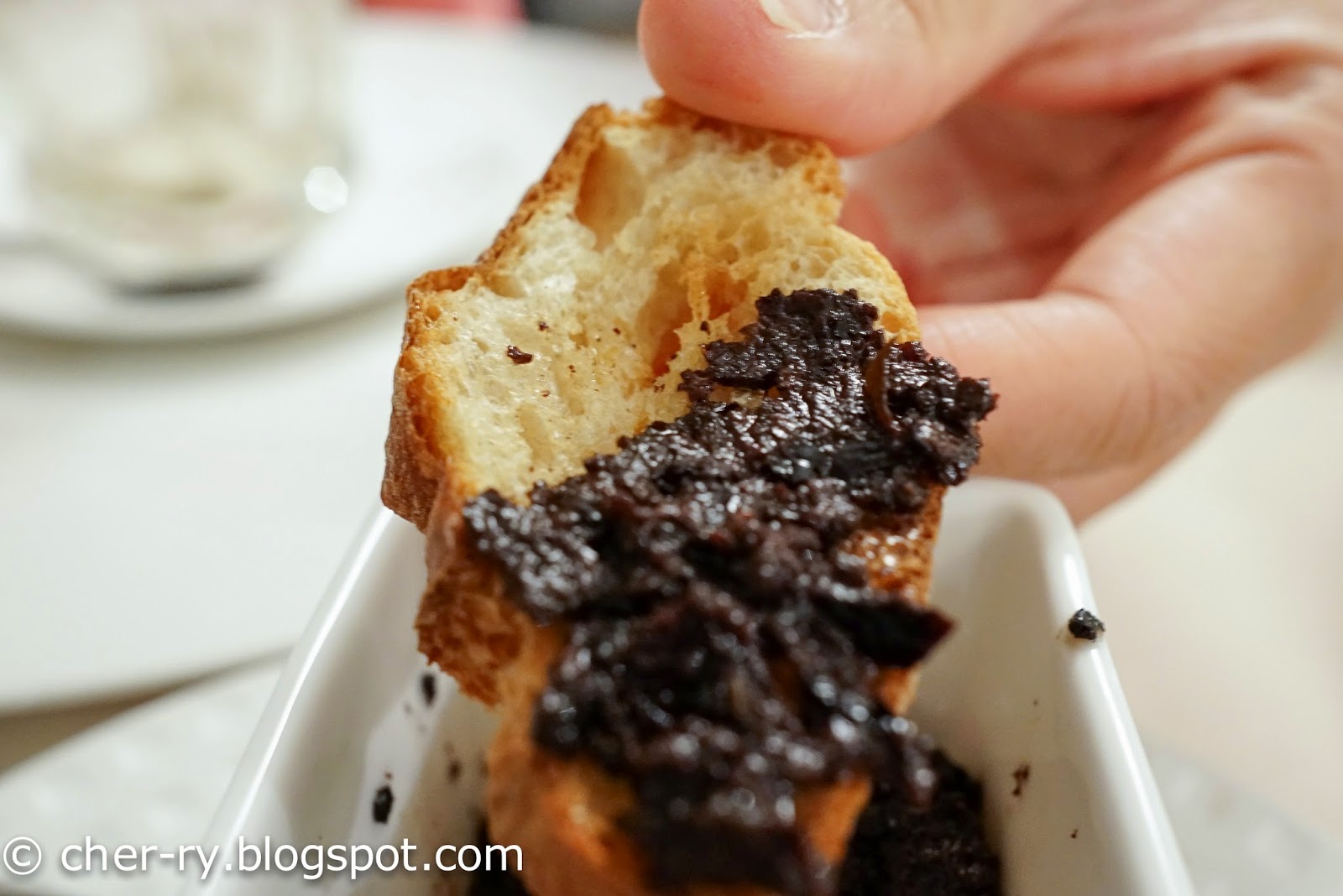 oh yumsss!!!! croutons and black olive paste.
I can feast on this and this alone!!! 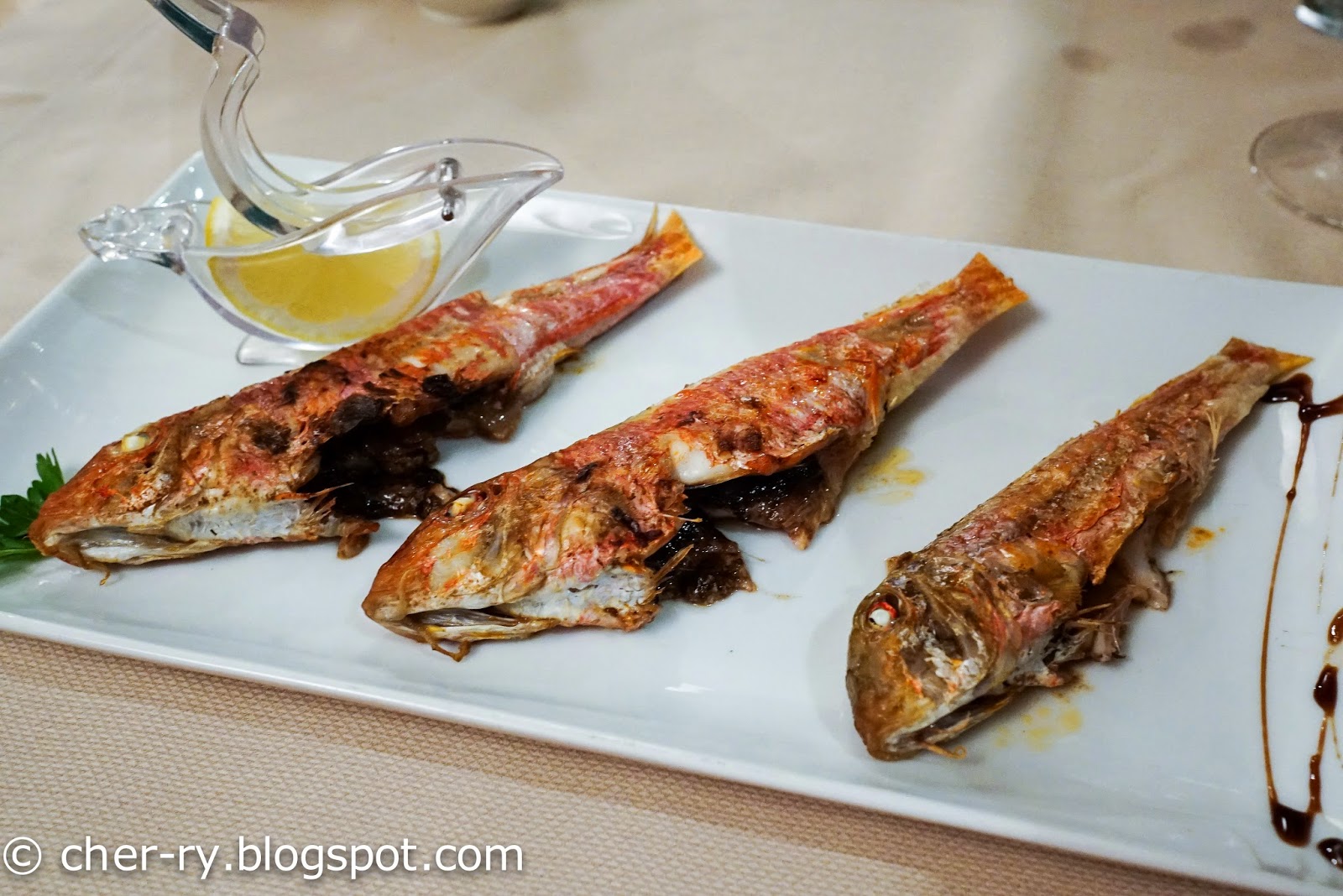 and the grilled red mullet arrived......with nothing with a wedge of lemon.
look at all those black glorious stomachs and roe.....it's bitter but according to JS, that's the best part. Just like how he enjoyed Abalone livers.....Good la, Watever that I don't eat he loves.... 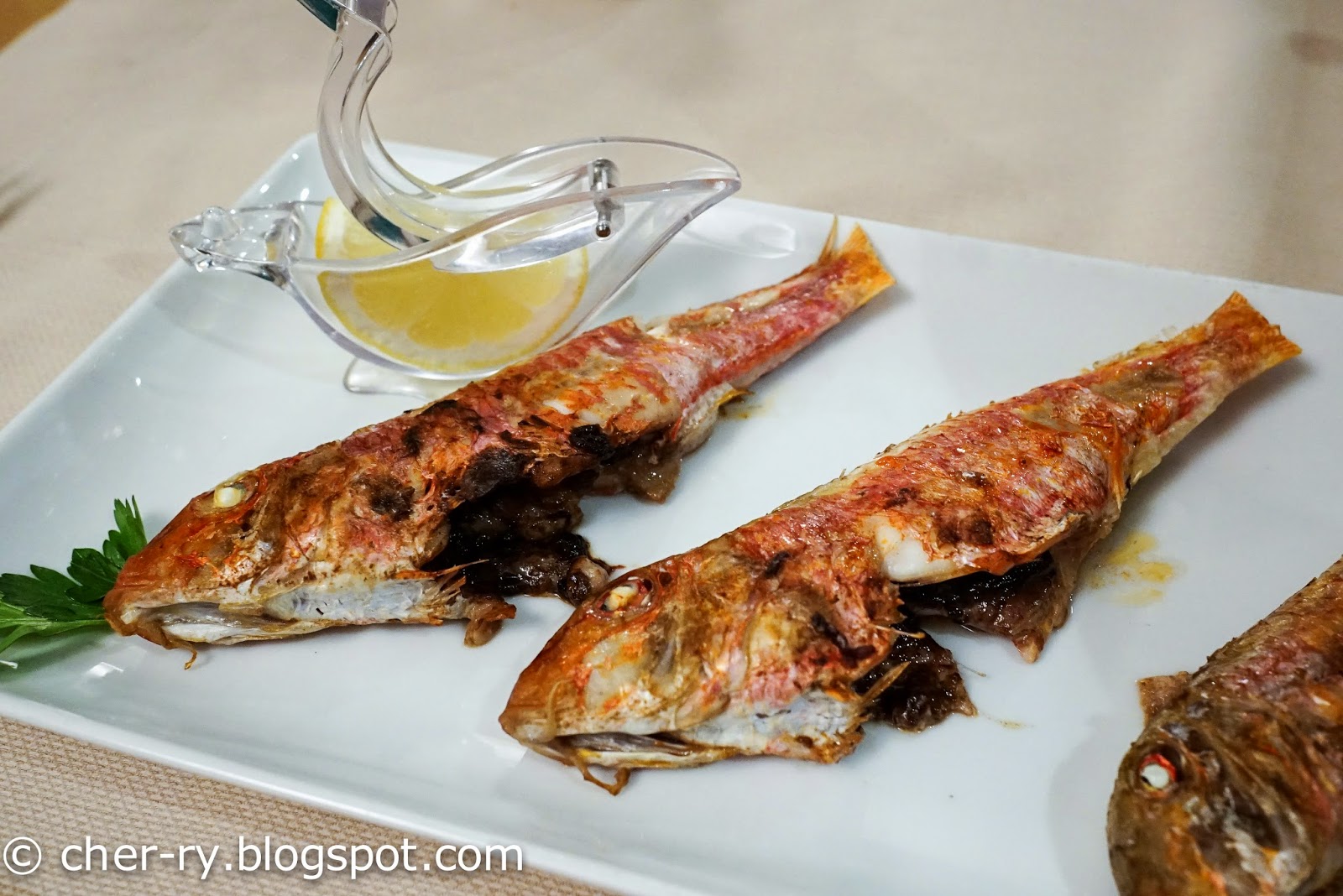 According to JS, the red mullet fish feeds on the peat from then ocean bed, very similar to the Japanese Sanma fish. In Msia the famed super bony Ikan Terubuk has got this bitter stomachs which is so addictive. Guess every culture enjoy this part of some bony fish?

Grilled fish in Marseille is just so delicious, it's out of body. The fishes are usually fatty and juicy with this superb sweetness. Even when it's working its way on the grill, the aroma can really make u beg for ur meal to be served immediately!!! 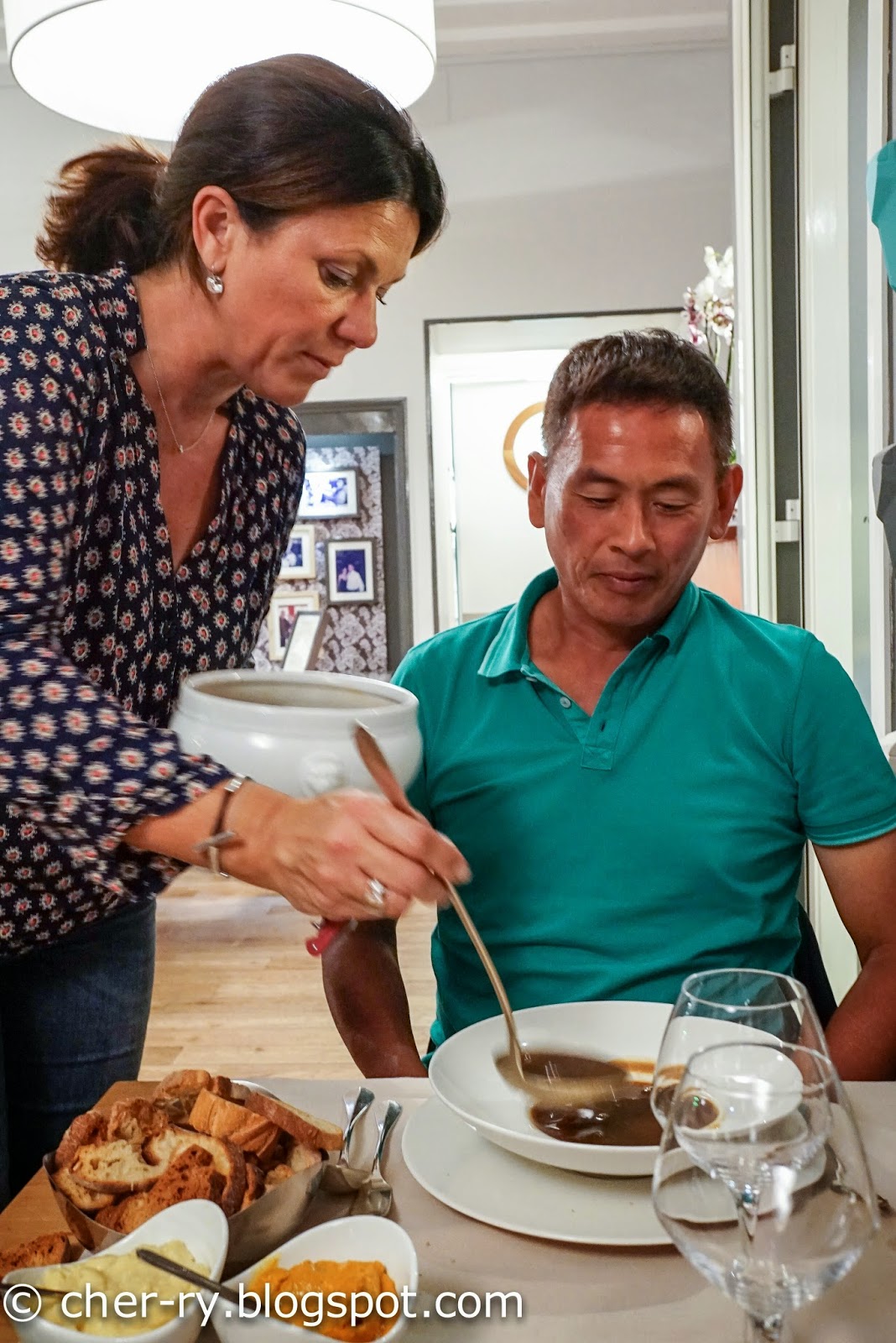 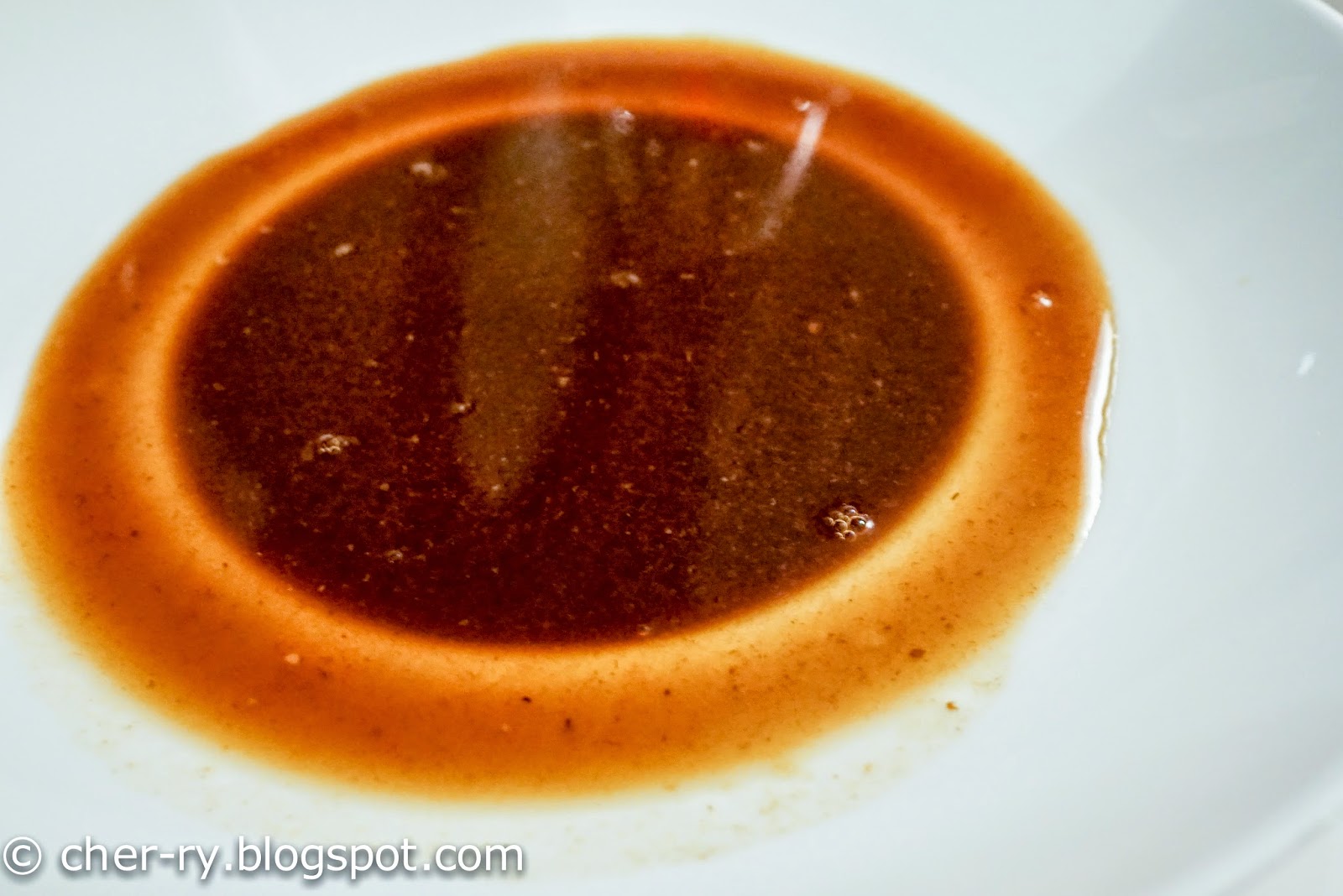 Looked so simple eh? the taste was.....WOW it's like I've eaten some power packed super intense fish soup. U gotta try it to understand. 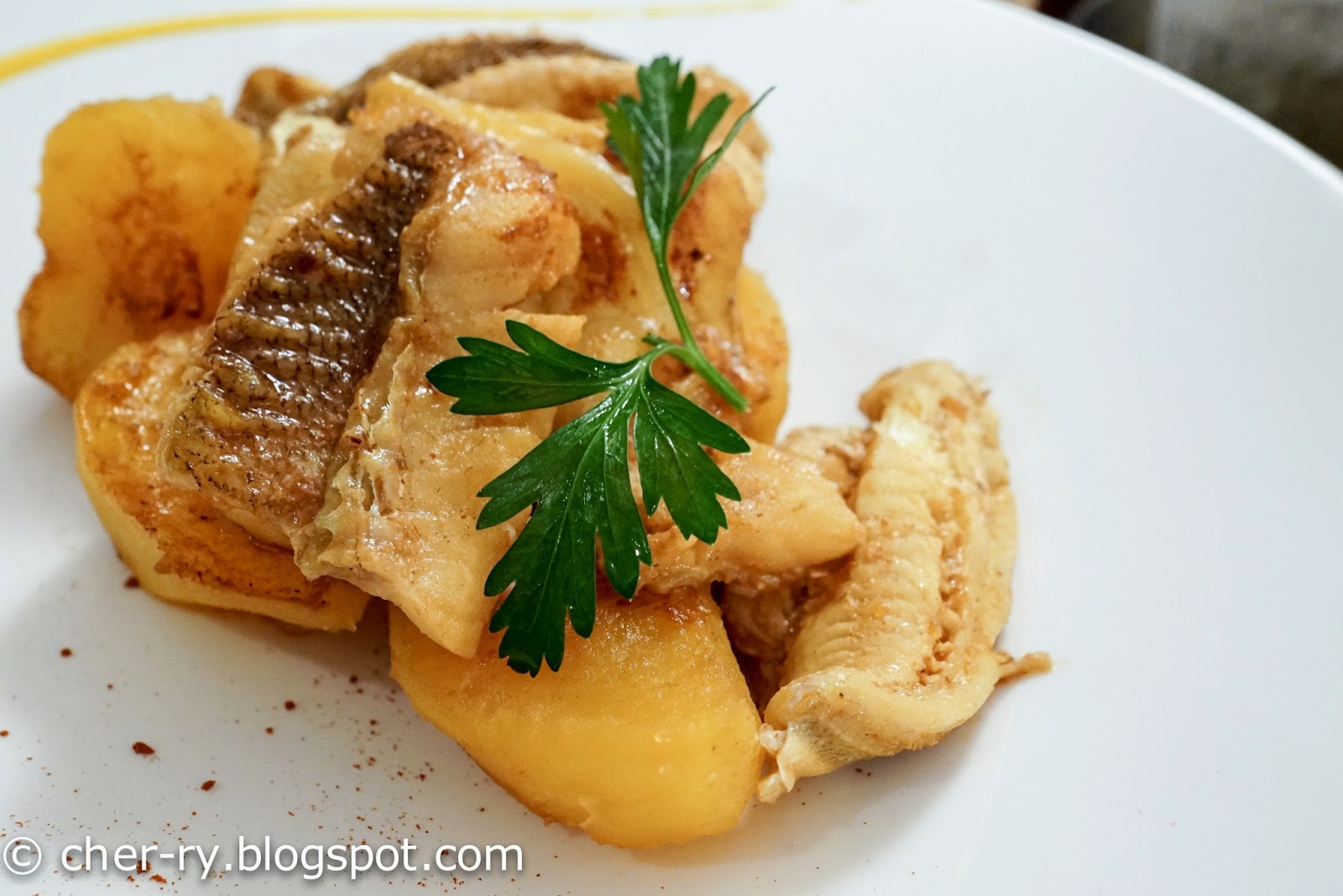 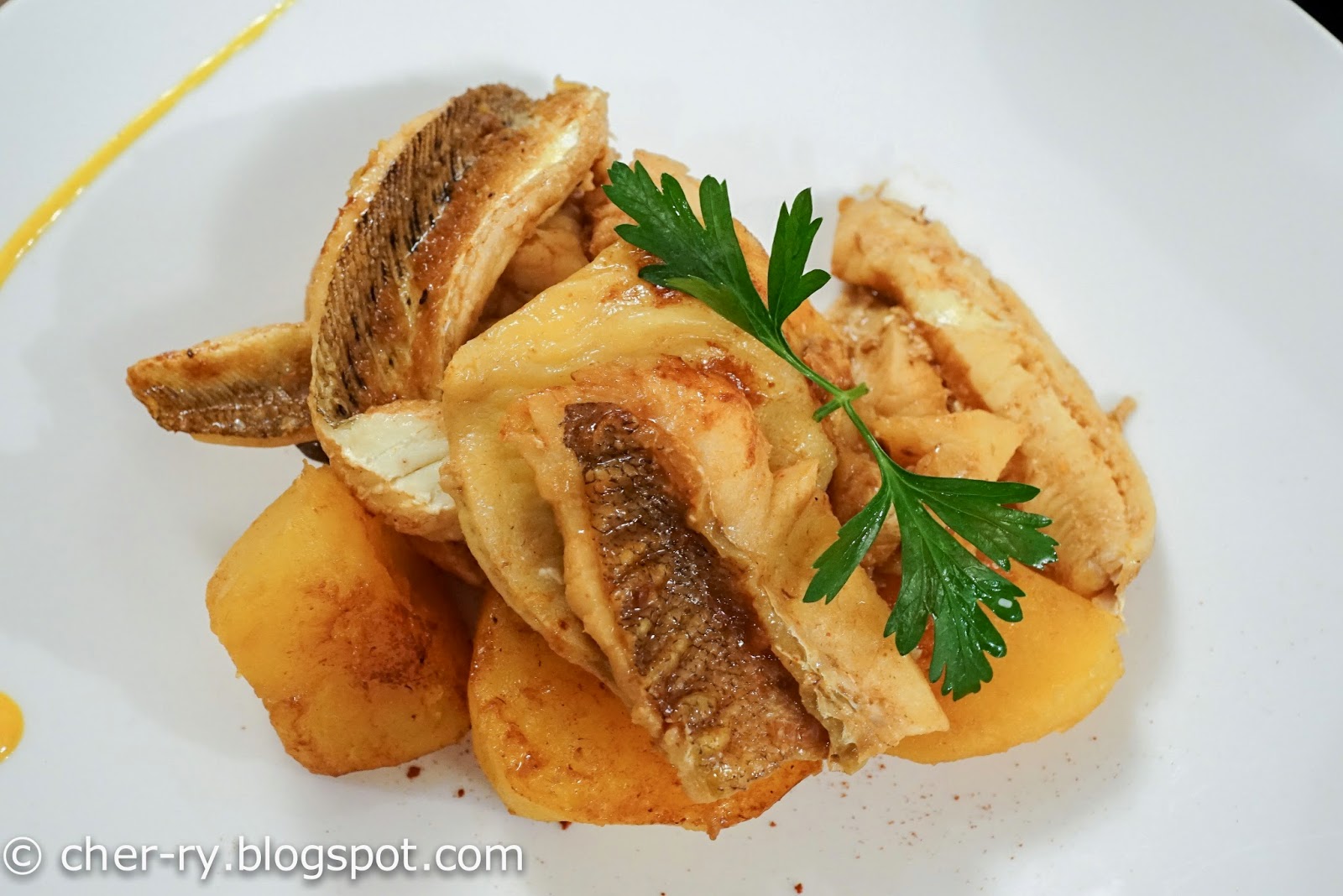 all the bony coral and rock fish were served on its side, with the potatoes. This way u'll enjoy the juicyness and texture of the fish without over-cooking it inside ur hot soup. 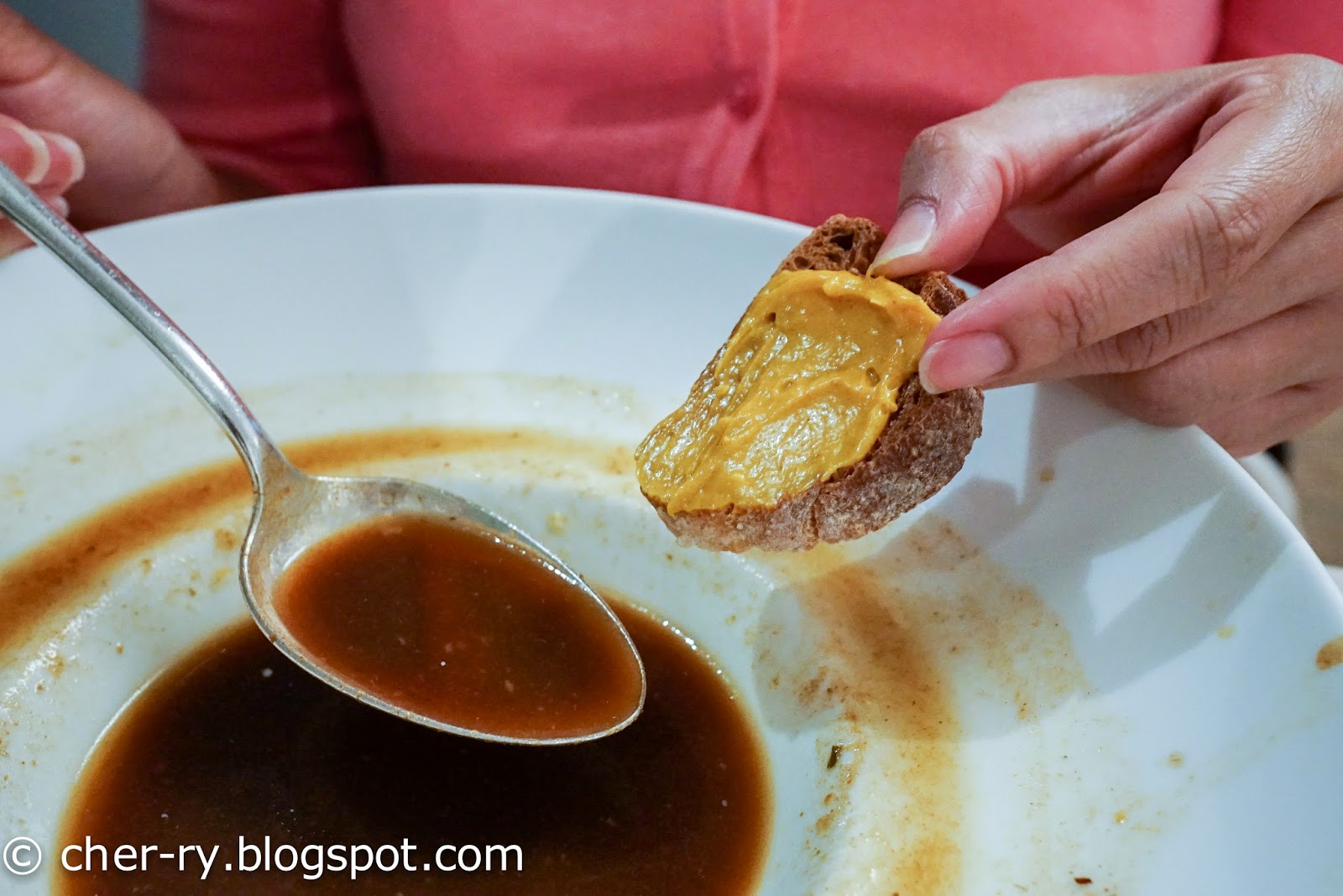 homemade aioli with more croutons. Can't remember how many servings of bouillabaisse that we had!!! I guess until we couldn't stand up anymore. 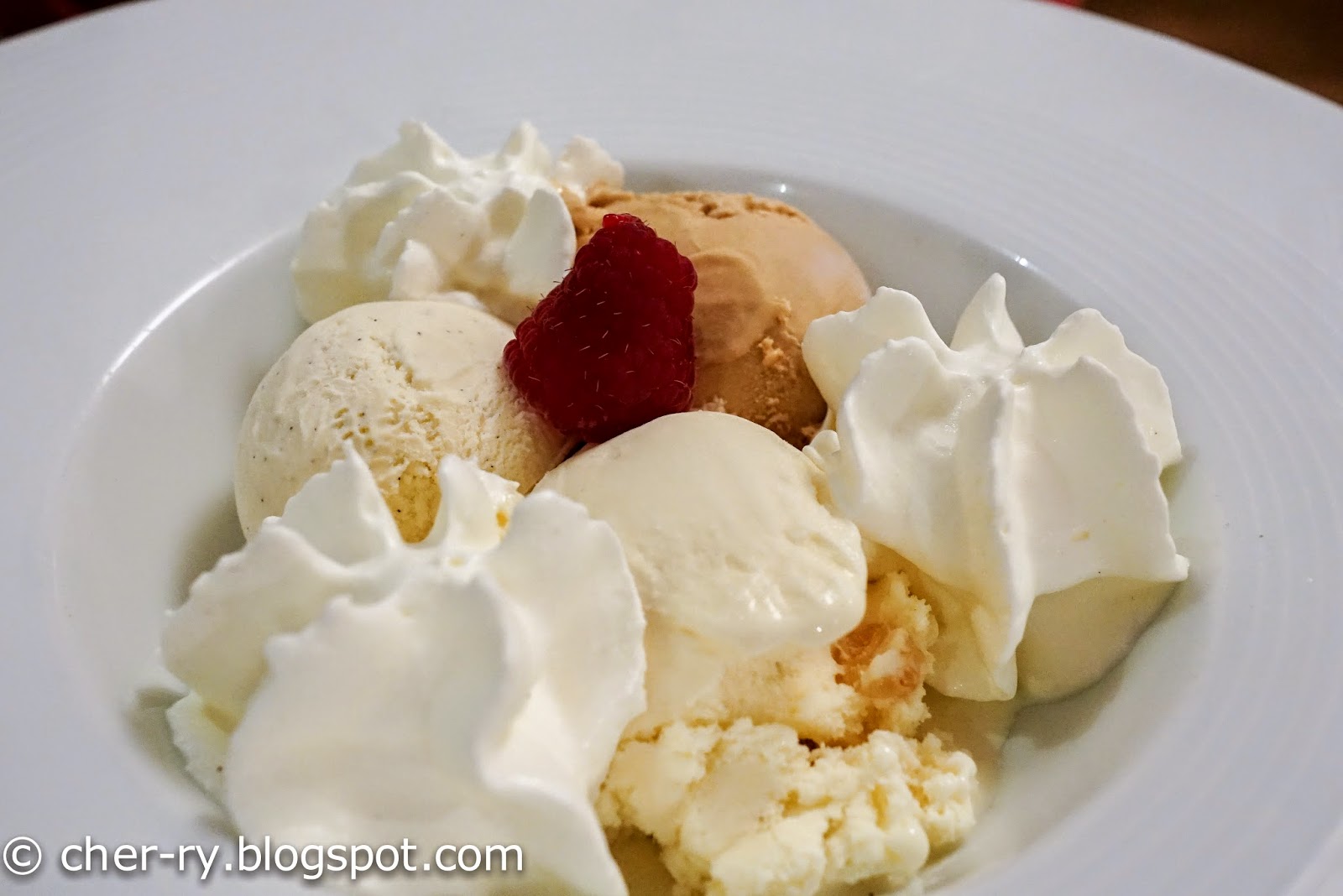 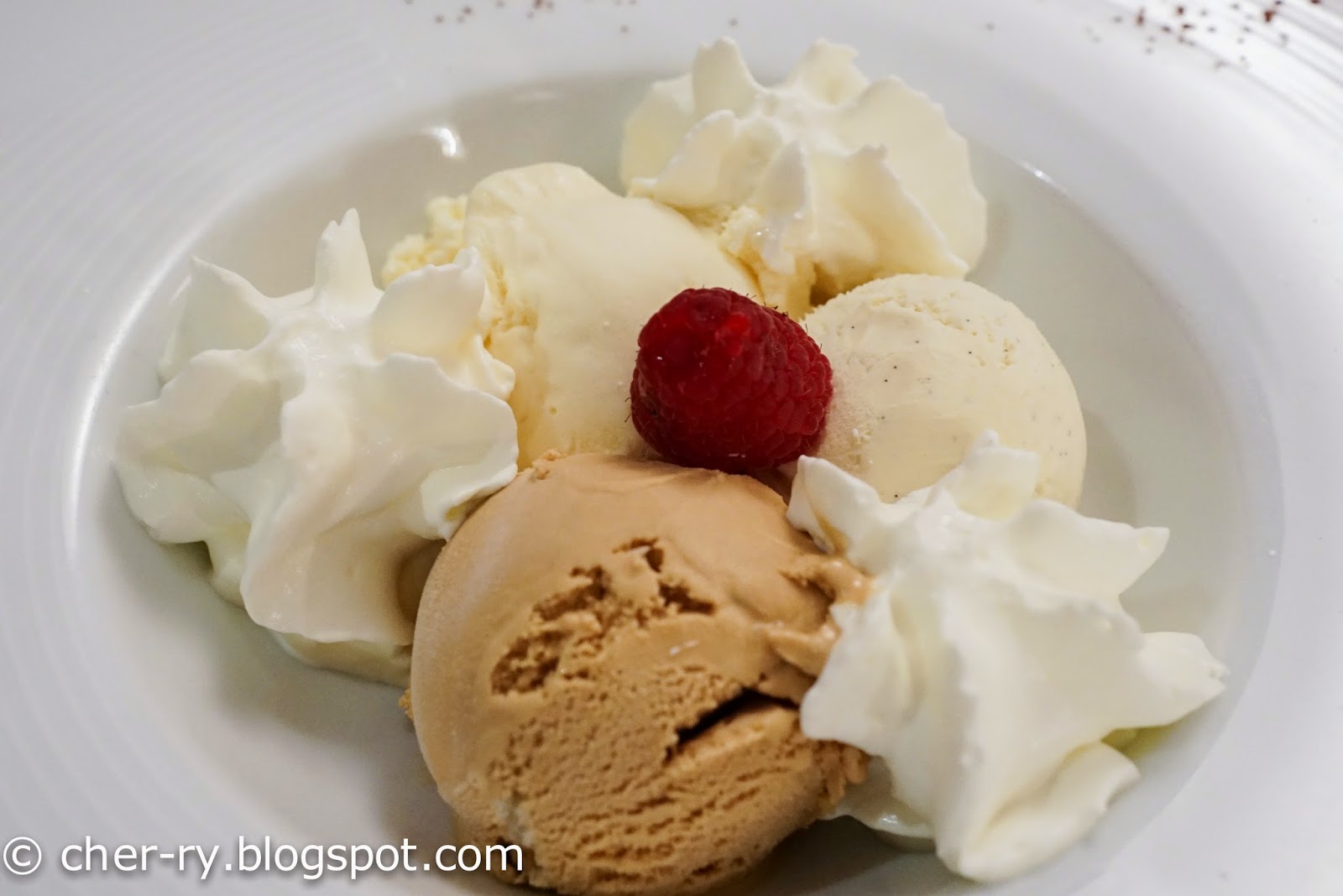 and Monkey still wanna enjoy her Creme Glacee after the wonderful meal.
JS >.<
I lurve it how creamie the ice creams are in Europe....plus all the alcohol flavoured ones....hehehehehe. Ice creams + alcohol = best lar!!! 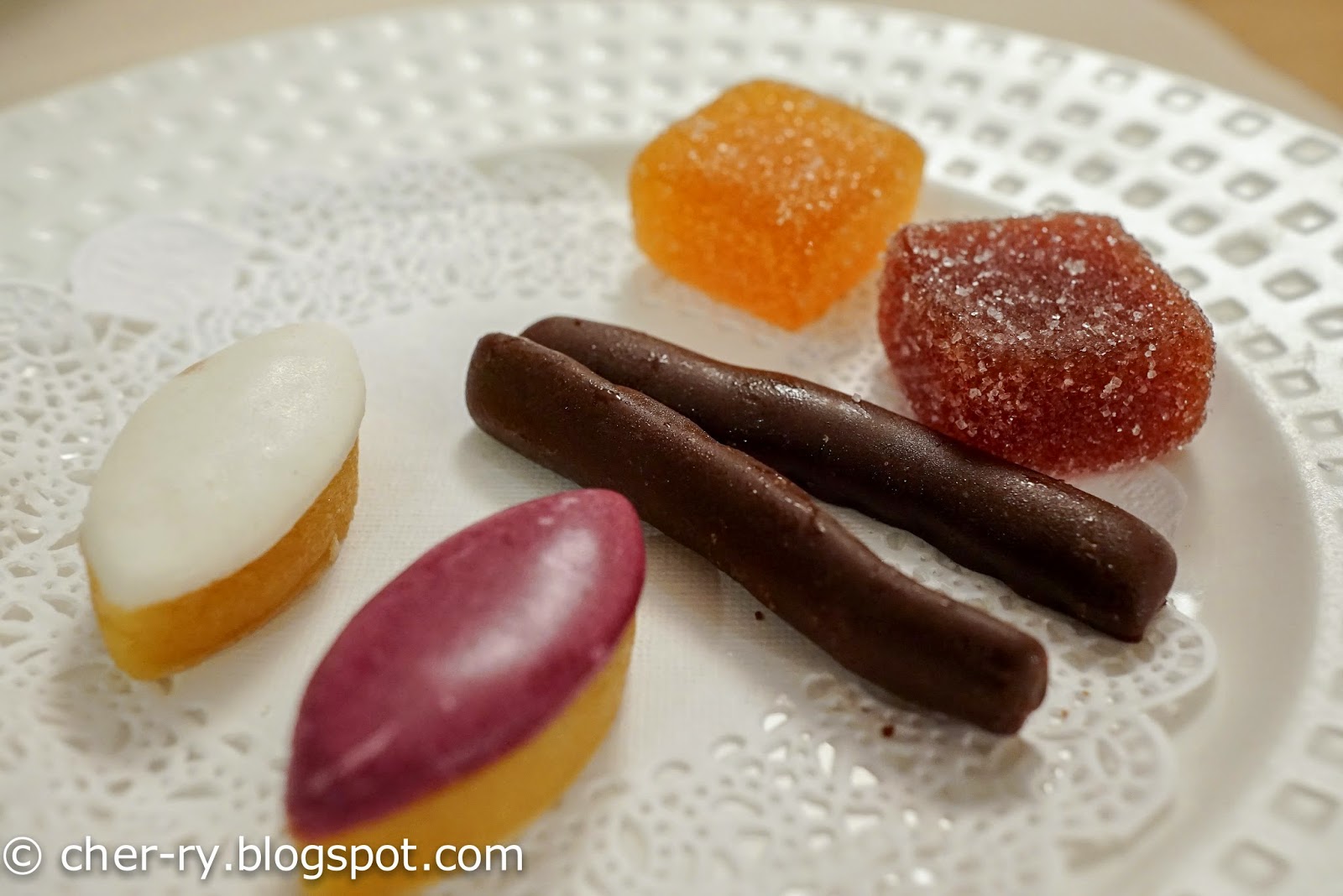 petit four which we didn't finish either.

There are some merchandise sold at the restaurant, such as bottled fish soup. Nope, we didn't get any. To lug the bottles of wines and fish soups back to Paris? Oh I think I'll come back here to enjoy the dishes in the near future instead. 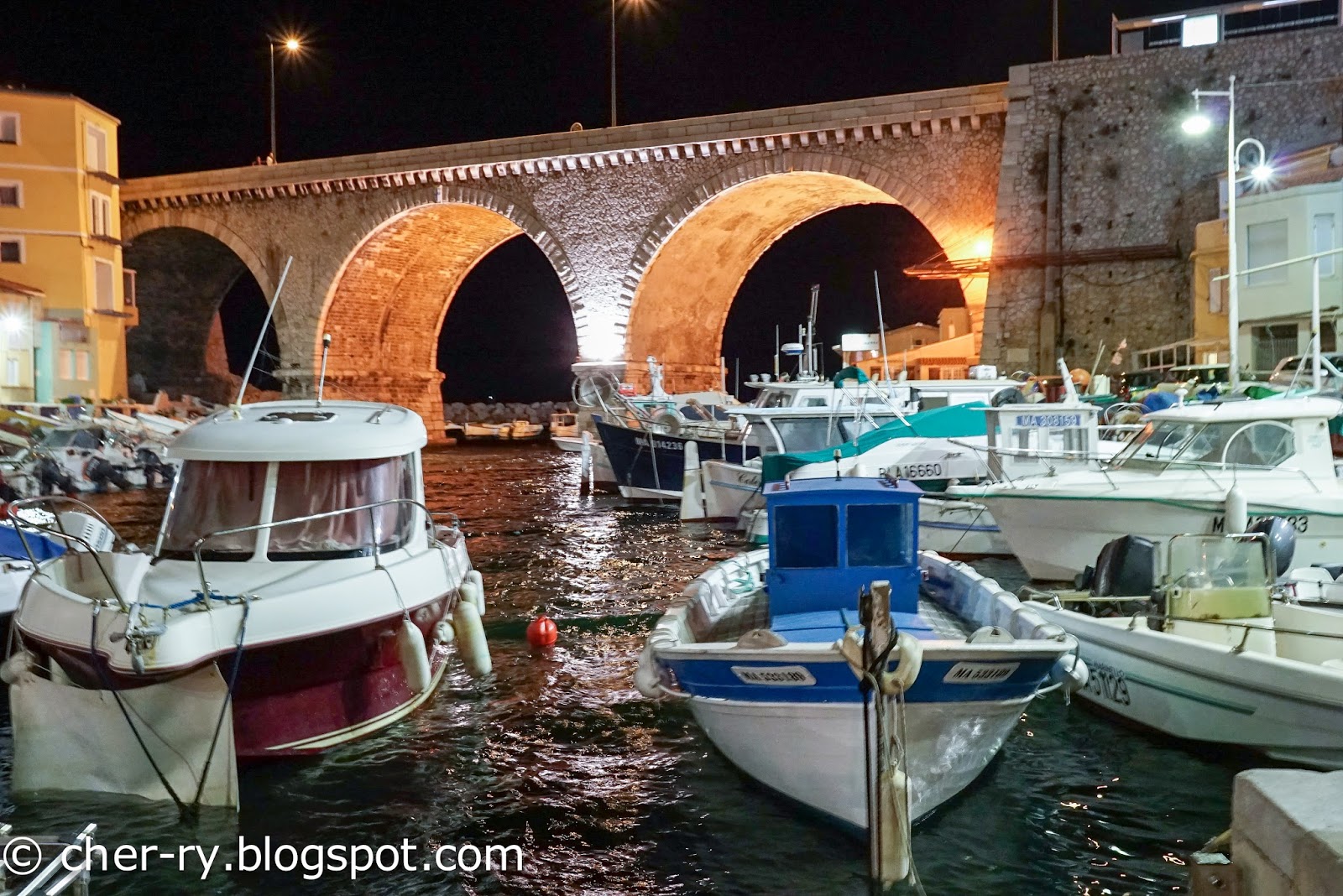 As we were indulging in our very provencal dinner, the wind outside begun to pick up speed and momentum. I could hear the howling winds and was already wondering how to get home.....weather forecast states that the mistral wind will start the next day. JS the fearless one calmed Monkey down and said....fear not!!! I've been through worse conditions than this. Trust me!!! and held out his hands.

It's our first experience with the Mistral and it was quite an experience. The high and low differential pressure in the region caused air to be pushed through the narrow Rhone Valley, thus forcing it to move faster and ferociously, hence extremely strong North to South wind.

Mistral wind is an important feature of the Rhone Valley as this dry and strong wind affects the climate and microclimate of the region to a very large extend. It removes moisture from air, followed by a very very clear sky and dry weather. This is a condition required by the grapevines to produce the famous wines of the Rhone Valley.

steady as the hand can be, but you could see from the pic above that the boats and sea was moving quite violently from the blurry motion whilst everything else on land remained still. 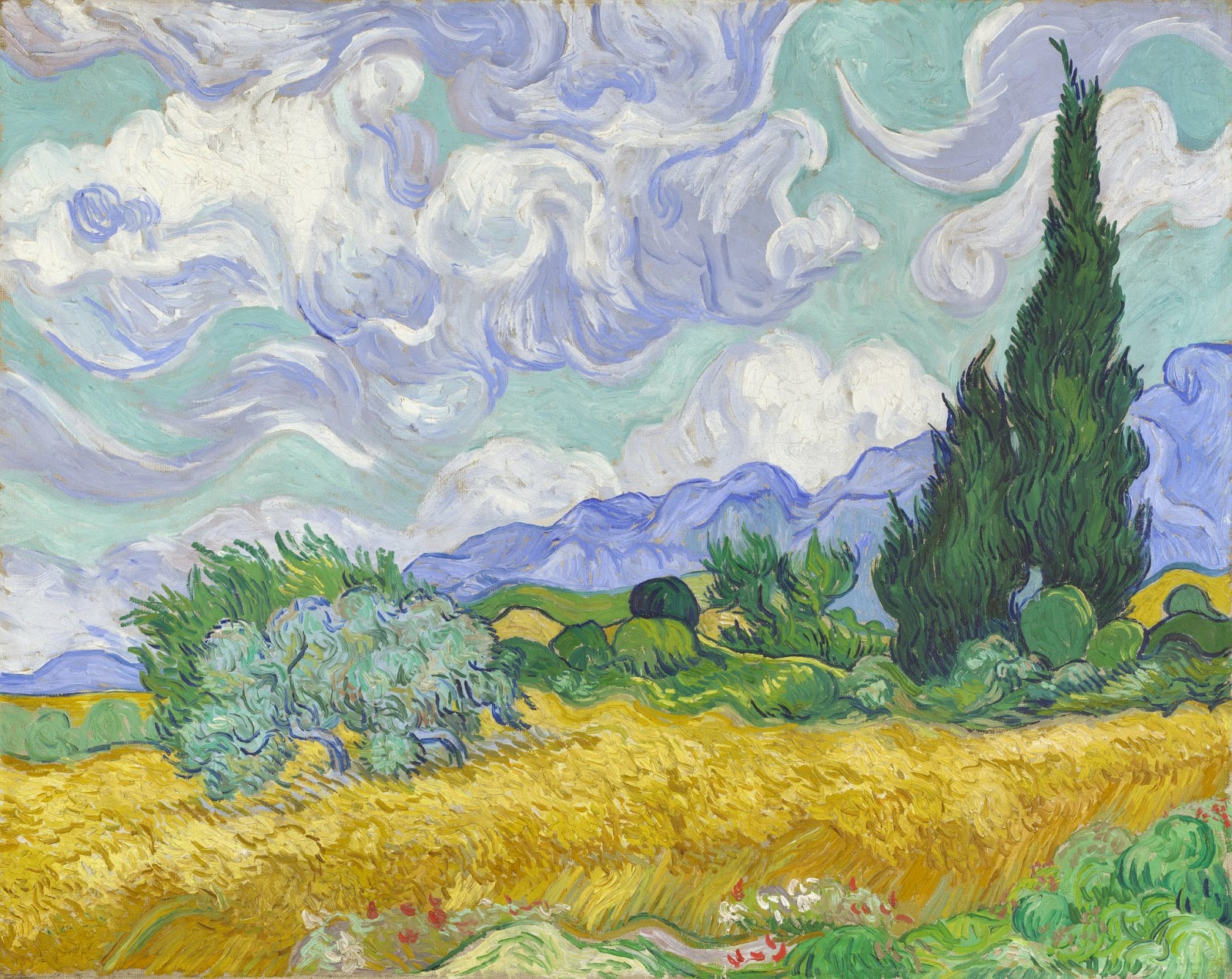 all trees in Rhone Valley and Provence exhibits a "permanent bent" caused by the Mistral winds. By looking at the direction of the bend, one can always know which direction is North. Even the famous mad artist/painter Vincent Van Gogh who spent a considerable amount of time in Provence, painted the nature of the Mistral, such as the above painting of Wheat Fields done in St. Remy.

I will keep it for another posting on his various great works in Provence, including the must see "Starry starr night" where the Cypress trees were bent. JS and Monkey went down hunting all his works in St. Remy for a day. Call us mad but no one can be madder than Vincent.... 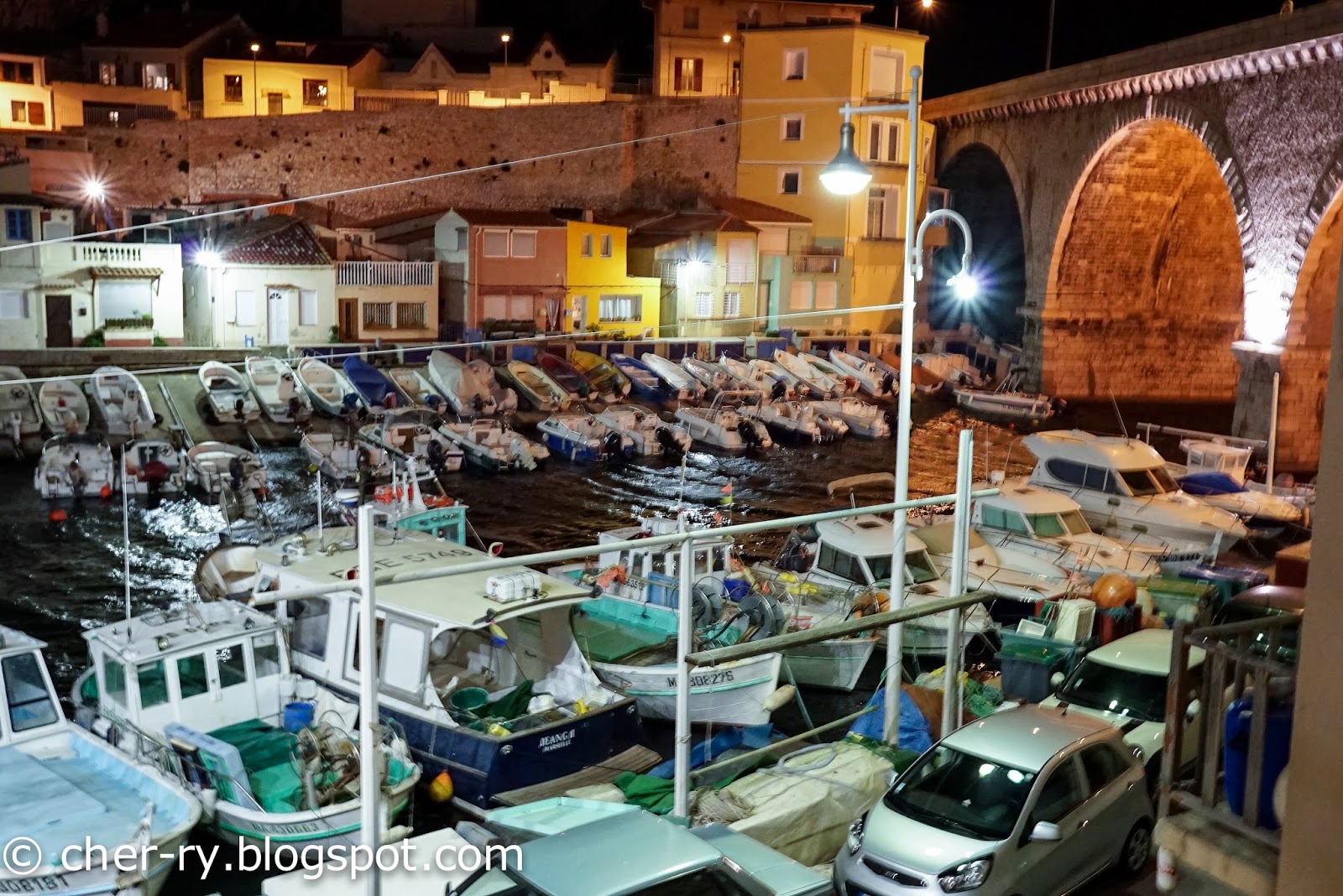 many of the boats were banked up like stranded whales, in preparation for the onslaught of the Mistral wind which can reach gust of up to 100km/h! Once we have climbed up into the bridge there, we tried our very best to stand still.

For the first time in my life, I was clinging onto a bus stop. The man who told me "FEAR NOT" earlier, was also clinging onto the pole while trying to hold me still, from flying off.

that nite after dinner, Mistral was only goin at 52km/h. The following morning when we departed Marseille in the morning, it was goin 100km/h. We felt it through our TGV ride back to Paris. :)))