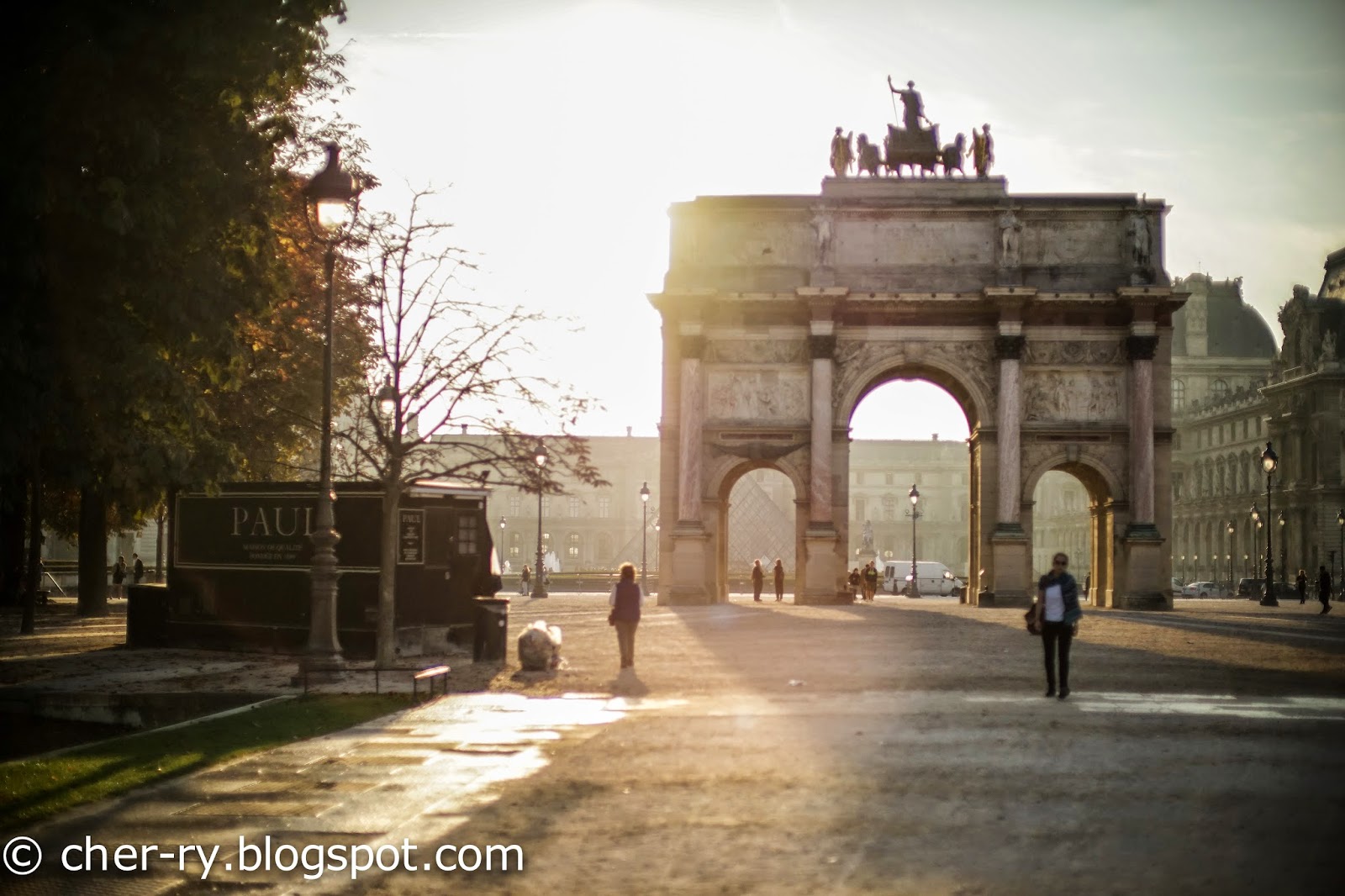 The beauty about midnite flight is u arrive at your destination early the next morning. I guess this apply to destinations like Europe and Japan. The time differences and our Msia GMT is just perfect whenever travlling to these countries.

The flight to Japan is 11.35pm and u arrive the next morning at 7.15am Japan local time. Just perfect to hit the Fishmarket for some awesome sushis!!!! As for Paris, the plane takes off from KLIA at 11.55pm and arrives the next morning at 6.20am. So u will get into the city by 7.30am, dump ur luggages and time for......COFFEE AND CROISSANTS!!!! 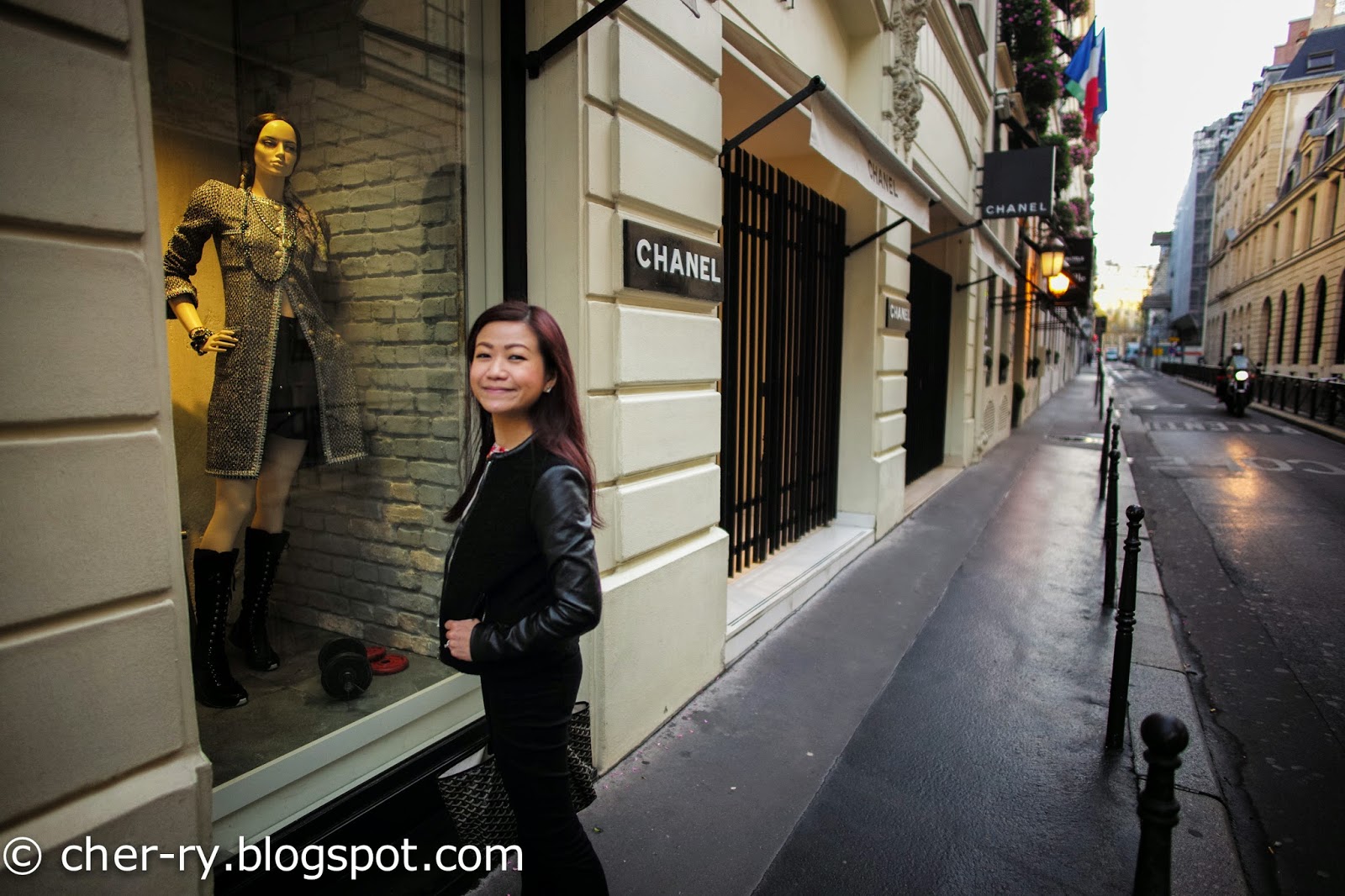 Sorry had to stop and check the windows out for a while. We were staying around the Vendome/Opera area so it's rather dangerous to the pocket as we needed to walk through Rue Cambon everyday to get somewhere. Hiak hiak hiak....next to the display window, with its black gate is Madame Coco Chanel's apartment. Yep we will visit it the next trip. It's alwiz our mission to leave something interesting for the next trip, afterall Paris is our annual destination.

Though it's her apartment, the unit upstairs was more of her atelier and lounges. She didn't sleep her though but at the Ritz which was just opposite. 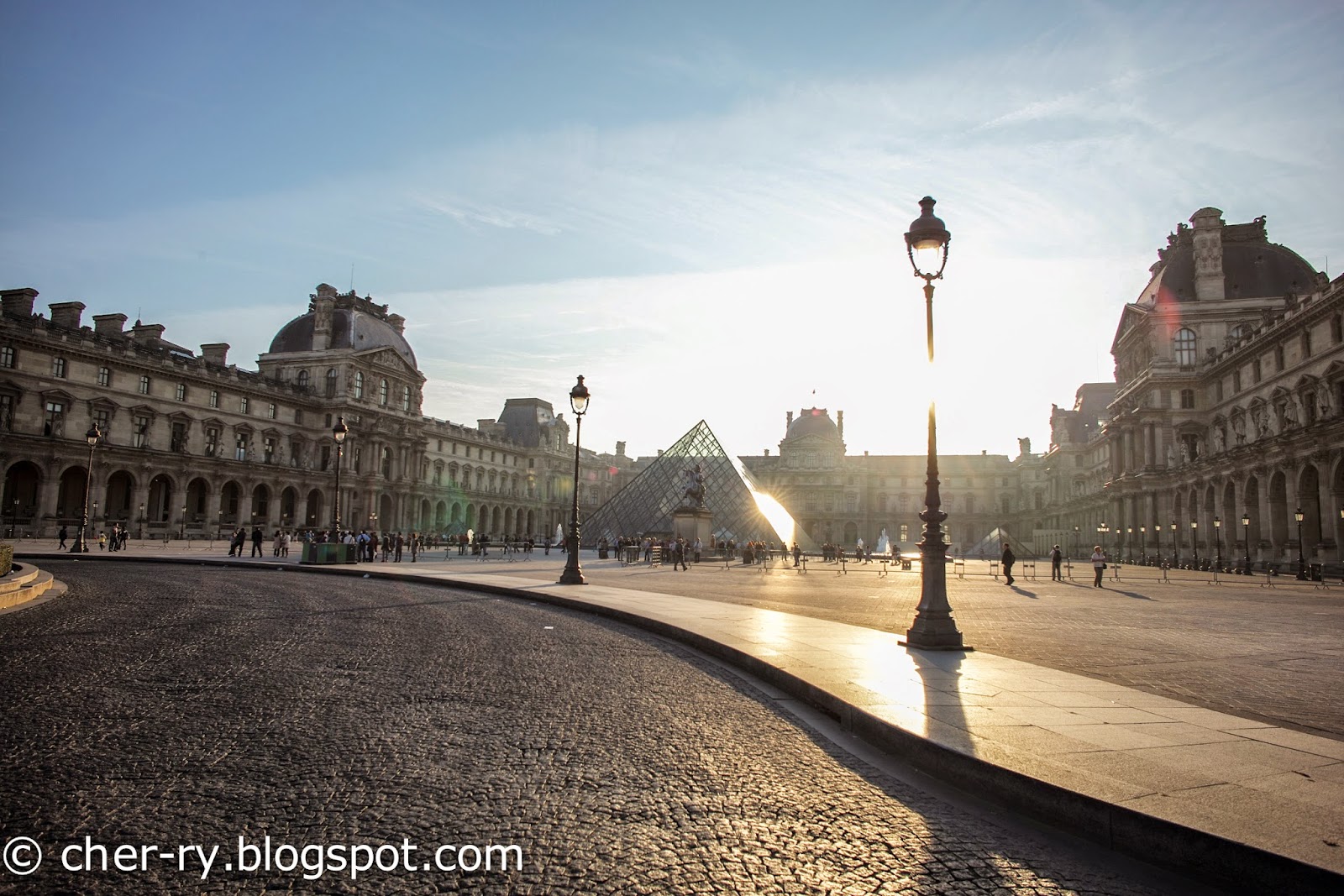 So back to our breakfast, before Monkey could yell CROISSANTS here I come, JS needed to spend some time with his new gadgets bcoz the sun was just so perfect.

so he tested many many shots as the sun rises from behind the Louvre. He's now an expert with taking pics INTO the SUN. 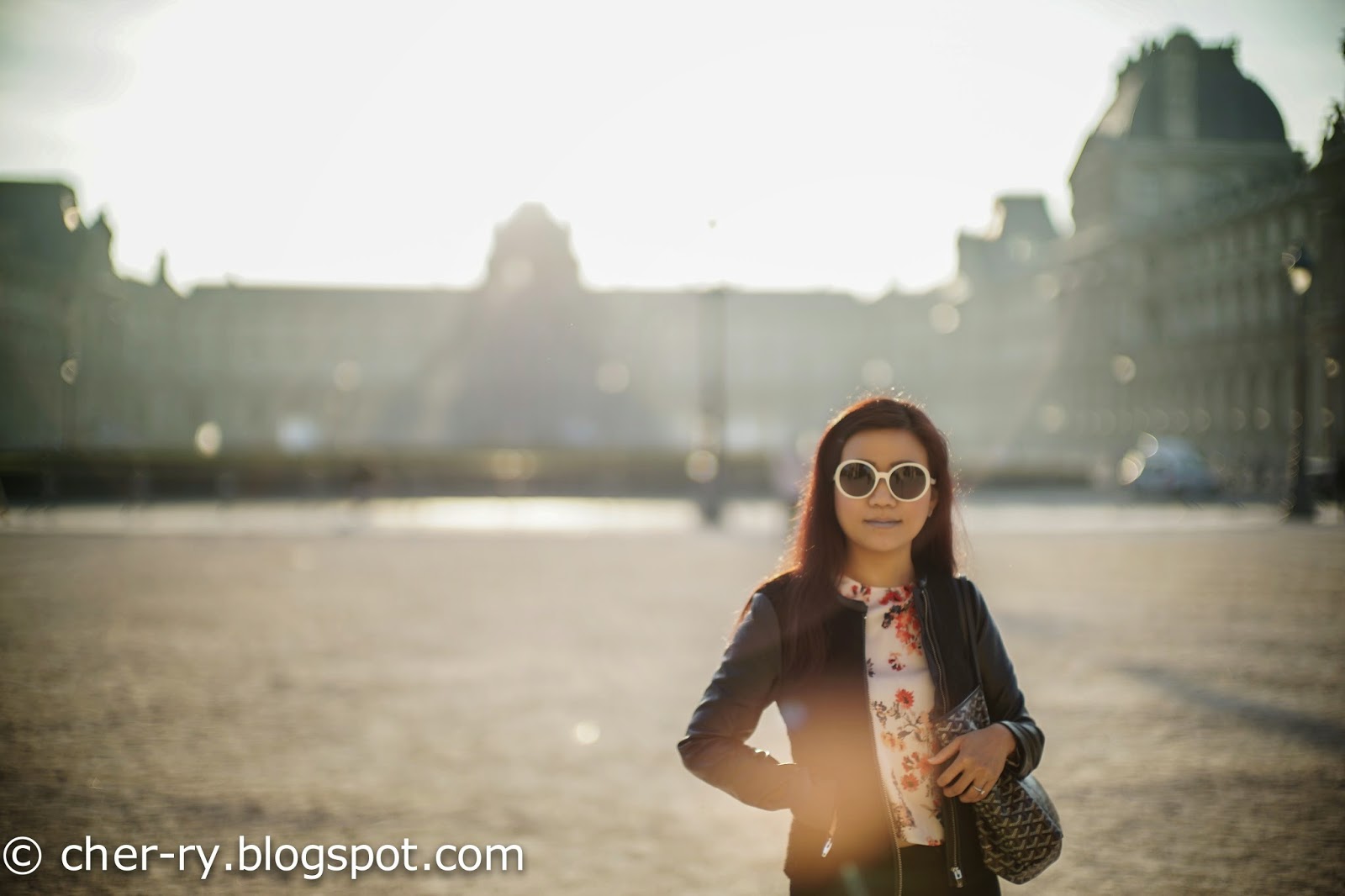 as usual, poor hungry me had to be his test subject.

JS: "But but....u had so many sticks of satays and your specially ordered Roti Pratha for supper followed by a whopping plate of Nasi Lemak for breakfast!!!!!." 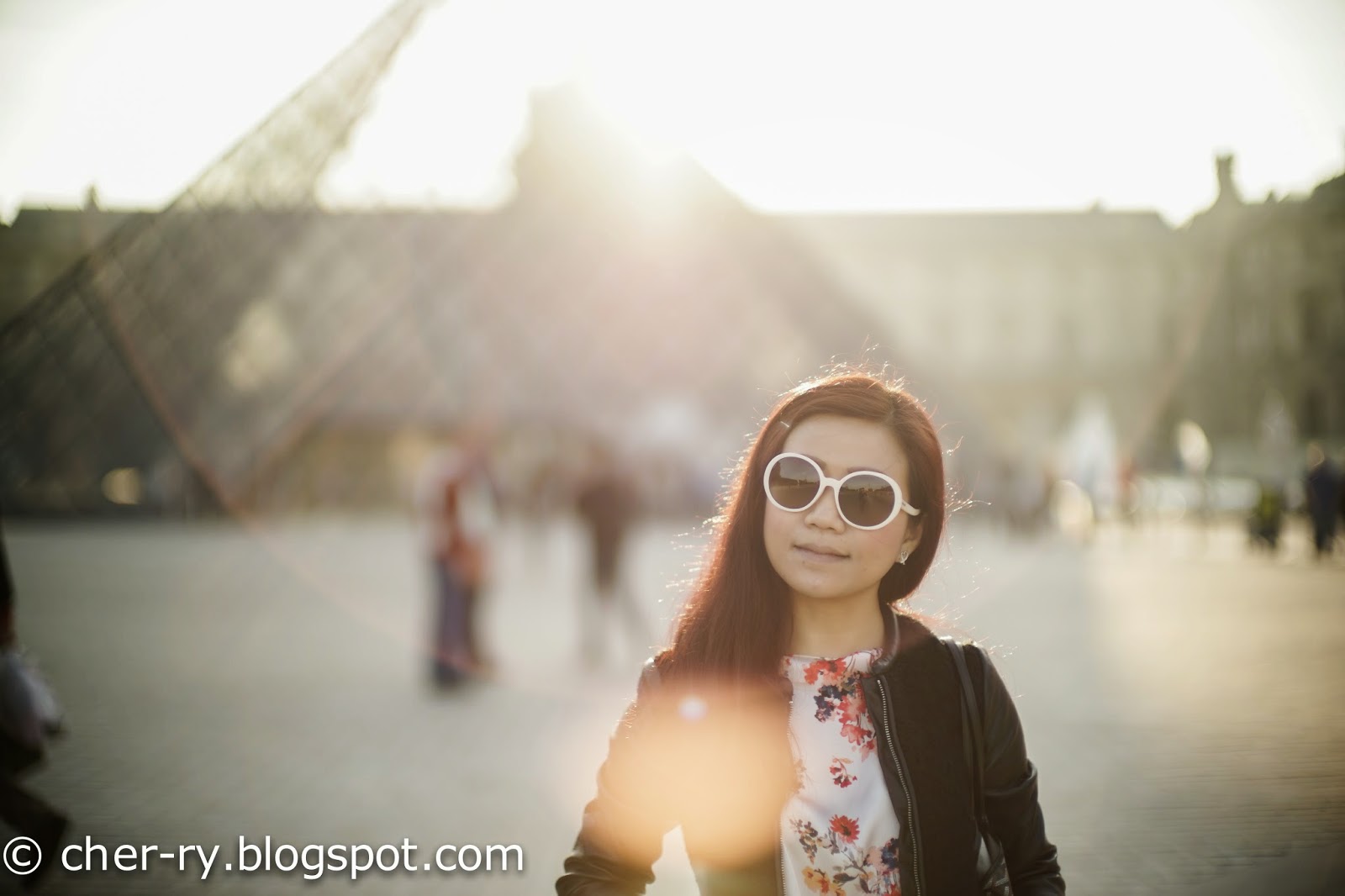 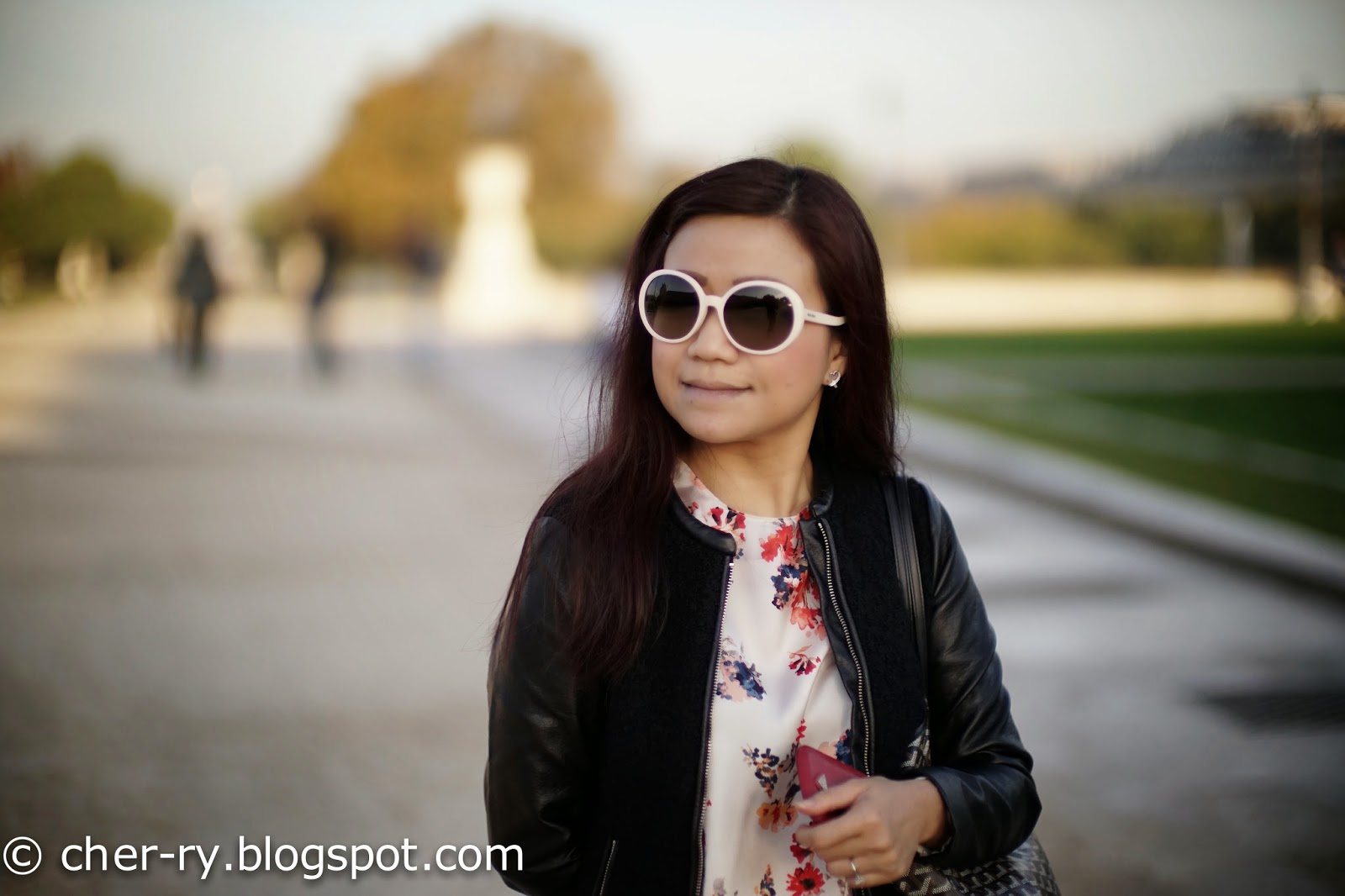 Monkey hmmmmm smile. There u go. Can I have my croissants now?" 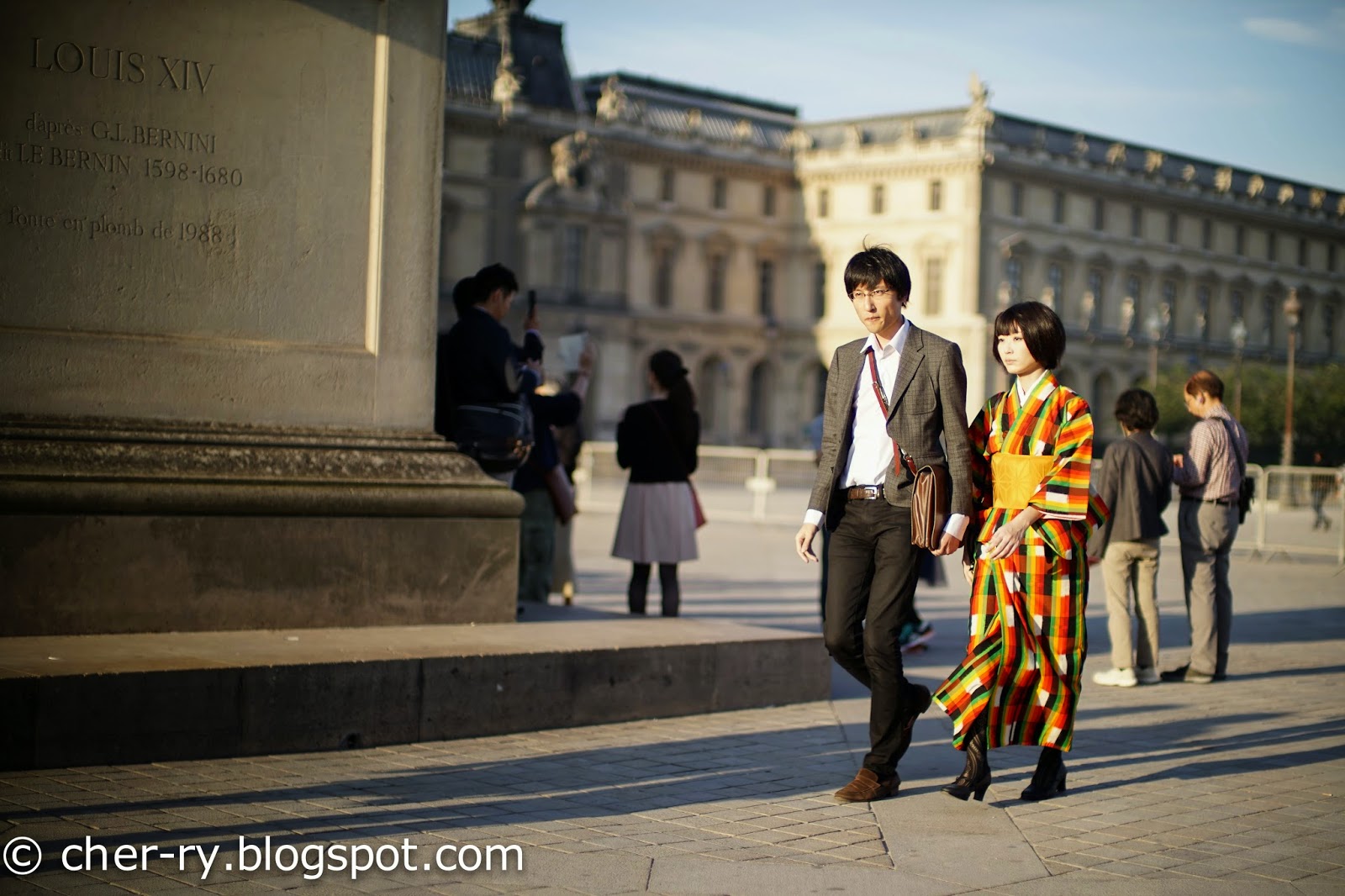 frustrated, he directed his lens at other subjects and he found his. A japanese couple with the gal in Yukata. Didn't they said that Paris is the Capital of Fashion and ppl here are really trendy? Hehehehehehe it's really nice to dress up for any occasion bcoz it makes ppl happy. Don't u agree? 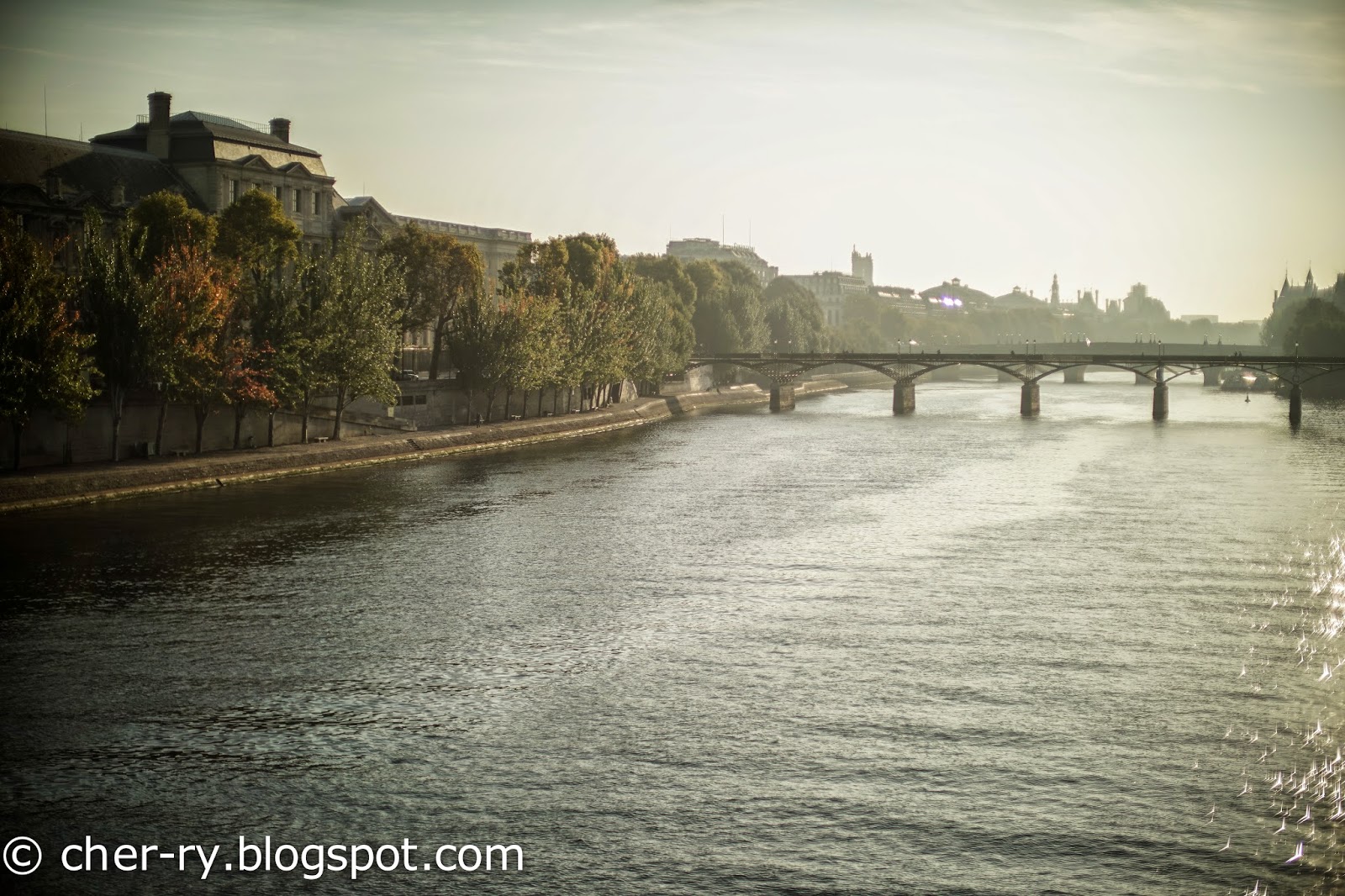 This picture provokes such emotional on me. It's exactly the same feeling when I was on top the bridge, looking at the Seine River dreamily while basking on the lovely morning sun. I wanted to scream at the top of my lungs, It's a LOVELY DAY!!!! and it's not only 9am yet. Hahahaha

It's really great to be early, bcoz the Seine River has yet to be filled with traffics. Yes traffics of tourist boats gliding up and down this river, with announcements in German, English, Japanese, CHINESE, Russian. Gosh, how tourism has driven and built this place. At the same time, damaging bcoz there's just too much of pollution and wastage in terms of human consumptions. 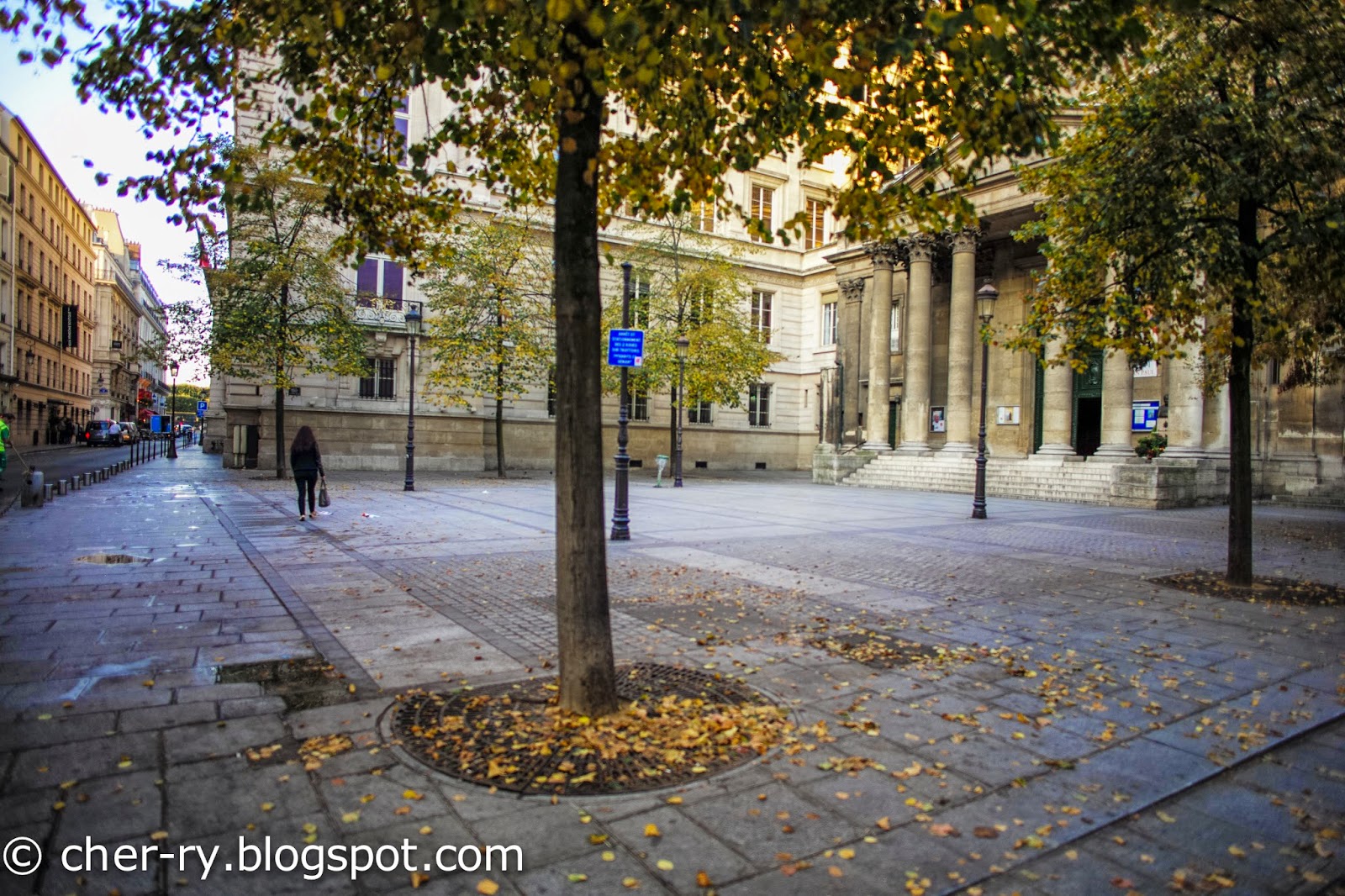 Autumn has just arrived, so the leaves were not exactly brown yet, and the trees have yet to shed that much. Otherwise the entire floor would be covered with golden brown carpet. 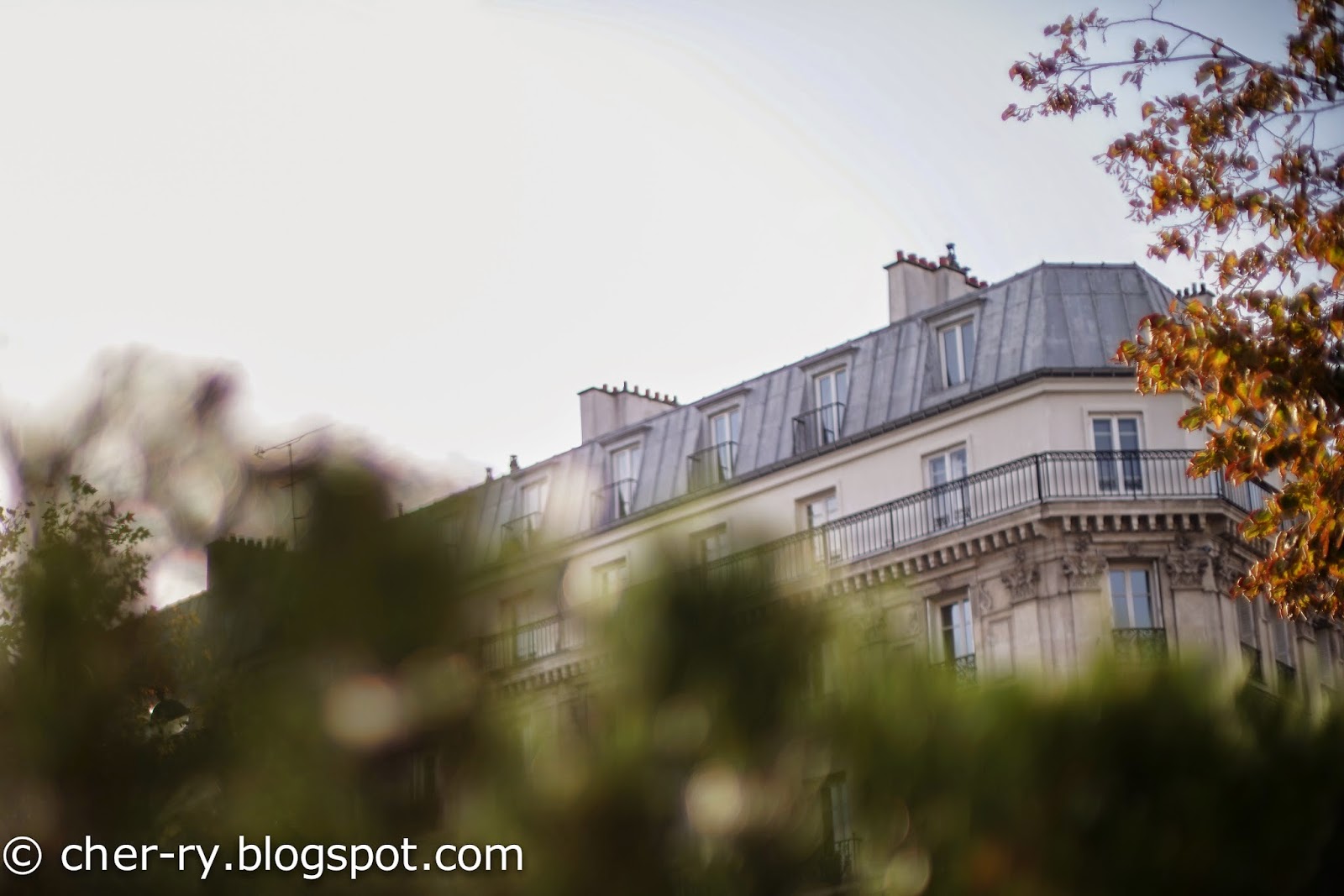 and we walked to the Left Bank of Paris, famously known as Rive Gauche. The center of Paris artists in the 19th and 20th century. Poets, Artists, Writers and politicians *didn't know that's an art?* gathered here for creativity and sense of belonging. That includes the famous Ernest Hemingway and Pablo Picasso. 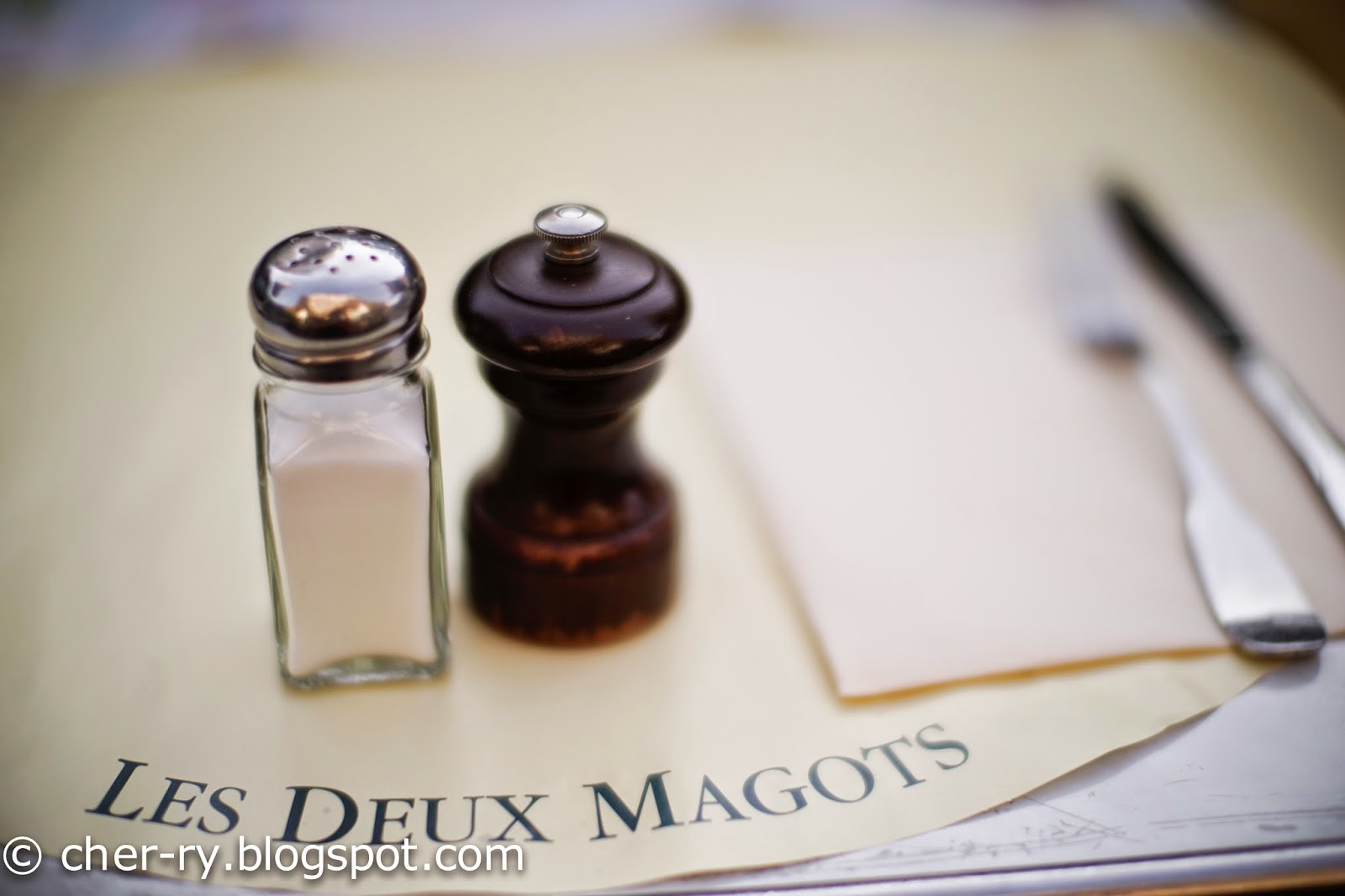 and so we headed to my all time favourite cafe for breakfast!!!! Yea tee hee hee *smiling sheepishly* my breakfast number 2 for the day. This place serves the best-est CROISSANTS in Paris :)))) 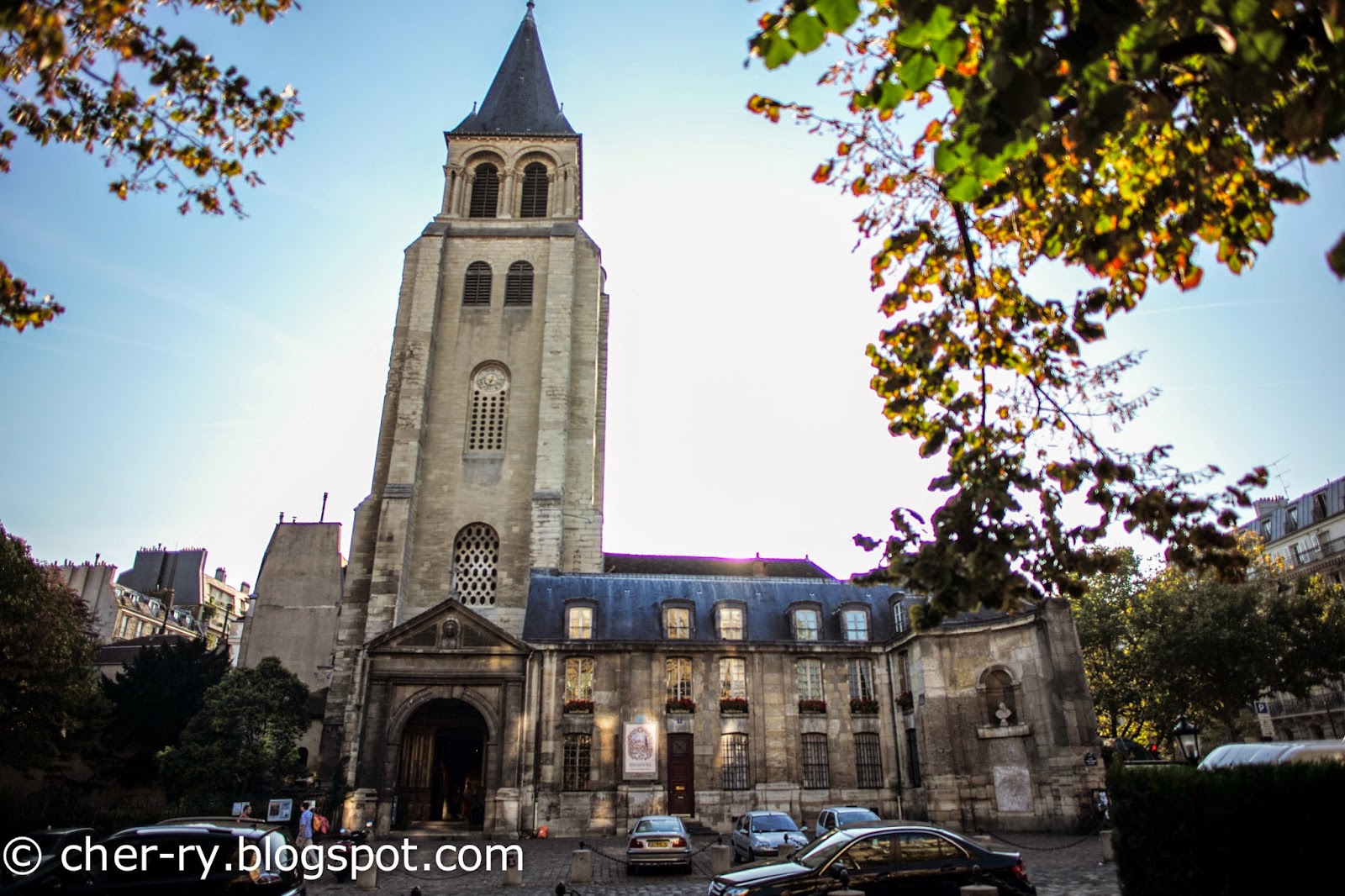 We got a nice table overlooking the Saint Germain des Pres Church. From the pic, u could see that Mr. JS has already mastered his INTO-the-SUN technique.
-_-" 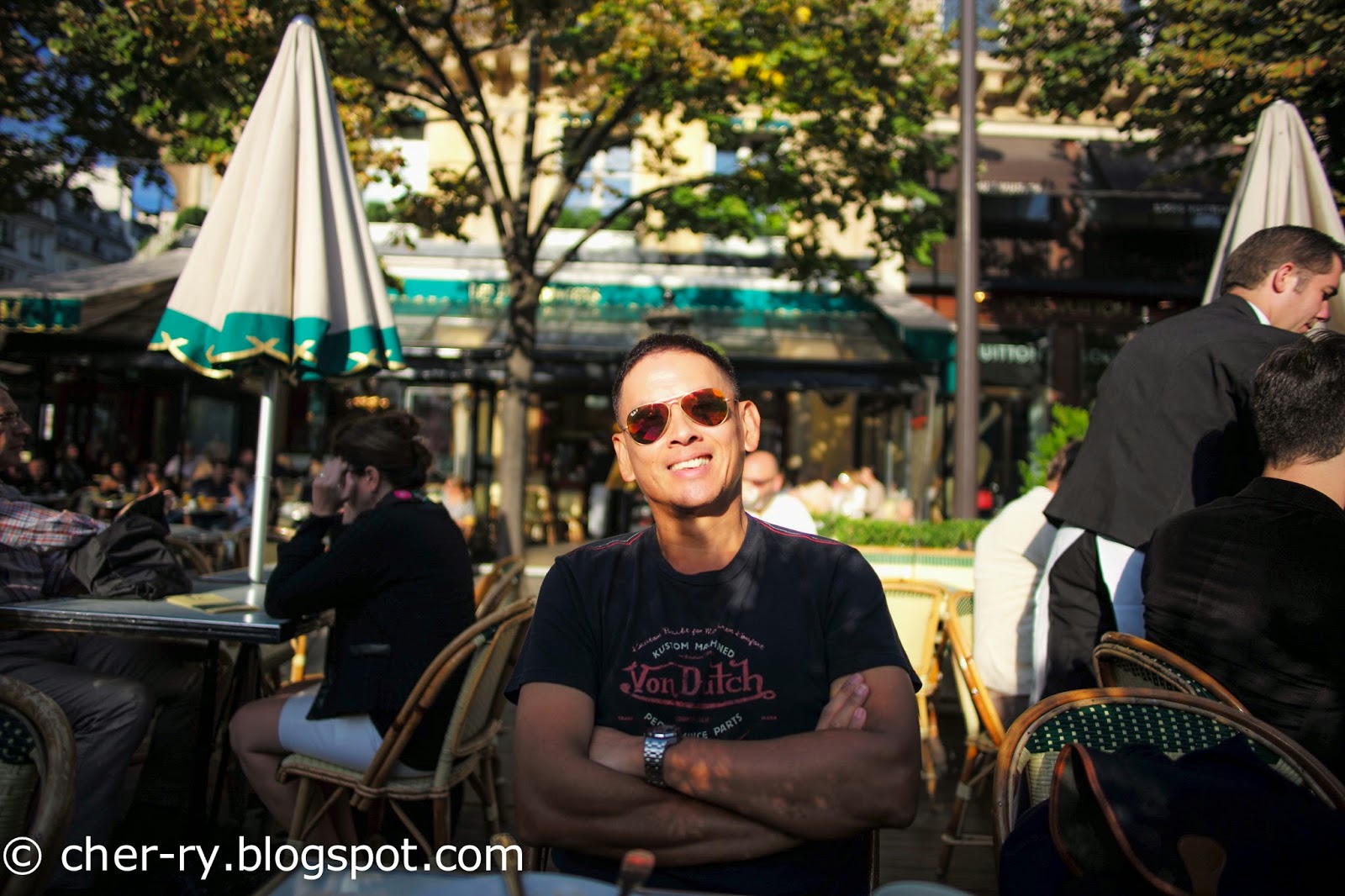 So I made him sat INTO-the-SUN!!! more like facing the sun but he has got no complains at all. The morning sun here is just so so lovely!!!! 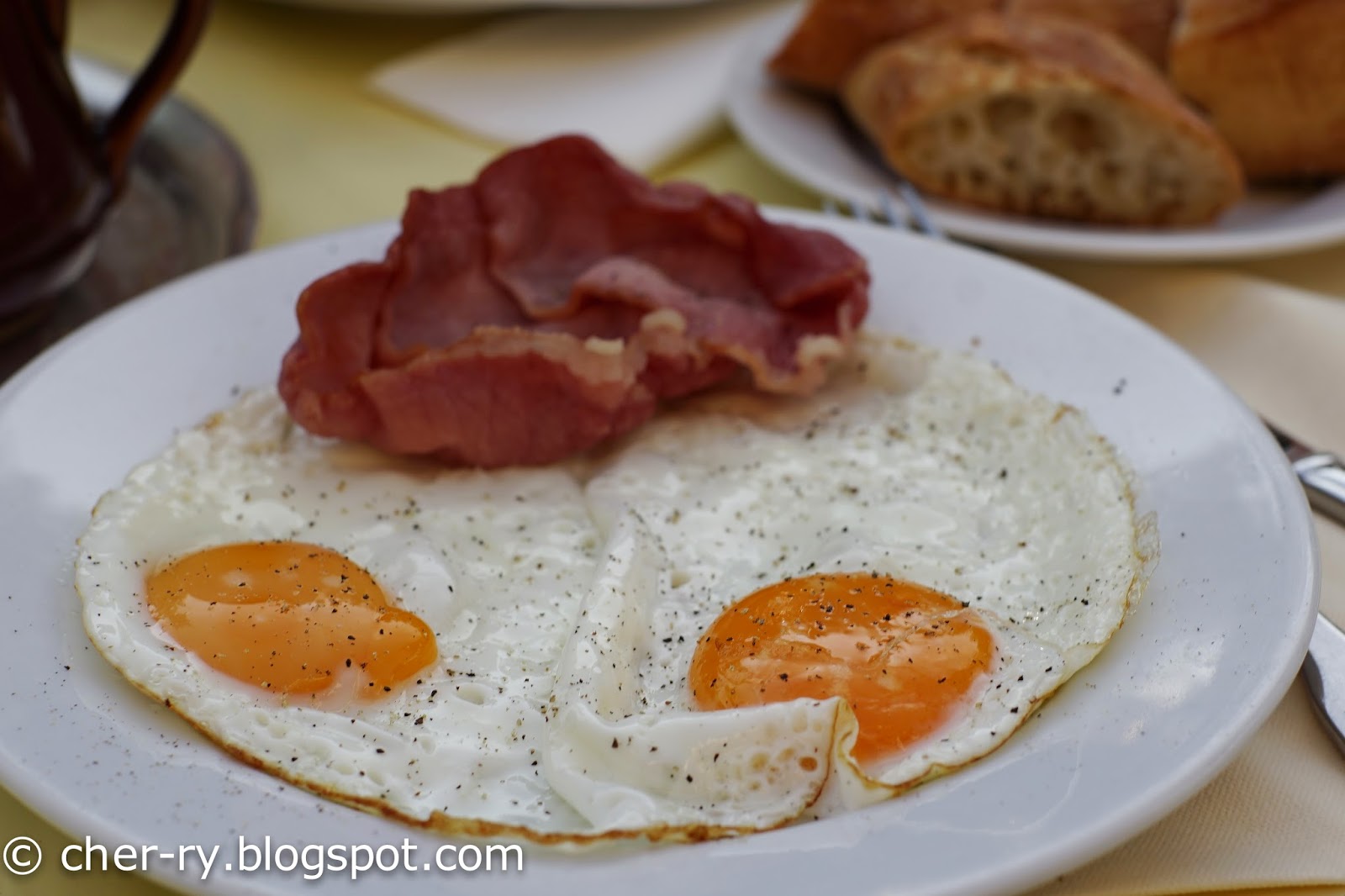 Fried eggs with bacons. Frying eggs with animal fats is the bomb!!! 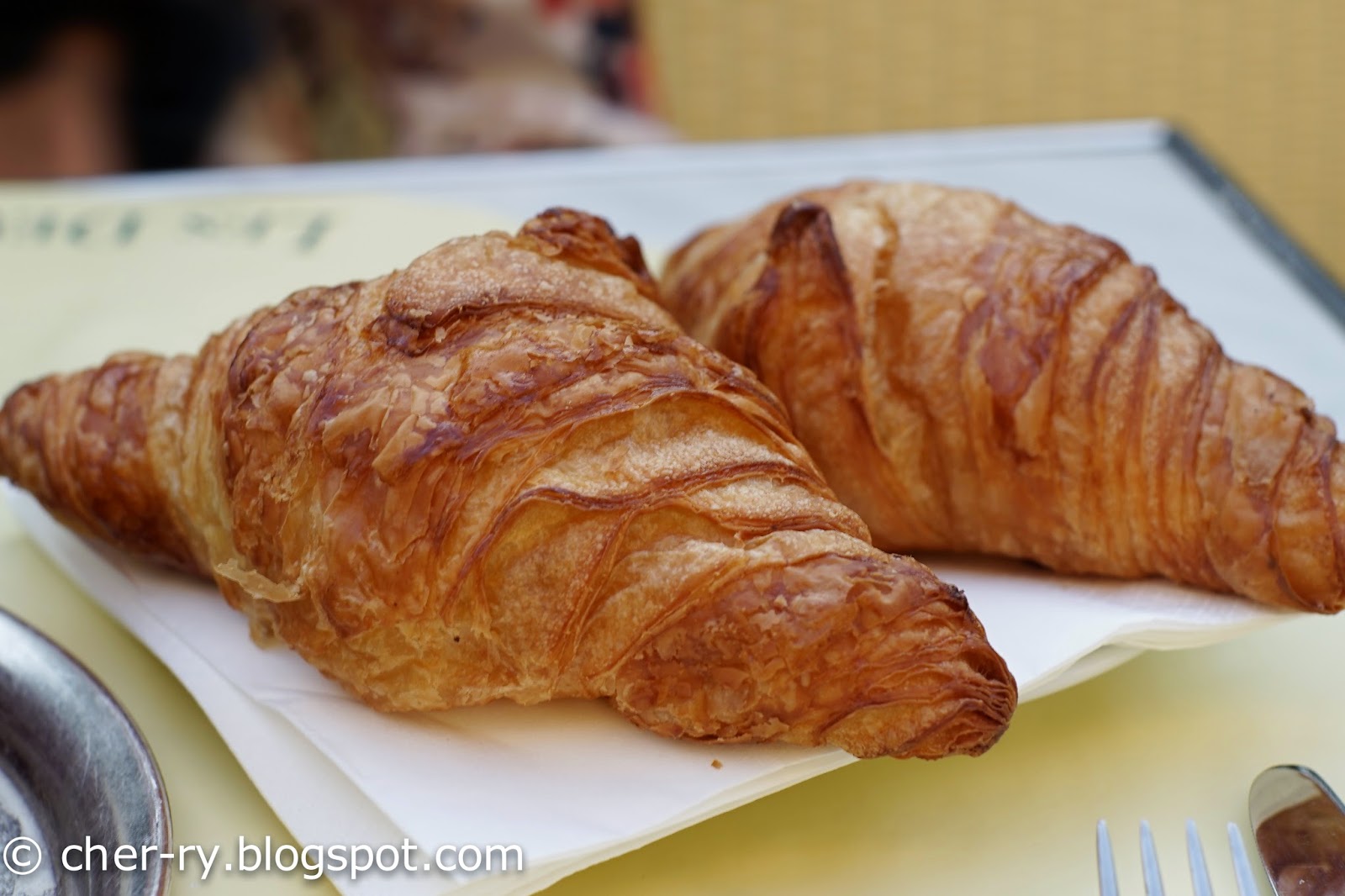 oh yumsss my love!!! Crispy Croissants with chewy inside....u r the reason I walked all the way to the left bank bcoz JS said we must burn some calories after the Nasi Lemak onboard.

Look at the crust, it's seriously so crispy you can hear it when I munch on them. Krok Krok Krok!!!! and bcoz I finished JS's share of croissants once he was done with his Bacon and Eggs, we had to order more :P 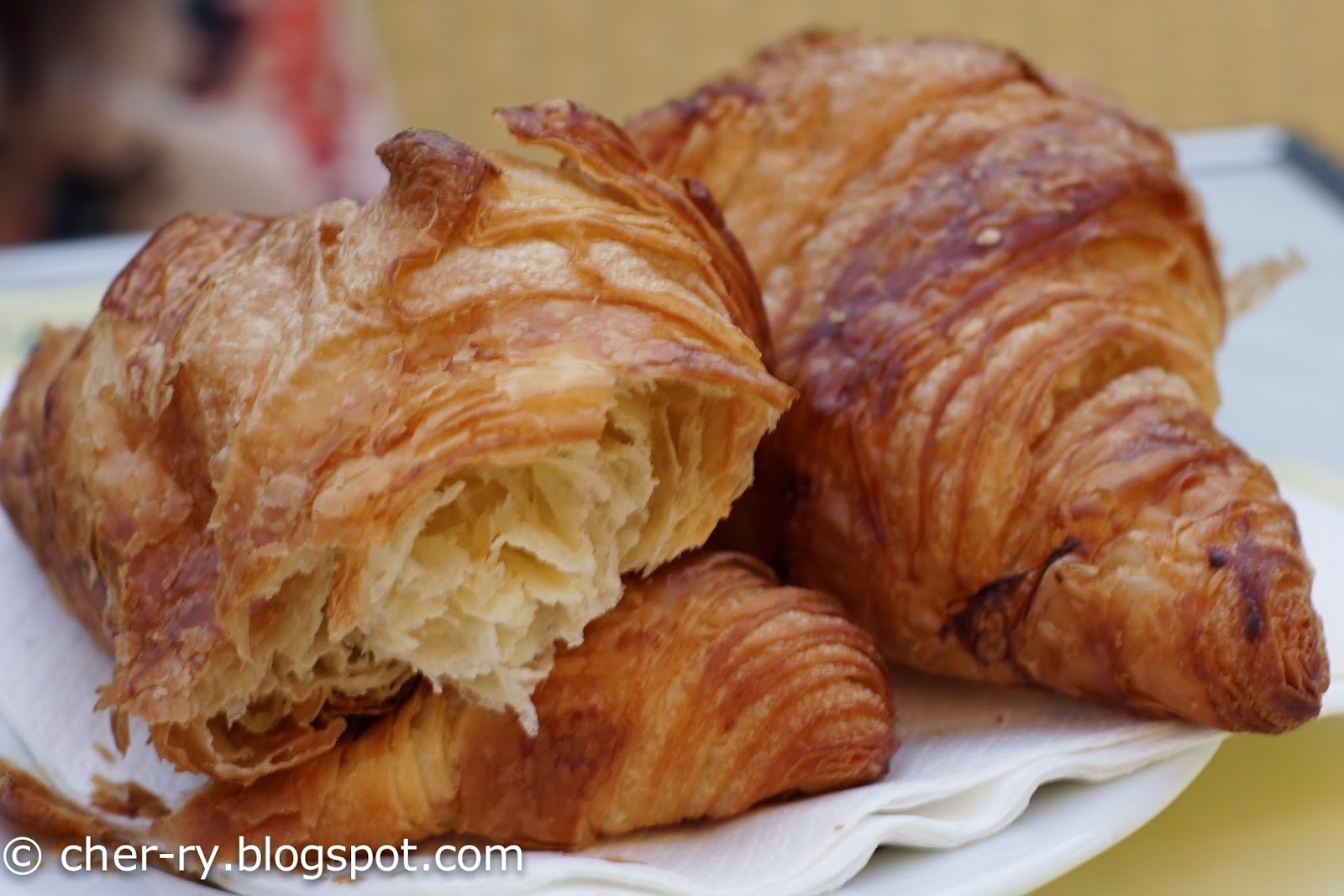 and 3 more came :))))))))))
hehehehe....Look at the flaky crust, then the soft chewy thousand layers of pastry. The texture is just great with slight sweetness to it. The secret has to be the butter and technique of rolling the dough over and over with butter quickly, so it doesn't melt. Only melts in ur mouth I guess :))))))

We have eaten at so many places, and nothing can come close to the croissants served at Les Deux Magots. Not even Cafe Flore which was just 2 doors away. 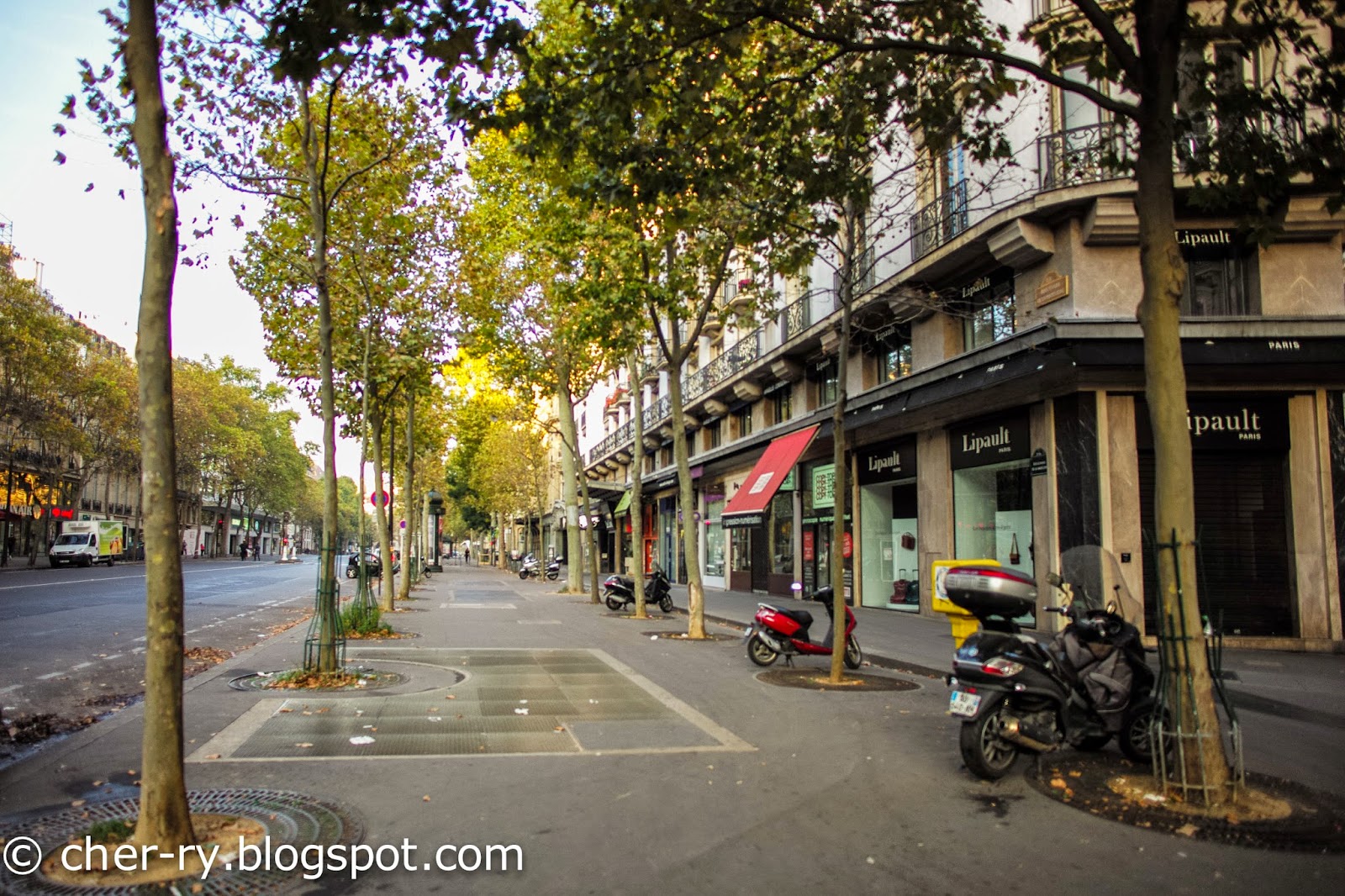 It was a Saturday, the streets were so quiet!!! Perfect for photography :))))) 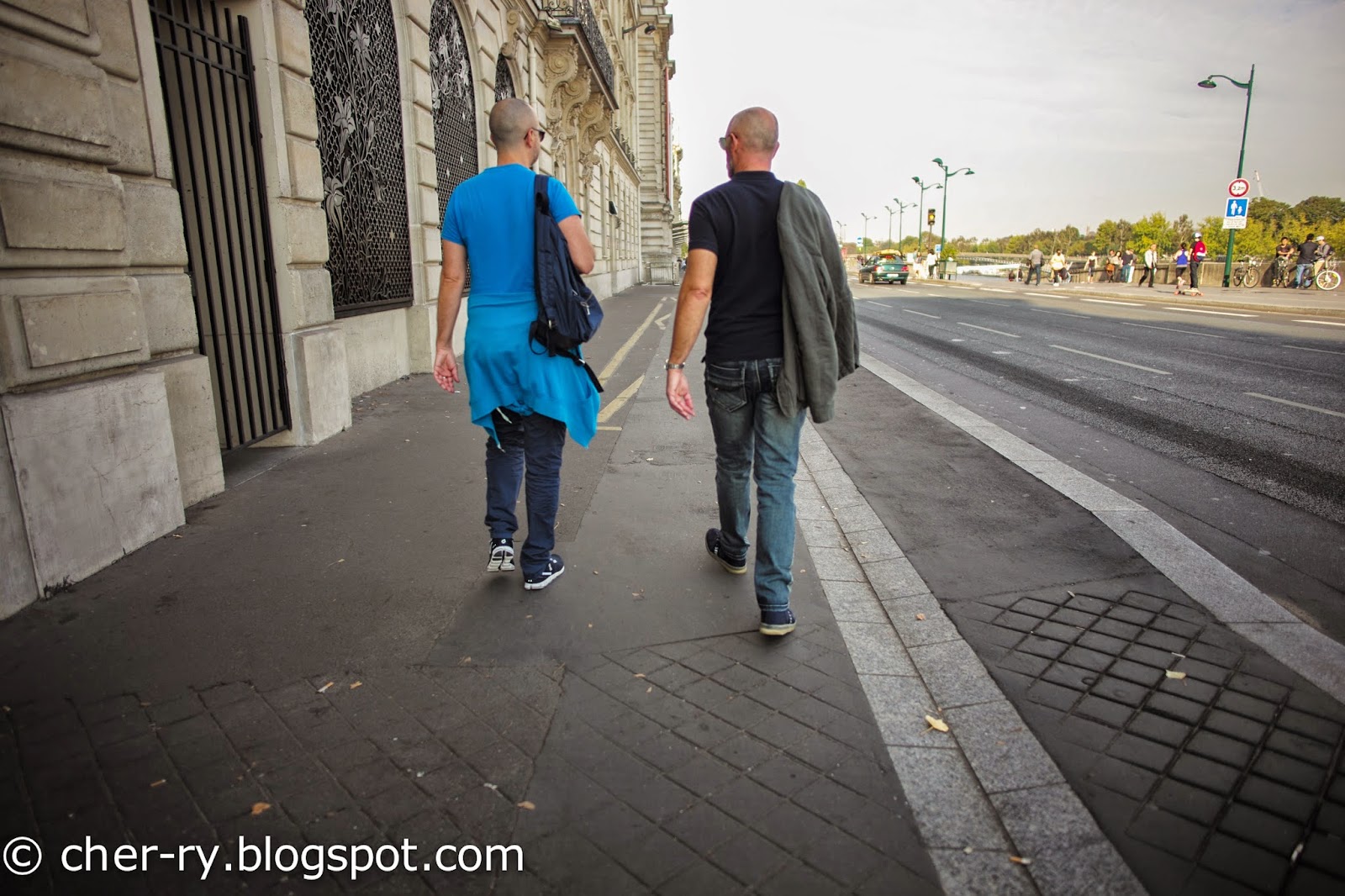 After our simple yummy breakfast with amazing coffees, we were downing cups after cups to the amazement of the Garcon, we walked over to Musee d'Orsay and got ourself drenched in the emotions and love painted by Vincent Van Gogh. Also I was happy that I found pieces that I've longed to see at the museum. Again the beauty bout being early, there isn't a queue for tickets, and there's lesser people at the museum with zero tour groups. Otherwise u would need to queue up just to have a good view of the great works by these great painters and artists. 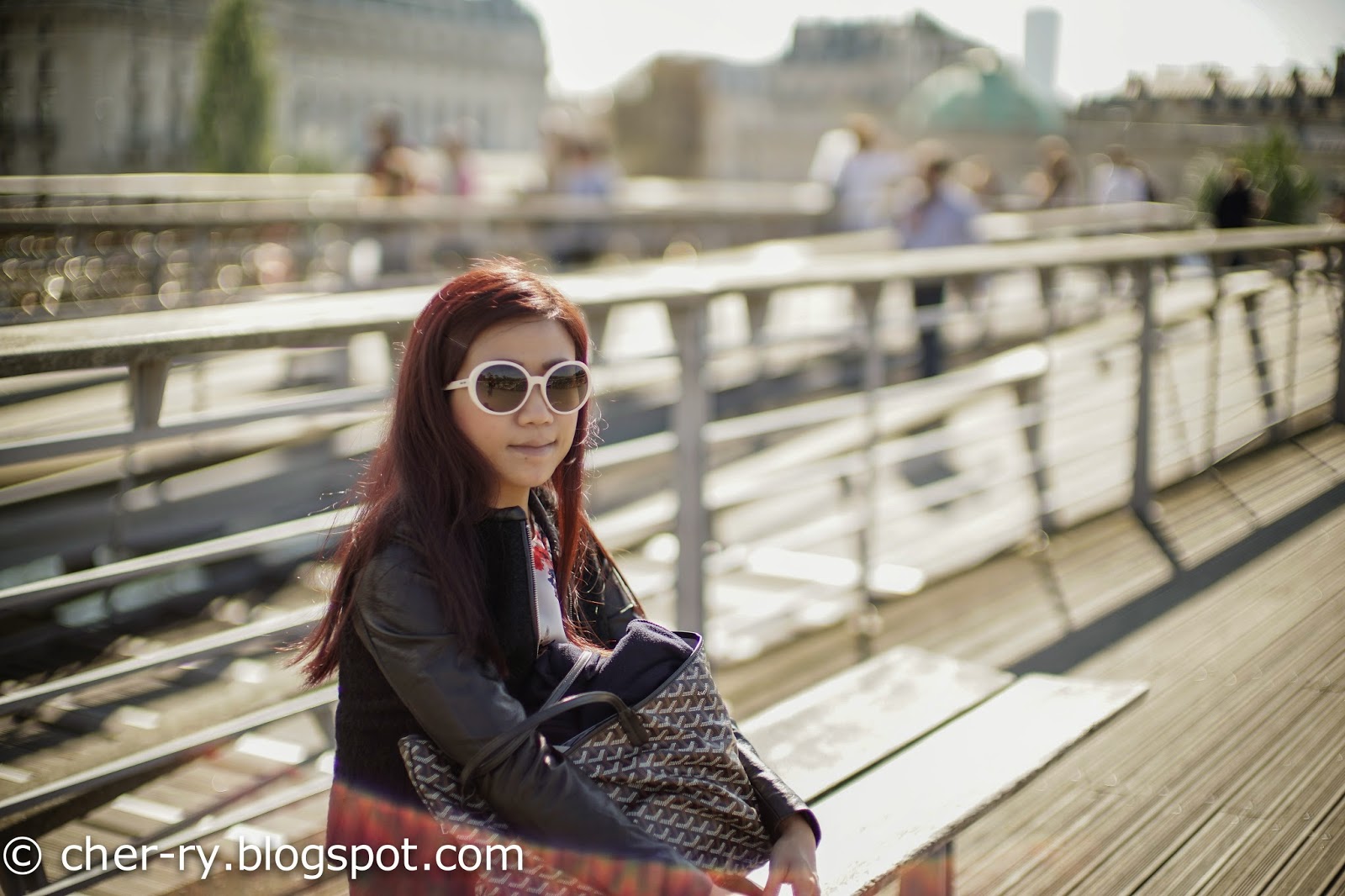 by late afternoon, we were quite done. Feeling of great achievement we walked back to the other side of Paris through the parks and reminiscence bout the last visit to the parks. 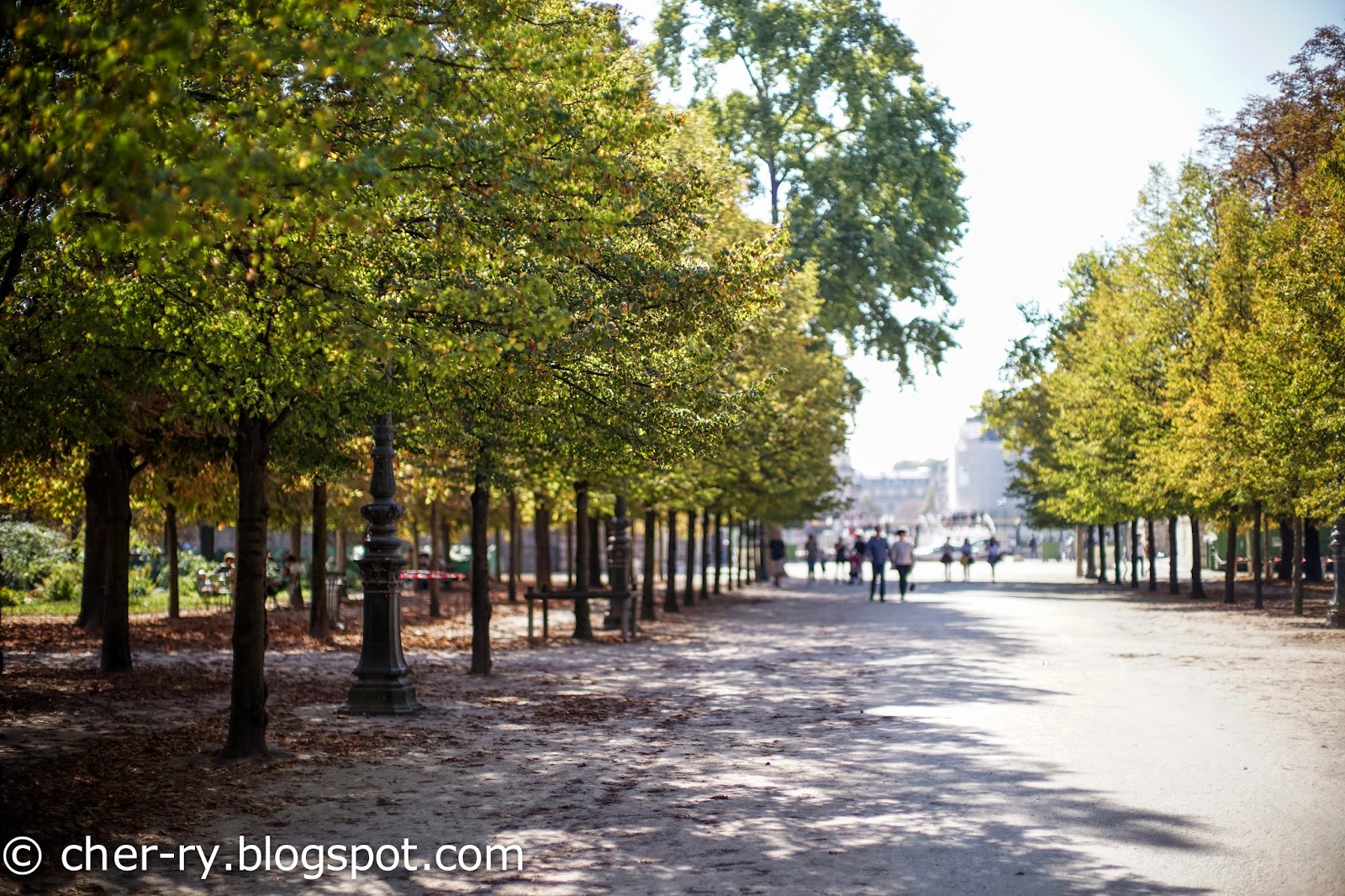 so much of greenery :))))))) I can't remember how long we sat there and talked and discussed, bcoz we've been doin this almost everyday at our vacation. Idling at the park/lake/river/sea spending time together like this is really such a leisure.

As we were basking in the sun enjoying the sounds of birds chirping, we heard another sound. Kluuu kluuu kluuuu coming from Monkey's stomach....heeeeeeeeeeeee. JS then decided we should head down to our next favourite place for a nice salad with cakes and chocolates :)))))

So tell me how not to put on weight? JS answered that quickly, that's why we need to walk as much as we could every single day, which we did for 23 days :)))))))) 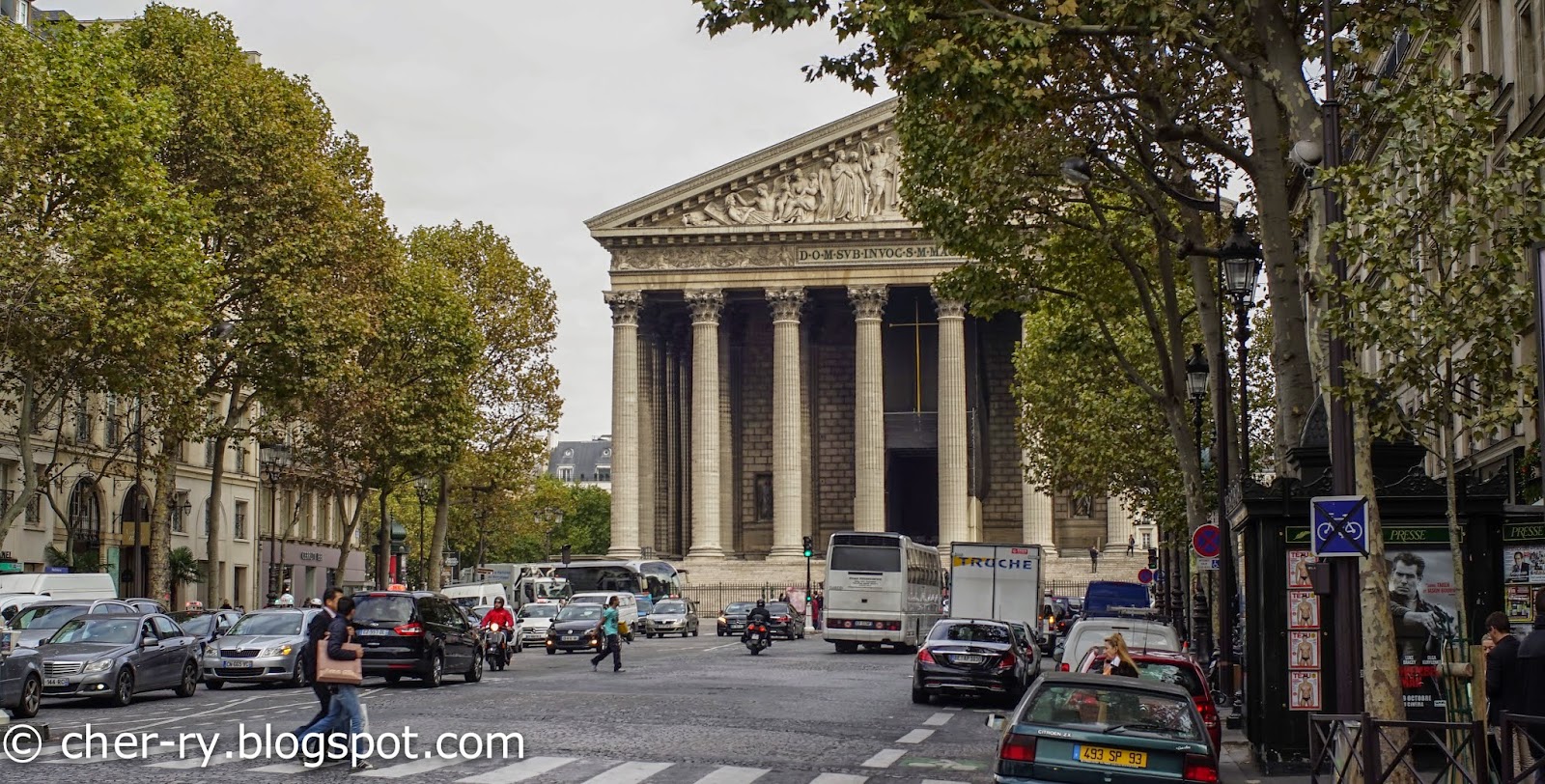 La Madeleine, a roman catholic church near to our hotel.